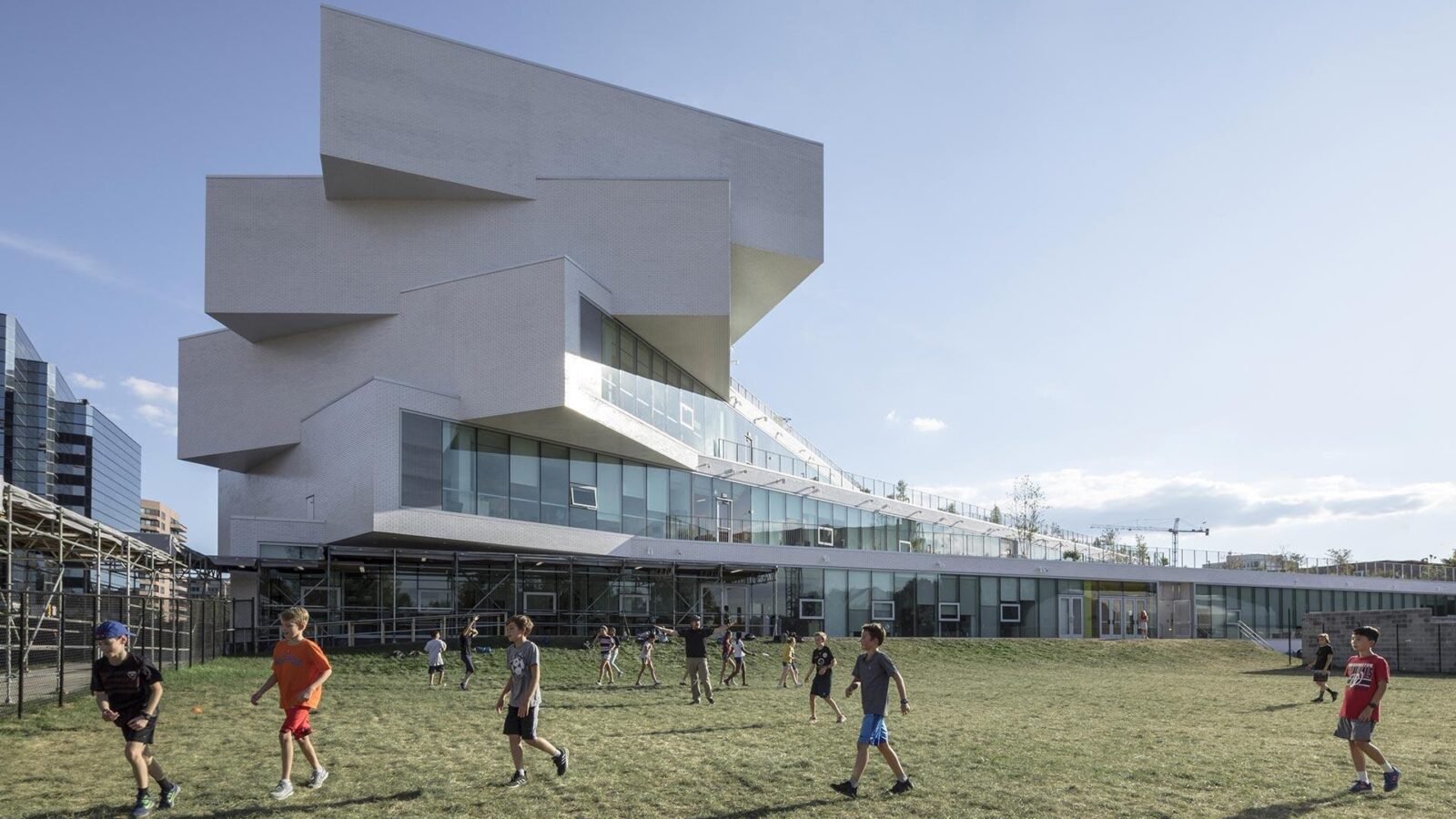 Dubbed “The Heights,” the new secondary school is a showpiece for Arlington.

According to school rankings website Niche, Arlington’s public schools are the best in Virginia. Consistently named one of the top – and not coincidentally, wealthiest – school districts in the nation, the Washington, D.C. suburb was even singled out by Forbes as as the best place in the country “to educate your children” in 2007. In other words, it’s one of the rare pockets of America where a new public school can be designed by the likes of Bjarke Ingels Group.

Dubbed “The Heights,” the recently completed school sits on the edge of Arlington’s dense urban core, where a cluster of towers suddenly gives way to a much more intimate low-rise context. The new building meets its varied surroundings with a playfully staggered presence. While a five-storey building faces the high-rises to the east, a single-storey frontage overlooks the schoolyard – and a quieter residential milieu – to the west. 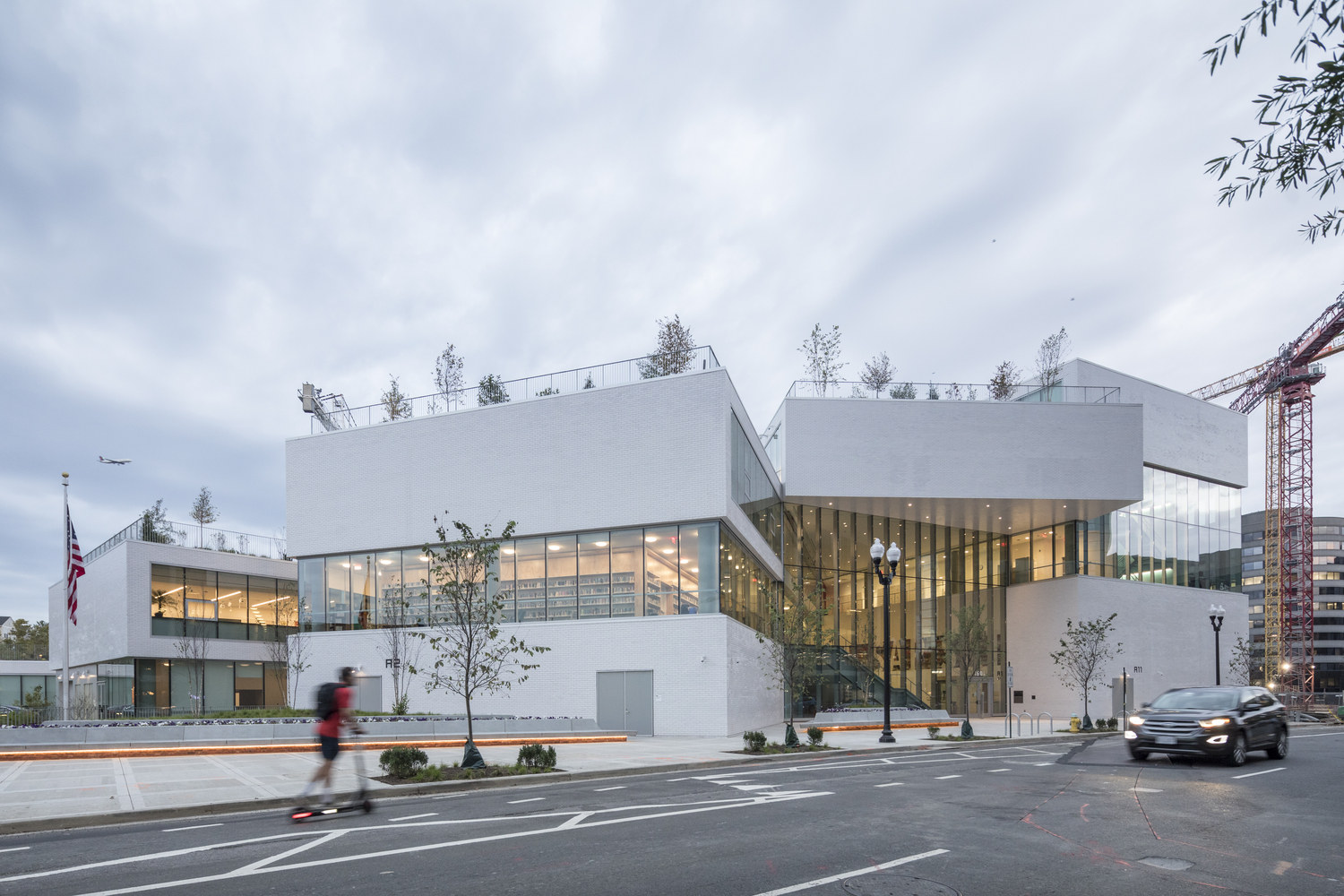 The building’s five volumes fan out from a central axis, pivoting out to accomodate a series of green roofs. From the west, it all meets the eye like the landing of some giant spiral staircase. Clad in a simple and elegant white brick – with floor-to-ceiling windows overlooking the yard – the simplicity of the façade softens the twisting drama into a more resolved, legible presence. 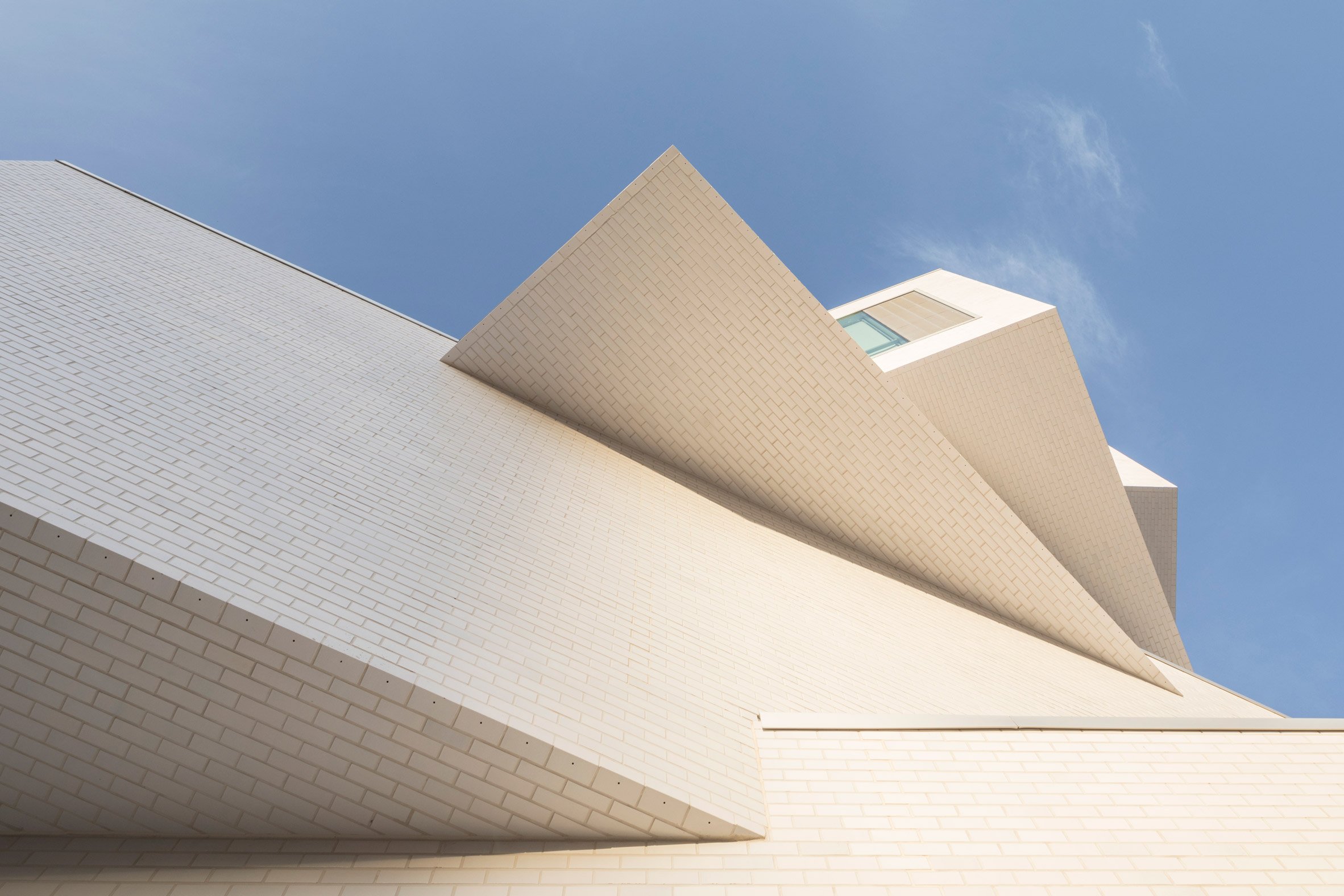 Inside, the staggered massing translates to articulated floorplates. Each level opens out to a generous green space – and a unique view – breaking down the barrier between classrooms and the outdoors. 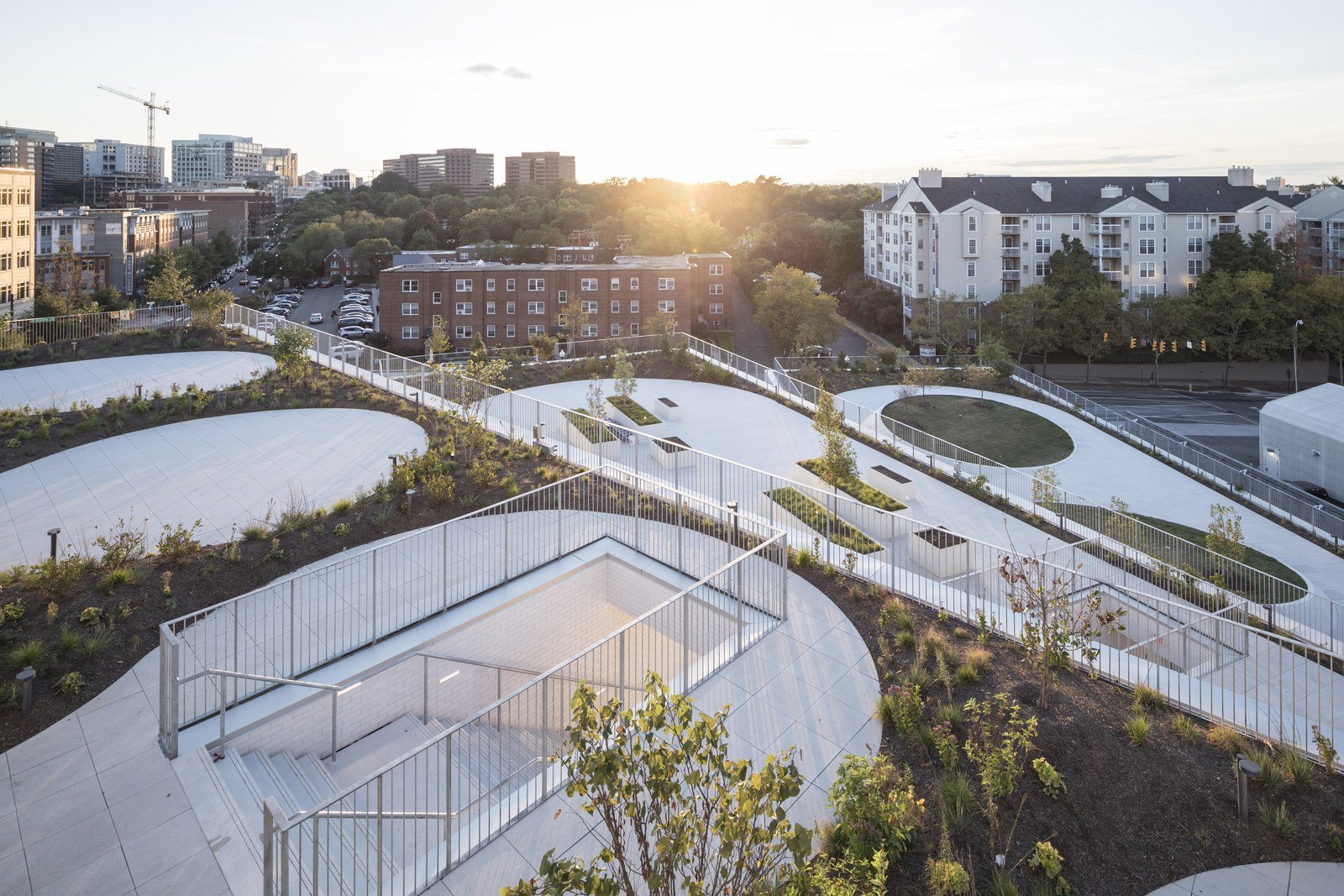 The angled floorplates also help foster a distinct identity for each group of classrooms. The effect is reinforced by the bold, solid colours that define individual rooms and corridors. In a 180,000-square-foot building with nearly 800 students, the corridors and terraces help carve out a series of cozier environments. 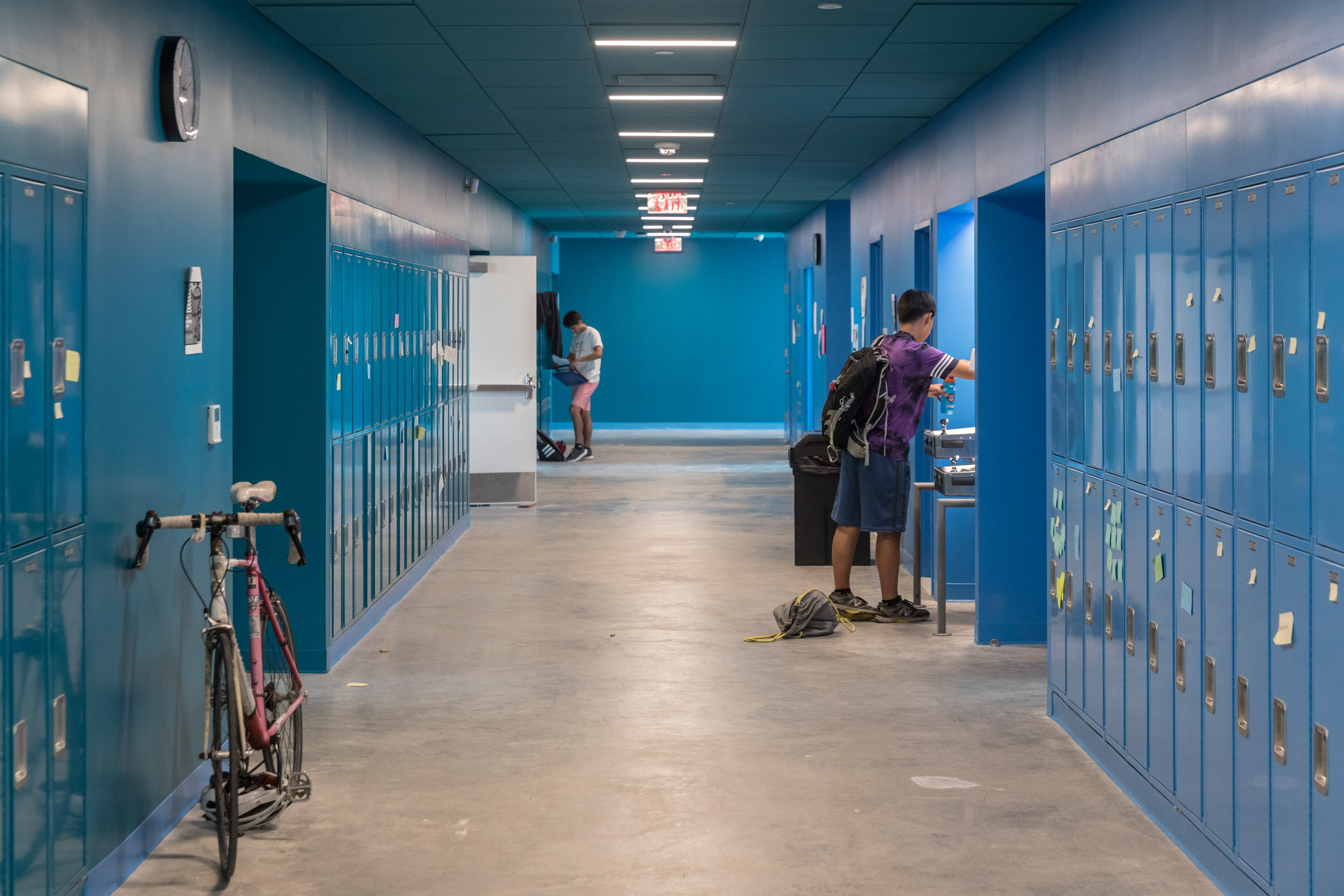 The Heights consolidates the functions of two pre-existing secondary schools, while also integrating a comprehensive special education program. Given the breadth of programming and the student population, the creation of individualized spaces helps maintain a sense of comfort and familiarity in a sprawling five-storey complex.

At grade, a triple-height lobby overlooks Arlington’s busy Wilson Boulevard, with the gym, cafeteria, and library, all clustered nearby. At the heart of it all, the flexibly designed lobby serves as an auditorium for school assemblies – as well as a venue for community events – with stepped seating that accommodates both casual and formal gatherings. It’s a rare example of a “hangout stair” with a clear purpose. 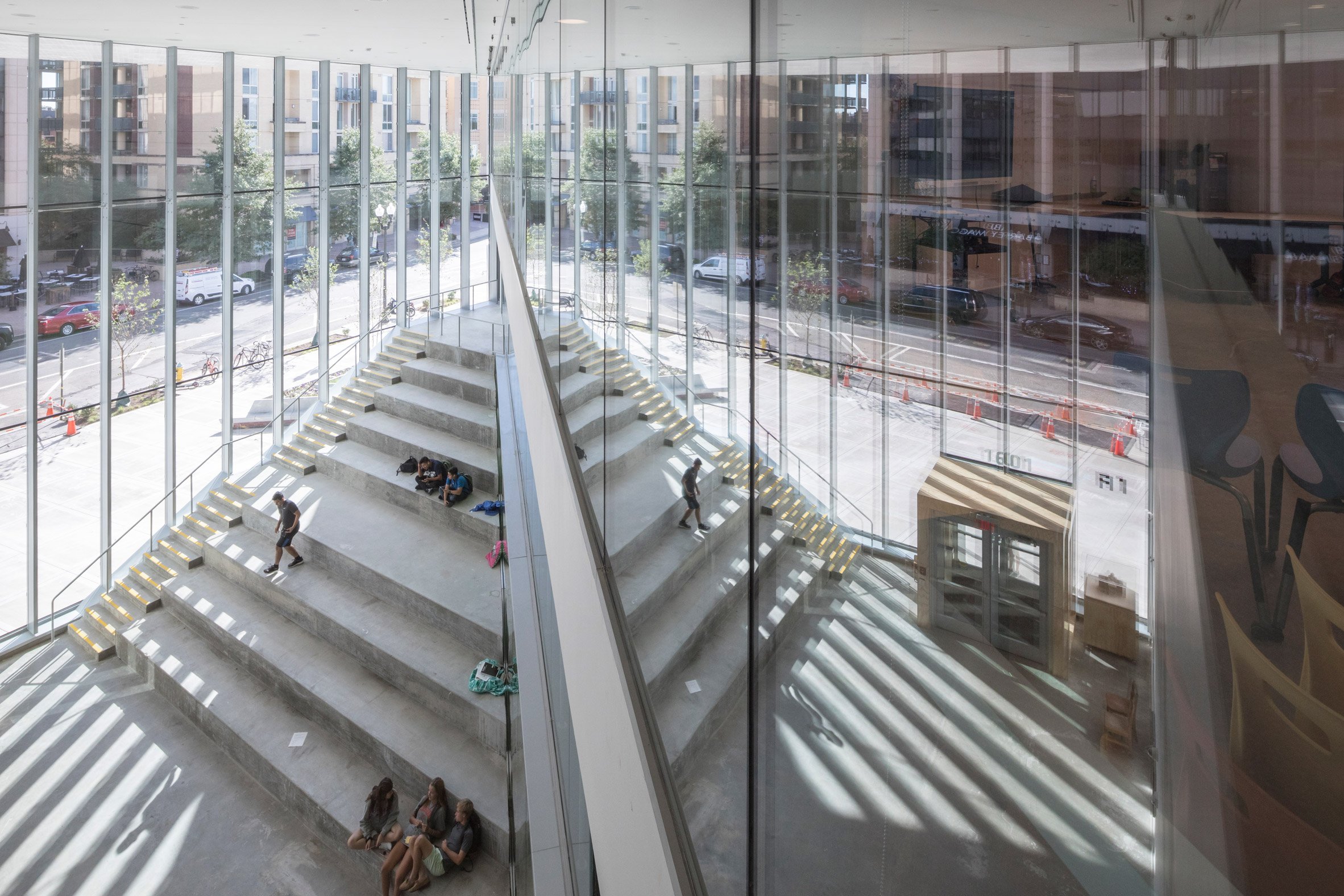 Nonetheless, the seemingly ubiquitous trend of designing “stairs to nowhere” is rightly maligned for its lack of accessibility – and lack of obvious appeal. At The Heights, stepped seating is woven throughout the building, with connections to surrounding spaces. Architecturally, the stairs also resolve the challenges posed by BIG’s unconventional massing scheme. The staggered volumes create awkward triangular corners, and staircases are a solution. But to what end?

According to BIG, “the casual stepped seating areas in the building address [the school’s] unique curricula which empowers students to direct their own courses of study and encourages independence and freedom of expression.” 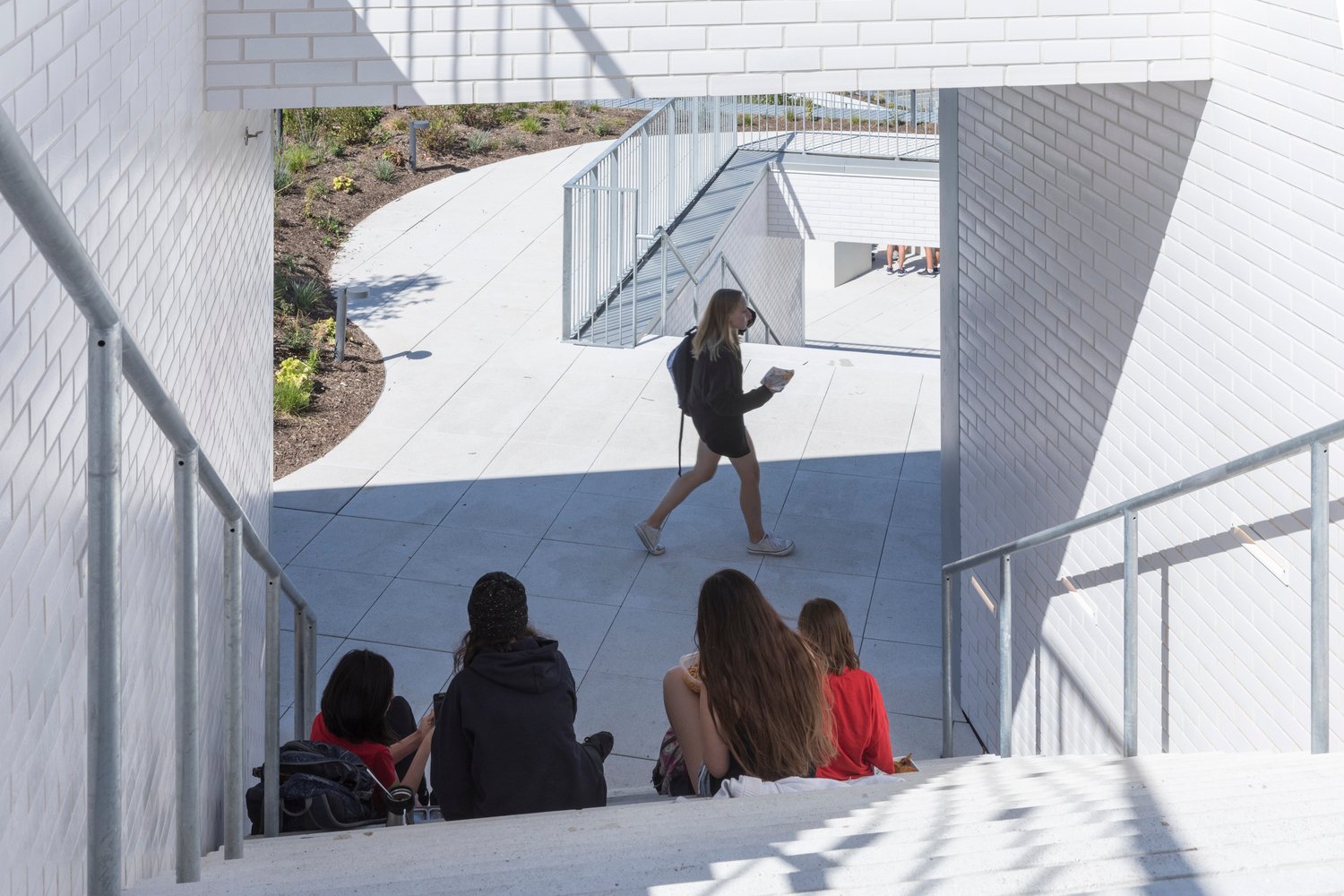 The Heights is a building that works hard to accomodate a diverse and welcoming environment, yet some of its marquee features are inaccessible. Outside, even the terraces are connected by a series of prominent staircases – again designed to double as gathering places for students. Unfortunately, while BIG’s architectural spectacle fosters attractive learning environments, it also emphasizes the importance of exclusionary (and somewhat pointless) spaces. 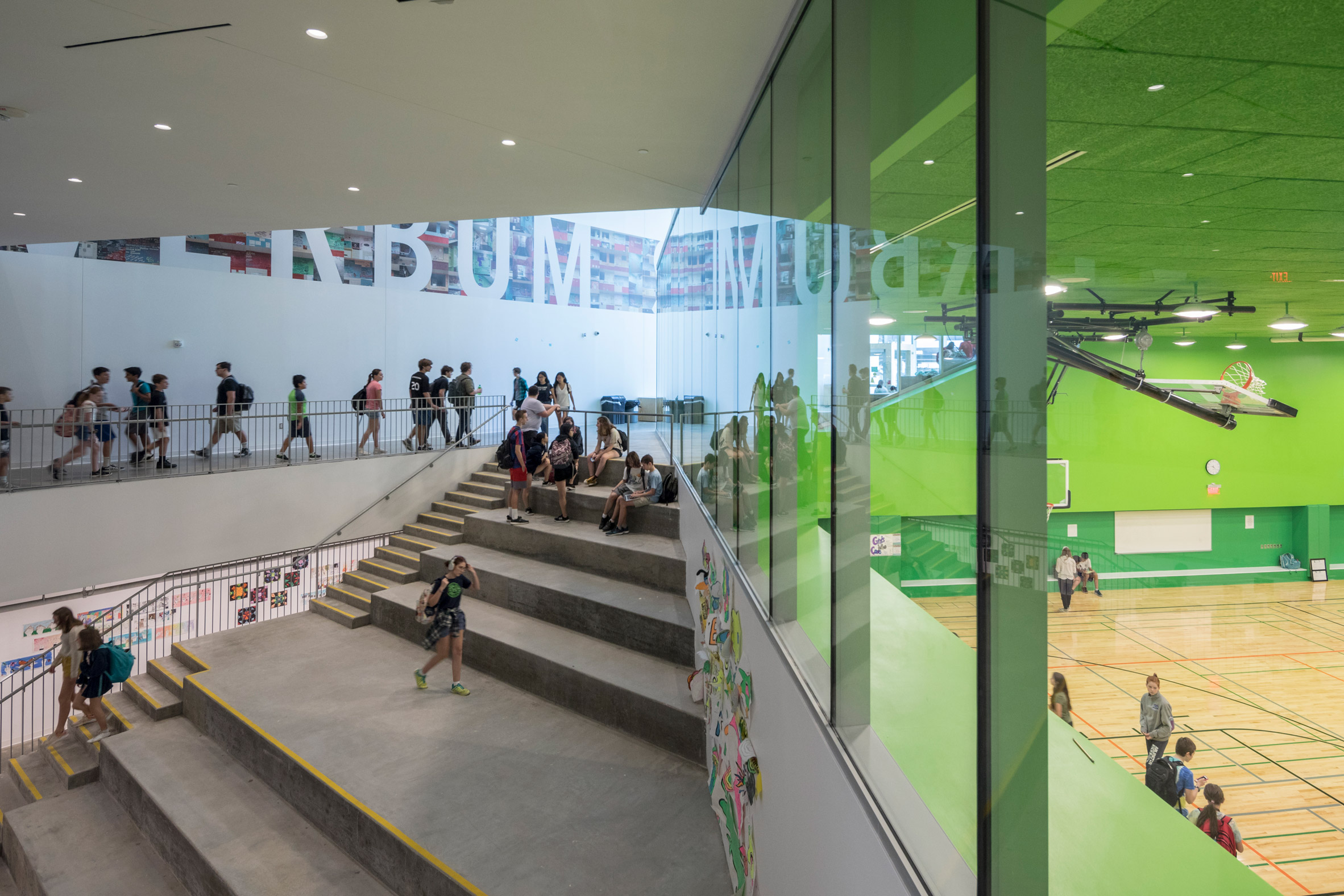 Still, in an era of active shooter drills and near-militarized school safety protocols, the building’s public-facing openness is a welcome counterpoint to the hermetically sealed environments that define public schools across the country. The Heights is an attractive and welcoming place – and one that would be made all the better for welcoming everyone.

Dubbed “The Heights,” the new secondary school is a showpiece for Arlington.