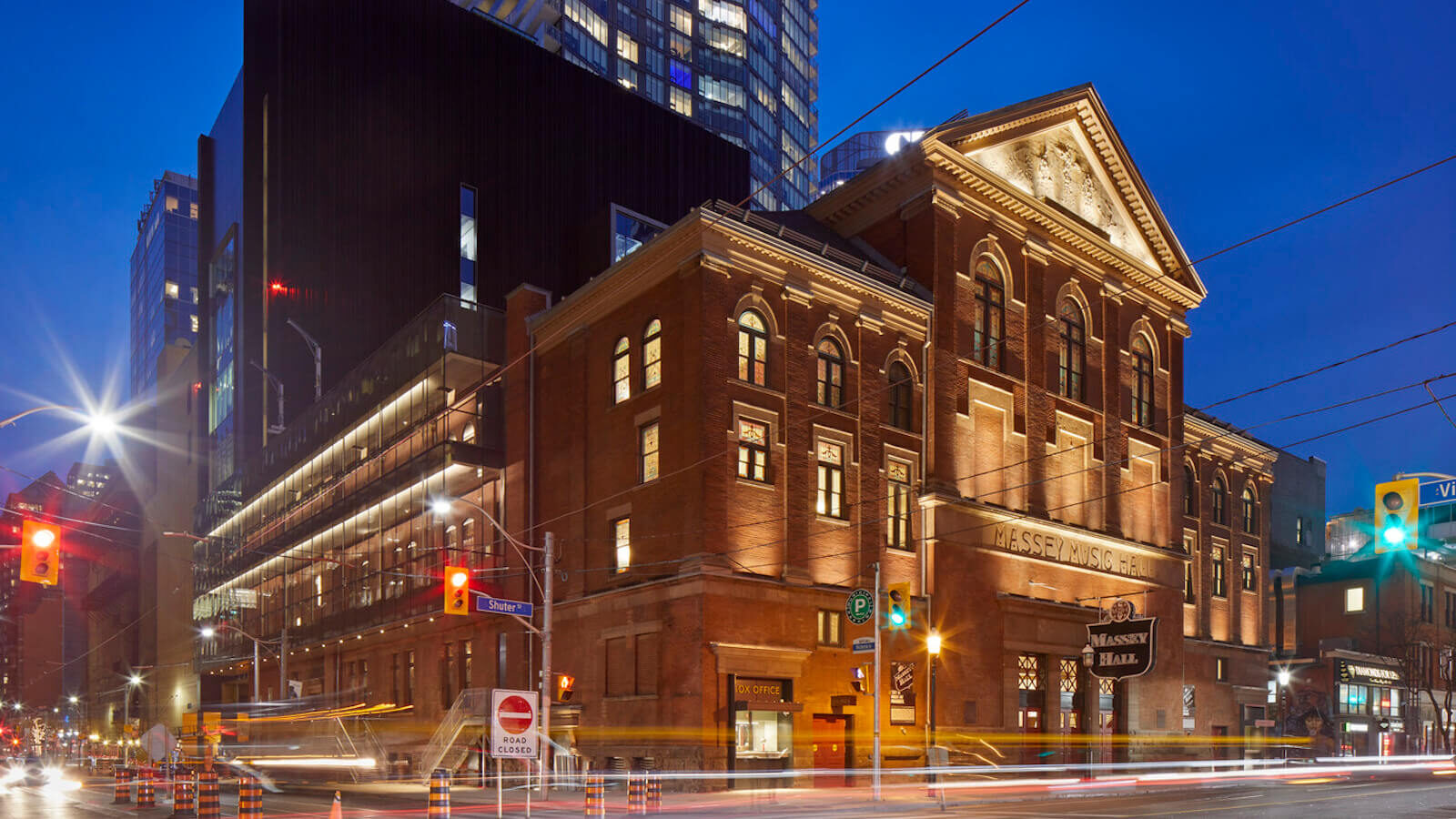 Like the secret recipe for keeping a marriage exciting — long after the spark is gone — refreshing a heritage building takes tireless work, compromise and reimagining the original romance. Massey Hall, often called the Grand Old Dame of Shuter Street, in downtown Toronto, is one of these historic buildings. Torontonians, and Canadians from sea to sea, have fallen in love with this beautiful edifice since it opened in 1894.

“Massey Hall is such a positive and bright shining light in the city,” says Marianne McKenna, founding partner at KPMB Architects, the lead designer on the recent $184-million revitalization of the 127-year-old building.

When the philanthropist Hart Almerrin Massey gifted the building to the city of Toronto, he wanted his cathedral of the arts to be a place for the people. Massey hired Sidney Rose Badgley, a prolific church architect, as the lead designer. Like all love affairs, the initial excitement and passion surrounding this gift that keeps on giving has at times waned in the ensuing decades. But, through all of the debates between various politicians and community groups arguing for–or against–its demolition, Massey has somehow remained.

Now, thanks to the recent multi-year revitalization, led by KPMB Architects, working in a collaborative partnership with the Corporation of Massey Hall/Roy Thomson Hall and dozens of consultants, including GBCA (Goldsmith Borgal and Company Ltd. Architects), Charcoalblue, Sound Space Vision, Engineering Harmonics, and Entuitive, to name just a few, the communal affection for this iconic building and link to our collective past shines bright again and will remain for at least another century. 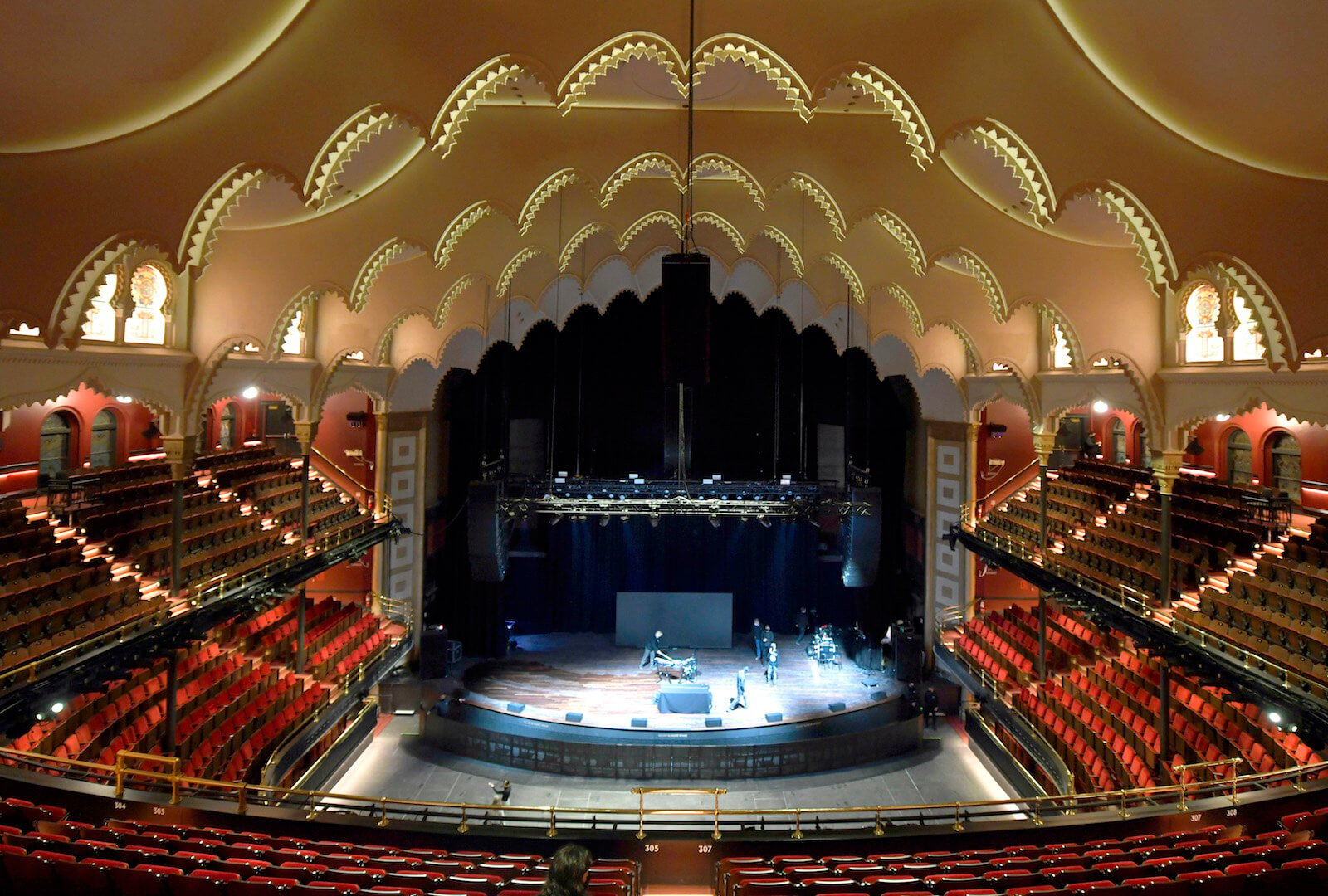 The philosophy behind this multi-year, multi-phase revitalization was “change nothing, improve everything.” As Grant Troop, vice-president of Operations for Massey Hall/Roy Thomson Hall puts it, “Our number-one priority – and benchmark for success – was to preserve the sanctity of the hall. We didn’t want to mess with anything that would change the intimate connection between audience and artist and make the building feel like it was no longer Massey Hall.

“I refer to the challenge as solving a Rubik’s Cube,” he adds. “We had to turn each part of the functional plan of the building that would each address some problems, but at the same time not pull the rest out of whack.”

1933: The lobby refurbished in an Art Deco style and enhanced with a diamond pattern marble terrazzo floor; the building’s red-and-black motif exterior, synonymous with the hall today, was also introduced. Six rows of seats were removed in the lower gallery to create a smoking lounge.

1948: The stage was lowered and the wooden floorboards were replaced on the stage, in the basement and in the orchestra, reinforced with concrete.

1955: A chunk of plaster falls from the ceiling and the entire ceiling is reinforced with wire mesh.

1973: The City of Toronto names Massey Hall a Heritage Site.

1989: Air conditioning installed to coincide with the seven-month run of Cats.

1994: Centuries bar opened in the basement to celebrate the hall’s centennial.

2015: Tricon Capital and Mod Developments gift 445 square metres of land to the south of the building to the Corporation of Massey Hall and Roy Thompson Hall, giving Massey the land needed to build proper back-of-house facilities and more patron amenities and services.

2021: On November 24, the revitalized main auditorium reopened with a sold-out concert by Gordon Lightfoot.

The reimagining was a resounding success. The complicated puzzle was solved thanks to innovative design and engineering, which facilitated necessary changes — including improved accessibility, enhanced acoustics and the return of heritage elements such as the original Art-Nouveau-style stained-glass windows (nearly 100 of them) and the Moorish arches on the ceiling of the hall. As McKenna told the media on November 23, during a sneak-peek the night before Gordon Lightfoot headlined the reopening night: “We didn’t disneyfy it!” 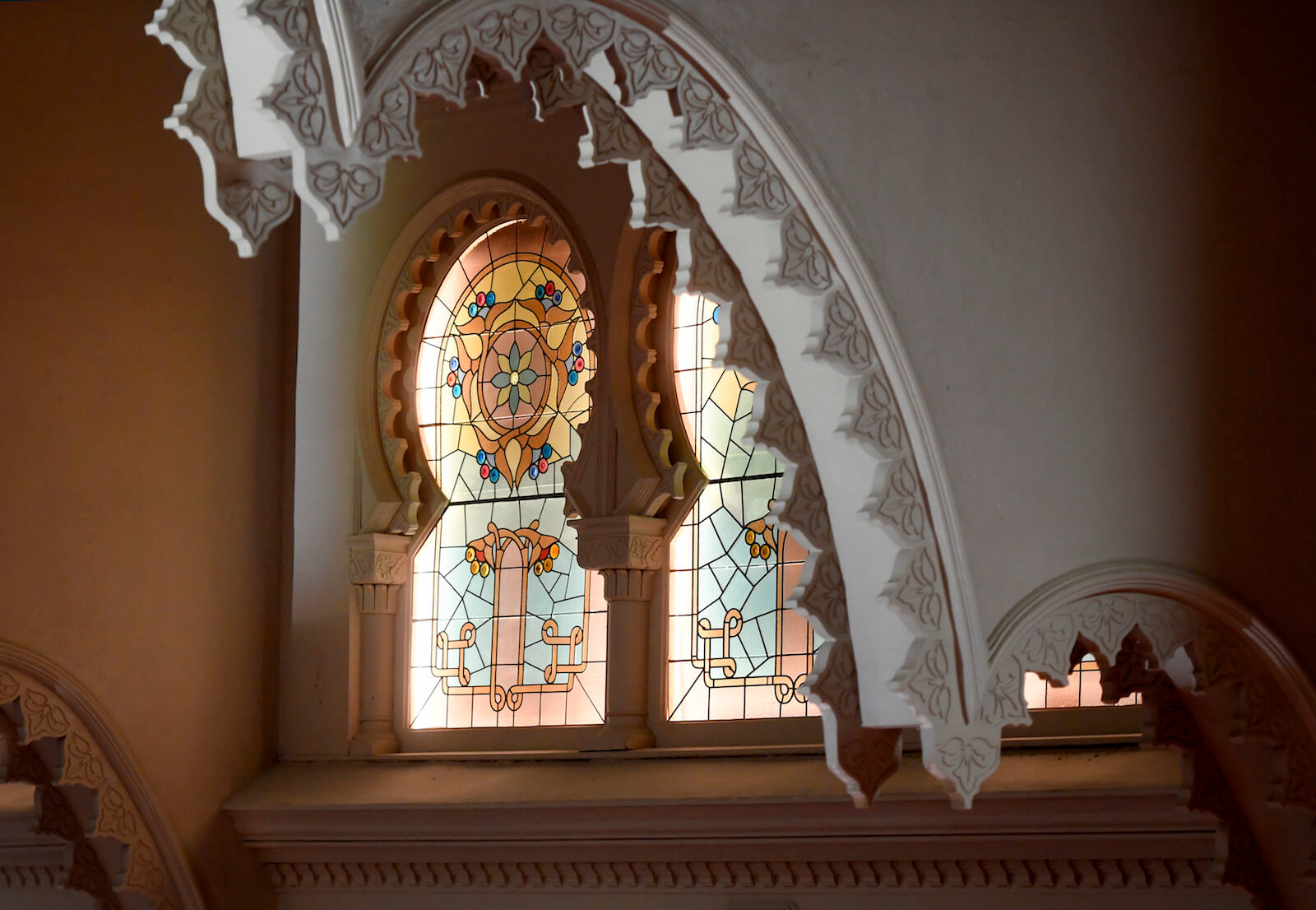 Instead, KPMB examined all the fragments and minute details added over the hall’s history. They debated each and every design decision together with other experts to retain the magic that patrons have always felt each time they walked through those three red doors. The goal was to bring the building into the 21st century by modernizing it and enhancing the ambience while staying true to its legacy. No easy feat. And, not one that happened overnight.

Marrying the Old and the New

McKenna presented her first sketch to the Corporation of Massey Hall/Roy Thomson Hall back in 2012 — sharing her vision of how the old and the new could one day combine to make the building truly shine. “As a firm, when we get our teeth into something, we don’t let it go,” she says.

For more than a decade now, the Officer of the Order of Canada recipient has lived, breathed, and dreamed this project. Massey Hall features a mix of design schools: from the Palladian-revival style of architecture on the exterior to the original interior Moorish elements (inspired by the Alhambra Palace in Spain) and the Art Deco elements added to the lobby in the 1930s. Finding a way to integrate, preserve, and bring all of these diverse styles together and concurrently modernize a building erected more than 125 years ago was definitely a challenge. 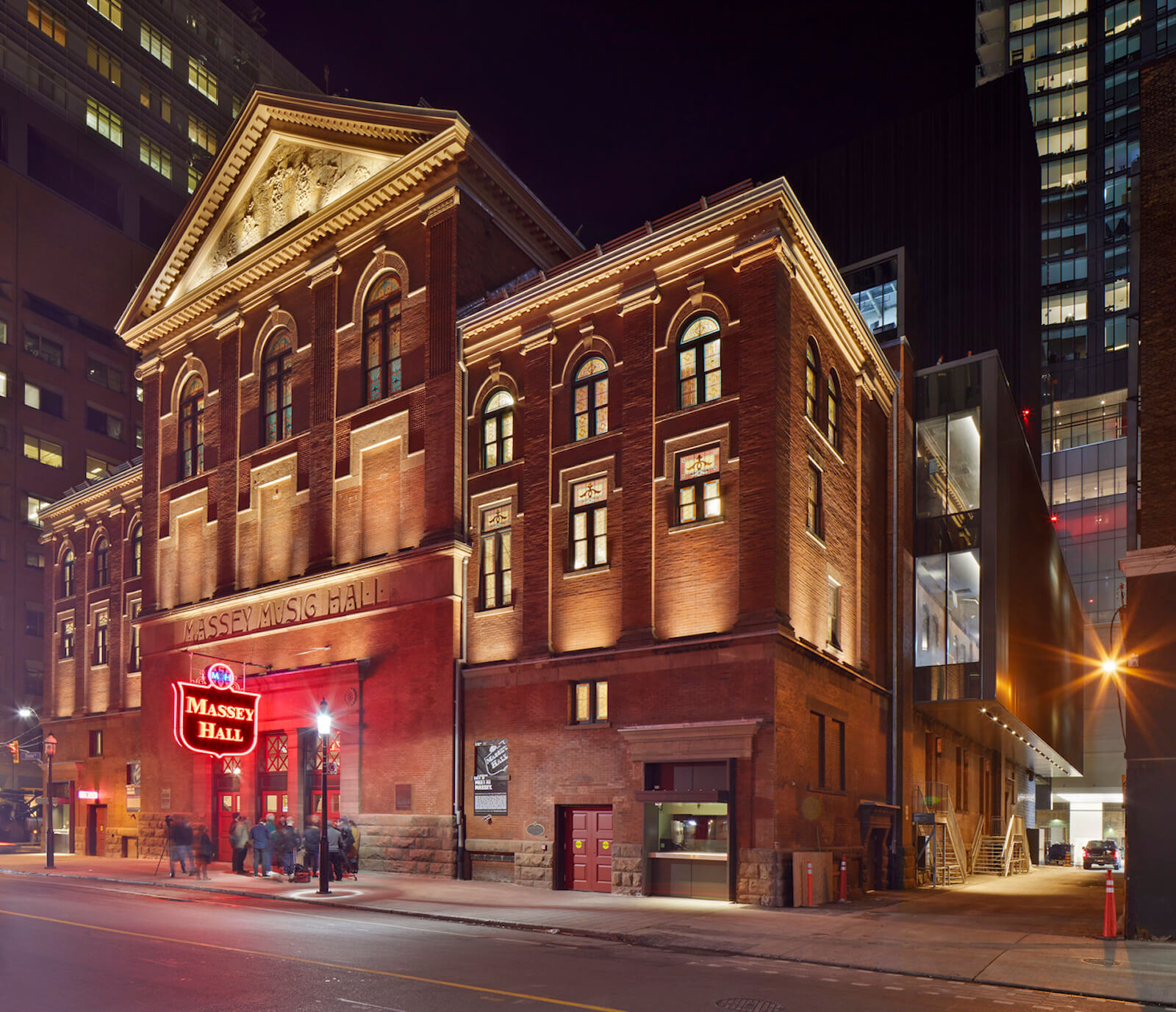 Just like Hart’s original gift to the City, KPMB was able to truly realize its vision thanks to another gift — this time from Tricon Capital and Mod Developments, in 2015. The two entities donated to the Corporation of Massey Hall/Roy Thomson Hall some 445 square-metres of land to the south of the building to build proper back-of-house facilities and patron amenities and services. Then, Heritage Toronto gave Massey Hall the blessing to tear down the derelict Albert Building — originally erected in 1917 — which was attached to Massey and originally served as a residence for the hall’s custodian and a back of stage area. It had long outgrown its purpose.

With space now available to build an extension to the original hall, to house all of the modern amenities patrons expect — such as additional washrooms, bars, dressing rooms, and loading docks — one question remained: how to get patrons from here to there? The innovative solution was the use of a passerelle, a French word for a bridge or catwalk. These glass marvels float above Shuter Street and connect the old Massey Hall with the new seven-storey complex to the south; by hanging the passerelles from already existing masonry walls, Entuitive designed them with careful consideration to not damage any existing heritage elements. 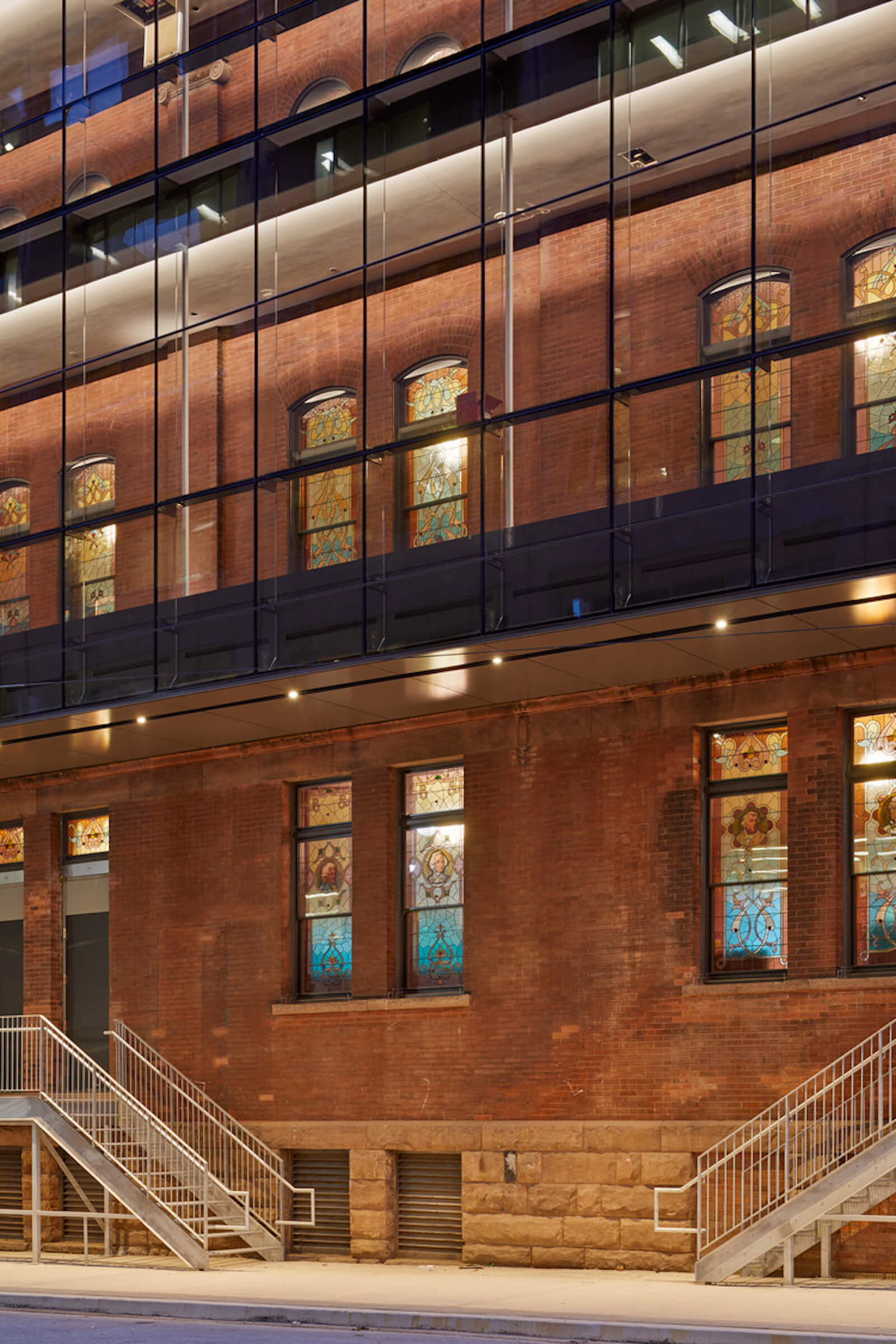 McKenna credits the City of Toronto for their out-of-the-box thinking to accommodate and stamp the permits in record time to allow for this bridge above the sidewalk. “The end result is not just a means for conveyance between the two buildings, but it’s also a space to be in and share,” she says. “As they walk through the passerelles, patrons can learn about the hall’s rich history.”

The additional building also addressed accessibility issues. An elevator now takes patrons upstairs more easily from street level; they can cross the passerelles to get to their seats in the main auditorium on the other side. 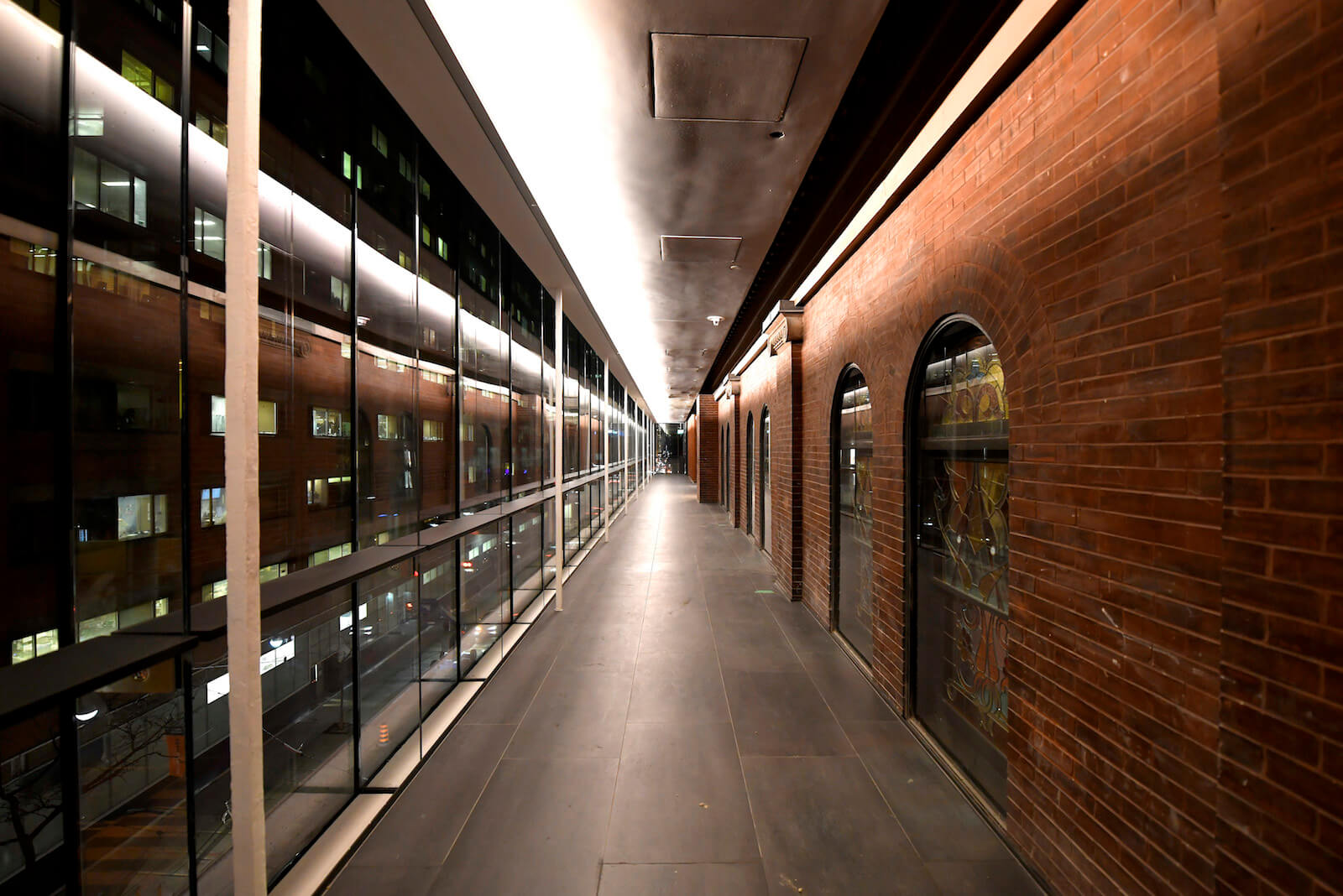 The advice that rang loud and clear from every artist McKenna and her team talked to prior to starting this revitalization: “Don’t mess with the sound!” Thanks to the expertise of world-renowned acoustician Bob Essert (Sound Space Vision), who took the helm in this area, there was no need for them to worry. Essert, who previously worked on Roy Thomson Hall, Koerner Hall and Colston Hall (now the Bristol Beacon) in Bristol, England, collaborated with Engineering Harmonics to make sure they did not alter the sound, but rather enhanced the acoustics.

Chris Couse, a founding principal at KPMB, who was responsible for all the onsite decisions on this project, describes his lead architect role as similar to a symphony conductor. “You are not going to know how to play each and every instrument, but you need to understand how each sounds and how it fits into the whole,” he explains. Describing the acoustician, Crouse continues this analogy, likening them to a composer. “They just give people direction … they don’t tell them how to play,” he adds. 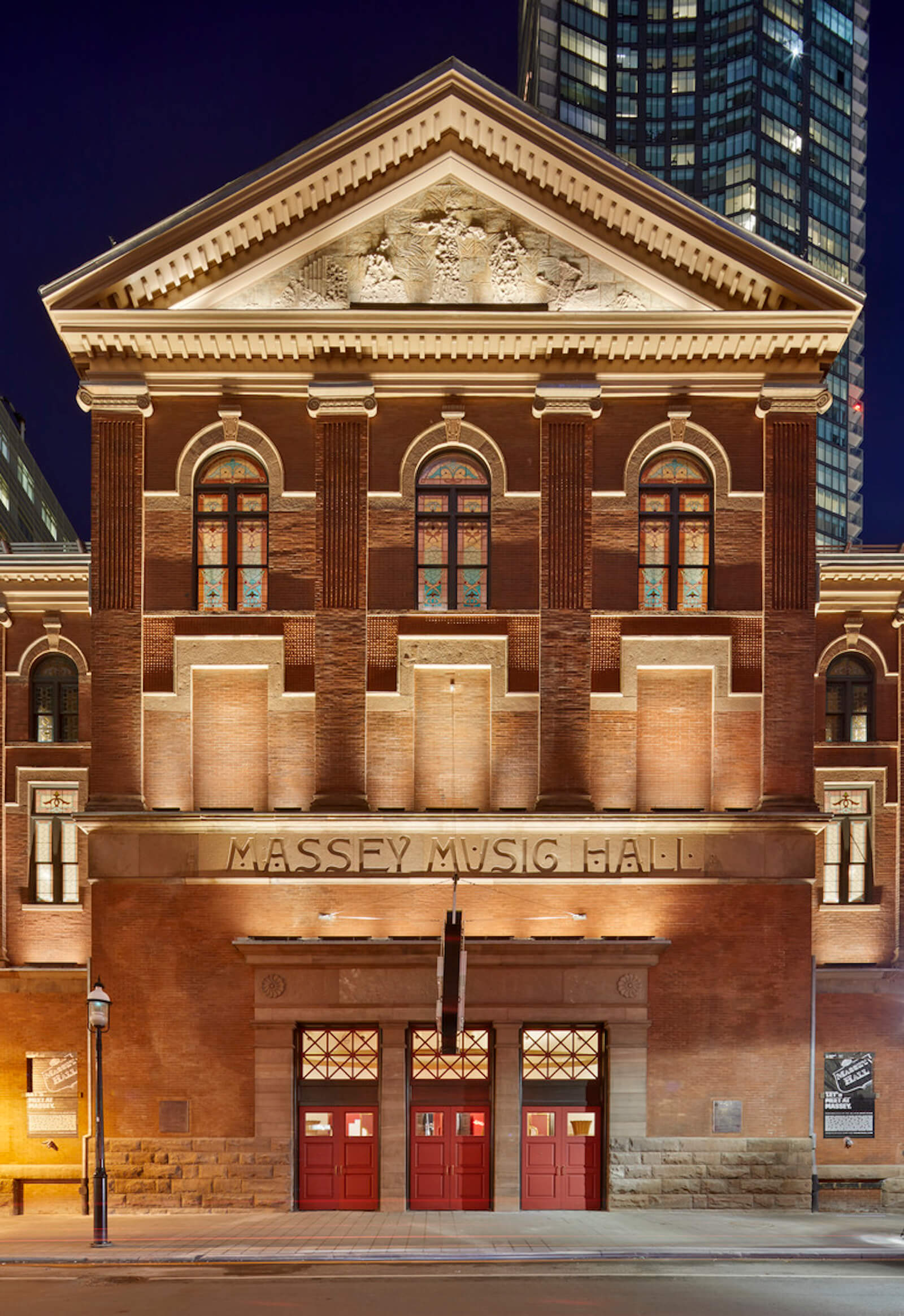 One of these sound solutions was finding an acoustic plaster material to put on the gold dome ceiling above the stage to address the slap-back (a doubling echo with a long delay between repetitions of the sound where individual echoes are perceived) that artists often heard during performances.

While the main auditorium opened in November with three sold-out shows by Gordon Lightfoot, work on the south building continues with an expected full opening sometime in the first quarter next year. “Seeing the love for Gord and for the hall that came through loud and clear from the audience in that auditorium on the reopening night was monumental,” McKenna concludes. “In these days of challenging times and polarized opinions, to have everyone there in such a positive frame of mind was incredible.”