Highlights of the Arsenale at the 2018 Venice Biennale
The 16th International Architecture Exhibition at the Venice Biennale, curated by Yvonne Farrell and Shelley McNamara, is called FREESPACE. Here are a few highlights from the Arsenale’s 50,000-square-metre exhibition space.

The 16th International Architecture Exhibition at the Venice Biennale, curated by Yvonne Farrell and Shelley McNamara, is called FREESPACE. Here are a few highlights from the Arsenale’s 50,000-square-metre exhibition space, displaying installations by top architects from around the world. Pack your walking shoes – this is the biggest architecture show on the planet.

Under a cloudless Venetian sky, La Biennale Architettura opened to the public on May 26. The following are some of the highlights of the installations in the Arsenale – one of the two venues, along with the Giardini, in the eastern part of Venice where the exhibition takes place. Once the largest ship-building centre in the world, the Arsenale now provides some 50,000 square meters of extraordinary exhibition space. The scale is mammoth – the Corderie, the 317-metre-long hall that the exhibition kicks off in, is supported by a series of massive columns that rise six metres high. Even empty the venue is a stunning architectural display.

There can be no argument with the concept and the sincerity of intent: who doesn’t want an architecture that steps outside itself to accommodate human need and interaction, intended or not? But in the context of the exhibition, it’s sometimes difficult to find the through-line. Interaction sometimes feels trivializing. There is no lack of things to climb up on in the Arsenale, to peer into and to ponder. The sheer magnitude of the exhibition – with 64 firms participating in the Arsenale along with a couple of dozen national pavilions – makes it physically challenging to “see” the exhibition, without ever actually de-coding it. But perhaps that is the reality of free space, a space that the user brings intention to, or not.

Organized by La Biennale di Venezia, the architecture exhibition takes place every two years, alternating with the Art Biennale. In addition to the Arsenale, the Giardini, a parkland area, houses the Central Pavilion, where the FREESPACE exhibition curated by Farrell and McNamara continues, along with 29 national pavilions that each showcase particular countries or regions. If you are thinking of catching it before it closes on November 25, pack your walking shoes, this is the biggest architecture show on the planet. 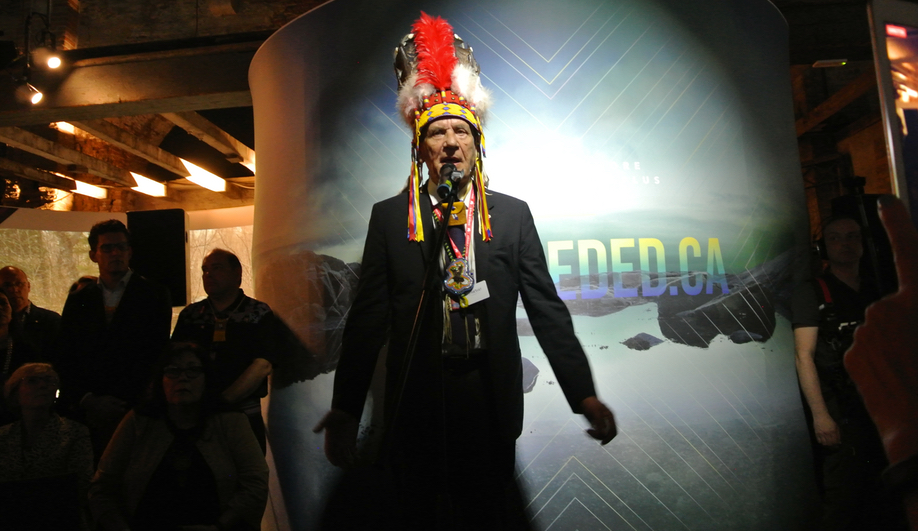 At the opening of Unceded: Voices of the Land, project leader and renowned architect Douglas Cardinal eloquently advocated for an architecture that reflects the values of indigenous peoples. Canada’s official entry is located in the Arsenale due to the ongoing restoration of the historic Canadian pavilion in the Giardini, which, confusingly, inaugurated its completion the same day. In an undulating structure reminiscent of Cardinal’s 1989 Canadian Museum of History, a series of audio-visual projections relay the shared histories and worldviews that infuse the work of 18 indigenous architects and designers from across Canada and the U.S. 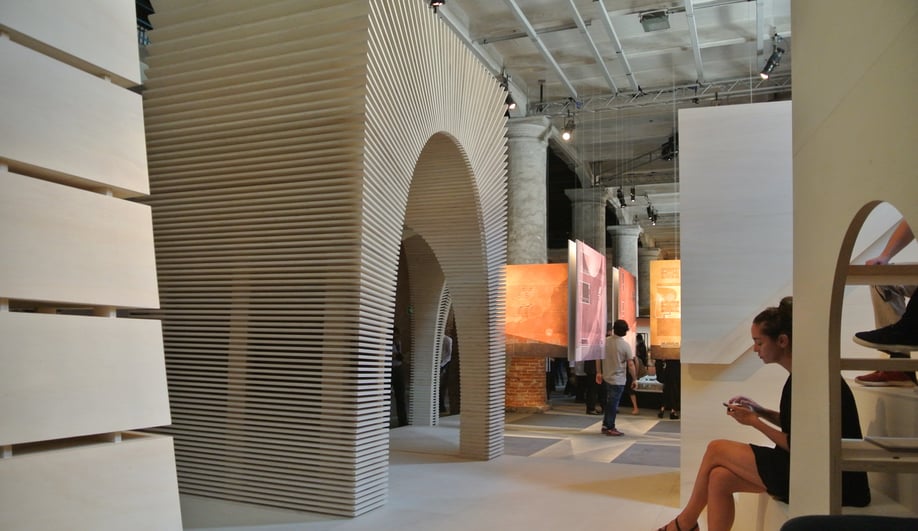 “The architecture of housing is not only the space in which we live, it is the physical infrastructure that frames collective public life.” Alison Brooks Architects demonstrates Brooks’ statement with Recasting, an assemblage of four inhabitable timber totems extracted from existing projects and representing free space as threshold, passage, facade and roof form. 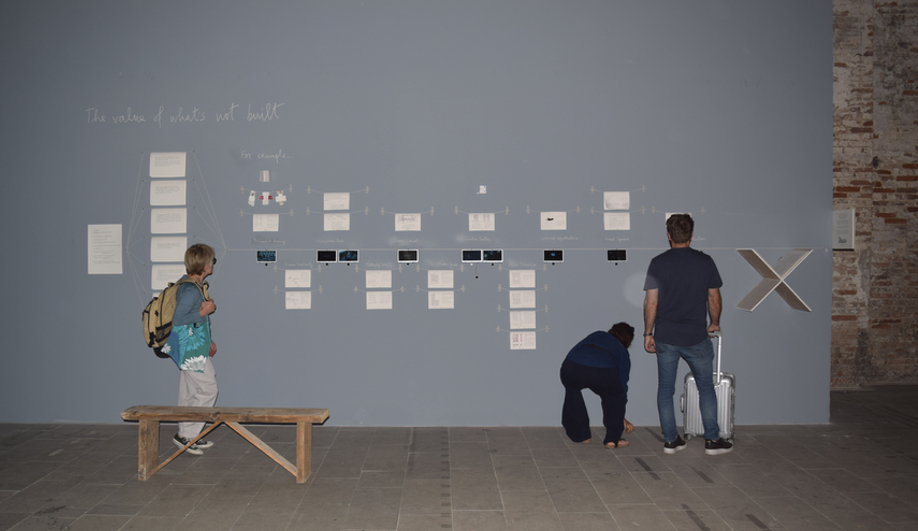 The most understated, but by no means least significant, exhibit in the cavernous Corderie is Elemental’s The Value of What’s Not Built. Alejandro Aravena, curator of the 2016 biennale, presents a handwritten manifesto on why it is important to leave unoccupied voids that permit spontaneous user initiatives, accompanied by examples transmitted via tiny video screens and drawings. 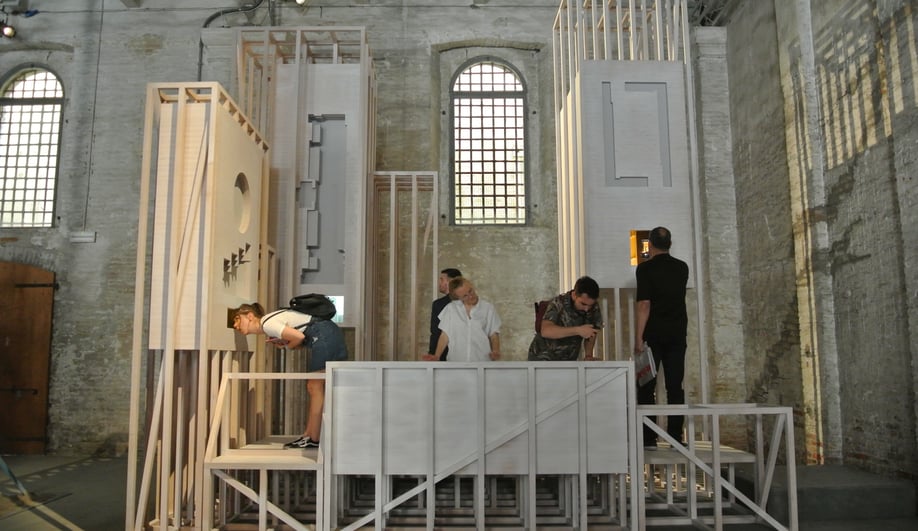 Based on a recent residential project, Hall McNight’s installation invites physical interaction, while providing a gallery of views into free spaces from four current projects. 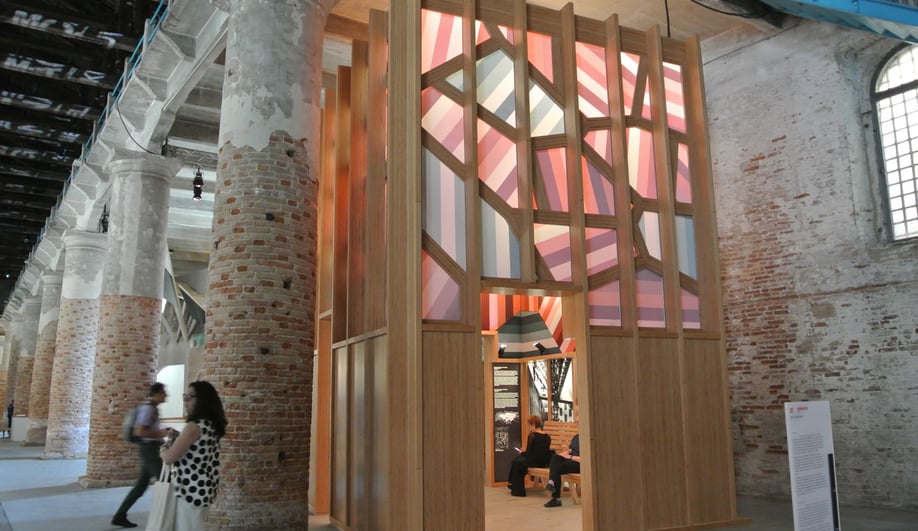 In typically colourful Sauerbruch Hutton form, Oxymoron reflects the themes of the firm’s M9 Museum District in Mestre, where free space thrives in the liminal spaces between the public and private areas. 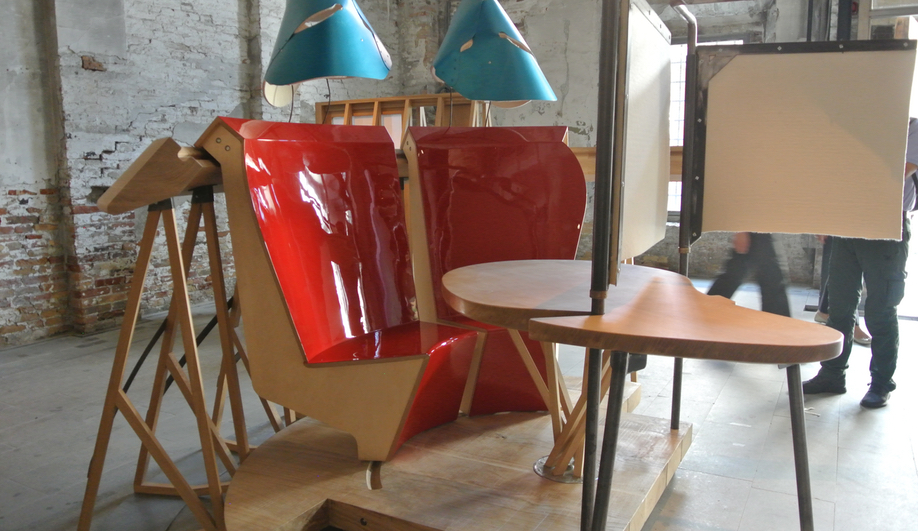 Proposal B, by Salter + Collingridge Design, is a kind of machine for gossip and chat that takes its cue from the medieval poche window seats of Stokesay Castle – a place to view the outside and where conversations away from the traditional formalities might take place. 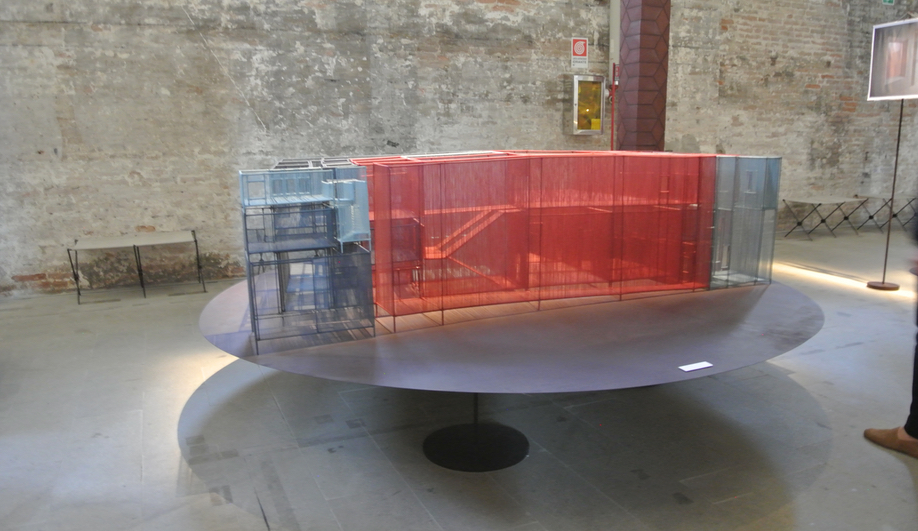 Francesca Torzo presents the extension of Z33 House for Contemporary Art in Hasselt, Belgium – a project the Italian architect won through competition that will open next year. Images, texts, drawings and several models describe the sequence of spaces, while 1:1 prototypes offer direct experiences of materials including beautiful purple-red bespoke bricks. 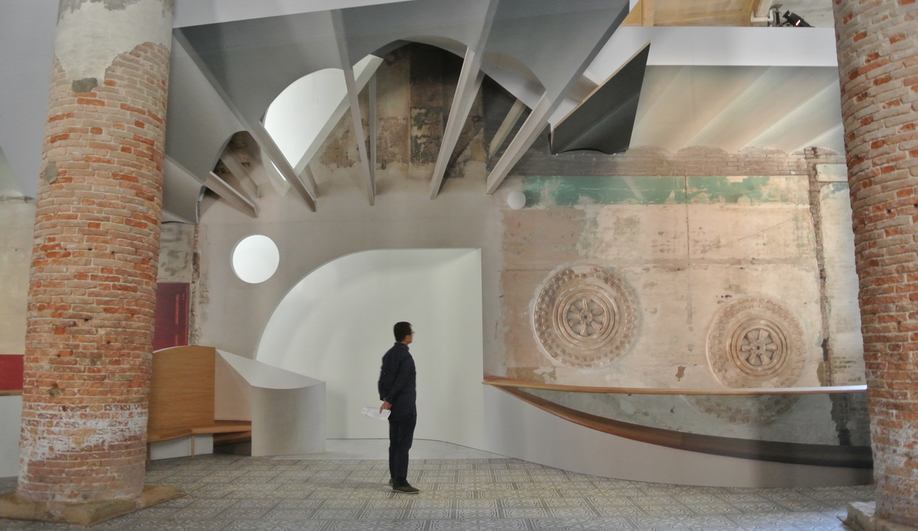 Serendipity can produce free space. A hole in the roof in the abandoned ex-workers’ co-op building was retained for its transformation into Barcelona’s Sala Beckett theatre by Flores & Prats. A section of the building was reconstructed, including the hole, in the Arsenale. 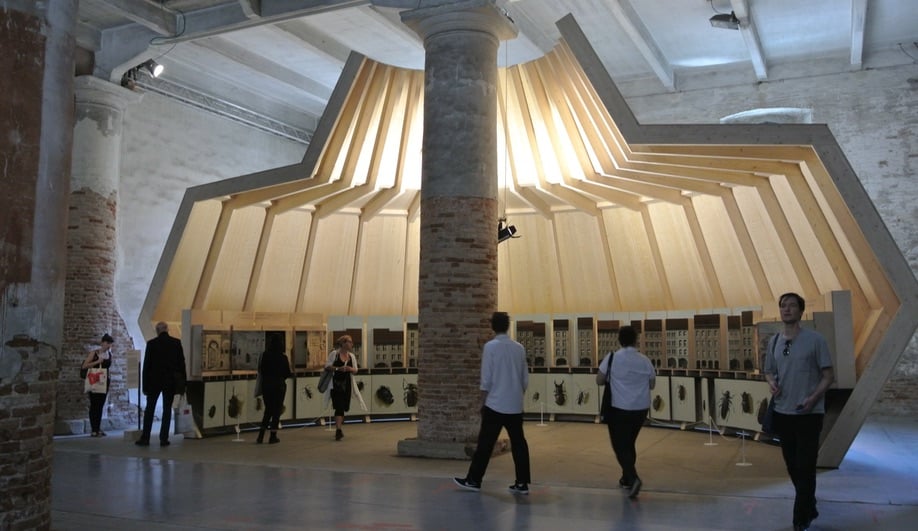 Responding in scale and mass to the Corderie, a circular wunderkammer contains work of 35 first-year students in five design studios coordinated by Mario Botta at the Academy of Architecture in Mendrisio. 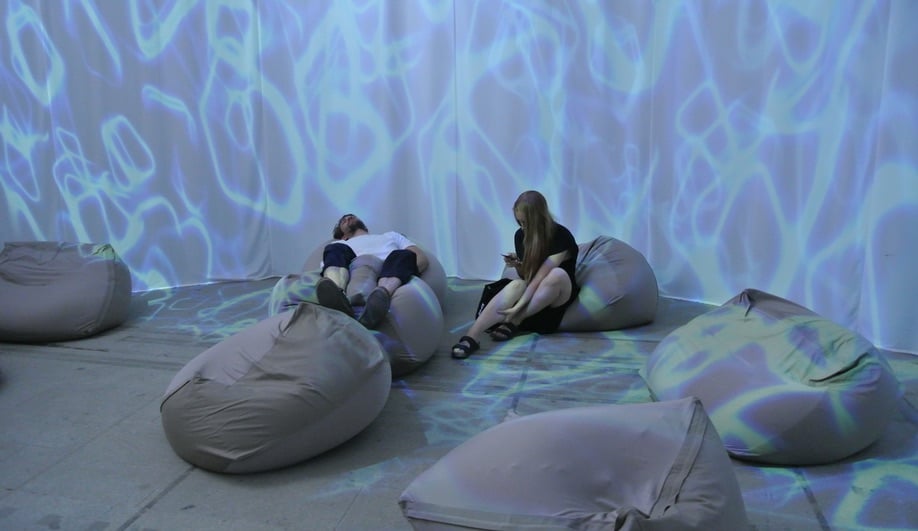 Toyo Ito offers Virtual Nature, an oasis in the busy exhibition hall where one can “feel nature despite the space being artificial.” A free space to recharge your battery. 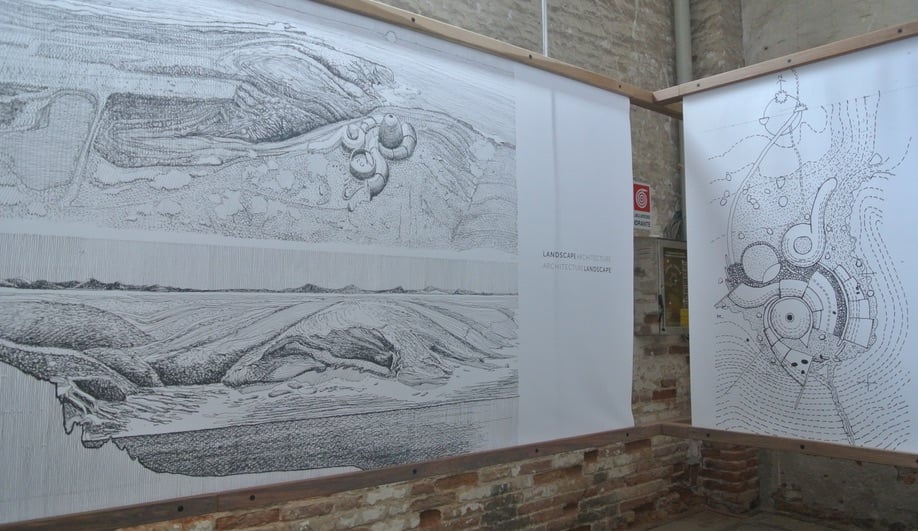 Large-scale reproductions of Peter Rich’s hand drawings demonstrate an organic fluidity of landscape and built form in his work. Aptly titled, Landscape Architecture | Architecture Landscape, the installation features projects built in his native South Africa to proposals across Africa and into China. 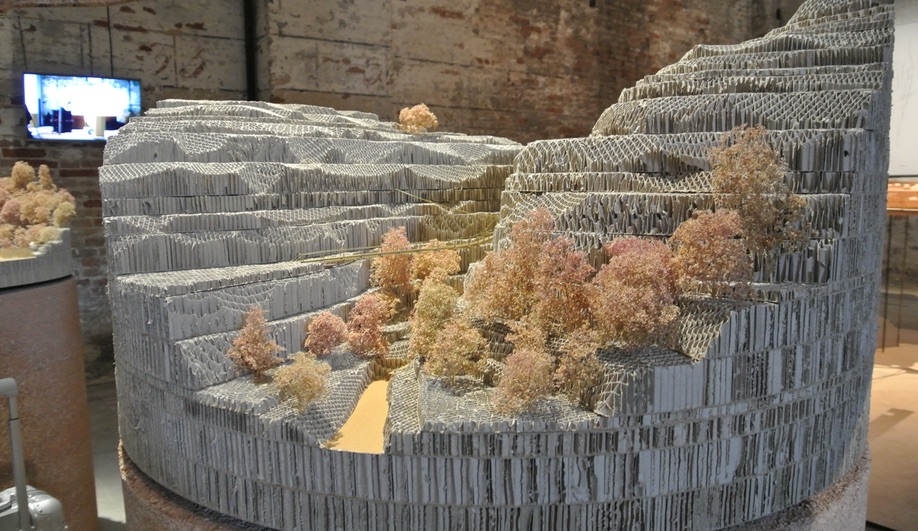 Gumuchdjian Architects presents Meander: a series of site-specific interventions along a 750-kilometre walking trail in the Caucasian mountains of Armenia. The ten-year project was conceived as a collaboration between architects and the public to create a sustainable and arresting tourist framework. This impressive model shows a bridge designed by Techniker Engineers built with lightweight materials and assembled by hand. 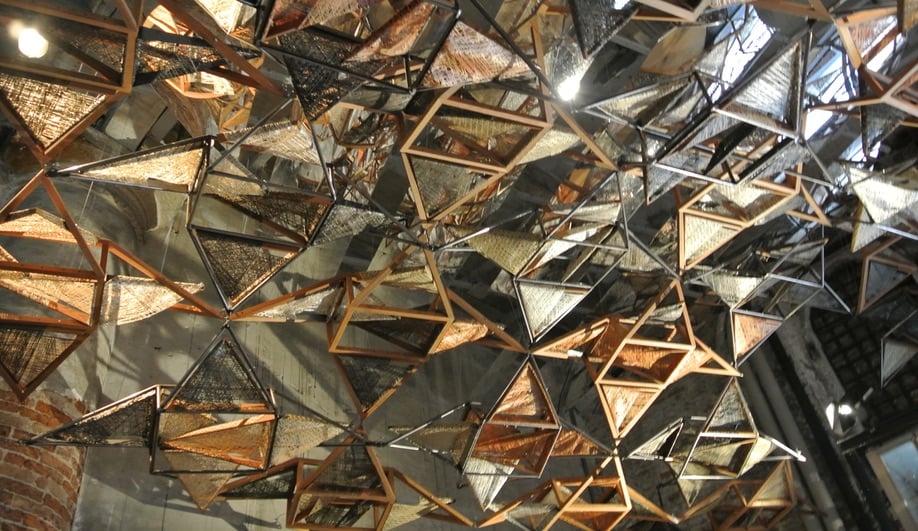 Could a free space be woven? For a new subway station in an eastern suburb of Paris that lacks identity, Benedetta Tagliabue of Miralles Tagliabue EMBT proposes weaving a canopy that recalls the patterns and colours of Africa. 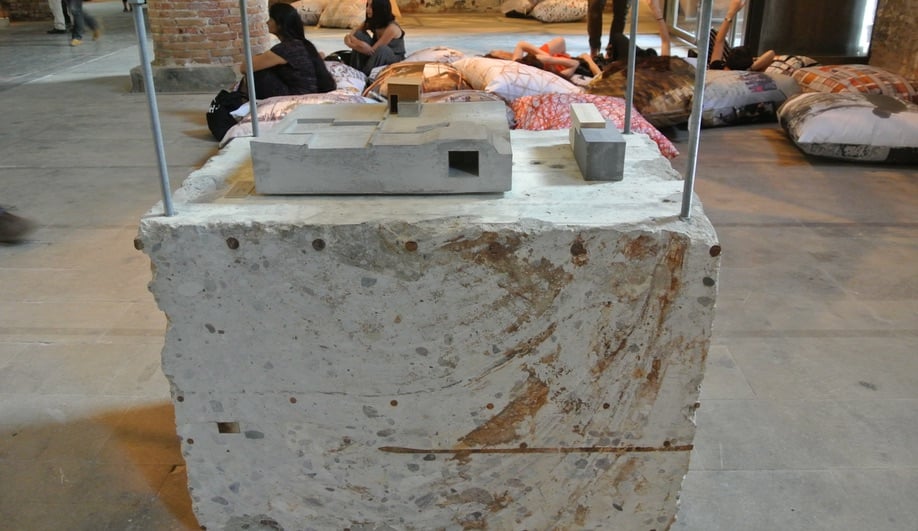 Huge chunks of concrete cut out of decommissioned military bunkers serve as plinths for models showing how the bunkers are transformed by Skalsö Arkitektur into a holiday homes at Bungenäs, on the island of Gotland in the Baltic Sea. 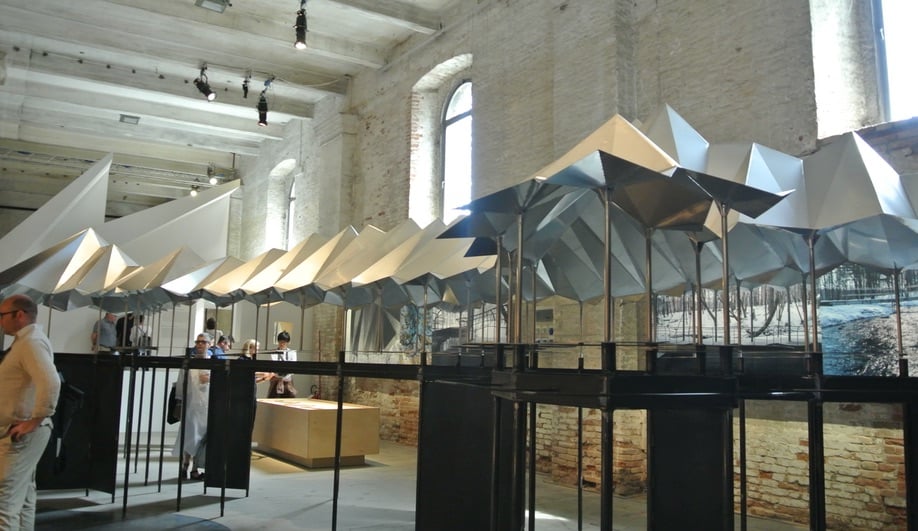 Finding a space to build where they wouldn’t destroy anything is the essence of free space for Jensen & Skodvin Arkitekter. For the Protective Roof over Moya Spring Source in Changbai, China – a sensitive environment where no machinery is allowed – they developed a complex mapping system for in order to preserve the trees while protecting the drinking water source. 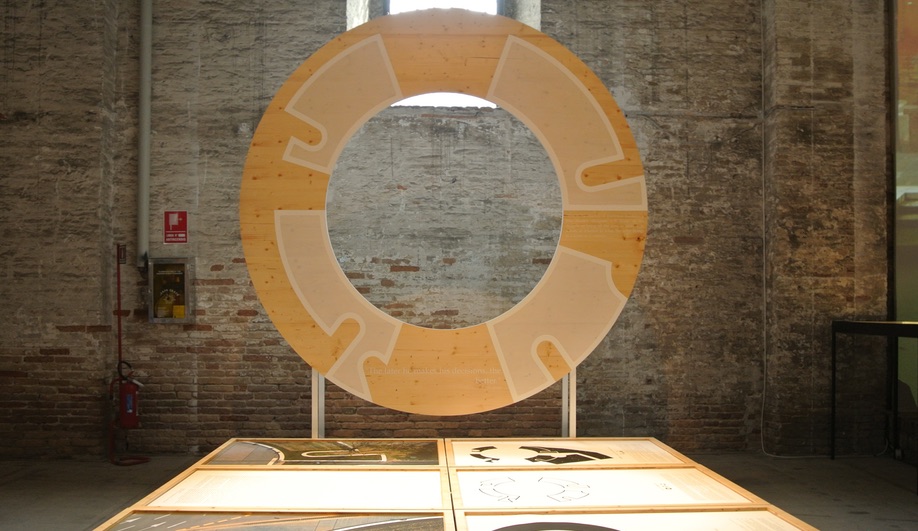 For the transformation of Piazzale Gugliemo Marconi in Bergamo, Italy, Ines Lobo Arquitectos proposed A Bench for 100 People. The four segments all contain vegetation and encircle an existing fountain. 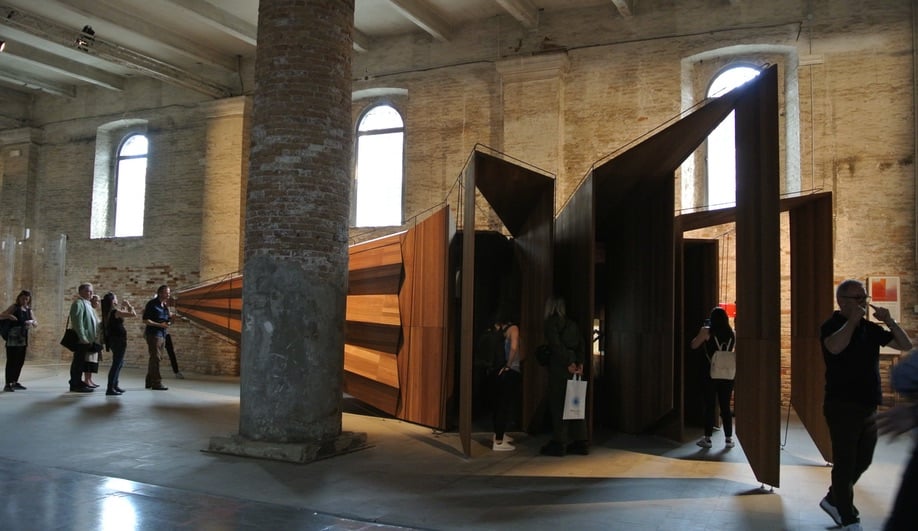 Called Somewhere Other, architect John Wardle’s viewing machine is meant to be a long lens between Venice and Australia. Within the installation’s portals, thresholds and viewing points, images of the firm’s work at various scales appear via film and in screen-like mirrors that integrate the viewer. 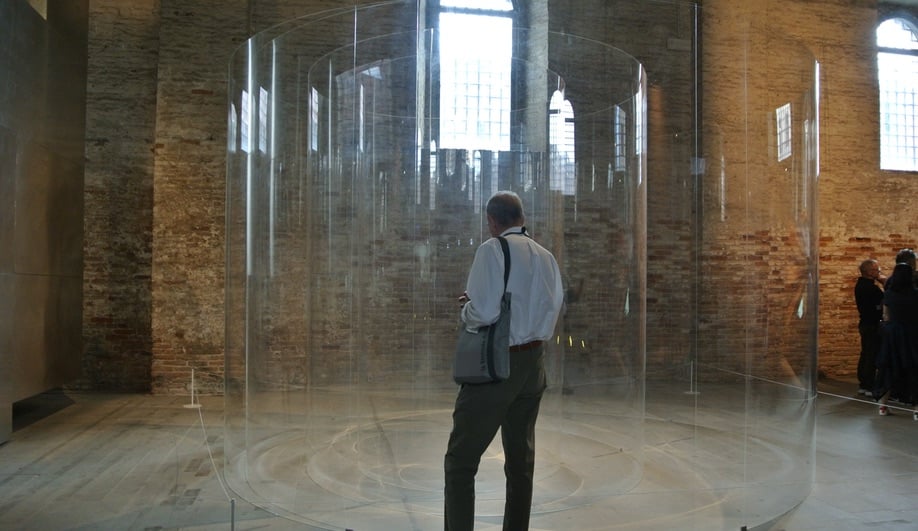 SANAA’s contribution, called guruguru, consists of a spiral of clear acrylic that subtly distorts the view of its surroundings depending on conditions of light and occupancy. 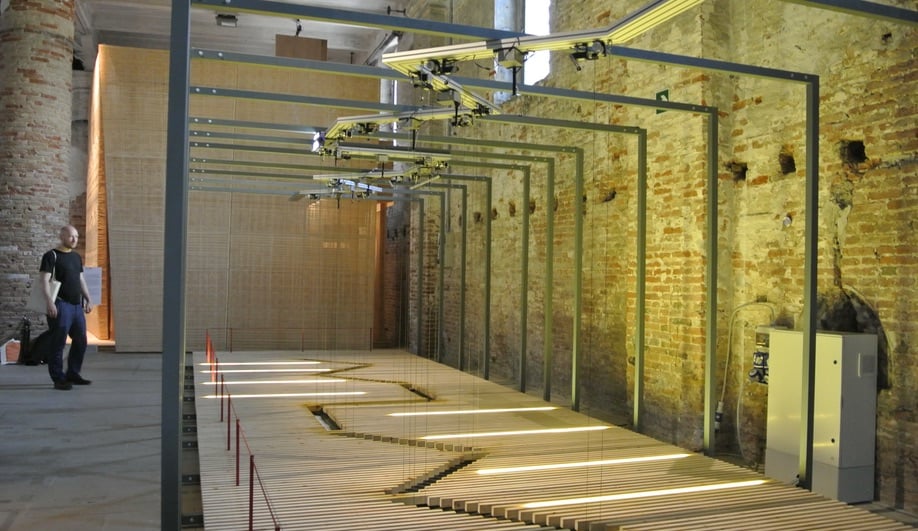 Riccardo Blumer’s students – Lorela Arapi, Stefano Clerici and Andrea Cappellaro -concocted Wall, a machine that continually builds minimal surfaces composed of water and soap that last only a few seconds. The project derives from a collaborative workshop at the Academy of Architecture, supported by the MADWORKSHOP Foundation. 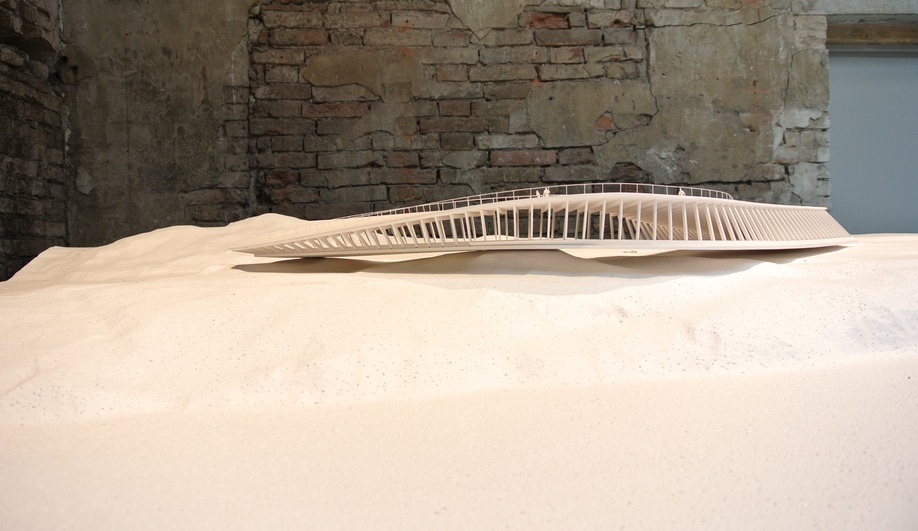 A model of the Icefiord Centre on the west coast of Greenland by Dorte Mandrup Architects. The exhibit is entitled Conditions, in reference to the extreme challenges related to the climate. 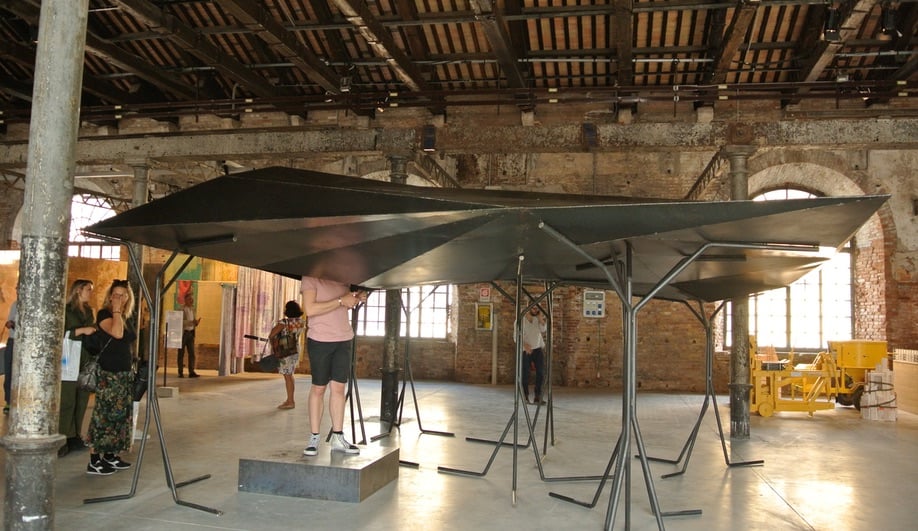 Untitled, by Aires Mateus, is an abstraction of space, created by a sequence of roofs linked together with an inner ambience of an enclosed garden. 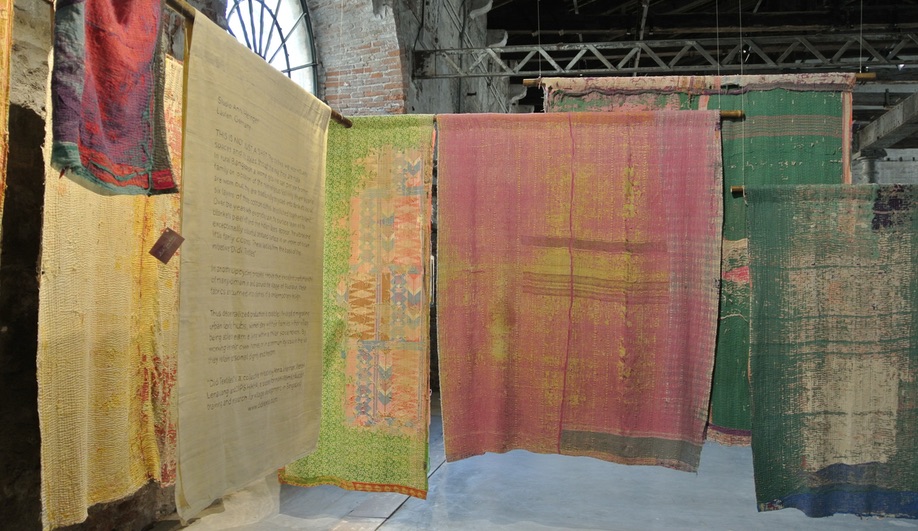 Studio Anna Herringer’s display of Bangladeshi textiles called “This is not a shirt, this is a playground,” underlines the need to maintain rural villages instead of moving populations to cities where communities unravel. Herringer, UNESCO Chair of Earthen Architecture, is one of the founders of Didi Textiles, a group that offers opportunities for textile workers to remain in their own villages. 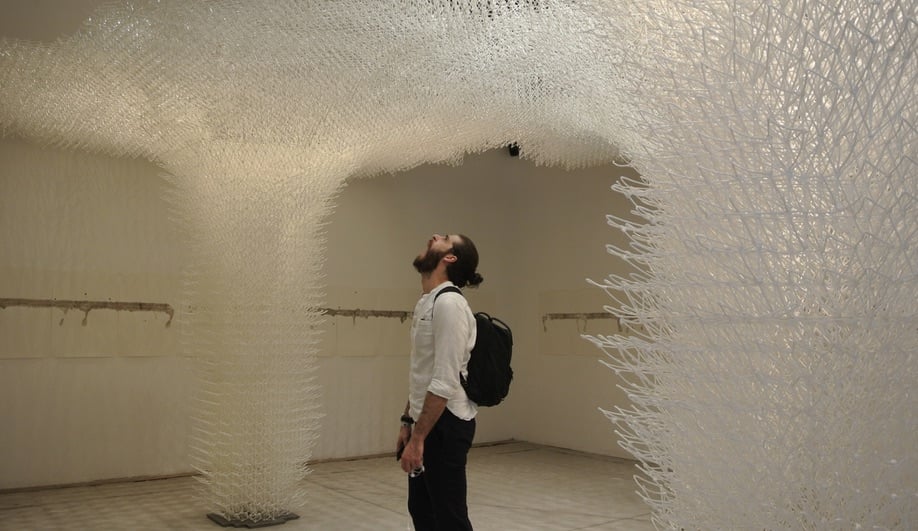 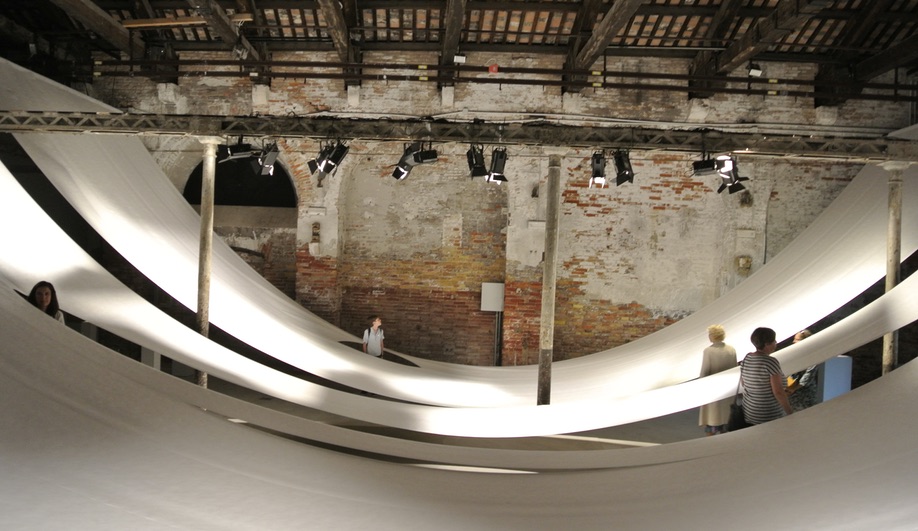 In the Indonesian Pavilion, also in the Arsenale, evocatively draped sheets of tyvek undulate in the breeze. Sunyata: The Poetics of Emptiness demonstrates that free space can induce empty headspace. 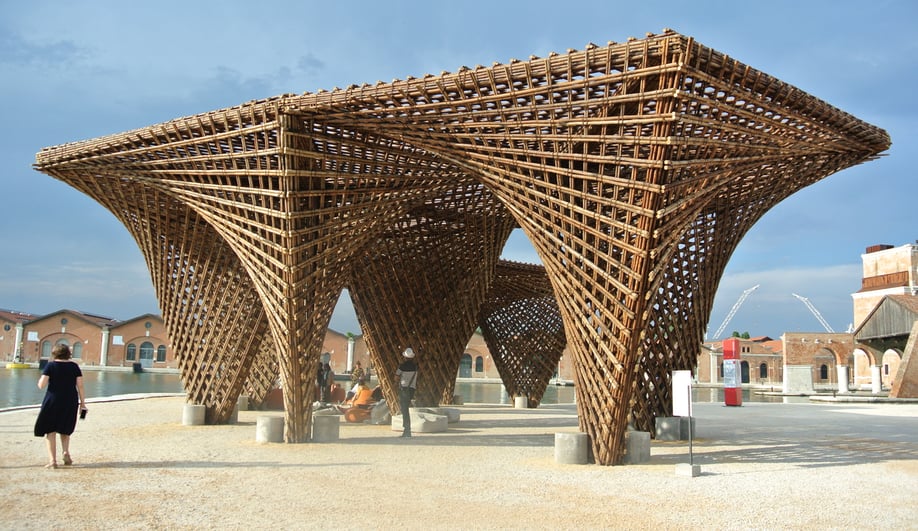 Shipped from Vietnam and assembled by Vietnamese and Italian architects and craftsmen, Bamboo Stalactite by VTN Architects offers shade to visitors along the canal, epitomizing the generosity of free space. 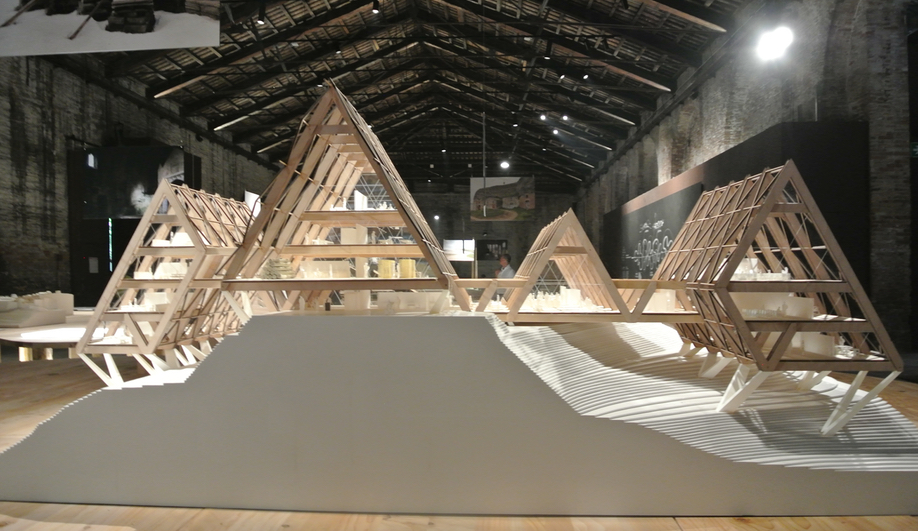 At the end of the Arsenale is the Italian pavilion, directed by Mario Cucinella. Taking as its theme Arcipelago Italia, it focuses on the often mountainous interior areas of the country, from the Alps, along the Appenines to the islands. The free space theme is explored through urban and rural settlements and the territory that connects them. Shown is a model of Off-Cells, a workspace for Foreste Casentinesi, by Mario Cucinella Architects with diverserighe studio.