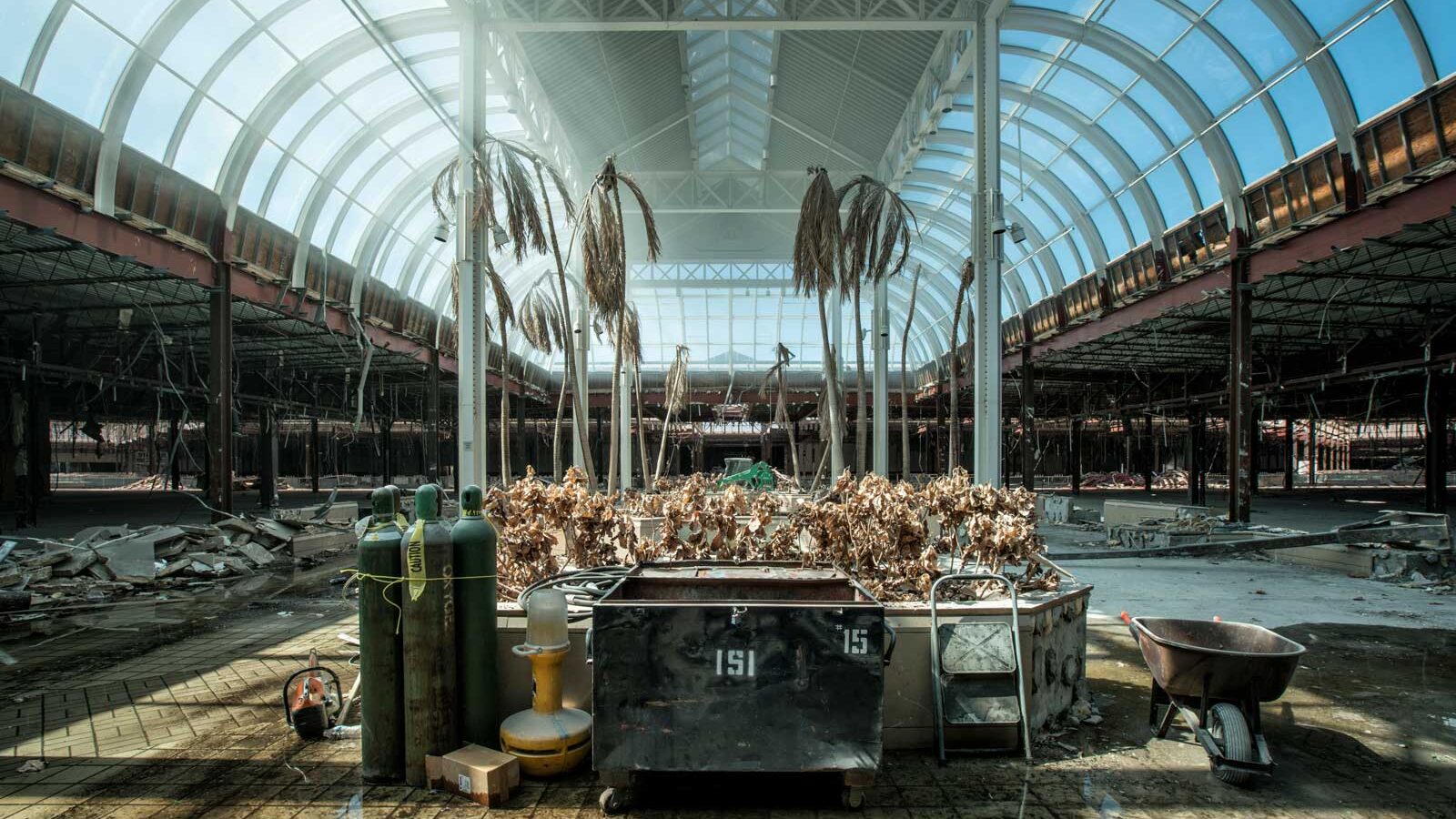 The Death and Life of Great American Malls

Architecture critic Alexandra Lange’s new book, Meet Me by the Fountain, chronicles the evolution of shopping — and culture — from the post-war boom to the Amazon era.

“Let me tell you about my mall,” writes Alexandra Lange. In the opening pages of Meet Me by the Fountain: An Inside History of the Mall, the author and architecture critic recounts the conversations that helped shape her intimate and accessible new book of popular history: In North America, everybody has a mall.

While the mall remains a ubiquitous feature of American life, we seldom acknowledge the depth of its social functions. Like our cars, highways and houses, the hallways, food courts, escalators, department stores and parking lots that make up our shopping centres also turn greater cultural and economic gears. But more fundamentally, they are places we inhabit together. “I wanted to watch people, I wanted to be among people,” writes Lange, describing a visit to New Jersey’s American Dream complex. “We were all seeking that at the mall.” 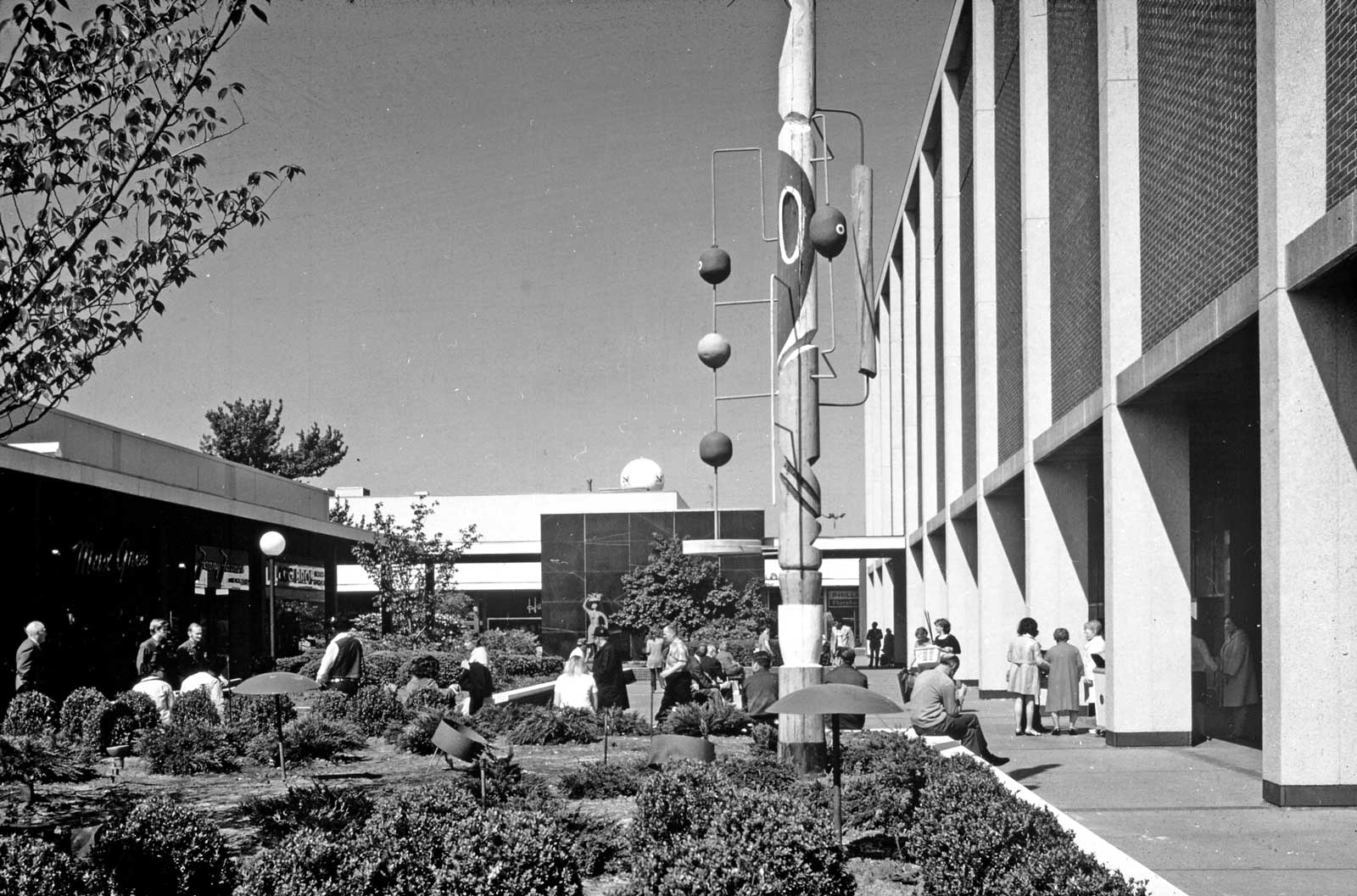 This search for a collective experience forms the book’s emotional and intellectual nucleus. Arriving at a moment when “dead” and “dying” malls are a regular part of our lexicon — and urban fabric — Lange offers a riposte to the onslaught of eulogies. Today, malls may live in the public imagination as relics of an (almost) bygone era of retail, swallowed up by the one-two punch of online shopping and the COVID-19 pandemic. “But in the rush to dance on the mall’s grave, we risk treating the mall only as a consumer object and neglecting the basic human need that it answered,” writes Lange. 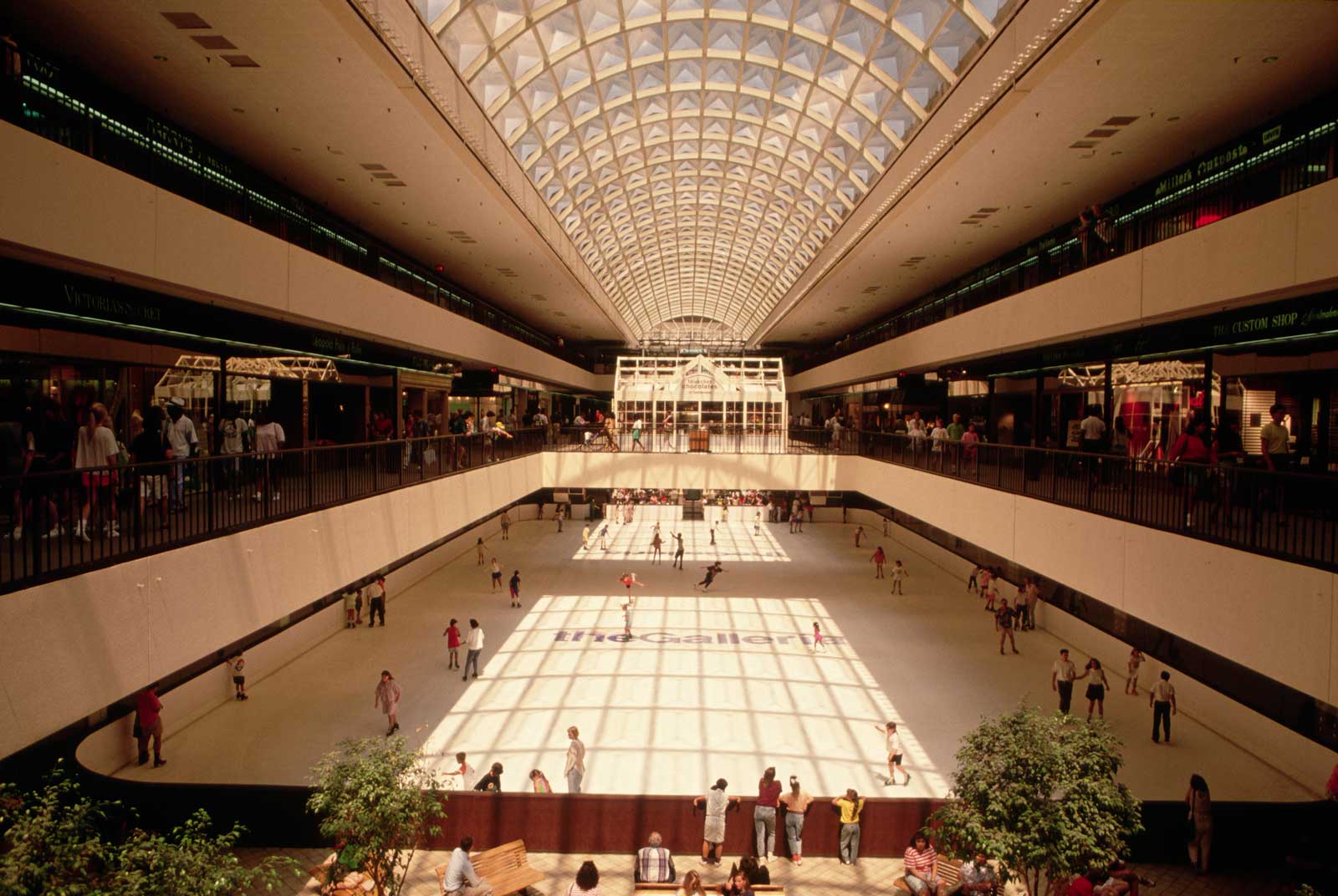 As its title suggests, Meet Me by the Fountain situates the mall as a place of human connection in addition to a hub of commerce — a history that Lange traces all the way back to the grand department stores of mid-19th century Paris. In part made possible by Gustave Eiffel’s structural innovations, fashion destinations like the Bon Marché expanded the possibilities of retail, combining an unrivalled selection of merchandise with elegant displays, airy atria and natural light. Window-shopping emerged as a new urban pastime from the introduction of this new architectural type, “women of means could spend a day moving between the newly paved sidewalks and the newly built department stores.”

In addition to transforming the retail landscape, early department stores also spurred social transformation, creating spaces geared toward wealthy women in otherwise male-oriented cities. Though America’s storied retail meccas, like Macy’s and Hudson’s, were quick to follow in Bon Marché’s well-heeled footsteps, it wasn’t until well into the 20th century that the shopping mall as we know it today was born. While department stores created an important social precedent, America’s rapid postwar suburbanization created a radically new geography — and a new way of life. 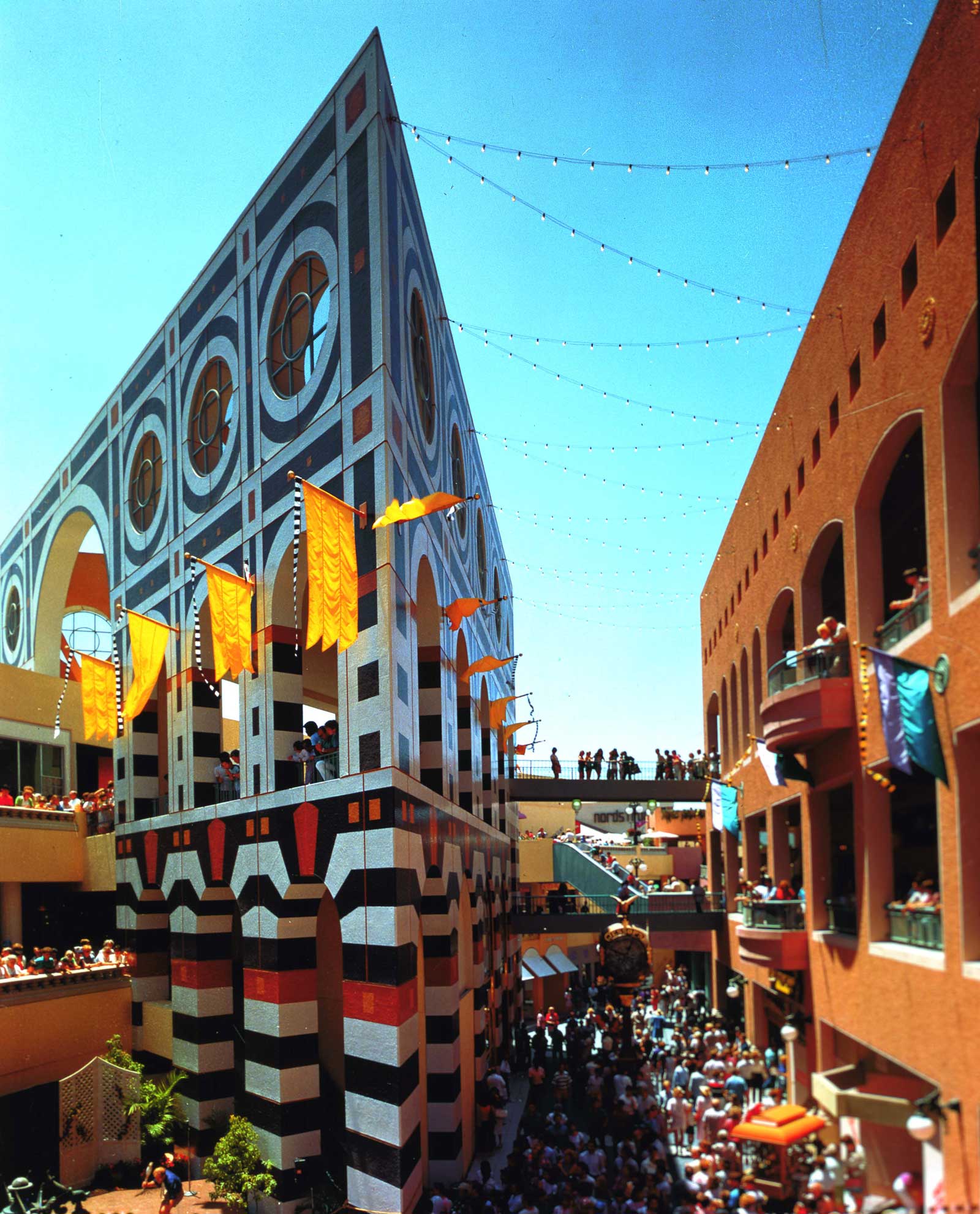 By the 1950s, a maze of highways and single-family homes covered the continent. Although downtown department stores retained an urban cachet, car-centric lifestyles necessitated a new kind of shopping destination. The man for the job was Victor Gruen. The Austrian-born architect was a pivotal figure in developing a new typology, championing pedestrian-oriented spaces that replicate the rhythm and ambiance of a bustling European street within indoor, climate-controlled settings. Bookended by marquee department stores and surrounded by surface parking, Gruen’s elegant modernist hubs — including Michigan’s Northland Center (1954) and Minnesota’s Southdale Center (1956) — established architectural conventions that remain instantly recognizable hallmarks of suburbia.

It’s a history that Lange recounts with economy and erudition — and a gratifying emphasis on design. She explains that Gruen did more than make new space for shopping, “incorporate[ing] the crisp, minimally ornamented style current in European architecture […] into consumer culture.” Though the design language was elegantly rational and unadorned, the effect could be disorienting to the point that the term “Gruen transfer” was coined to describe the now-familiar feeling of walking into a shopping mall, losing track of your initial intentions and succumbing to the aimless allure of impulse purchases. 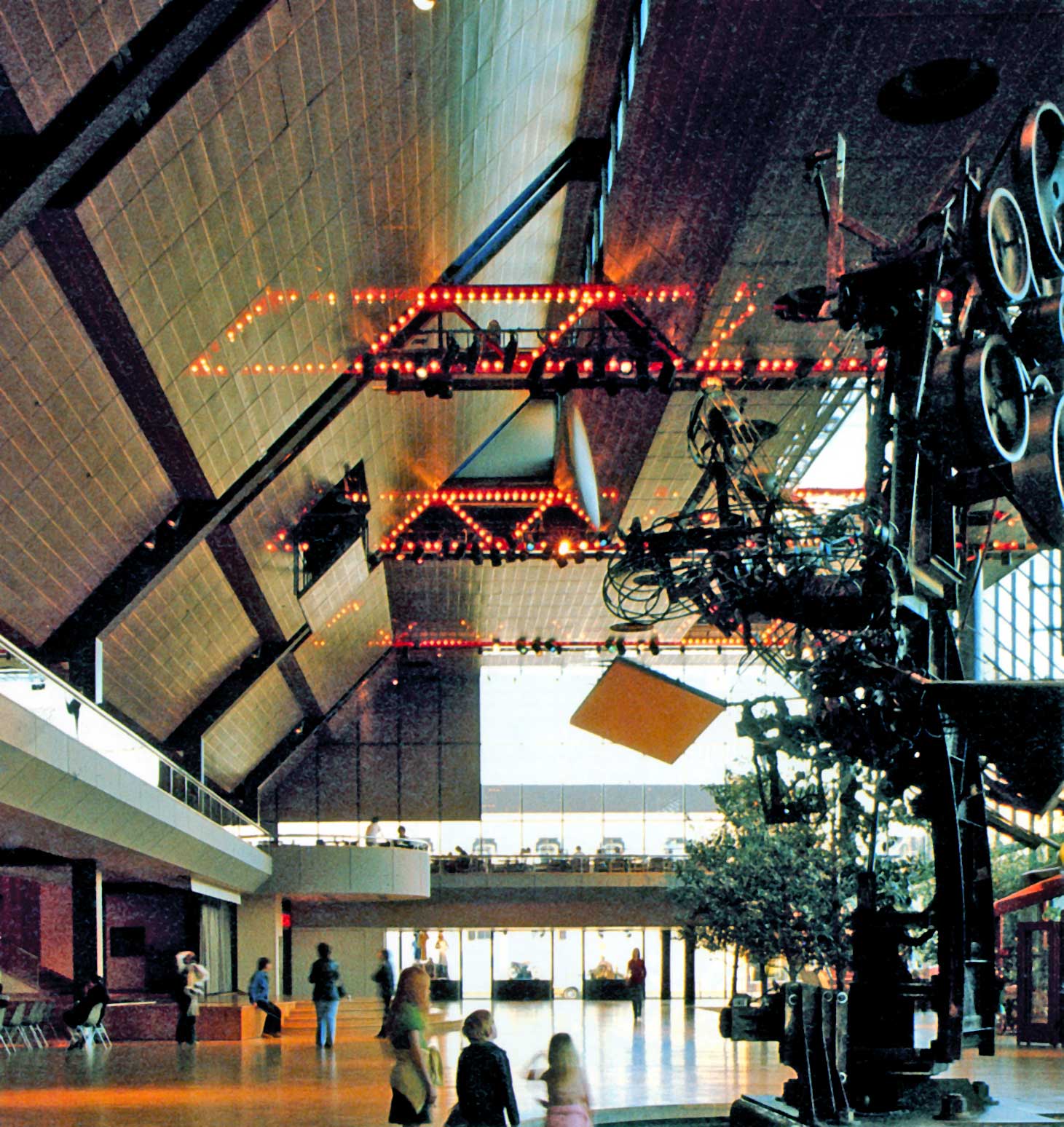 In Columbus, Indiana, Victor Gruen’s Commons mall was distinguished by the inclusion of a community playground and exhibition space. Image Credit: Gruen Associates

Once duplicated across the continent, Gruen’s clean, utopian modernism would evolve into more free-wheeling aesthetics. In the 1980s and 1990s, a PoMo-wave washed over the mall, epitomized by architect Jon Jerde’s creations, ranging from Minnesota’s Mall of America (1992) to Las Vegas’ Freemont Street Experience (1995) and Los Angeles’ Universal CityWalk Hollywood (1993). The Gruen transfer could be bewildering, but Jerde’s world was a dizzying kaleidoscope.

Design is the leitmotif that knits the narrative in Meet Me by the Fountain together, but the breadth of Lange’s analysis gives it deeper meaning. Buildings, spectacular and ordinary, are contextualized through the social, economic and political systems in which they’re embedded. From the Meet Me by the Fountain’s opening chapters, Alexandra Lange sets an impressively expansive stage, chronicling how the GI Bill and the Highway Act of 1956 shaped American suburbs and how racist housing covenants — and the more insidious redlining that followed — created exclusionary white-only communities. As a place to shop and socialize, the mall both reflected and amplified the divisions in American society at large.

Lange meaningfully ties back this broader context to design. “Through seemingly innocuous decisions such as whether, and where, to include a stop for public buses,” developers, planners and architects “created additional barriers for Black shoppers,” Lange writes, describing how spatial discrimination was enacted at the scale of individual buildings. More broadly, Meet Me by the Fountain probes the social and cultural ramifications of private spaces as the locus of public life. Closely policed, guarded by private security and subject to their own regulations and policies, shopping malls make for fraught “town squares.”

A December 2014 Black Lives Matter demonstration at Minnesota’s Mall of America offers a case in point. The mall was, Lange notes, a logical place to hold a demonstration: “Where in Minneapolis could [demonstrators] get more attention than the Mall of America on the weekend before Christmas?” But almost as soon as the chants started, a giant screen lit up, warning the protesters that their presence was unauthorized. Sure enough, charges and arrests for trespassing were issued. It was another salvo in “[t]he battle over the public role of malls […] [one] playing out for eight decades, both in atriums and in the courts.” 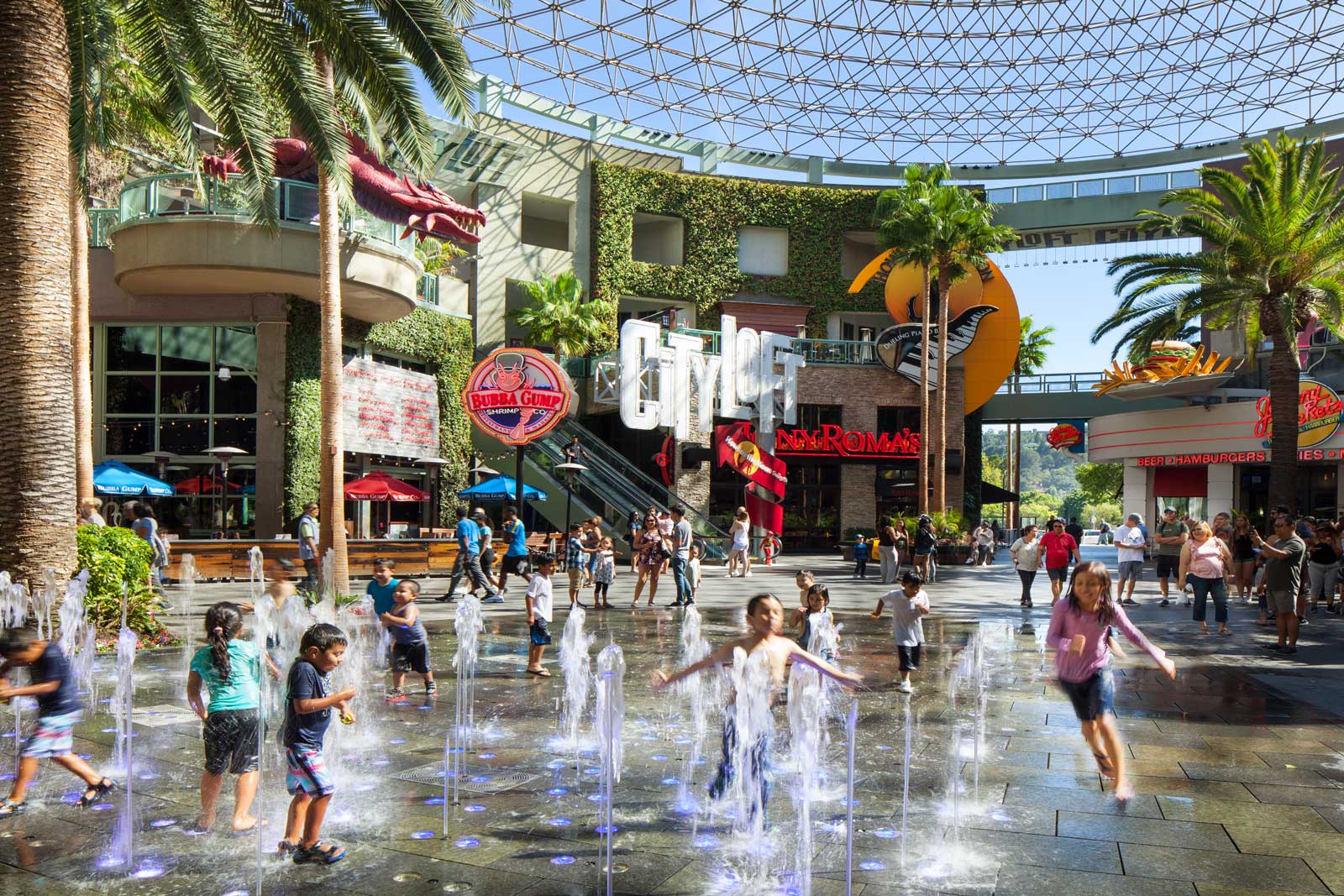 Throughout, Lange’s focus is not on shopping, or even on architecture per se, but rather on the spaces in which America’s public life is lived. How do private spaces shape our shared experience? Why is the mall typically the first place that American kids are allowed to navigate on their own? and How can we reinvent these spaces — and celebrate their social functions — as online shopping accelerates and brick-and-mortar retailers close their doors? Lange delves into these questions, and in answering them positions the mall as a cornerstone of civic life in the US.

The commitment to such questions elevates the narrative, while Lange’s elegantly conversational style — seamlessly flowing from Mean Girls to Michael Sorkin — makes for engrossing and accessible reading. But in writing about malls, Lange has taken on a subject that she describes as “potentially a little bit embarrassing as the object of serious study.” While the early civic meccas of Gruen’s era have been given academic and critical attention, Lange explains that the 1970s saw a fissure “between the commercial and academic branches of architecture […] Good architects design museums, bad architects design malls.” It’s a mentality that has persisted ever since. And even if our malls tend to be crass, thoughtlessly designed spaces, Lange makes this much clear: They deserve to be taken seriously. 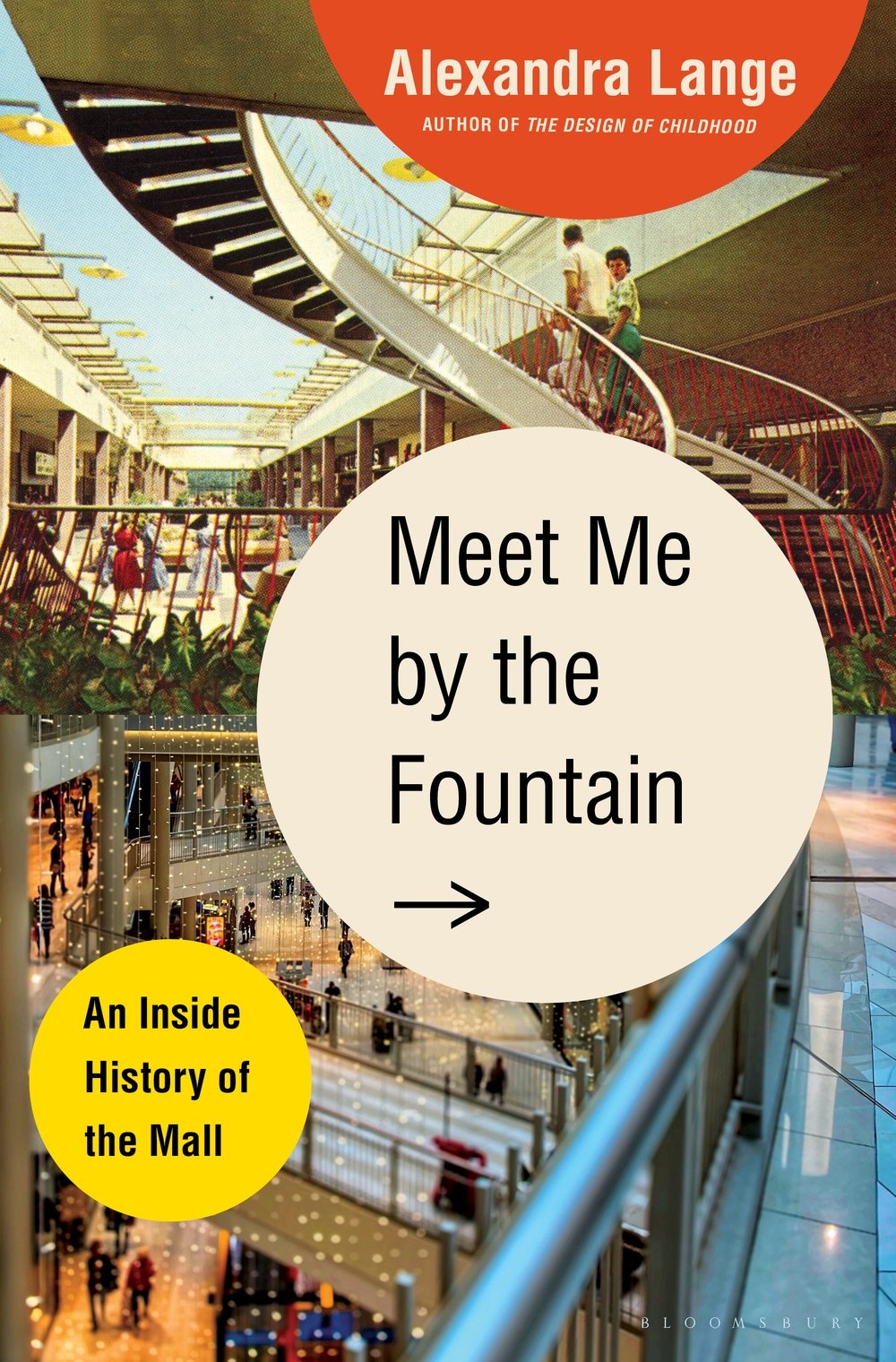 Meet Me by the Fountain quietly expands the architectural canon, bringing a sharp critical eye to the ubiquitous buildings that lie beyond our academic and intellectual horizons. Like Alexandra Lange’s previous book, The Design of Childhood, which explored how toys, classrooms and playgrounds shape kids, this is one of the rare design books that your in-laws, cousins and airplane seatmates might actually enjoy hearing about. After all, they each have a mall too.

Architecture critic Alexandra Lange’s new book, Meet Me by the Fountain, chronicles the evolution of shopping — and culture — from the post-war boom to the Amazon era.