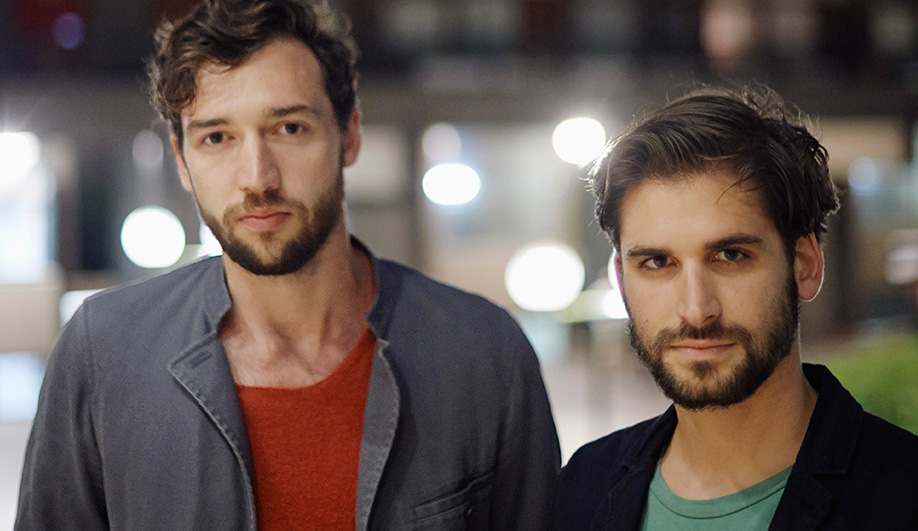 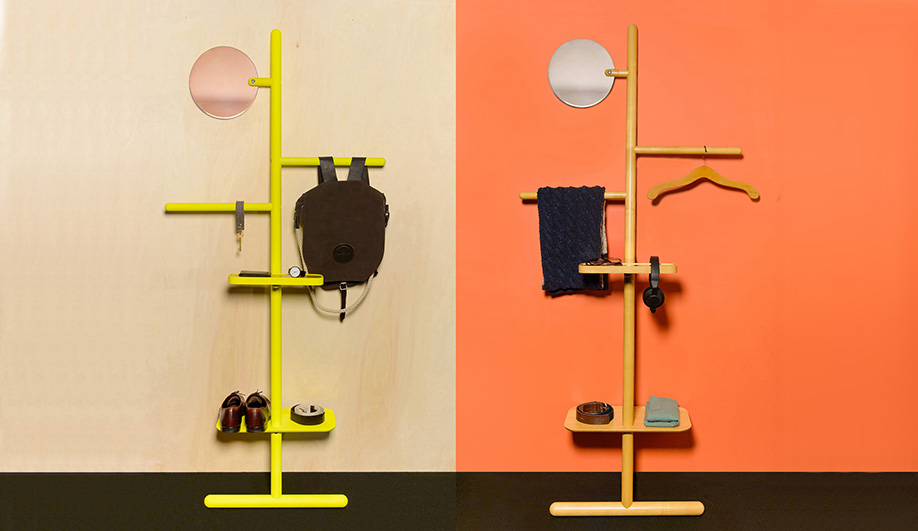 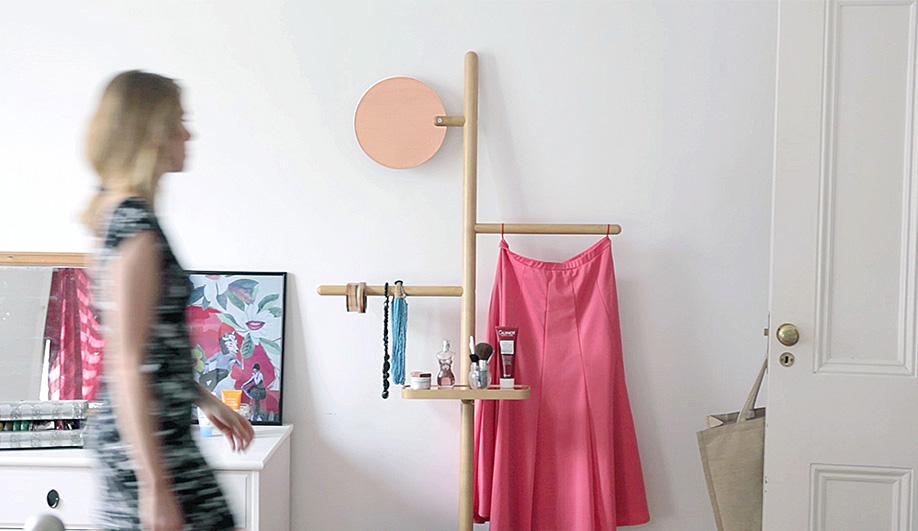 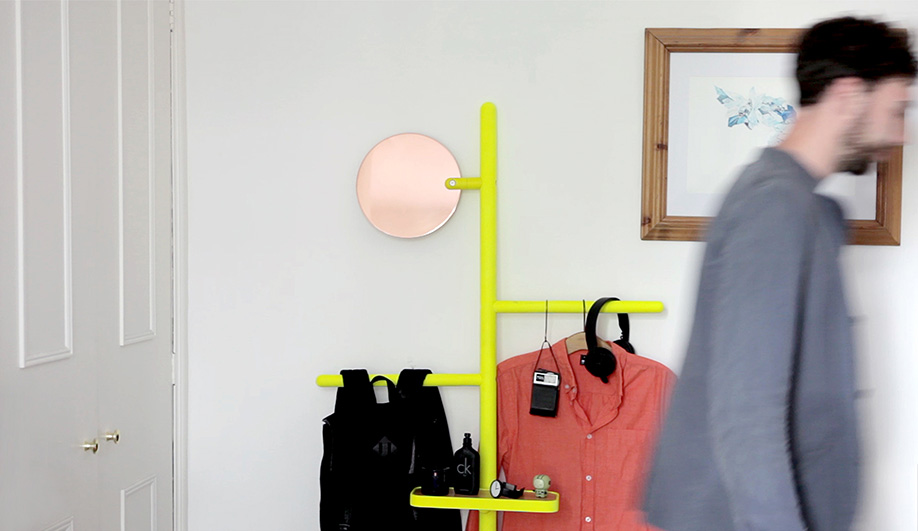 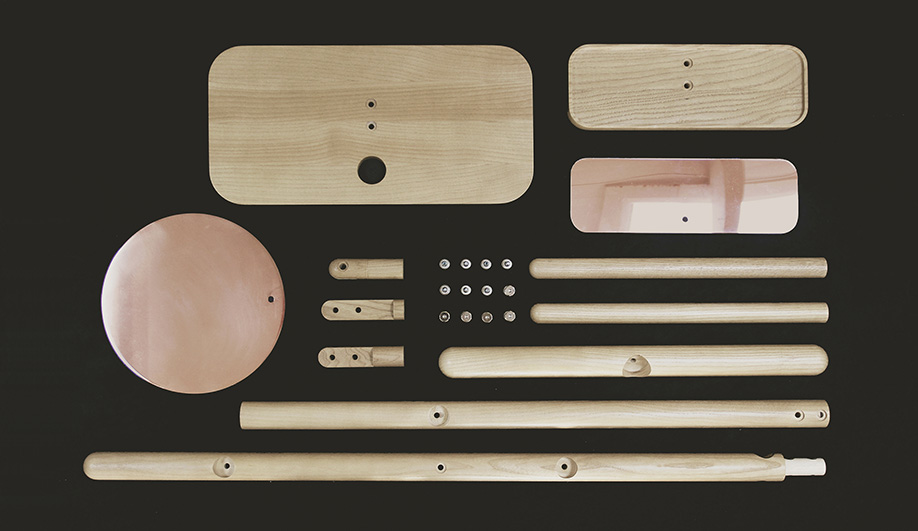 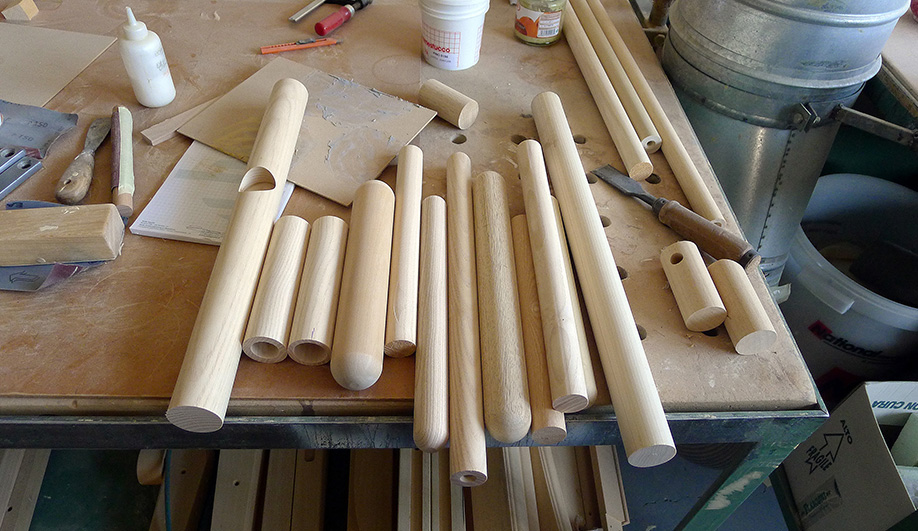 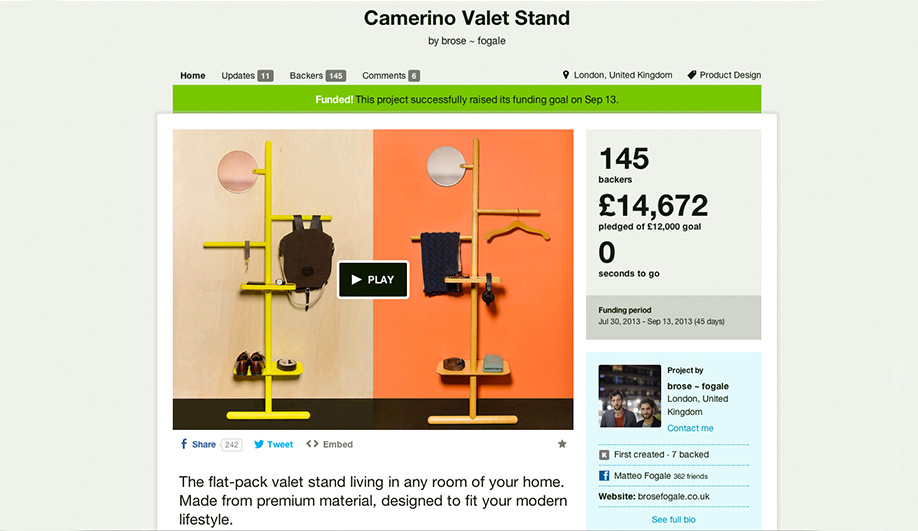 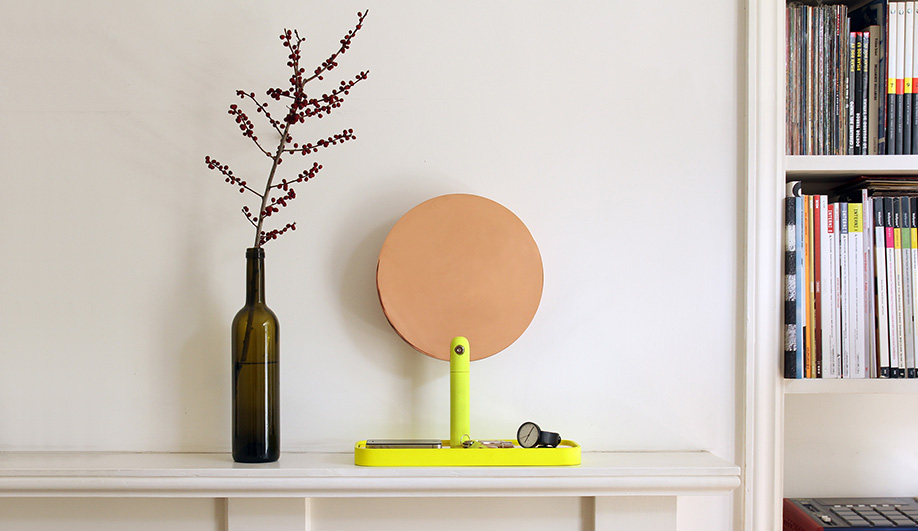 Called Camerino, the valet stand has all the makings of a successful product. It’s designed for flatpack shipping; it assembles and disassembles easily; it’s well priced for a product crafted entirely by hand; and it’s a beautiful object that many manufacturers would likely be interested in making and marketing.

Principals Joscha Brose and Matteo Fogale, however, decided to take charge of its entire production process – from design to delivery – and like many creative entrepreneurs, they turned to Kickstarter to attract their first customers. In September, they successfully raised £14,672 ($24,545) from 145 backers, surpassing their original goal of £12,000. We spoke to partner Matteo Fogale about why Kickstarter is an ideal launch pad.

AZURE: Tell us a bit about your studio Brose Fogale.

Matteo Fogale: We’ve been up and running for less than a year. I was born in Montevideo, and moved to Italy to study at the IUAV University of Venice. I worked as a designer with Patricia Urquiola and Luca Nichetto and then moved to London in 2010 to work at Barber Osgerby. Joscha Brose studied at the University of Arts Berlin and worked for Tom Dixon as an innovation and special projects designer. He was also freelancing for Terence Conran and Faye Toogood.

AZ: With such good connections, why did you decide on crowd funding as the best way to get started on your own furniture line?

MF: We wanted to start fresh, and we were both questioning the traditional way designers work and how their products are manufactured and distributed. There’s a strong spirit right now toward do-it-yourself, which is exciting, but we’re also living in an era of ongoing economic crisis. In our experience, we’ve found designers and manufacturers are too detached from the end users and that prices don’t reflect real value and quality, so we want to change that in some way.

AZ: Did you design Camerino expressly for e-commerce?

MF: We considered going to manufacturers; we even went on a business trip to Italy to meet people. But we realized Camerino was already born. It has a clever use of materials, it requires very simple manufacturing, and because it is designed for flatpack shipping, distribution is economical. From our previous working experiences we also know some very talented craftsmen and producers around the world.

AZ: How did you decide on Camerino as your first product?

MF: Josha and I first met playing football with friends who all work in the creative industry. We met up for a bit of brainstorming and quickly realized we wanted to design something that was useful for ourselves and for our friends; something that adapts to our nomadic lifestyles but is also well-made, and, more importantly, affordable.

We all appreciate quality, but it’s difficult to own heavy furniture and the only other option is cheap flatpack products. Our aim is to use premium materials in a clever way, and lightweight materials that can be moved around easily.

AZ: What other products are you planning to launch?

MF: We are planning to extend the collection to include products that relate to each other as a family, but don’t necessarily look all the same. Crowd funding is still a new thing so it’s hard to reach a wide audience that understands how it works. But we are very positive and would love to keep our business model based on this direction.

AZ: What would you say are the main pros and cons of crowd funding?

MF: On the pro side, you have total control of your business – you get to decide what you want to do, how you want to do it, and for whom. Anyone can crowd fund, no matter what their background or economic status is. It’s democratized production, where you invest a lot of time developing your project and then leave the final word to the public. This is great, though I would also say there’s a lot of risk involved.

One difficulty is the amount of time we’ve spent learning about costs, distribution, etc. It’s really time consuming. I’m hopeful it will get easier the more we do it.

AZ: What notable oversights and omissions have come up that you hadn’t anticipated before launching on Kickstarter?

MF: Fulfillment was our biggest nightmare. It’s a whole new world that is both exciting and frightening. Import taxes, shipping costs… all those steps we are now dealing with. But it’s going to make us stronger in the future and prepare us for an international market. As a start-up, I think it is always difficult to get people to trust you, so the web gives you the chance to increase trust.

AZ: What has the initial financial output been to get this project ready for crowd-funding?

MF: We’ve invested quite a lot. Although we are launching a business that is mainly online, we still live in a world of real things, and we are designers and makers of physical objects, so we still believe in showing our work. In April, we exhibited some of our prototypes at the Milan furniture fair and we received amazing feedback from people who were able to see and touch the product. It got us motivated and helped give us the confidence to start the crowd funding campaign.

AZ: Crowd funding is still a relatively new way for designers to produce and distribute. In your view, how has the design industry changed in the past few years that now makes crowd funding a logical route.

MF: We have all been influenced by the Internet in some way. Our work is influenced by likes and dislikes, and trends are much easier to spot thanks to blogs, Tumblr and Pinterest. With crowd funding, the final word comes from the user who gets to decide whether they want our product or not. Internet users are like the marketing departments for a new studio practice.

AZ: Why is the old model of designing for a manufacturing no longer working?

MF: We like to be in control of everything we do, and we have access to any kind of information we want. All we need is the will to learn. The old model no longer works because the market continually changes. The way we do commerce changes and the tools change, so we have to change, too.

Royalties used to work when a manufacturer was investing in a piece of furniture that was meant to stay in production for a long time. Nowadays, they are seeking out low-cost manufacturing and quick turnarounds. That kind of production needs to be updated often. The market life of a product is also much shorter.

Big manufacturing requires extra costs and that in turn inflates the final cost of a product. Meanwhile, small manufacturers are more flexible; they have less stock and overhead, and they can manage direct distribution. All of that makes a product more affordable.

AZ: Do you think crowd funding is here to stay for young designers?

MF: It’s becoming a popular and successful tool. I’m sure more designers will make use of it, but this will change too, as everything does. I’m already wondering what’s the next thing?

Brose Fogale is featured in our October 2013 story ”We Made It” (page 94), the precursor to the five interviews we are posting in our online series. Past interviews: Carrot Concept on Collaboration and Luca Nichetto on Designer-Led Manufacturing. Next week, we will be speaking to Andrey Grishko of AndreyandShay.