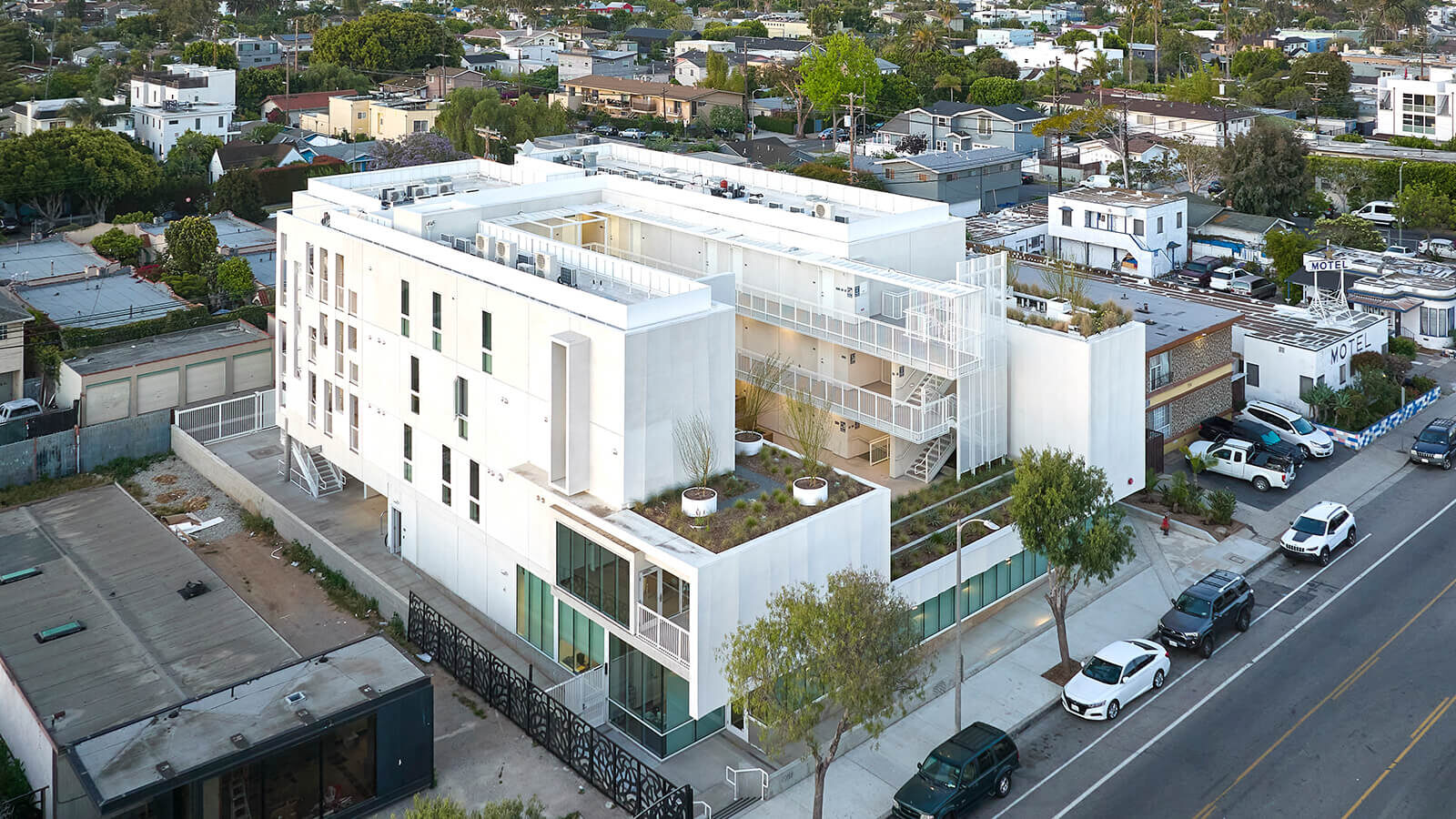 A New Paradigm for Affordable Housing in L.A.

When the Venice Community Housing Corporation set out to find a site for an affordable housing development to serve young adults who have “termed out” of youth facilities (most of whom end up on the streets), the non-profit struggled to find a reasonably priced plot in the sought-after L.A. neighbourhood of Venice Beach. That is, until their architects suggested a site that was right under its nose — the organization’s office, which housed its social services. Recognizing an opportunity to develop a mixed-use complex that better fit the context of the rapidly urbanizing neighbourhood, local firm Brooks + Scarpa razed the one-storey structure, erected in the 1970s, to create an urban infill dubbed the Rose Apartments.

Finding a suitable site was not the only challenge the client encountered along the way. The neighbourhood, which was once a neglected low-income area — characterized by housing projects built with little concern for residents — was now both a trendy tourist destination and a desirable residential zip code. As affluent residents moved in, driving up the cost of real estate, the neighbourhood council also rejected each and every affordable housing proposal that had arisen over the past seven years. 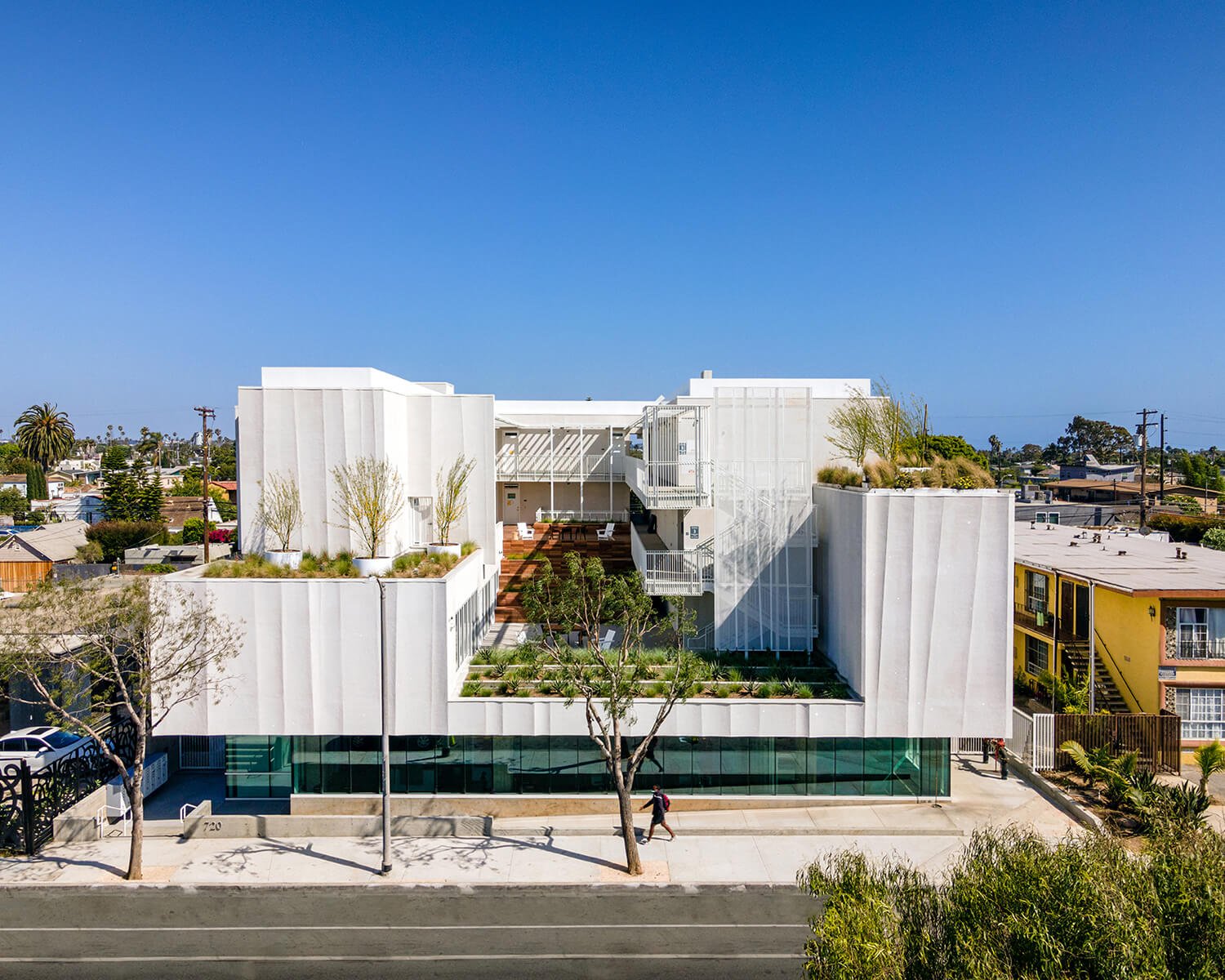 To avoid meeting this same fate, the design team at Brooks + Scarpa conducted four public community consultations (two with the Venice Neighbourhood Council and two with the L.A. Planning Commission), as well as smaller group meetings with community organizations and stakeholders, modifying the design based on their feedback and concerns. Though approved by the Planning Commission, the development was initially rejected by the neighbourhood council before the firm’s design won them over.

The resulting four-storey mixed-use building combines 35 affordable units with 185 square metres of office space for the Venice Community Housing Corporation. Co-opting L.A.’s signature courtyard housing typology — and inspired in particular by Horatio Court (designed by Irving Gill in 1919) — the complex “eschews solid walls and fences” that define traditional housing projects, instead opening itself up to the street. 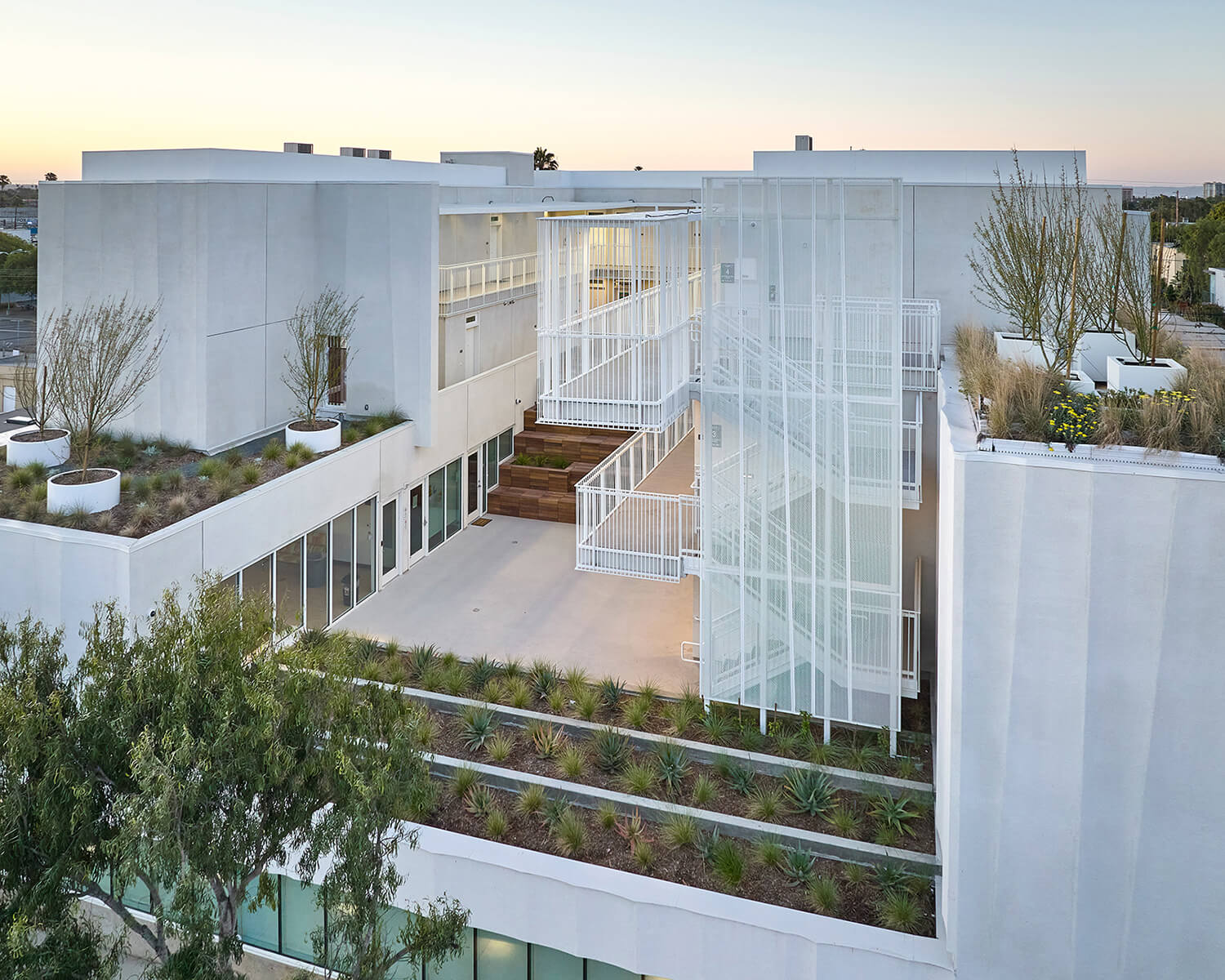 The building’s densely packed studio apartments radiate around a raised courtyard carved out of the second storey, maintaining a pedestrian-oriented street edge at ground level. Though the outdoor gathering space is open to the eclectic thoroughfare of Rose Avenue, cascading planters and the raised elevation provide a degree of privacy and physical separation, mediating between the residence and its urban context. “Capped by the planted terraces on the upper levels, the courtyard establishes a ‘picture-frame’ that provides views, ample natural light and breezes, and the creation of a sense of place,” the architects explain. 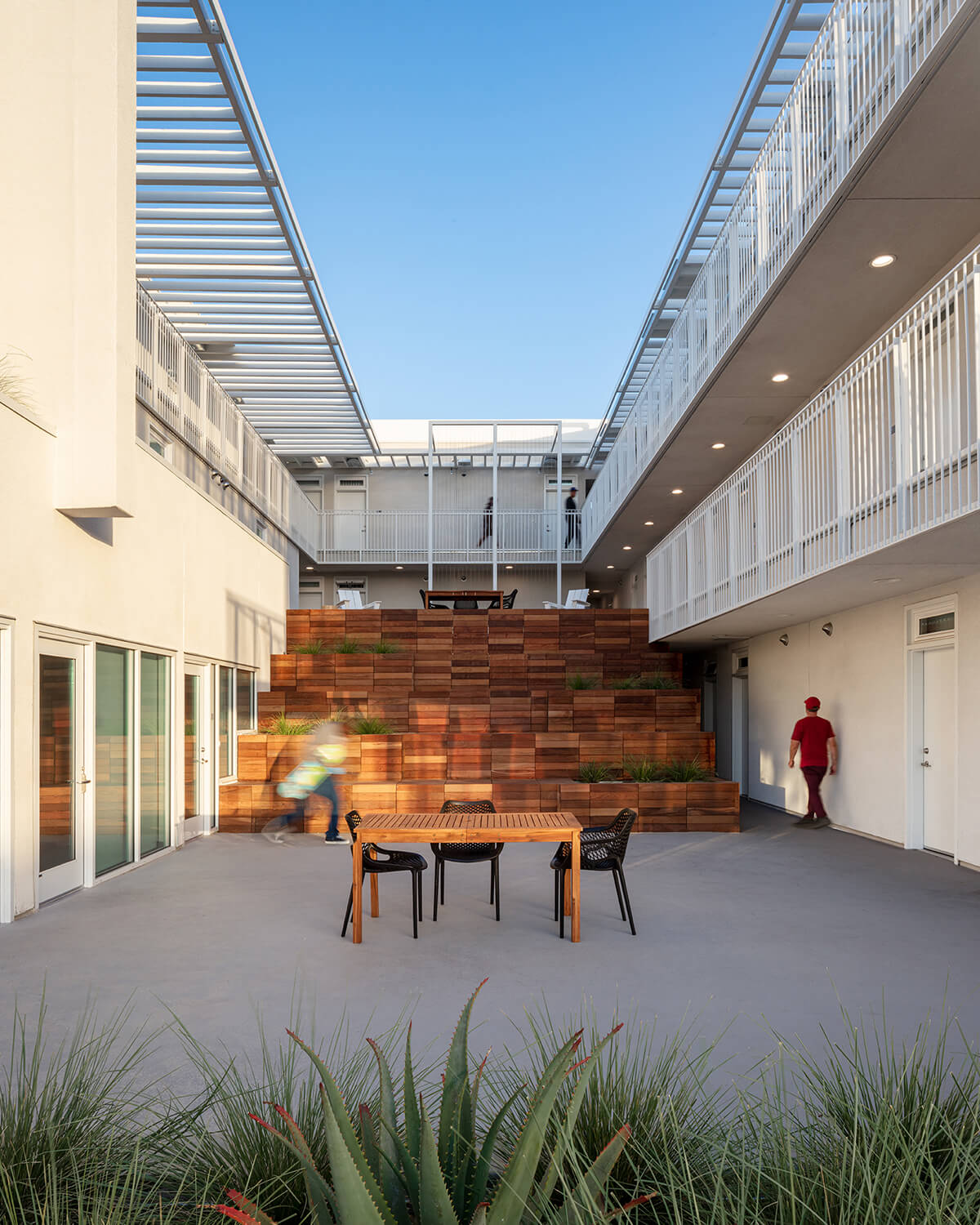 Replete with lush landscaping and ample seating, this interactive social space is just one feature that sets the Rose Apartments apart. While living in affordable housing is often accompanied by a sense of shame, the design seeks to create space for community in a typology that can be reclusive and isolating. Strategically placed windows overlooking the courtyard allow residents to feel connected to each other despite physical separation, with a bonus of reduced street-noise due to the units’ inward-facing orientation. 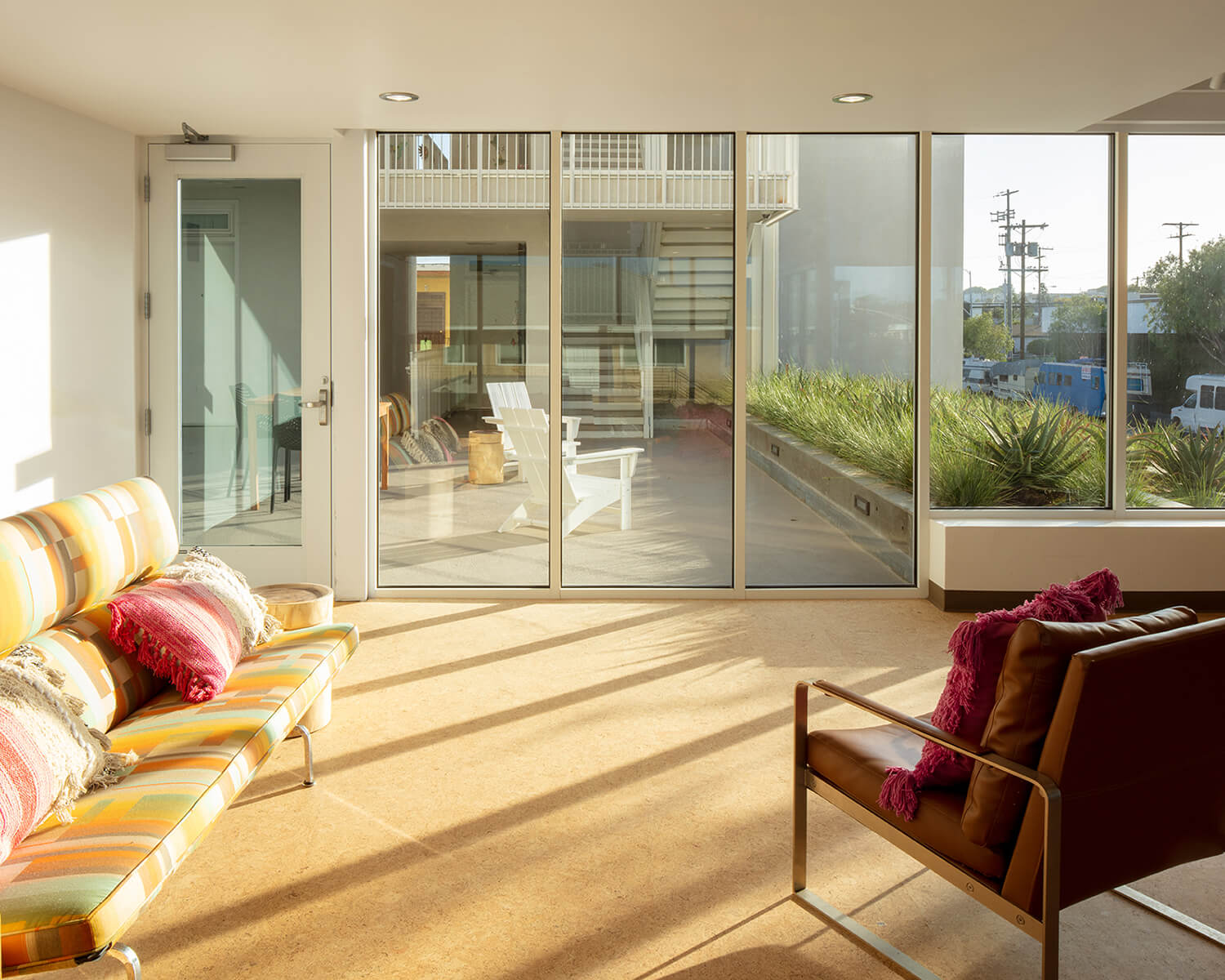 This social ethos filters into every key design element, including the circulation spaces. With the elevator tucked out of the way, an open path and exterior stairs provide opportunities for spontaneous interaction between residents, while the courtyard offers a safe and secure route that connects the street to the apartments. 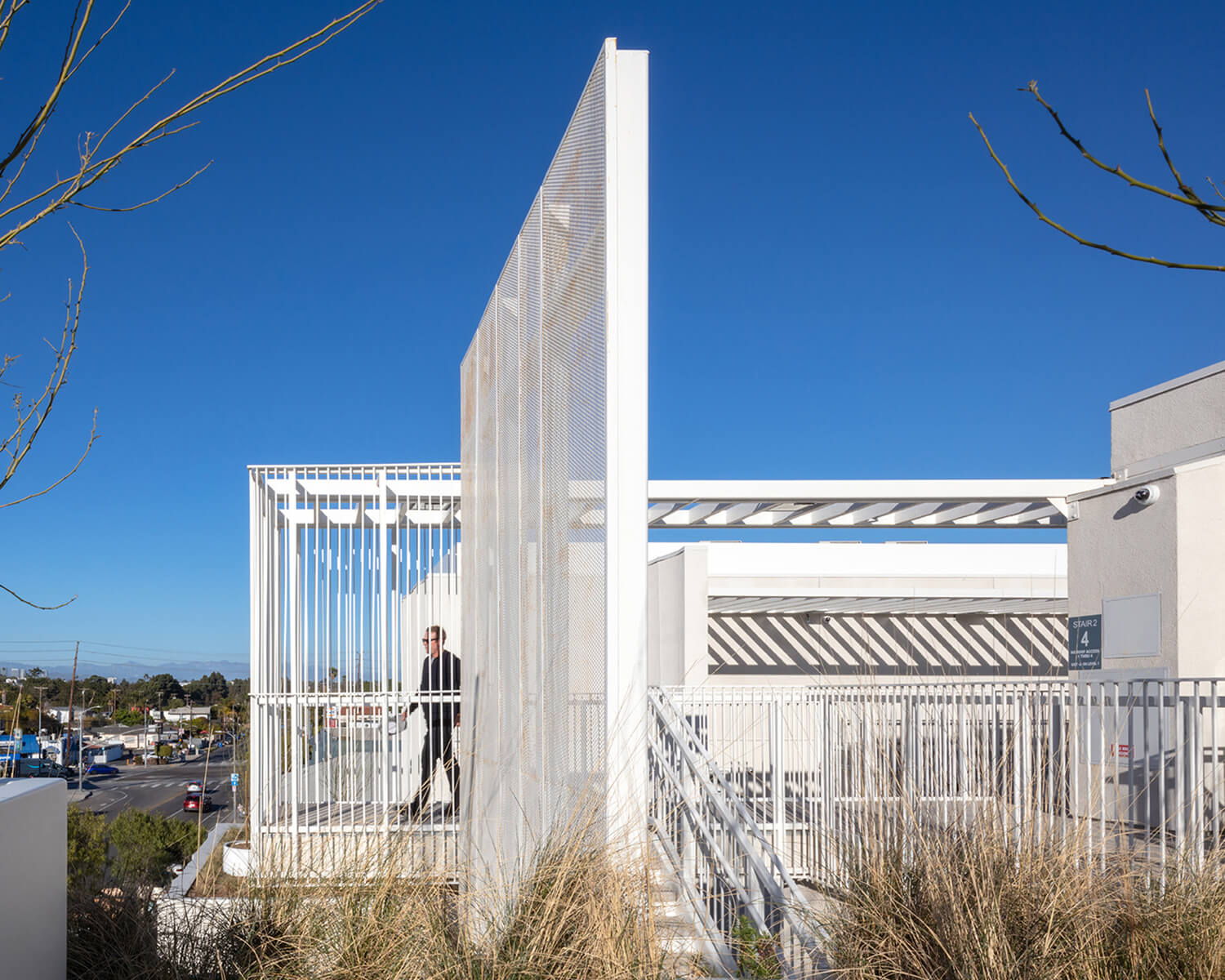 Taking advantage of California’s Bill AB763, which allows increased height and density for projects that include affordable housing, the architects brought the area average from 20.64 to 90 units per acre. While the complex generally increases housing stock in the notoriously low-supply city of L.A., it also provides opportunities for youth in an affluent area where low wage workers are in high demand but unable to afford the cost of living. 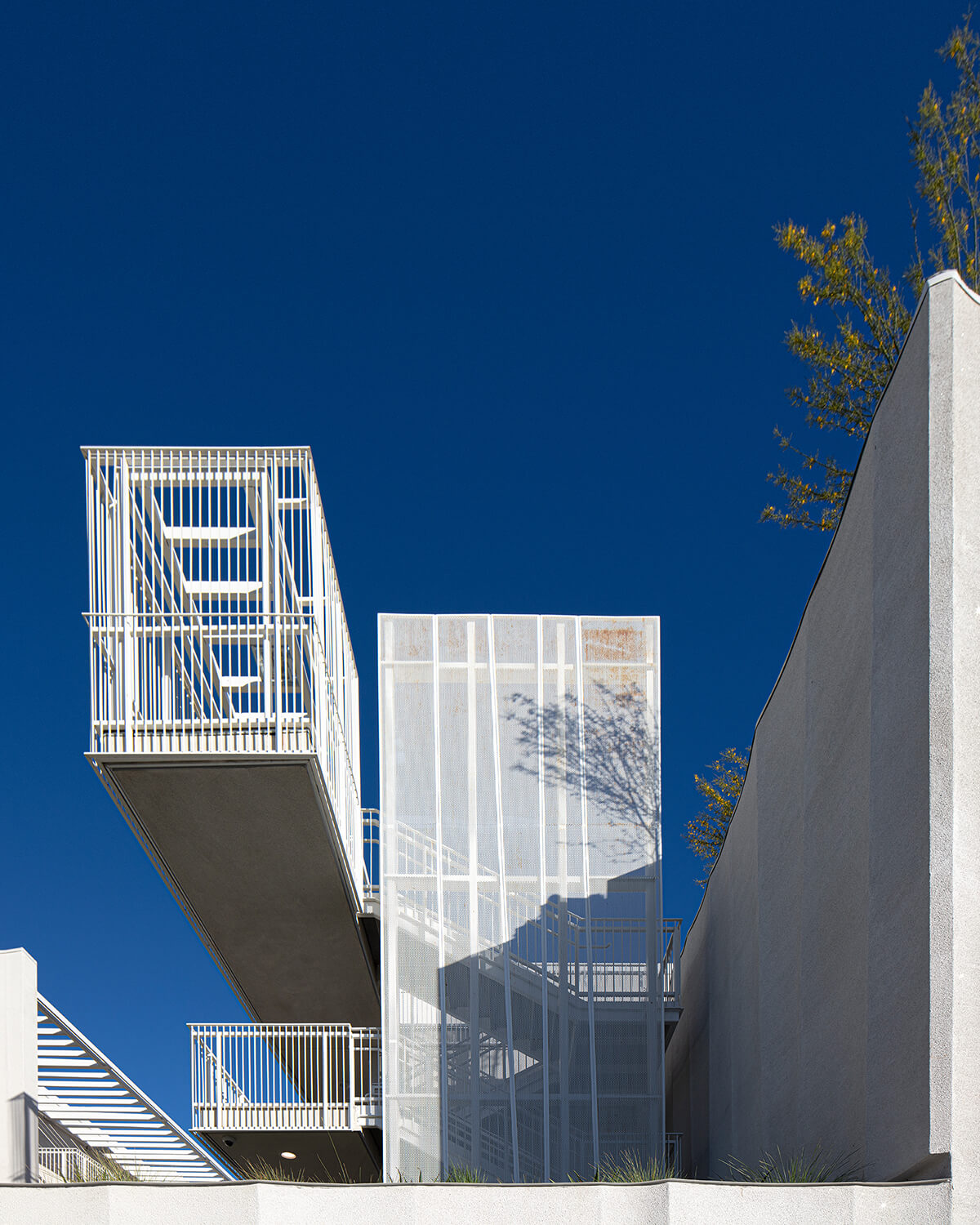 The Rose Apartments are a pedestrian haven, just a five-minute walk from myriad community amenities (and job opportunities) including a park, grocery store, convenience store, laundromat, hardware store, restaurants and shops — and just seven blocks from the beach. As the building is also adjacent ample transit and bike lanes, most tenants don’t require a car, which allowed the architects to reduce the number of vehicle parking spaces on site by 63 per cent.

Instead, a large bike room is located on the ground floor, while the front yard features short-term bike parking for guests. And the architects thought ahead: When vehicles become scarce, the on-grade garage can be easily adapted for future uses. 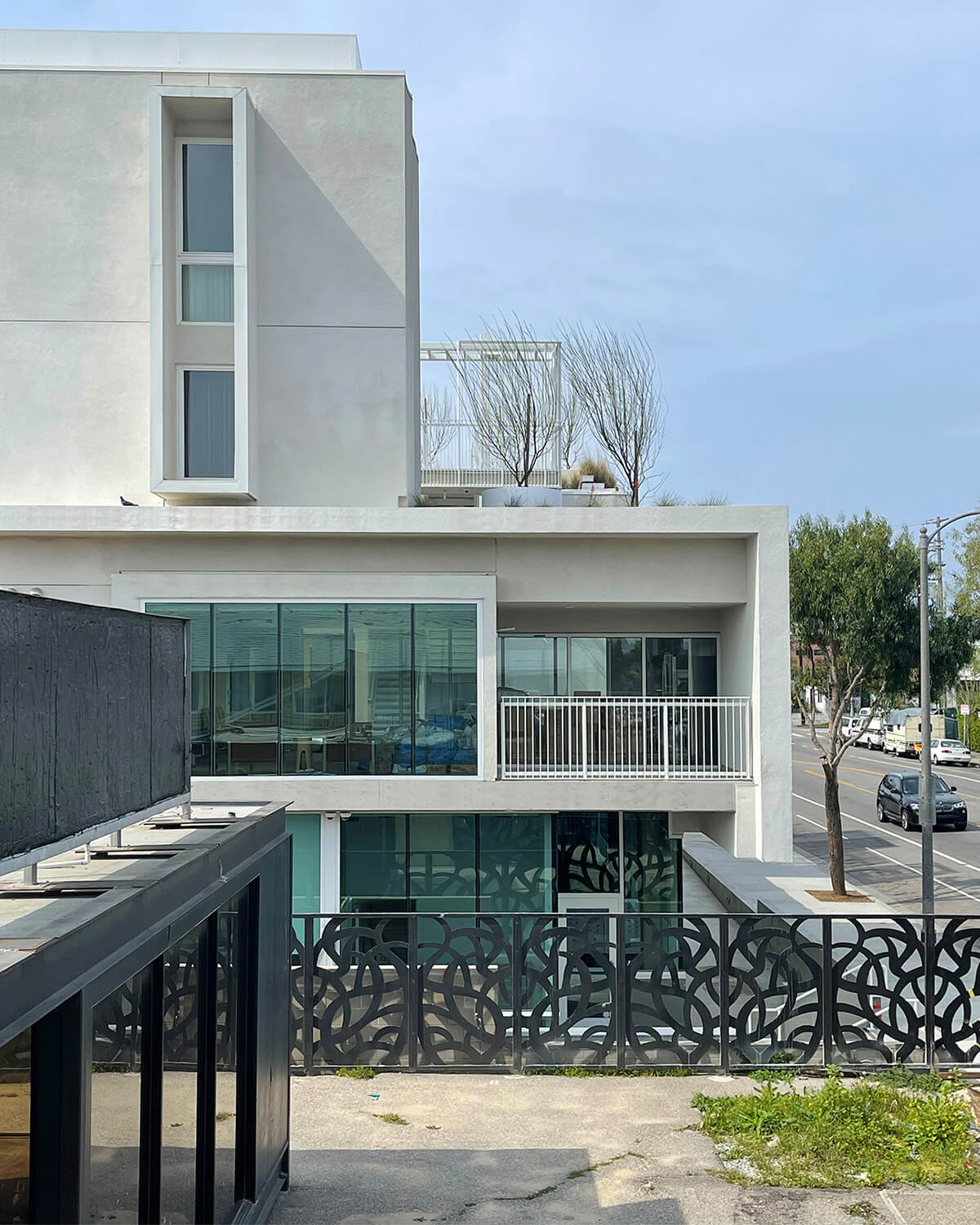 From the street, the facade solidifies the complex’s role as a community beacon. Like many nearby structures, the Rose Apartments exterior is made of cement plaster, which Brooks + Scarpa elevated with a scalloped texture that adds depth and detail. The firm also applied a sparkle grain to the surface that allows it to shimmer as pedestrians pass by, reacting to the natural light depending on the time of day. 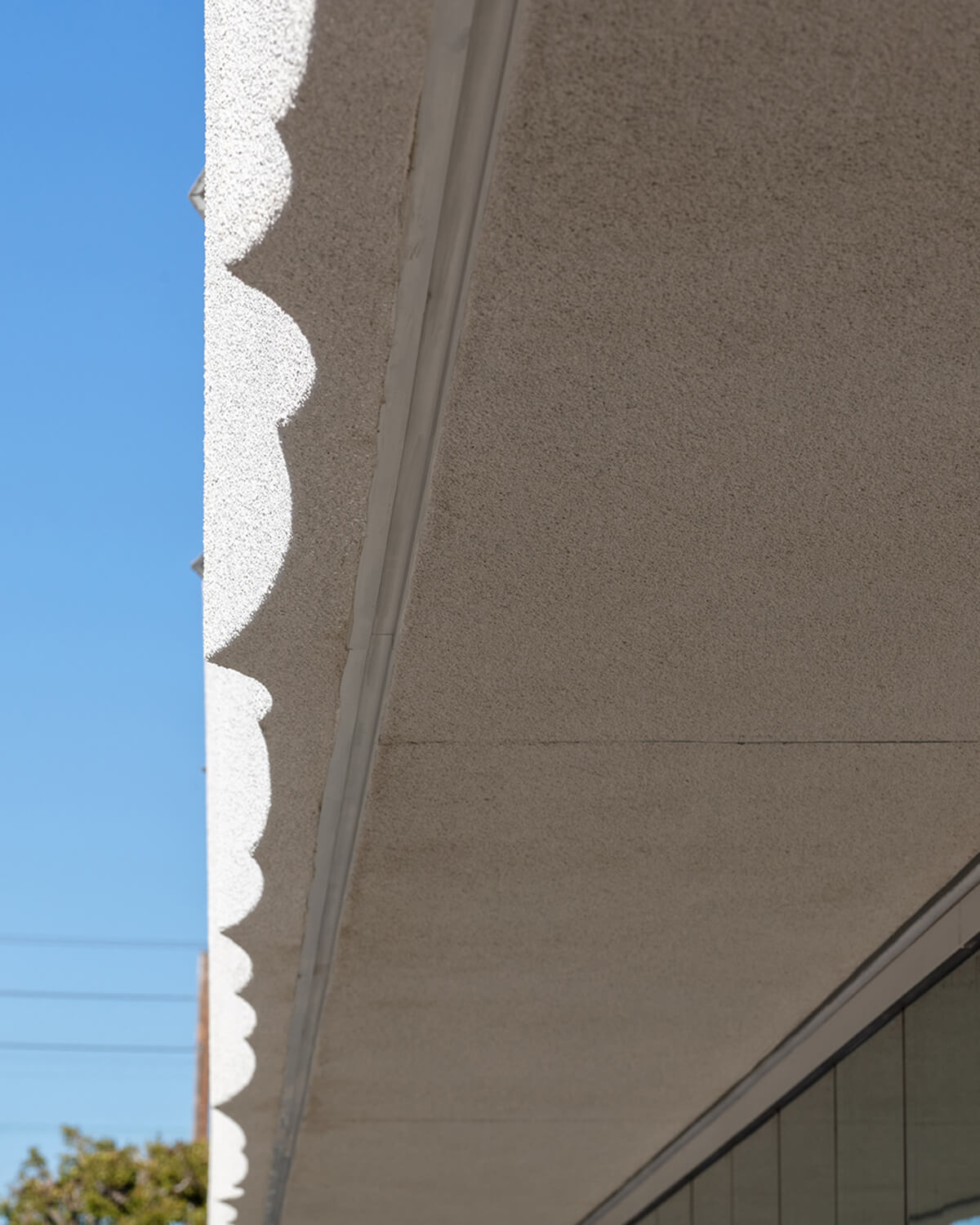 But in addition to its beauty, the Rose Apartments was also assessed to be 55 per cent more efficient than the national average. Rated LEED Gold, the building employs passive design strategies, including orientation for natural ventilation, with windows also positioned to maximize daylight, and 95 per cent of the floor area having direct views to the outdoors. Solar panels on the roof are utilized to heat domestic hot water (especially effective in the sunny California climate). And, nearly all of the construction waste was diverted from landfill.

Aside from the building itself, the architects have radically transformed the site from a completely impermeable plot to 30 per cent landscaped or permeable surfaces. Now, flow-through planters act as swales, while drought-tolerant plants and gravel provide storm water retention and animal habitats. The building can also capture and treat 90 per cent of the annual rainfall. Meanwhile, the use of low flow fixtures saves approximately 38 per cent of water, while passive measures and shared mechanical and plumbing systems bring down utility costs for residents. 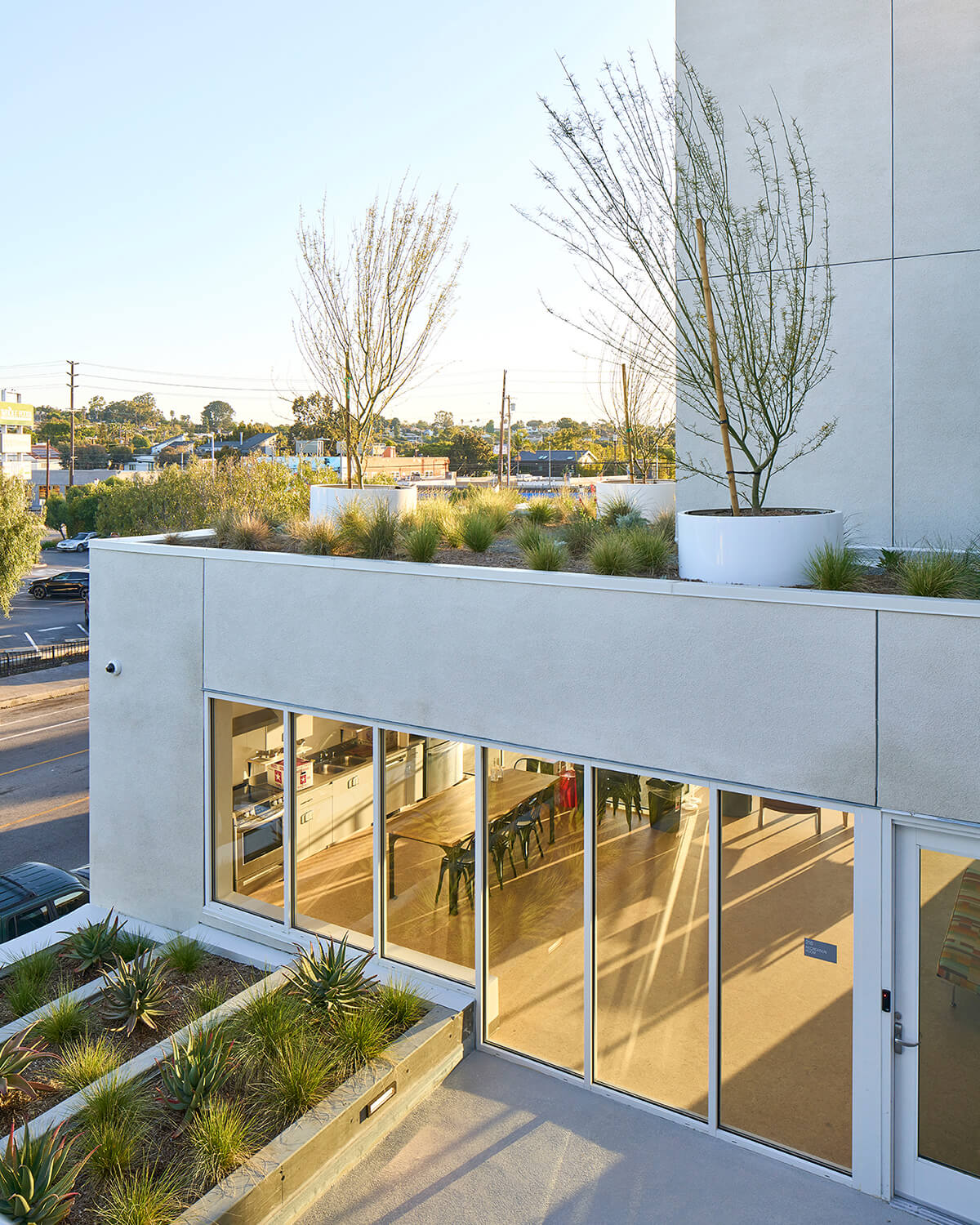 Designing to this standard while adhering to the non-profit’s strict budget was no mean feat. It was imperative that the building have minimal maintenance costs, hence the use of passive strategies, increased insulation and a white-coloured green roof which mitigates heat gain. The firm saved costs and reduced waste through low-maintenance, locally sourced and recycled materials, framing efficiencies and stacked floor plates and shear walls. With these measures in place, the building is designed to last a minimum of 60 years. 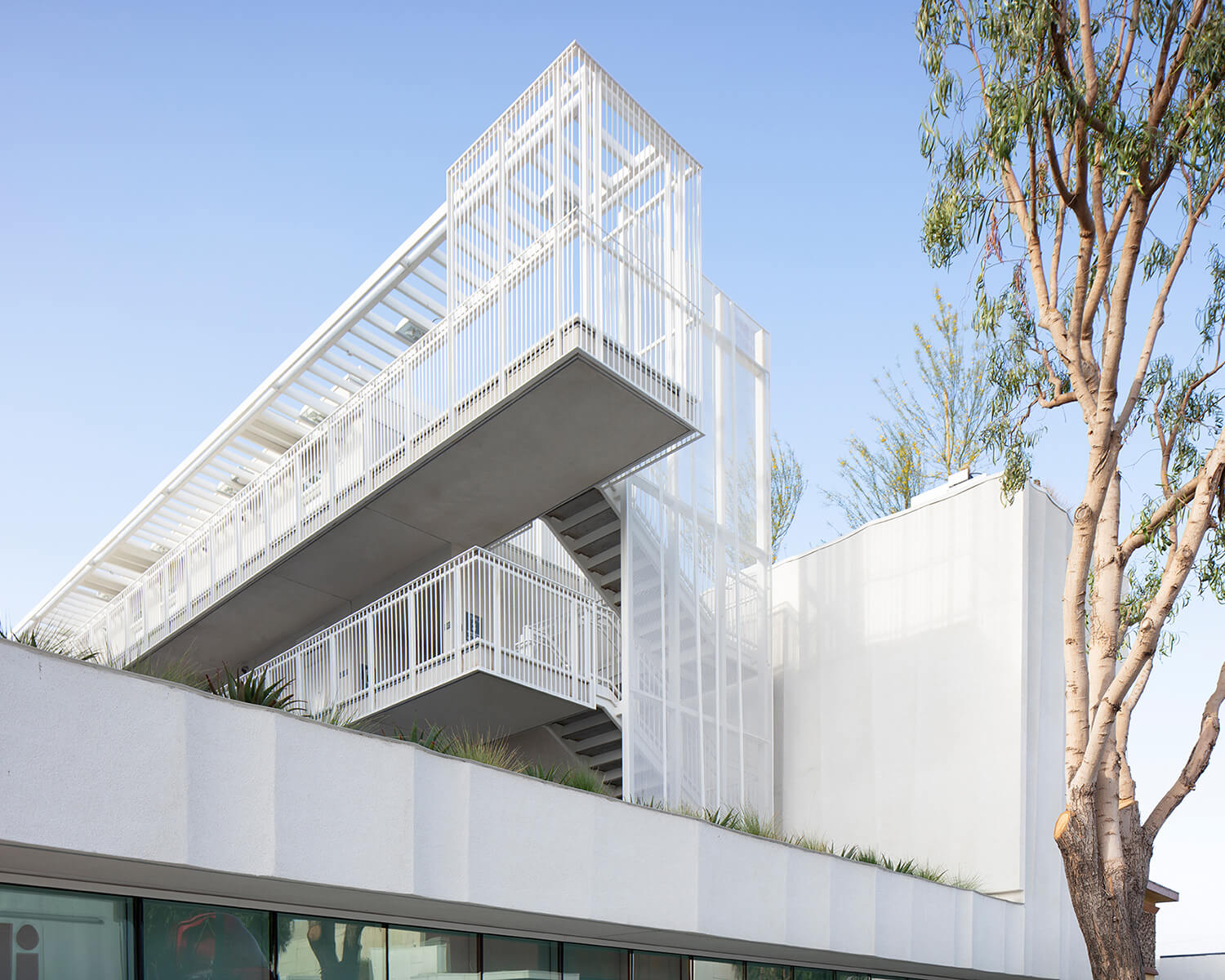 A fixture of L.A. neighbourhoods for over a century, the courtyard typology still proves to be a viable alternative to sprawl, and essential to pedestrian-oriented neighbourhoods. “More than any other multi-dwelling housing, courtyard apartments make you feel like you belong to a place,” says Ken Bernstein, director of preservation for the Los Angeles Conservancy. 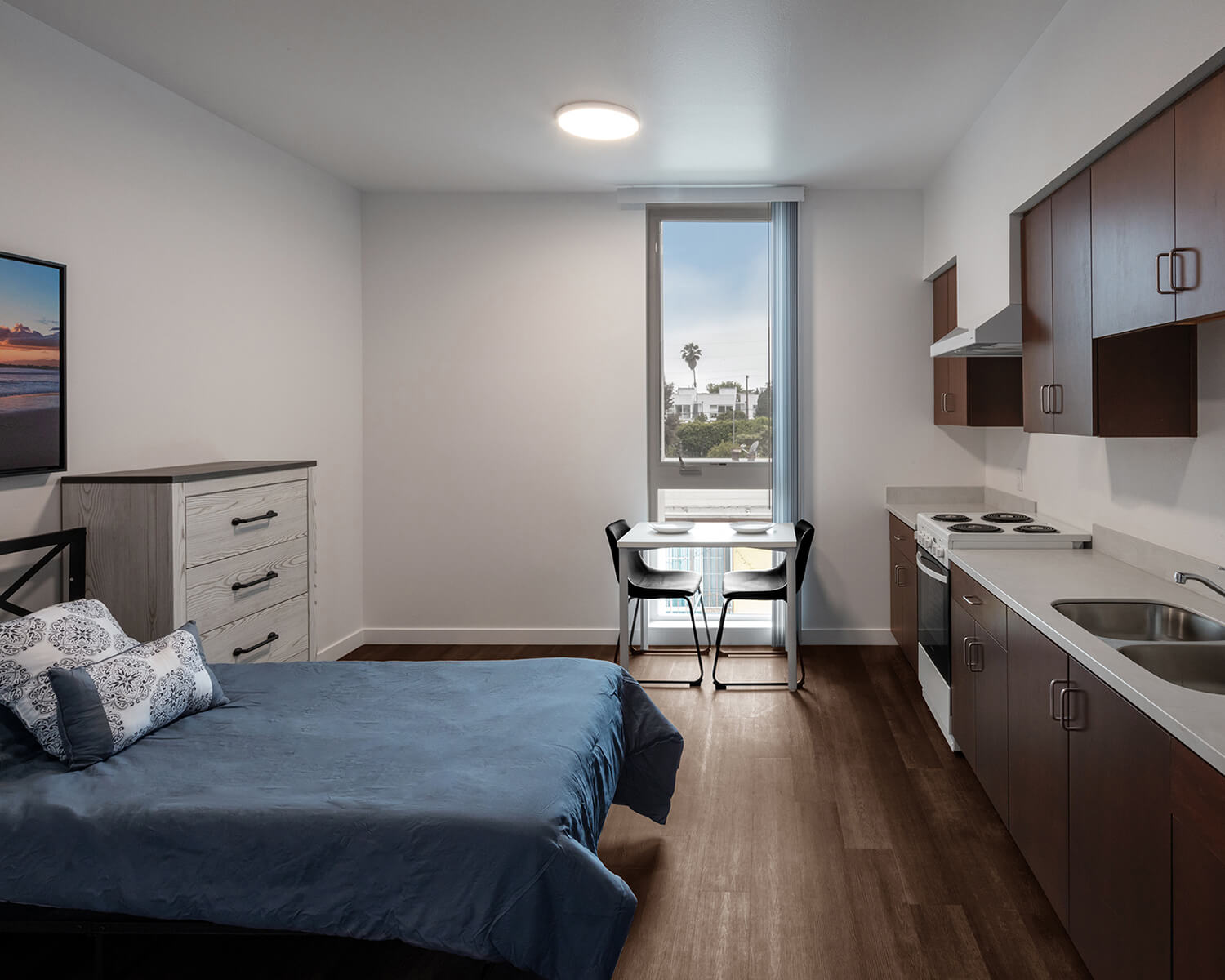 The latest addition to Brooks + Scarpa’s growing repertoire of mixed-income and affordable housing, the Rose Apartments form a case study in how to design for density, sustainability and community. It’s this very mission that earned the firm the 2022 AIA Gold Medal. “Success for us is not winning the gold medal. We want to make great spaces and great places for people and I think what we see sometimes is a lack of design in places where it should be. We purposefully pursued affordable housing projects at a time when no architects were doing it,” explains co-founder Angela Brooks.

The firm is always learning from its experiences, keeping detailed spreadsheets of project costs and energy efficiency measures so it can continue to meet increasingly stringent requirements. As a leader in affordable housing design, Brooks + Scarpa believes in passing on this knowledge, and have even given tours of its project to the AIA, students and City of LA planners with the hope that future designers will follow this inspiring precedent. “Designers can actually create a built environment that harms people or helps people and so when you talk about this idea of design it’s really a serious thing. And I think our vision is that we use it to help people and to really try and improve people’s lives,” Brooks says.