Domino Park Turns a Former Sugar Factory into a Sweet Deal for Brooklynites
The riverside green space by the makers of the High Line aims to connect New Yorkers to both their waterfront and industrial history. 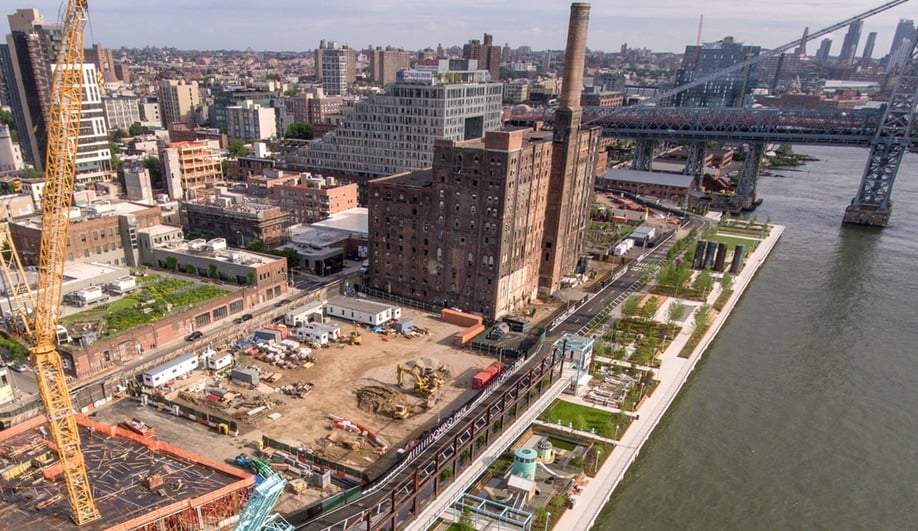 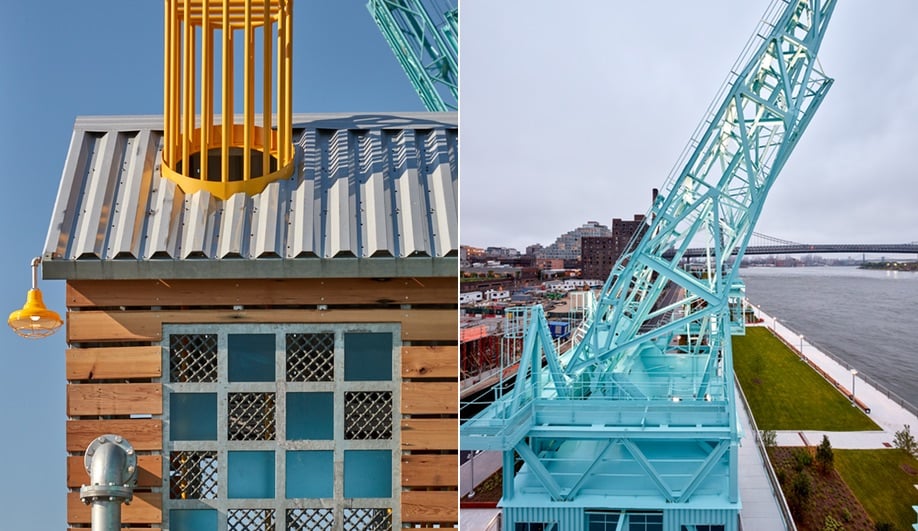 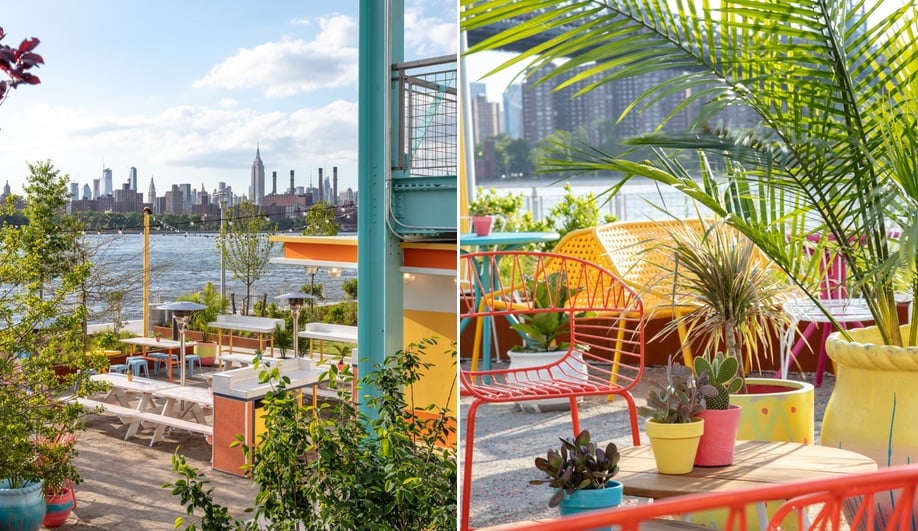 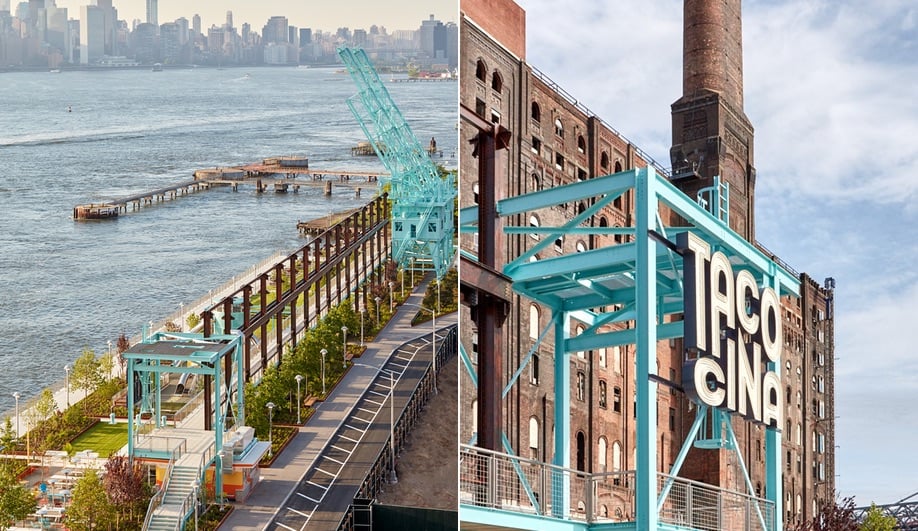 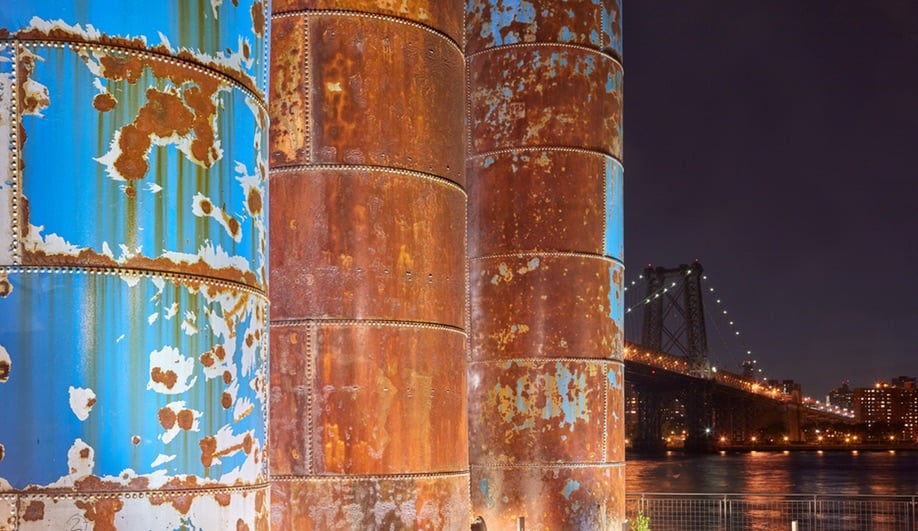 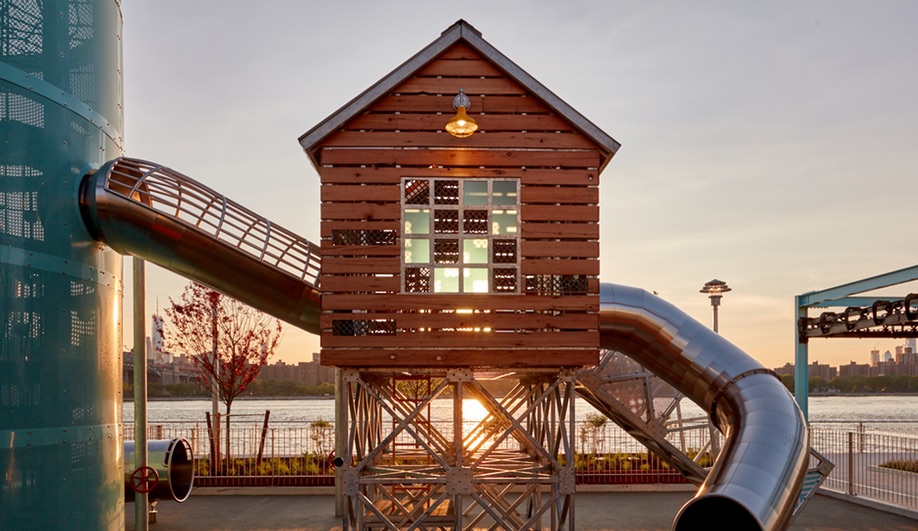 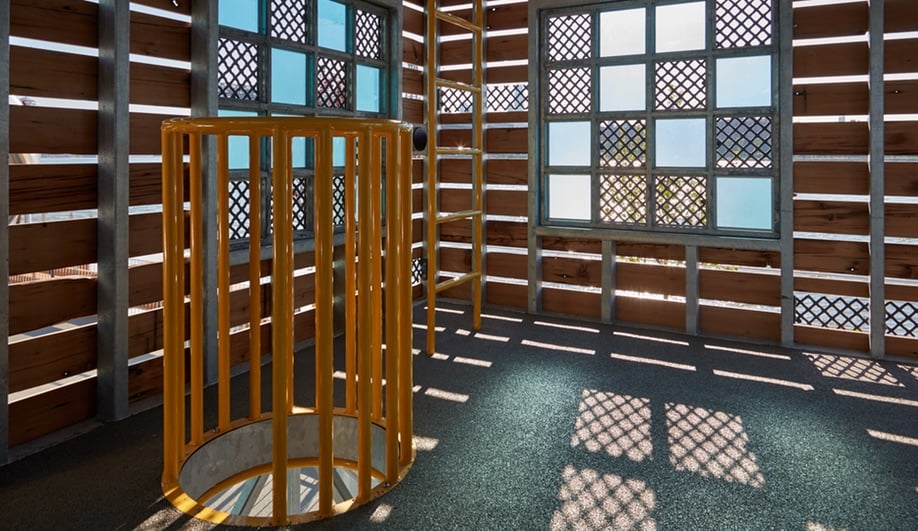 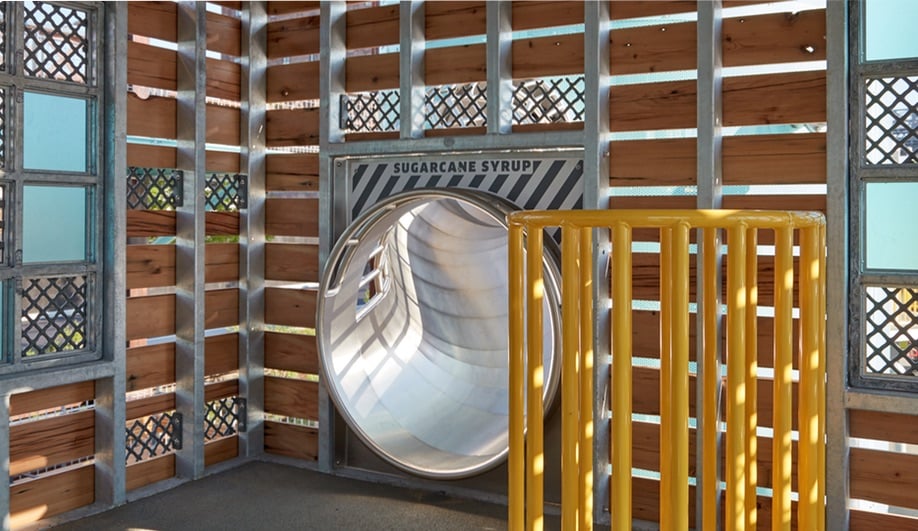 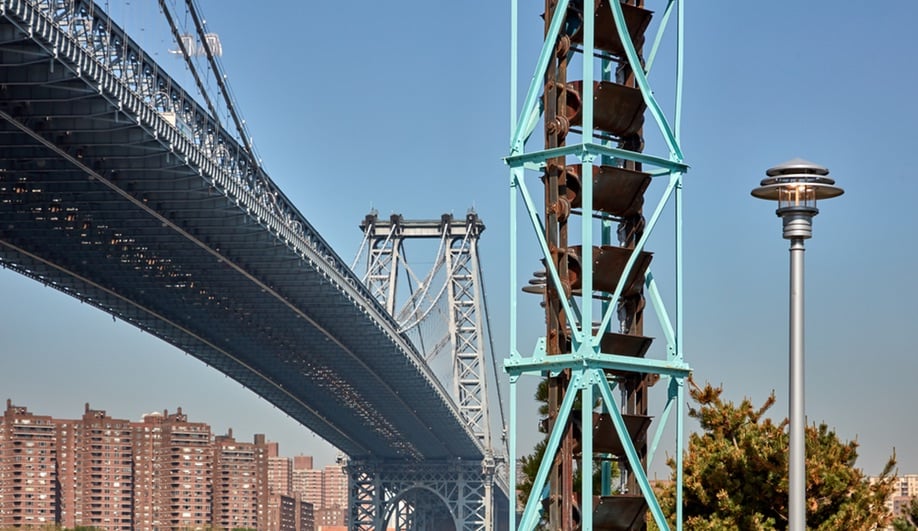 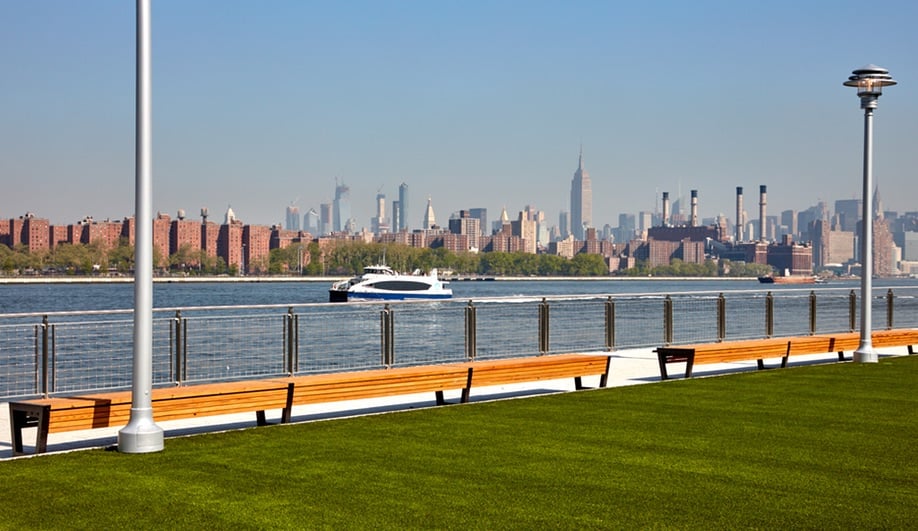 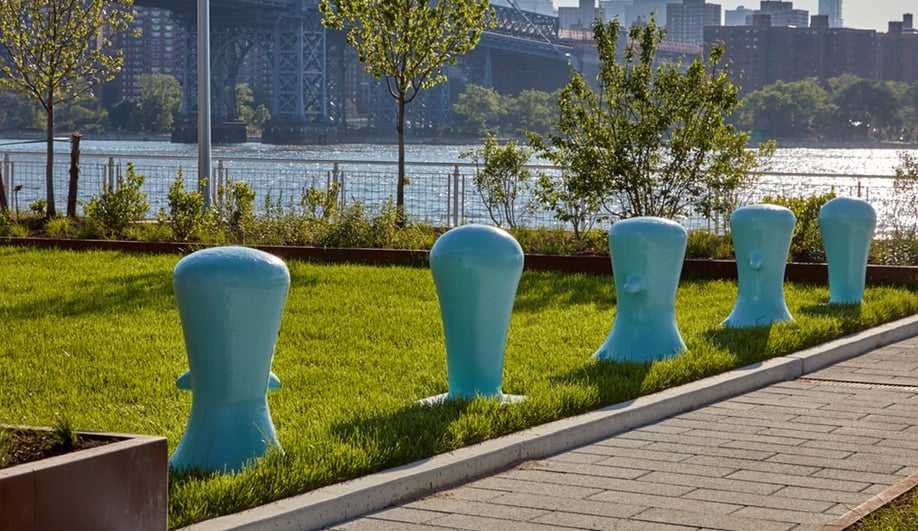 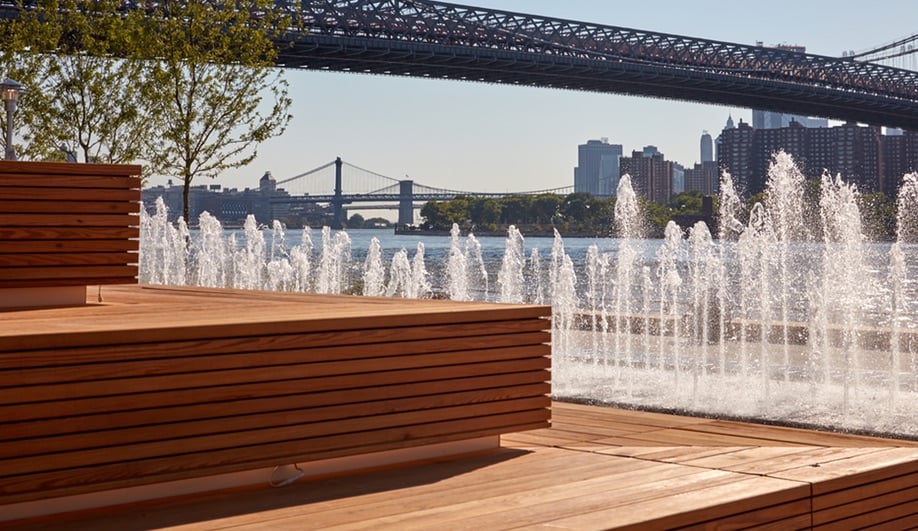 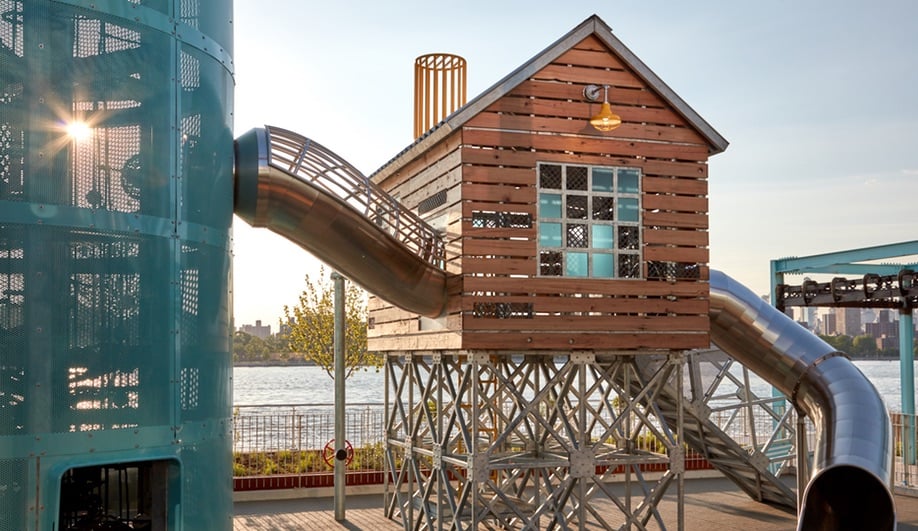 Over the past several decades, a host of new urban parks have materialized worldwide in the unlikeliest of places: atop defunct railway trestles in Paris and Manhattan, along a restored Seoul stream bed once covered by concrete, underneath an expressway in Toronto. One of the latest such projects is Domino Park, a riverside green space on a Brooklyn site formerly occupied by a sugar factory, the disused components of which have been integrated into the design.

“We were deeply inspired by community input and the site’s rich history when creating Domino Park,” says Lisa Switkin, senior principal of James Corner Field Operations, the New York-based landscape architecture firm that also designed the High Line. “The design will reconnect New Yorkers to the East River waterfront and foster interest in the history of the site and the surrounding neighbourhood.”

Opened to the public in June, the 2.4-hectare linear park stretches for about half a kilometre along the East River just north of the Williamsburg Bridge, an area that had long been off limits to the neighbourhood around it. For generations, the site was occupied by the Domino Sugar Factory, which refined some 1.8 million kilograms of sugar every day at its apex. Eight years after the factory closed in 2004, the plot was purchased by Brooklyn-based Two Trees Management, which spent US$50 million to establish the new park and currently manages it.

“Domino Park will hopefully serve as a living, breathing tribute to thousands of Domino workers, their families and the rich tapestry of history that defines this New York community,” Two Trees’s billionaire CEO, Jed Walentas, said when the park was unveiled on June 10.

Among the industrial artifacts and remnants that have been integrated into the park’s design – mostly along the five-block-long Artifact Walk at the north end of the site – are 30 large-scale pieces of salvaged factory machinery and other components, including mooring ballards, 24-metre-tall gantry cranes, a hoist bridge, screw and bucket conveyors, four syrup tanks and 21 warehouse columns that now support an elevated walkway. Artifact Walk’s design also includes 178 linear metres of repurposed crane tracks from the site.

A passive recreation area at the northern end of the park encompasses a Japanese pine garden at the entry, a 100-person picnic area, a food kiosk (the taco stand Tacocina, developed and operated by famed restaurateur Danny Meyer’s Union Square Hospitality), a children’s playground inspired by the sugar refining process, a large sloping lawn and an urban beach with a flat shaded lawn area and chaise lounges.

The active recreation area at the other end of the park consists of interactive spaces such as a 162-square-metre linear dog run, two bocce courts, a 585-square-metre playing field for various sports and a full-sized beach-volleyball court.

In the middle is a plaza – Water Square – offering five separate gathering spaces, including a four-tier seating area. A planned square fronting Williamsburg’s Kent Avenue is slated to be completed in tandem with the restoration of the site’s landmarked refinery building.

In addition to its many amenities, Domino Park offers panoramic views of Manhattan’s skyline and the Williamsburg Bridge from a 366-foot-long esplanade that provides a continuous walking route along the river. Because this area of Brooklyn was hard hit by Hurricane Sandy in 2012, the park’s platform was raised up to two metres above FEMA’s upgraded flood-elevation standards to protect it against storm surges and flooding. A sustainable plant palette – including a mix of nearly 175 trees – contributes to coastal resilience.

A key suggestion of the site’s master plan, conducted by SHoP Architects, was the extension of a formerly dead-end street in order to connect it to the park, thereby linking the new green space to the surrounding street grid.

This “purposeful urban gesture,” as the architects describe it, should do much to draw people living in the community to the waterfront, “so that the park becomes a part of daily life for tens of thousands of local residents who live in close proximity to the river but have historically been walled off from it.”

SHARE
Twitter, Facebook, LinkedIn, Pinterest, Email
TAGS
Architecture, Landscape, Urbanism,
AZURE is an independent magazine working to bring you the best in design, architecture and interiors. We rely on advertising revenue to support the creative content on our site. Please consider whitelisting our site in your settings, or pausing your adblocker while stopping by.