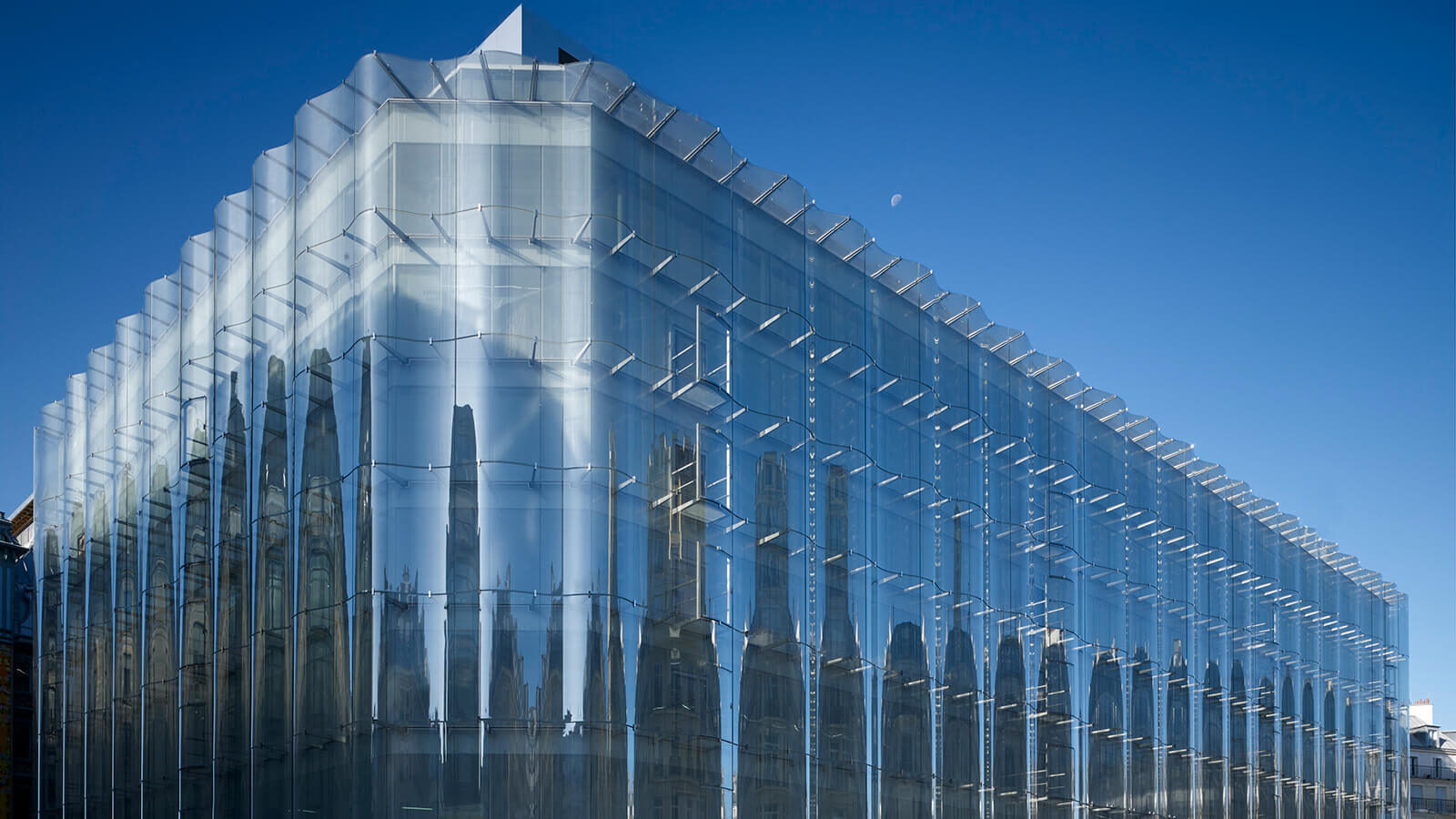 In 2005, the iconic La Samaritaine department store was forced to shut its doors when inspectors discovered that the building was not up to code. A relic of the Art Nouveau and Art Deco movements, the store remained a paradigm of Parisian style, but — at the expense of preserving its heritage elements — it had not been updated to meet modern fire and safety regulations. After years of consultation with the City of Paris, Japanese design firm SANAA was dealt a daunting task: how to keep the rich and storied history of La Samaritaine alive, while crafting a space that is relevant to today’s retail landscape? 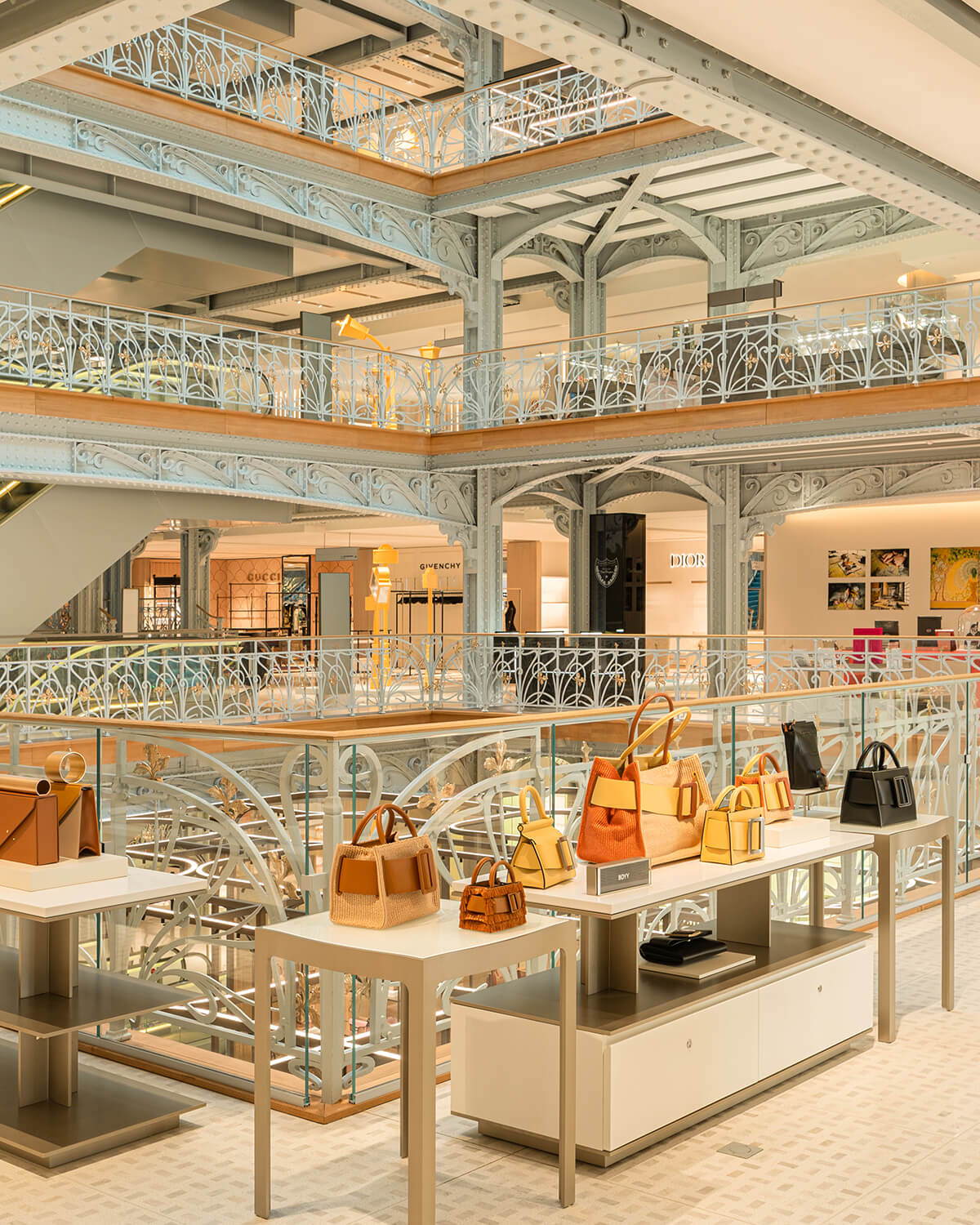 Founded in 1870 by Ernest Cognacq, La Samaritaine began as a humble shop at the corner of Rue de la Monnaie and Rue du Pont-Neuf. Its name, presumably, was derived from the statue of the Samaritan woman at Jacob’s well, which was erected at the pump house on the Pont Neuf bridge in 1603. The concept: a “world in a store,” where you could find anything you needed. The proto-department store quickly became a hit, earning over one million francs in revenue within 5 years. But it wasn’t just a store: the owners cared deeply about their employees, offering social housing, a hospital, retirement home, gym, and nursery all within the original building. In honour of the Cognacq-Jaÿ family, the newly renovated complex incorporates a nursery and 96 social housing units, accounting for 10 per cent of the programmed space. 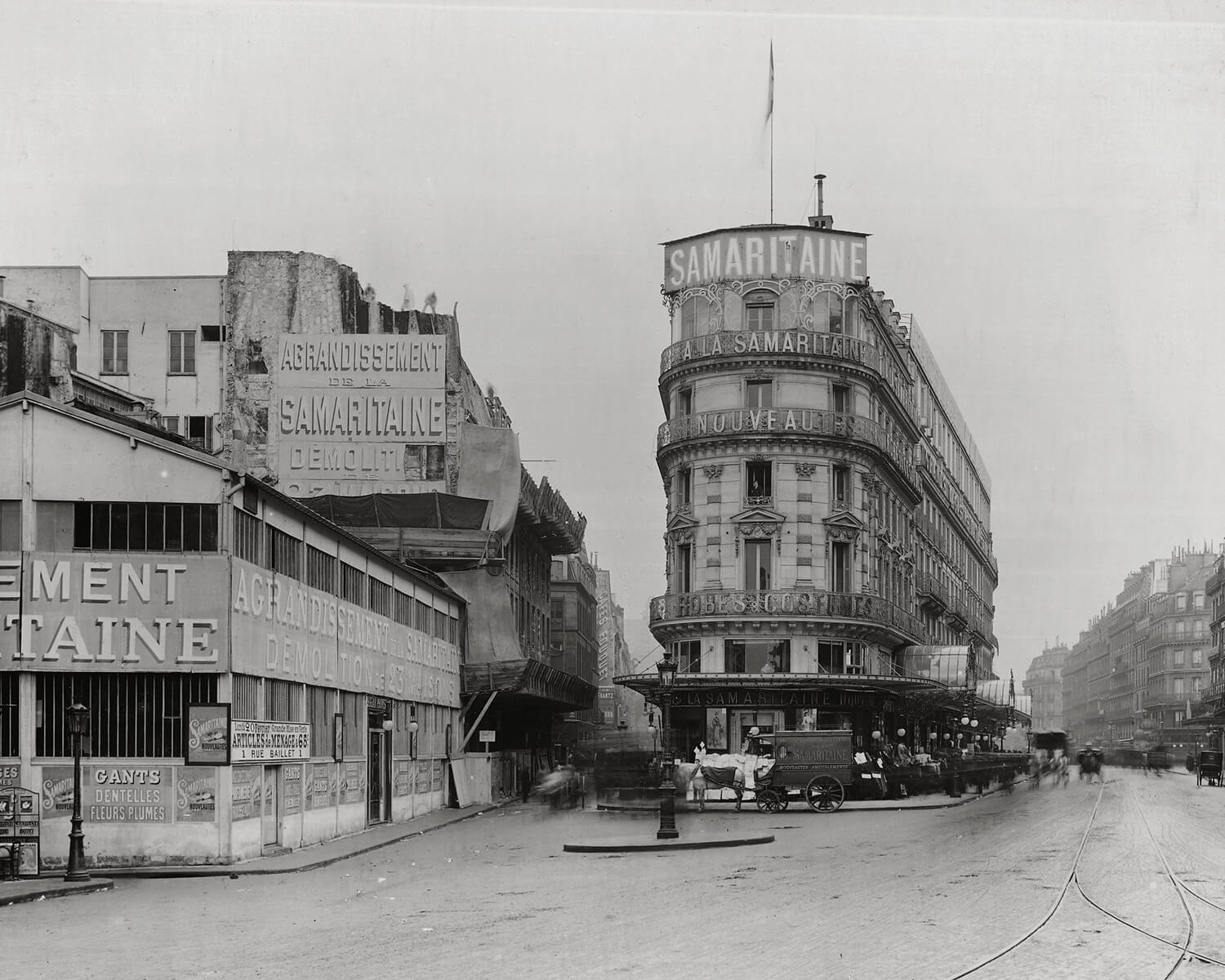 The complex itself also carries a rich architectural history. In 1890, architect Frantz Jourdain was commissioned to design a striking Art Nouveau-style structure — now known as the Samaritaine’s Pont Neuf building — using an innovative steel structure. The store expanded once again in 1928, with a tiered Art Deco addition designed by Henri Sauvage overlooking the Seine. The third structure on Rue de Rivoli is the most recent of the three. 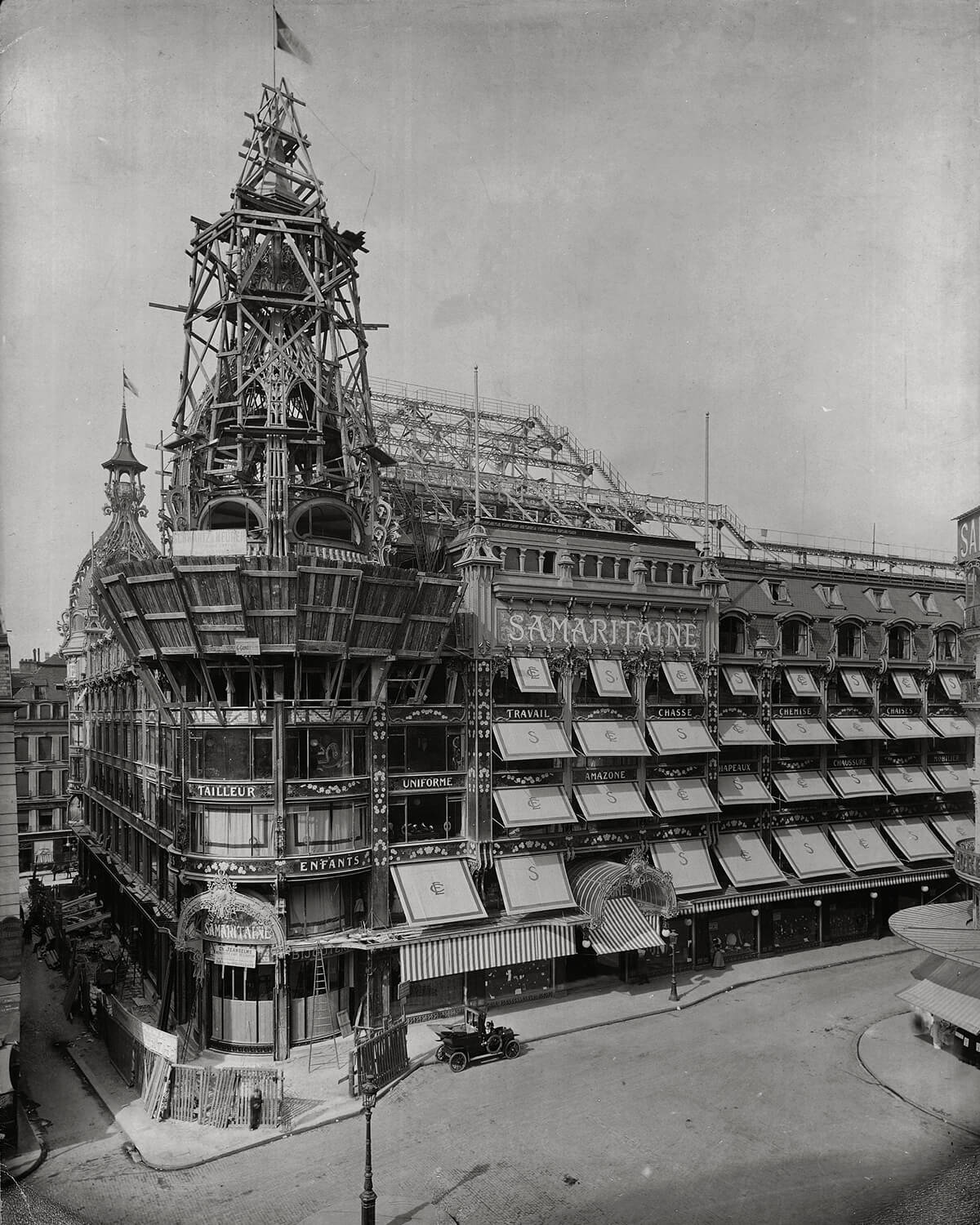 SANAA faced the challenge of harmonizing three separate facades, each with its own unique architectural style, while maintaining continuity with the neighbouring buildings. “Our intention is to re-establish a harmonious relationship between those parts that are renovated and those that are new,” the architects explain. The answer: an undulating glass façade facing Rue de Rivoli. The architectural move is decidedly contemporary, but subtly reflects back the visual rhythm of its surrounding context. The design choice is characteristic of SANAA’s work, which shows an affinity for transparency and layering of space, not unlike the building’s original design. 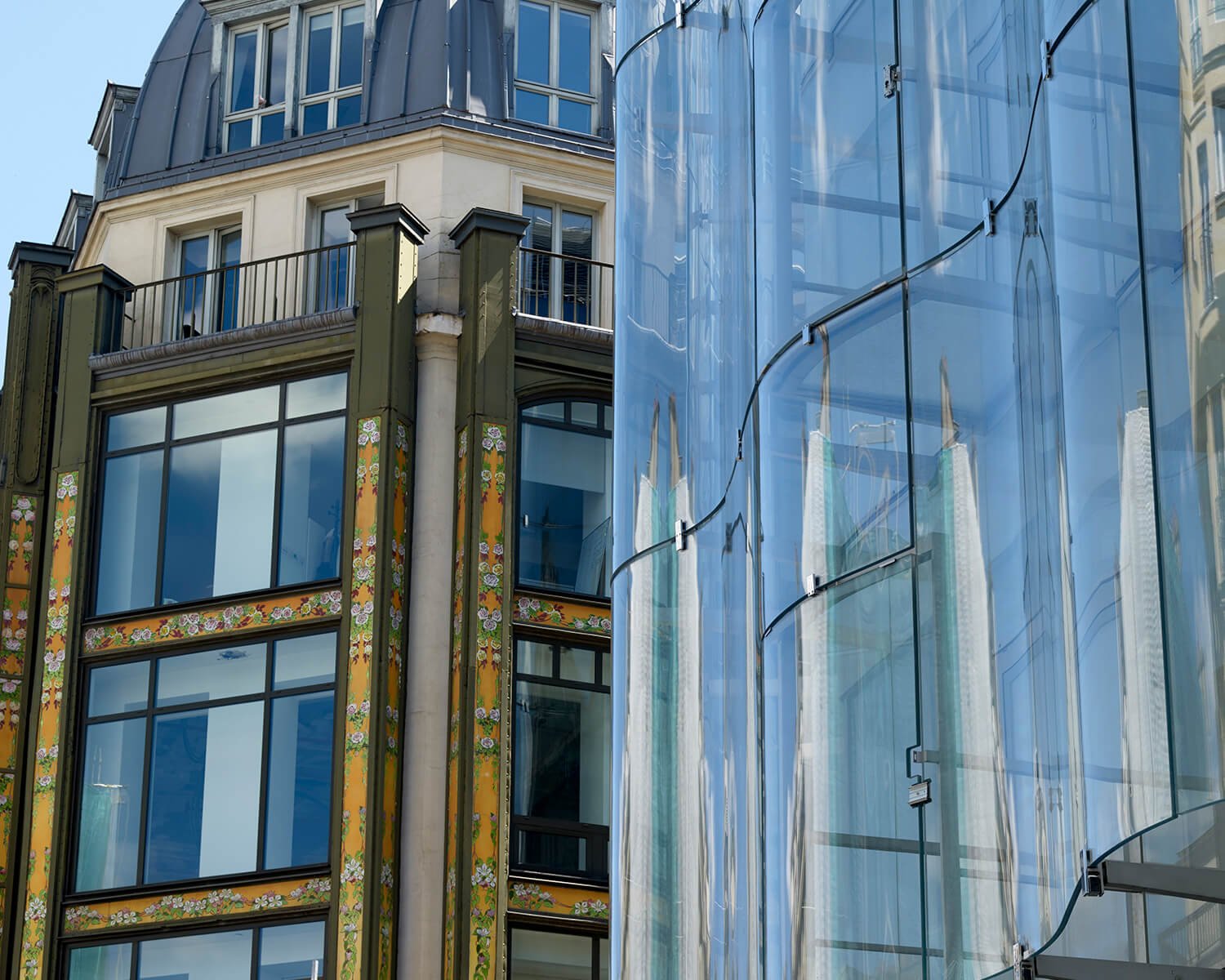 While the eye-catching façade stands out against the more traditional adjacent buildings, the restoration of the historical features was also a major priority, helmed by conservation specialists Lagneau Architectes in close consultation with the Ministry of Culture. “It was not a question of restoring the building to its original form, but simply of preserving and enhancing what the past decades had brought down to us,” says Lagneau. The original facades have been restored, but maintain their original designs as of 1932. 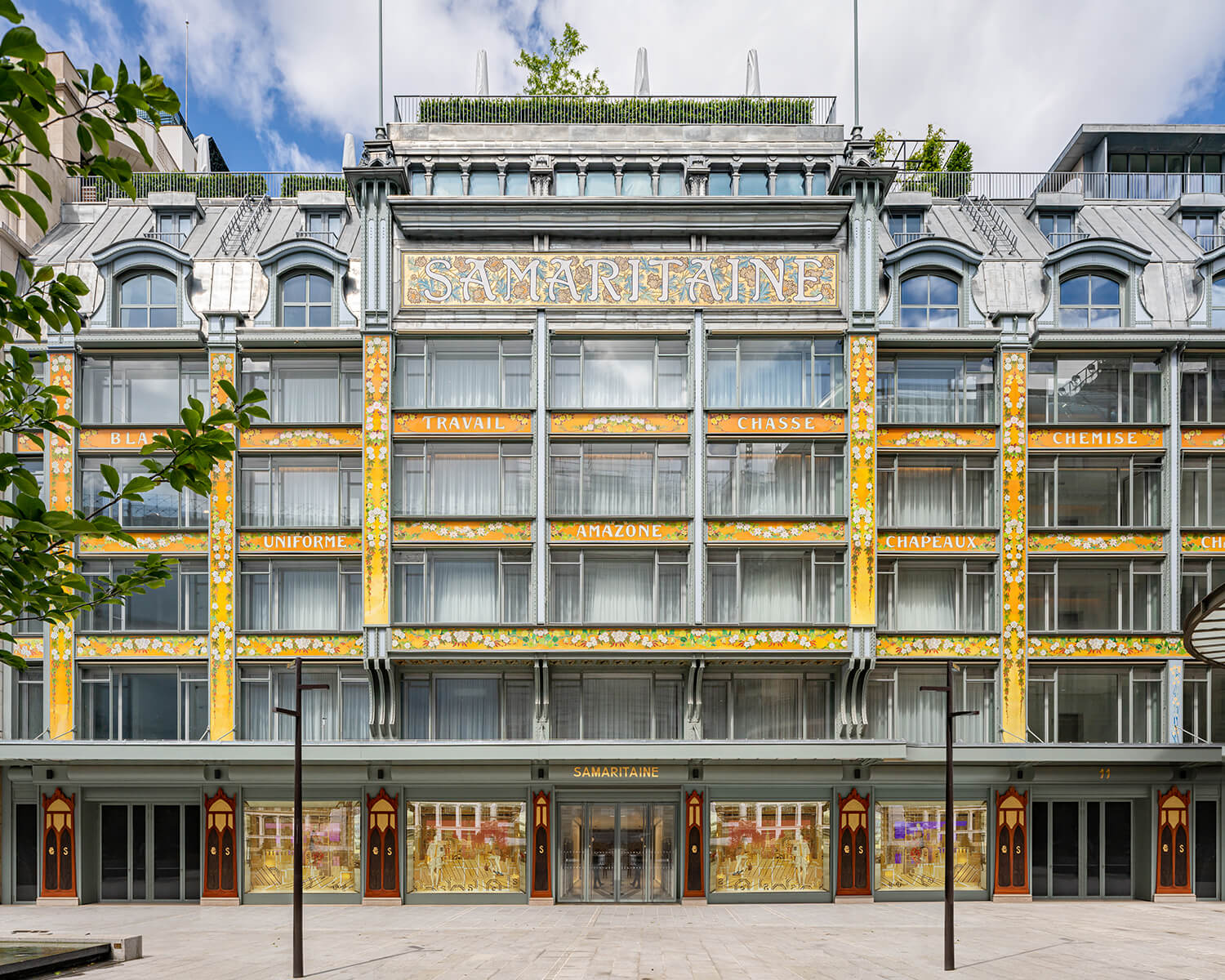 Jourdain’s Pont Neuf outpost was constructed during the early adoption of structural ironwork, and was ornamented with artificial stone. The iconic glass roof and Eiffel structure has been restored to its original shape and colour, but now uses electrochromic glass which tints according to brightness. Just below, the Art Nouveau peacock fresco has regained its former vibrant yellow hues thanks to the Bouvier workshop, injecting the space with fervent energy. 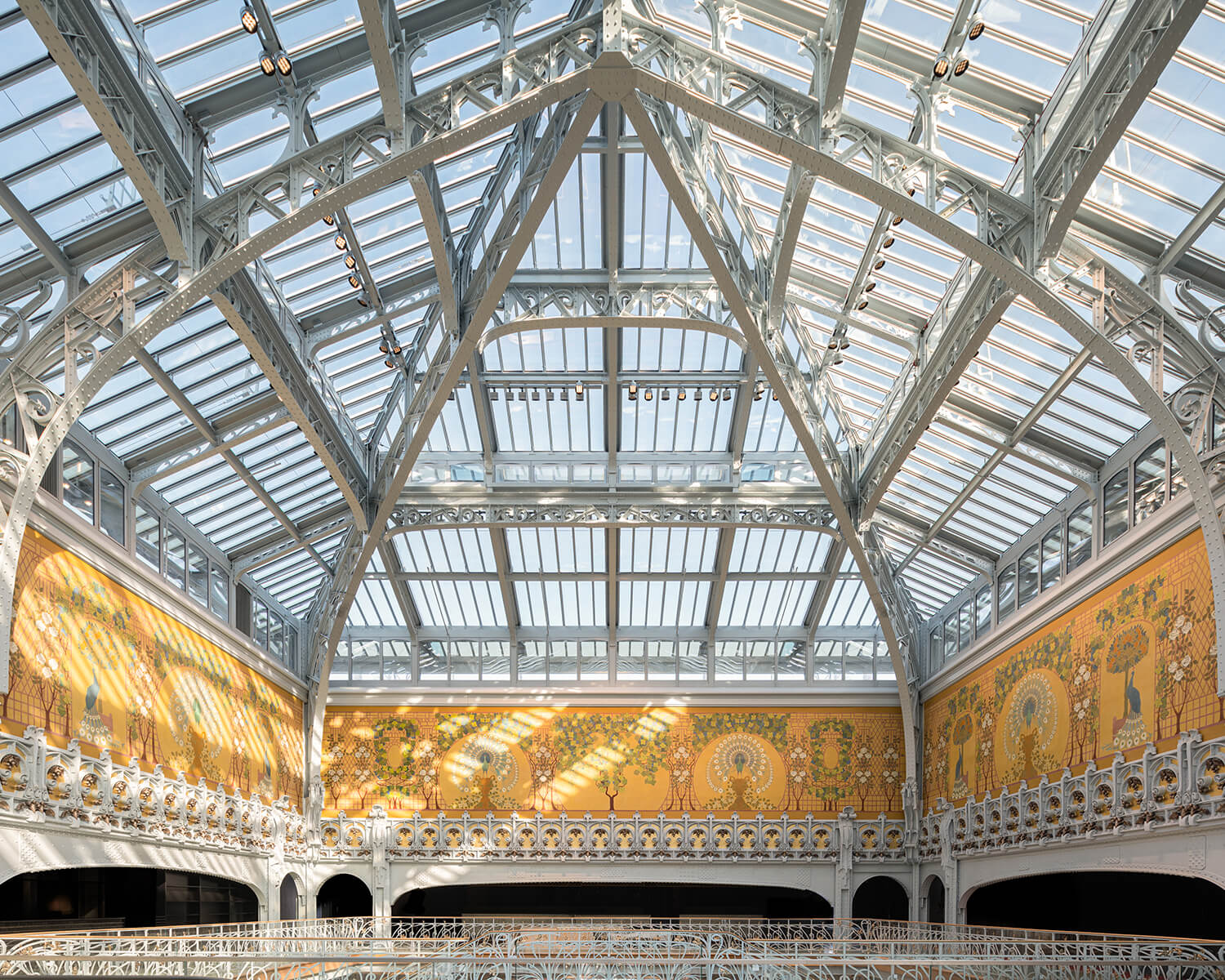 The true pièce de résistance is the building’s grand staircase. The railings, replete with 16,000 gold leaves, have been meticulously restored, along with the 270 original oak steps and ceramic ceilings. In addition to the existing elements found on site, the architects also took the opportunity to recover features that had been removed over the years, such as the wooden grilles from the original glass canopy. To add to the challenge, undocumented heritage elements discovered throughout the renovation had to be incorporated into the design plans in real-time. 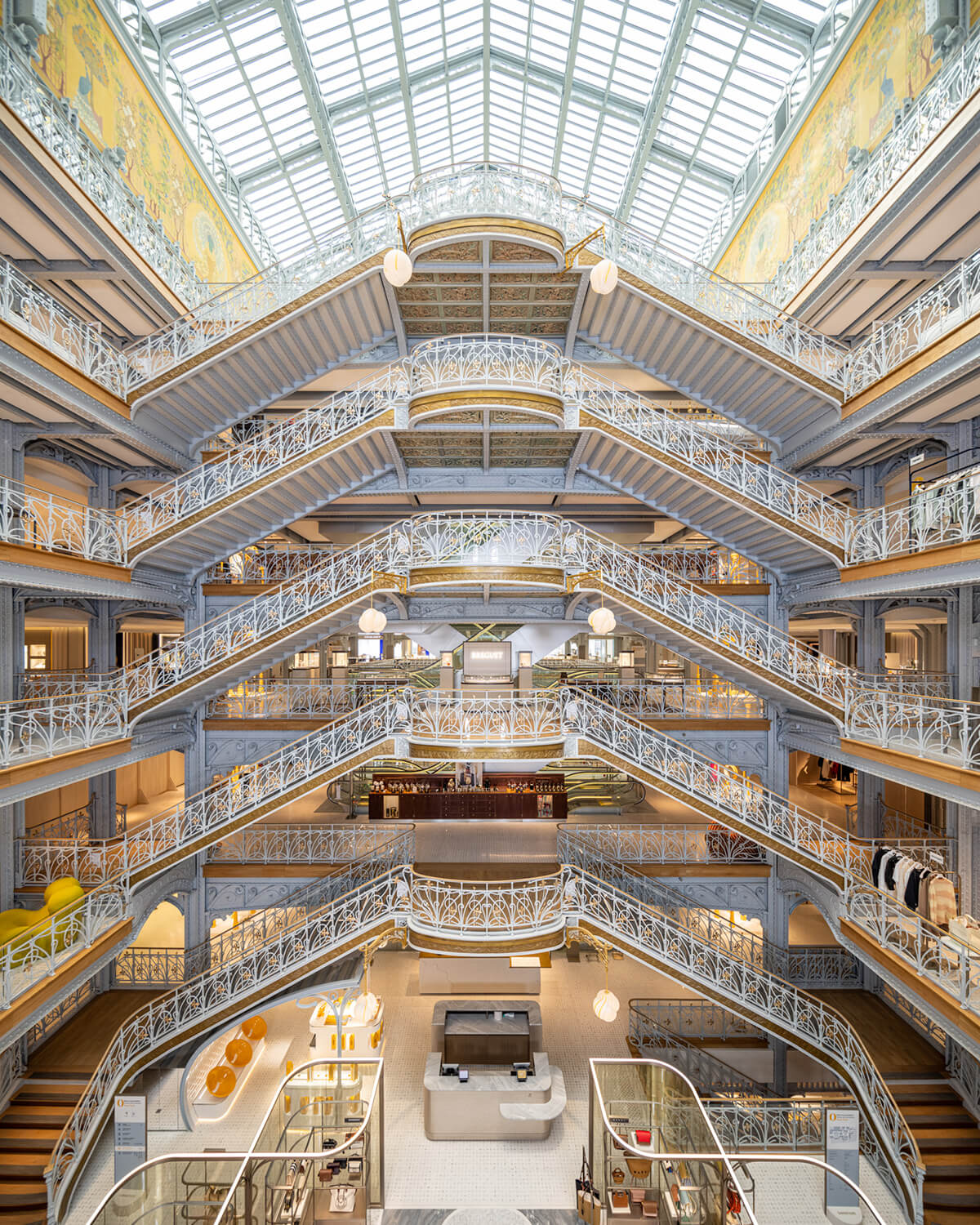 Terrazzo, ironwork and ornamental details take centre stage in the Pont Neuf building. The interior, designed by Toronto and New York-based firm Yabu Pushelberg, honours these traditional sensibilities with custom designed-furniture and rugs in grey-blue tones with bronze accents, in keeping with the building’s original décor. 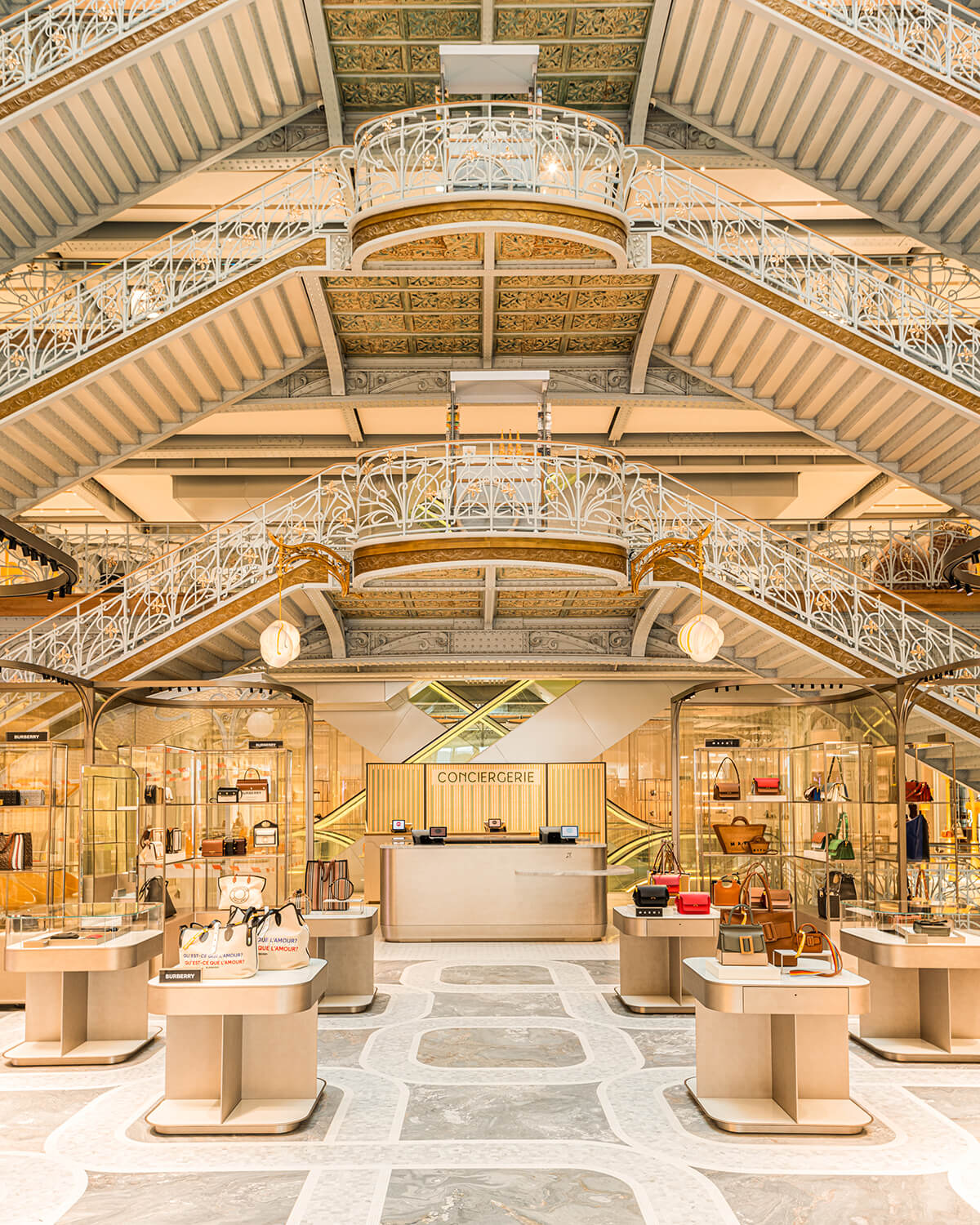 The interior of the Pont Neuf store was designed by Canadian firm Yabu Pushelberg. PHOTO: WeAreContents

Glass floors allow light to filter down from the roof all the way to the basement level, which houses the largest beauty department in Europe. Designed by Hubert de Malherbe, the basement features parquet, custom floor mosaics and gilded brass to complement the heritage design elements.

The Rivoli building, however, is imbued with a more modern, quasi-industrial quality. Designed by Cigue to appeal to the millennial market, the building is far more conceptual than its traditional counterpart next door. Conceived as a “store within a store,” the space offers limited edition pieces and customization workshops against a backdrop of rough walls and exposed hardware. 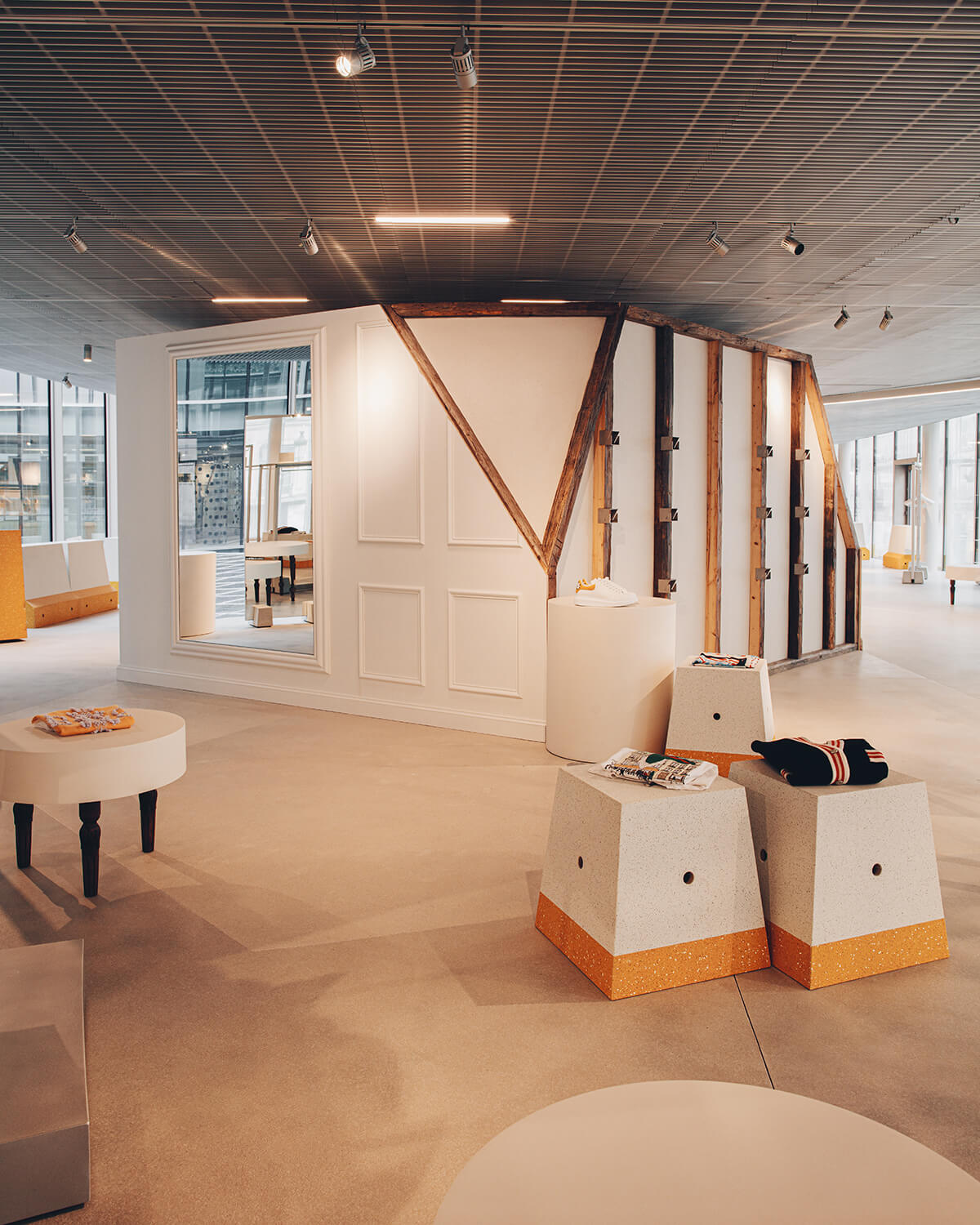 La Samaritaine was designed as part of a wider urban transformation that prioritizes pedestrians and the street life. The building parallels this strategy with a promenade that runs the length of the complex from Rue de Rivoli to Quai du Louvre. 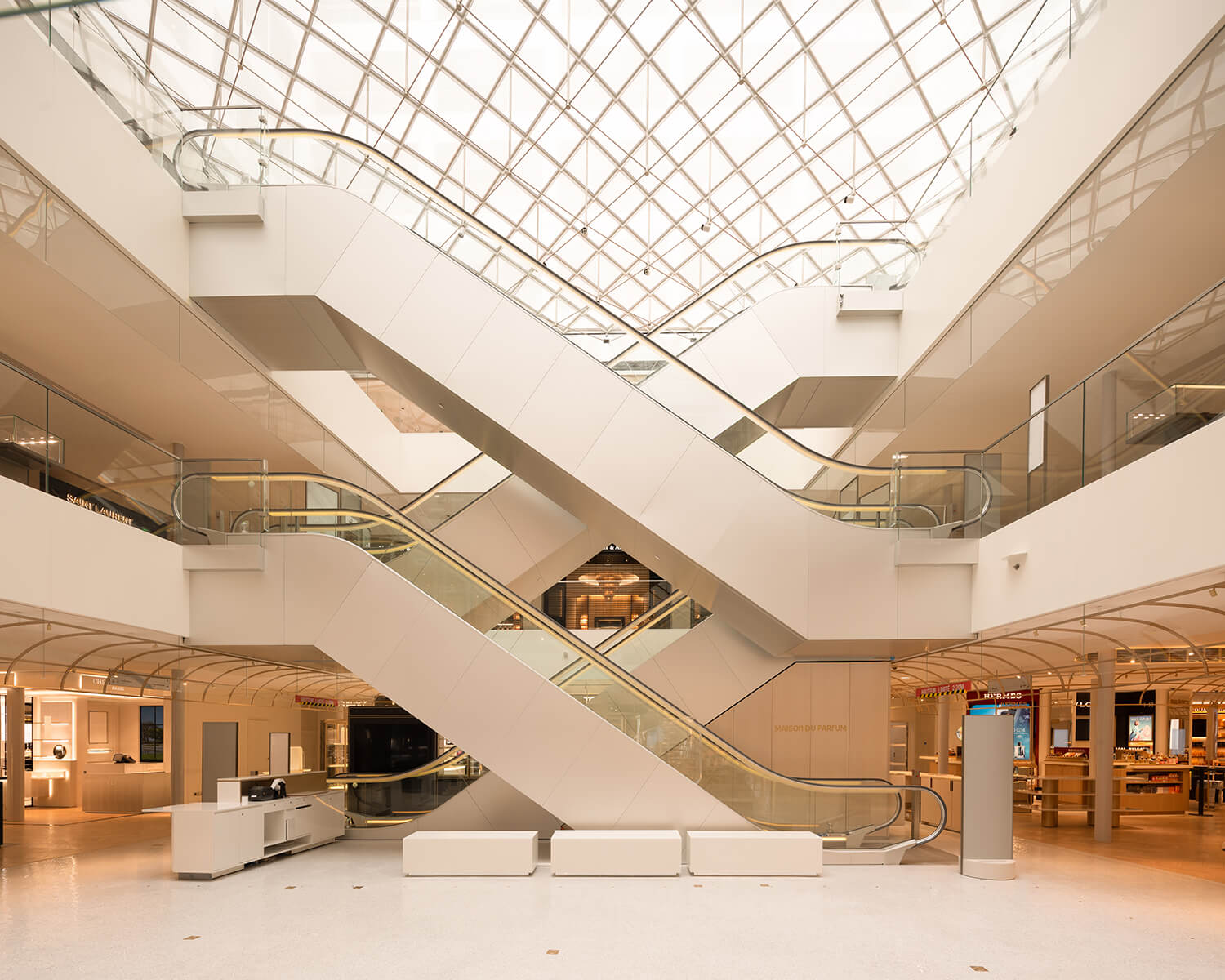 Linking three full height courtyards and commercial programs, the interior “street” acts as an extension of public space, with trees and patios integrated into the design, and the glass ceiling mimicking the open sky. The complex is also outfitted with ten restaurants, diversely designed to suit any taste. 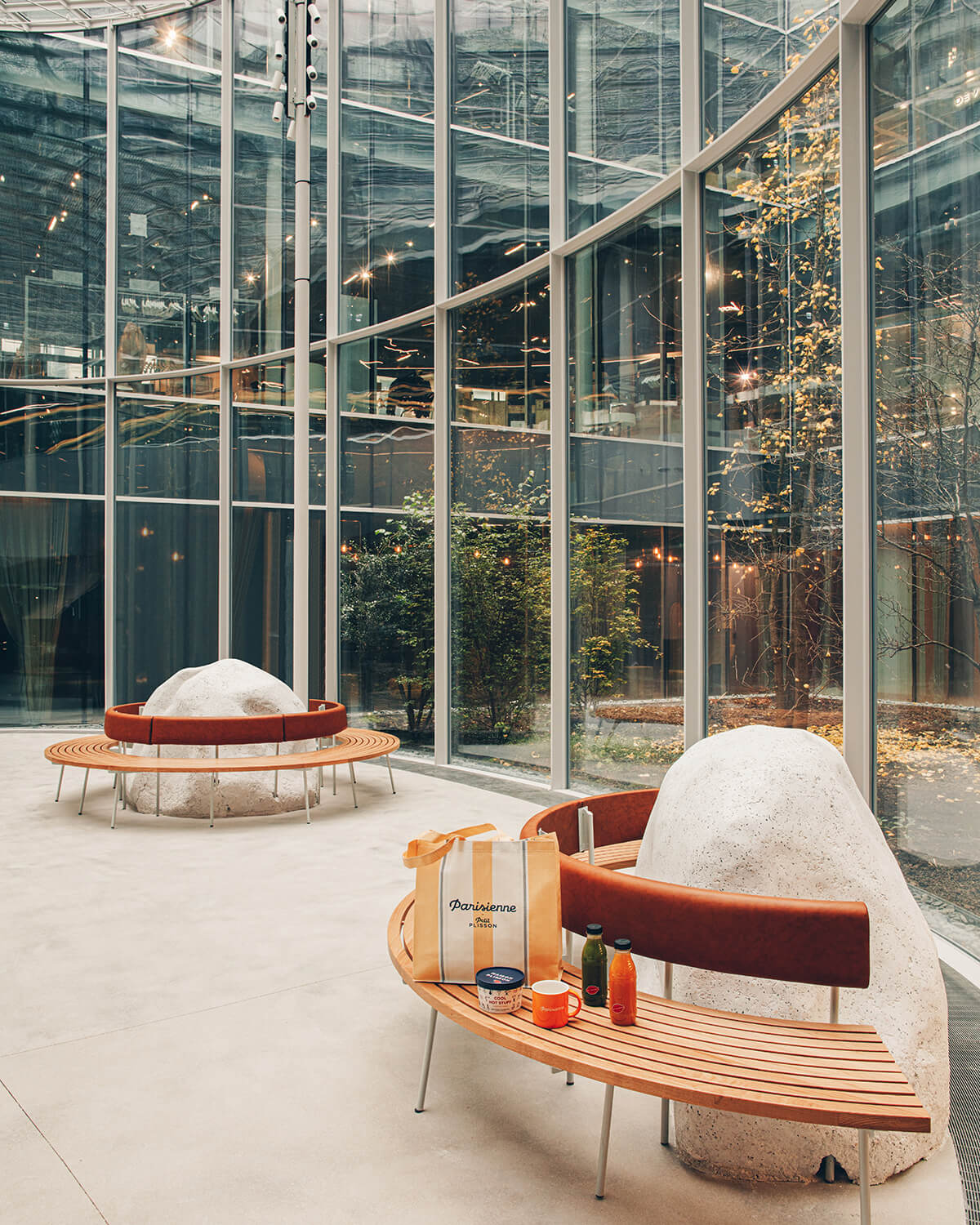 Though La Samaritaine clearly embraces its past, the store’s motto — “In Continual Progress” — is evident in the customer experience. From walking tours that showcase the building’s history and exhibitions in the store’s personal shopping “apartments,” to a luxurious day spa, the complex is a destination for more than just shopping. And, in collaboration with Polaroid, expert photographers have marked the best locations and angles throughout the store, amplifying La Samaritaine’s experiential — and Instagrammable — quality for locals and visitors alike. 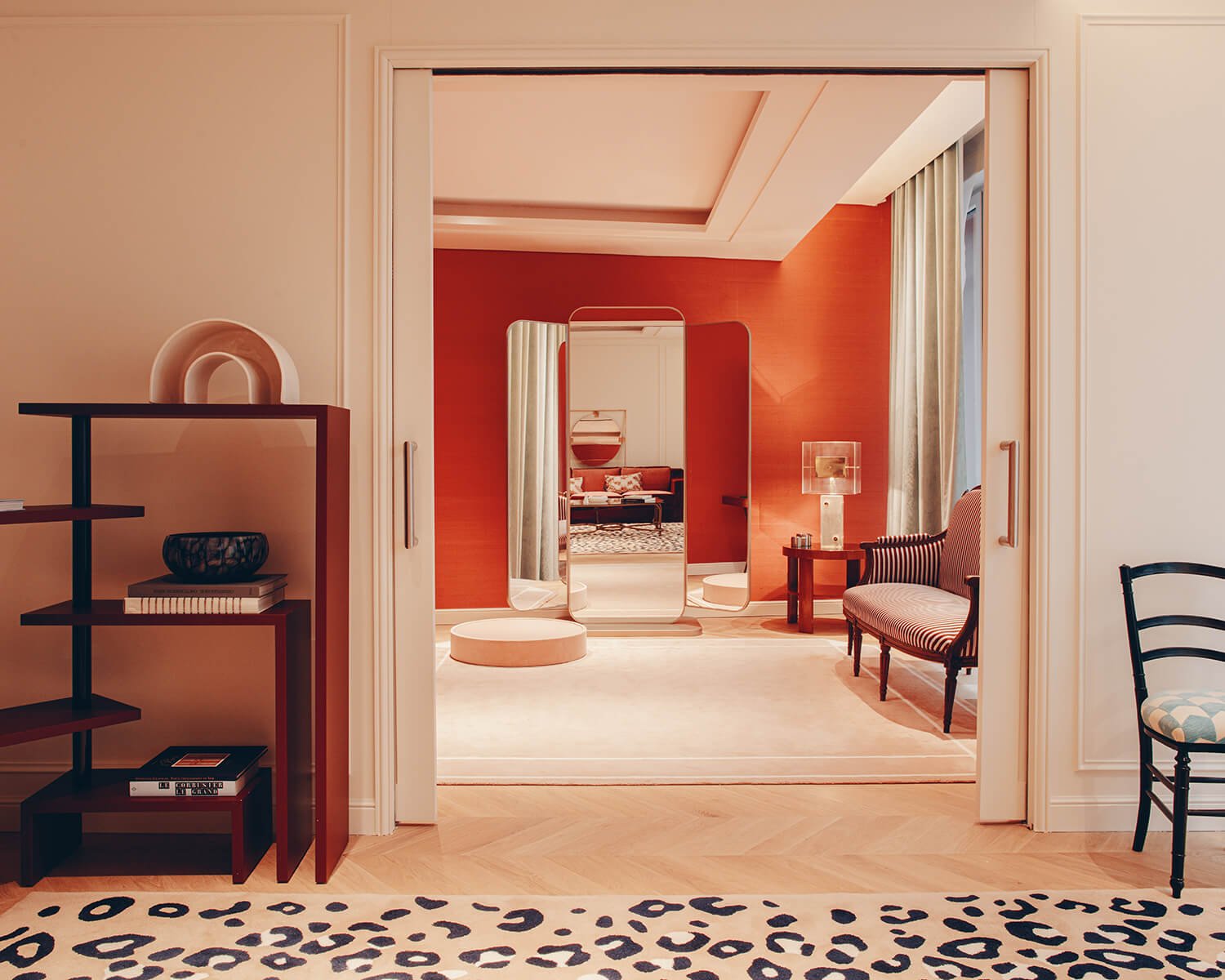