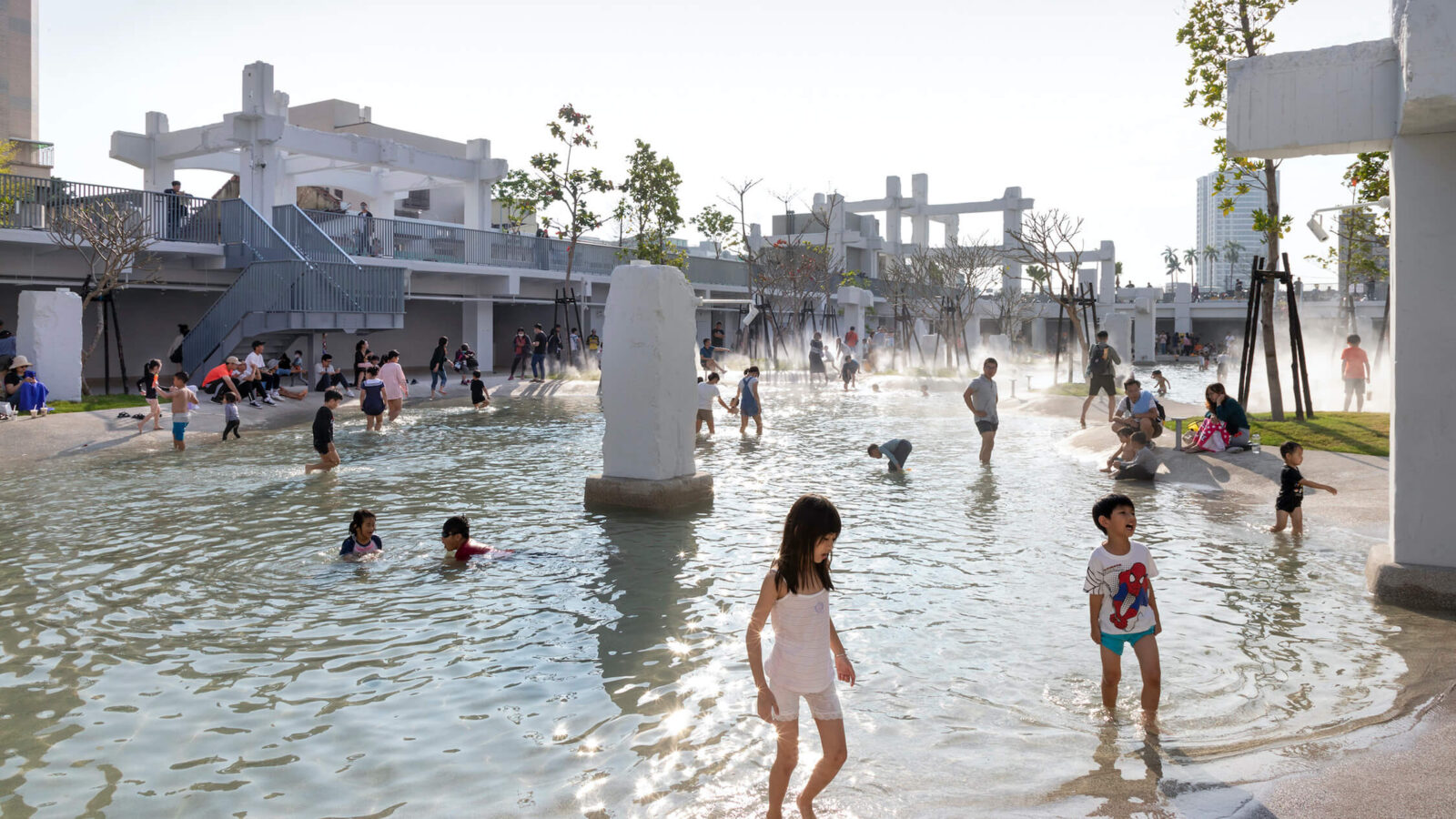 In Taiwan, MVRDV Transforms a Shopping Mall into an Urban Lagoon

The playful adaptive reuse project carves out a welcoming natural space from an underground parking garage.

Tainan is a city on the water. This hub of Taiwanese trading and fishing since the 17th century thrived thanks to a vibrant coastline of lagoons that gave the maritime metropolis its social and economic heartbeat. In the 1980s, however, a new wave of urban developments altered Tainan’s waterfront. The trend was forcefully epitomized by the ChinaTown Mall, a concrete bunker built atop a historic harbour. Fortunately, the course is reversing again. The defunct shopping mall has been re-imagined as Tainan Spring – a surprising urban lagoon – by Dutch architects MVRDV.

Playfully expanding the possibilities of adaptive reuse, the innovative scheme harnesses the concrete structure – and embodied carbon – of the former mall’s underground parking lot to foster an entirely different kind of experience. The erstwhile garage is now a naturalized two-block public plaza situated just below the street. Framed by a pedestrian arcade that incorporates remnants of the shopping centre’s concrete skeleton, the outdoor room offers an intimate oasis in the urban core.

While the newly completed plaza quickly proved a popular destination, the designers note that “it will take another two to three years to be fully realized as the freshly planted beds gradually grow into the lush garden that was envisioned.”

A central pool weaves through the plaza, with the water flanked by small stretches of nascent greenery. The pool itself is interspersed with elevated isles rich in plant life – all native to Taiwan – to create an already verdant retreat. The smooth, organic curves of the pool are also a pleasant counterpoint to both the rectilinear block as well as the rigidly angular concrete elements above. 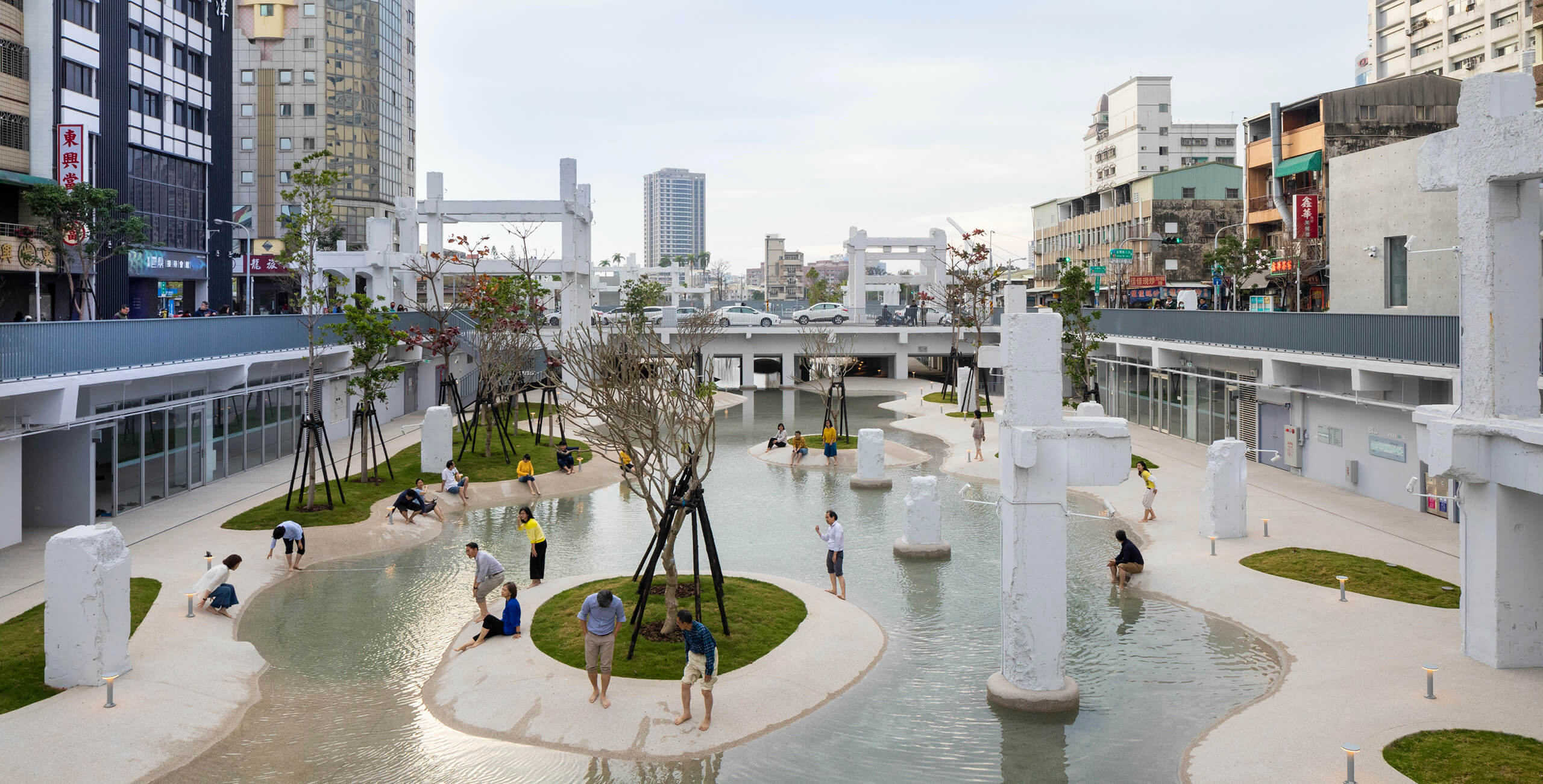 According to MVRDV, the water level will rise and fall in response to Taiwan’s rainy and dry seasons. In the hotter months, “mist sprayers will reduce the local temperature to provide welcome relief to visitors, reducing the use of air conditioning in the summer months,” the firm notes. Even the darker space below the road that bisects Tainan Spring is a welcome reprieve from the heat.

MVRDV Has a Meme-Worthy WOW Moment in Munich
At the heart of a former industrial area, the mixed-use Werk12 is clad in comic book phrases.
Read More

By turns a playground, a wading pool, a gathering spot, and an informal event venue, the tranquil plaza is a deceptively dynamic public space. As the place develops, the follies of the mall’s deconstructed frame can eventually “be converted to shops, kiosks, and other amenities,” says MVRDV. But even now, Tainan Spring is a park like no other.

The playful adaptive reuse project carves out a welcoming natural space from an underground parking garage.