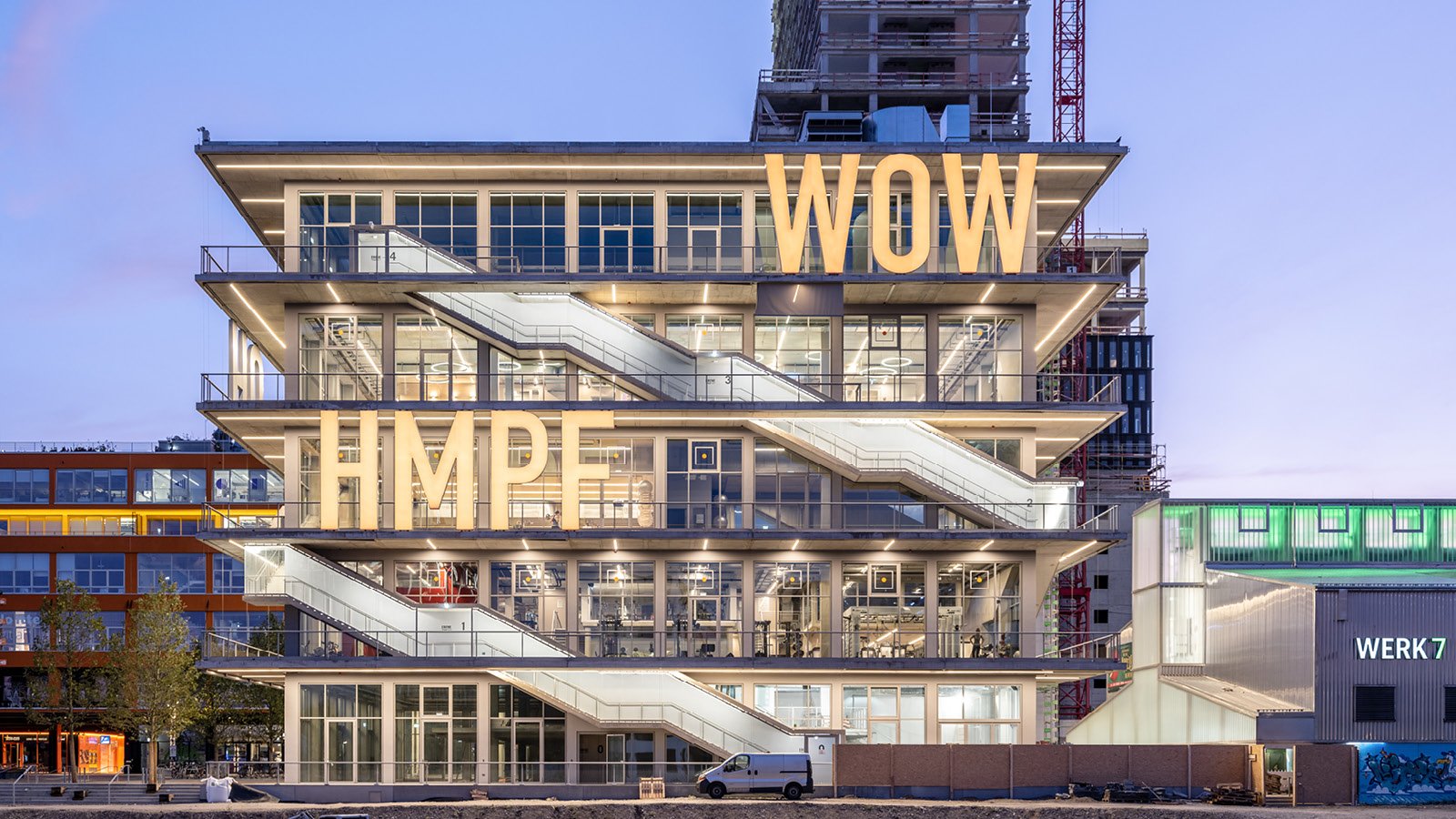 MVRDV Has a Meme-Worthy WOW Moment in Munich

At the heart of a former industrial area, the mixed-use Werk12 is clad in comic book phrases.

With a façade emblazoned with story-height words like “WOW,” “AAHH” and “OH,” award-winning Dutch studio MVRDV’s new mixed-used Werk12 in Munich is a meme in waiting. Borrowing these expressions from German editions of Donald Duck comics, local artists Christian Engelmaa and Beate Engl patterned the new five-story structure in the Werksviertel-Mitte district with illuminated 5-metre-tall quips.

At the heart of the former industrial area turned entertainment hub, the new 7,700-square-metre building plays host to a number of hospitality and retail programs as well as office spaces. “The area,” says founding partner and project lead Jacob van Rijs, “has already undergone such interesting changes, transforming from a potato factory to a legendary entertainment district. With our design, we wanted to respect and celebrate that history, while also creating a foundation for the next chapter.”

Restaurants and bars fill the ground floor while a three-story gym cuts through the core; devoting an entire floor to a swimming pool with perforated letters reading “W AT ER” (in case you momentarily forget where you are). Audi Business Innovations crown the complex by taking the top floor as their new work environment. In addition, the sprawling 5.5 metre ceiling heights within allow present and future tenants to adjust their space as needed – even adding additional mezzanines if required.

Wide terraces wrap the perimeter of each floor, interconnected with glass-enclosed staircases that link the levels together while giving the building its industrial edge (especially when illuminated after dusk).

Functioning as the primary point of circulation, the generous terraces move visitors around – rather than within – the building, further animating a dynamic façade. Finished in the same material as the nearby public walkways, the outdoor spaces are deftly integrated with their surroundings. For a building designed to stand out, there’s also an elegant sense of connection to the city.

“WERK12 is stylish and cool on one hand,” van Rijs adds, “but on the other it doesn’t take itself so seriously – it’s not afraid to say ‘PUH’ to passers-by!” It’s also not afraid to poke gentle fun at its users: the perimeter circulation forces towel-clad swimmers to navigate around the nearby “AHHH,” unintentionally striking a pose for those below.

In similarly sardonic fashion, the lit phrases “HMPF” and “PUH” face empty lots on either side of the building, as if preemptively shading their future neighbours – 1,500 residential units, a new concert hall, and more are in the works. Werk12 is a structure anticipating the joke to come; a meme waiting to be shared. With the architectural set-up in place, I’m looking forward to the punch-line.

At the heart of a former industrial area, the mixed-use Werk12 is clad in comic book phrases.