Now in his eighties, the legendary architect is as vital and quixotic as ever, taking pride in the fact that none of his projects comes close to bearing an obvious stamp.

Meeting Renzo Piano in his studio in Paris almost inevitably means walking past the Centre Pompidou, the High-Tech icon he designed with Richard Rogers decades ago. Inaugurated in 1977, it still looks as audacious today as it did back then. Some of it is covered in scaffolding, so I ask Piano, when I meet him a short time later, if he has consulted on any restoration or renovation work. “Of course,” he smiles. “They come here and we talk about it. Or I call up Richard to discuss it. I walk past it every time I go home. I am like the Quasimodo of the building.”

In the years since the Pompidou, Renzo Piano Building Workshop (RPBW) has designed everything from a stadium in the Italian port city of Bari to an airport in Japan, plus countless museums and cultural buildings along the way. Piano’s architecture is delicate yet daring, beautifully crafted yet inventive. Aged 82 but showing little sign of slowing down, the Pritzker Prize winner still divides his time between offices in Paris, New York and Genoa and is currently working with his 150-strong team on dozens of projects across the globe. These include a visitor experience centre for the CERN particle physics laboratory in Switzerland, a pediatric hospital in Uganda, the Academy Museum of Motion Pictures in Los Angeles and, located just steps from Viljo Revell’s renowned City Hall in Toronto, the practice’s first project in Canada: a courthouse co-executed with the global design firm NORR. For Piano, such projects represent the raison d’être of architecture. “When you make a public building,” he says, “you feel like you are doing something special, something important for the community.”

Your father was a builder. What did he think when you told him you wanted to be an architect?

My father was a small residential builder with around 10 to 12 people working for him. I used to spend a lot of time on construction sites as a child. He would make me sit on a little hill of sand, because then I was always visible to him. When I told him I wanted to be an architect, he looked at me and said, “But why? You can be a builder.” For him a builder was someone who does a lot of the same things [as an architect]: design, calculations, engineering. But when you are 19 years old, the only thing you can think about is running away from home. It signifies freedom and rebellion, and rebellion is still the easiest way to find yourself at that age. I also knew that they only taught architecture in Florence, Milan and Turin; there were no architecture schools in my hometown of Genoa, so I decided to become an architect!

Living by the sea was a major influence in your life. How did it form you?

If you grow up by the sea and spend years walking by the sea and watching it, you become a member of that big family that is the Mediterranean family. You grow up with this idea that the sea makes things beautiful and interesting. And the Mediterranean is like a world; it’s like a device that has recorded every sort of thing for centuries: sounds, voices, perfumes, light. It is about a sense of light and of lightness.

Your competition entry with Richard Rogers was one of 681 for the Centre Pompidou in 1971. In an interview, Rogers mentioned that you never thought you would win. That must have been quite a freeing position to be in.

When you are that age — I was 33 and Richard was 37 — it’s not about winning or not winning. You just want to do something that expresses what you want to say. For us, culture wasn’t an intellectual club; it wasn’t museums. It was going to concerts with your children on your shoulders. It was about creating a sense of curiosity. We wanted to show that cultural buildings didn’t have to be intimidating. When we actually won, we met M. Pompidou and he told us he wanted a building that would last 500 years. We stared at him, because at that point we had never built anything that lasted longer than six months!

Piano was 33 when he and Richard Rogers won the commission to design the French capital’s Centre Pompidou, the landmark cultural facility not far from RPBW’s Paris office today. PHOTO: Michel Denancé

What was the main idea behind the building’s design?

We wanted total flexibility. For us, flexibility was a kind of ethical position. It was not technical. When you feel culture is something difficult to define, something that can change, you have to make a building that is a bit like a soft machine that can adapt to different needs. That flexibility was a promise of happiness, of change. We had this idea that architecture should change the world; it was a kind of utopian idea.

Do you still think architecture can change the world?

In the best-case scenario, architecture is about putting into a building the spirit of the time. It doesn’t change the world, but it bears witness to change. Projects happen because the time is right for them. Don’t forget that this was the end of the sixties, beginning of the seventies. There had been the May ’68 student protests in Paris. In Italy, I finished my studies during the period of the university occupations. London had the Beatles. It was a special moment. It was inevitable that something like the Pompidou Centre got to happen.

The Whitney Museum of American Art’s former home in a beloved Marcel Breuer building was a tough act to follow, but a new facility designed by Piano in New York City’s Meatpacking District more than met expectations. PHOTOS: Nic Lehoux

People often say you don’t have a signature style. Why isn’t it essential for you to have one?

In the best-case scenario, architecture is about putting into a building the spirit of the time. It doesn’t change the world, but it bears witness to change.
Renzo Piano

I have always loved the fact that, in our profession, every time you do a new job, it’s a new story. It’s a bit like finding yourself on a new island with new materials and new people. There are so many things that change when you do a new project that you would have to be a bit stupid not to take the opportunity to change and renew yourself, too. There is a thread that runs through all my work, however. And it is something I like to call coherence. Coherence and, perhaps, integrity.

You have been active as an architect for 50 years. How would you say architecture has changed in that time?

When I started, nobody was putting the fragility of the Earth first. The new century has made a clear statement: The planet is fragile. And we need to be responsible; we need to be wise in the way we make buildings. This should not be seen as a negative obligation or an imposition that makes you suffer, but as a new source of inspiration.

You designed a new bridge pro bono after the Ponte Morandi in Genoa collapsed in a storm in 2018. Why was that important to you?

Because what happened is so, so sad. For me it’s a quadruple tragedy. There are the 43 people who lost their lives, the 600 people who were made homeless, the bridge that was lost and divided the city in two and, finally, another reason: one that belongs to the imaginary. A bridge connects people both physically and psychologically; it does an immensely important job. Building a bridge that collapses is terrible because bridges should never fall. 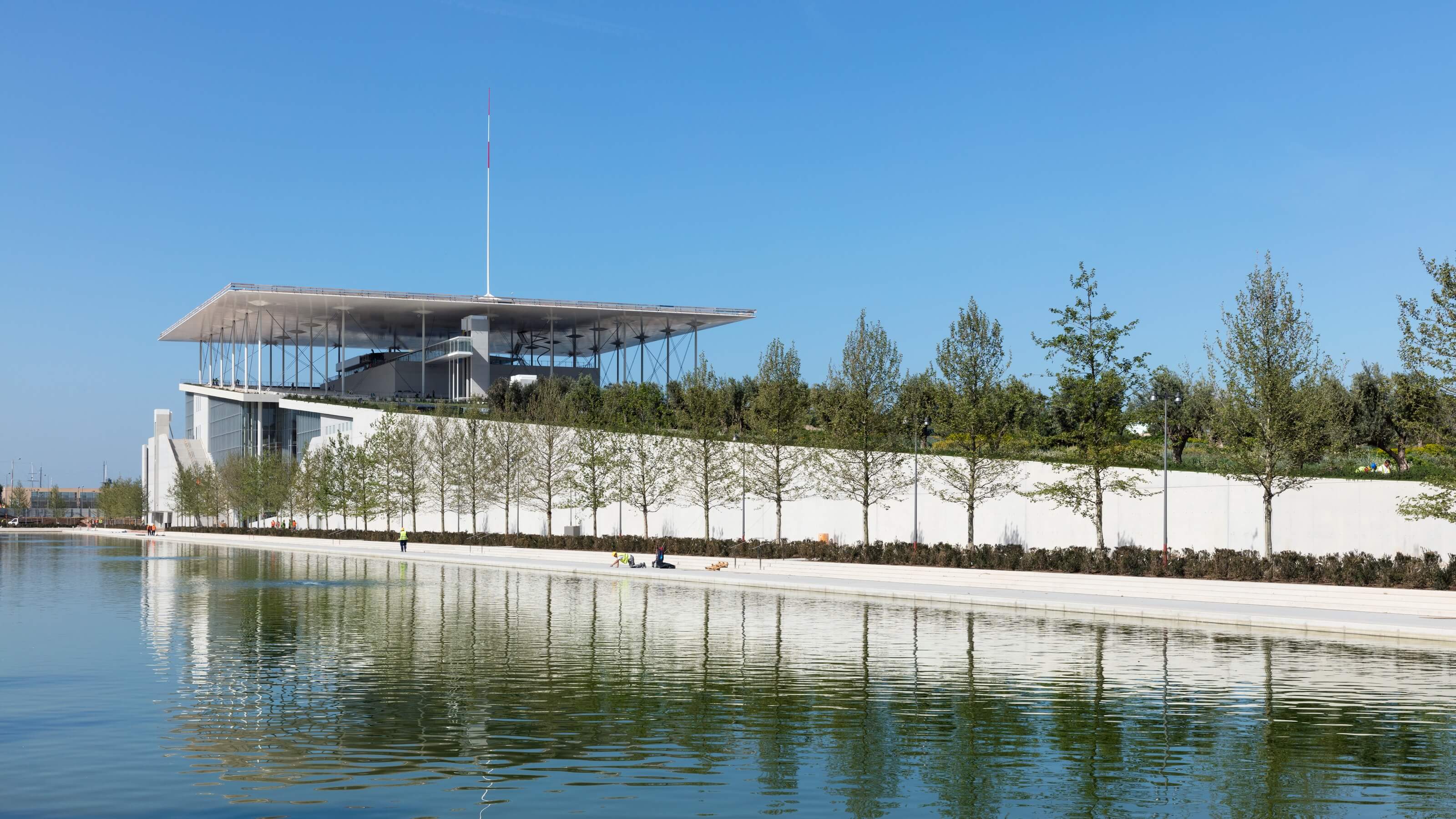 Opened in 2016, the Stavros Niarchos Foundation Cultural Center in Athens was designed by Renzo Piano Building Workshop to exacting environmental standards. Its mammoth canopy roof, for instance, is topped with 10,000 square metres of photovoltaic cells, enough to generate 1.5 megawatts of power for the library and opera house below. PHOTO: Michel Denancé

How is construction on the new bridge going?

Yesterday, they were putting up the first big 100-metre-long piece. I designed the bridge, as you say, but a bridge, like all projects, is a collective enterprise. There are 1,000 people working on it, including many excellent engineers. We are all very proud of it. First, because it is going to be built in one year, which is amazing. And second, because when you make a public building — a bridge, a library, a museum, a school, a university or a hospital — you feel like you are doing something special, something important for the community. Making something together for others is a gesture of peace.

A collaboration between RPBW and NORR, the new Toronto courthouse currently under construction kittycorner to Viljo Revell’s iconic City Hall will consolidate several Ontario court facilities in a single 17-storey edifice. Among its defining features is a 20-metre-tall atrium (top) enclosed by a transparent glazed facade intended to convey openness. IMAGES: Courtesy of RPBW; lower rendering by Pixelflakes

In the past, you have said that failures are as important as successes. Why do you think that?

It’s very simple: If you don’t run any risks, you will go nowhere. I don’t like to make mistakes, of course, but the problem is that, as an architect, you have to express change. How can you do that if you are following a path that has already been explored? My theory is that, as an architect, you should live at least 150 years. For the first 50 or 60, you would learn and make a lot of mistakes. Then, once you have learned, you would have another 50 or 60 years to actually make buildings. And then once you reach 120, you would have another 60 years to teach everyone else how to make buildings. I’m not joking.

Now in his eighties, the legendary architect is as vital and quixotic as ever, taking pride in the fact that none of his projects comes close to bearing an obvious stamp.