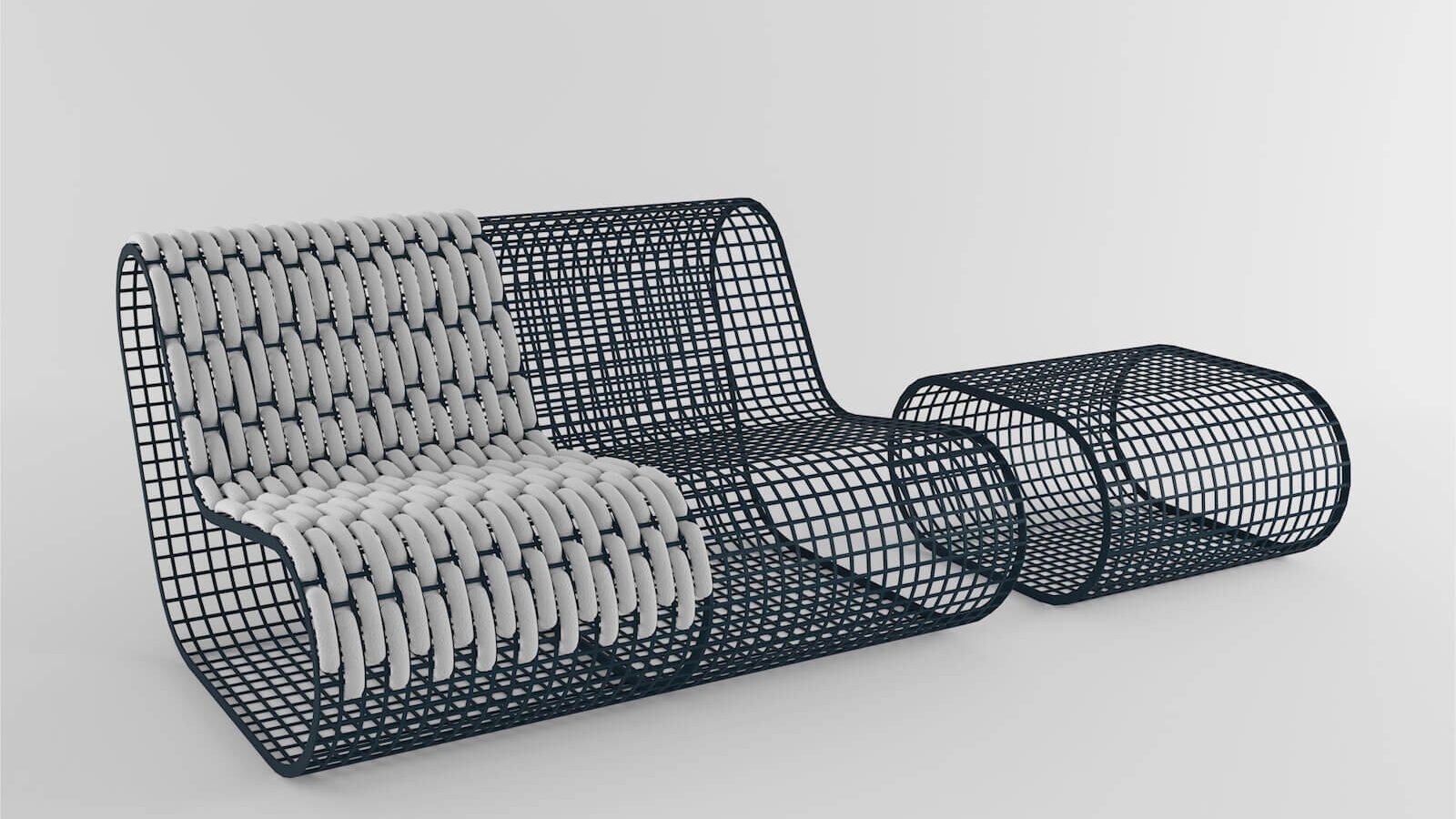 25 Design Launches from the Salone That Never Was

We talk to Poltrona Frau’s Nicola Coropulis about the future of Italian design – and select 25 pieces from brands that would have premiered during Milan Design Week.

It may have been cancelled, but the spirit of Salone del Mobile still looms large over this spring’s furniture launches. The top-tier companies, which typically install stands at the design fair and welcome visitors to their showrooms, began releasing collections in April, during what would have been Milan Design Week. And the product announcements keep coming.

Italian manufacturers are determinedly playing catch up. Shut down in the midst of the coronavirus, their factories were allowed to reopen in early May after a group of brands, including B&B Italia, Bisazza, Boffi, Flexform, Molteni Group and Poltrona Frau, lobbied the national government, citing the near-catastrophic state of contemporary design manufacturing. It’s an industry that has buoyed the country’s economy and cultural identity since the end of the Second World War. The group’s Design Manifesto noted that the furniture and design industry was “one of three strategic sectors of Italian production, [employing] over 130,000 people distributed between 20,000 active companies.” Even though the factories are once again up and running, they still face the challenge of reaching an audience in the absence of the Salone. But most have risen to the occasion by focusing on digital launches via Zoom or Instagram TV.

“We have learned how to do things differently,” Poltrona Frau CEO Nicola Coropulis recently told Azure. “We have better tools now. The digital part of the story will be kept — because it doesn’t subtract. It adds value to the physical presentation.” The struggle will be a long one. “The good thing is that the companies have reopened their factories,” he says. “But the whole world has to be up to speed to allow our reopened factories to work.”

Coropulis still believes that Salone, which attracts 300,000 visitors to the fairgrounds and events across the city each year, will return and be as relevant as ever. “Salone remains so important — it’s not only a furniture fair but a general event that involves the whole city. And next year, it will celebrate 60 years.”

In honour of what would have been Salone, here are our top picks from the virtual launches of Milan-showing companies. 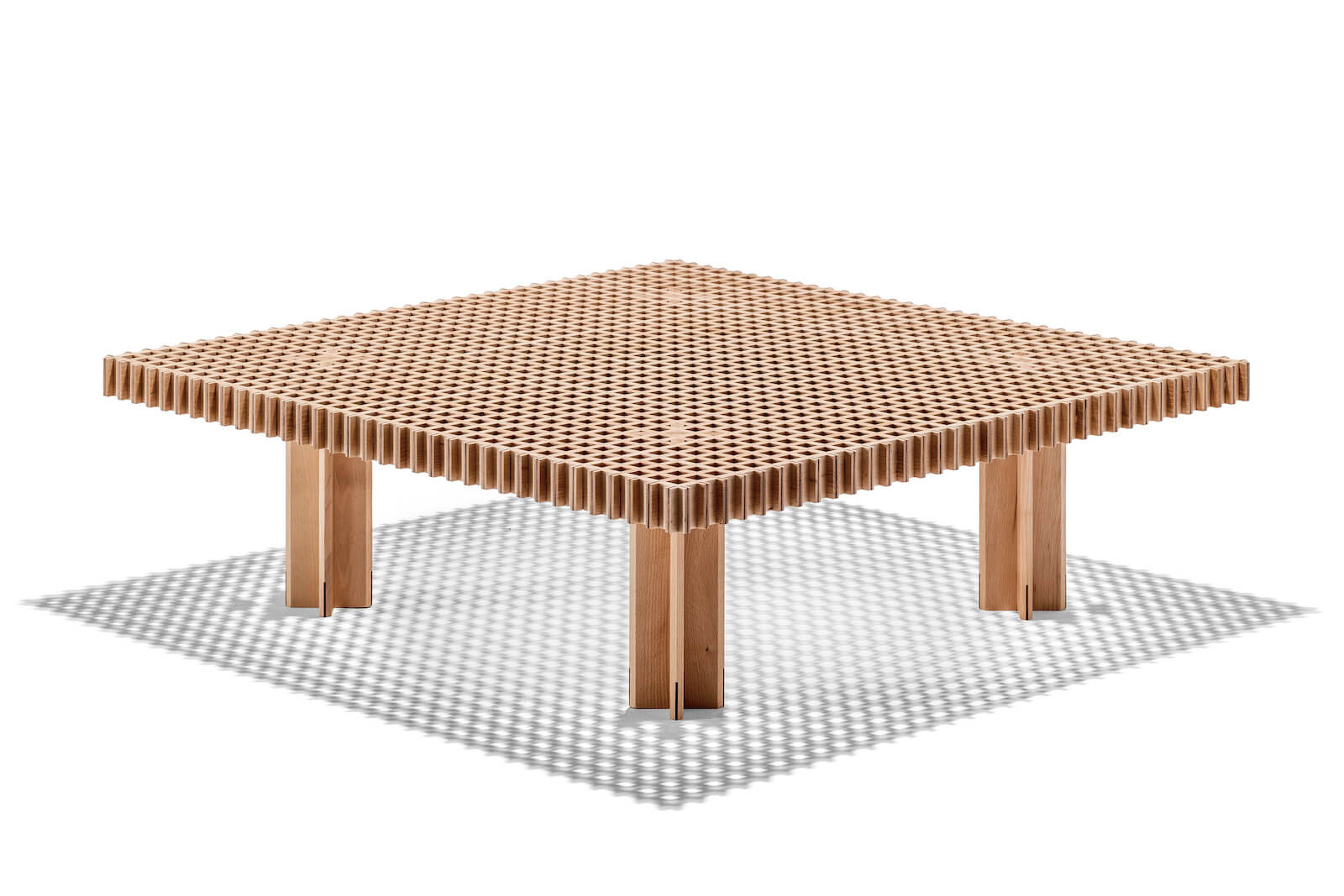 Poltrona Frau, which was established in 1912, is celebrating its past and present. In addition to fêting the 90th anniversary of its Vanity Fair armchair, the company has reissued Gianfranco Frattini’s Kyoto table, which looks as modern today as it did when it was first introduced in 1974. Made with wooden boards connected with 45-degree joints that form a square pattern, it comes in two sizes, both 32 centimetres high. 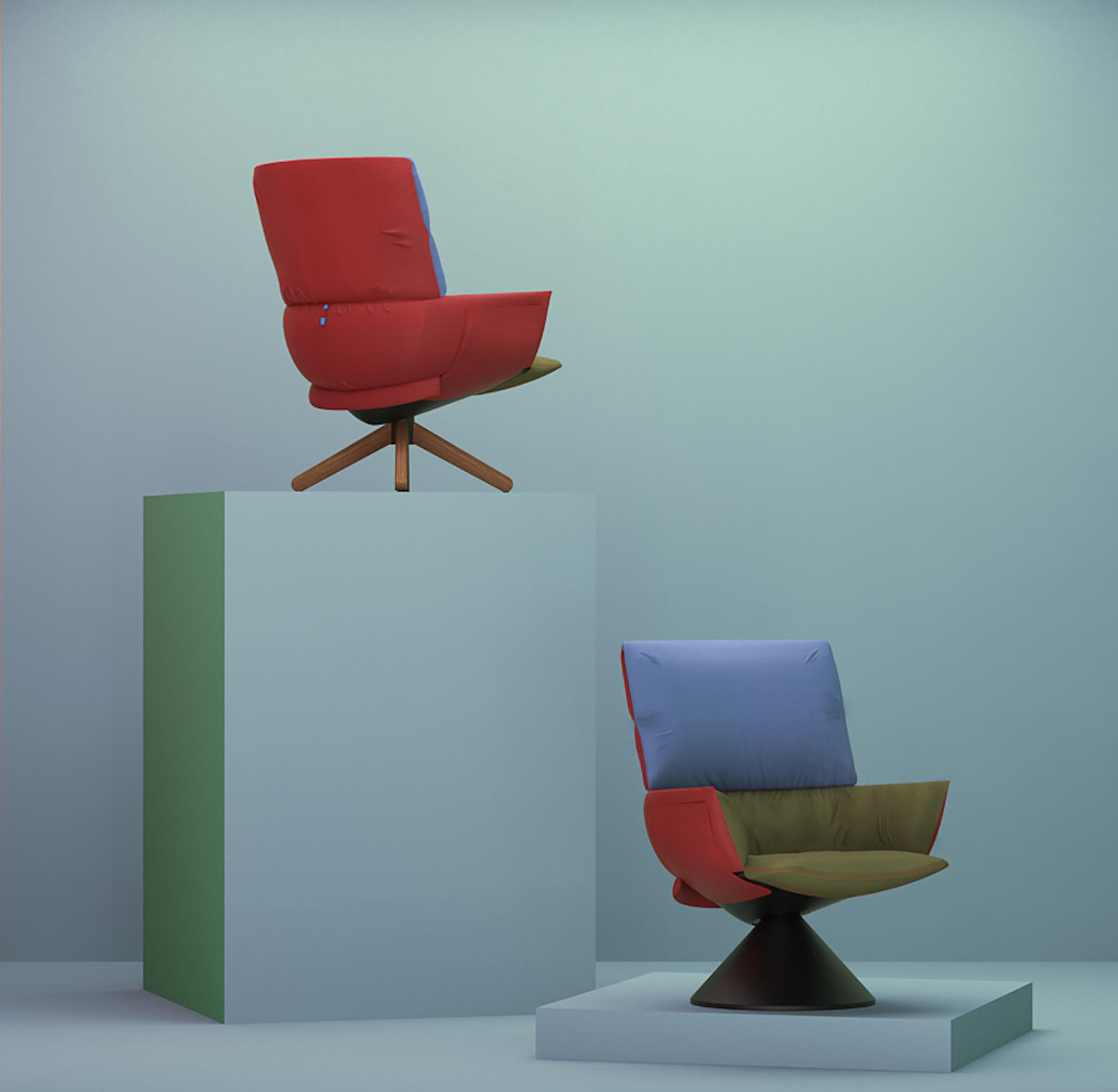 Patricial Urquiola might be the artistic director for Cassina, but she continues to collaborate with numerous other Italian companies – and this year added Cappellini to her roster. Her Lud’o lounge chair continues the Spanish-born designer’s penchant for looking to the world of fashion for inspiration. One can dress and re-dress the cushions on the chair shell (made of recycled plastic) with removable padded covers in fabric or leather options. 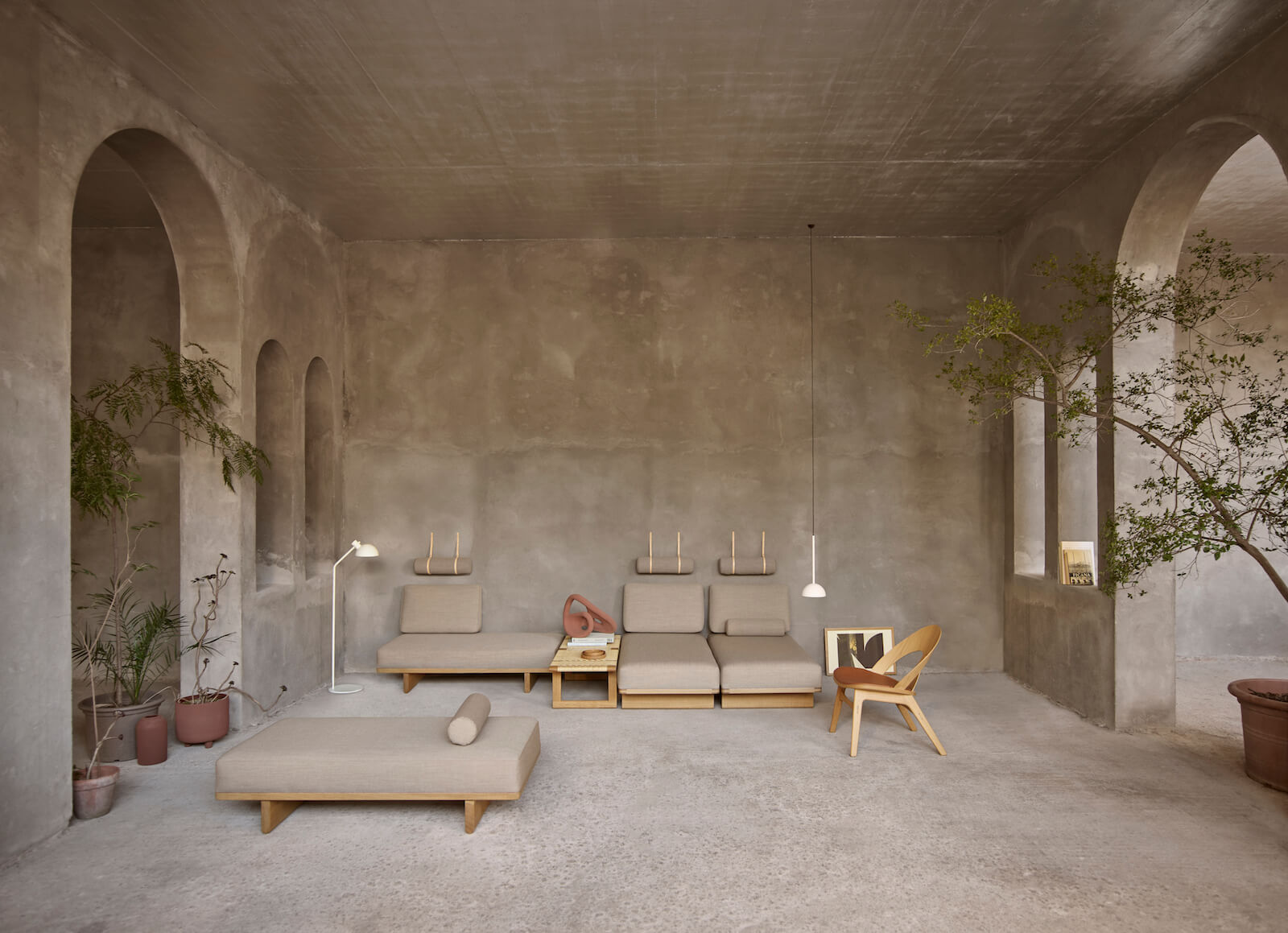 Another classic to get a reboot is Børge Mogensen’s daybed from the 1950s. The timeless design features cylindrical headrests and armrests, rectangular back pillows and a soft cushion atop a robust structure crafted from solid oak. 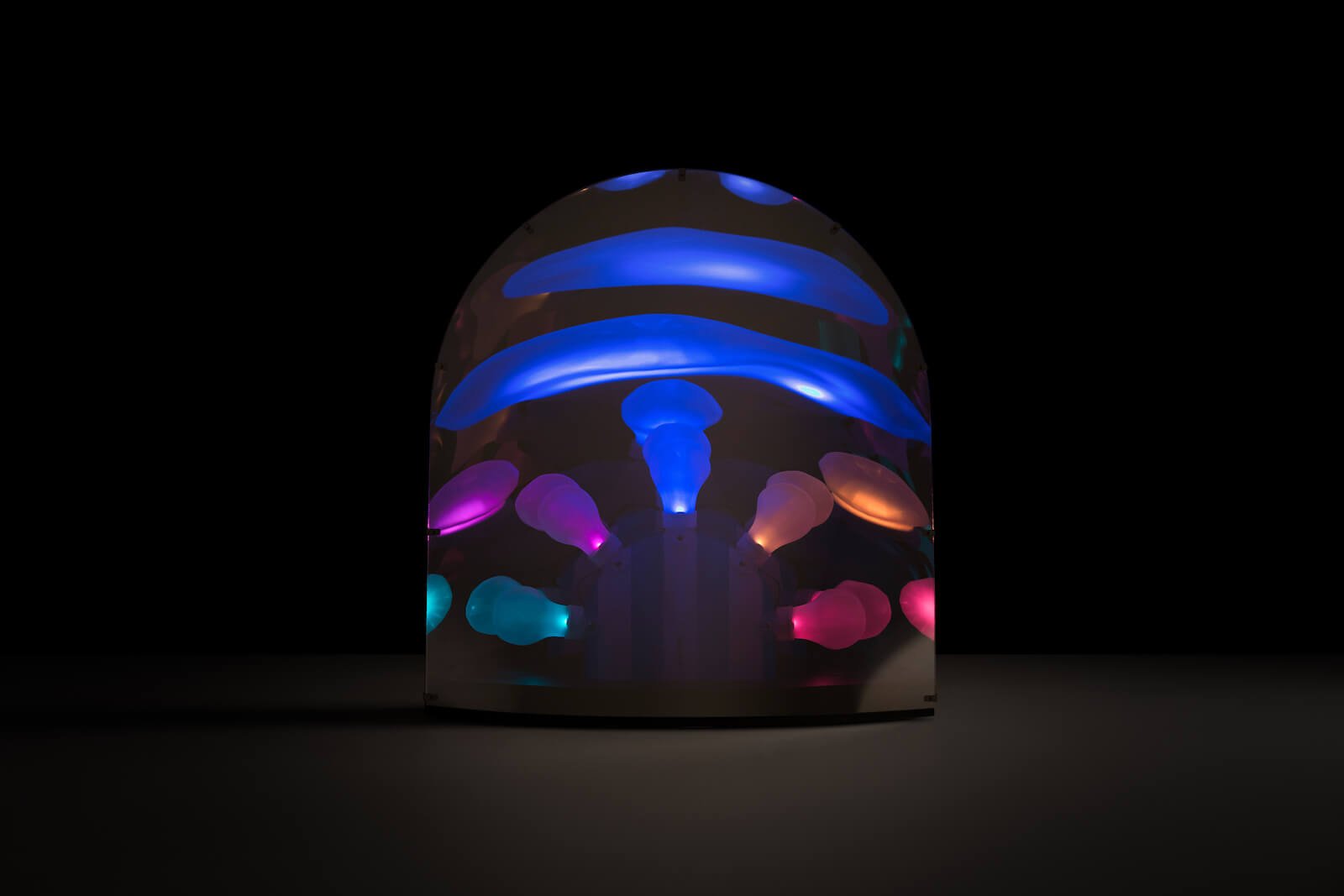 Kooky in a good way, Ward Wijnant’s debut design for Moooi is described by the Dutch brand as “a lighting design that keeps quiet during the day, whilst bringing the party to your interior at night” via its “dim-to-disco” switch.

5
Sail Out pouffe by Cassina 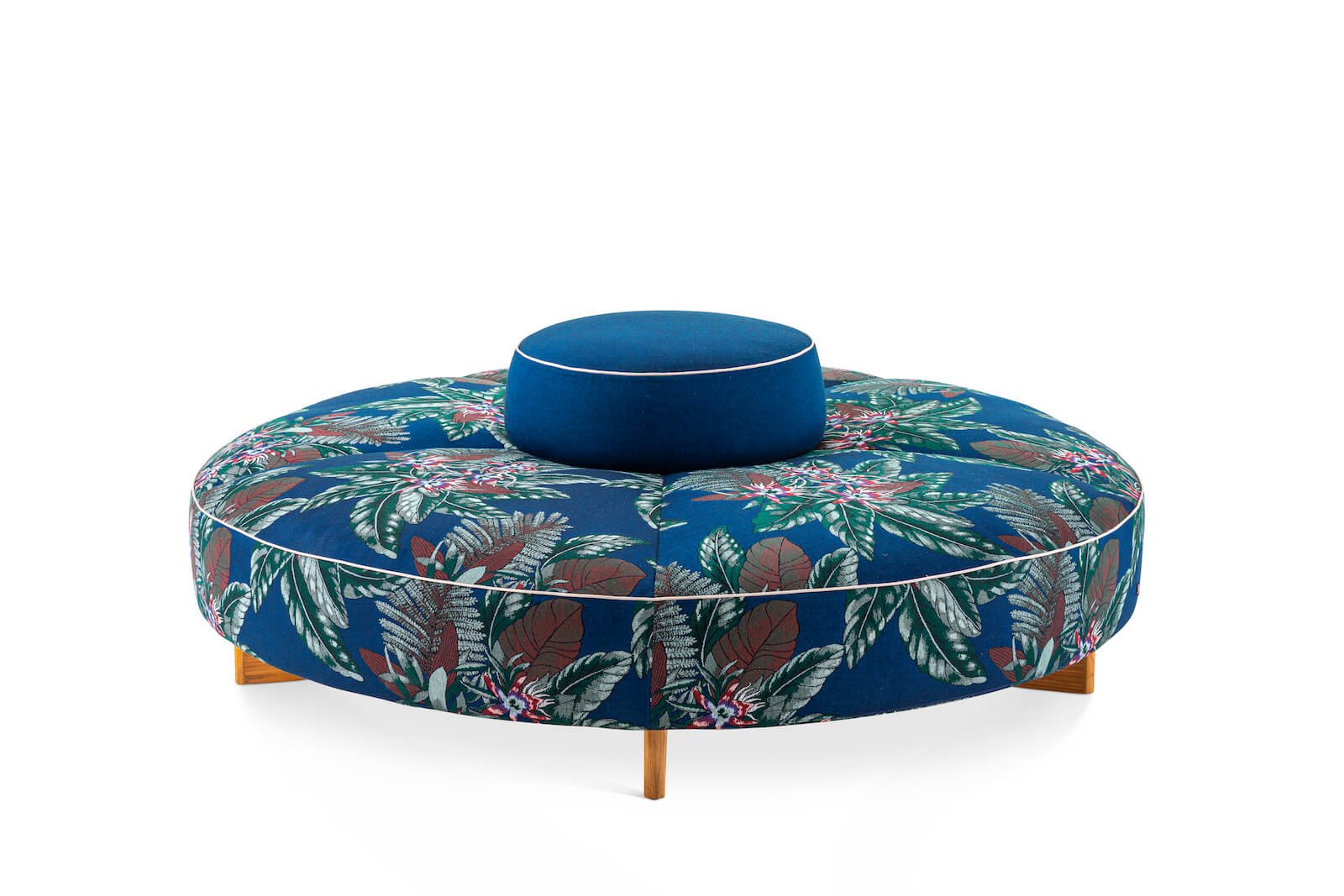 It’s difficult to single out just one piece from Cassina‘s inaugural outdoor collection, but Rodolfo Dordoni’s Sail Out pouffe exemplifies the joyfulness of the new offerings. Available in two sizes, the piece is made up of triangular segments that meet at the centre, where a hidden hole allows water to drain through. The cushion anchored to the middle can be used as an armrest or to support a tray. 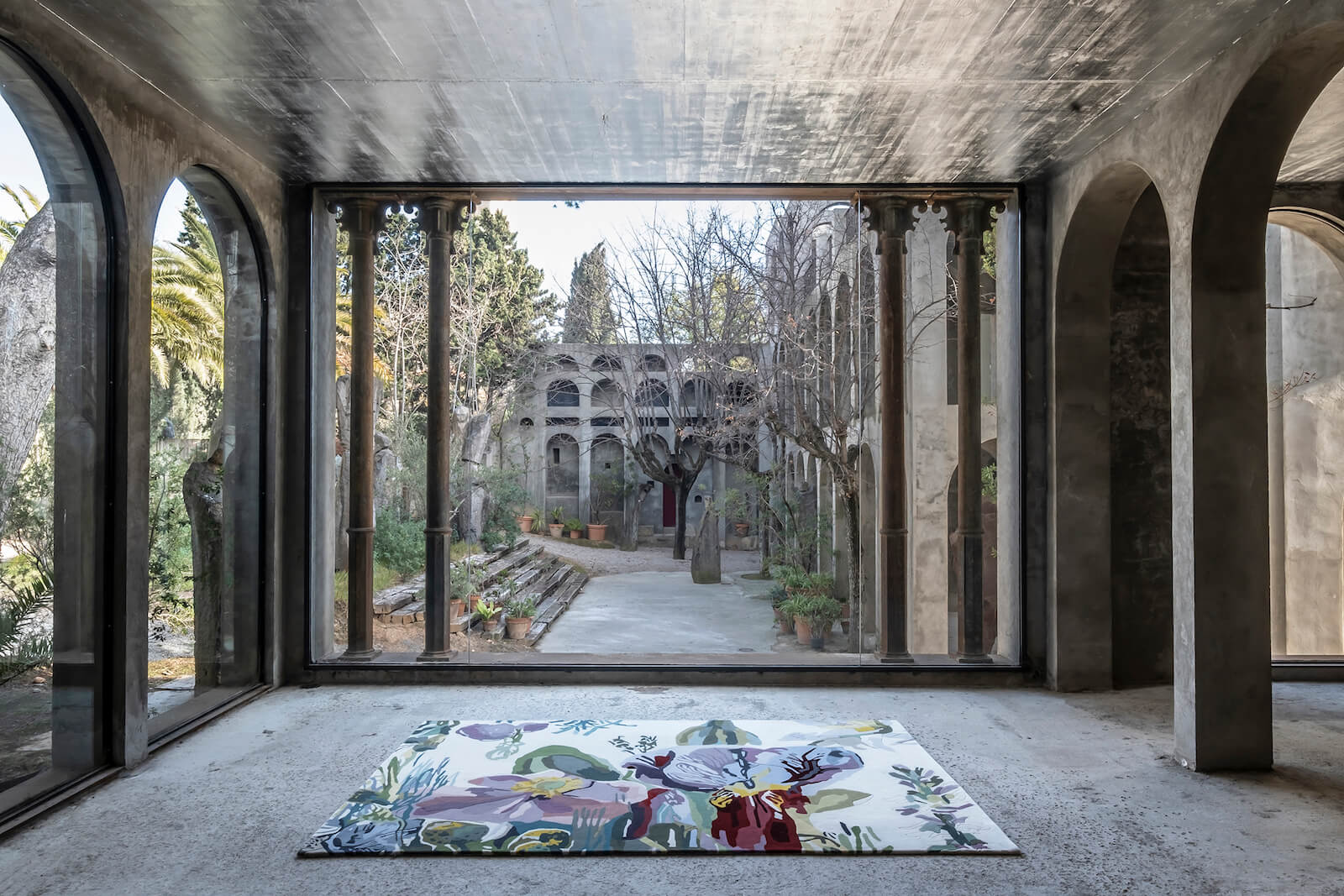 Designed by Barcelona artist Santi Moix for Nanimarquina, Backyard is among the stunning new rugs in a collection that plays homage to the boisterous beauty of flora and fauna. The hand-tufted wool covering comes in three sizes: 170 by 240 centimetres, 200 by 300 centimetres and 300 by 400 centimetres.

7
Five to Nine by Tacchini 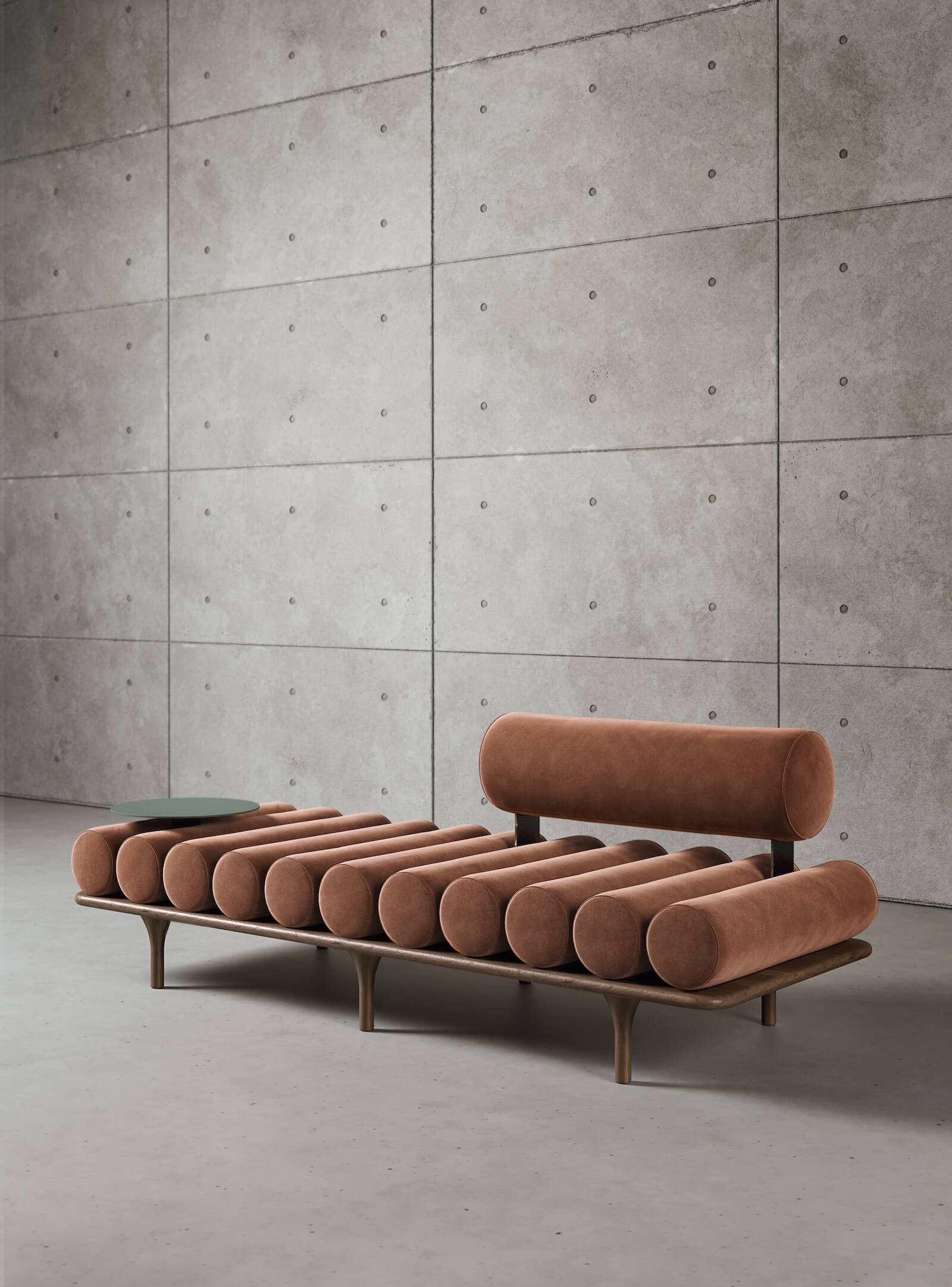 With its soft contours, the Five to Nine daybed by Studiopepe for Tacchini feels at once precious and inviting. The design is characterized by padded roller cushions along its entire length —upholstered in leather or mohair velvet — and a lathed-wood base structure with delicately contoured legs. A round table with a metal, marble or concrete top augments its functionality. 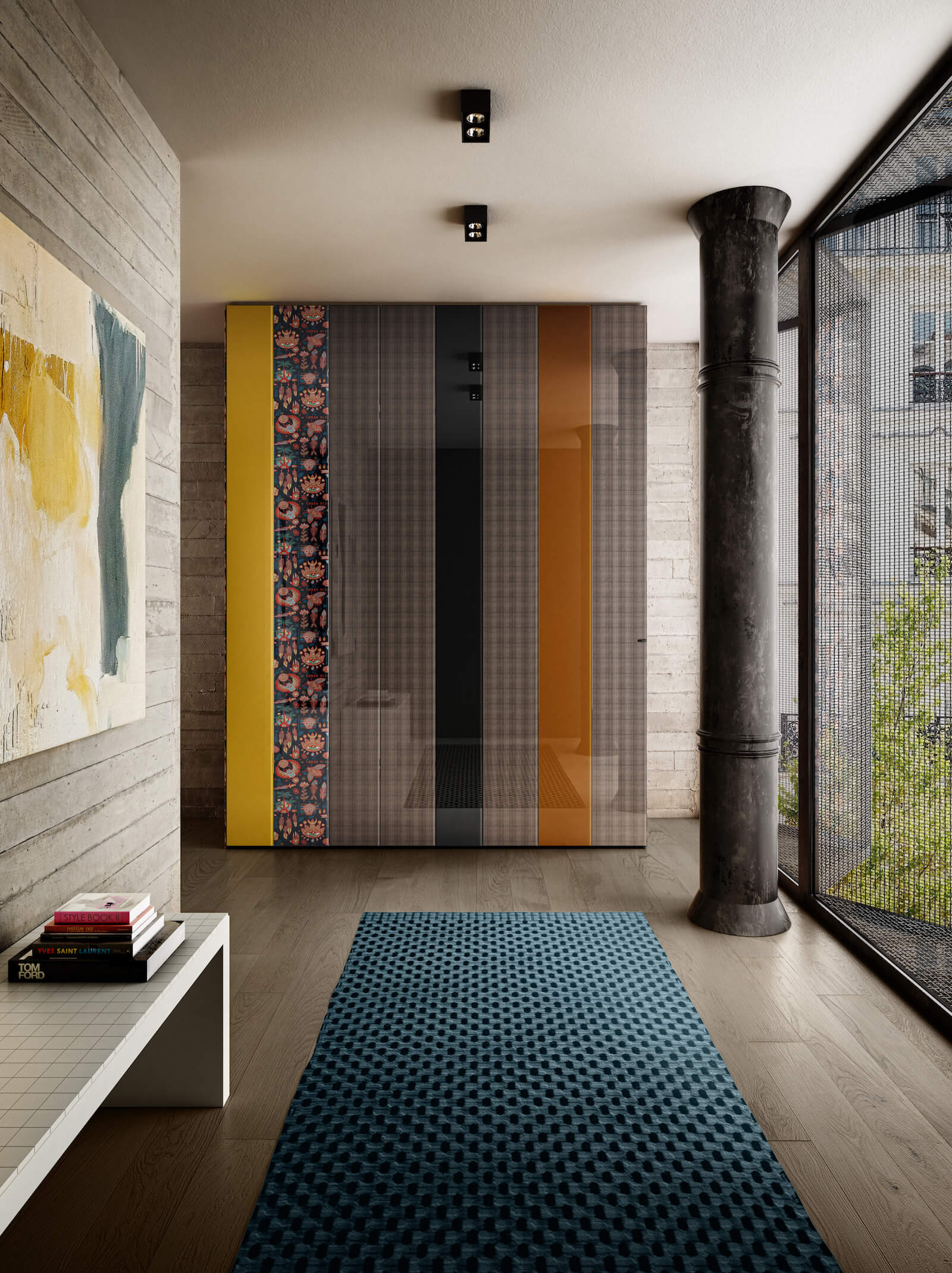 This storage tower by Lago is now offered with wardrobe doors that can be customized thanks to XGlass, a proprietary technology that makes it possible to transfer images — as well as material-mimicking marble, wood, metal and fabric motifs — onto glass. The possibilities for combining and contrasting patterns are endless. 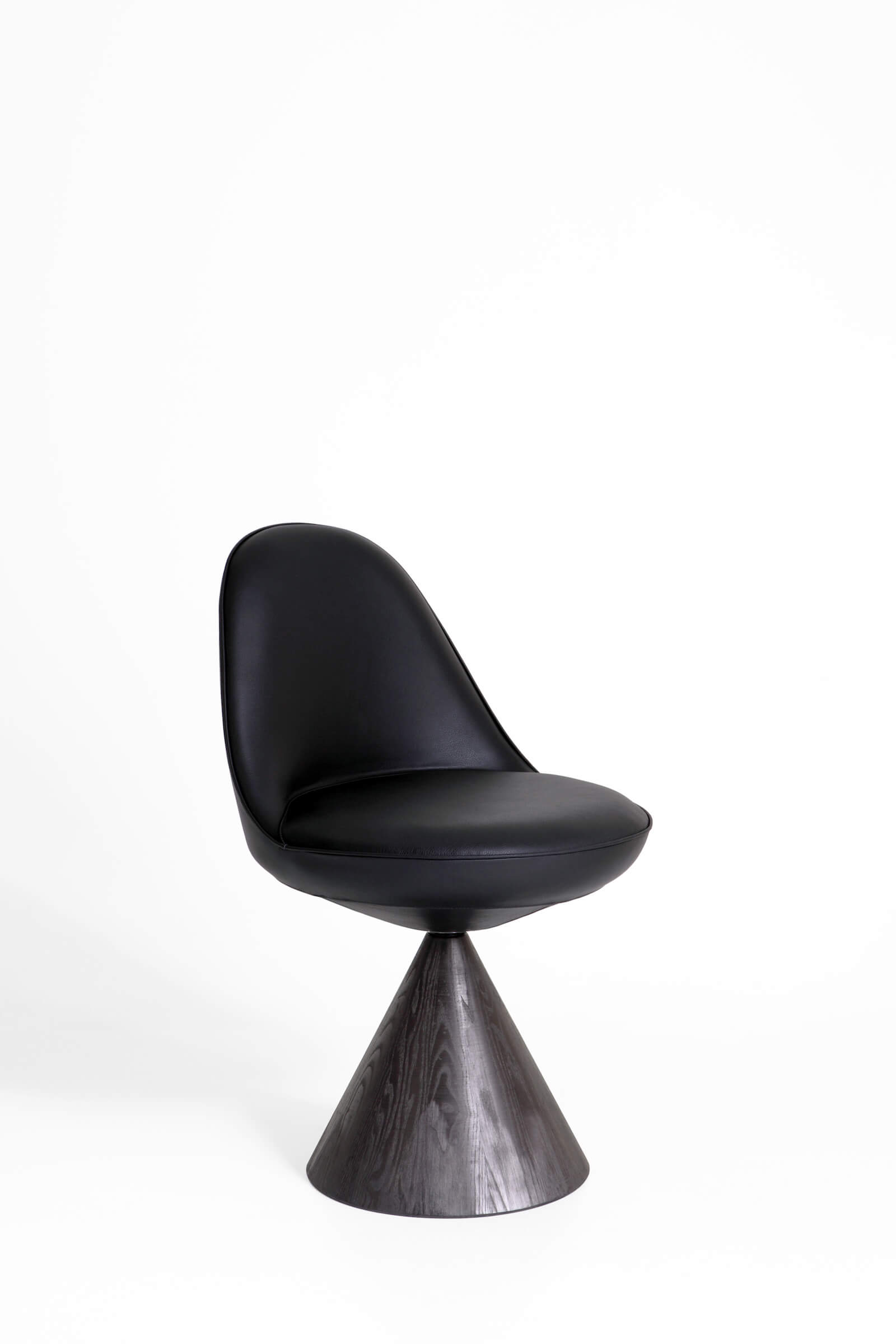 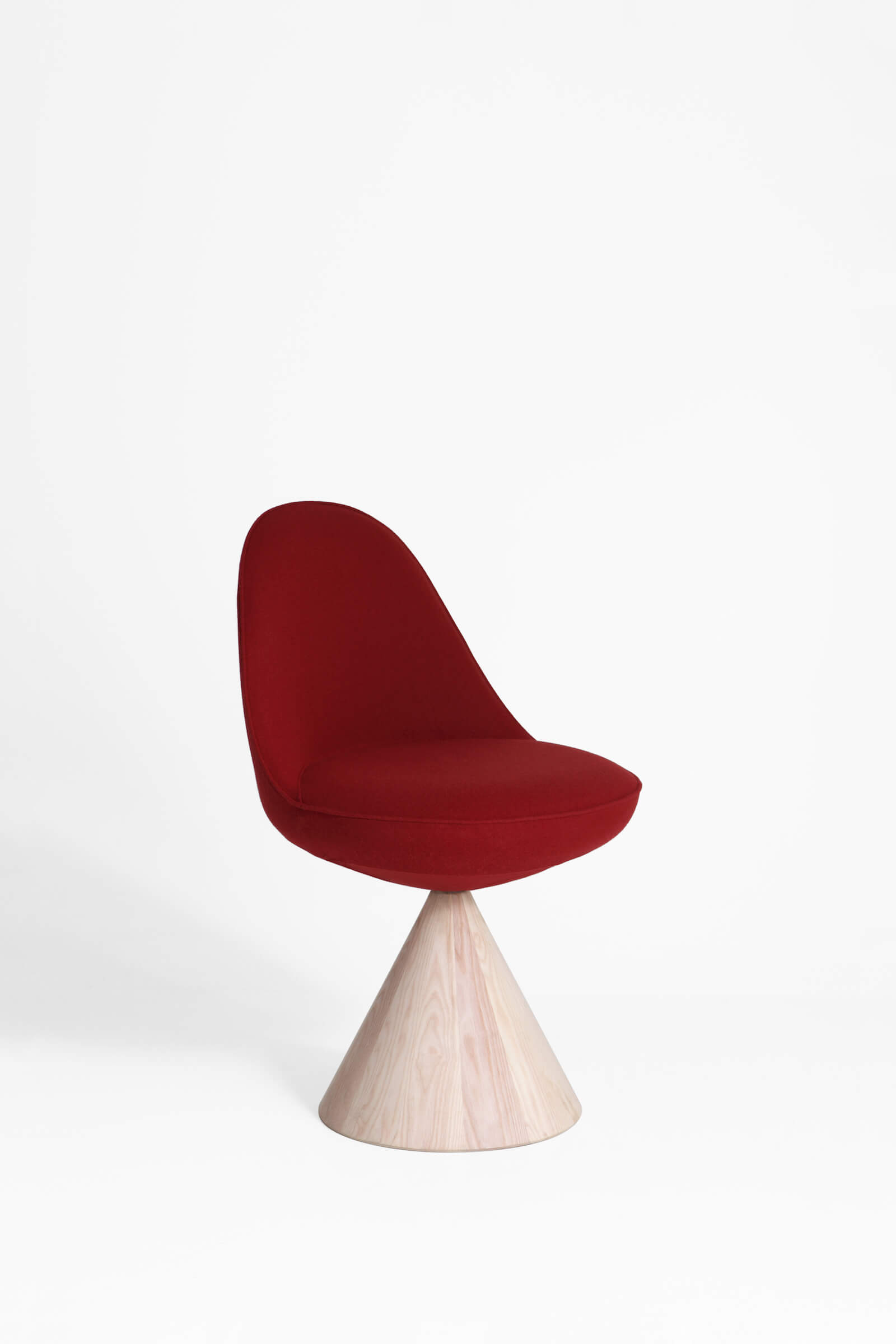 A delightful sense of proportion and balance characterizes GamFratesi’s Romby, a cocoon armchair for Porro. Featuring a solid wood cone base and a padded swivel seat, it is just as suited to an intimate work environment as to a dining room setting. 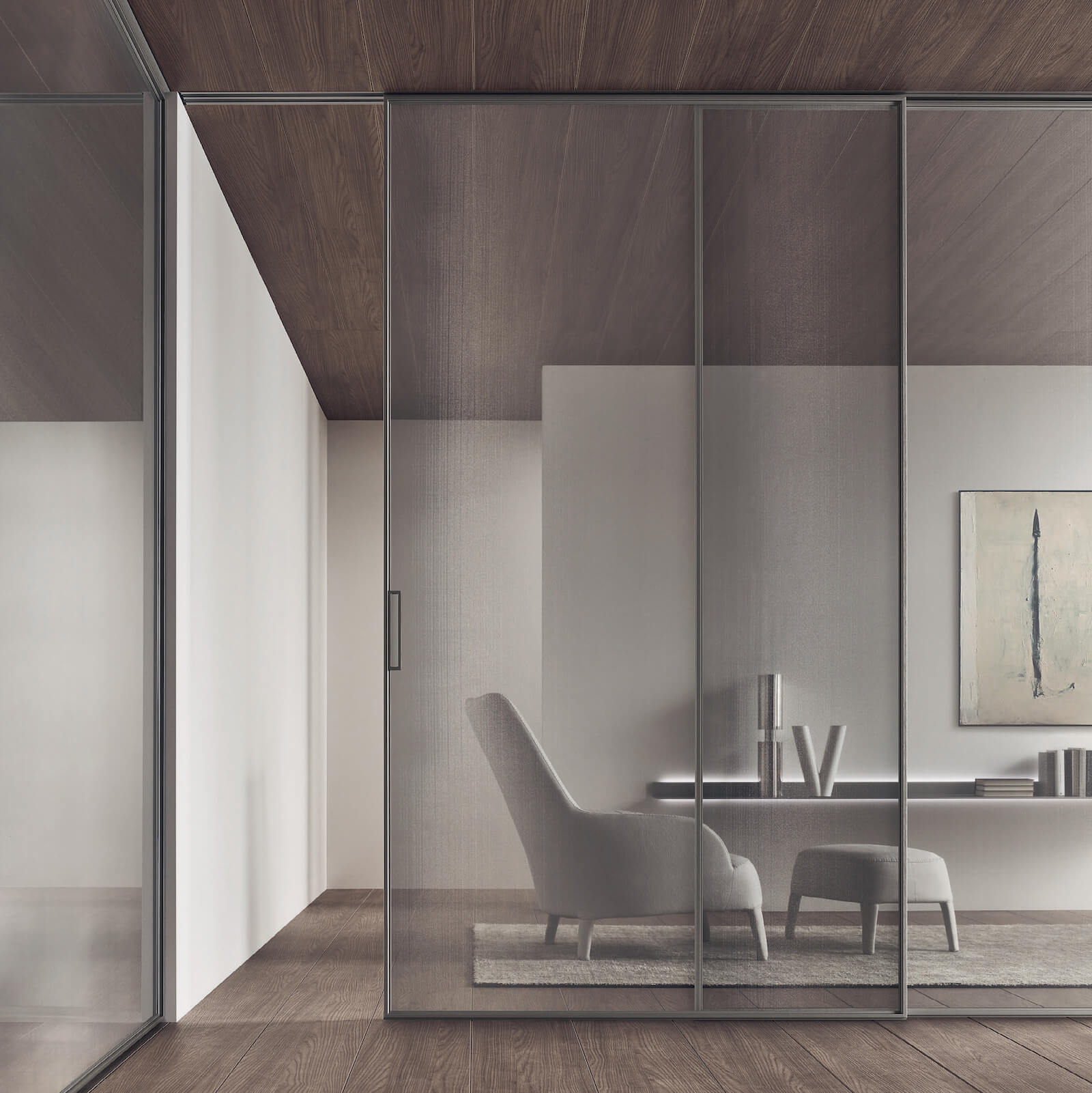 Velaria offers a veiled transparency for residential environments. In 2020, a version featuring an aluminum structure with a platinum finish and a mesh glass with aluminum finish has been added to the sliding panel system, designed by Giuseppe Bavuso for Rimadesio 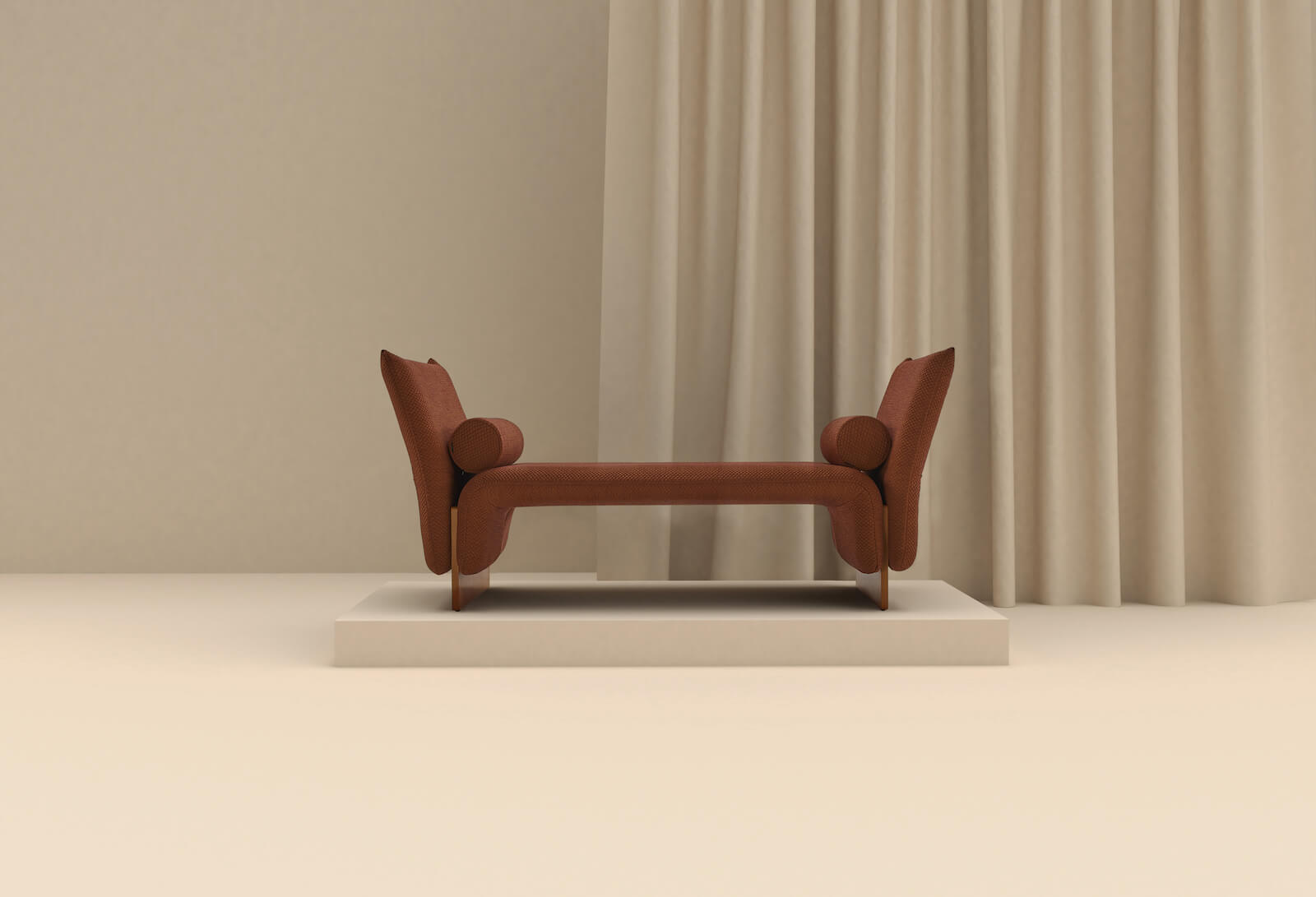 Valencia’s Arab heritage inspired PerezOchando to design this unusual piece for Sancal, whose name and form refer to the divan that would often be found in the “ambassador room” where royalty would receive foreign dignitaries. The range includes a chaise longue, modular benches and an armchair with a natural or stained wood base and a choice of upholstery. 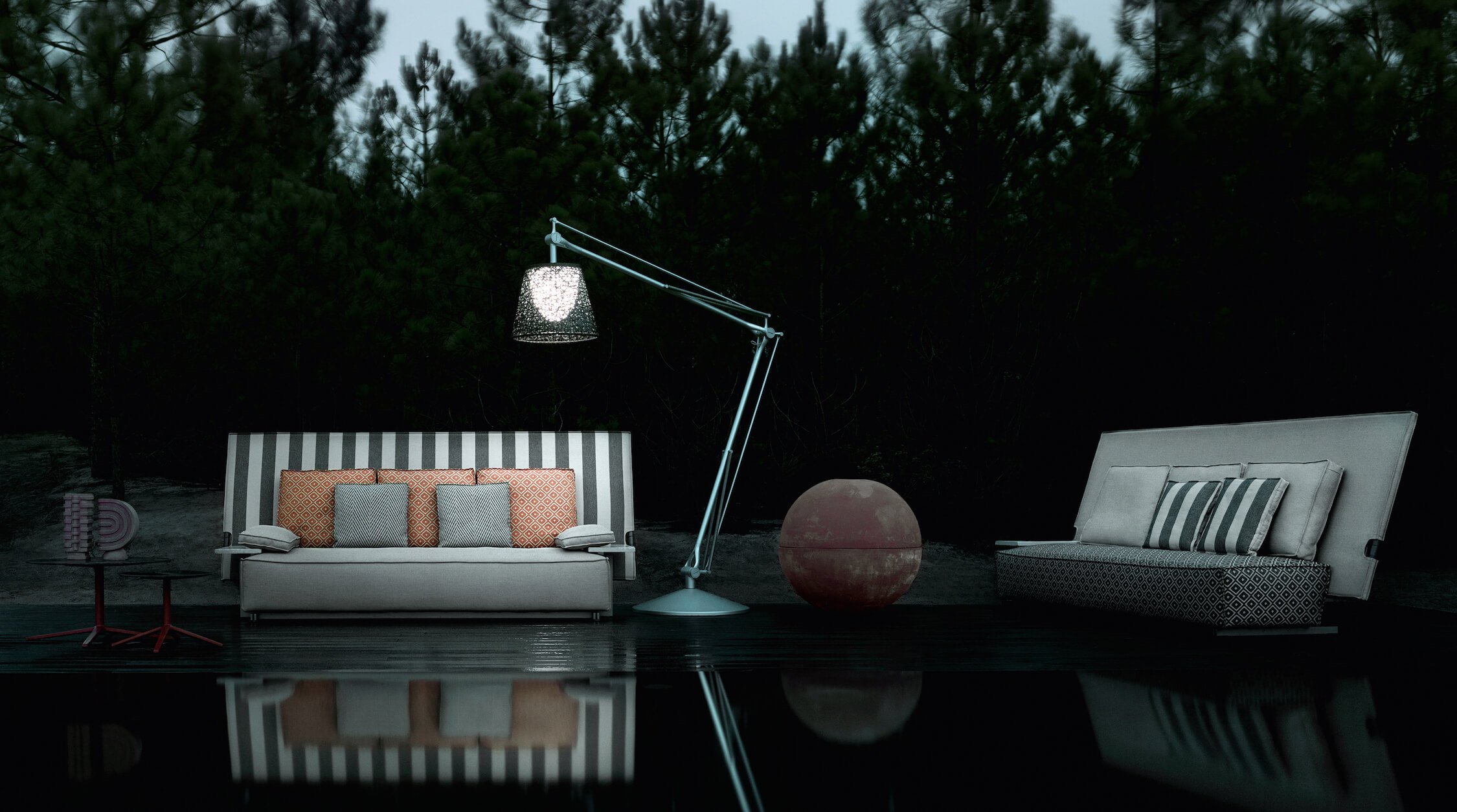 Philippe Starck debuts his first-ever collection for B&B Italia — the whimsically named Oh, It Rains! for the brand’s outdoor offerings. The seating stands out for its generous backrest, which can be reclined thanks to a new type of mechanical joint.

This capacious soft seating system by Bonaldo combines rectangular, pentagonal and irregular-shaped elements without any need for joinery. The backrests are perched atop the islands and can also be repositioned. 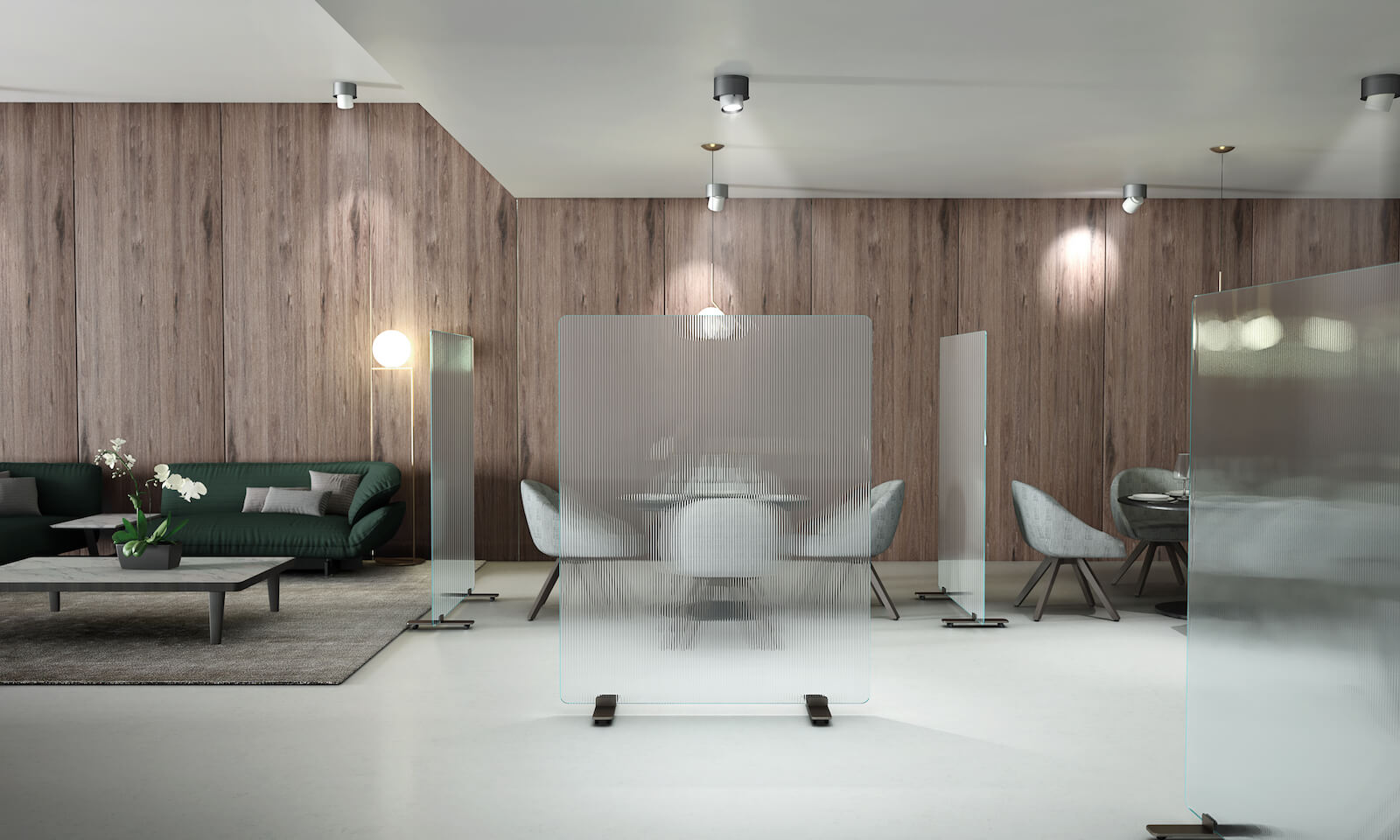 Glas Italia proves that screens — needed more than ever with physical distancing mandates — can and should be beautiful. Skin was designed for bars and restaurants, hotel reception areas and offices as a flexible system of tempered and laminated glass panels available in a multiplicity of finishes. They can be specified with or without wheels. 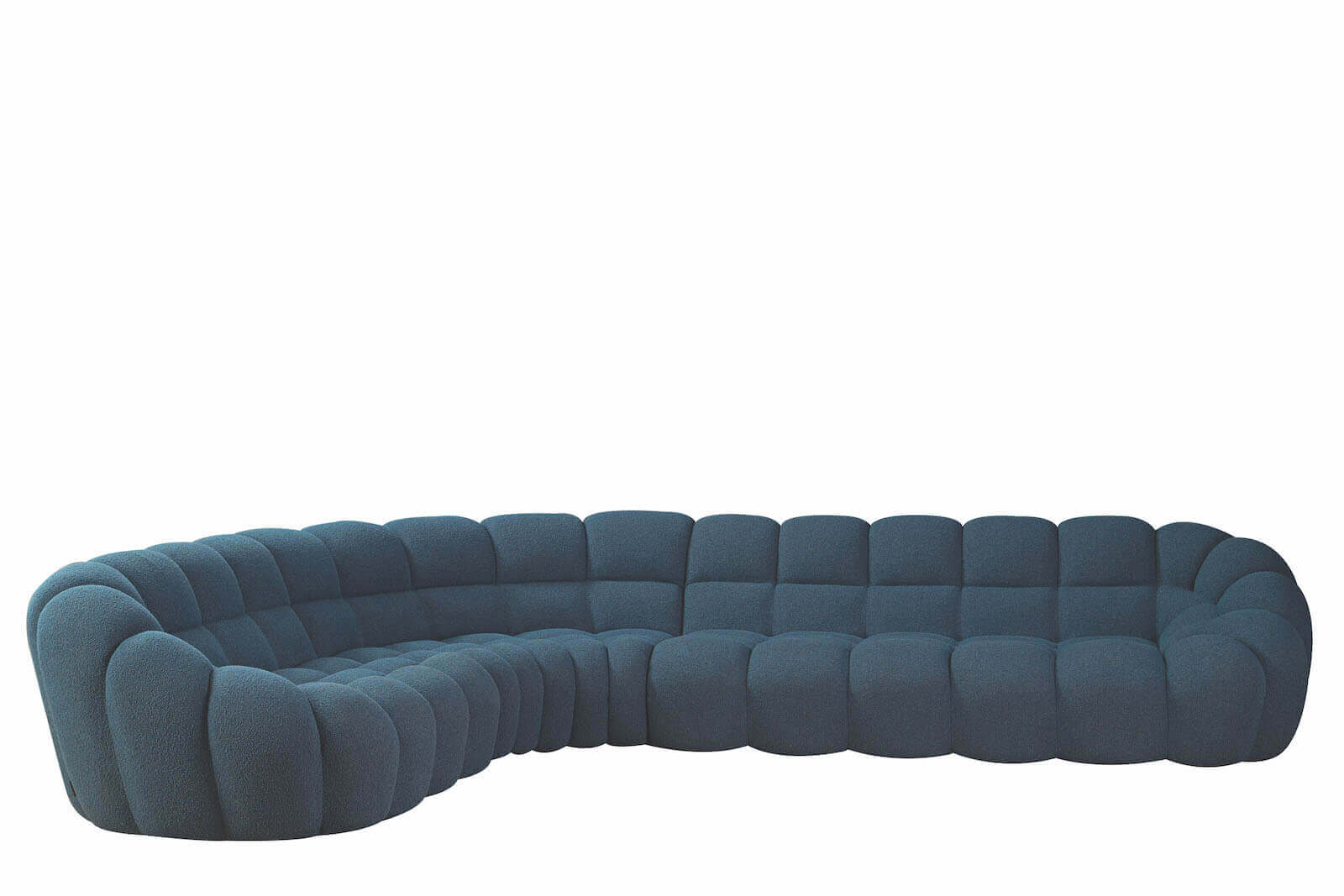 Designed by Sacha Lakic, the Perspective sofa for Roche Bobois exudes a welcoming bounciness thanks to its foam seat and back cushions, which are upholstered in Orsetto Flex fabric. The structure is in solid fir, pine plywood and engineered composite wood and the base is in varnished solid beech. 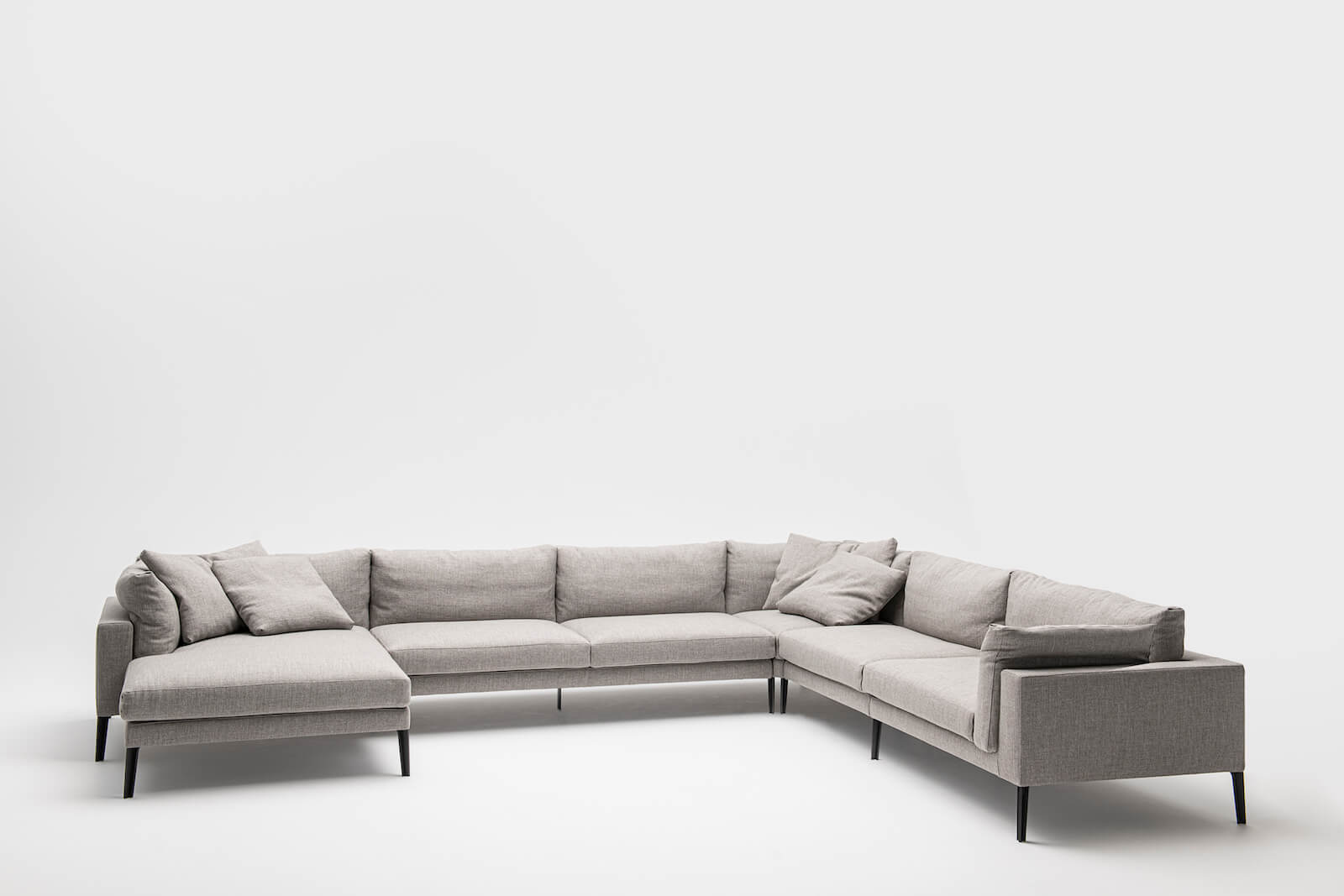 Piero Lissoni’s minimal design for Living Divani is an update — with metal feet — of a system that emphasizes modularity. It is suitable for both residential and contract spaces. 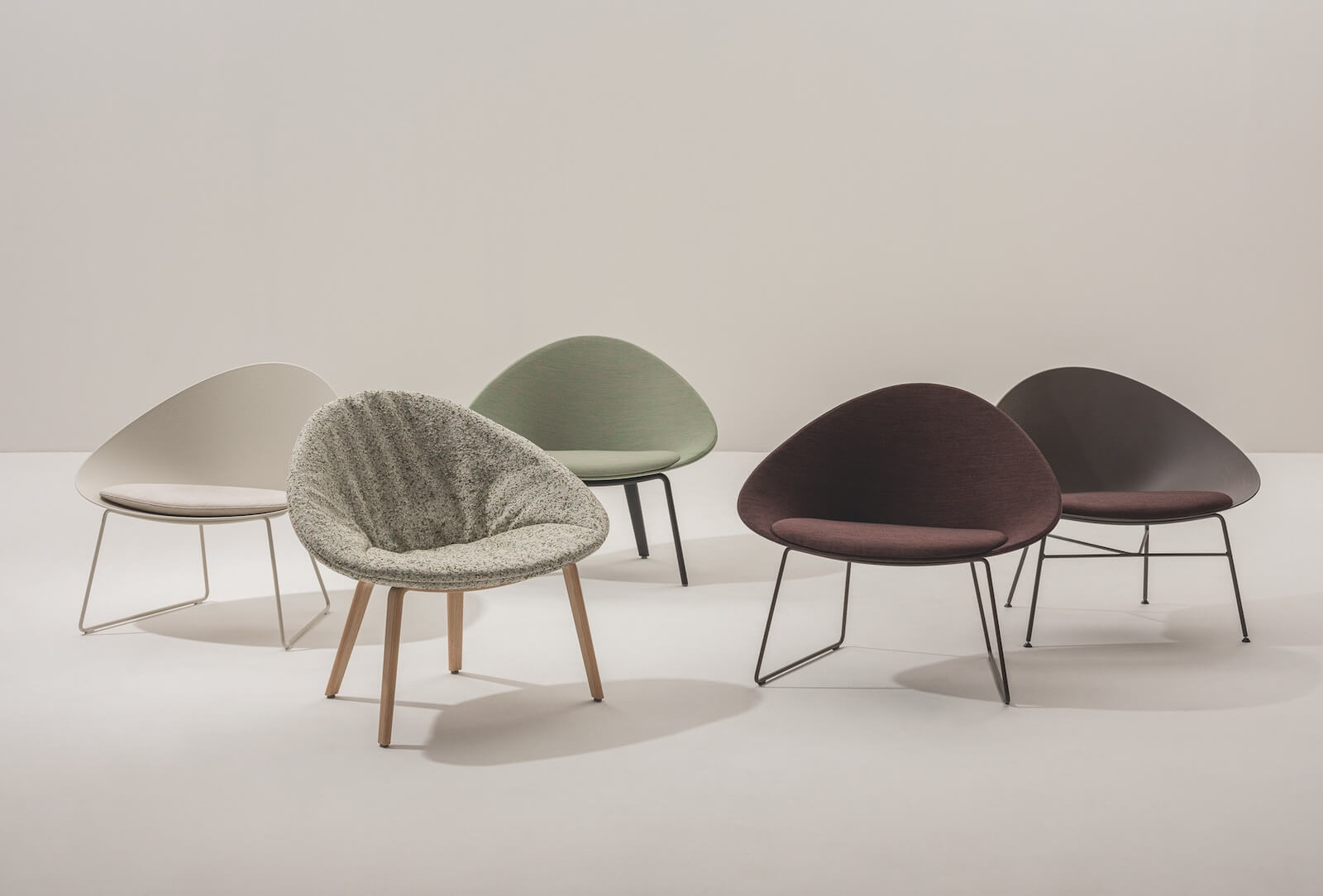 Designed by Lievore + Altherr Désile Park for Arper, Adell is inspired by nature and respectful of it: Its shell is made of 80 per cent recycled polypropylene that can be further disassembled and upcycled, while its seating is constructed without glue or VOCs. It’s offered in a trio of bases — metal or wood four-leg or a metal sled base — and with or without full upholstery. 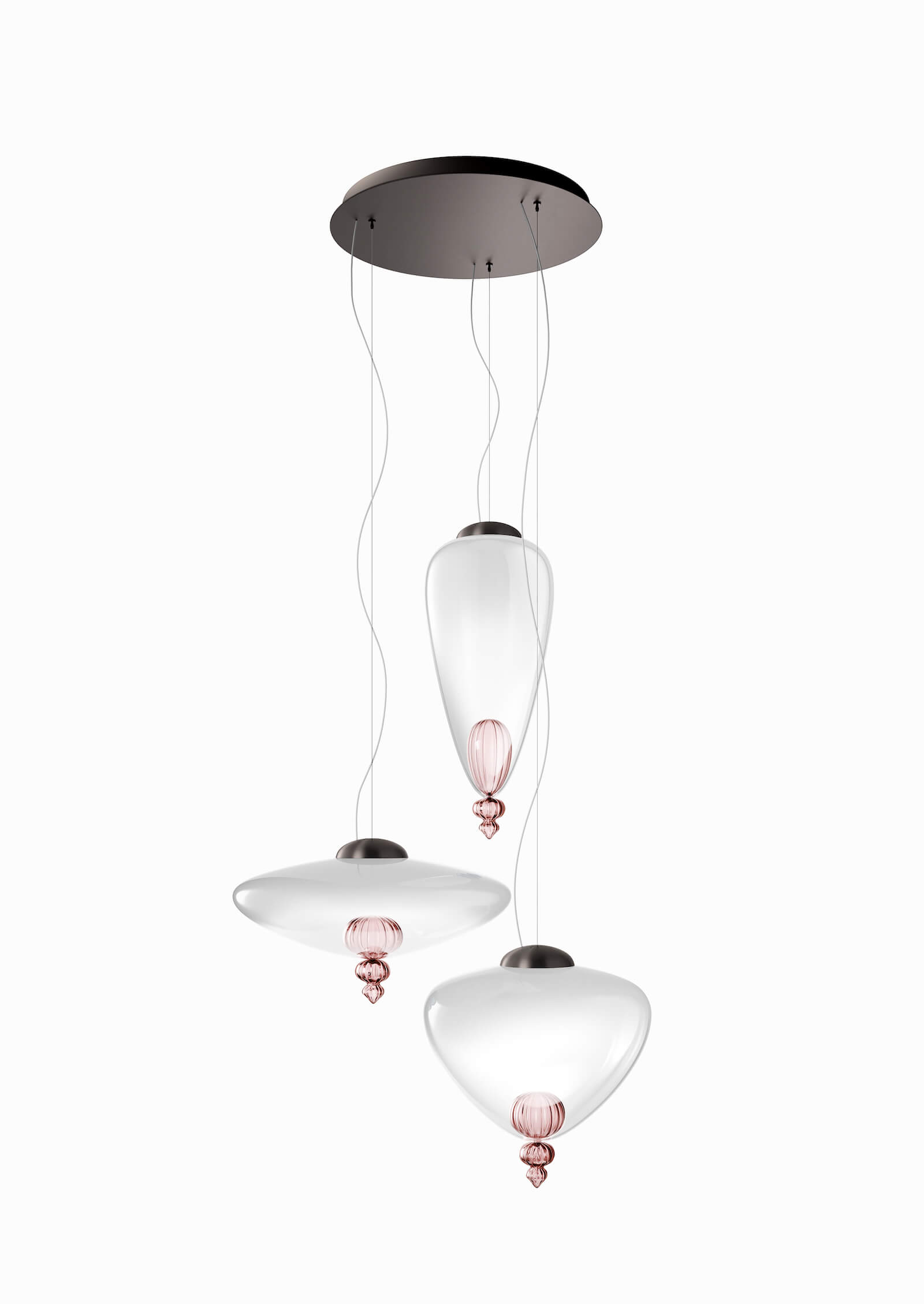 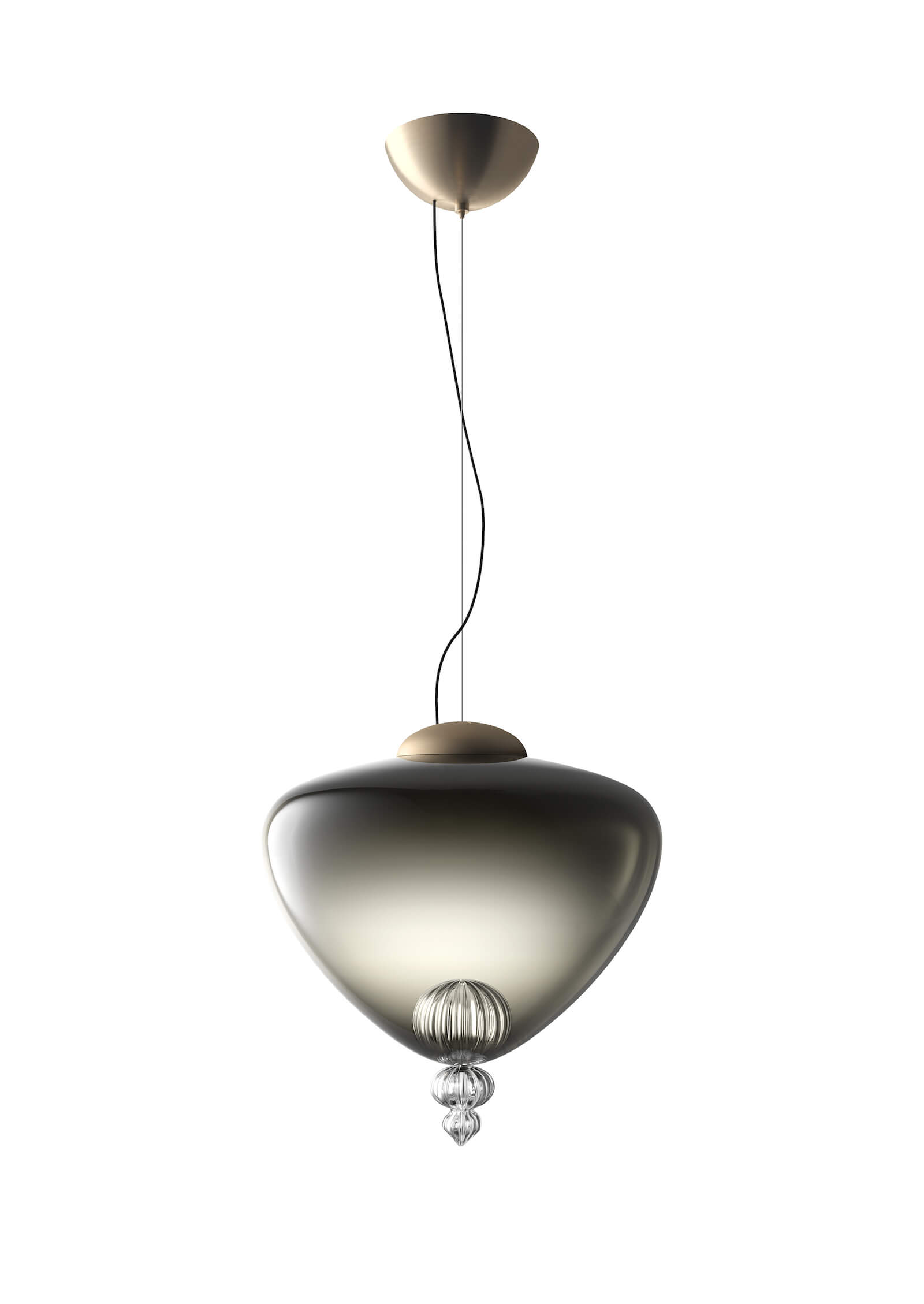 Named after the Sanskrit word for “lotus,” Barovier & Toso’s evocative Padma is made entirely of Venetian crystal, blown and shaped by hand. It is composed of three parts: an external diffuser in white or grey, a ribbed “fruit” enclosed by it and a flourish that protrudes from the whole. The decorative crystal elements come in seven hues, including rose, citron and aquamarine. Available in table and pendant versions, the fixture has an LED light source. 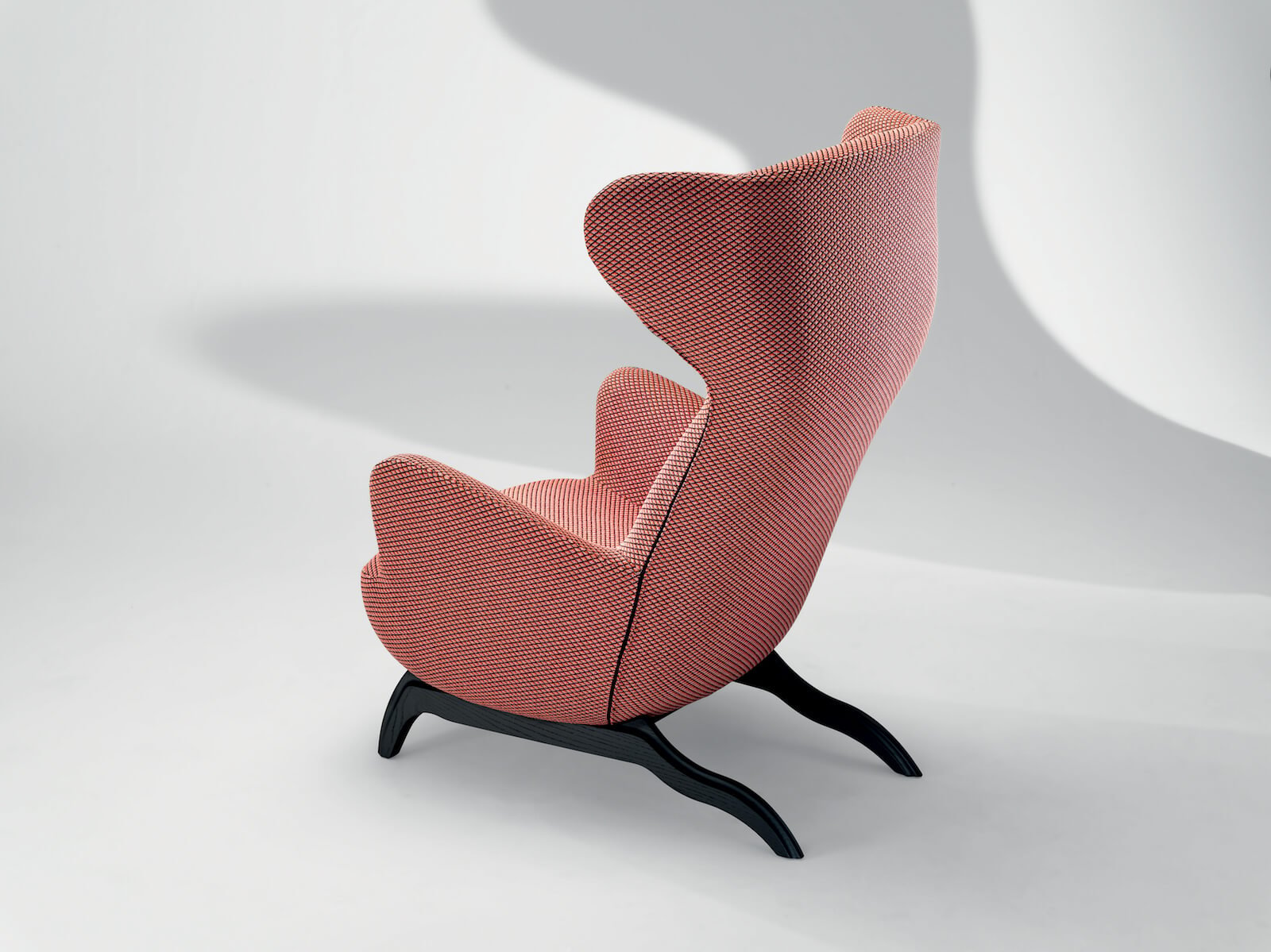 Carlo Mollino is the star of Zanotta’s collection, which renews his vintage icons. Ardea CM sheathes the female-form-inspired armchair in a diamond-patterned scarlet fabric that closely approximates the designs found in Mollino’s newly discovered drawings. 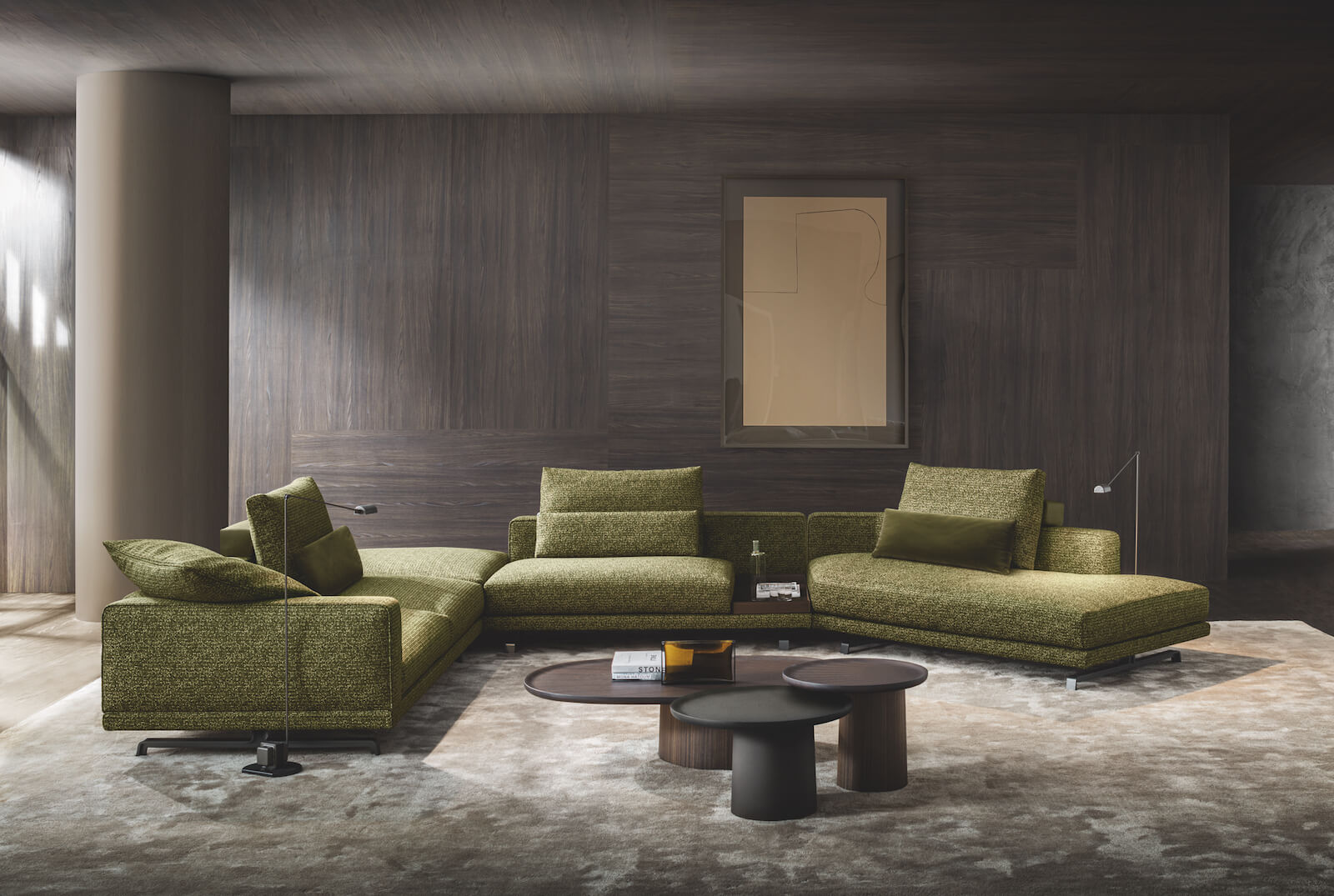 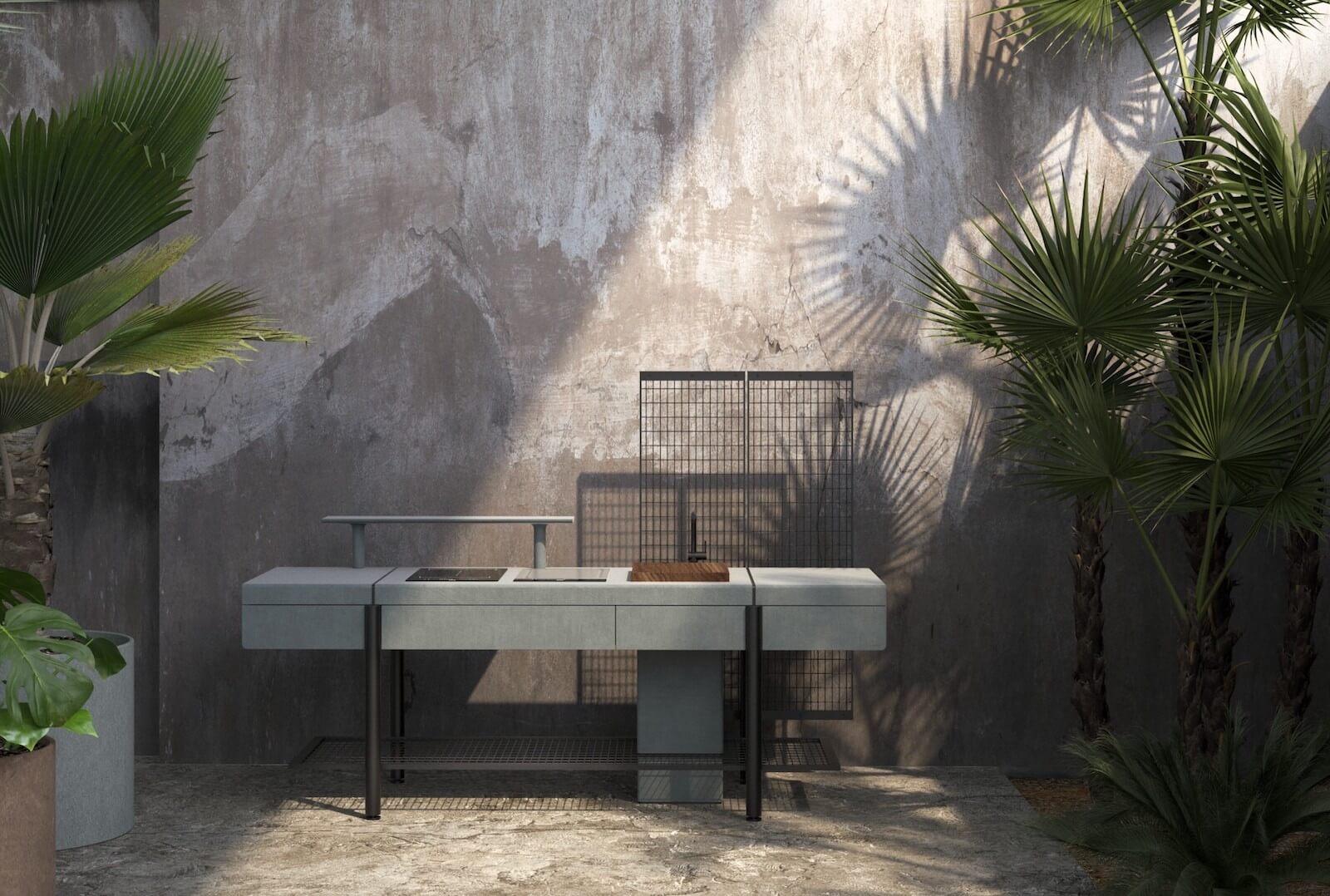 Elmar, a design and production company of kitchens and bathrooms, presents a new kitchen project designed by architects Marco Merendi and Diego Vencato. Libera’s form and function derive from a careful reflection on contemporary living. Made with a sustainable cement (in the shades mud, anthracite, rust, lichen, ocean and cloud), the fresh, elegant system is suitable for both indoors and outdoors. 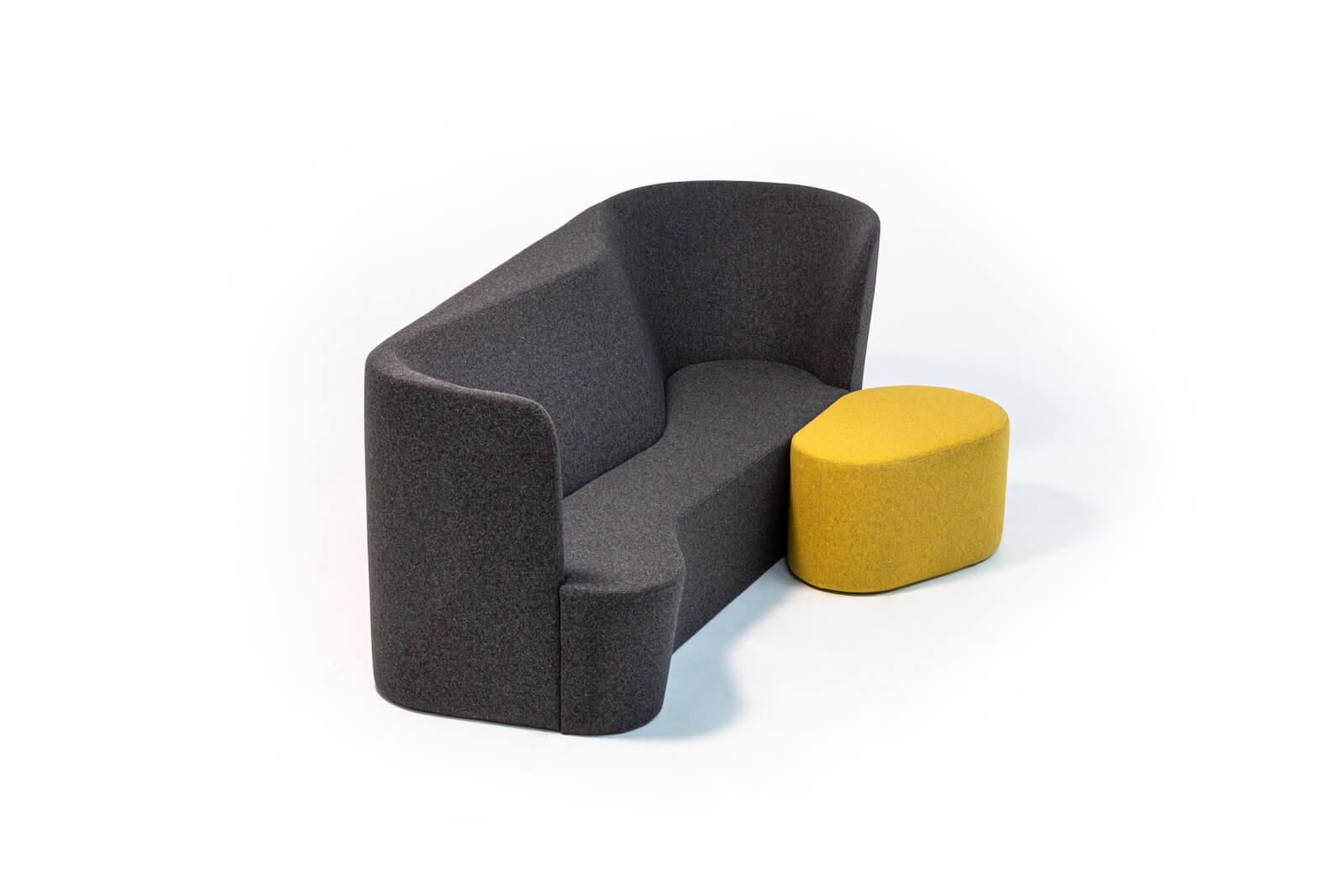 Designed by Alfredo Häberli, the Taba collection consists of a sofa, two swivel armchairs, a bench and a couple of pouffes whose organically sinuous shapes were inspired by a childhood game involving a cow’s bone played by the designer in his native Argentina. 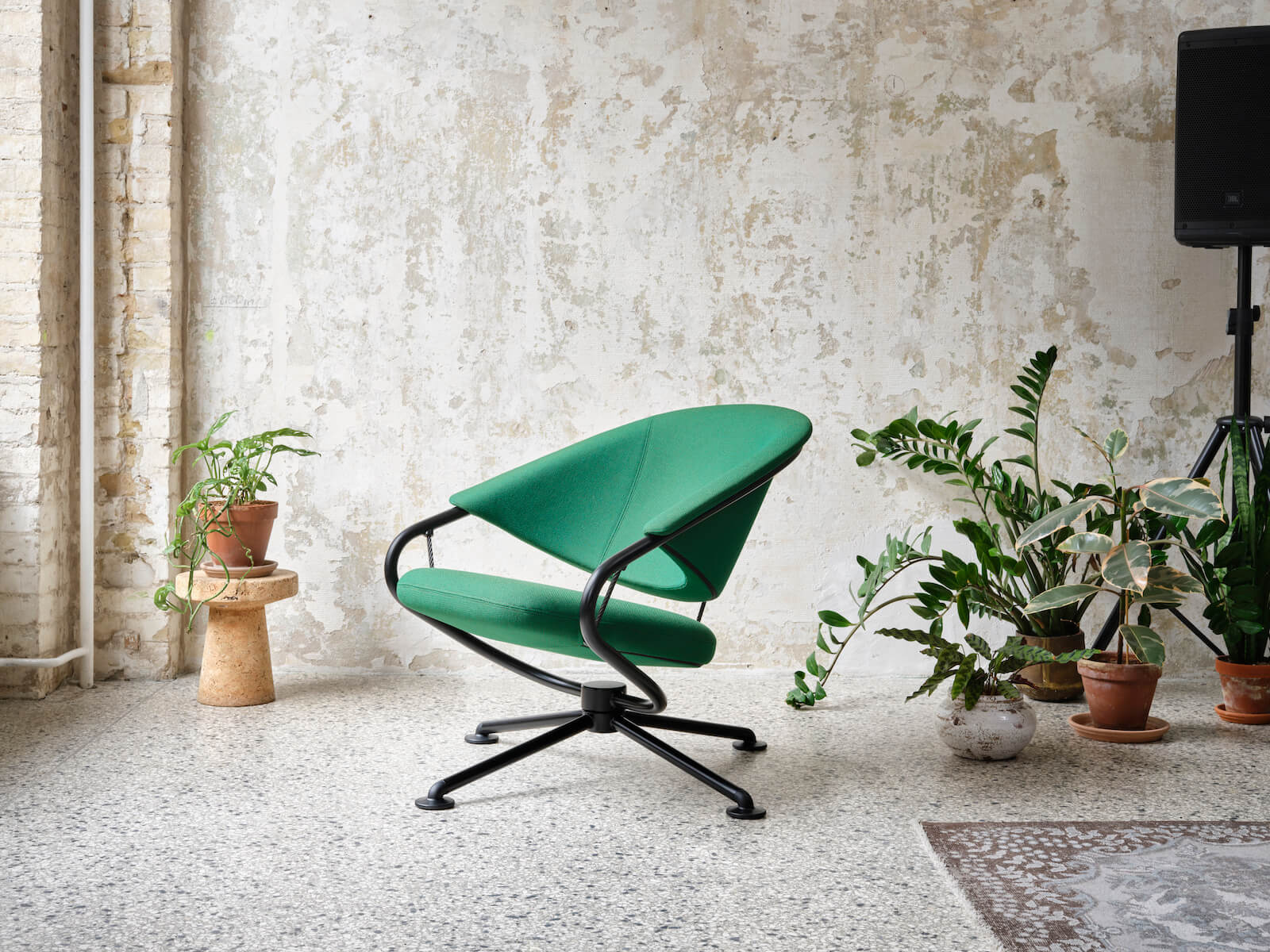 Konstantin Grcic is best know for constantly reinventing the chair. And with Citizen for Vitra, he has innovated once again, designing a seat suspended on three cables affixed to a steel frame — and not even touching the backrest — that allow it to swing in all directions. 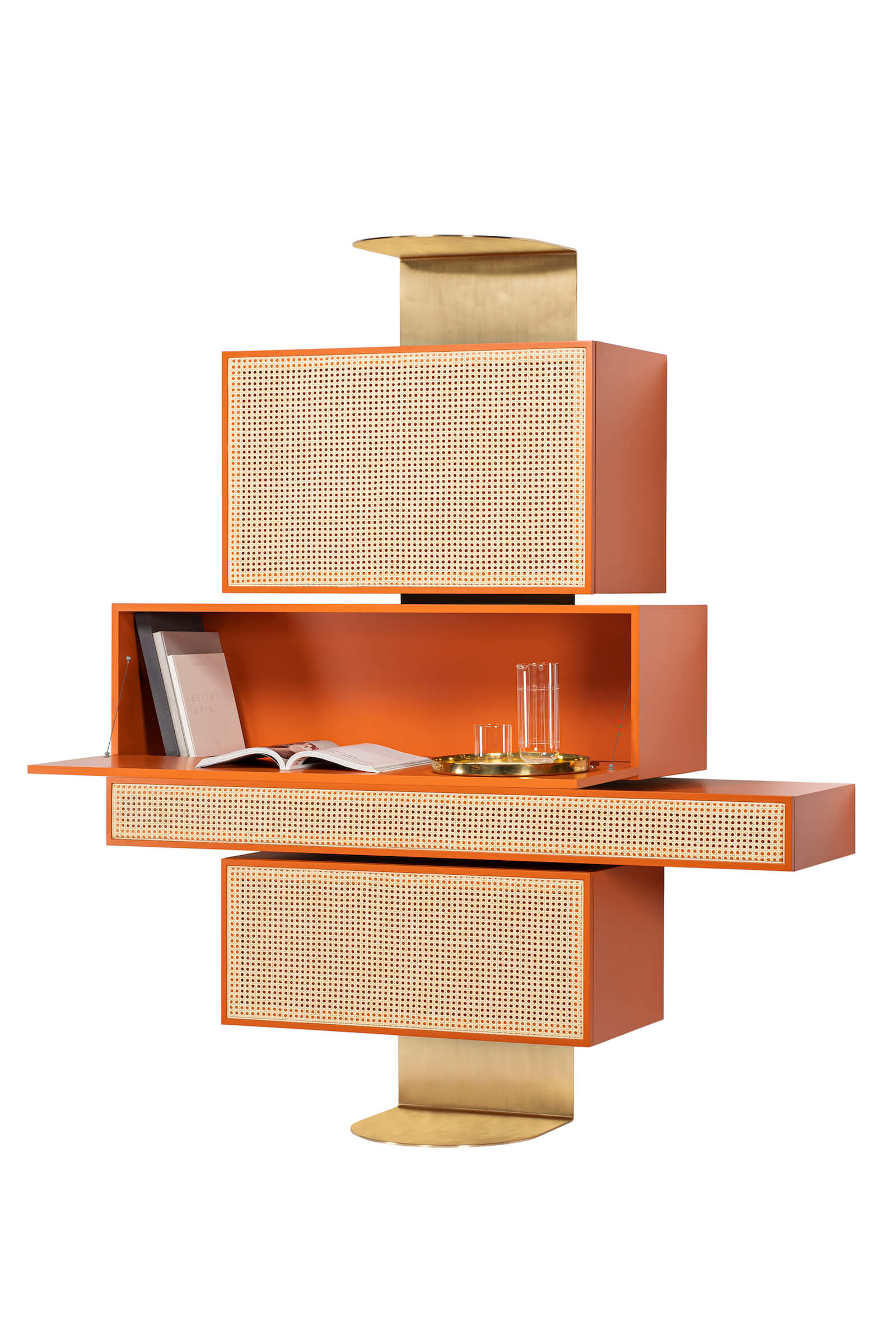 GTV‘s trademark woven detail in Vienna straw is given exuberant new life in this cabinet inspired by the stacked-box architectural language of the New Museum in New York City. Designed by Storage Associati, the piece is composed of volumes suspended on a wall-mounted metal structure, each providing a specific function: two lower drawers and two upper compartments with doors that flip down. 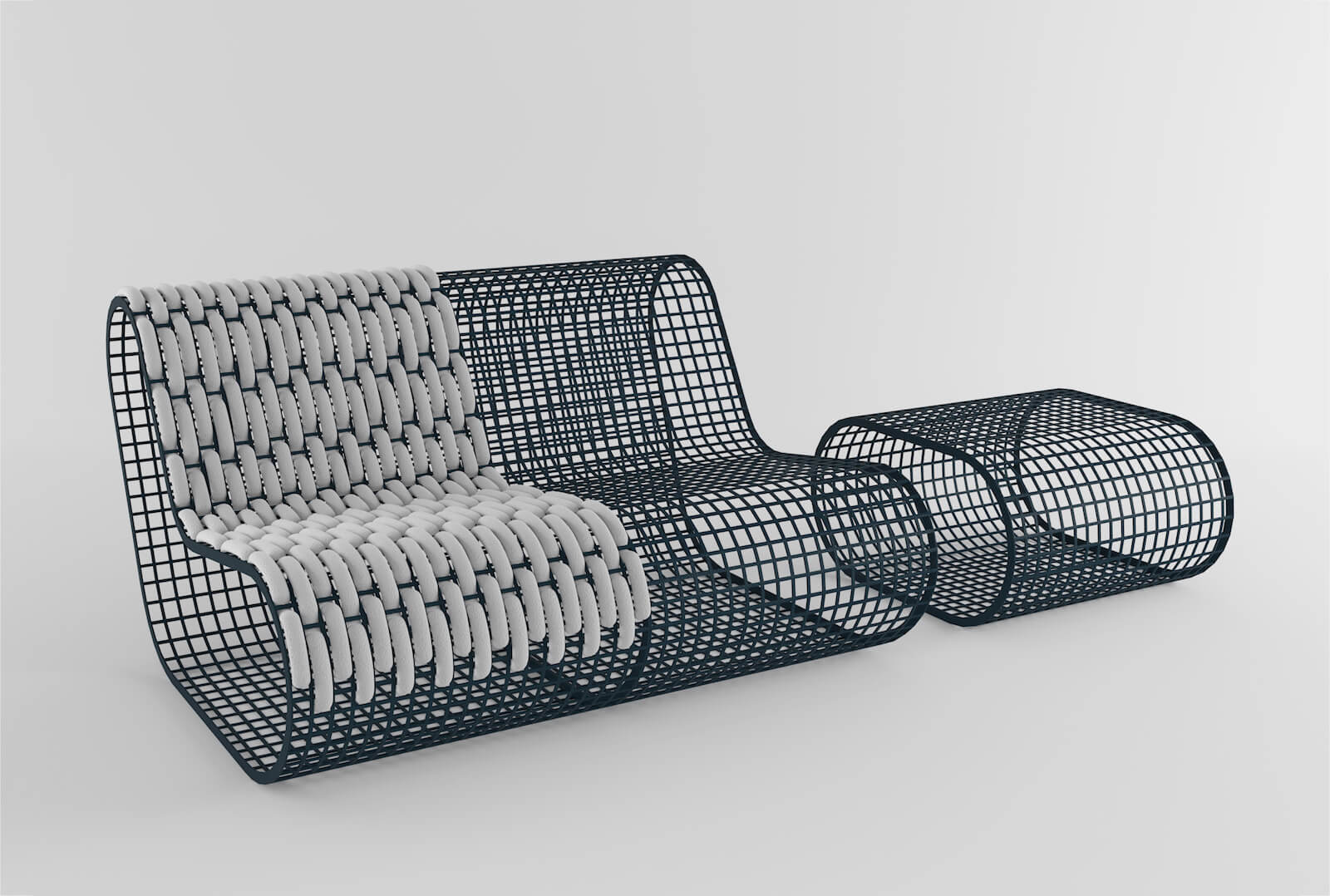 Buit means “empty” in the Valencian dialect, yet this design by Mayice Studio for Spain’s Gandiablasco is full of personality. Formed with aluminum mesh, the voluptuous armchair and pouffe/side table can be clad in a thick Febrik knit by Kvadrat. The Danish company’s braided fabric, filled with a quick-drying foam, has the feel of wool but is suitable for the outdoors.

We talk to Poltrona Frau’s Nicola Coropulis about the future of Italian design – and select 25 pieces from brands that would have premiered during Milan Design Week.