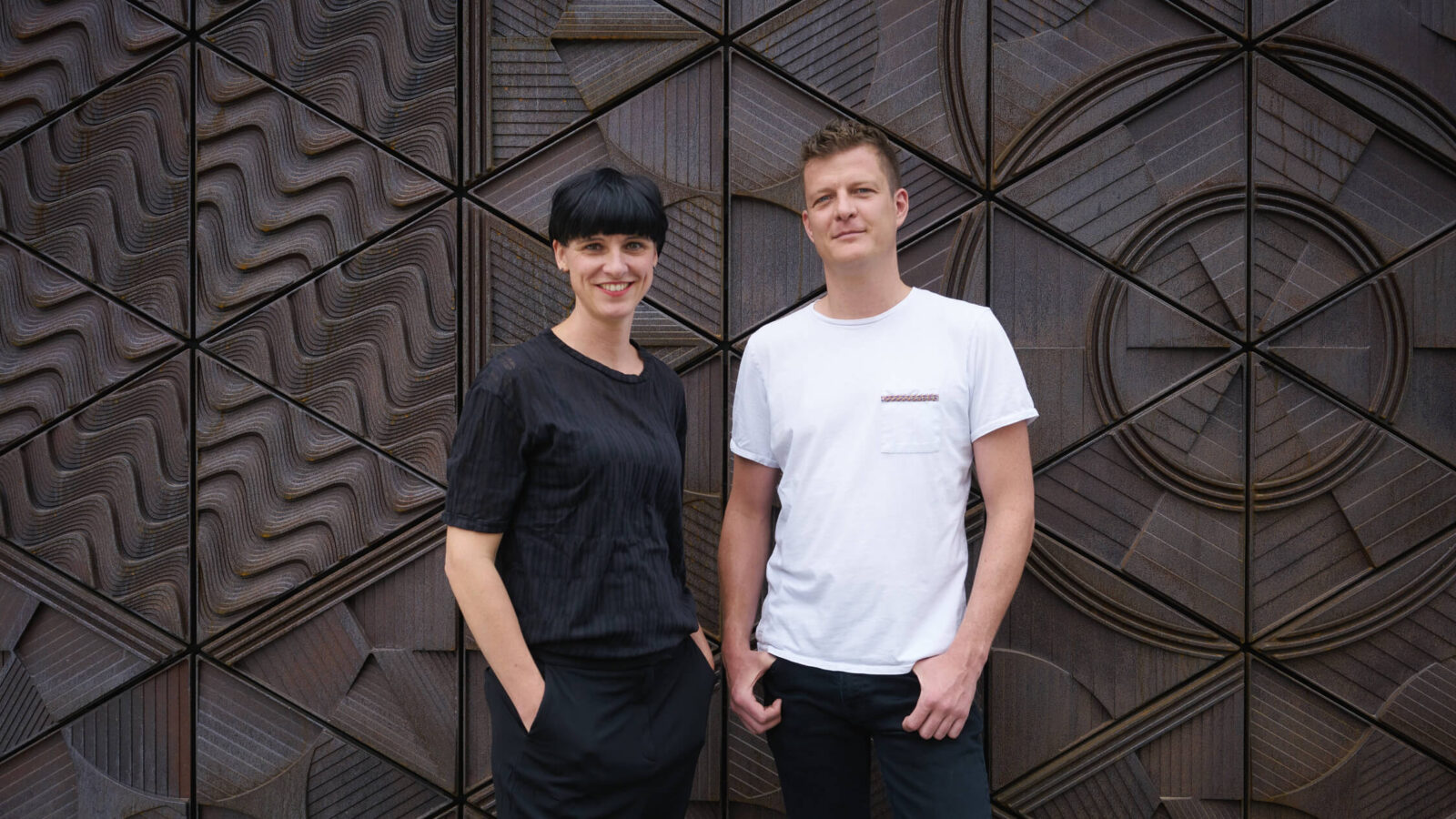 In Germany, Studio ABERJA is amassing a charming portfolio defined by pastel hues and geometric surfaces that mix digital production and artisanal precision.

Rarely do emerging design firms land large-scale hospitality projects. Even less common are practices that use such an expansive undertaking to inaugurate their independent ventures. For architects Robin Heather and Juliane Maier, the commission to work on the 100-room third location of German chain Lindenberg Hotels was the impetus to establish Studio ABERJA, their almost four-year-old firm.

Working out of the former headquarters of the Frankfurt chapter of the Hells Angels (a gun was found behind a radiator in a neighbouring unit during renovations, the story goes), the duo are amassing a distinct portfolio defined by their graphic handling of colour and texture, mixing Art Deco and Art Nouveau references with contemporary digital software. 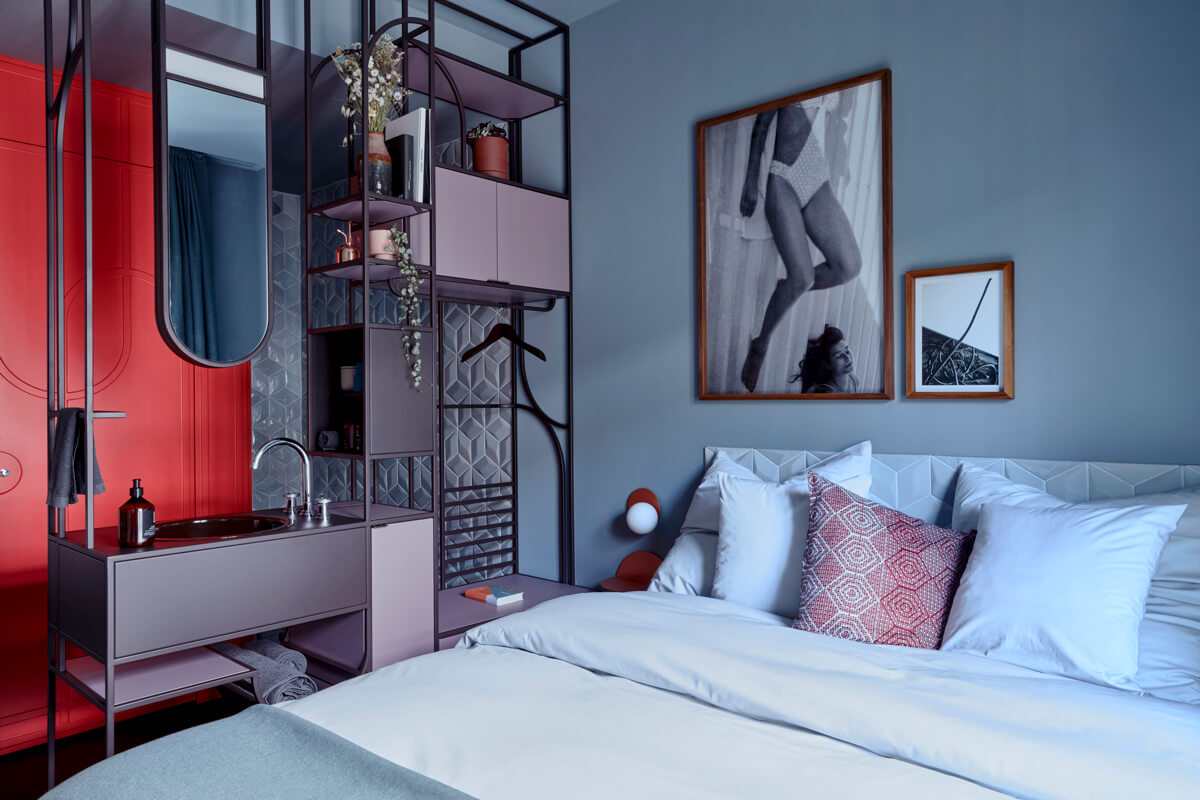 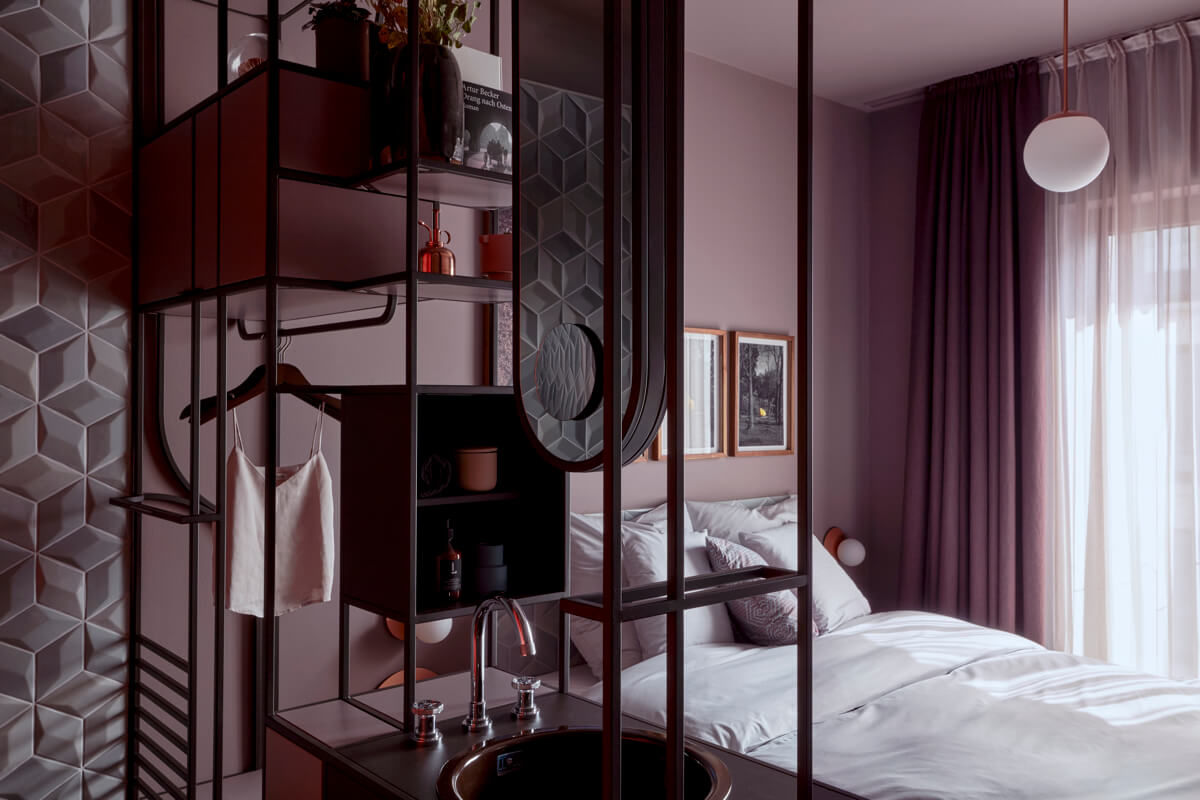 Like the public spaces throughout the hotel, the designers added ample colour to each suite. 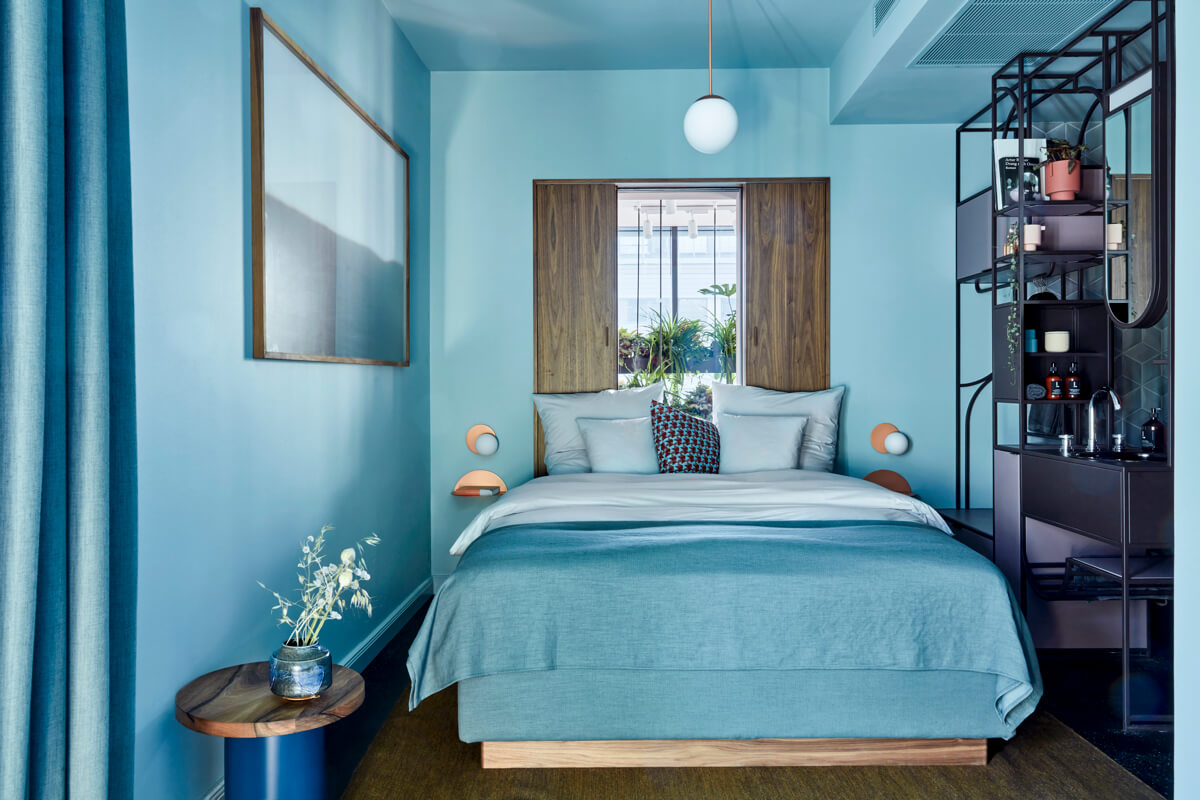 Unique detailing and custom elements, such a the charming sconces framing the bed, add a residential feel to Lindley’s rooms.

Though each designer boasts extensive experience in the offices of renowned European studios — Heather with Coop Himmelb(l)au and Maier with UNStudio — it was during their shared time with local outfit Franken Architekten that the pair began work on the Lindenberg hotel chain’s latest structure in the city’s Osthafen district. Eventually, the duo took the lead on the project’s interiors while remaining consultants for the exterior. “We were very lucky in that we didn’t have to go for an acquisition,” Heather notes, “but had this project waiting, where we could immediately afford to hire employees.”

The Lindley Lindenberg’s many shared public spaces – from a communal kitchen to an atmospheric bar and an intimate terrace overlooking the city – are demarcated by vibrant hues and vintage Thonet furnishings. The marigold Parlour (shown) boats ample seating and a sprawling record collection, perfectly suited for a quiet evening in.

Since then, the two have traded their previous experience with complex digital modelling for a distinctly more material-focused approach — using scripting and algorithms from programs like Grasshopper to create bespoke surfaces that define many of their hospitality and retail spaces. 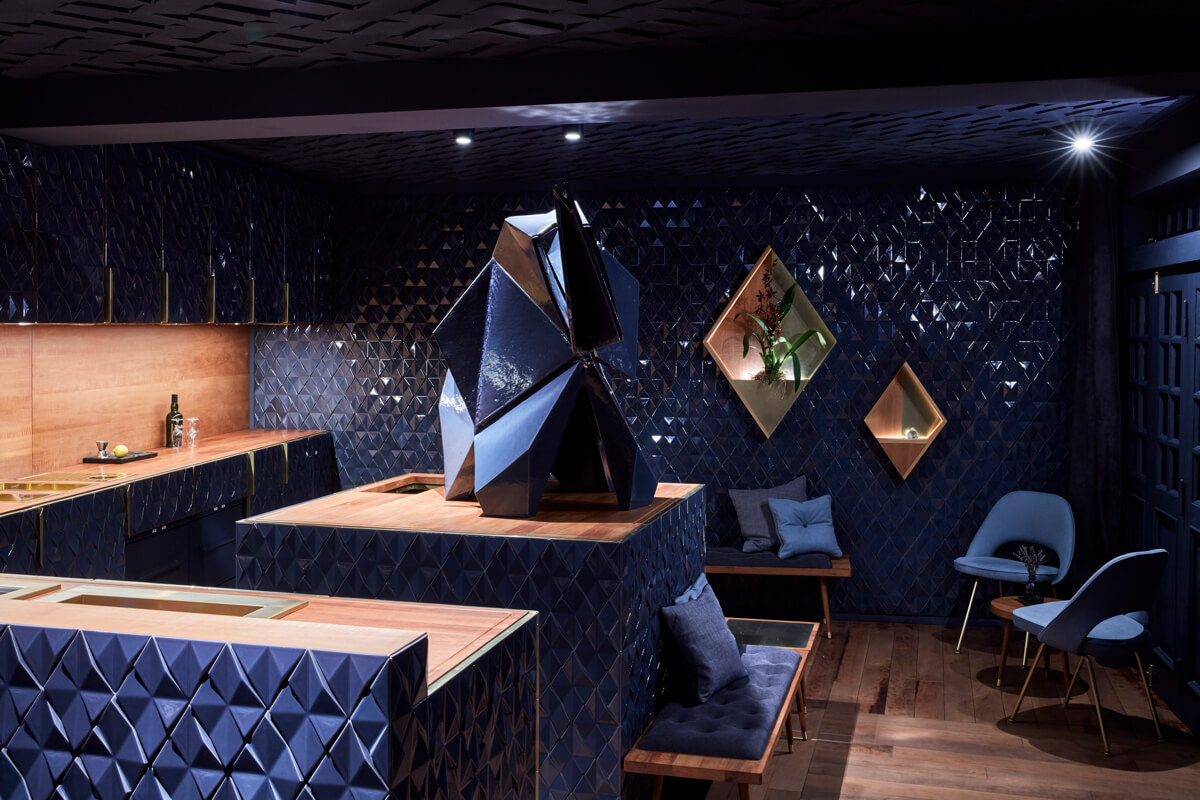 While working on the Lindley Lindenberg, which finally opened its doors in 2019, the studio was tapped to craft the interior of gin bar Bonechina along Frankfurt’s historic Grosse Rittergasse street. In addition to featuring an origami-inspired porcelain elephant (which doubles as a tonic water fountain), the monochromatic space is lined in custom navy ceramic tiles whose four diamond-shaped segments tilt up or down to create a dimensional texture. “It’s like the surface of water,” Heather says, “there is some repetition, but it is not the same.” 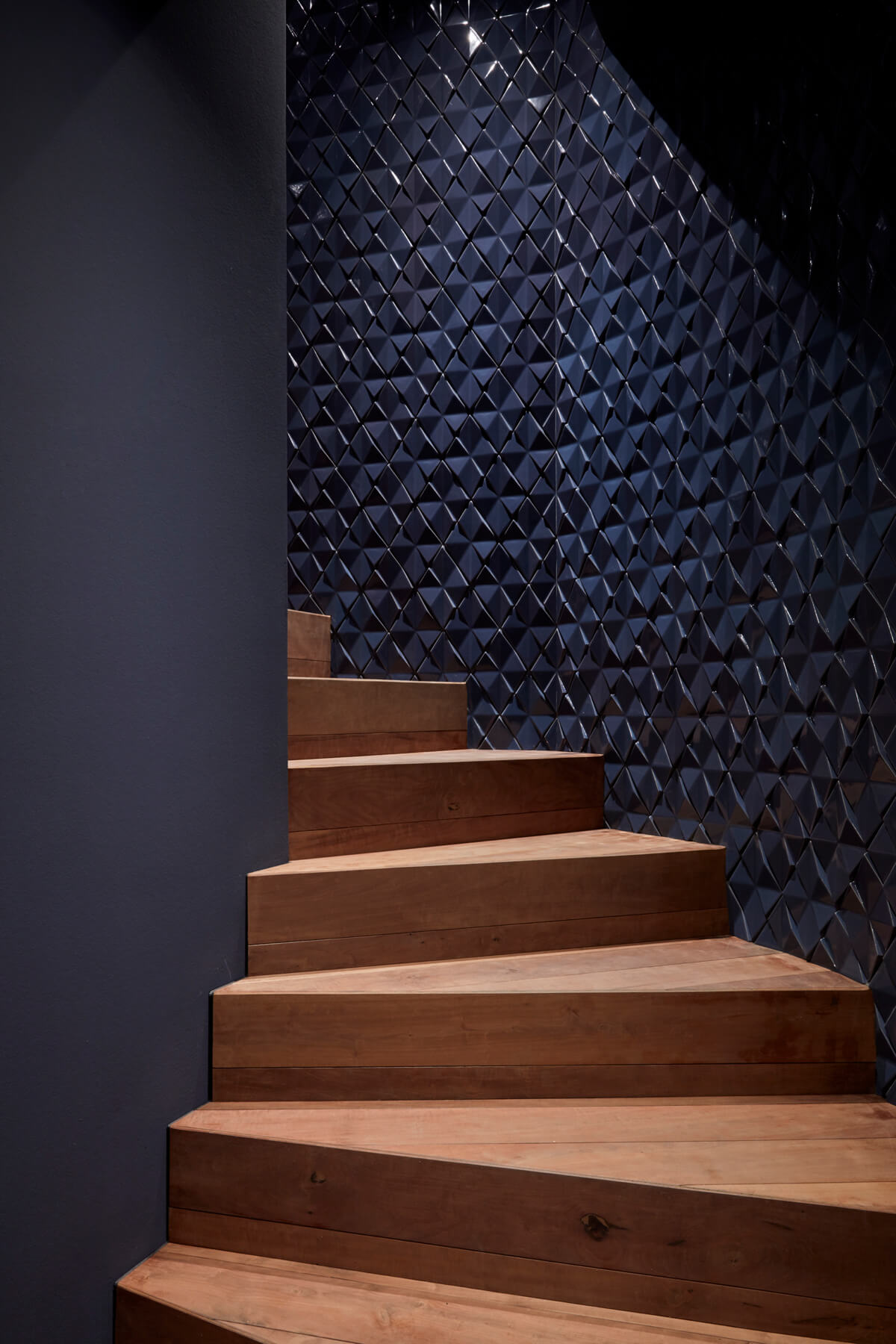 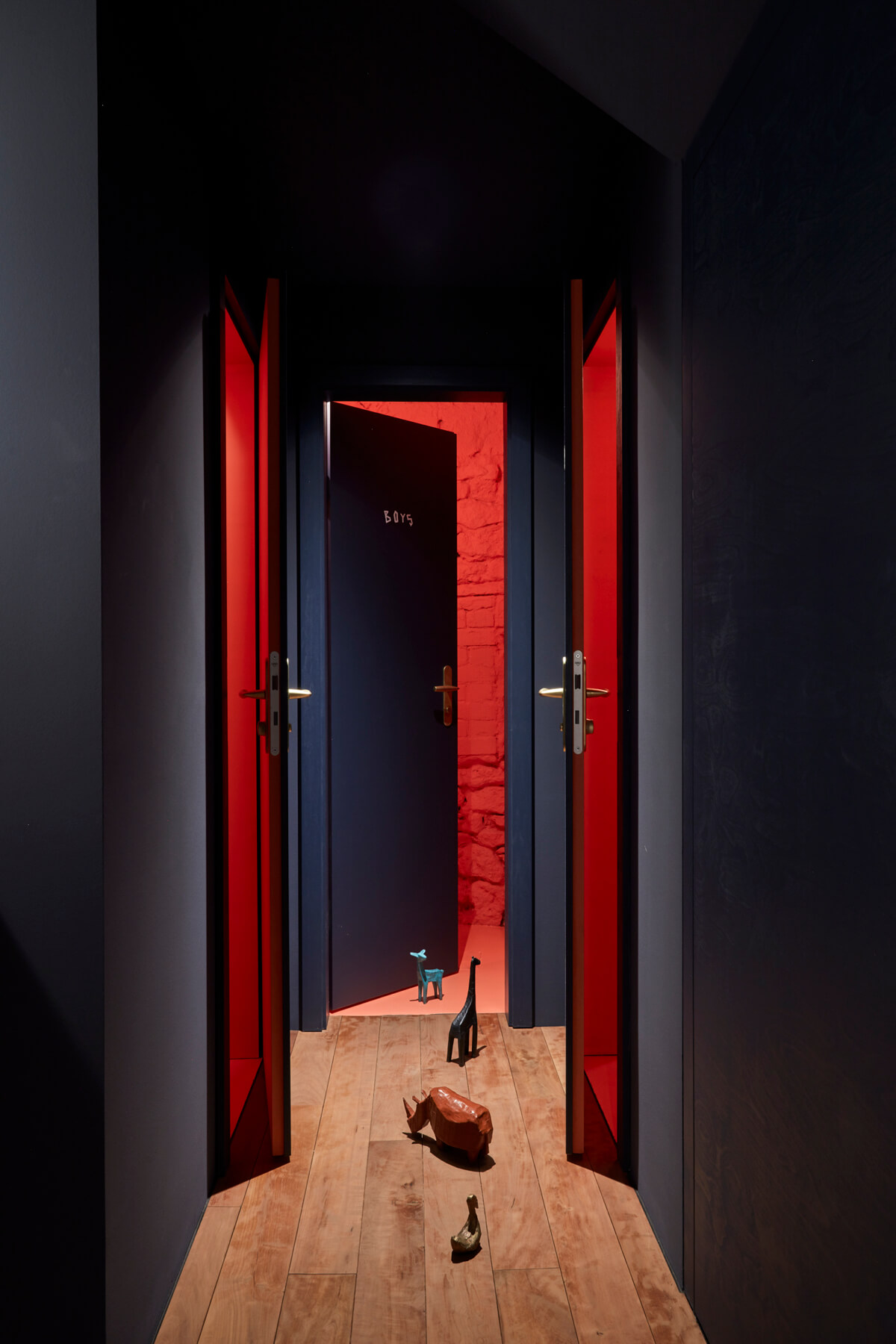 A similar strategy is employed on the facade of the Lindley Lindenberg, functioning to accent the “wunderkiste” (box of wonders in German) or towering aquarium-like facade that displays the hotel’s many shared public spaces to the street. 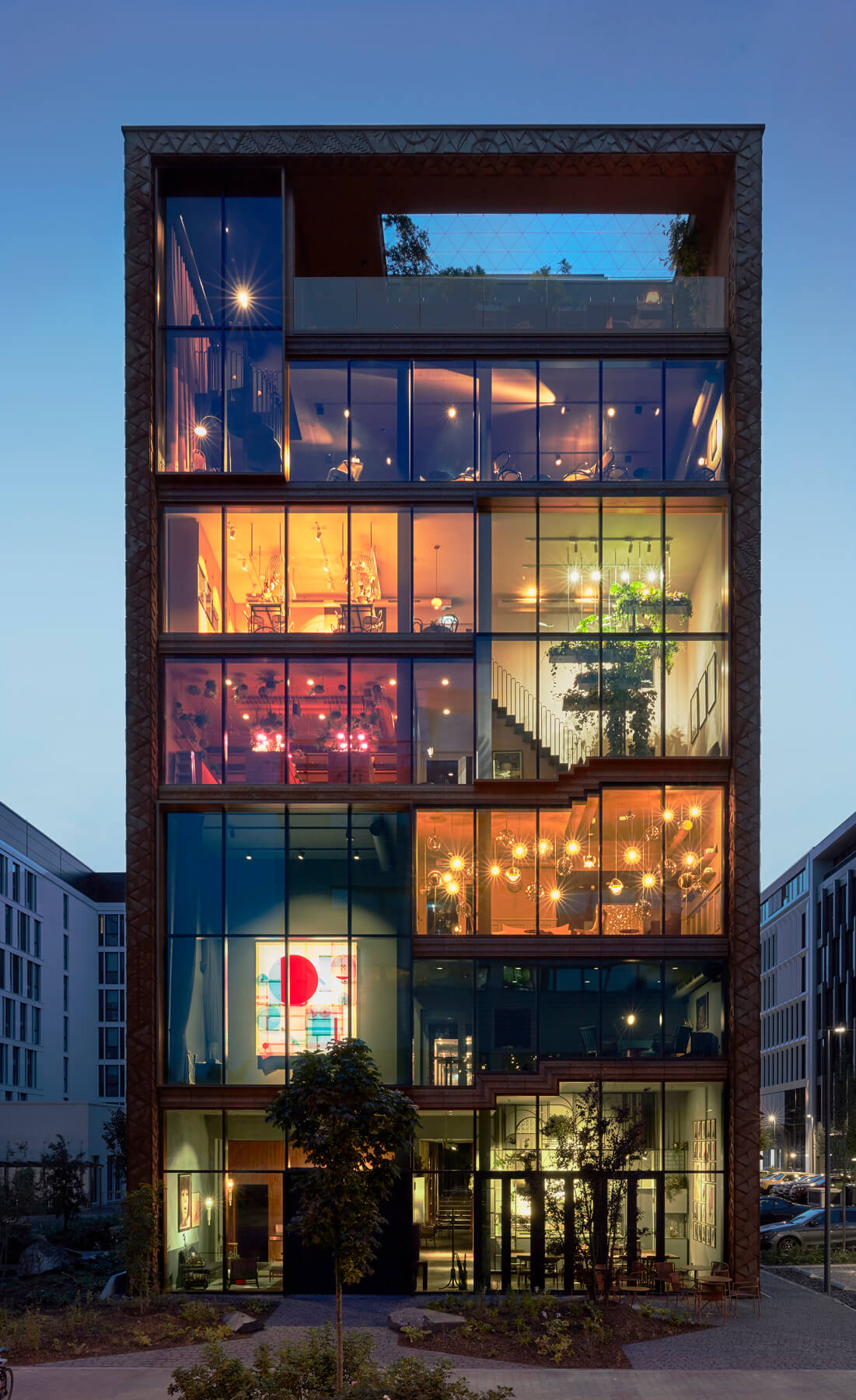 With 100 rooms nestled within, the seven-storey Lindley Lindenberg hotel prominently displays the shared amenity spaces on its glazed facade. 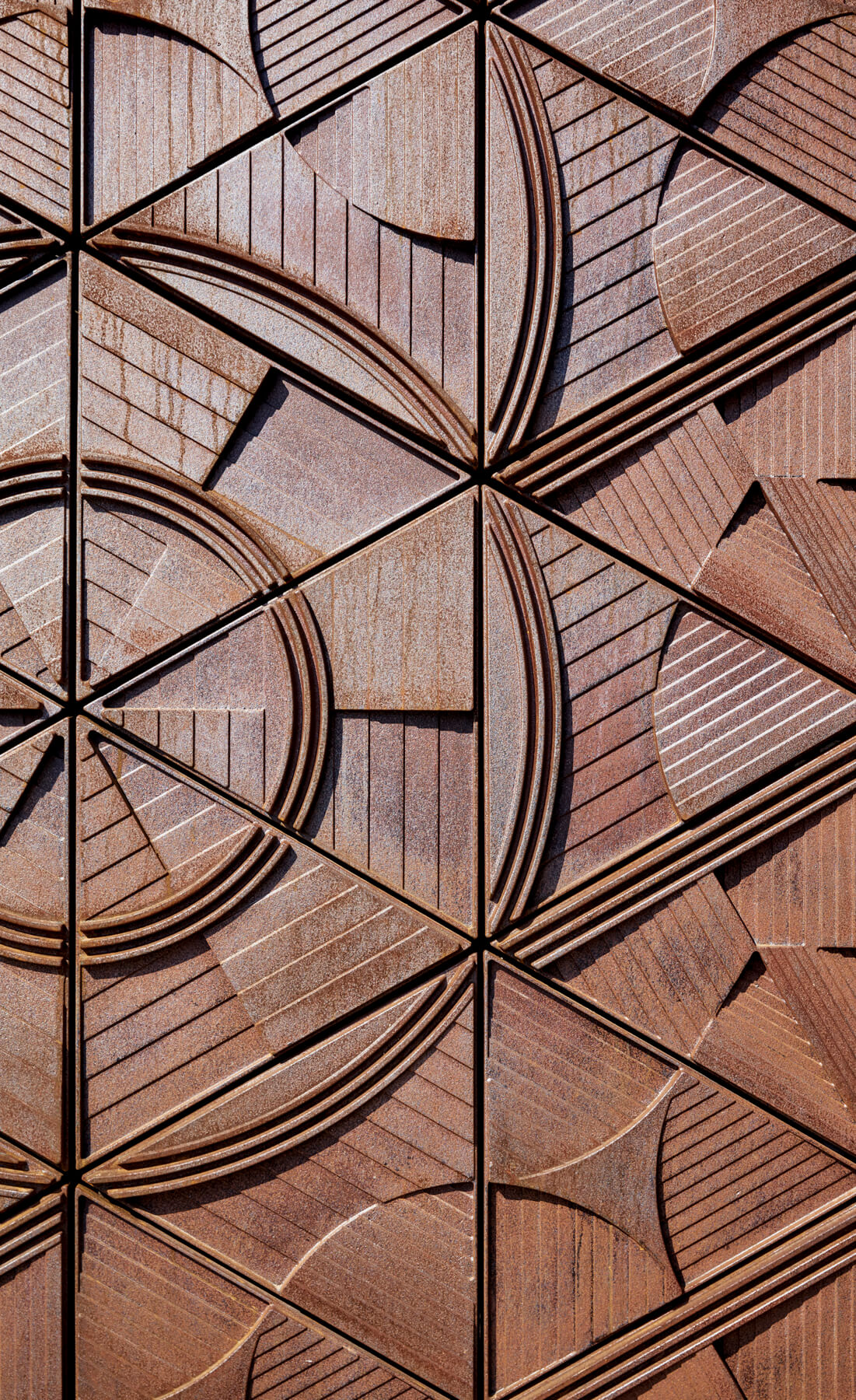 In collaboration with graphic designers Pixelgarten, the studio devised a unique pattern across 2,000 cast-iron tiles in nine triangular patterns (and each weighing 25 kilograms) that can each be rotated 120 or 270 degrees, always fitting together to maintain a consistent image. While also informing the charming details within, the facade’s 60-degree grid extends to the modest landscape that enlivens a corridor relegated by local building code for emergencies.

This playful use of geometry also defines the studio’s more humble projects — namely the spartan Mehlwassersalz bakery, where the design of custom tables allows for an incremental accommodation of the irregular, triangular-shaped footprint. Yet it’s a liberal use of colour, often in singular or tonal treatments, that truly distinguishes their interiors. 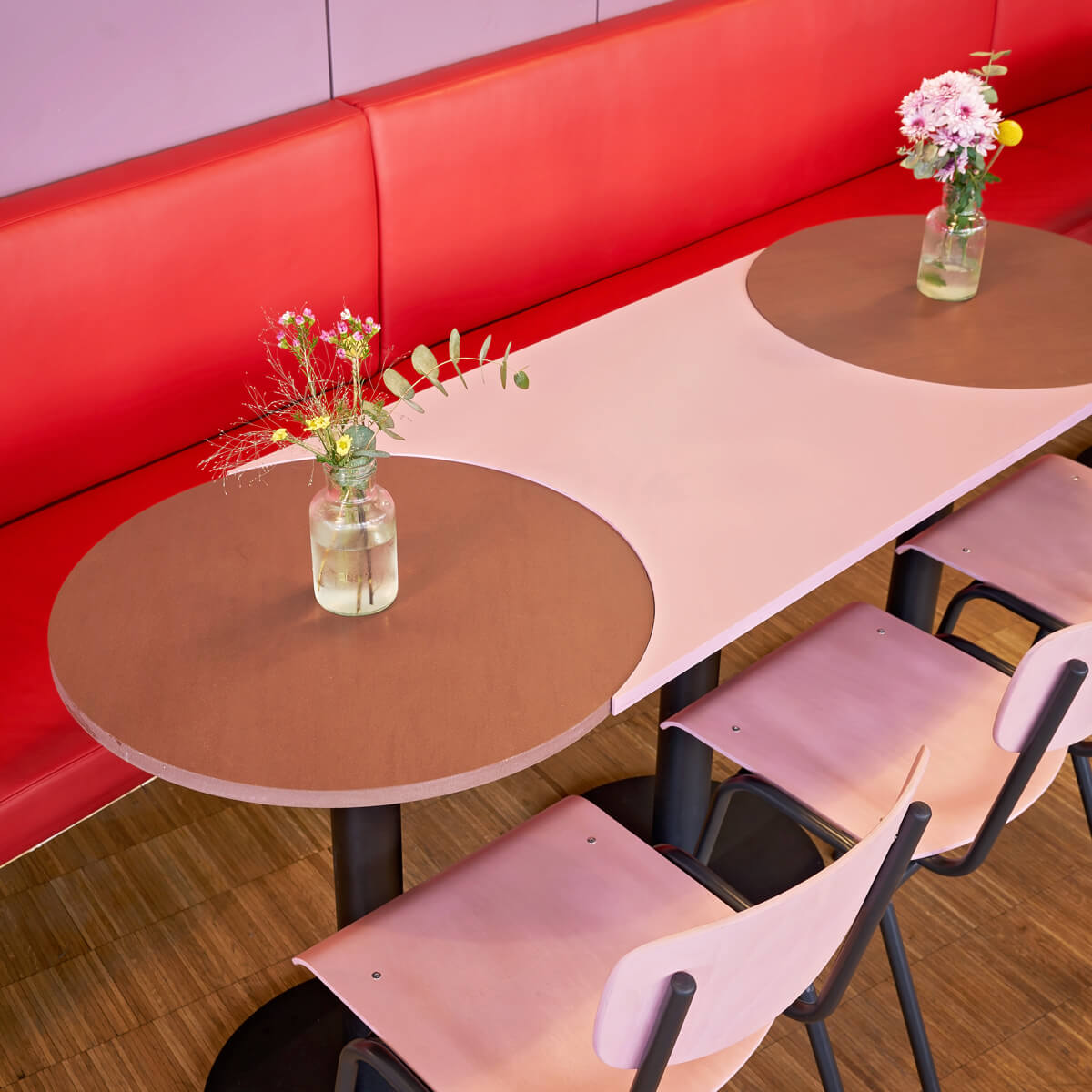 Tucked into the ground floor of Hans Hollein’s Frankfurt Museum of Modern Art, Mehlwassersalz bakery features custom stone-and-wood tables (comprised of a circle and intersecting rectangle), which line an existing banquette by the Austrian Postmodernist.

“When you look at standard American houses, you always see colours within the materials,” Heather says jokingly of such representations in film and television. “When you see homes in Frankfurt, they’re usually white.” It’s a condition the firm is eager to depart from. “The first time we really used colour was in Bonechina,” he recalls of the intense red lavatory that contrasts the “deep blue bar, with everything very calm and dark.” 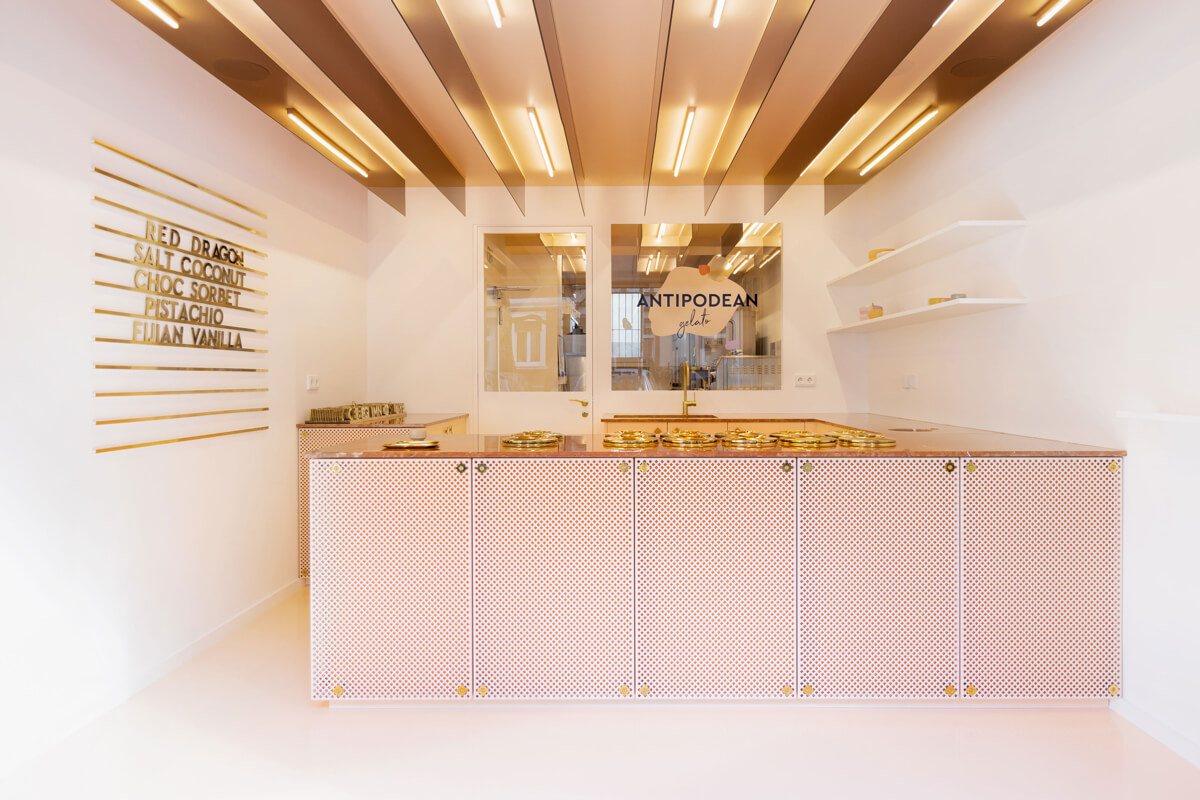 From the peachy tones of the Antipodean Gelato shop to the spectrum of hues used to demarcate the various programs in Lindley Lindenberg, their adventurous use of colour has become emblematic.

It also informs a number of current residential projects, among a host of new opportunities spurred by the momentum of the hotel’s opening that also includes another hospitality concept in the city. “I like the edginess,” Heather says of ABERJA’s approach. “Its unexpected, it’s a surprise.”

In Germany, Studio ABERJA is amassing a charming portfolio defined by pastel hues and geometric surfaces that mix digital production and artisanal precision.