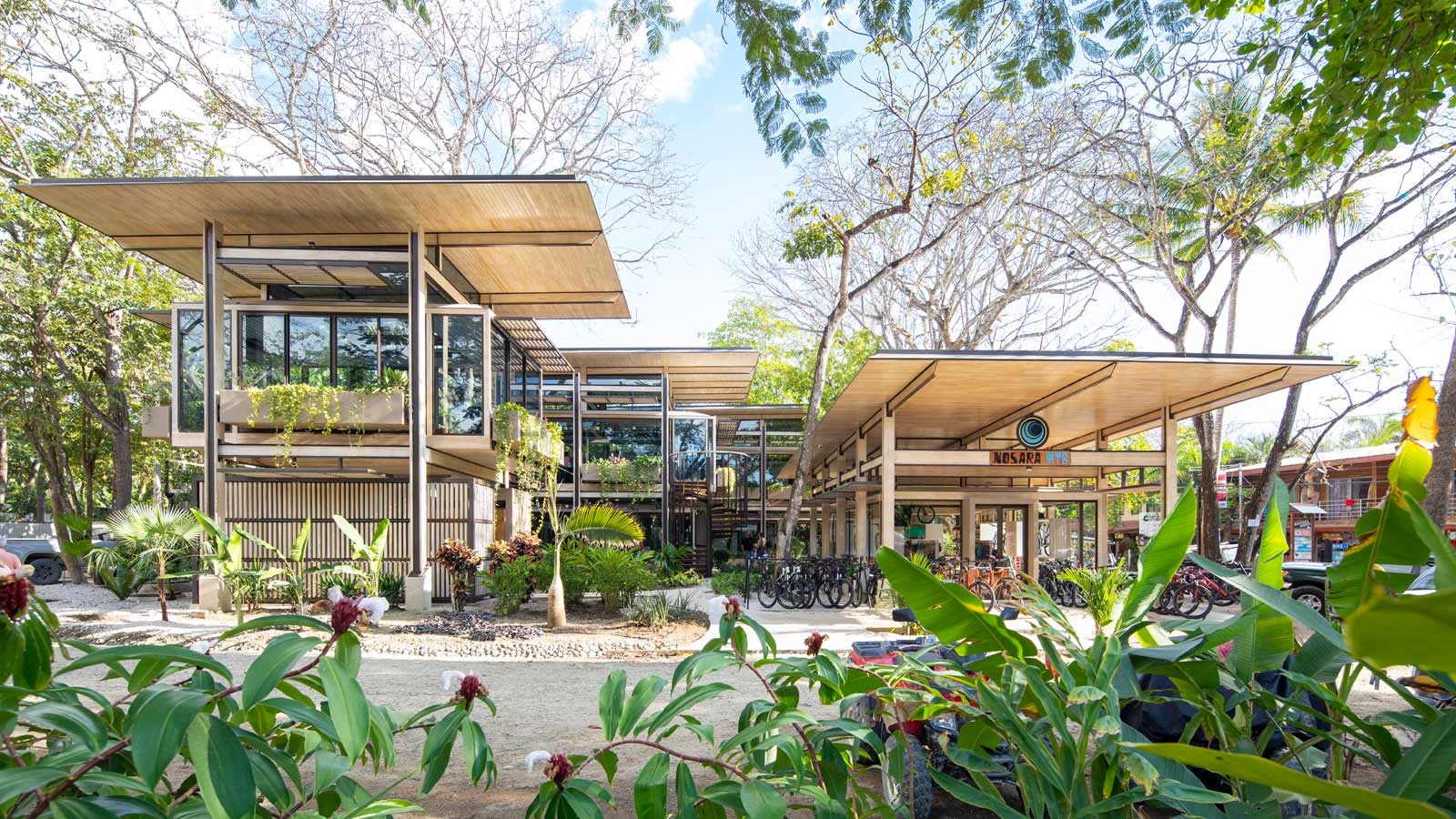 In Costa Rica, An Athletic Centre Enmeshed With Nature

At the Gilded Iguana, Studio Saxe has designed a verdant complex that builds on nature – instead of building over it.

Nosara isn’t your typical tourist town. The Costa Rican village on the banks of the Pacific Ocean is much better known as a hub of yoga and meditation – not to mention some of the world’s best surfing – than a raucous Spring Break destination. Reflecting the village’s bucolic character, Nosara’s Gilded Iguana Hotel is a retreat that reinforces a sense of tranquility, and a connection to nature, through its architecture, with the ethos best epitomized by the resort’s graceful yet striking new athletic centre.

For Costa Rica’s own Studio Saxe, the project offered an opportunity to refine a familiar aesthetic. As the designers of the Gilded Iguana’s guest rooms and communal spaces (completed in 2018), they saw the athletic centre as the next step in the resort’s evolution.

Situated on a plot central to both the hotel complex and the surrounding village, the two-storey, 615-square-metre centre parlays its prominent location into a community-hub presence. Combining guest athletic facilities with amenities that serve the broader Nosara community, the complex dissolves boundaries between indoor and outdoor spaces with similar grace.

While the bulk of the complex is devoted to athletic facilities – including a fully equipped gym and multi-purpose yoga and exercise studios – retailers line the lower level, creating a more communal, vibrant milieu.

Sheltered by the lightweight cantilevered roof and elegant brise soleils, the inner passageways flanking the athletic centre’s buildings are immersed in greenery, with vines also descending from the second-storey planters above. The result is a relaxed, fluid outdoor passageway that feels at once intimate and open, with ample seating inviting visitors and passersby to take in the ambiance. 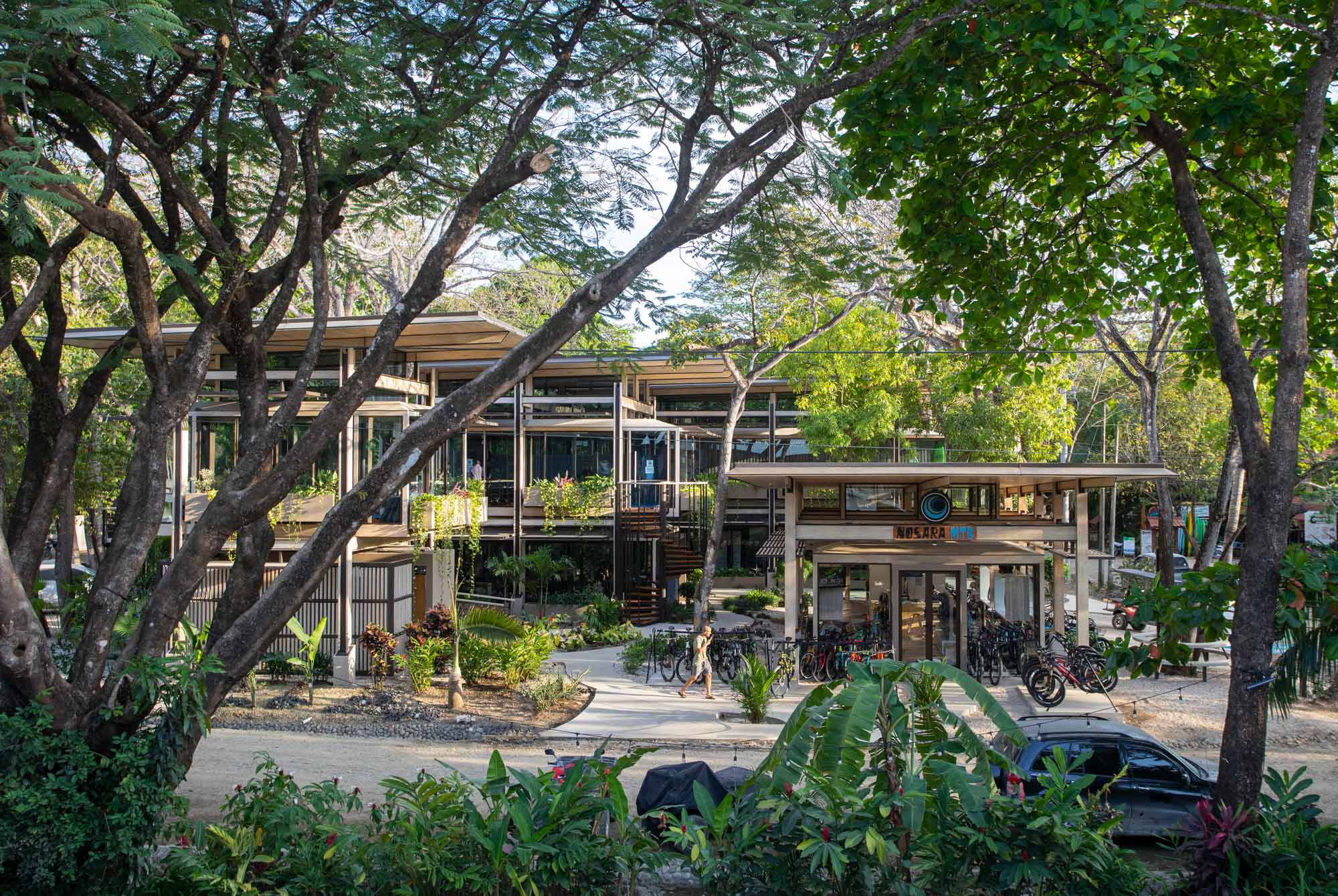 In an effort to preserve as much of the surrounding vegetation and habitat as possible, the architects adopted a modular construction process that allowed for relatively minimal disruption to the landscape. Favouring lightweight materials – glass and reclaimed teak wood supported by a minimal steel frame – and a massing model that breaks up the complex into a series of smaller buildings, they developed a staggered layout with an emphasis on preserving existing trees and their full root systems.

Studio Saxe’s considered design also incorporates significant energy-efficient features, including a rainwater collection system that harnesses water for local irrigation and mechanical systems. According to the designers, everything from “solar orientation, wind patterns, noise, dust, and other factors [were] considered in order to create efficient structures that work with minimal energy consumption.” 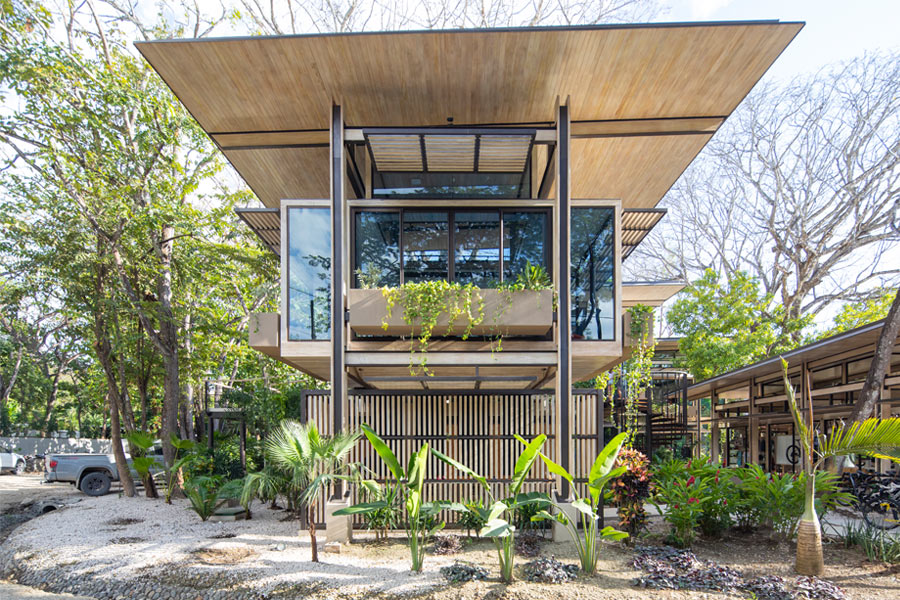 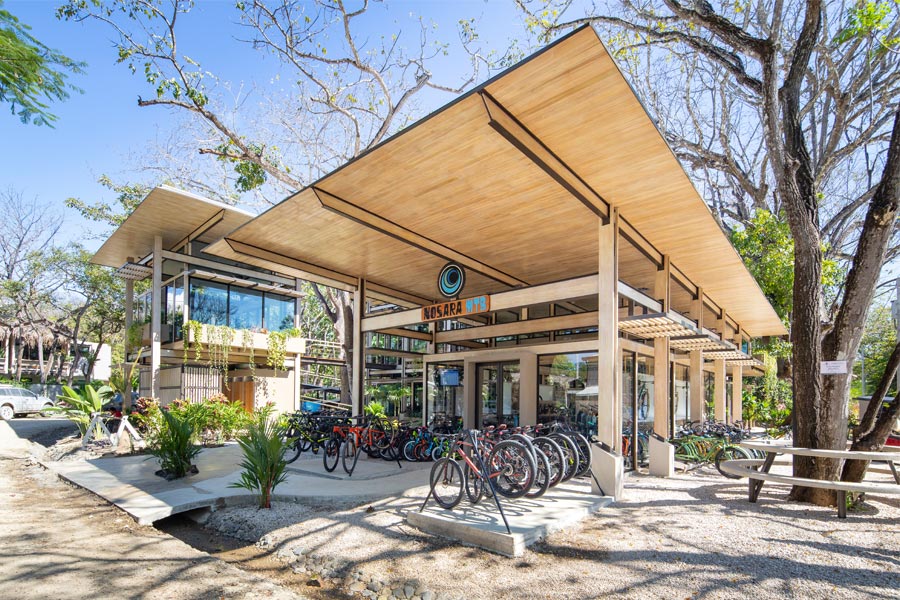 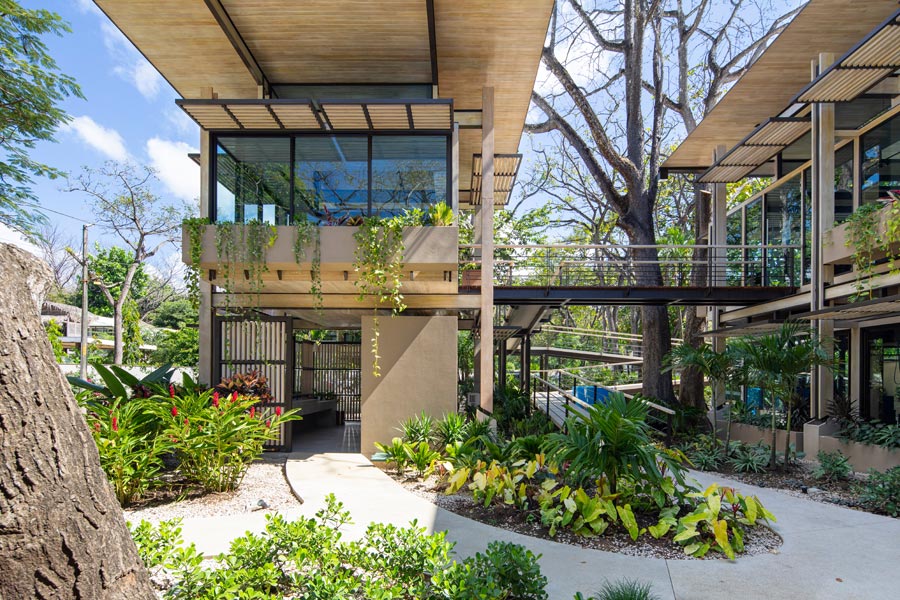 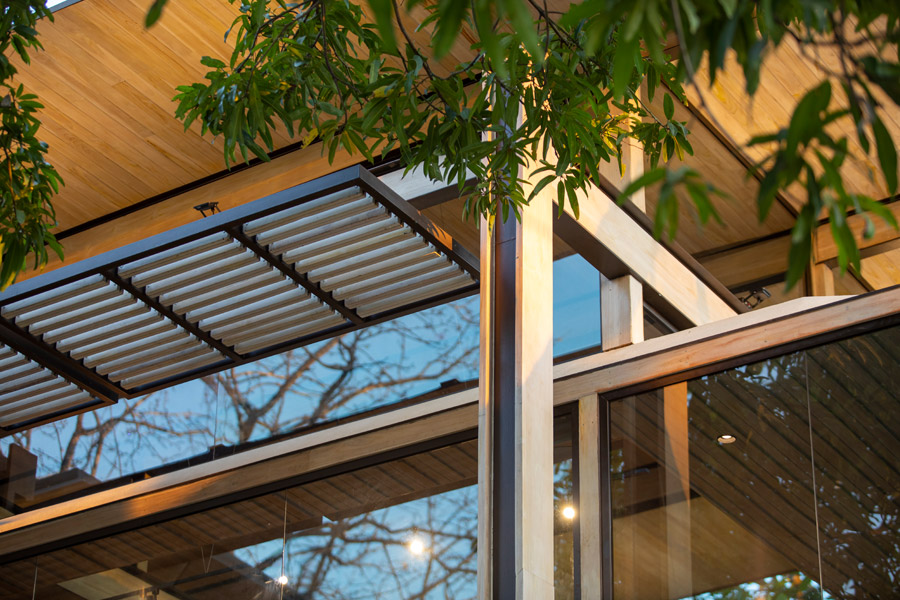 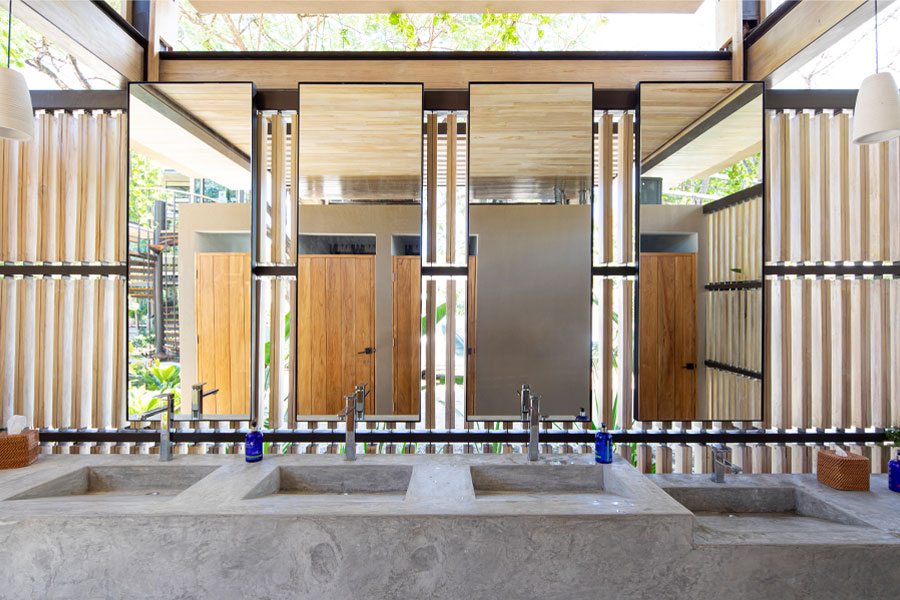 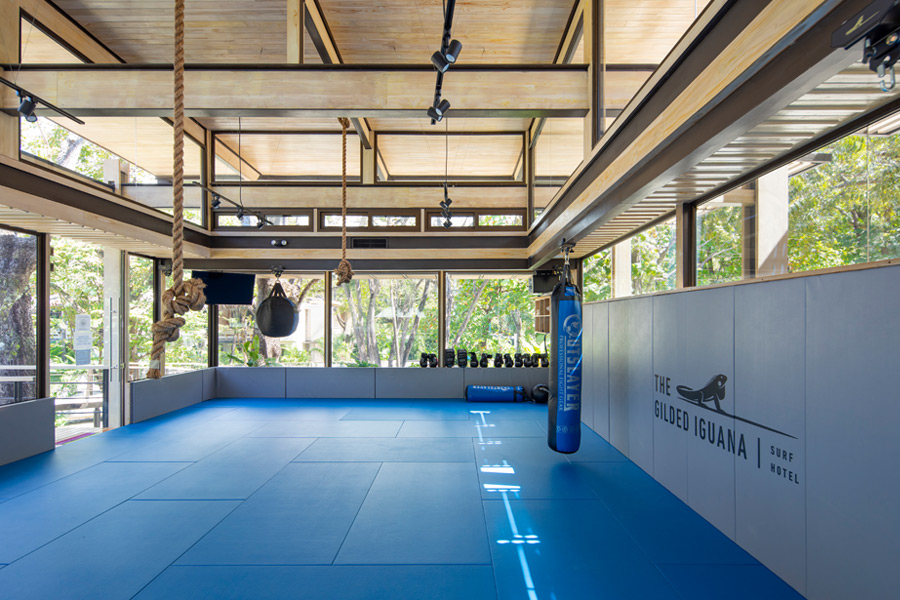 For Studio Saxe founder Benjamin Saxe, the athletic centre represents a distillation of the Gilded Iguana’s understated and environmentally sensitive approach to tourism. “The Gilded Iguana Hotel is designed as a harmonious ‘dialogue’ between the tropical identity of the past and a new toned-down, unpretentious and timeless tropical modernity that sits softly in the landscape and reflects the relaxed town atmosphere which most wish to preserve,” says Saxe. And not for nothing, it’s now also a pretty memorable place to get a workout.

At the Gilded Iguana, Studio Saxe has designed a verdant complex that builds on nature – instead of building over it.