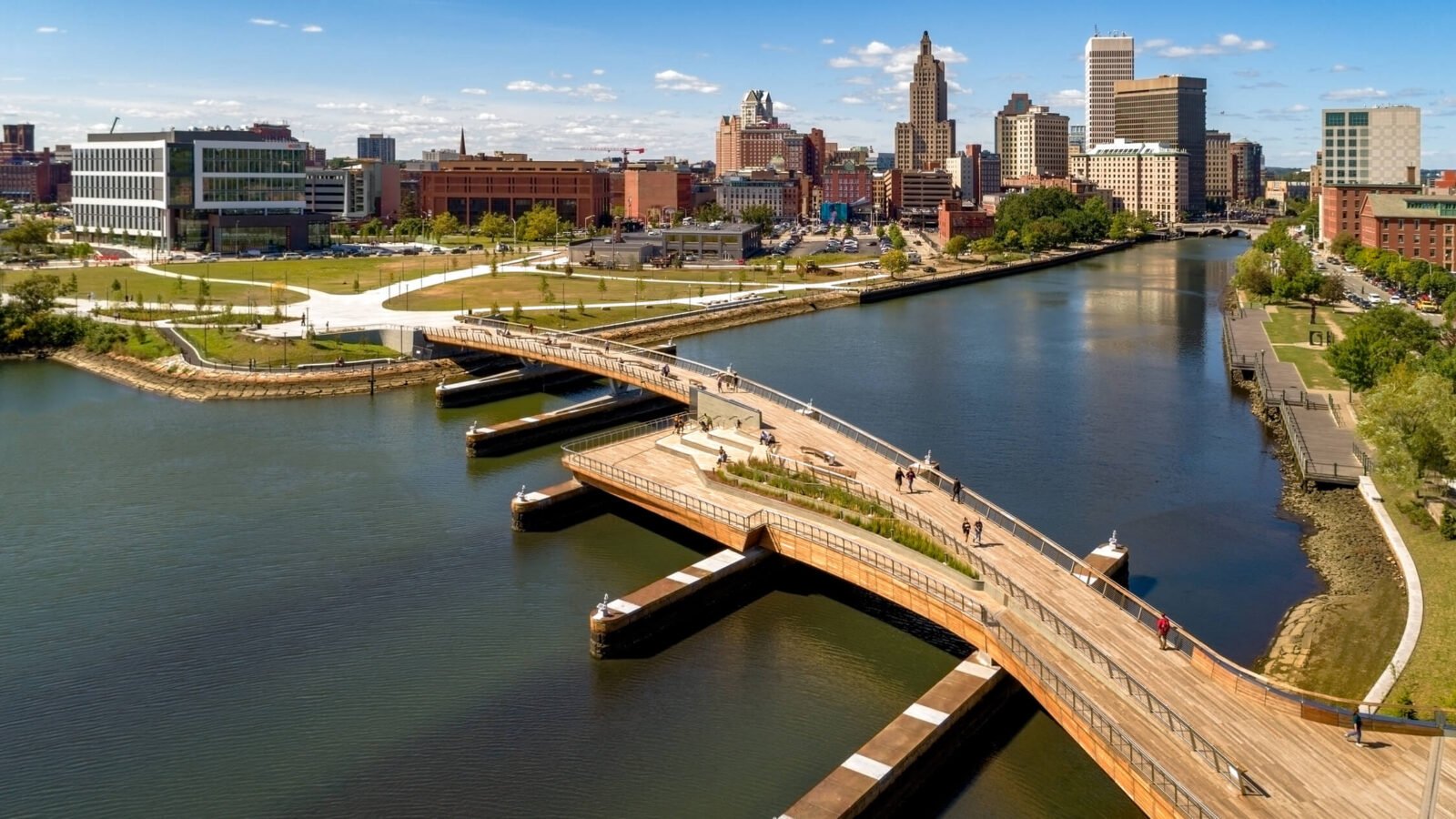 Rhode Island’s capital gets a striking and resilient piece of civic infrastructure courtesy of inFORM Studio and Buro Happold.

There is a nice symbolism to the siting and scope of the Providence River Pedestrian Bridge, completed last year in Rhode Island’s capital. Perched on granite piers that upheld a stretch of Interstate 195 before the highway was relocated in 2013, the curving 135-metre span not only joins up two new waterfront parks in previously unconnected neighbourhoods, but does so by replacing a car-centric piece of infrastructure with one focused on walkers and cyclists. 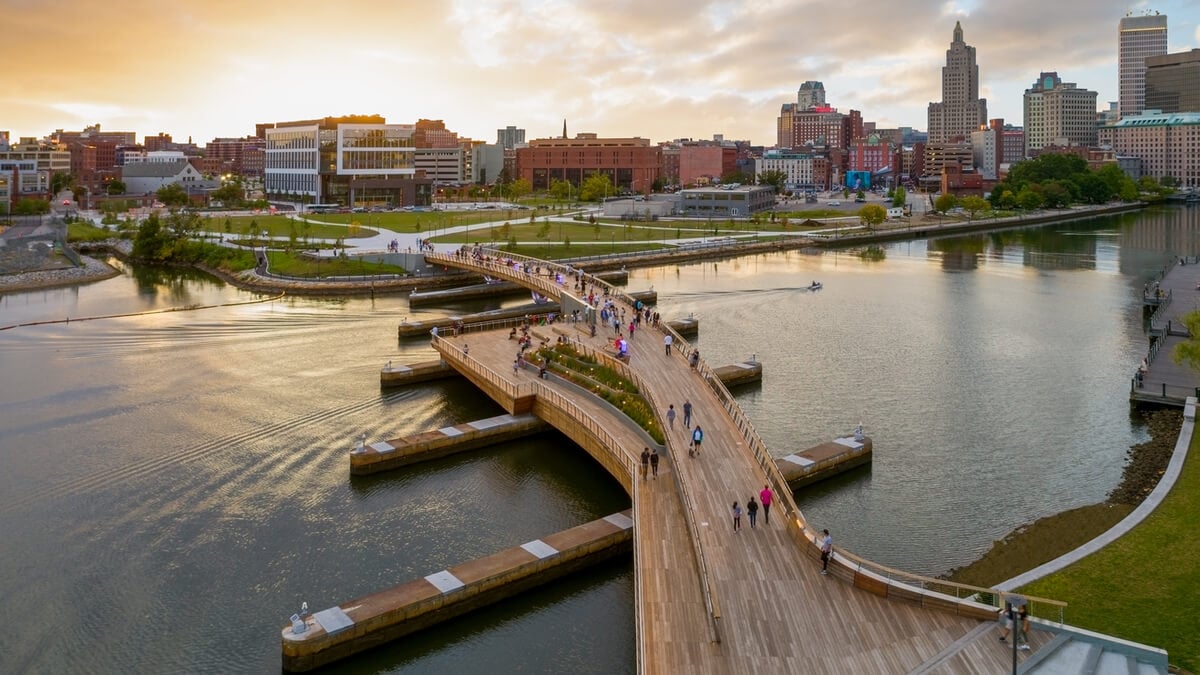 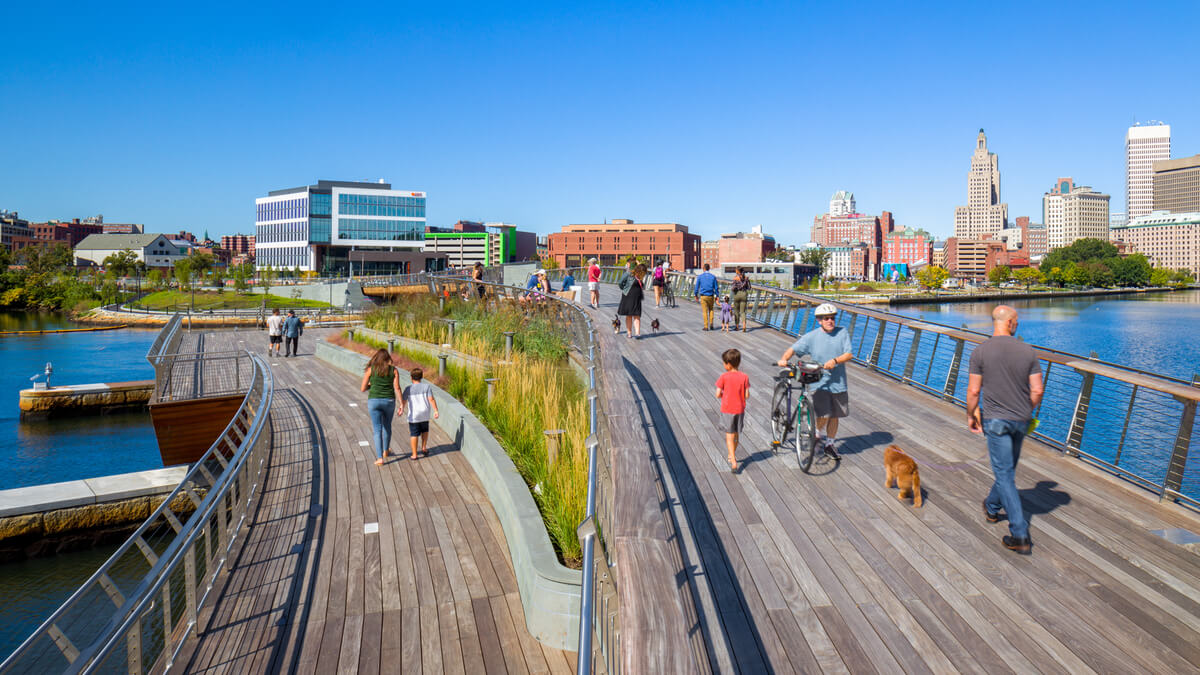 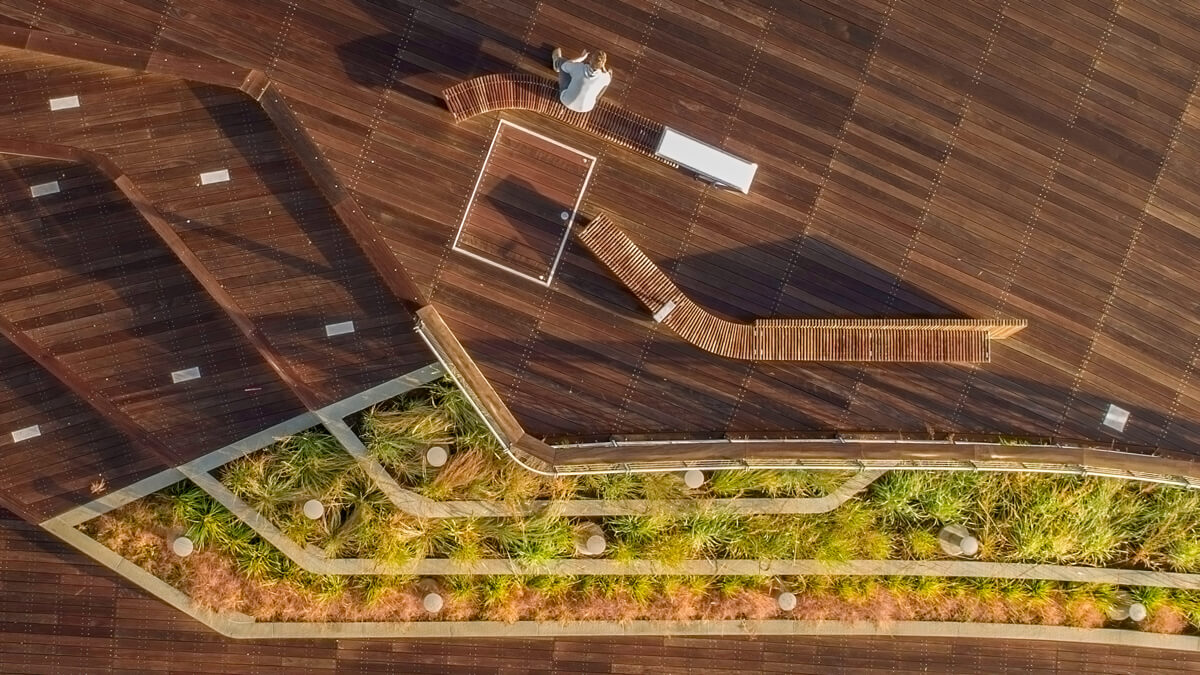 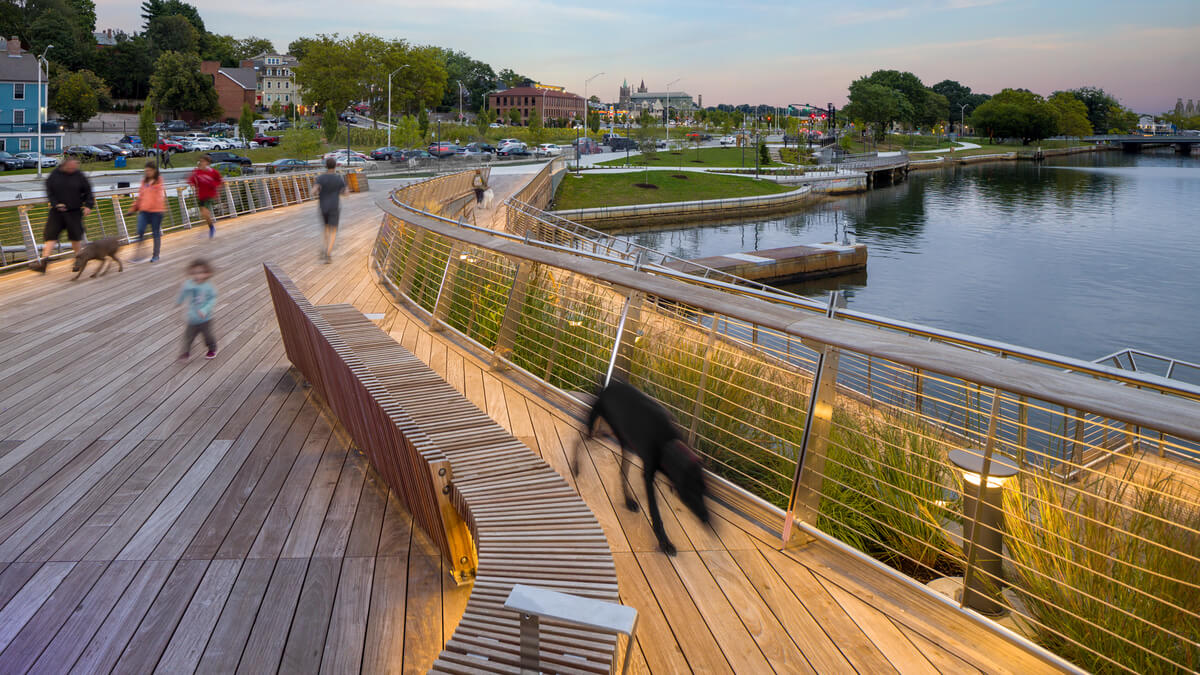 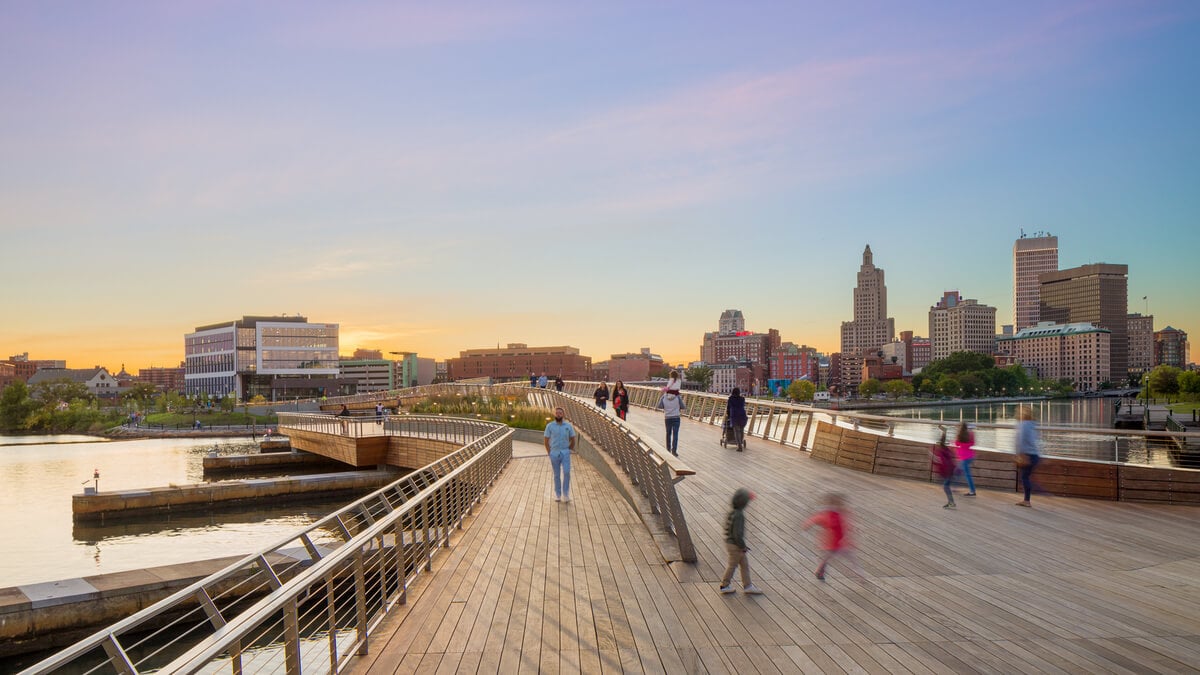 People- and eco-friendliness aside, it’s a striking addition to the cityscape to boot. As designed by Detroit-based inFORM Studio with the structural engineering firm Buro Happold, the east-west link is as graceful as it is robust, its pathway diverging on its eastern end and expanding at the centre into a terraced lower-level viewing platform outfitted with hearty plantings. 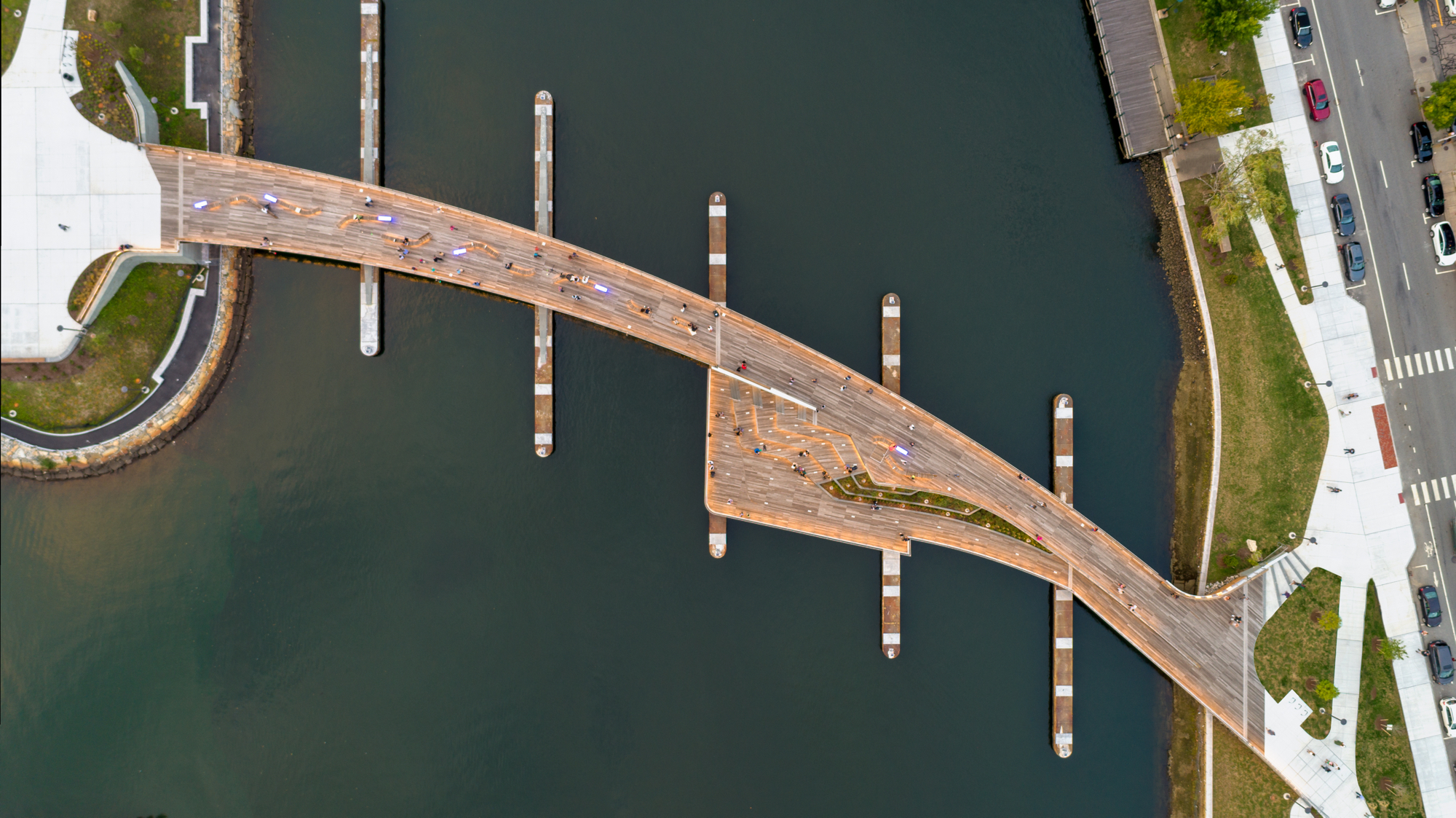 2At the centre of the bridge, terraced steps descend from the higher-traffic main path to a landscaped viewing and gathering spot.

3The granite piers of a relocated highway were built up with concrete by nearly half a metre in order to address projected sea-level rise.

According to Buro Happold, an initial design had to be revised to accommodate sea-level rise of up to nearly a metre. By augmenting the existing piers with concrete, the engineers were able to elevate the bridge, composed of a wood-clad steel frame and wood decking, “without altering our structural design too drastically.” The reconfigured span can also withstand any anticipated ice buildup.

For the citizens of Providence, the US$22-million structure, which took 10 years to execute, has proved a civic game changer, offering new vistas as they cross it, new spots in which to congregate and a sculptural new icon in the form of the span itself. 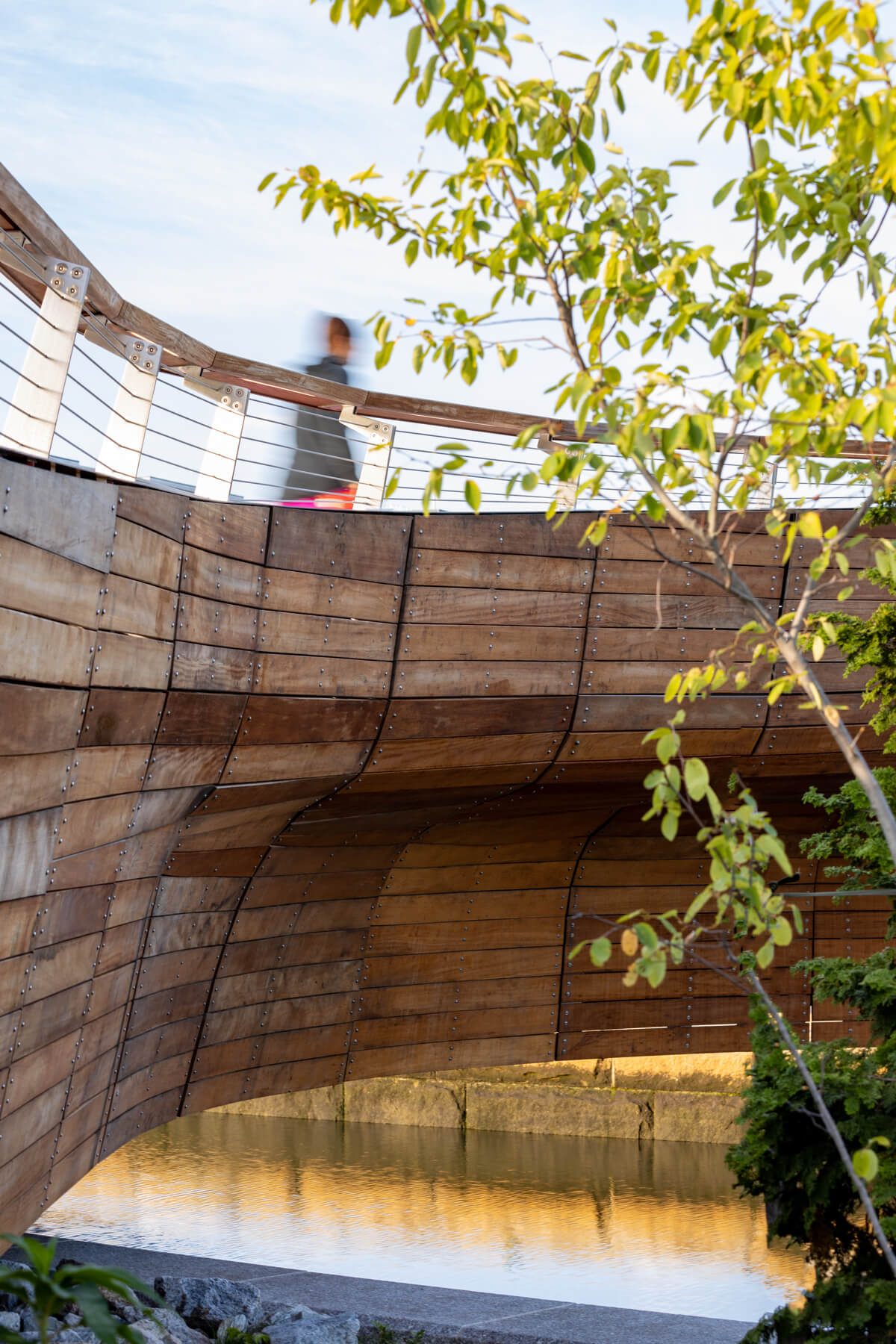 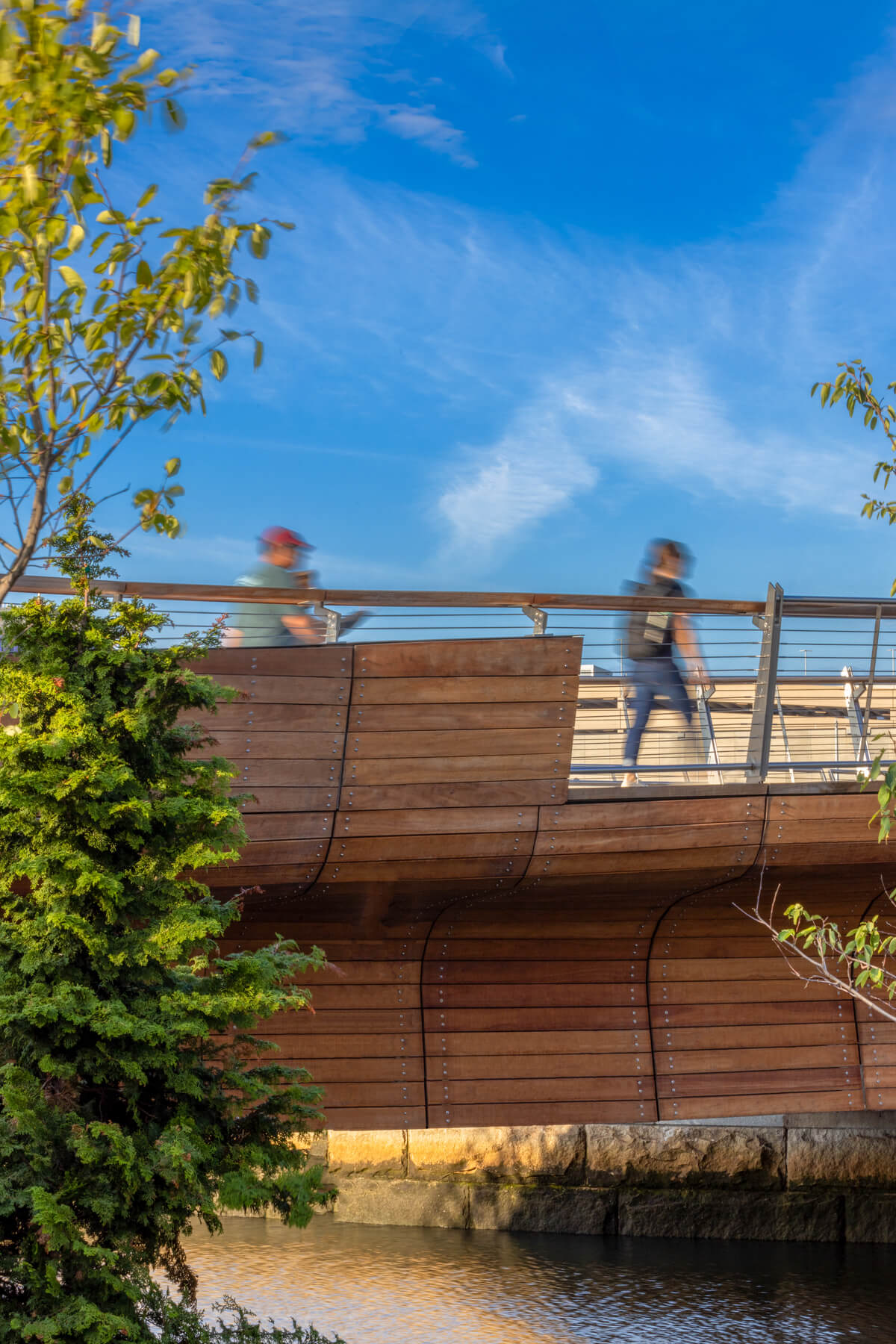 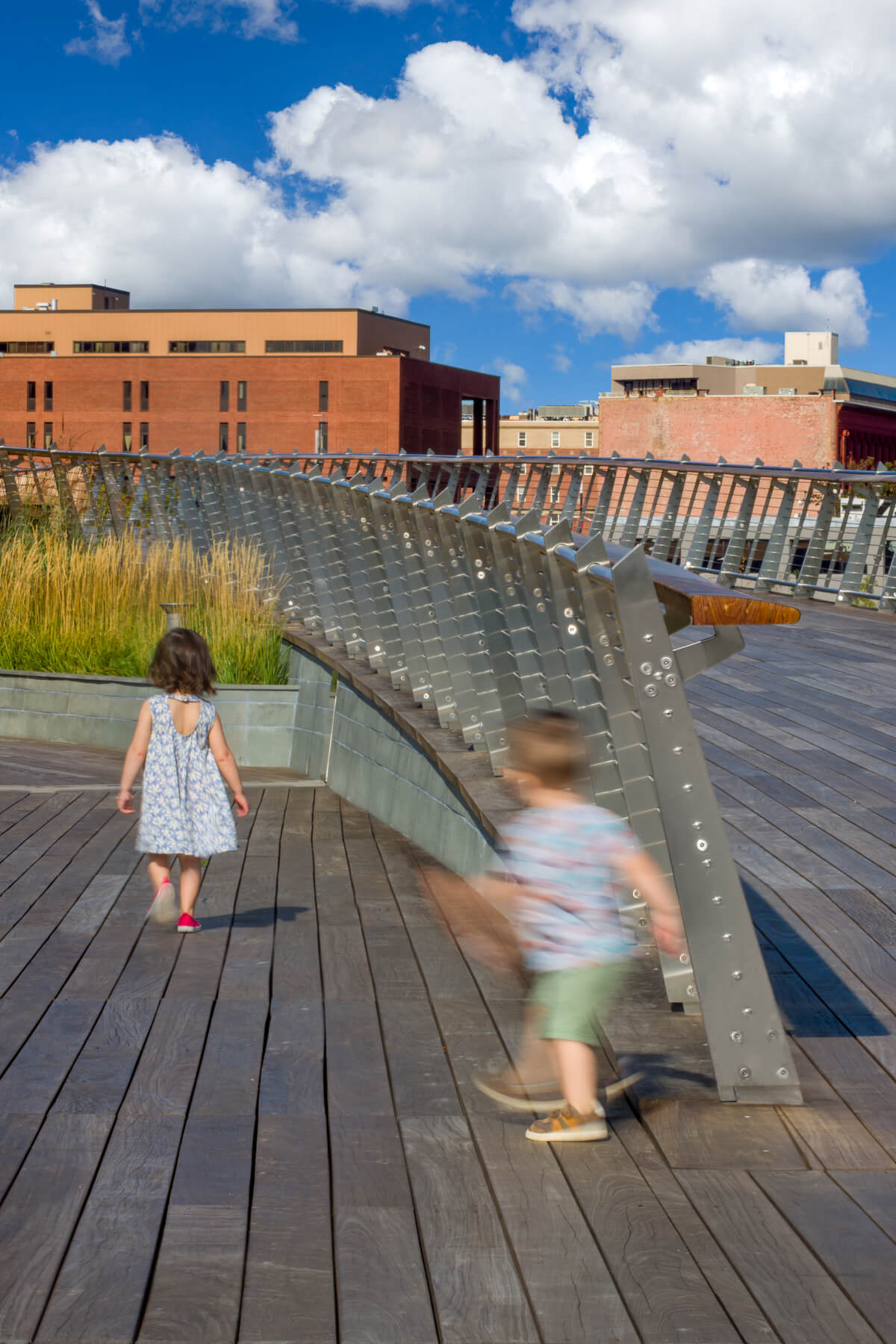 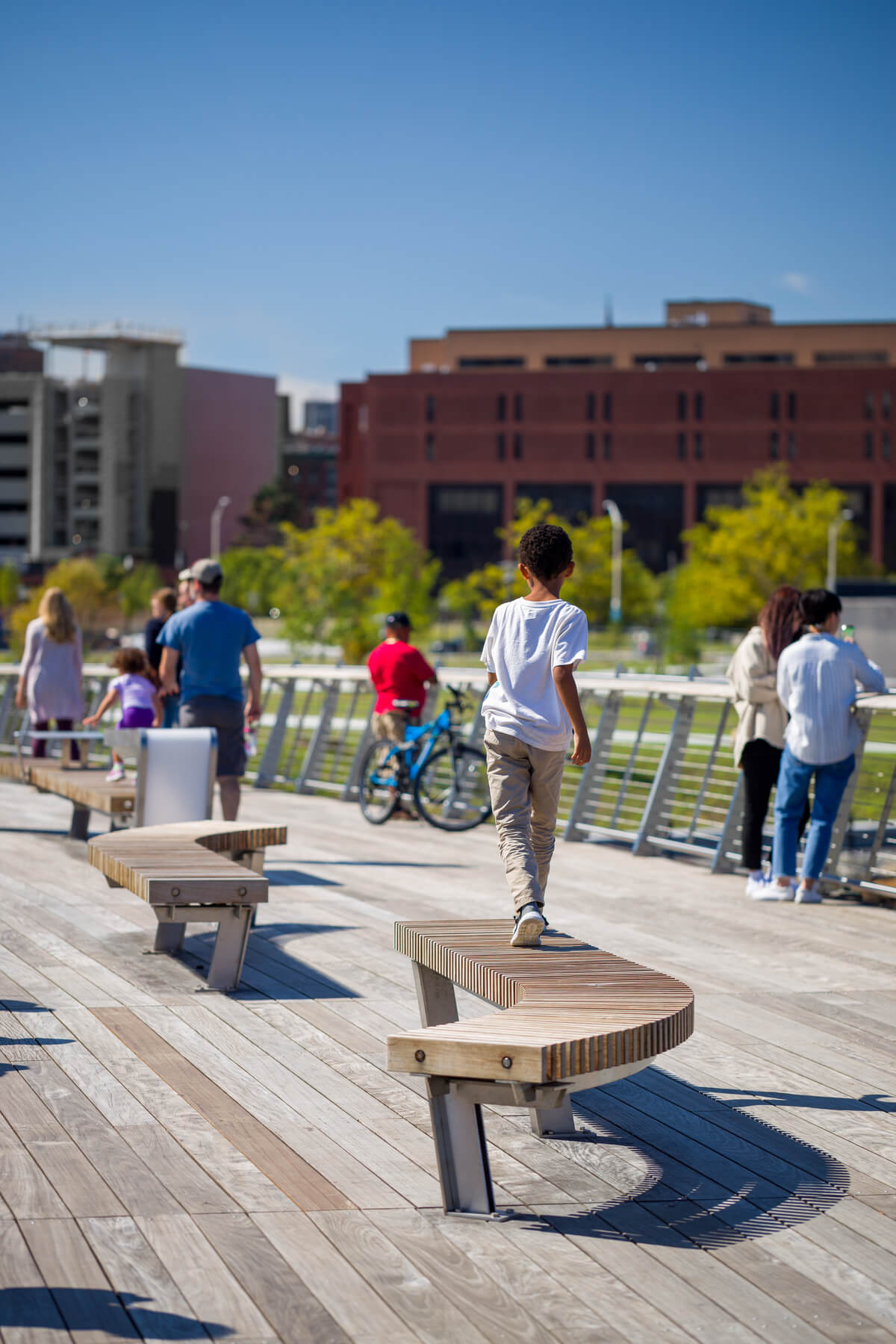 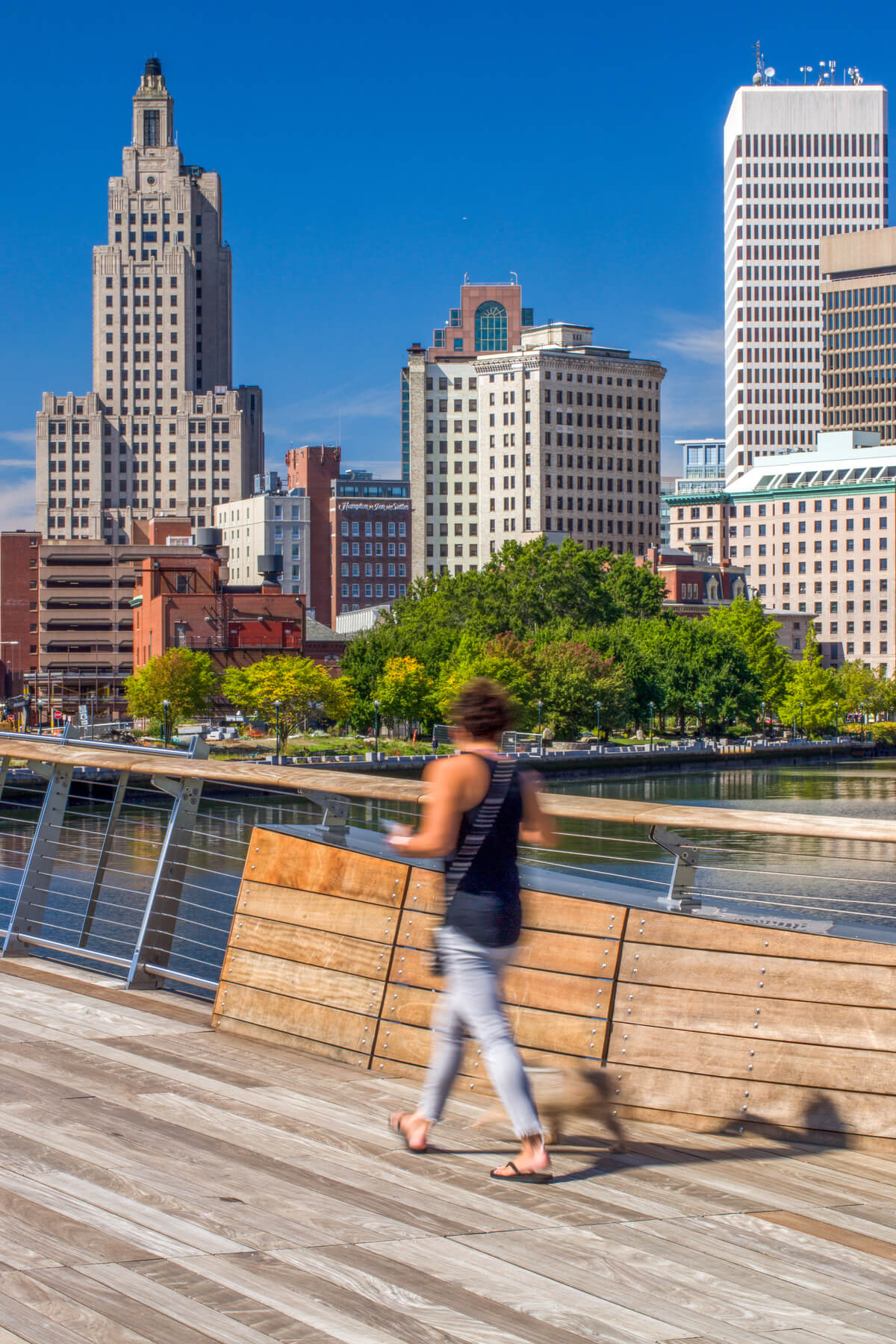 “The alignment of this urban intervention,” says Buro Happold, “simultaneously considers fluid movement through the city, orientation during the procession and frames of view toward the bridge as an artistic object.” Perhaps most crucially, it also serves as a worthy model for further waterside development, an ongoing project in the fast-evolving city.

Rhode Island’s capital gets a striking and resilient piece of civic infrastructure courtesy of inFORM Studio and Buro Happold.