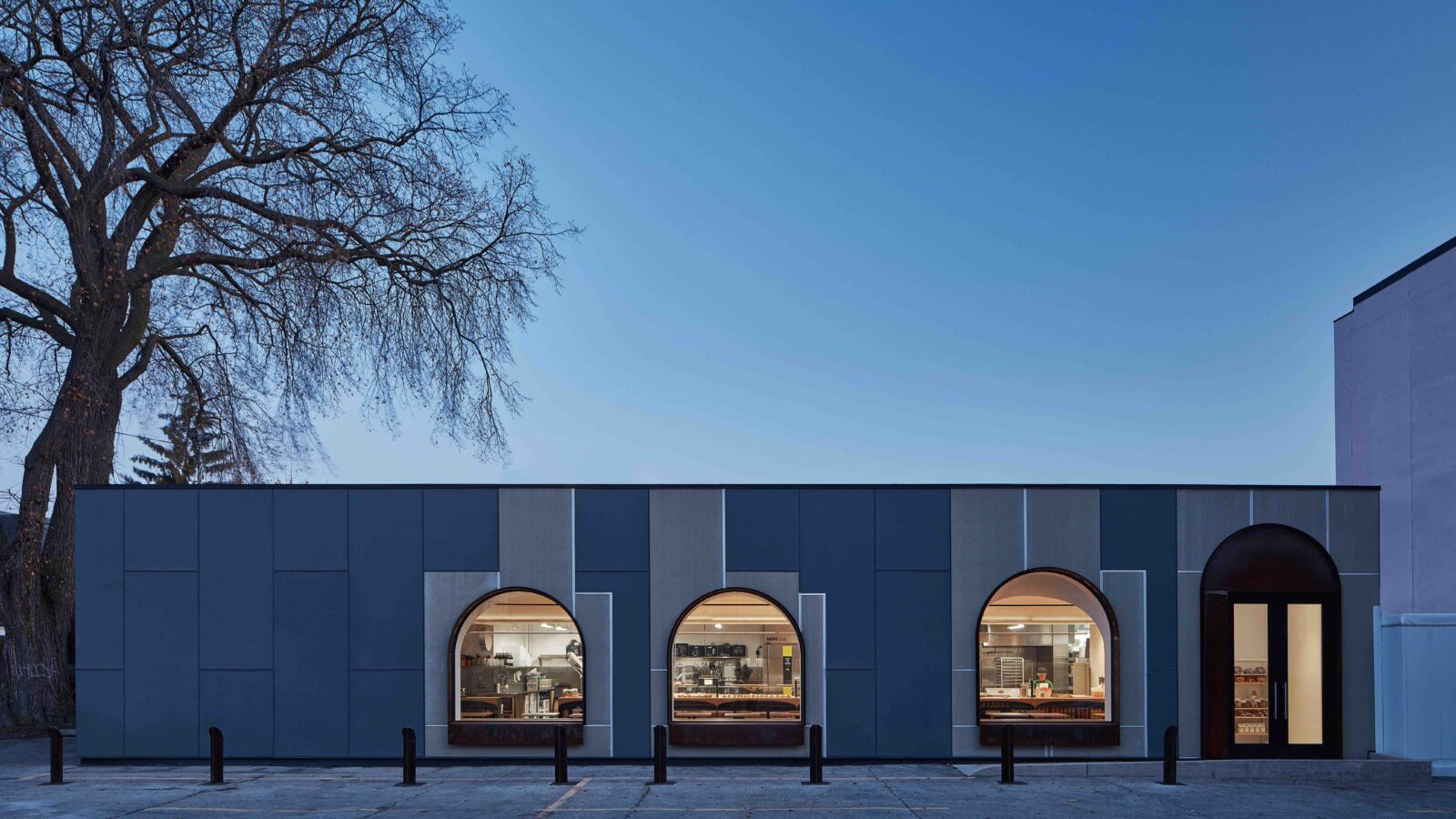 The Toronto bakery’s evolution symbolizes how unique coffee shops are vital hubs for both food and community.

On the relatively quiet strip of Queen Street West bordered by Shaw Street and Dovercourt Road (though the entire street, along with the rest of the city, has been eerily quiet over the past few months), there is a sharp dichotomy at play. The south side is home to the Centre for Addiction and Mental Health, which is undergoing a bold redevelopment on its 27 acres of land, while on the north side scrappy, independent businesses were holding on for dear life even before the coronavirus hit.

One of the establishments here is both old and new: Forno Cultura, the authentic Italian bakery with a local cult following, has taken up residence inside a former truck rental shop (which had also moonlighted as a condo-sales centre) fronted by a parking lot. The original skeleton has been transformed with steel cladding, while the openings that once featured roll-up garage doors have been repurposed to create the principal entrance and three large windows, reframed with raw-steel arches.

They allow customers to appreciate the changing face of Queen West, and for passersby to take in the action inside.

Forno was first established nearly seven years ago, in my neighbourhood of King West Village, by Andrea Mastrandrea – a trained architect hailing from a family of Italian bakers who set out to create a place in Toronto that would be more-than-just-a-bakery. And that is what it has become, offering expertly pulled espresso and artisanal breads but also serving as a place to visit, to run into neighbours, to have conversations. Mastrandrea had borrowed the model – and the recipes – from his Pugliese roots but situated his approach towards a contemporary vision.

He created the inaugural location by slowly transforming a basement print shop, deliberately retaining the factory’s industrial character but stripping it down and layering it with warmth. At first, there were the low, waist-height windows: Hunched over, curious passersby would peek in and see a team of artisans mixing carefully sourced ingredients into toothsome baked goods. The bakers would pull globs of dough and knead them into focaccia, pizza, cornetti. The aroma of coffee and dolci – amaretti, baci di dama, Italian shortbread – enticed the entire neighbourhood to step down into the place. Over time, a set of well-crafted benches were introduced to the sidewalk, followed by wooden foldable tables installed above the windows. These minimal additions gradually encouraged the patrons inside to spill out, further activating the street.

Long after the bakery’s inception, the back-of-house production remains on full display. This performative making-of-food is merely separated from the rest of the bakery by a glass wall. Narrow, elbow-height tables line the partition and provide patrons with just enough space to rest their food. Centremost are bar-like tables, none large enough to accommodate a laptop. This might be because the place itself demands attention: It is thoughtfully designed, but informal, open and welcoming – animated by the community. 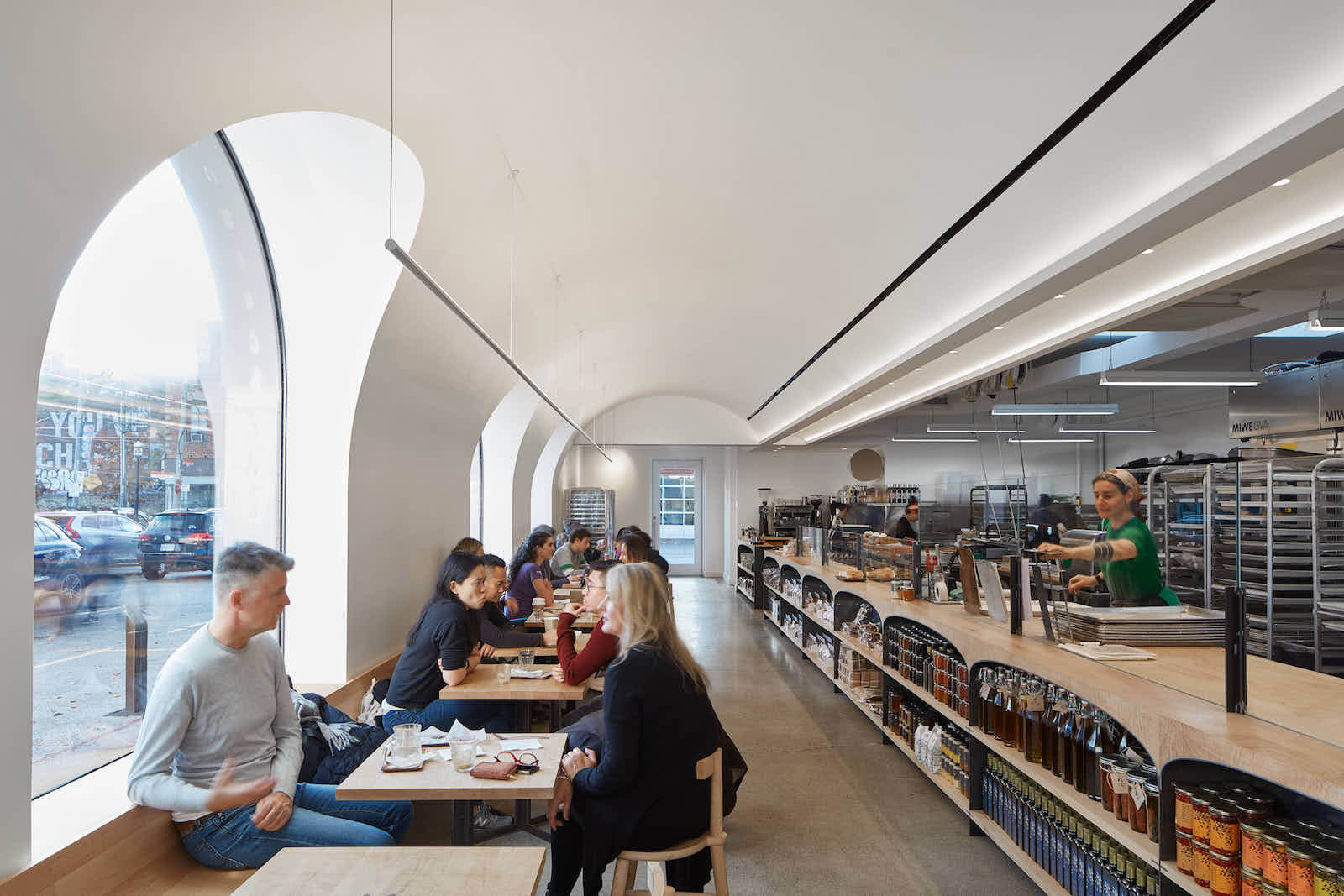 Forno Cultura cultivates conversation. On a Saturday some two years ago, a friend invited me there for coffee. As we descended the steps into the King West bakery, a group of familiar faces joyfully greeted us. This was their routine: Every weekend, these (mostly) architects – as well as artists, engineers, creative consultants – would convene at Forno to discuss the kind of sociopolitical topics most people are warned to stay away from at the dinner table: morality, gender equality, economic systems, the value of design. Soon, I joined the discourse. Over the years, we watched the bakery’s operation grow, feeding three more branches: at Union Station, First Canadian Place, and the Museum of Contemporary Art.

Amongst the group were Behnaz Assadi and Nima Javidi, the duo behind Toronto’s Ja Architecture Studio. Known for investigating the formal agency of architecture through their practice, they both also teach at the University of Toronto’s Daniels Faculty of Architecture, Landscape, and Design. Javidi also joins New York’s Cooper Union’s Irwin S. Chanin School of Architecture every week as an adjunct professor. The studio is recognized locally for award-winning residences such as The Octagon and Above the Fold and has made an international name for itself by submitting brave ideas to global architectural competitions including for the Bauhaus Museum in Dessau, the Helsinki Guggenheim and the Lima Art Museum expansion.

So, when it came time to plant the fifth branch on Queen, it only made sense that Mastrandrea would turn to Ja Architecture Studio. Assadi and Javidi had spent considerable time absorbing the DNA of this place, its pace and intent. More importantly, they understand that Forno was an evolving hub, alive and rooted in the varied histories of its neighbourhoods and informed by those very communities.

Here, akin to the King West location, the spatial composition connects the community to the process of food-making. When the 200-square-metre bakery opened in September 2019, the bustle within Forno was visible to the outside thanks to the generously sized sculpted windows that also brightened up the entire space. Shaped from hot-rolled steel, the arched frames – along with the four-metre-high exposed ceiling – recall the formal architectural gestures of eastern bazaars. These marketplaces feature lively corridors, activated on both sides of their arches, where the process of making is always on full display. Navigating them, huge crowds might hear braziers working on cuppers, see weavers behind looms and watch their food being prepared.

This is where Assadi and Javidi’s Iranian roots meet Mastrandrea’s Italian roots. And yet the new Forno also resembles a contemporary market hall, one that propels Queen Street West’s own particular culture forward. It is social, but precisely designed for patrons to move from east to west through its light-filled, double-height thoroughfare, traces of the old truck shop visible on the concrete floor below their feet.

The sculpted drywall was constructed to Ja’s exacting standards. The tables are custom and the chairs are by designer Katrina Tompkins.

As it is with the bakery’s edible offerings, craftsmanship was intrinsic to the interior elements. The vaulted ceiling, which augments the sense of depth in the narrow space, was only completed once it met Ja’s exacting standards. “It was done and demolished three times to get it perfectly executed,” says Assadi. On one side, delicacies such as amaretto biscotti and fresh focaccia are served across a counter, its low shelving accented by an arch motif, in front of a bustling, aroma-filled open kitchen. On the opposite side, a seamless built-in bench and clean-lined tables in maple, complemented by designer Katrina Tompkins’ ultra-minimalist chairs, round-out the space.

Prior to the shop’s temporary closing, Assadi and Javidi would return to this newest Forno Cultura each week with a rotating cohort of friends. Their longstanding devotion demonstrates how even the most compelling social nexus can emerge from the rawest of structures. It also signifies, at a time when independent street-facing eateries are struggling to stay alive, how vital these unique dining experiences are to the life of a city. During the pandemic, the Queen and King locations of Forno have remained opened for pick up as an essential business – and quietly awaiting the day patrons and great conversation can once again be welcomed in.

The Toronto bakery’s evolution symbolizes how unique coffee shops are vital hubs for both food and community.