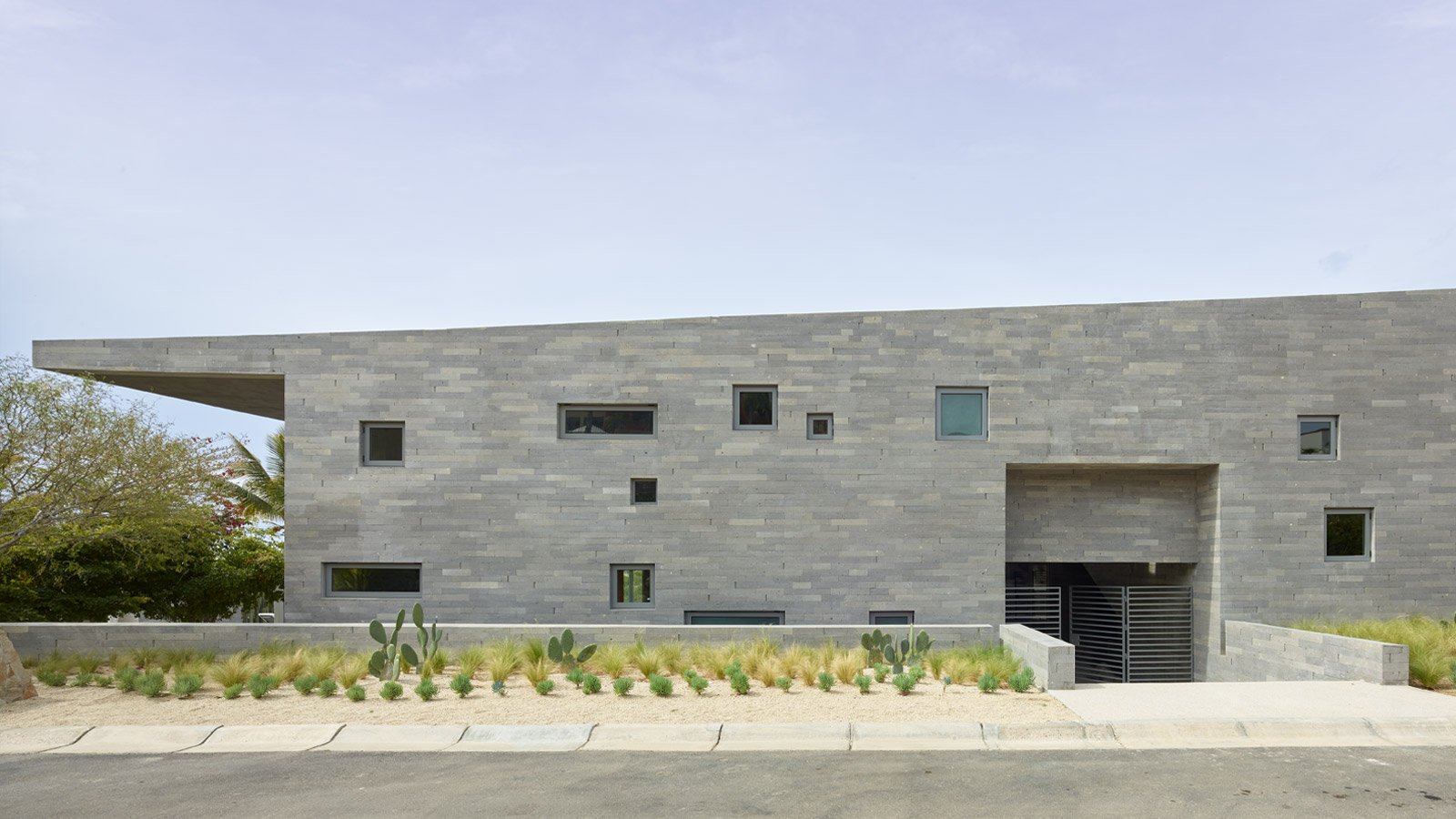 Besides being austerely beautiful, Casa Escondida by Studiohuerta is a model of both local know-how and fairer labour practices.

Gabriel Huerta, principal of the Brooklyn- and Tijuana-based design firm Studiohuerta, didn’t get into architecture just to build lavish retreats for the well-to-do. He has a decidedly humanist bent — and a portfolio that includes a postgraduate student centre at CETYS University in Mexico as well as conceptual designs for miniature green spaces to be situated on traffic medians in New York City. Currently, Huerta is enrolled in the Yale School of Architecture’s post-professional design research program, which focuses on socially engaged work.

“I want to move back and forth between architecture and academia,” he says, noting that he has already taken at least one break from professional practice to pursue intensive studies; in 2012, Huerta completed a degree program in environmental design at Spain’s Escuela Técnica Superior de Arquitectura de Madrid. “I believe that research is essential for the entire profession,” he says.

When a consortium of investors asked him to design a vacation home in Los Cabos, the Mexican former fishing village that has become a retreat destination for prosperous Americans, the architect — perhaps surprisingly — accepted. True, the commission wasn’t obviously public-spirited in nature. But the project, he decided, could be a kind of laboratory — a chance to establish best practices for future work and to test out ideas about aesthetics, labour relations and spatializing technical and environmental systems such as passive cooling. In short, the commission afforded him an opportunity to do the thing he loves most: research. 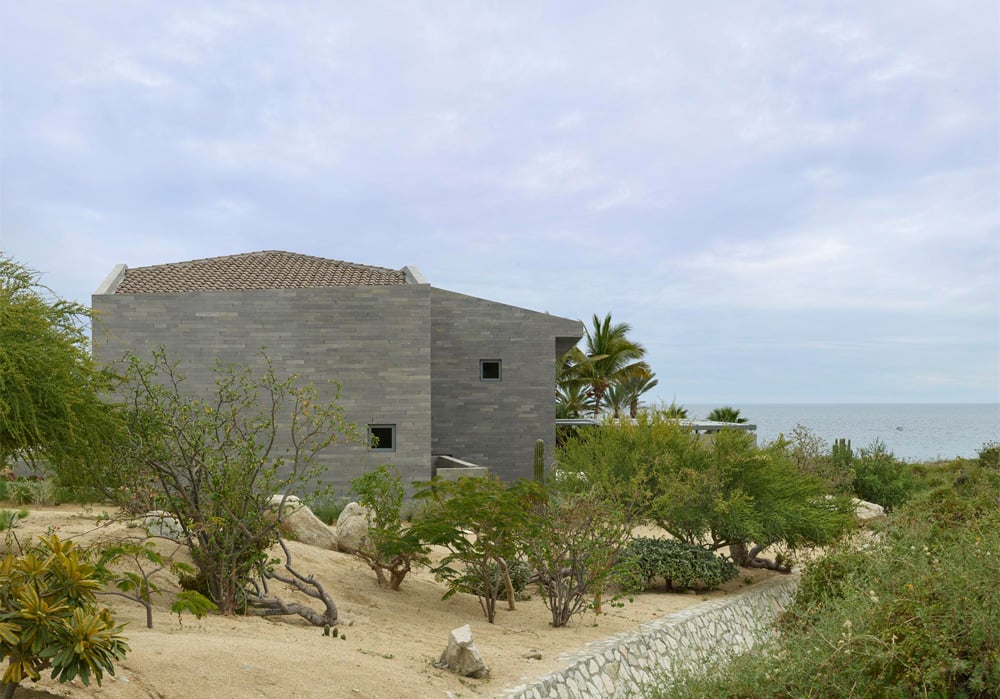 Casa Escondida is situated in a “surreal” landscape of scrubby desert with a view of the Pacific.

It also enabled him to build in a truly surreal environment, a landscape of scrubby desert that suddenly gives way to the Pacific. Huerta is no stranger to the Baja California peninsula, at the tip of which Los Cabos sits. He was born in its largest metropolitan area, Tijuana, and spent the first decade of his life moving back and forth between his hometown and its twin city on the American side of the border, San Diego.

Since his childhood, Huerta has seen dramatic changes in the local economy. Medical tourism has brought U.S. dollars pouring into the peninsula, and rising home prices have sent Americans southward in search of affordable properties. The result is a construction boom that isn’t often subjected to burdensome regulation. “Baja California is a great place to work,” he says, “because there’s a measure of freedom in how you approach each project.”

The architect committed himself to using that freedom responsibly. “I was trying to resist as much as possible the larger culture of vacation development,” he says, referring obliquely to the typical Baja Californian holiday home: an ersatz Tuscan villa surrounded by palm trees, which don’t naturally grow in the arid climate. Instead, Huerta tapped into the Central American tradition of concrete construction. The house he designed, called Casa Escondida, is a low-slung mass, austere like the surrounding landscape, and clad in flinty Cantera, a soft stone from the heart of the country. The property, moreover, is adorned with local plant species, such as feathergrass, succulents and black olive trees. 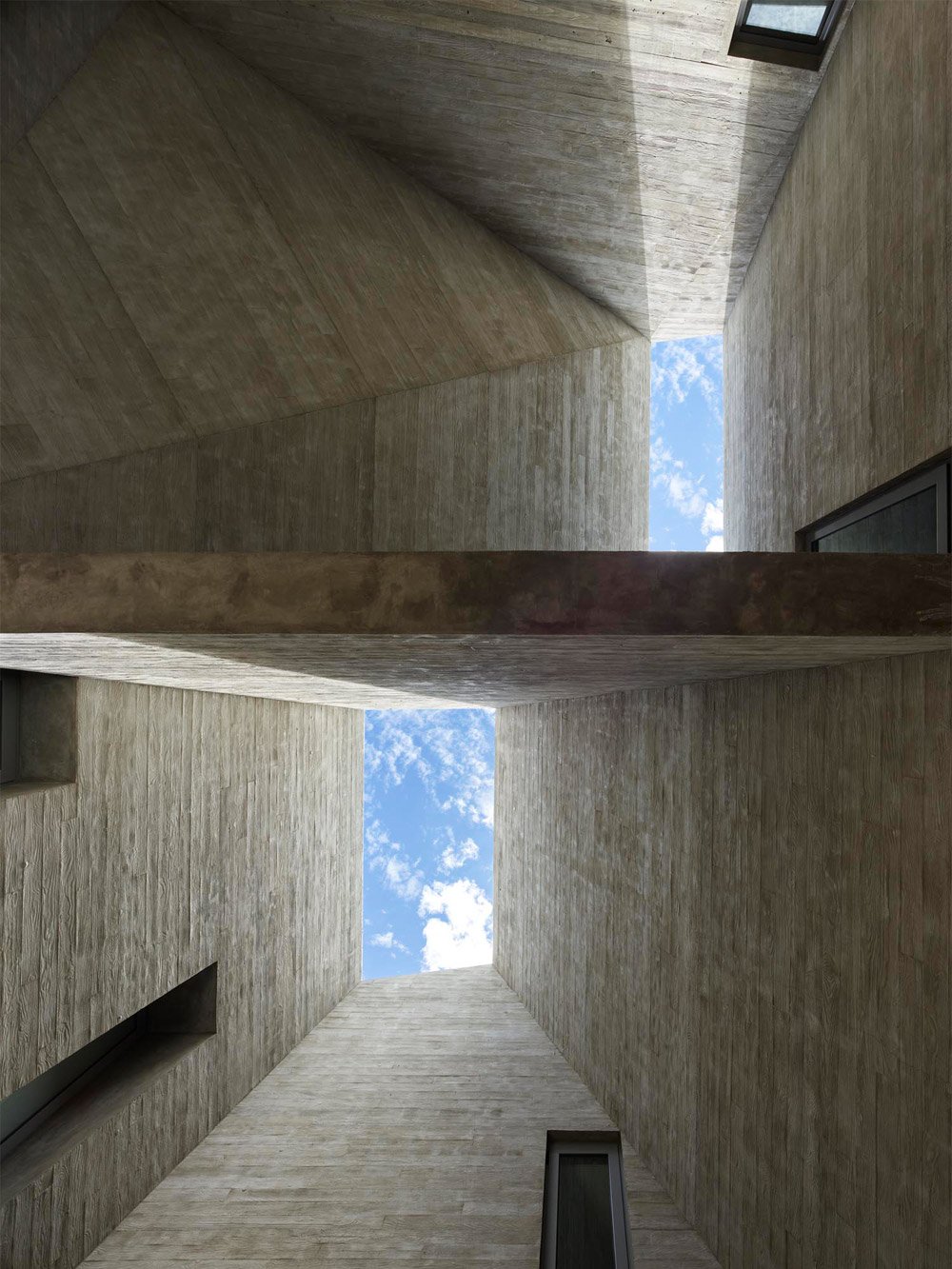 The varying orientations of the breezeway’s lightwells mitigate heat absorption and facilitate airflow to create a kind of natural air conditioning. 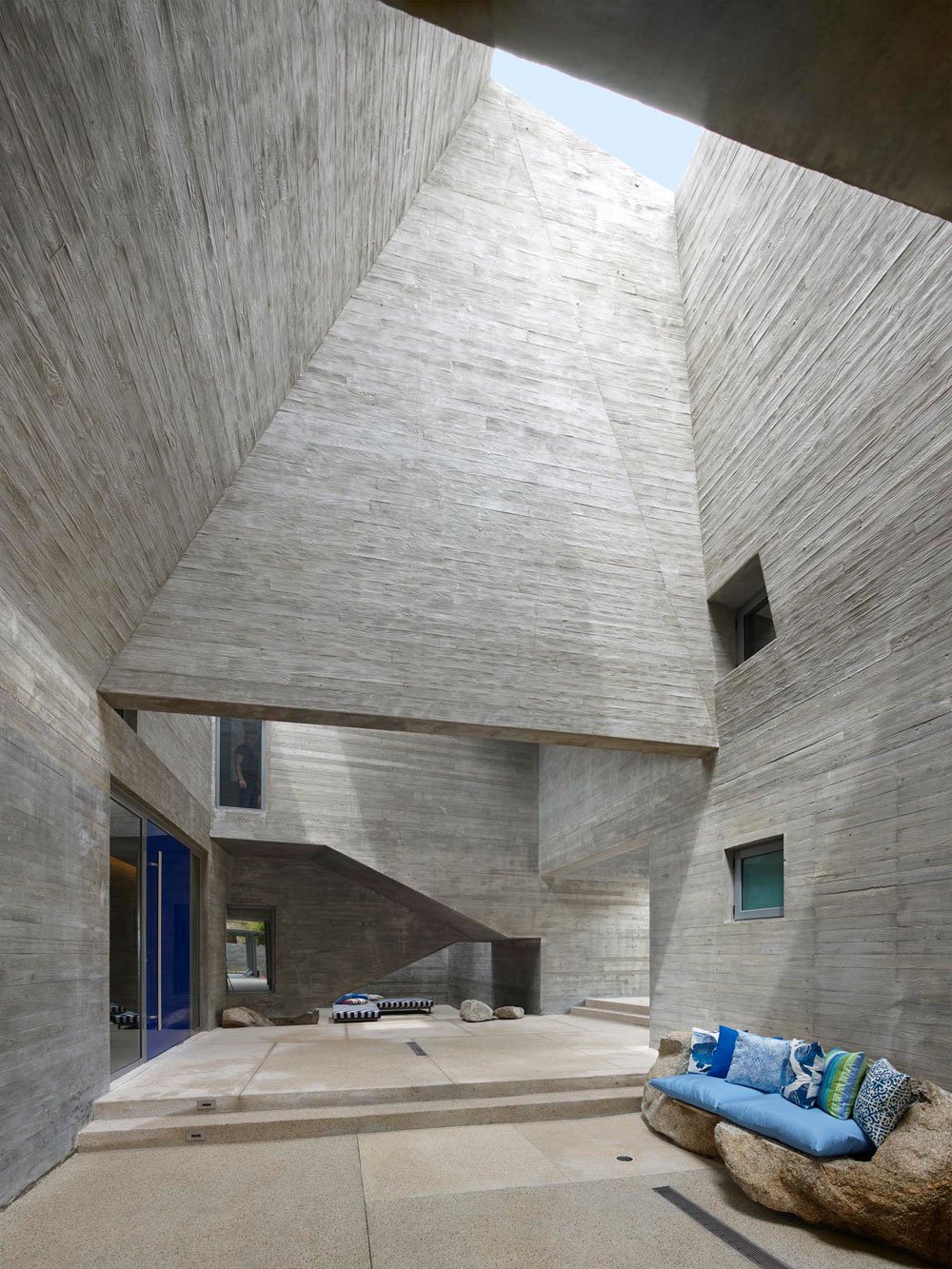 The entry gates step down to a soaring courtyard anchored by a massive cobalt blue front door. The enclosure is one link in a breezeway that runs the length of the house.

The most unique architectural features are concealed within the building. For the interior walls, Huerta had the board-formed concrete sandblasted to accentuate the wood grain. And while the layout of the house is fairly conventional (with the kitchen and living spaces on the ground floor and ensuite bedrooms above), there’s an additional element that serves as both a conceptual and literal centrepiece: an open breezeway that runs lengthwise along the spine of the building.

This passage — a contemporary iteration of the classic Roman or Parisian arcade — is topped with shaftlike open skylights that taper, variously, toward the north or south. An aperture on the east side draws in the ocean breeze, and the lightwells, with their varied orientations, create heat differentials, which facilitates airflow. “The wind passes through the house and flushes heat out constantly,” says Huerta. “It can be 100 degrees Fahrenheit outside and only 75 degrees in the breezeway.” 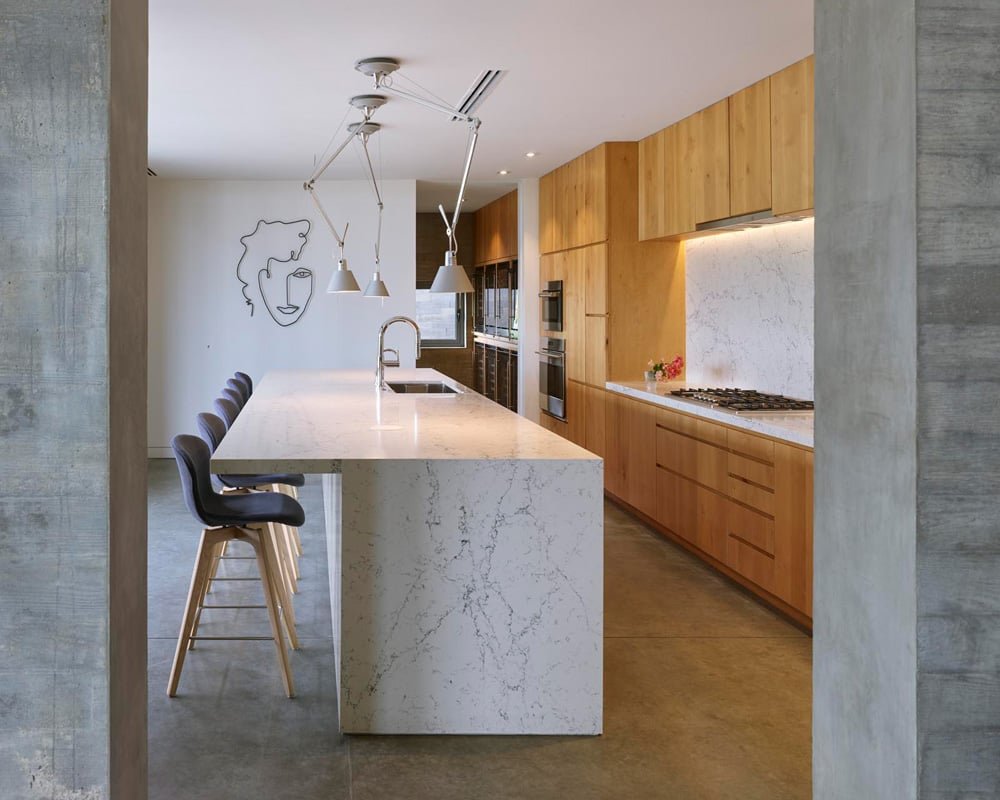 A view of the kitchen is framed by the home’s distinctive interior walls, made of board formed concrete sandblasted to highlight the wood grain. 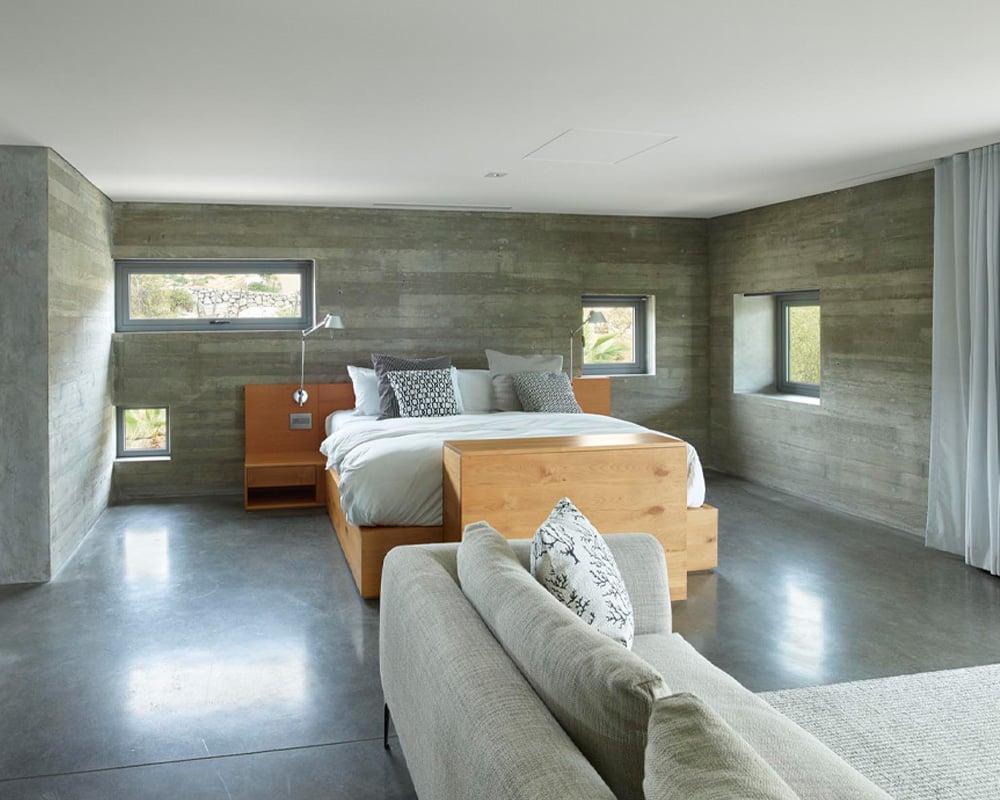 In one of the upper floor bedrooms, unstained pale-wood furniture warms up the residence’s austere shell, which is dotted with strategically placed apertures of various shapes and sizes.

Architects, Huerta believes, should think not only about what to build but also how to build it. Many developments in Baja California proceed like this: An American investor, rich in pesos and ignorant of the Mexican labour market, hires a local fixer to secure materials and contract out the construction. That fixer then spreads money around to various interests — including, oftentimes, government officials — but still somehow manages to underpay his labourers. Huerta, however, cut out the middlemen, opting to negotiate directly with contractors and suppliers. The money he saved on what might euphemistically be called “facilitation fees” was then passed on to workers, whom he paid well above market rates. 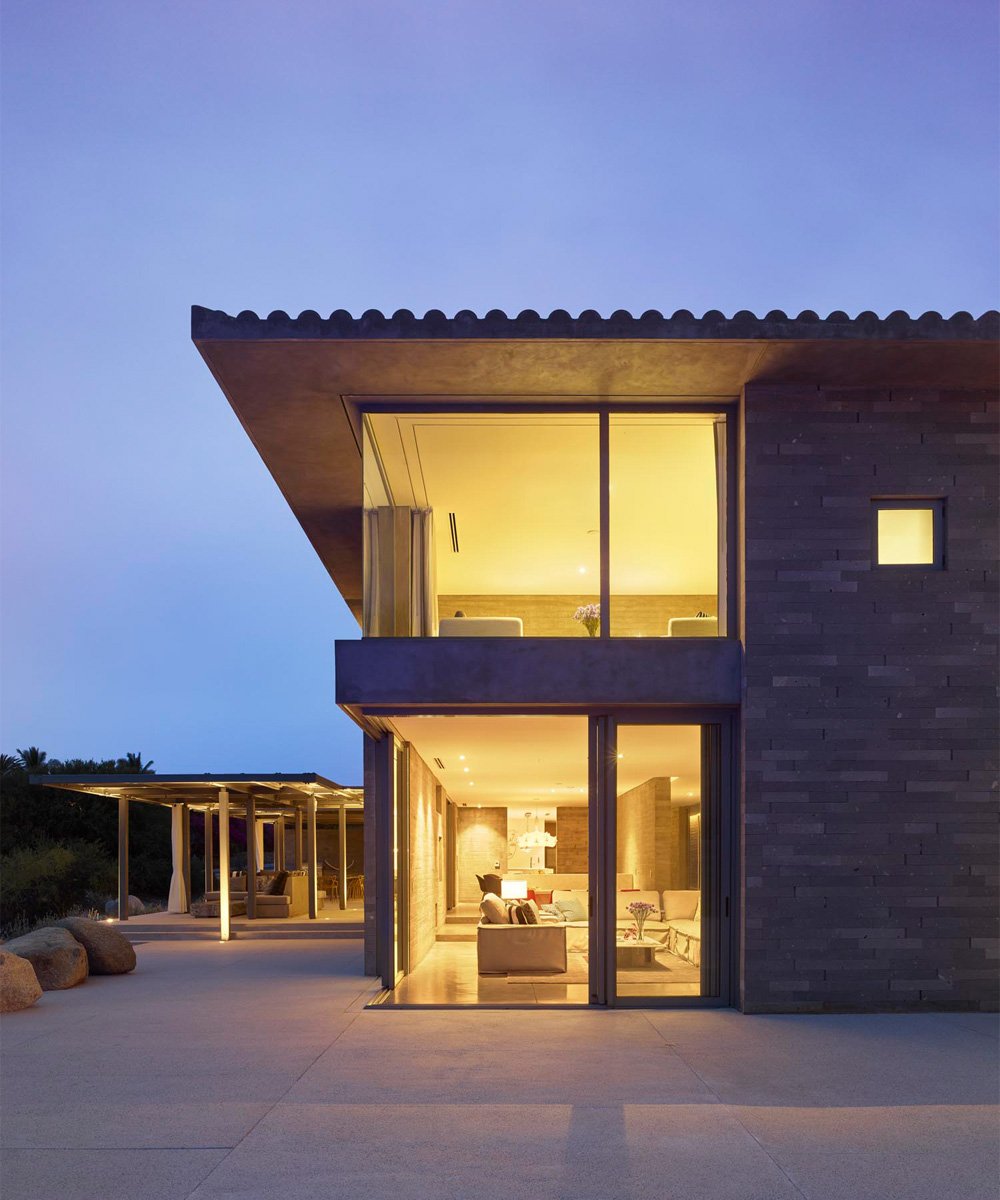 The exterior of Casa Escondida is clad with Cantera, a flinty Mexican stone as reflective of Huerta’s devotion to context as the desert plantings that speckle the property.

“Architecture always exists within broad socioeconomic and political systems,” he says, “and we are actively seeking ways of making our work more directly engaged with social and environmental issues.

“This kind of strategizing,” the architect adds, pointedly, “is a form of design thinking, too.”

Besides being austerely beautiful, Casa Escondida by Studiohuerta is a model of both local know-how and fairer labour practices.