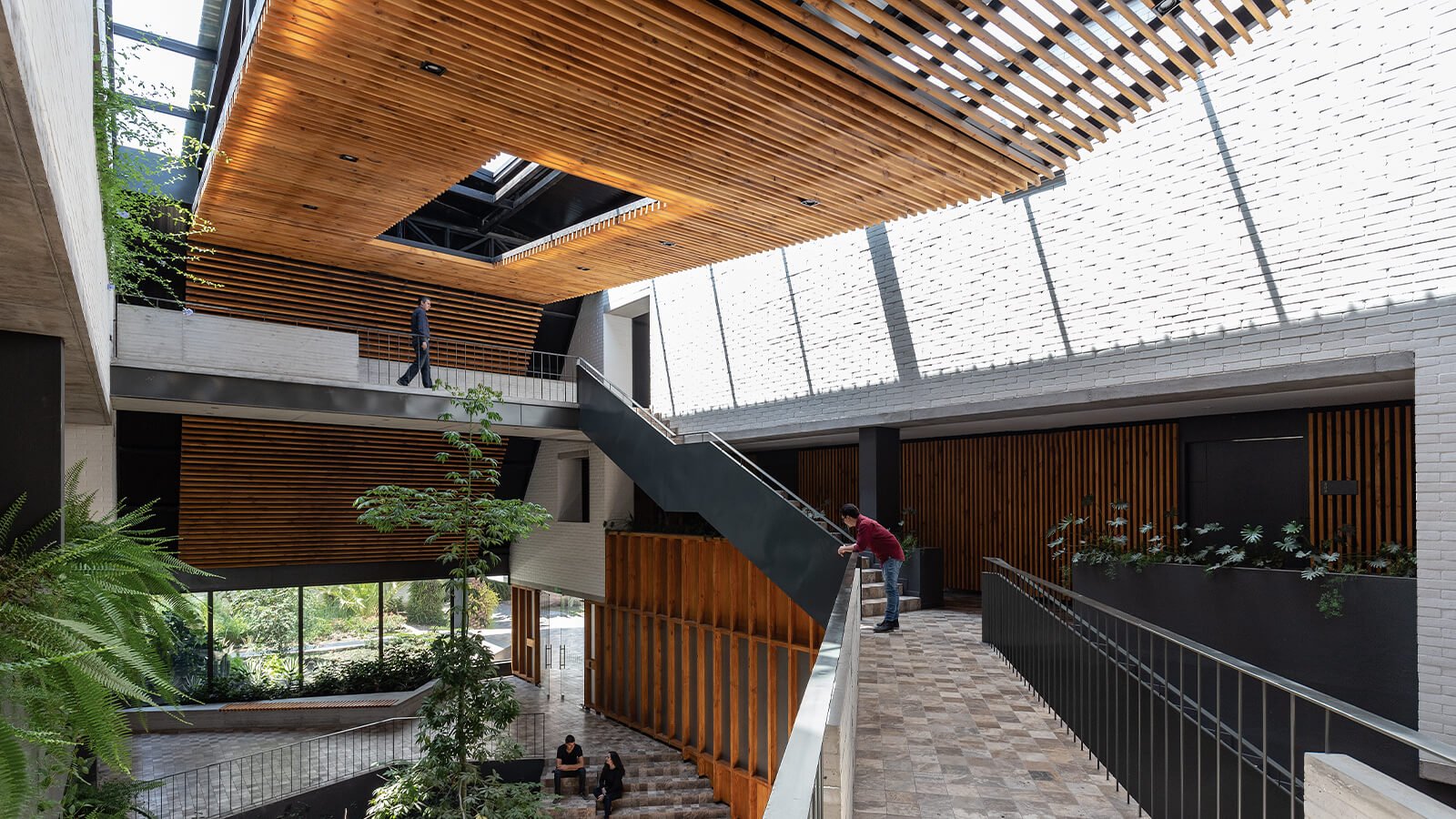 The Ecuadorian architects champion aesthetic and functional fluidity in an eco-sensitive complex that houses their own office.

There are a number of qualities that make Natura — a 2,500-square-metre office and residential complex in the Quito suburb of Tumbaco, about 25 kilometres southeast of the capital — unique among buildings in the country and indeed in South America. For one, it’s unusually open, both in its relationship to the street and in its use of interior space. 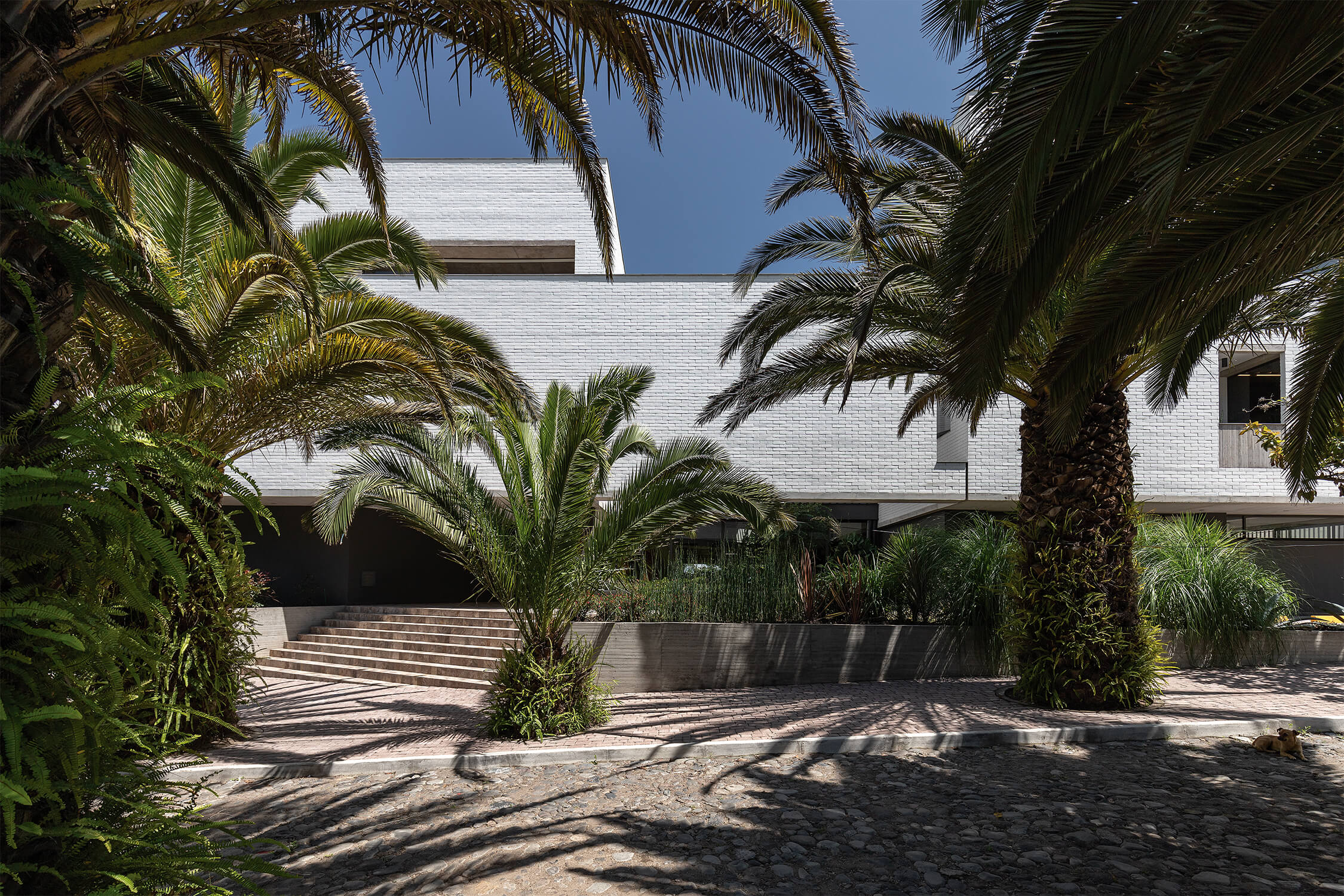 Natura’s unusually open entrance is marked by low, wide steps and a riot of mature trees, around which the complex was built. The landscaping is by Clemencia Echavarría.

Unlike many buildings in Latin America, it doesn’t lie behind high walls, but welcomes occupants and visitors with verdant, unbarricaded frontage and a flight of low, wide steps that leads to a check-in booth and the main entrance. Its defining feature, moreover, is a soaring central atrium, partly open to the elements, that separates the residential component from the offices.

As its name implies, the complex is also strongly connected to nature, which is out of the norm for many buildings in Tumbaco. Despite the bedroom community’s stunning setting in a temperate valley surrounded by mountains, many of its commercial structures are squat and unremarkable, offering little in the way of greenery, views or indoor–outdoor appeal. 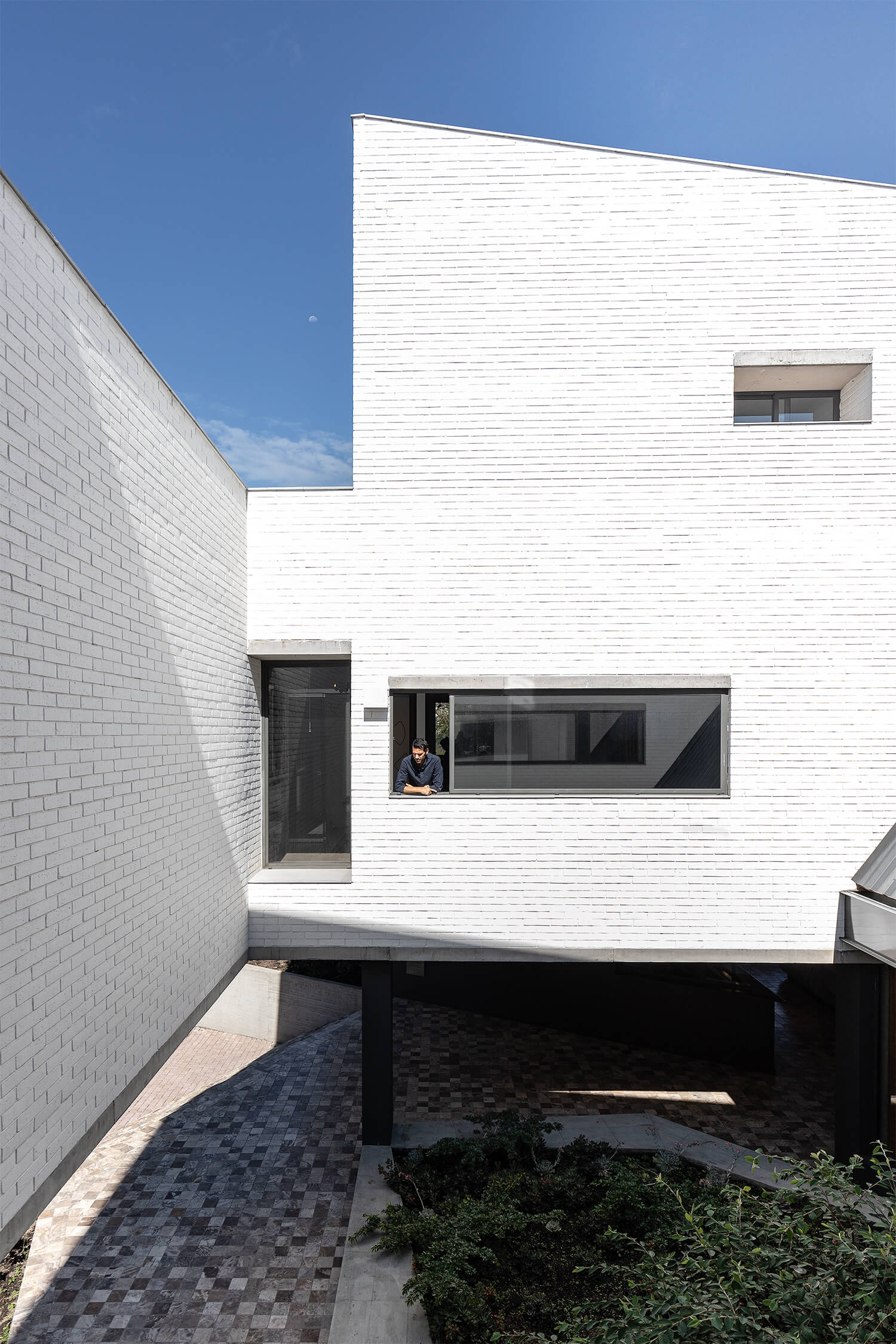 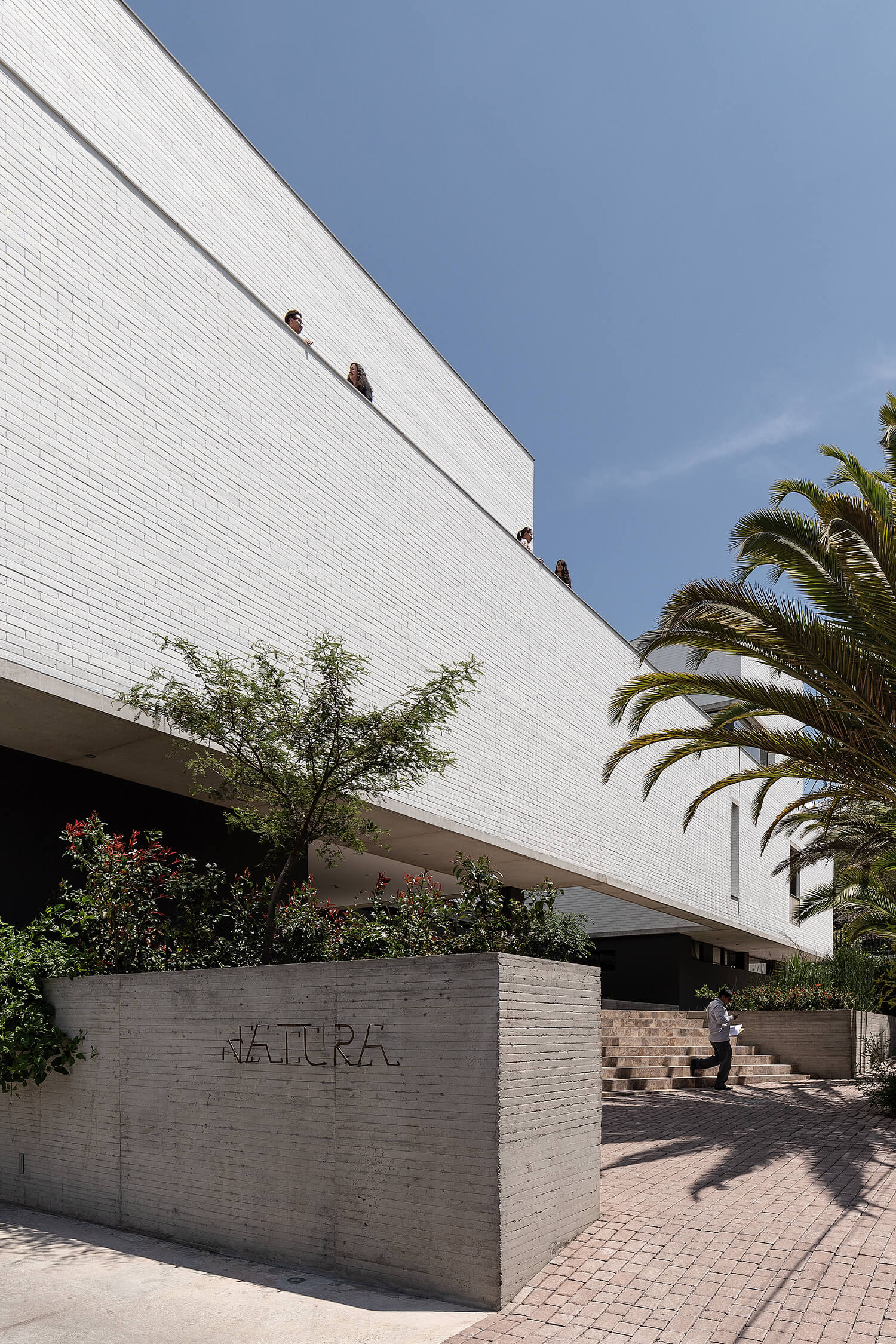 The firm that designed Natura, Diez + Muller, took a more sensitive approach, building around existing mature trees, using the sloped site as a key design element and incorporating features that optimize natural lighting and ventilation, such as roof terraces, balconies and courtyards.

Natura, finally, is a social experiment of sorts, its mixed-use program designed to showcase the benefits of living close to where one works — and especially the advantages of not having to join the caravan of commuters who drive to and from central Quito in tortuous traffic every day. Diez + Muller’s principals, who had a hand in developing the project as well as designing it, are so committed to the idea of work–life proximity that they installed their own studio in an upper level corner of the building. 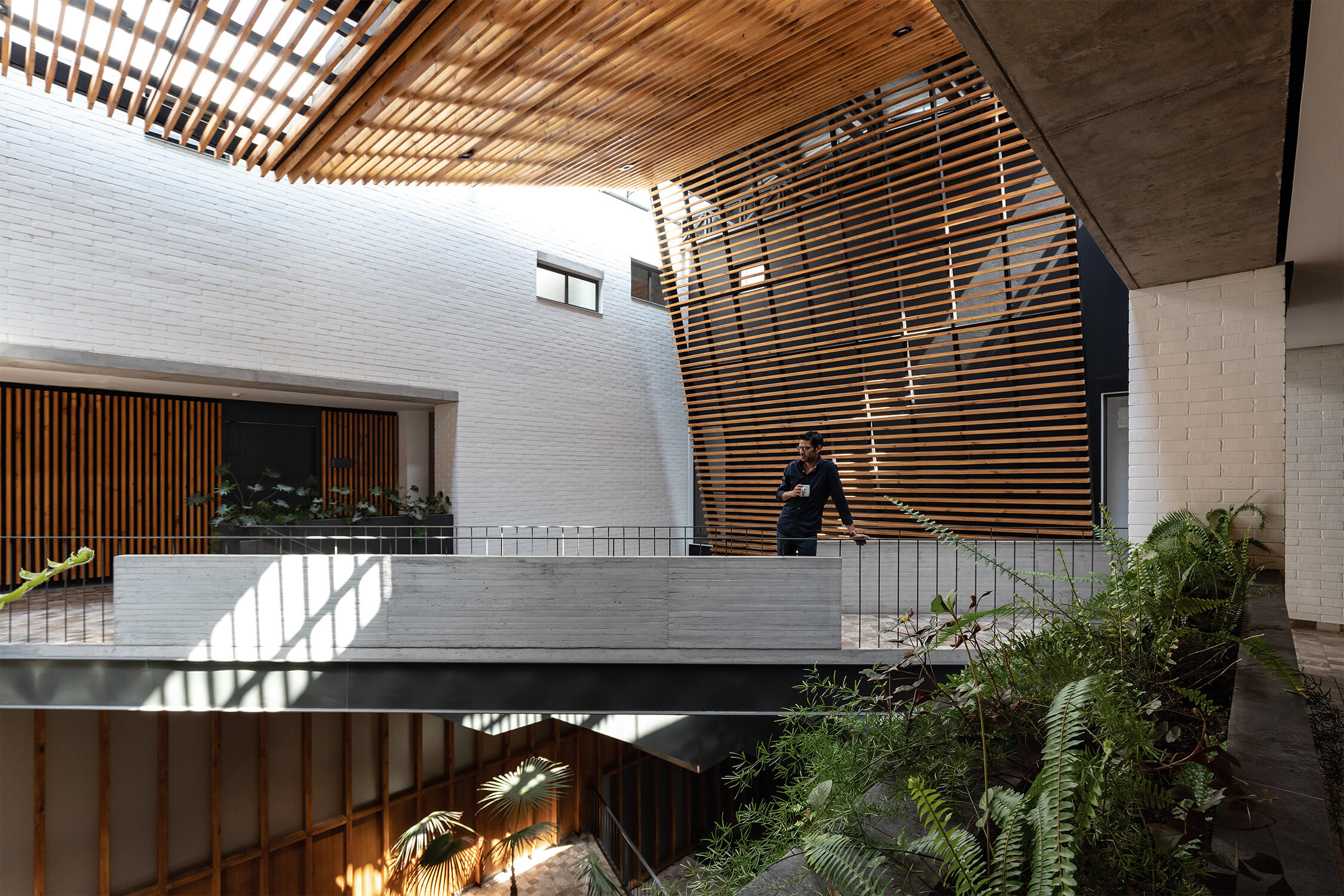 Felipe Muller, who studied architecture at Tecnológico de Monterrey in Mexico, also resides in the complex (there are 20 office units and five apartments overall), while Catholic University of America and Syracuse University alum Gonzalo Diez lives nearby in the surrounding valley, as do eight others in the 12-person firm.

“We were interested in having our office closer to where the majority of our work was, and also wanted to work closer to where we live,” say the architects. “That’s why we saw an opportunity to be part of the developer group, as well as the designers of the project.” 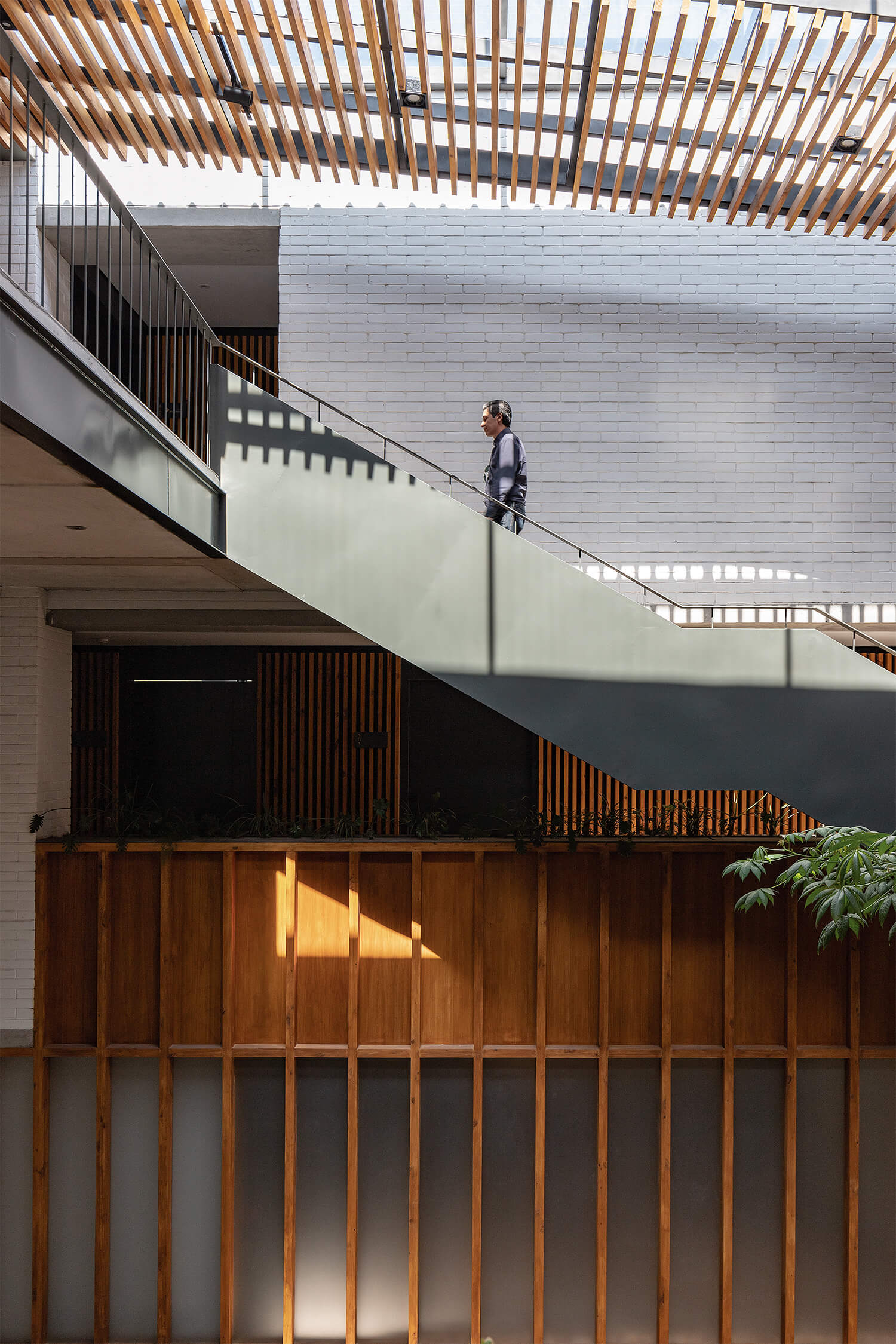 The building, on a sloped, 6,841-square metre plot, is animated by its spatially complex atrium.

Quite apart from Natura’s logistical appeal, the building would be an alluring one wherever it was situated. After mounting those wide front steps and crossing the low-slung threshold, visitors arrive at a four-storey skylit atrium, with the entrance to the residences on one side and a stairway to the offices on the other.

The skylights are screened by a suspended ceiling element made of Chilean pine, while the lobby’s walls are covered with a warm wood called roble marfil, a type of local eucalyptus. The ode to South American materials also extends to the pavers — made of Peruvian travertine — that cover the floors, the staircases and the catwalks spanning the space. 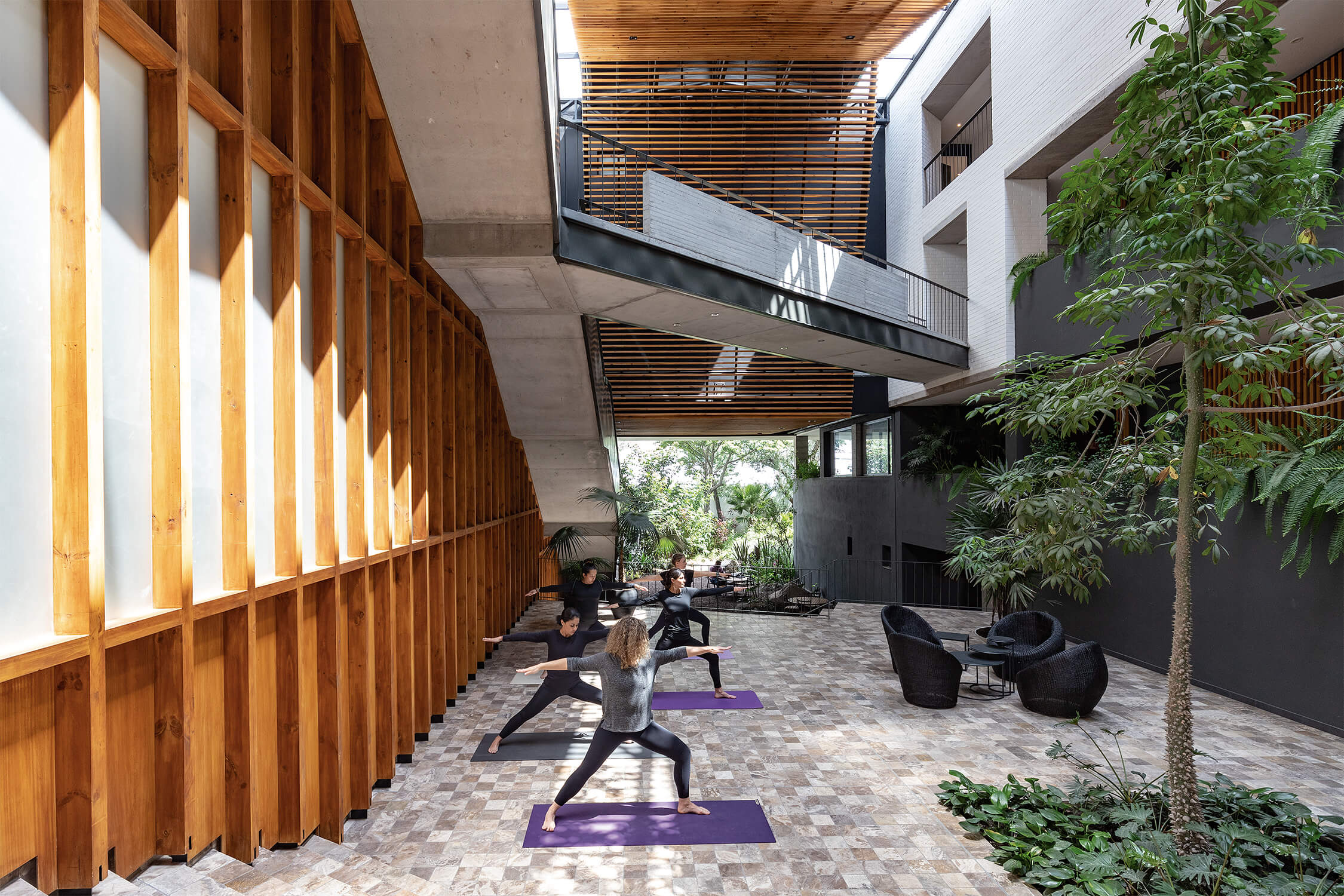 But Natura’s design is very much a product of its site. The atrium — which functions as a kind of building commons, hosting yoga sessions, nutrition workshops, book launches and more — is built around a towering Erythrina crista-galli, a South American tree characterized by “a beautiful spiny trunk and, in some parts of the year, a big pink flower,” the architects say.

It was among the various on-site trees, including jacarandas, acacias, carobs and avocados, that the building’s footprint accommodates; a dendrologist commissioned by Diez + Muller determined which should not be moved and which could be transplanted to either a nursery or another on-site location chosen by the project’s landscape designer, Clemencia Echavarría.

A similar deference was paid to the site’s sloping contour. The rear of the complex, which sits on an plot of 6,841 square metres overall, is significantly lower than the front of the building, although this is almost imperceptible from inside, given the complex spatiality of the atrium and the varying ceiling heights of the underground parking garages.

That rear part of the site, which is open to the lobby, is an idyllic garden setting that incorporates a riot of plants — and is a key example of the “permeability” that the architects strove for on the whole. 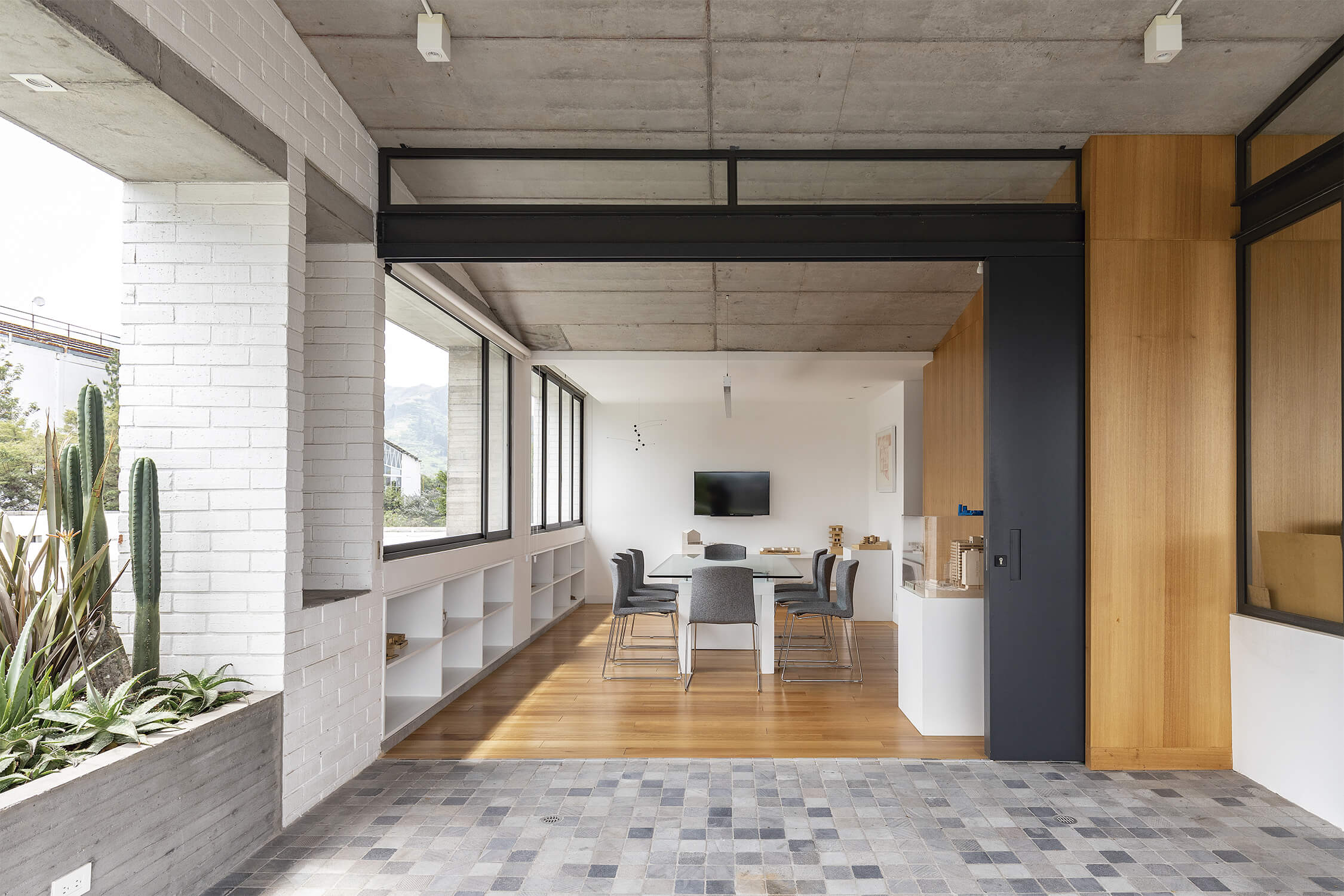 Another example is the way that Diez + Muller’s own office transitions fluidly between inside and outside. A good chunk of the studio’s 180 square metres consists of outdoor terraces connected to the office via sliding doors — an attractive feature in any workplace, but especially valuable in the age of social distancing. 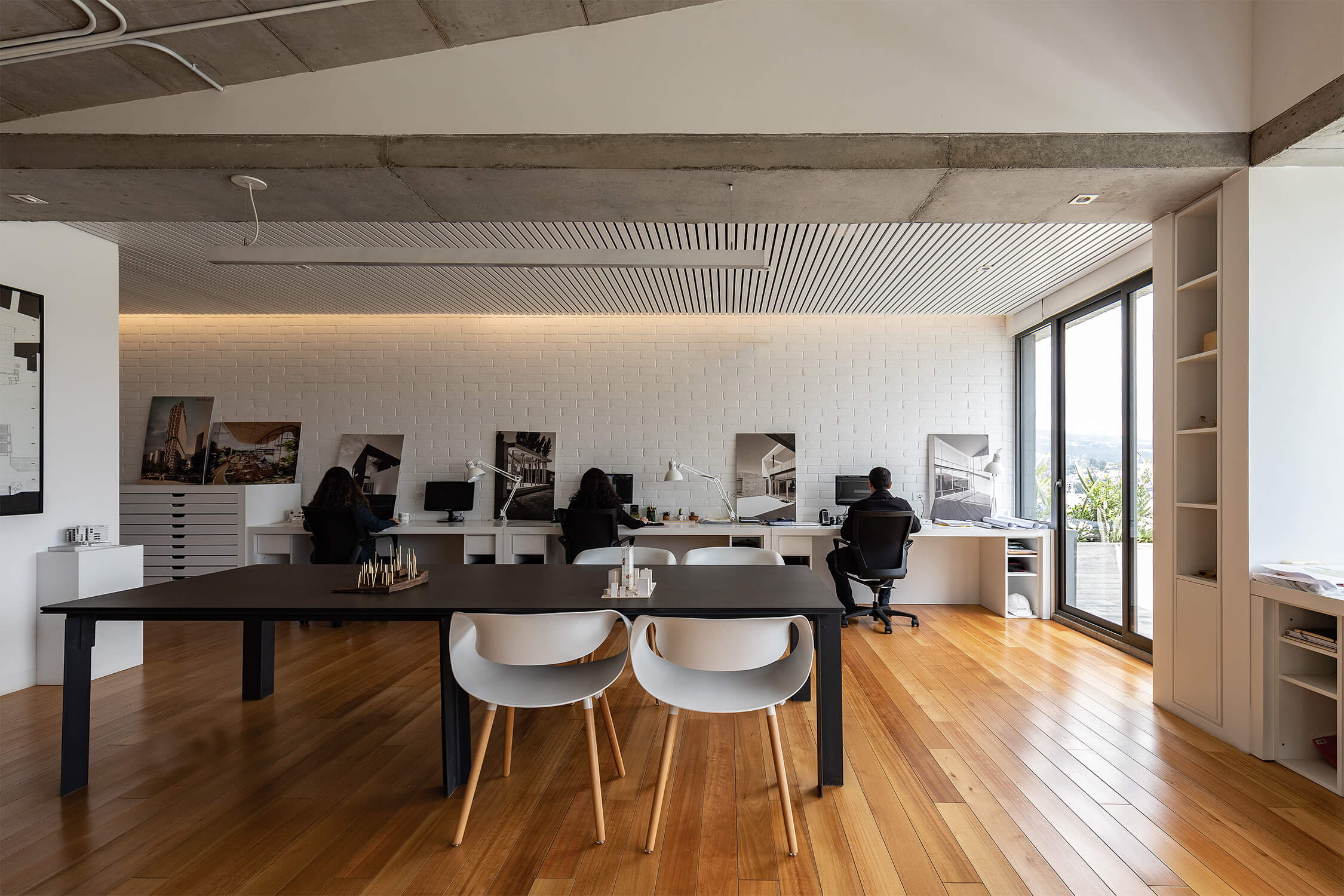 Diez + Muller has also situated its own studio in Natura, which houses both offices and apartments.

Such floor-to-ceiling doors and windows were only incorporated into the north and south facades of the building, which the sun hits less directly; windows on the east and west sides of the complex are smaller scaled vertical and horizontal slits that regulate exposure to sunlight and punctuate the complex’s painted brick skin dynamically. “Especially on the equator,” the architects explain, “east and west facades have the most aggressive sunlight.” 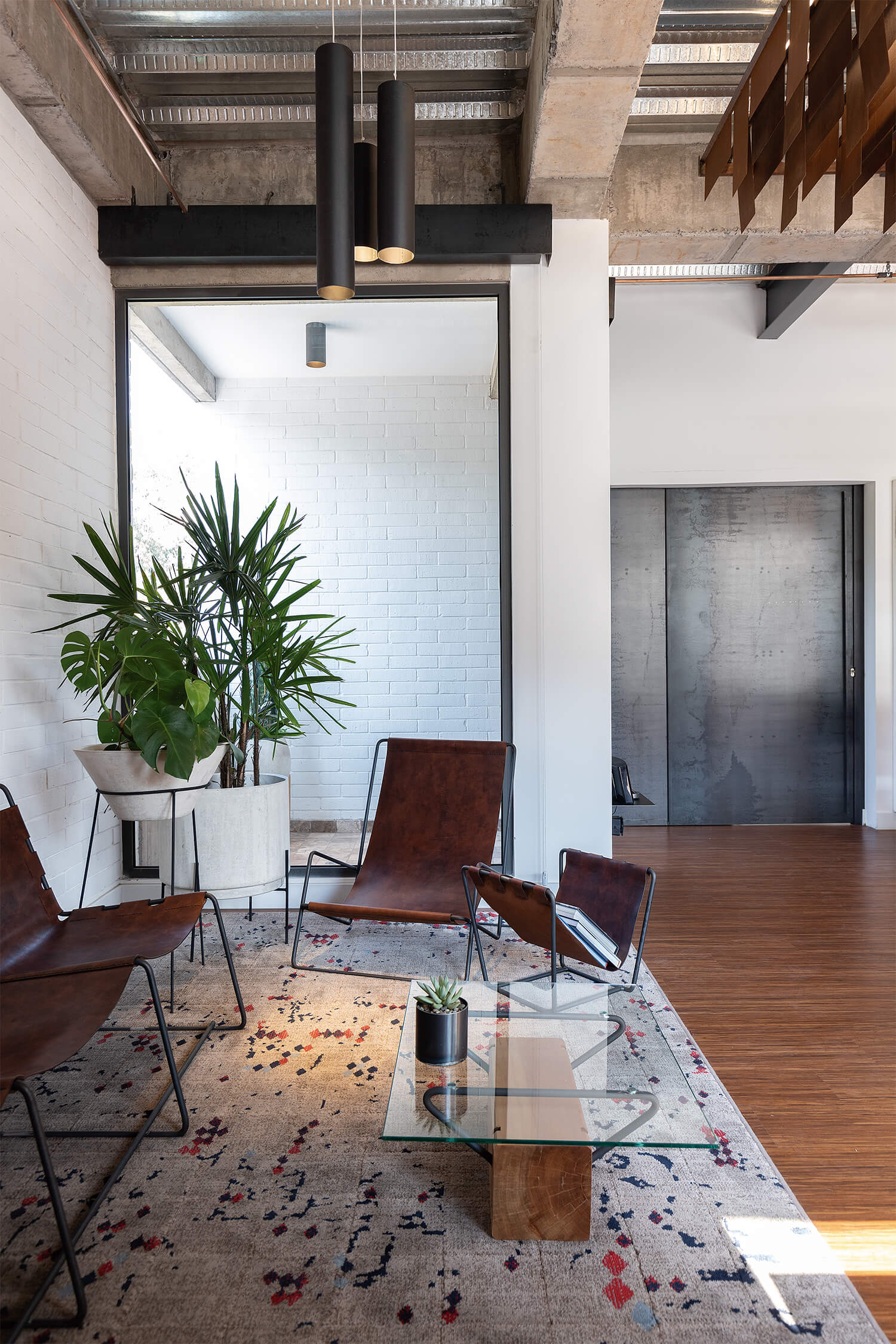 This kind of deep contextual knowledge illustrates just how attuned the firm is to local conditions. At the same time, it has presented, through Natura, a new way for Ecuador (and any other country really) to think about and build contemporary workspaces.

This one places openness, sustainability and human health at the top of the values list. And it resonates. “Visitors see in it a great model to replicate,” say its proud designers, adding that at least one developer who “saw some pictures of Natura and later visited it” has expressed interest in realizing a similar concept. 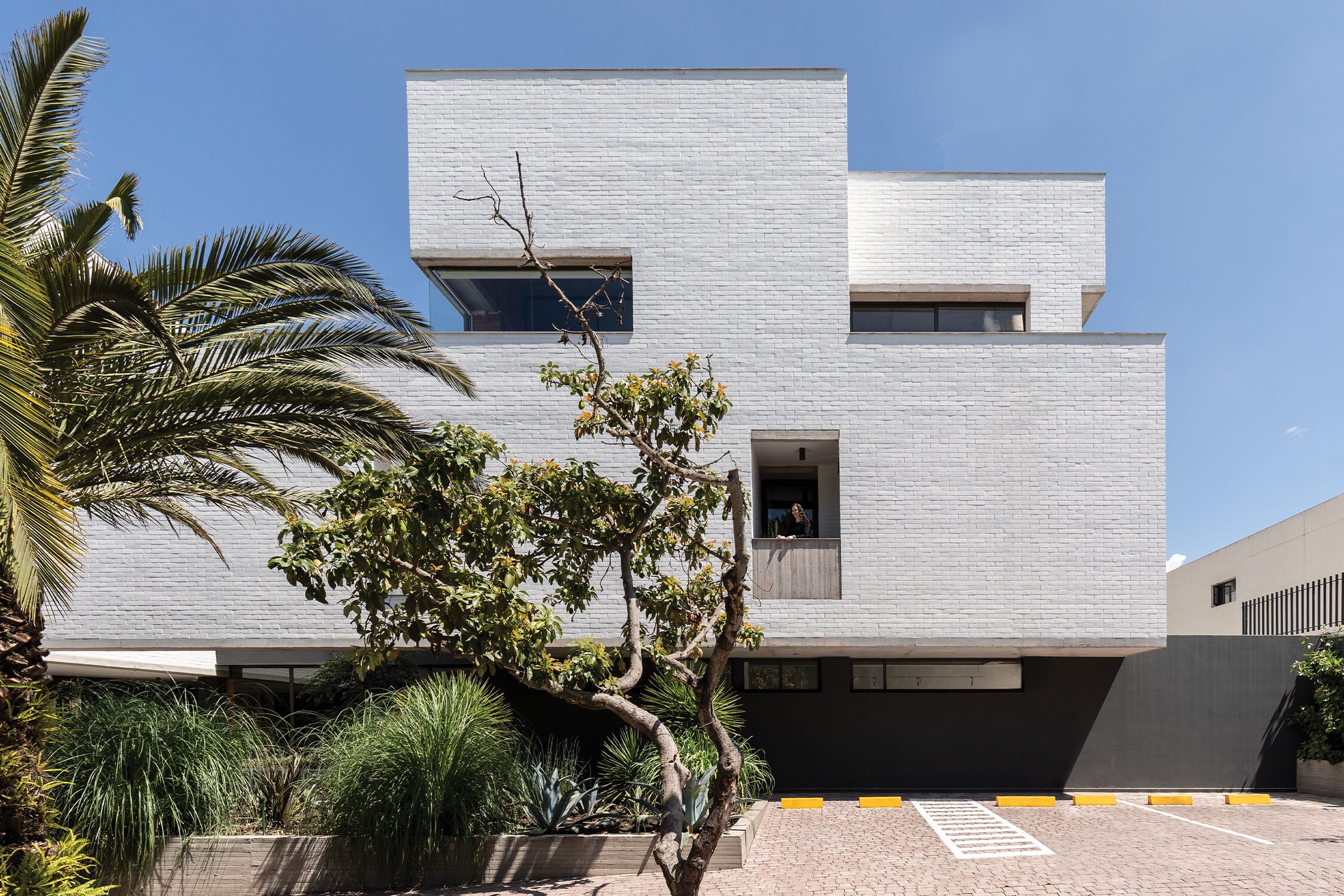 The Ecuadorian architects champion aesthetic and functional fluidity in an eco-sensitive complex that houses their own office.