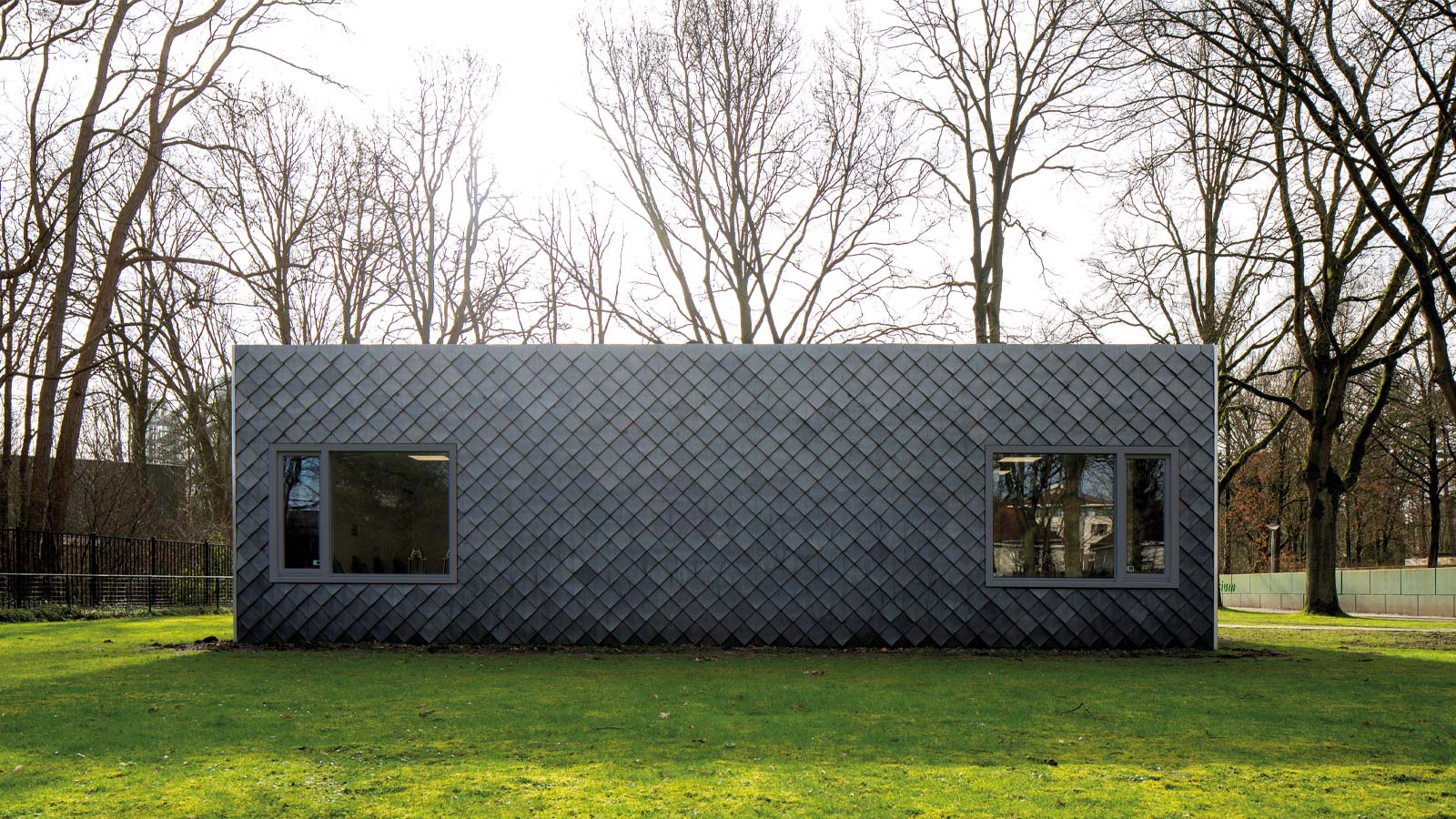 Launched by a Dutch collective, the roof and wall cladding is made from gutter pipes and window frames.

PrettyPlastic is an outlier. The line’s exterior cladding tiles are made entirely from used PVC construction waste such as gutter pipes and window frames; there is no new material in their composition. Its creators say the shingles are the world’s first 100 per cent recycled cladding. 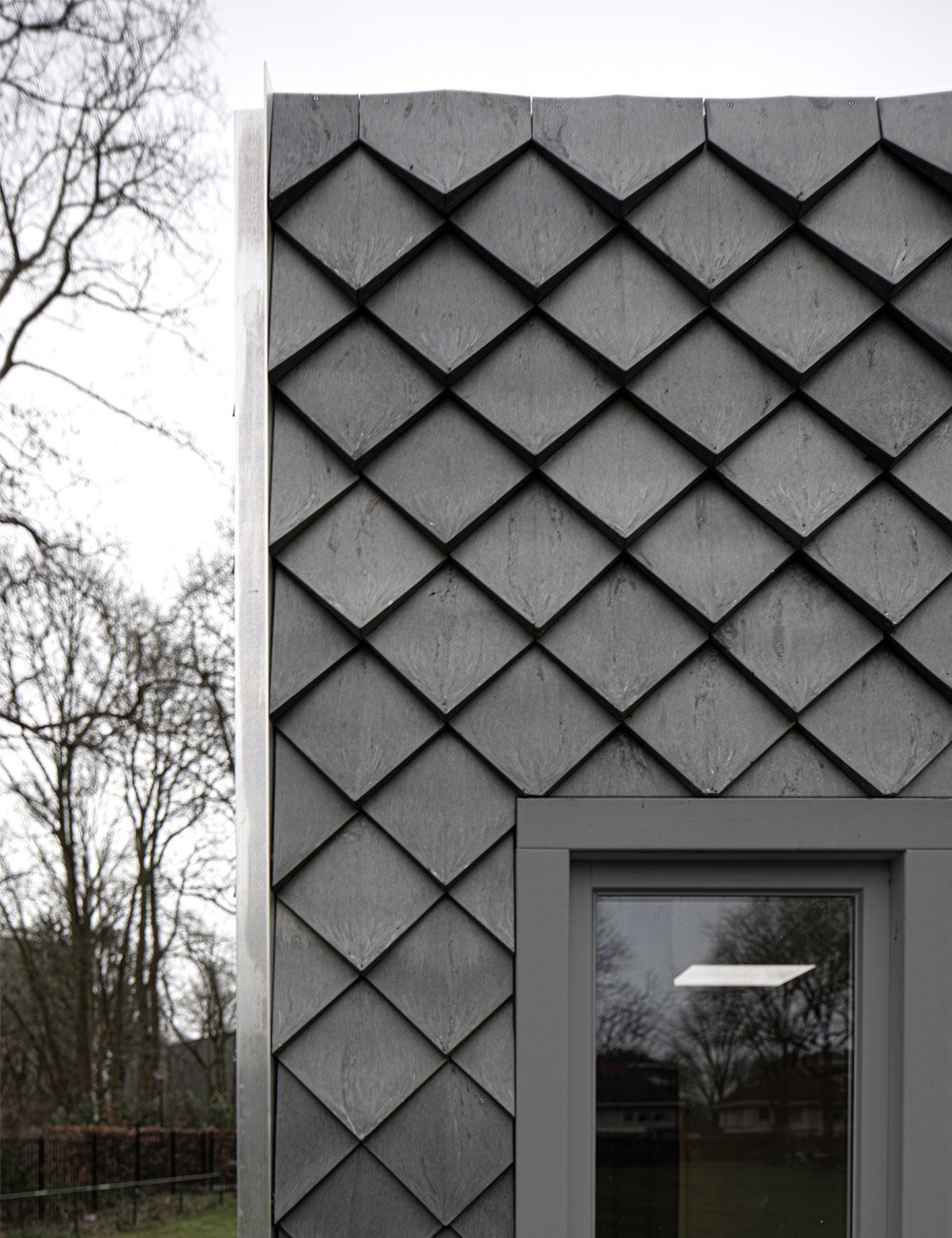 Applied to a pavilion for a school in the Netherlands, PrettyPlastic tiles are made from 100 per cent recycled PVC.

The Amsterdam team that makes PrettyPlastic was founded by designers Reinder Bakker and Hester van Dijk of Overtreders W and architect Peter van Assche of Bureau SLA. The three met as neighbours and began collaborating, eventually designing a coffee bar made entirely from secondhand materials. Their partnership evolved when a local group collecting household plastic asked them whether they could repurpose their items into something new. Spurred by the challenge, the three began investigating plastic’s potential.

“We always had this idea of making an upcycled material one day,” says Bakker. “There are many designers doing things with recycled plastic, but it’s always little projects.” In order to process  “tons” of the waste, they built their own machines to begin turning it into wall tiles, which they used to construct the People’s Pavilion during Dutch Design Week 2017. The reactions were so overwhelmingly positive that the team decided to develop the prototype into a commercial product.

Acquiring fire certification proved to be a challenge. To get their mixed-material tiles certified, they would need to incorporate chemical solutions, defeating the goal of creating a sustainable product. That’s when they turned to polyvinyl chloride, better known as PVC. “It lasts forever,” says Bakker. “And it’s fire-resistant.” PrettyPlastic’s PVC comes from the building industry in the Netherlands, where it’s collected, shredded and then transported to Belgium for processing into shingles by Govaplast.

Nine shades of grey are offered for the diamond-shaped, stone-look cladding tiles. Other hues are currently in development.

From a distance, the diamond-shaped shingles have a stone-like quality, appearing akin to slate. Even up close, they’re not a giveaway for plastic. Easy to mount and highly durable, they are comparable to stone shingles, according to Bakker.

Currently available in nine shades of grey, PrettyPlastic is undergoing fire certification for new hues, since adding pigment slightly alters the composition. The collective received European class B fire certification (meaning the shingles are unlikely to contribute to fire development) in 2019. (Whether they can be used for exterior cladding in North America comes down to equivalency.) 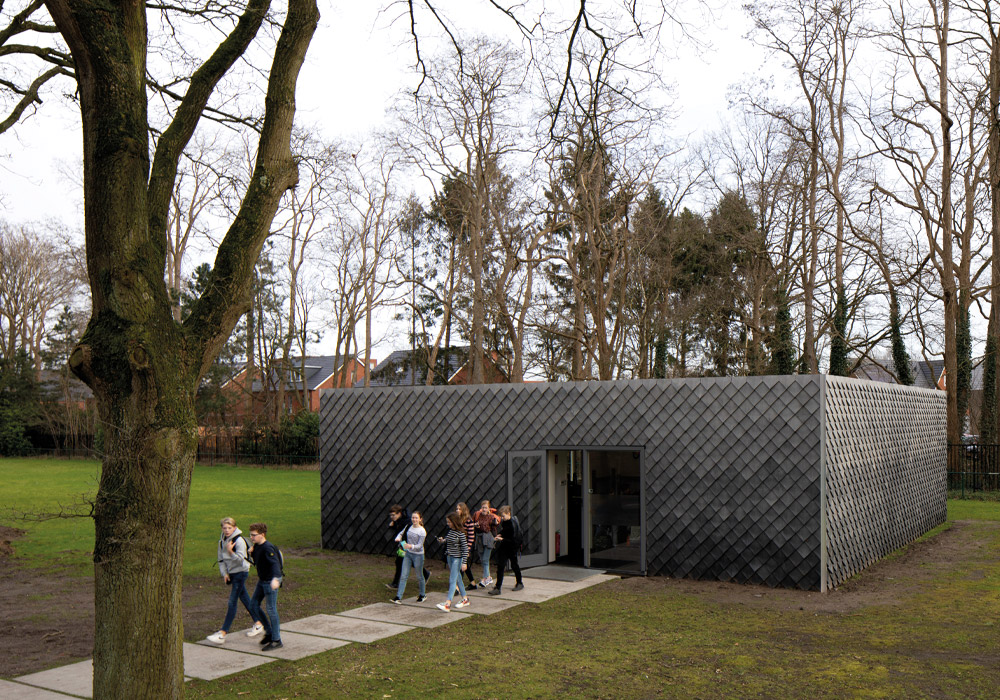 For now, the company is fielding global requests and moving into real-world applications. In January, Grosfeld Bekkers van der Velde Architecten clad a school pavilion in Oosterhout in PrettyPlastic, the first permanent structure to feature the recycled shingles.

Launched by a Dutch collective, the roof and wall cladding is made from gutter pipes and window frames.