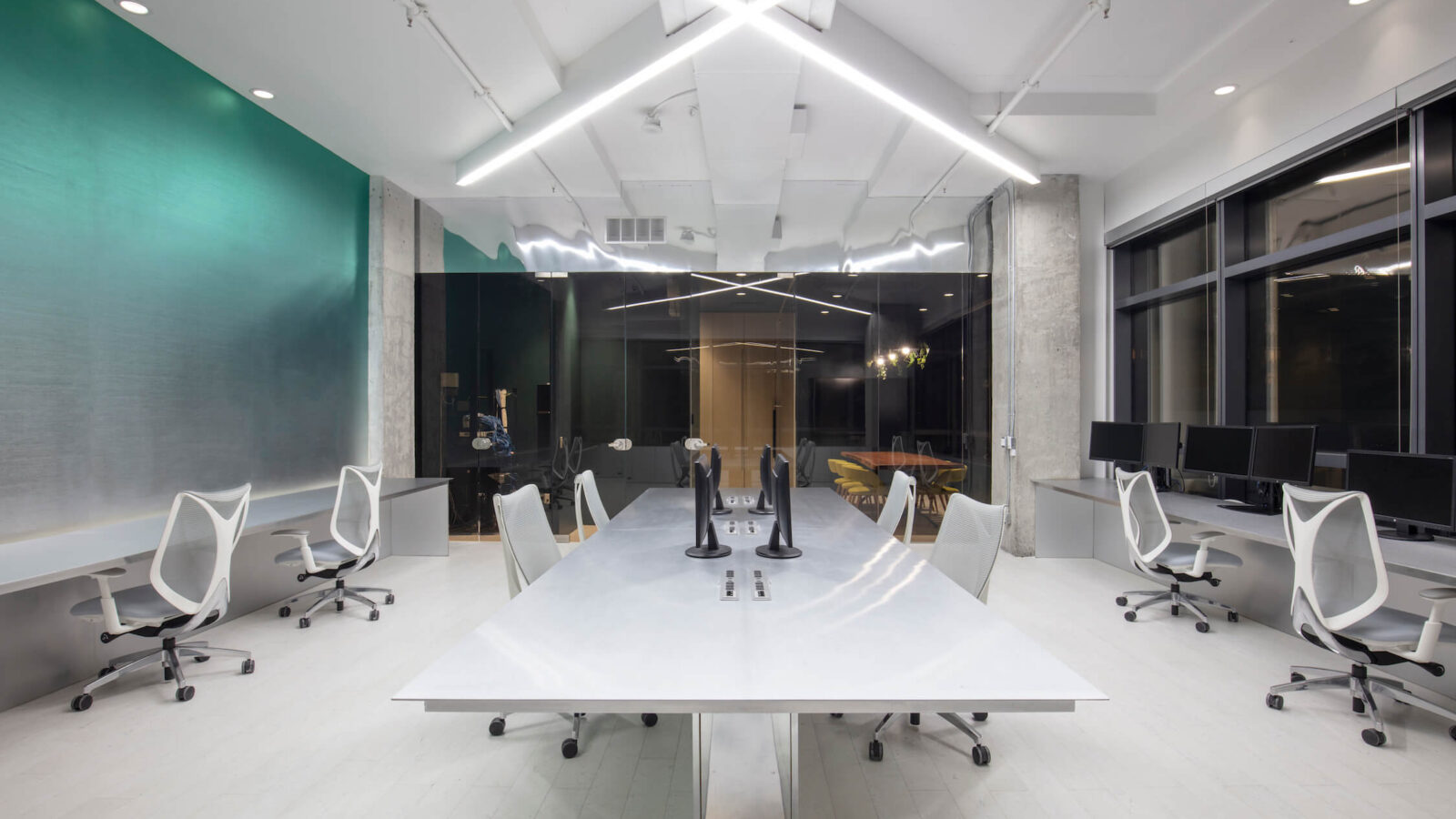 Specializing in database technology, CO-Sol is a Japanese company that provides its clientele with 24-hour support service. To create its new satellite office in Toronto, it turned to the local design studio UUfie, which transformed a compact suite in a massive mixed-use complex in the city’s north end for the firm. Taking advantage of the time difference between Toronto and Asia, CO-Sol’s seven employees handle nighttime duty for Japan out of the space. It’s the type of quirky cult-film premise — a tiny band of transplanted computer whizzes (plus one Canadian) quietly at work in a quasi-suburban residential and commercial building — that sparks the imagination. And the interior, replete with bold gestures and moody details, more than lives up to the cinematic promise.

Eiri Ota — who runs Uufie, an interdisciplinary outfit, with Irene Gardpoit — set the scene from the beginning. Having assisted CO-Sol in finding the 92.9-square-metre office space, he regards what other prospective tenants might have seen as a drawback — the view outside its wraparound windows is partially obscured by a green roof — as a decided plus. “There’s a lot of natural sunlight and they’re facing the rooftop, which is a bit of a barrier, but also really nice,” says the architect, noting that the space is both open and private. 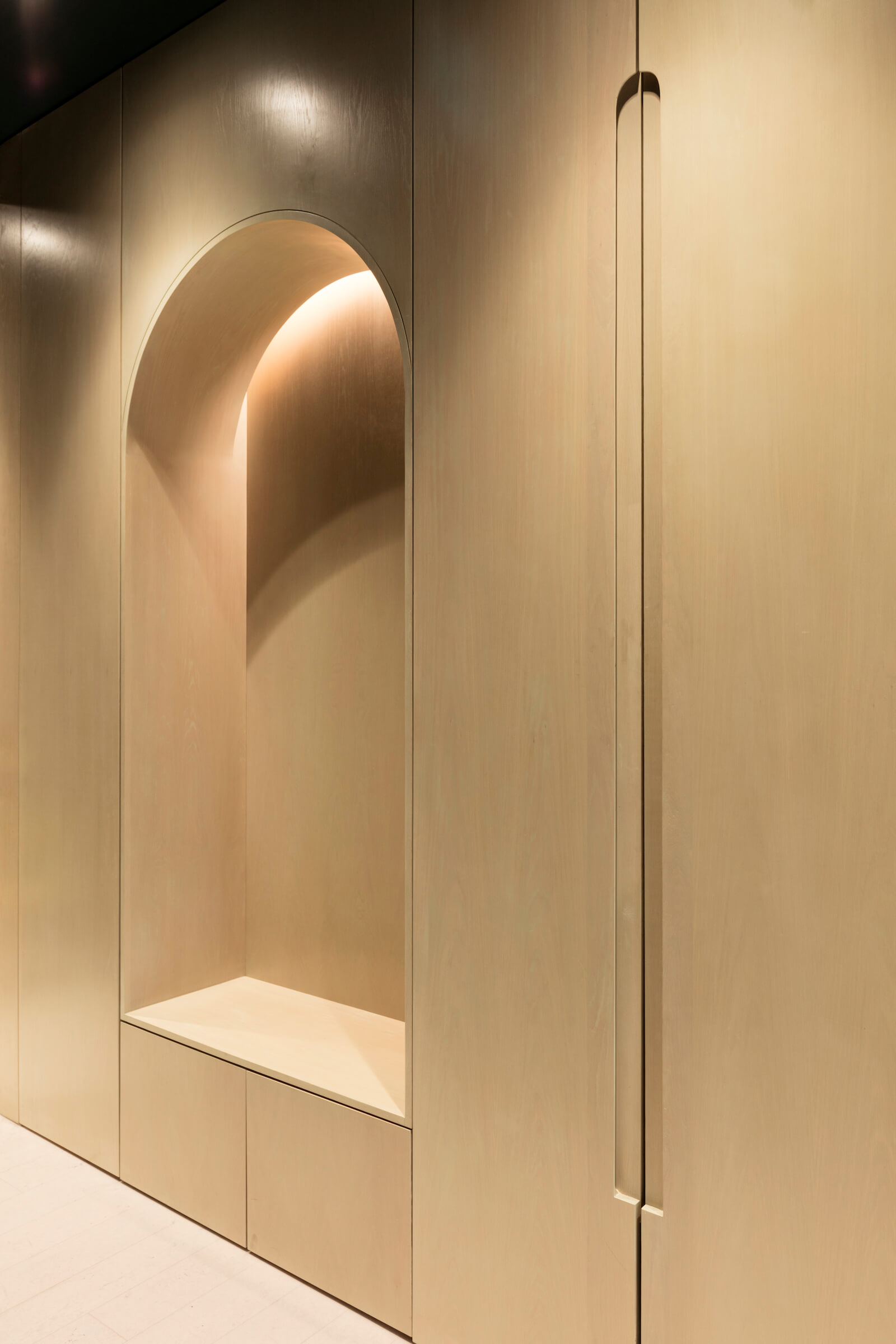 On one side, a semi-corridor leading into the office features white-oak-clad storage… 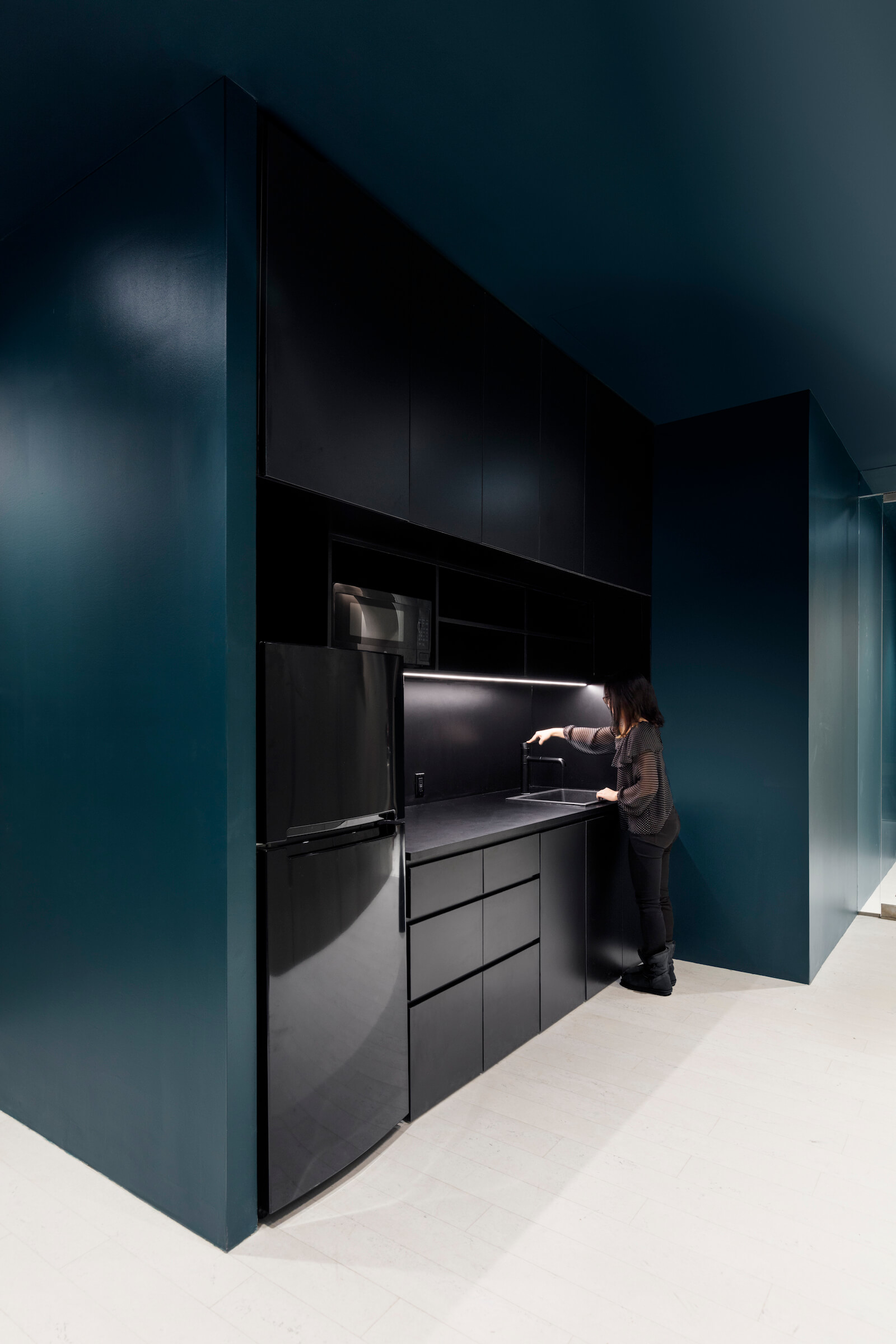 …on the opposite, deep teal walls encase an all-black kitchen.

Ota delights in other details. Upon traversing the first security barrier — a glass-doored alcove — he points out the canted metal supports that hold the security camera and keypad on a small desk. These types of devices, he says, are usually affixed to walls, but that felt cold and intimidating; in his view, placing them on the desk was much friendlier.

Further inside, this sense of warmth continues. The narrow semi-corridor that leads into the office proper, for instance, is lined on one side with custom-crafted millwork clad in a stained white oak veneer. Carved into the millwork, which features elegantly recessed vertical pulls accessing storage space behind it, is a backlit arched alcove with a bench at its base. Opposite this wall is an all-black kitchen, which at first appears like a good way to conceal dirty dishes, although Ota — who revels in eccentric design decisions — notes that the opposite is true: Everything that’s placed on the counter appears in sharp relief. 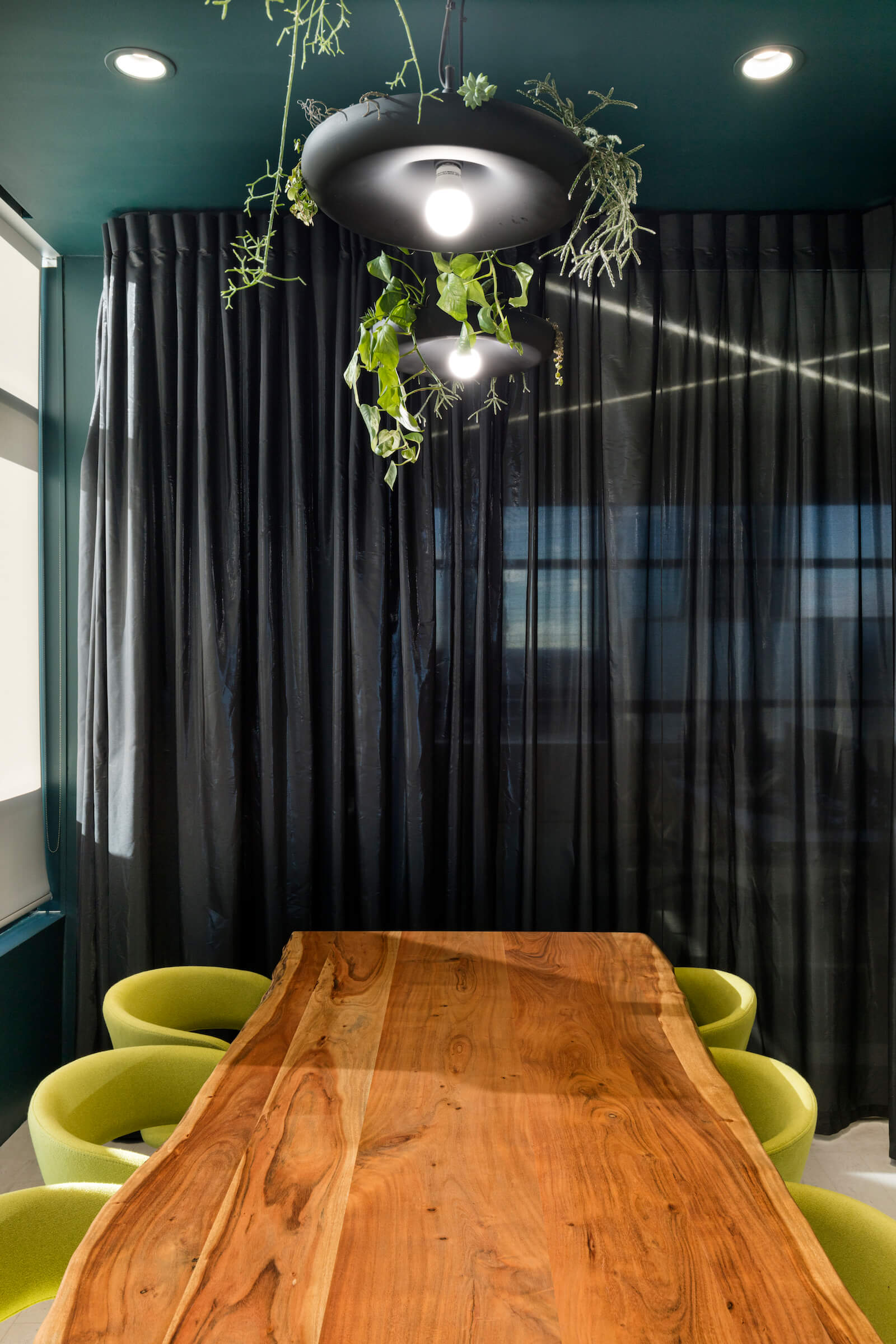 Just beyond this entrance area, a glass wall encloses a meeting room that’s painted a deep teal and contains a live-edge wood table. (“We chose a very Canadian table,” jokes Ota.) Object/Interface’s plant-filled Babylon pendant lights, painted black, illuminate the space. As counter-intuitive as this dark palette might seem for such a small room, it’s very effective. “It feels like you’re in the shadow of a tree,” Ota says. And despite the architectural panorama on display outside the window wall, it also creates a sense of intimacy and compression — which is instantly countered upon entering the adjoining main workspace. 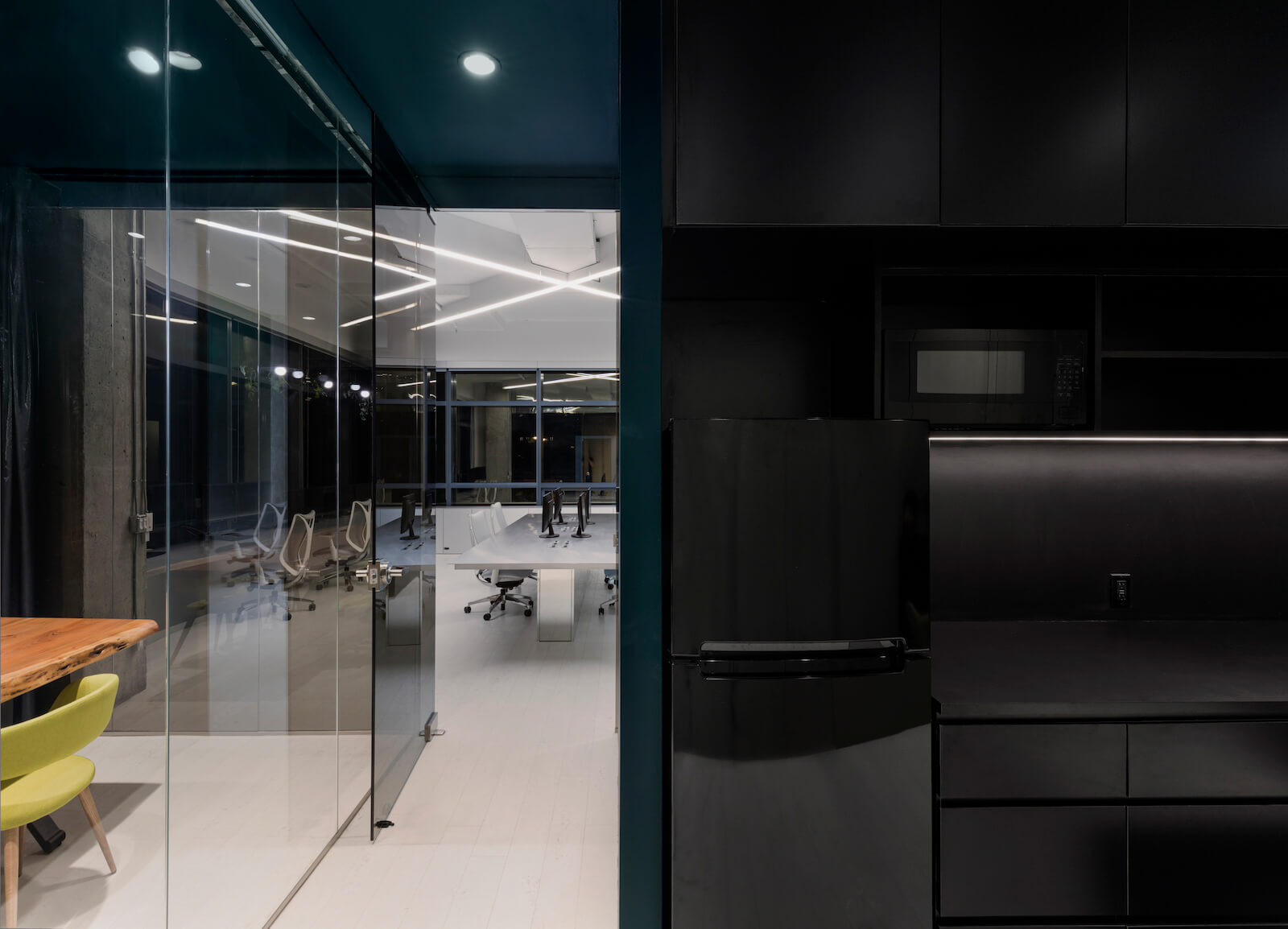 A view into the main workspace. 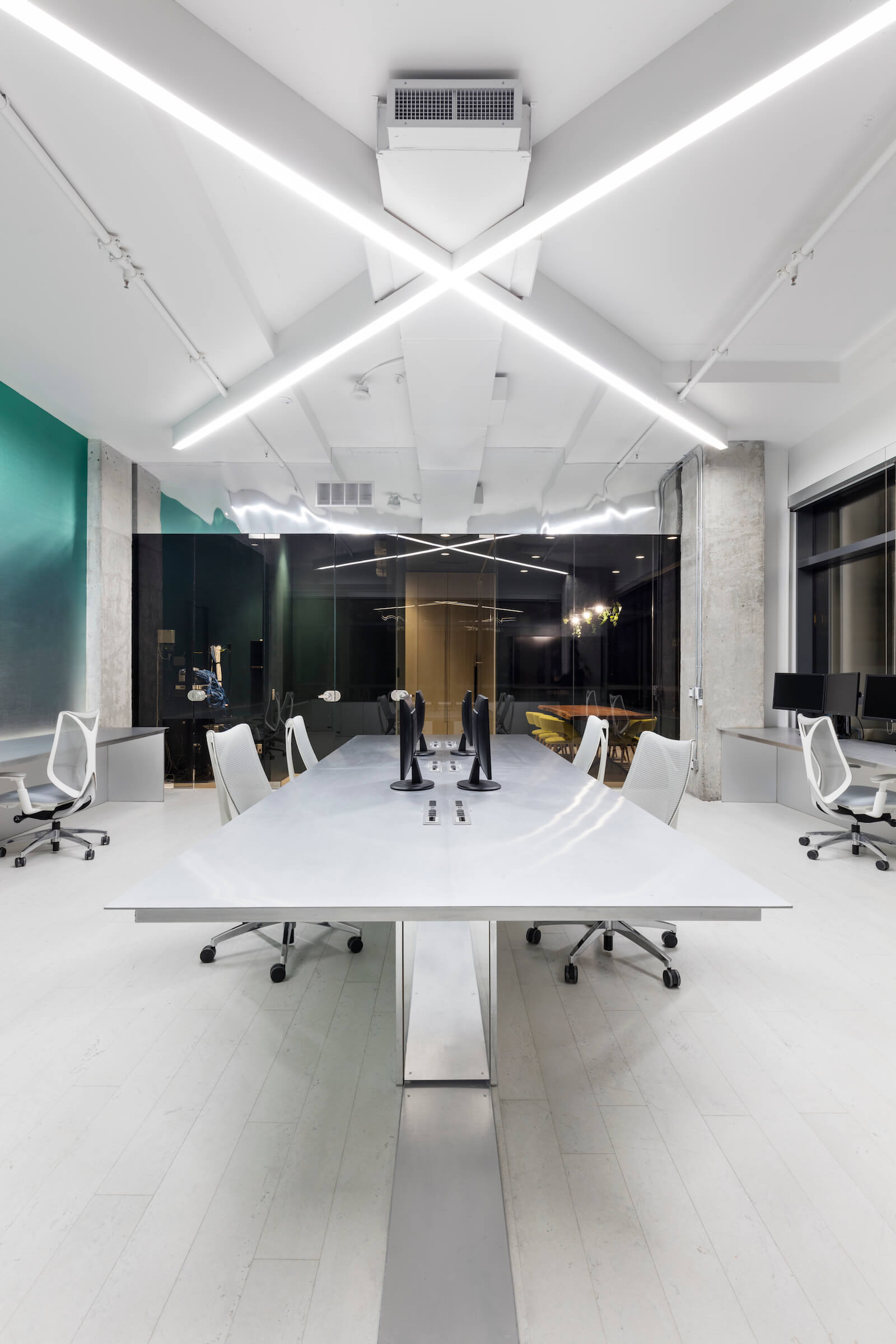 The communal workspace is bright and airy, with an X-shaped wall fixture, mirror-finish steel work tables and a gradient Calico wallcovering.

Here, the expansive open layout features white furnishings, white flooring (cushiony Division9 cork planks, which Ota likens to “paper underfoot”) and a massive cross-shaped overhead light fixture painted — what else? — white. “I liked the idea of just ignoring all the ductwork and overriding it with a giant X,” he says of the fixture, which was built out of MDF and is powered by LED strips.

The only colour accent — and it’s a striking one — is a gradient wallcovering from Calico that morph from green at the top to silvery at the bottom. “It’s a way,” Ota explains, “to connect the outside to the inside.” The main furnishings — the low-slung storage that hugs the perimeter of the room, the desking with its mirror-finish aluminum base that gives it the feel of a sculpture — are also all custom. Even the bronze-tinted smoked-glass wall that conceals the computer servers was detailed with much consideration: To vent the overheated nook, the designers cut out a small rectangle at the bottom of the glazed enclosure.

“No matter how small a project, we always do 100 per cent custom,” says Ota, whose instincts have proven spot on. Under UUfie’s direction, a series of compact rooms in an otherwise sprawling complex have coalesced into a perfectly executed — and perfectly idiosyncratic — hub of activity.