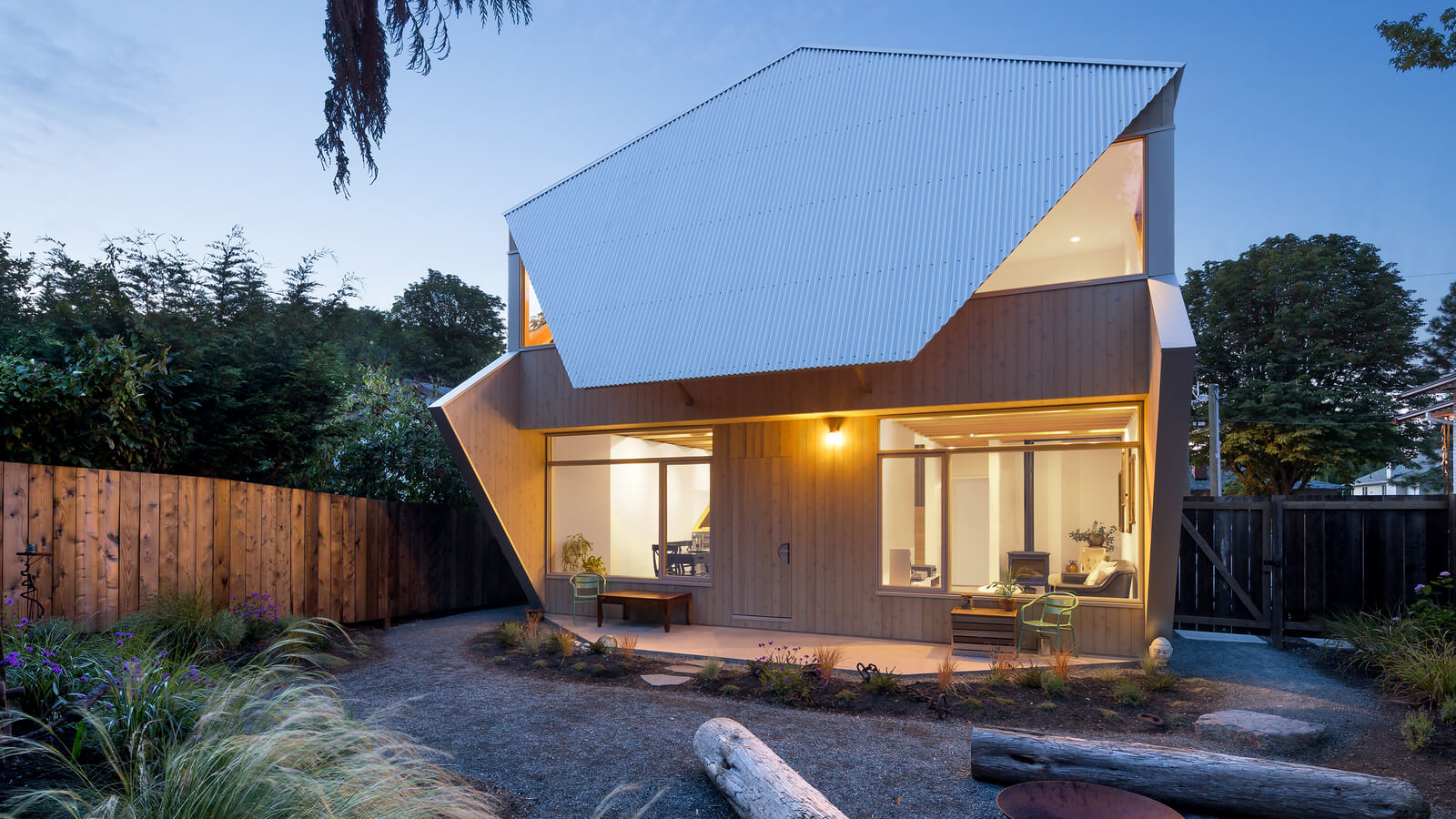 The sharply angled home in the B.C. capital takes multi-generational housing in a distinctly modern direction.

As you approach Double Header House in Victoria, B.C.’s eclectic Fernwood neighbourhood, you catch glimpses of silver between the branches of the soaring horse chestnut trees that line the street.

That silver — the hue of the large sheets of rippling galvanized aluminum that fold over the sides of the house like a sculptural double layer — suggests a piece of space-age origami. Beneath its sharply angled planes, flipper fins and beaklike protrusions, bleached western red cedar siding peeks out to counter all that cool metal. 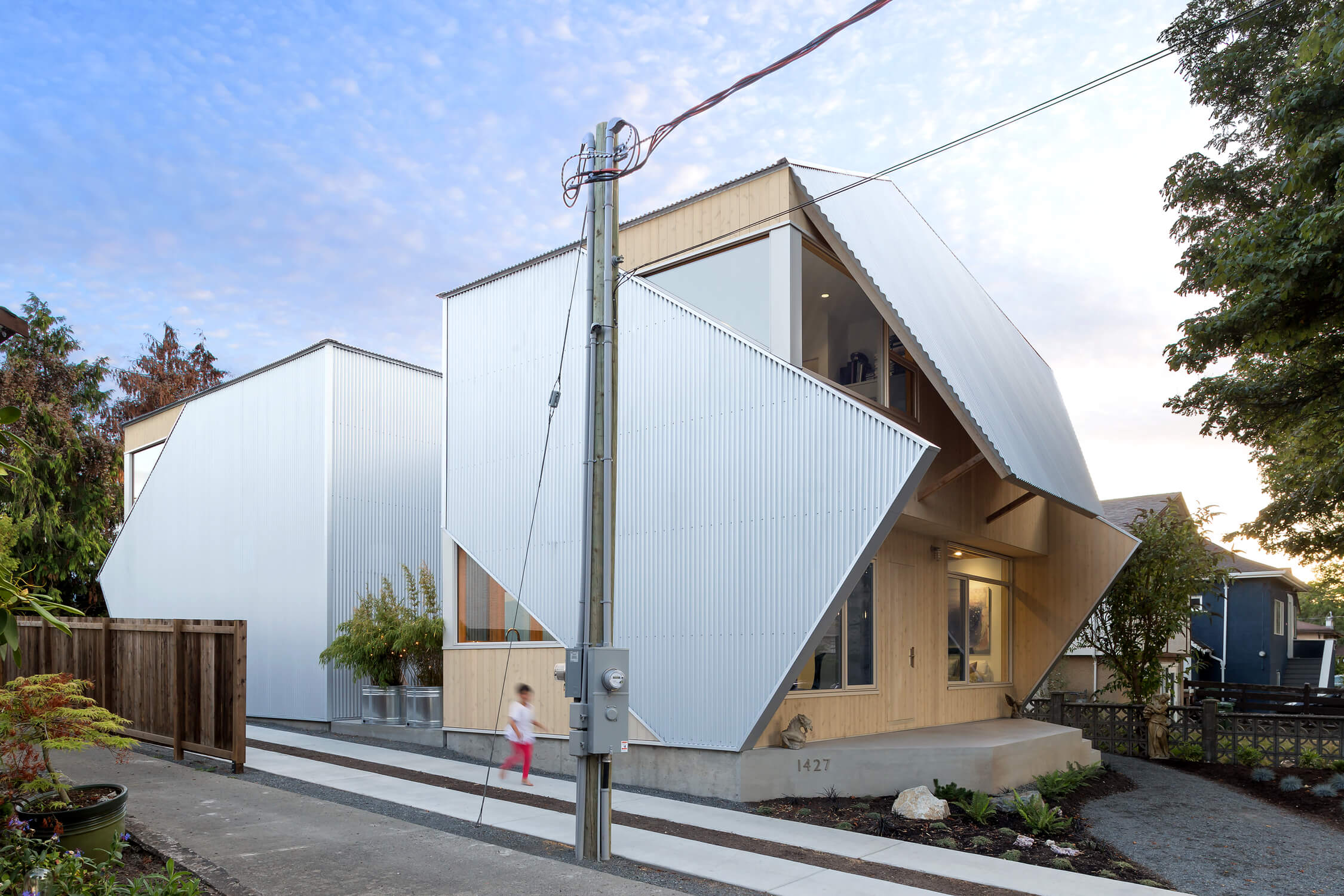 The front component of this two-volume Victoria home by D’Arcy Jones Architects is technically a suite, built to the maximum allowable size of 90 square metres. The larger, 134-square-metre rear structure counts as the main building.

Matthew Heinl and Kaylin Culligan weren’t looking to make a bold statement when they first met with contractors about renovating the property’s existing pre-1912 cottage. They simply wanted to add more space for themselves and their two children, now aged six and 15. But the cottage, with its exterior plumbing stack and crumbling foundation, had reached the end of its lifespan.

At the same time, Heinl’s parents, Anne and Russ, were contemplating a move from the nearby town of Sidney. The straightforward solution was for the family to pool its resources, build anew and live on the property together. Less straightforward would be the design itself. 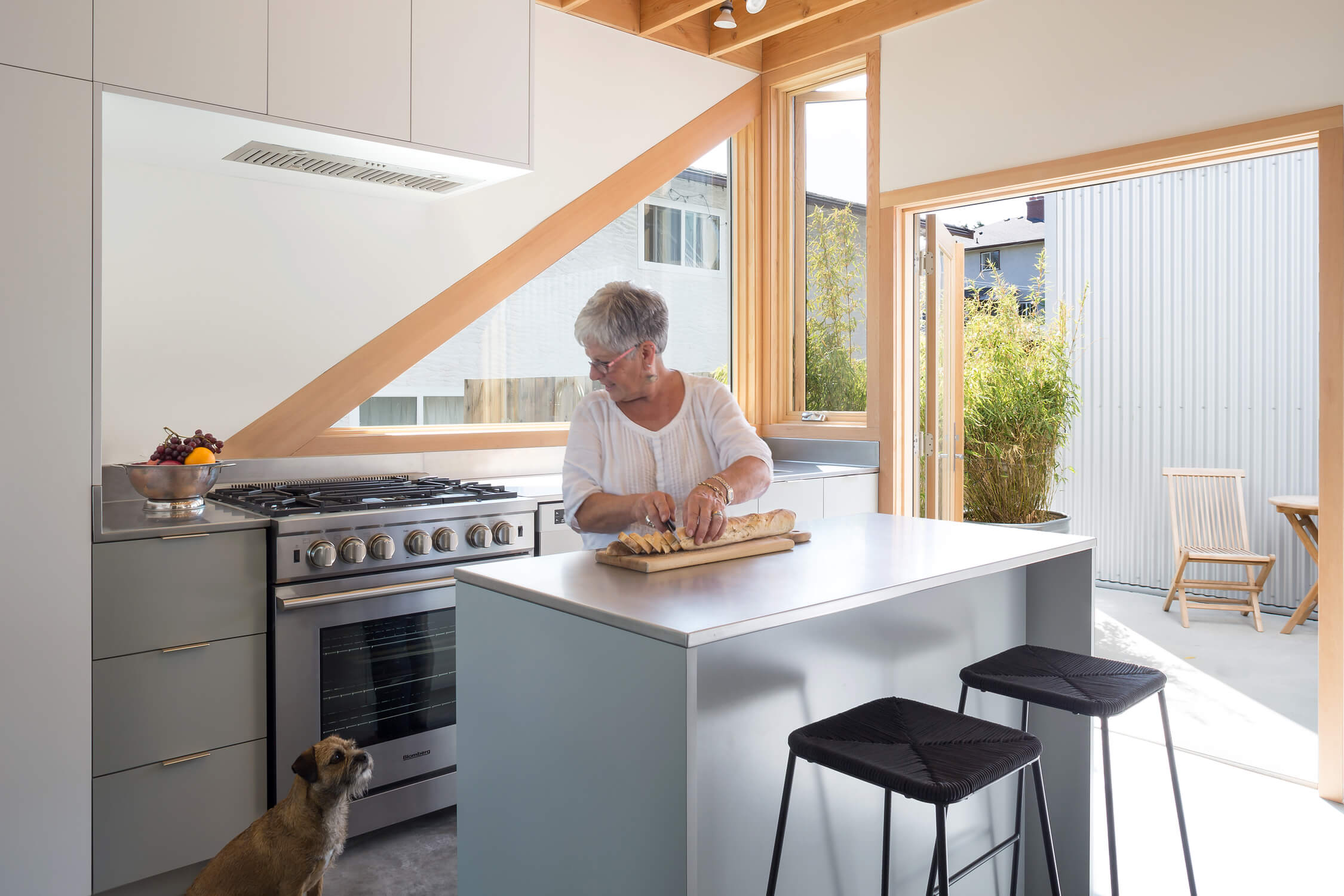 Three generations share the home: Matthew Heinl and Kaylin Culligan live in one section with their two children, while Heinl’s parents occupy the other. The areas are connected by a soundproof bridge.

The zoning on the 13-by-35-metre lot wouldn’t allow for a duplex, only a main building with a secondary suite. And digging out a basement would significantly increase the project budget. The contractors soon reached out to D’Arcy Jones, an architect who runs an international practice in Vancouver. Jones says the discovery that porches in Victoria do not count against allowable floor space led to an exploration of form. 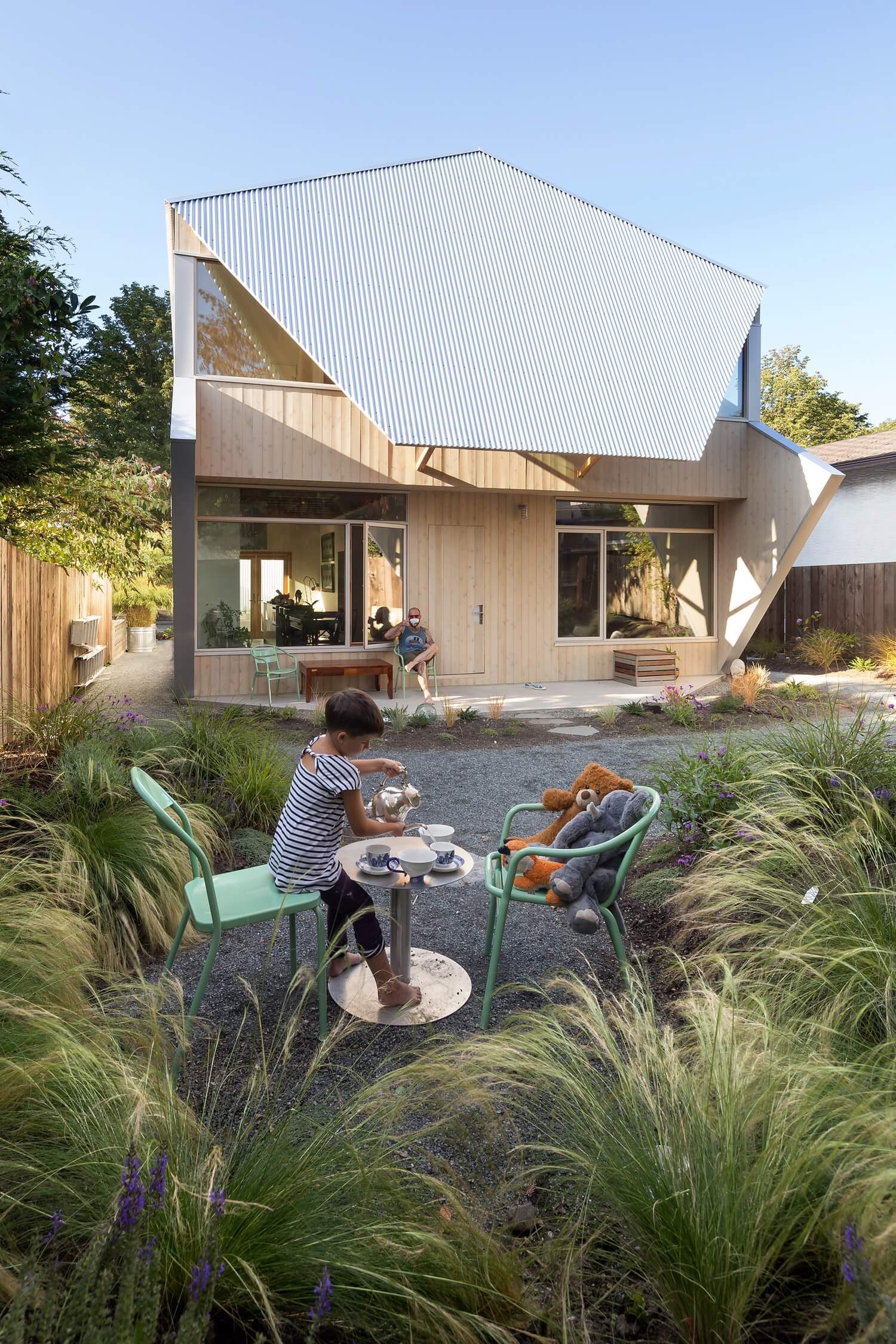 Folded sheets of galvanized aluminum cascade down the sides of the house, which is clad with bleached western red cedar siding.

Ultimately, the front and back facades of the house would be identical, each with its own covered outdoor area and the feeling of a traditional front entrance. In the cinched midsection of the building, a soundproof airlock would connect the two volumes, allowing the families both freedom of movement when open and privacy when closed off.

Critically, the layout would avoid a side-by-side orientation and the narrow interior spaces that would come with it. “The sense of width here is more like a typical house,” Jones says, adding: “To say that we all want to live in apartments is great in principle, but the small-scale grain of a house is still what feels good to so many.”

Strategically placed cutouts and wood-framed windows, along with that distinctive metal overhang, carefully edit views of neighbouring houses and hydro poles while still allowing natural light to pour in on every side of the building — an important consideration in the grey-toned Pacific Northwest. “The light in here is beautiful all the time,” says Anne. 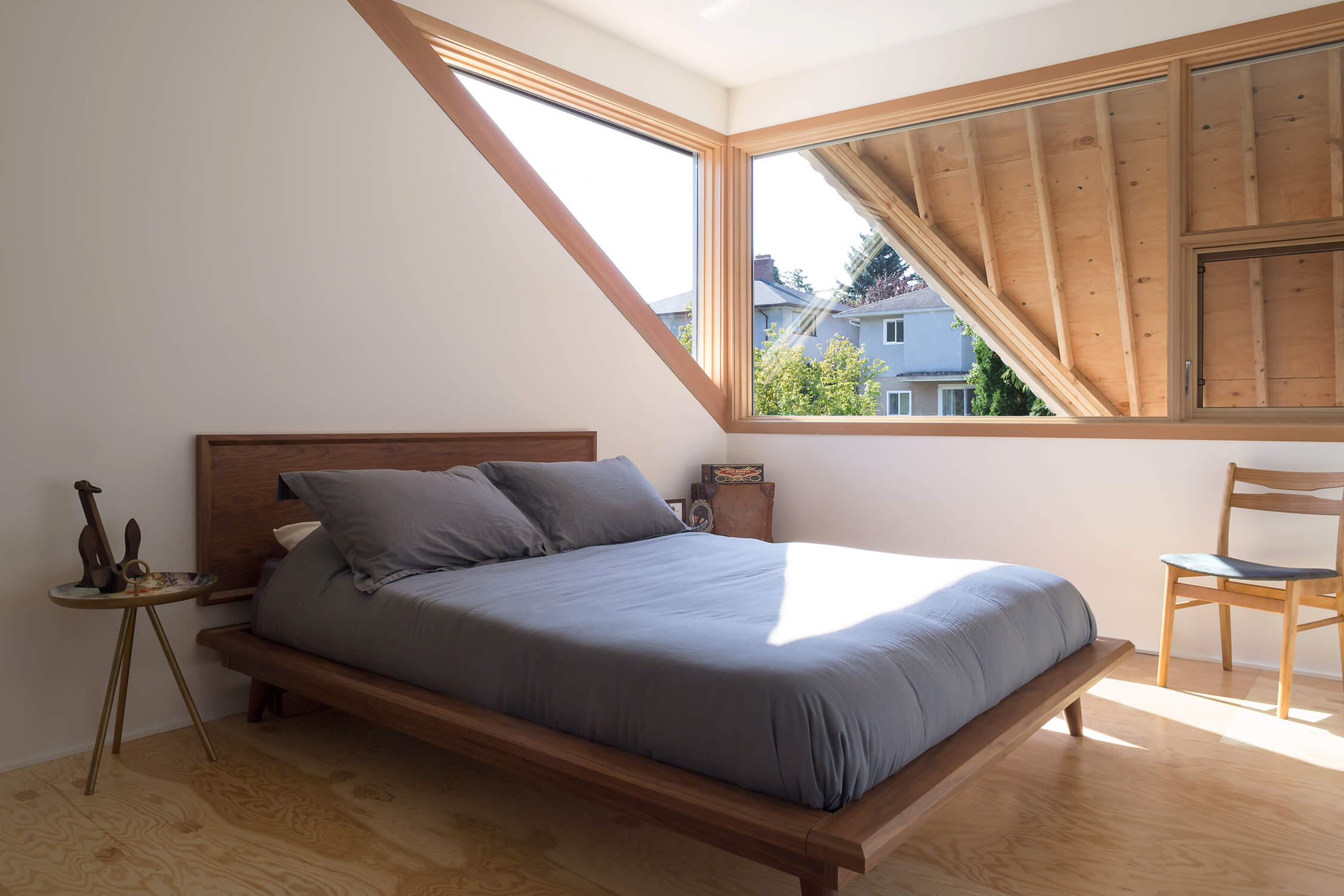 Carefully placed windows and cutouts help control views of nearby homes and hydro poles, all while flooding the interior with light.

The interiors have a spare, almost unfinished quality. At the roof level, prefabricated trusses and two-by-10 ceiling joists are left exposed to create visual interest and a greater sense of height; they also allow a passive transfer of heat from the freestanding gas stoves to the upper level.

Concrete flooring with a trowel finish creates a subtle marbled effect (“It’s just a nicer version of what you’d have in your garage,” says Jones) and runs to the exterior, linking the architecture to the naturalized outdoor landscape by Bianca Bodley, principal of Biophilia Design Collective. 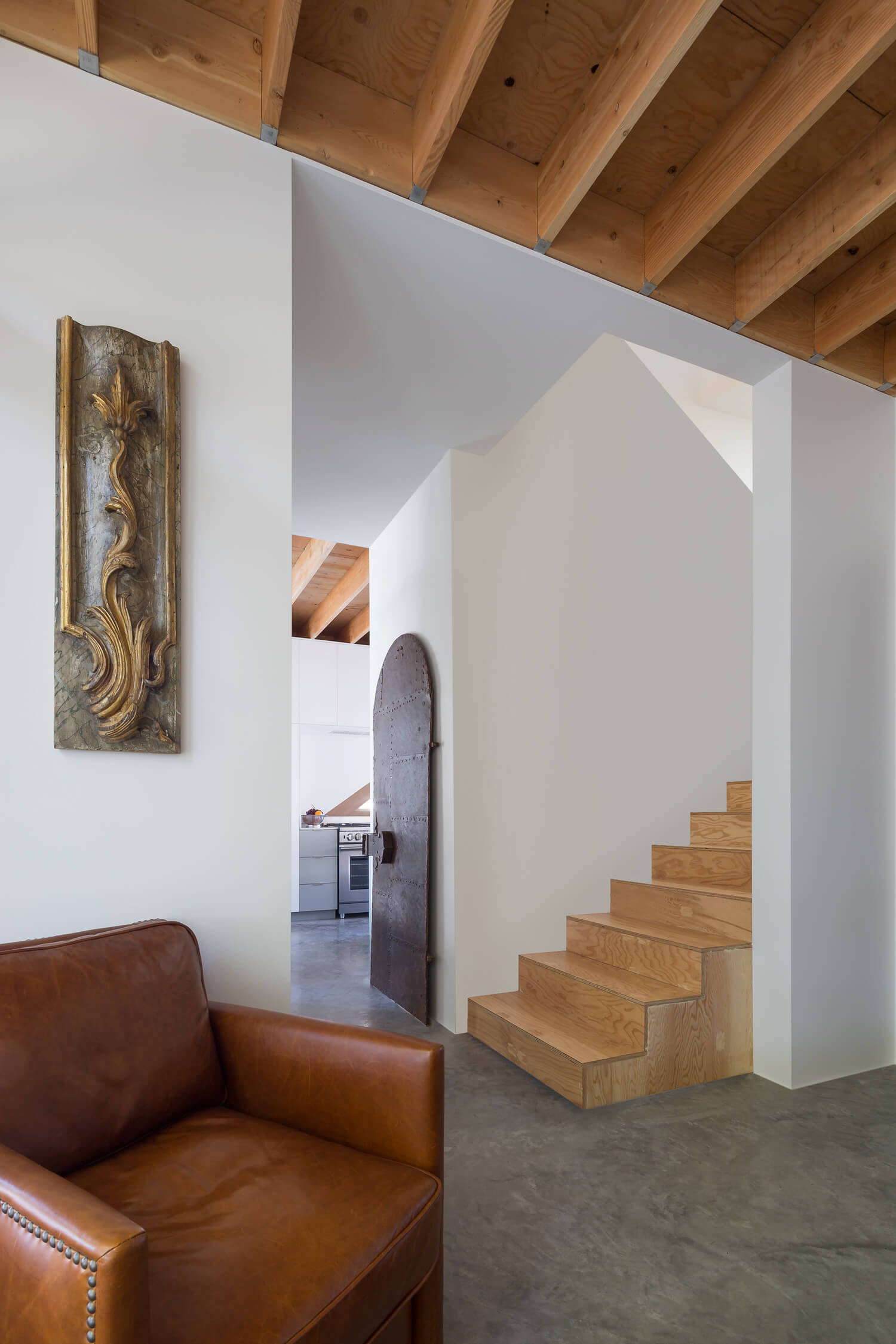 Construction-grade materials, such as trowel-finished concrete for the floors, define the spare interiors. “This is the closest we’ve come to a house that could be hosed down on the inside,” says architect Jones. “You probably shouldn’t, but you could.”

A roughly half-metre perimeter of drainage rock contends with the rainfall that pings and runs off the roof. Beyond it are winding crushed-gravel paths that extend around the property. “Every part of that landscape had to be multi-functional,” says Bodley.

In the front yard, the paths lead to beds planted with black mondo grasses, a Seiryu Japanese maple and several varietals of ferns and blue fescue; in the back, they meander toward a relaxed fire bowl area, a chicken coop and beds of undulating woodland sage, Munstead lavender, Mexican feather grass and pheasant’s tail grass, among others. All of it will be left to grow wild and lush over time, softening the edges of all those dramatic folds and planes. 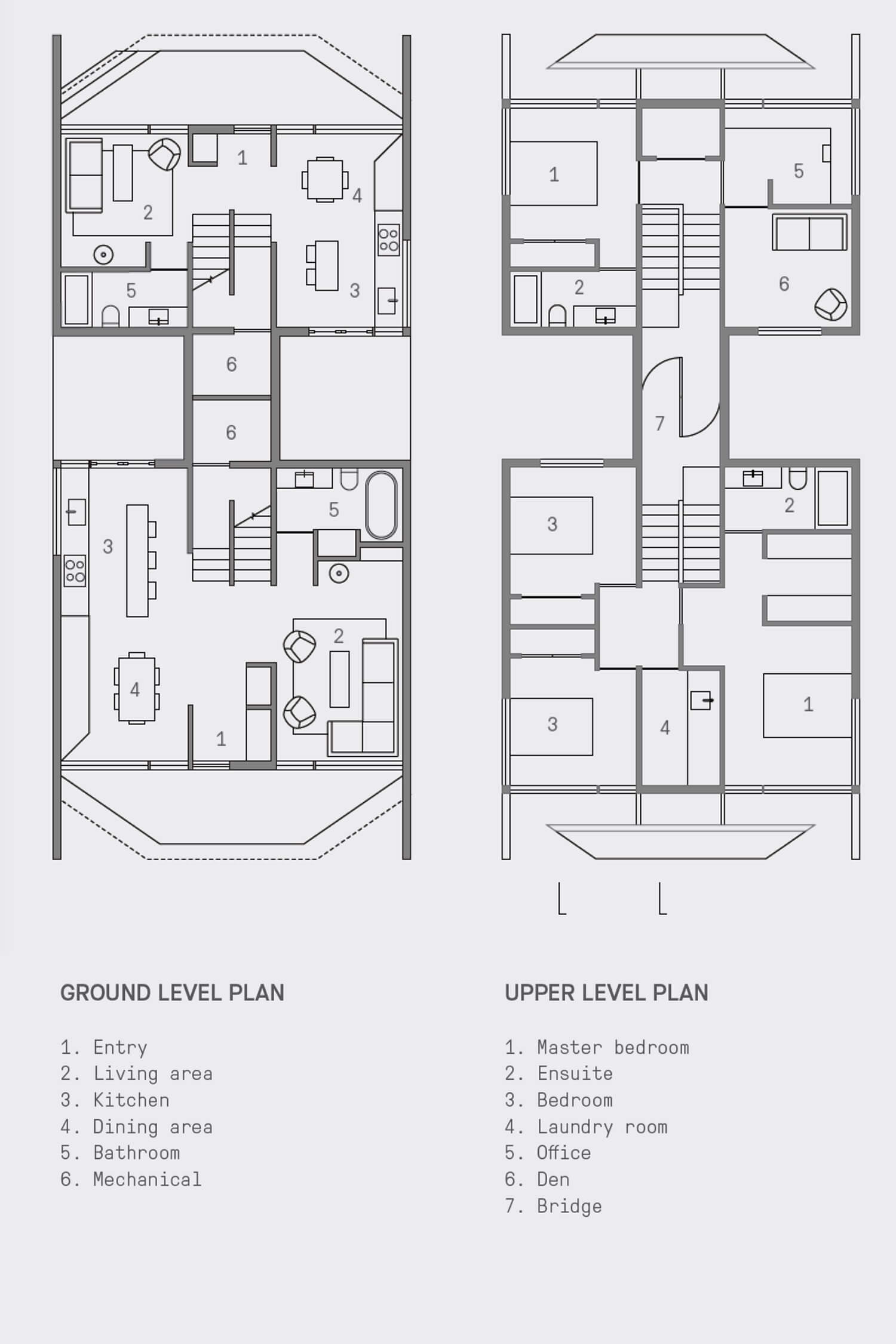 The sharply angled home in the B.C. capital takes multi-generational housing in a distinctly modern direction.