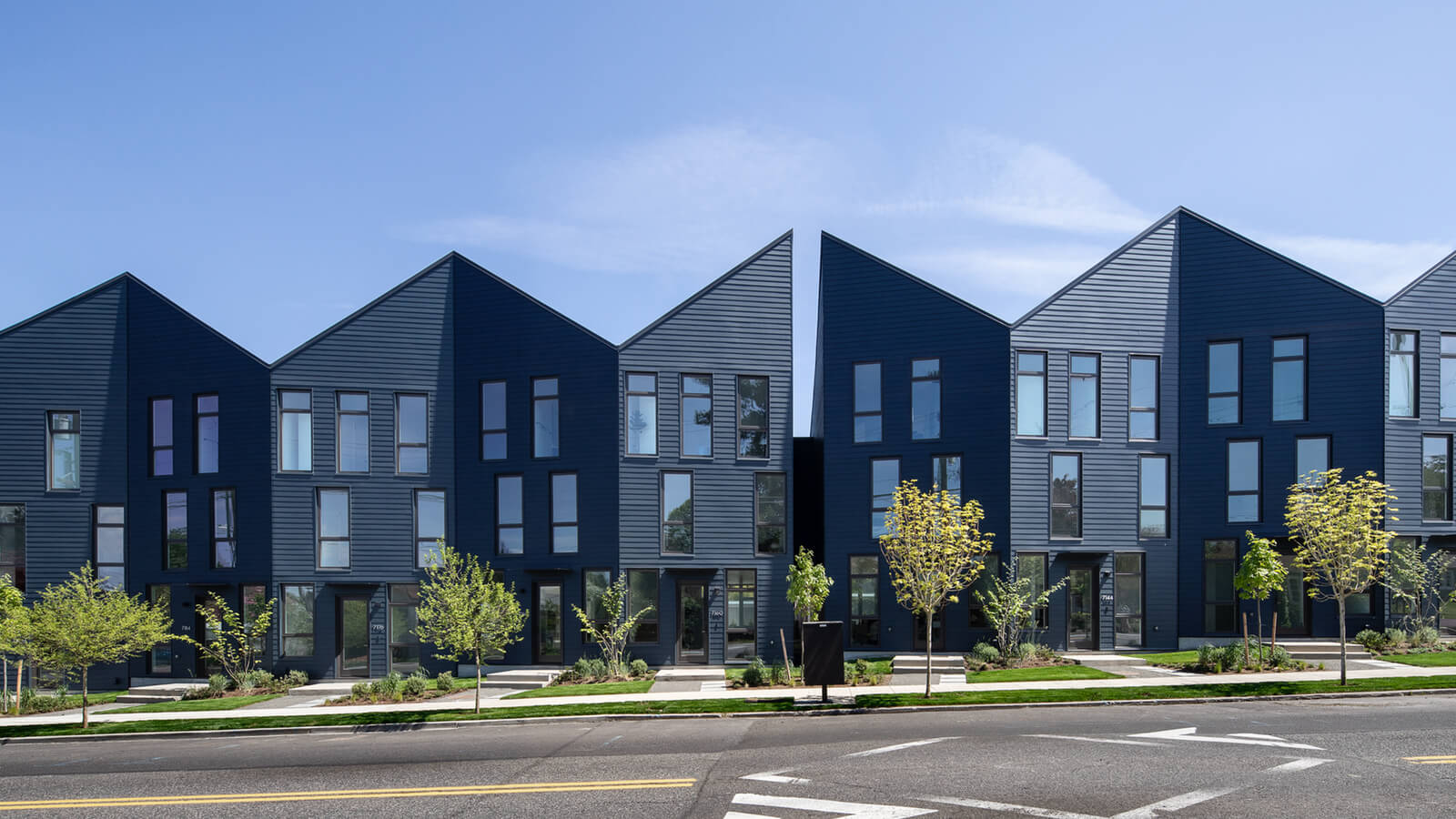 The project, by Waechter Architecture, benefits from pleated surfaces that lend personality.

To hear Ben Waechter describe it, origami is fundamentally an exercise in generating character from a plain surface. “You start with a flat piece of paper that has no texture,” the principal of Waechter Architecture says of the centuries-old Japanese art of paper-folding, “and you go through this process of folding it into shapes, which gives it form and shadow.”

Despite working with a palette of inherently unexciting materials, Waechter evokes texture and shadow in abundance at Origami, a multi-unit residential project completed in the summer of 2019 in Portland, Oregon.

The 50-year-old architect, who completed a three-year stint at Renzo Piano Building Workshop in Genoa before founding his eponymous firm in 2007, is in the middle of a boom in such projects led by Origami. The 12-unit, U-shaped development on the city’s north side constitutes a higher-density project in a district where a similar footprint would typically fit only four single family homes. And it required solving a pair of challenges. 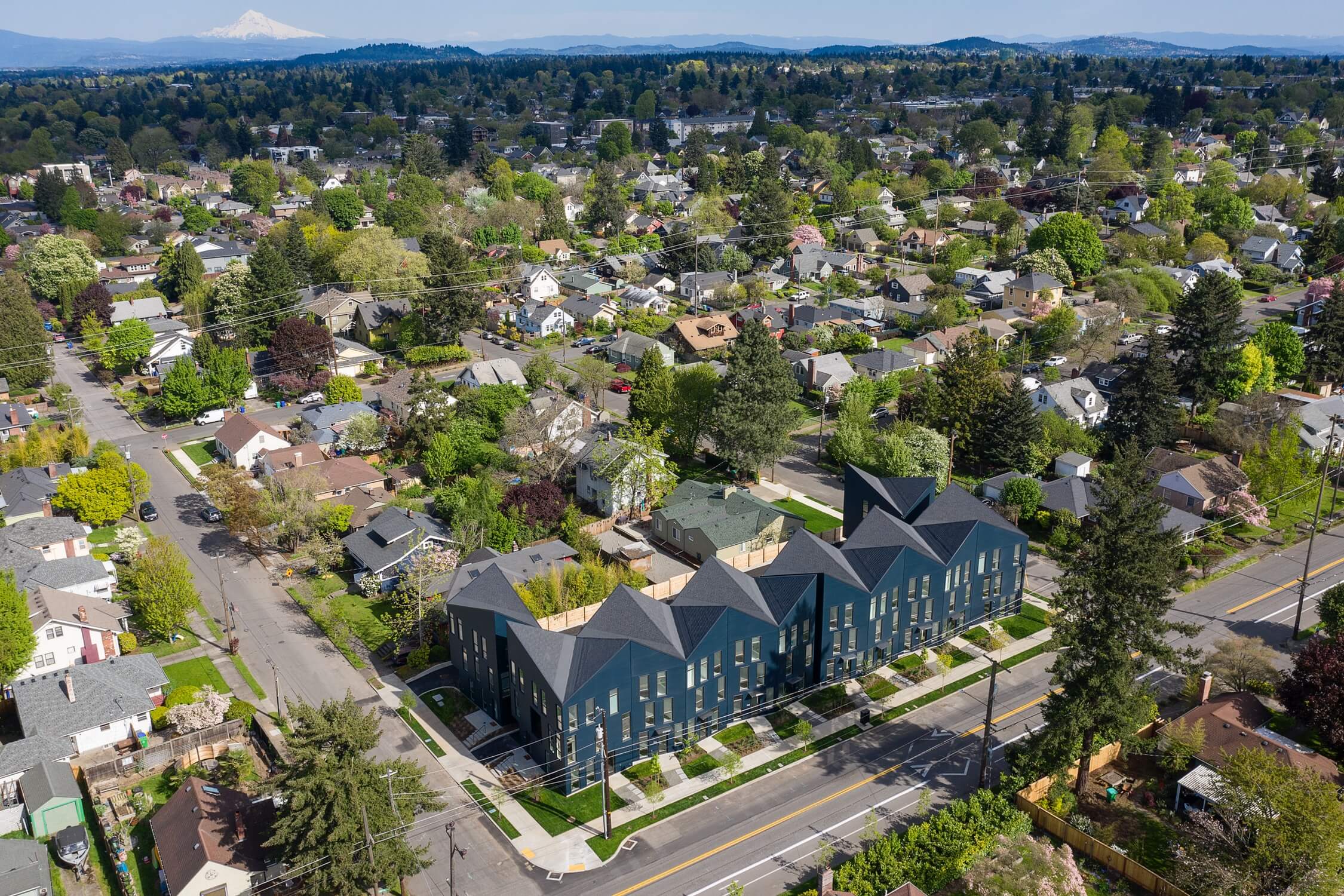 Configured in a U-shape, the 12-unit Origami development was designed to fit into its Portland neighbourhood.

First, it had to marry new townhouses, built at the maximum height allowed by local code, with the neighbourhood of Piedmont’s existing vernacular — an assortment of low-slung bungalows and Cape Cods with pitched, gabled roofs. Second, it needed to create the attractive textures and forms desired by local developer Project^ while mitigating costs in an area that can’t command the sale prices of homes nearer downtown.

Pedestrians and cyclists on North Vancouver Avenue glancing skyward can perceive that the primary gesture accomplishes both tasks: A unique pleated roofline gives each individual row house its own character while providing the block with a unified form. While the peaks and valleys are consistent with the neighbourhood’s characteristic pitched roofs, the angles come as a surprise. 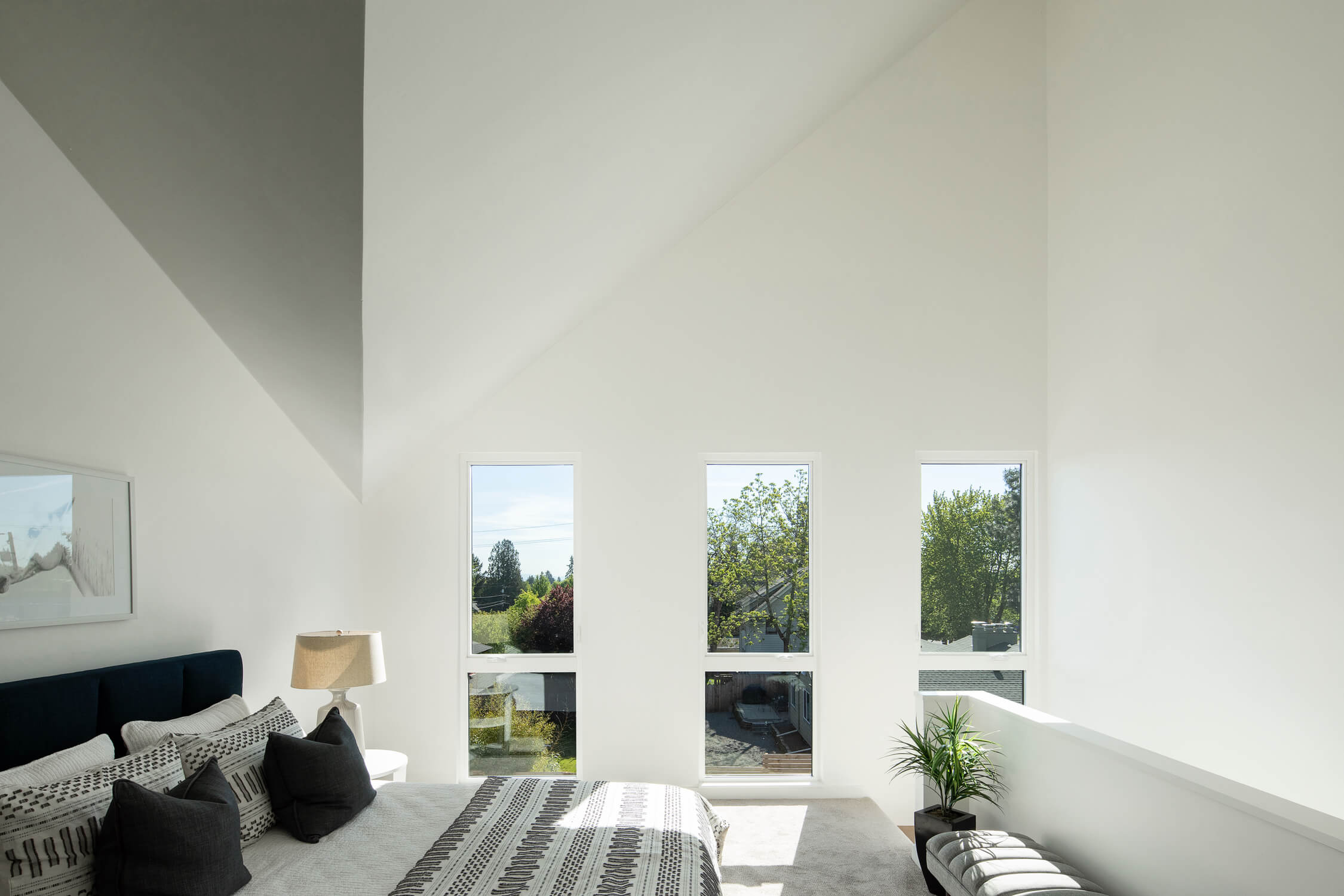 The townhouses’ pleated roofs are experienced throughout the white-painted interiors as dramatically sculpted ceiling planes.

Centre ridge beams run diagonally corner-to-corner along each unit, alternating between peaks and valleys to create what Waechter calls a kind of “butterfly roof.” While the roof is clad in simple asphalt shingles, the play of light and shadow achieved between these fluctuating triangular planes provides a sense of drama.

These folds are replicated more subtly in the buildings’ street-facing surfaces. The front of each of the 10 units along North Vancouver Avenue sits at a slightly different orientation, offset at alternating concave and convex angles.

In terms of proximity to the sidewalk, however, the facades remain basically in sync with the single-family dwellings nearby. “We think of the street as a room, and buildings as walls to this room,” says Waechter. “It was important for us to align with the houses on adjacent blocks and adhere to that urban room-making.”

“Each row house has its own character. It was important for us to align with the houses on adjacent blocks. We don’t do architecture of novelty.” 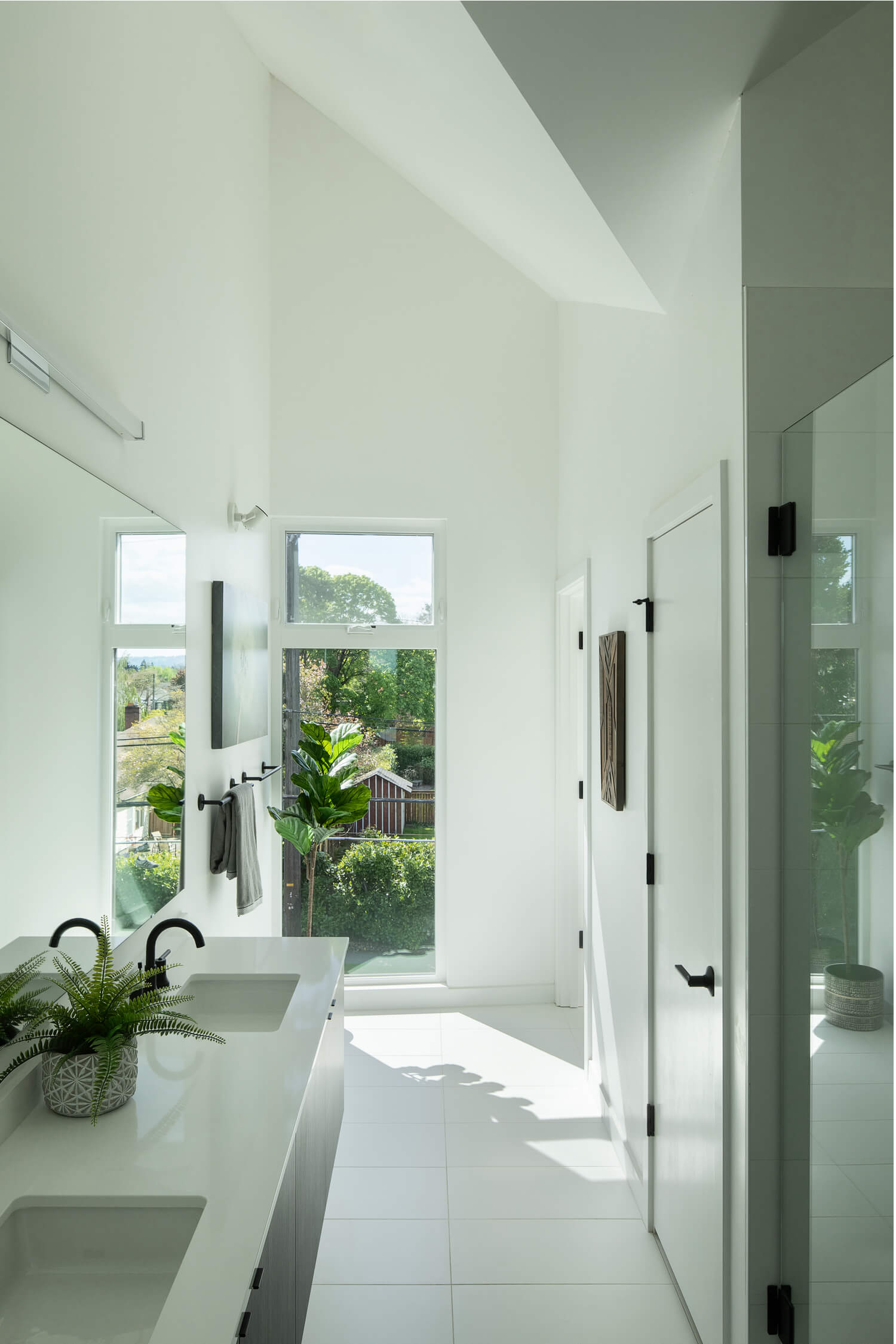 The architects’ choice of siding material allowed them to achieve these subtle push–pull flexions. Hardie fibre-cement lap siding and trim is a durable, cost-effective option, but on its own it provides little in the way of texture or style.

“We wanted to show it for what it is,” says Waechter, “and then add shadow relief in a more authentic way through the form of the building.” To create a clean seam from one plane to the other, the architects devised a special three-part detail at each joint in the folded wall, where a hidden waterproofing element is tucked between two J-profiles that receive the siding material. 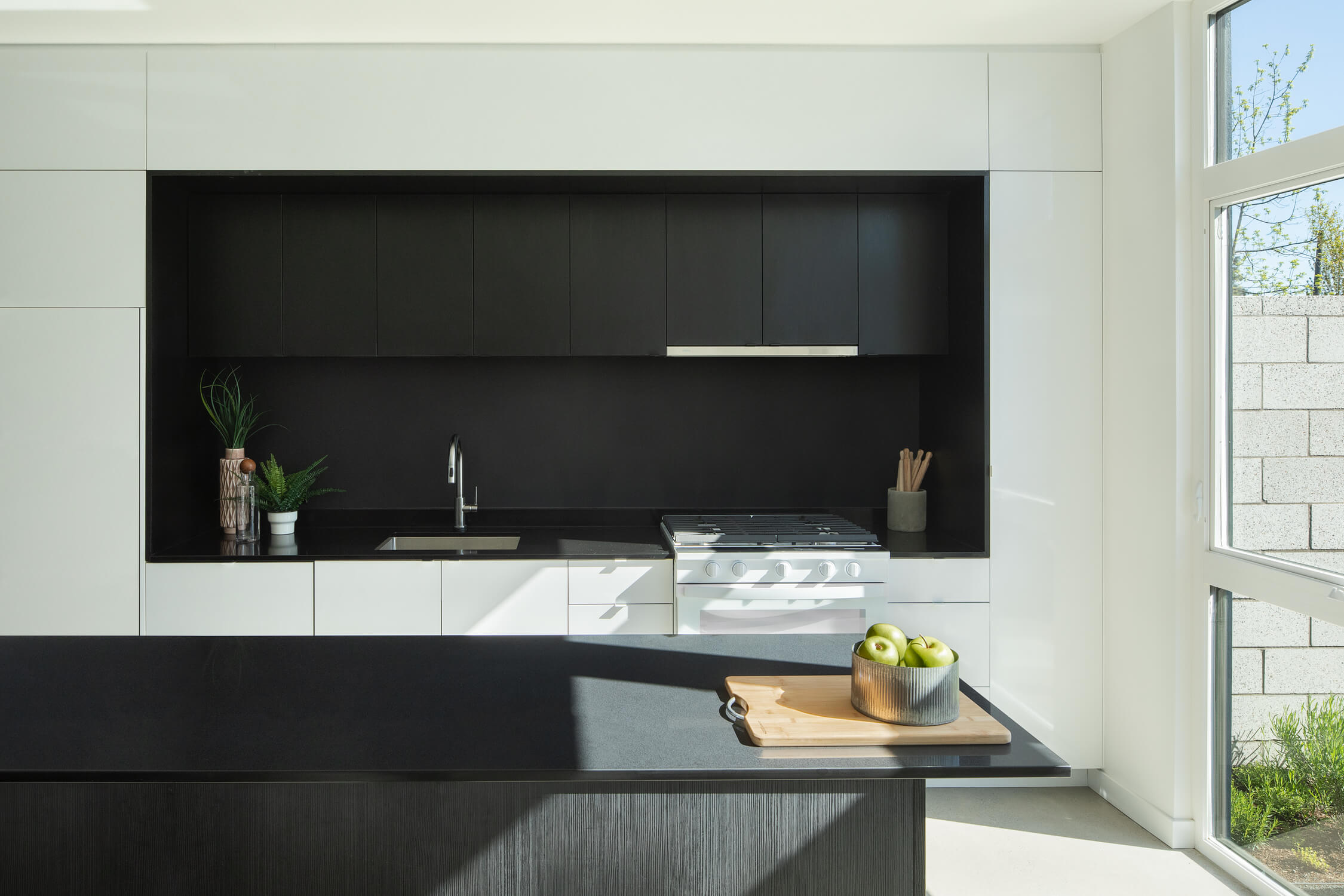 Inside, white surfaces contrast with black finishes, as in the case of the kitchen.

“Those details allow the building to take on different angles depending on where they occur,” says Waechter, “so sometimes it’s concave, sometimes it’s convex, sometimes it’s an angle that you wouldn’t be able to achieve with a standard piece of trim.” All these exterior folds bring a sense of movement and play to the townhouse units’ interiors.

The lower two levels feature floor-to-ceiling windows and standard 2.44- to 2.74-metre ceilings. But climbing the staircase to the third floor master suite “feels special,” says Waechter. There, the folded roof form produces dramatic vaulted ceilings that rise to heights of 4.88 metres and pitched surfaces that bounce warm light throughout the space. 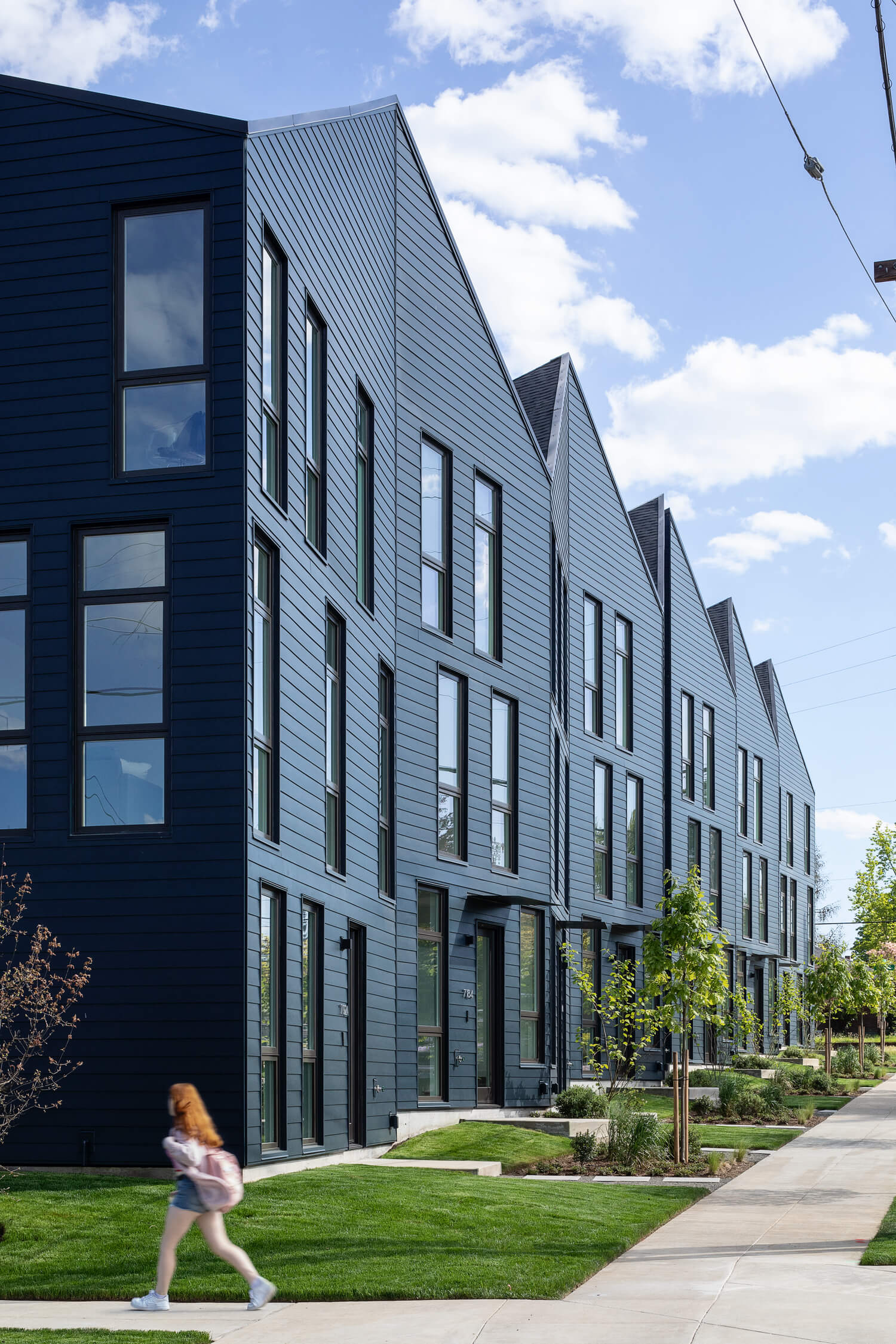 Available in three layout types (the Plane, the Point and the Pleat), the townhouses echo surrounding single-family homes in shape and scale.

Ultimately, Origami’s bold shape — born of a push to create multiunit housing that fits both the neighbourhood setting and the project’s budget — inspired its connection to paper-folding and not the other way around. “We don’t do architecture of novelty,” says Waechter. “Only via a pragmatic effort of trial and error did the final form become reminiscent of origami.”

The Pleats and the Plans 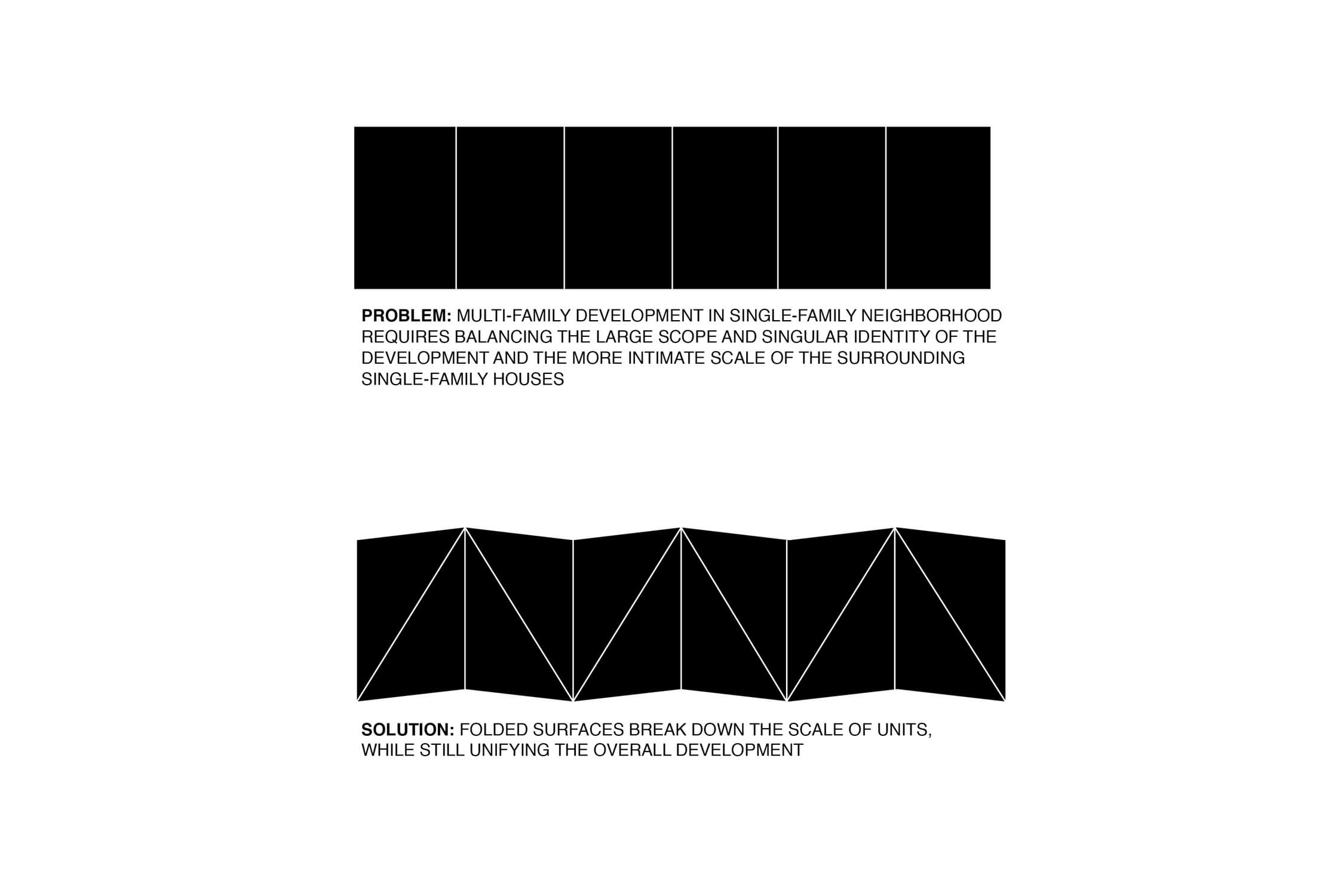 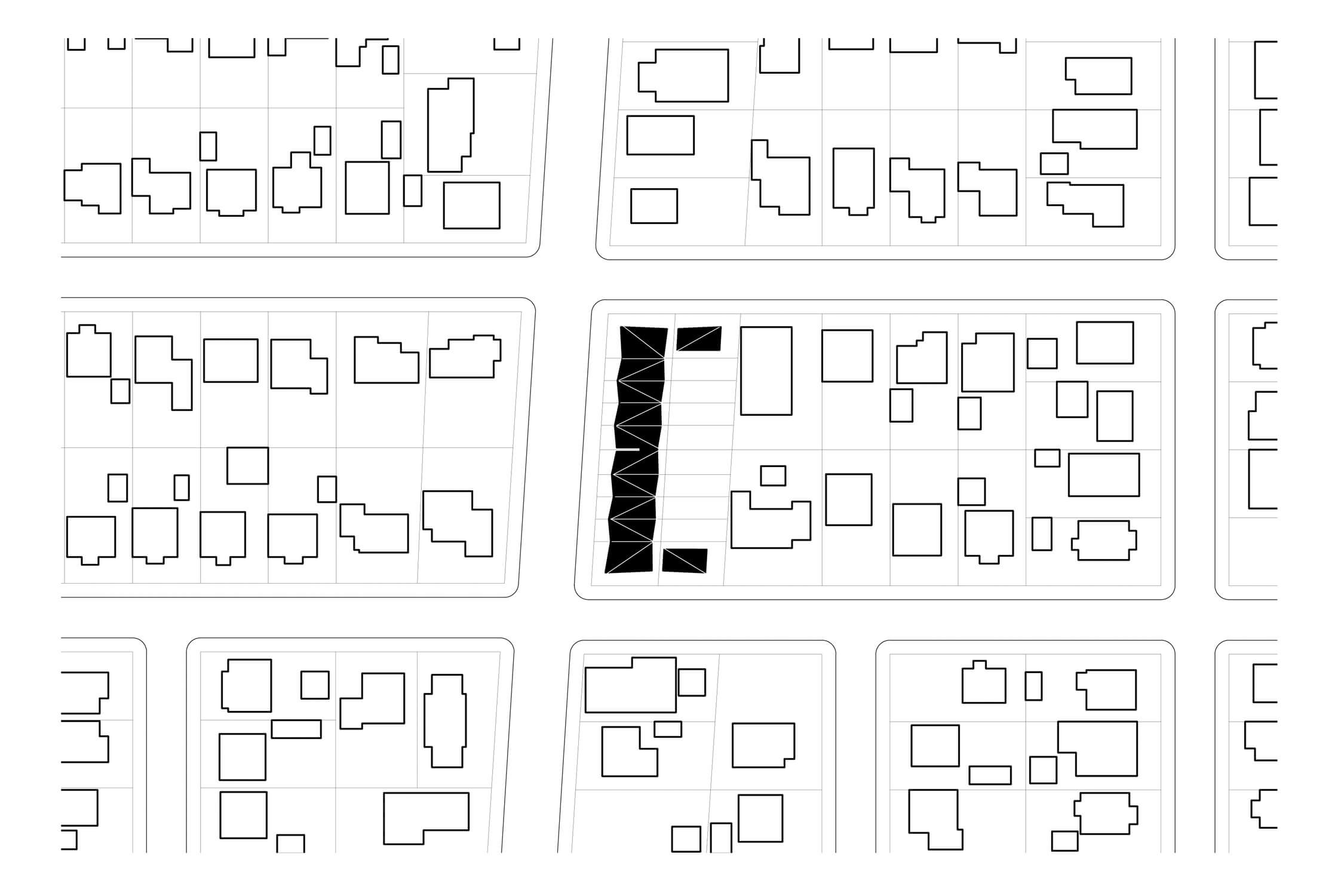 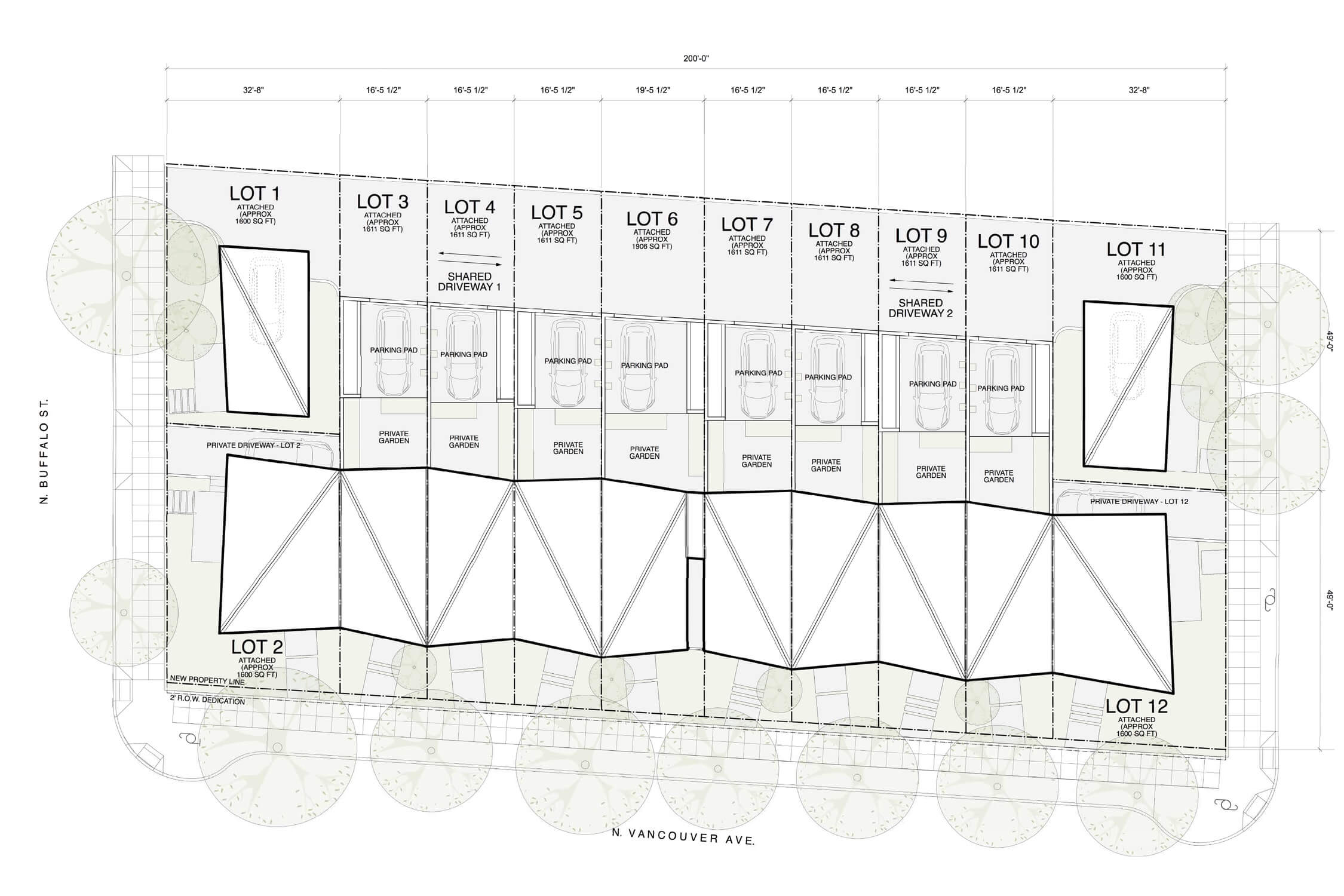 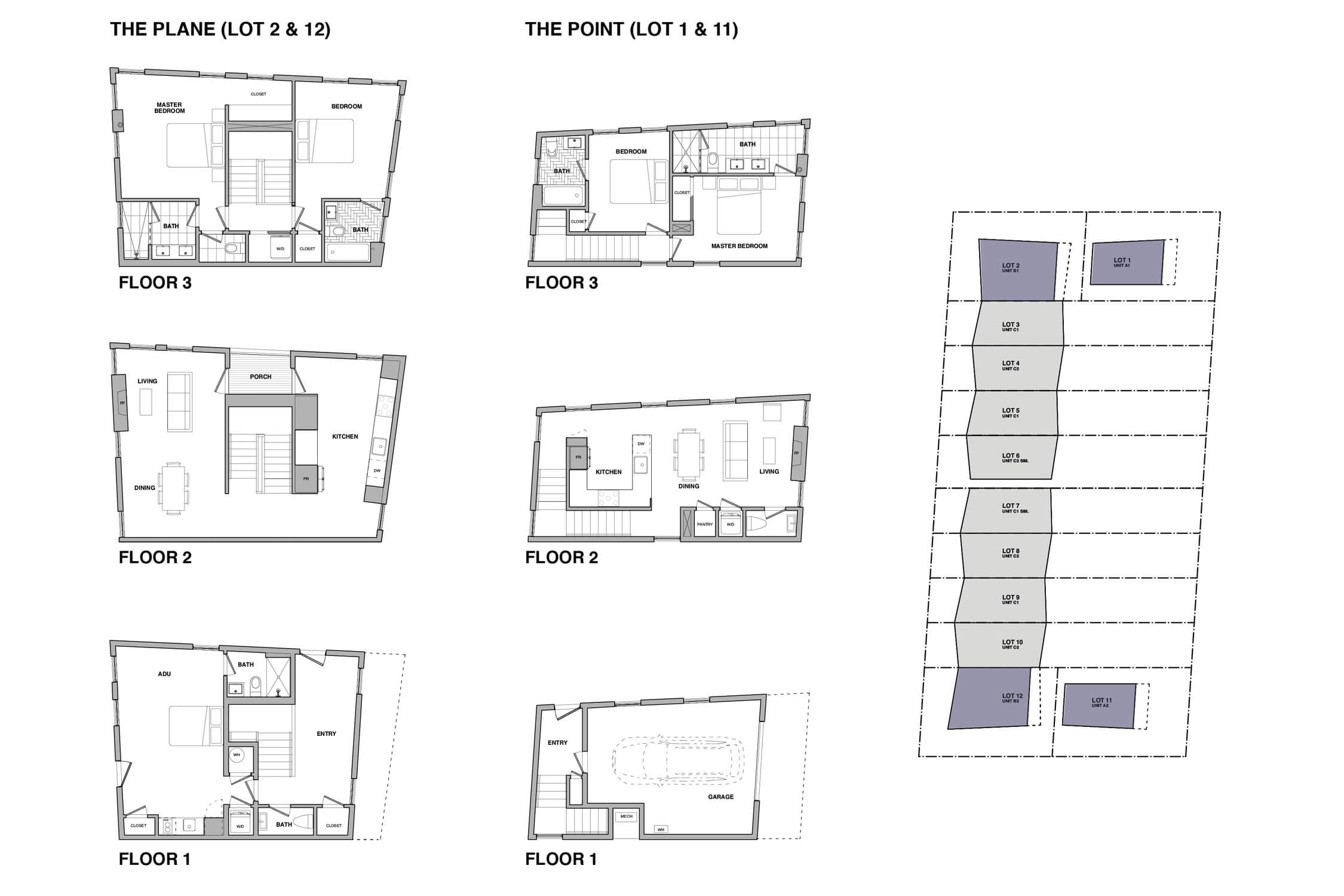 The project, by Waechter Architecture, benefits from pleated surfaces that lend personality.