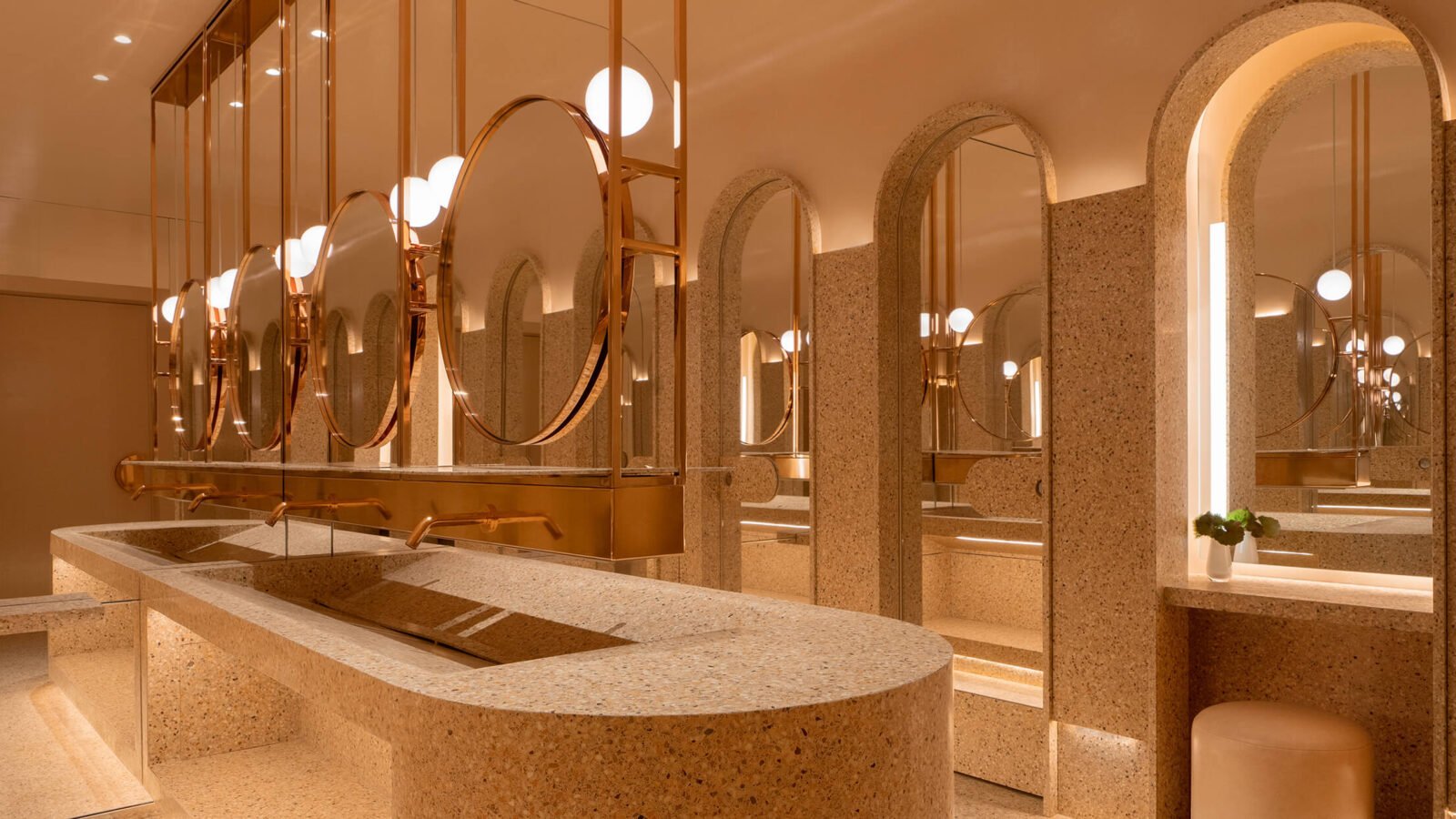 A sprawling 1,268-square-metre restaurant and social hub on the third floor of Montreal’s Four Seasons Hotel, Marcus was conceived by local studio Atelier Zébulon Perron as an experiential journey. That includes the men’s and women’s restrooms, which are similar in their detailing and calculated use of reflection, but offer strikingly distinct effects. While taking the perfect selfie may be the most common use of the bathroom mirror these days, principal Zébulon Perron says that, in this case, the reflective material provided an opportunity to “open up the spaces” and create “surprise within the project.”

Building on the refined palette of Marcus’s dining spaces, the women’s washroom is replete with rich, warm hues and crisp detailing. Pale pink terrazzo makes up almost every element of the space, including a central vanity that seemingly floats atop a halo of recessed light and boasts a sloped trough sink. “One thing we did in both bathrooms,” says Perron, “was use mirrors to create an infinity effect.” 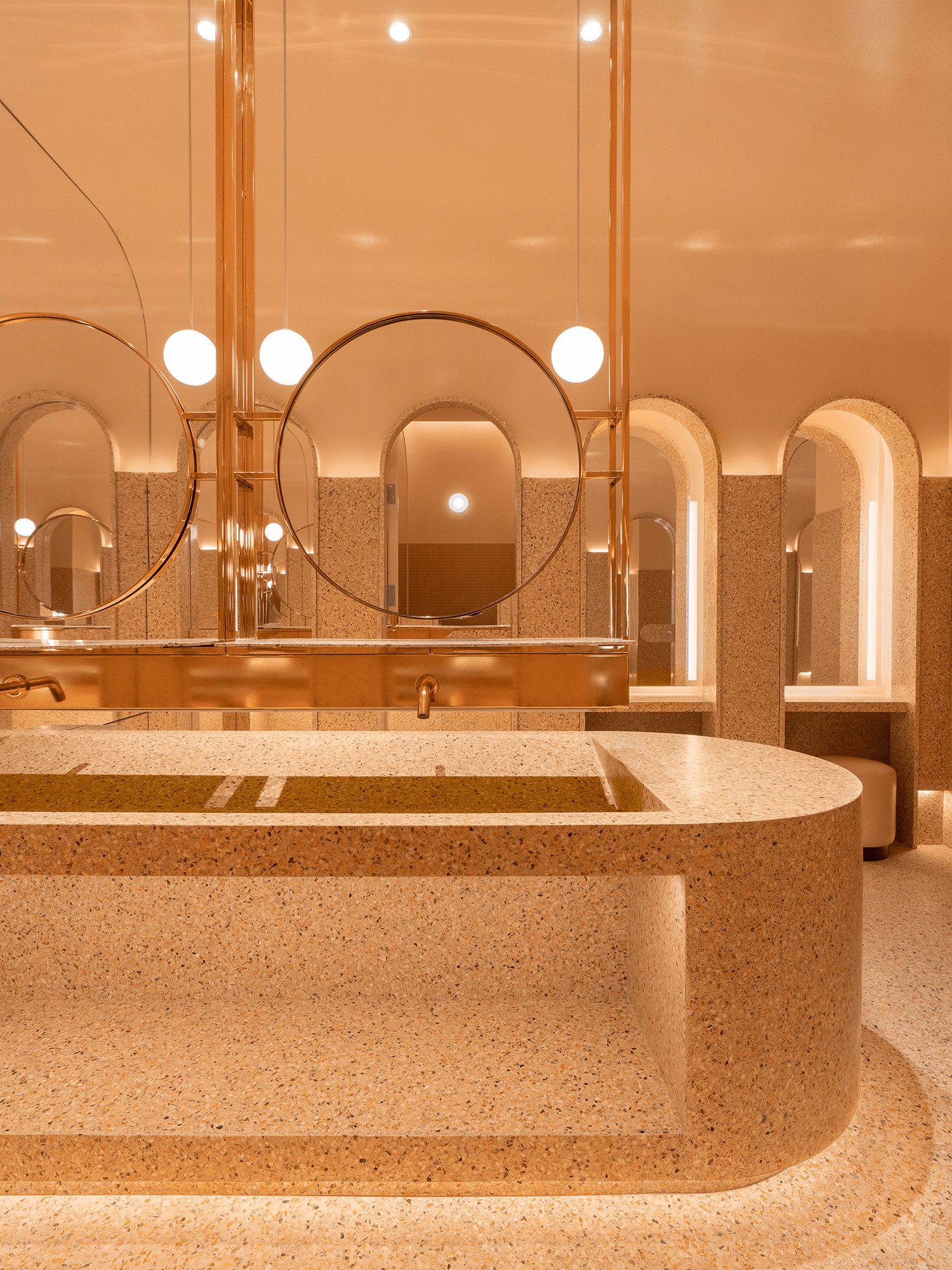 Here, the monolithic custom basin was positioned against a floor-to-ceiling mirror wall (not shown) to duplicate its rounded form. Above the unit, a suspended copper-plated structure incorporates sleek faucets while concealing wall-fed plumbing in a slender arm. Lighting fixtures and two circular mirrors are also integrated within its finely detailed framework to create “a notion of luxury that is about the moment of interaction.” 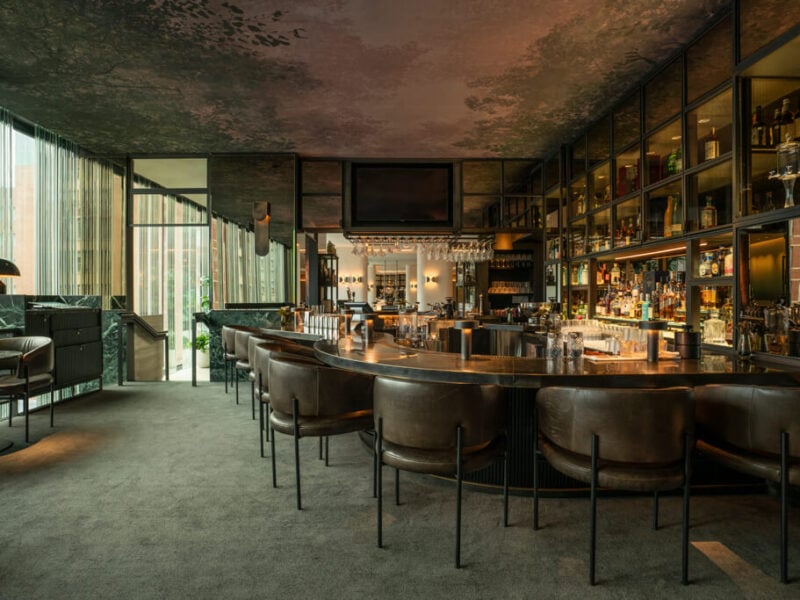 In the men’s lavatory, meanwhile, jet-black Grand Antique marble with thick ribbons of white veining clads the floors, walls and a crisp rectangular basin, transforming the space into an inhabitable work of op art. As in the ladies’ room, two carefully situated parallel mirrors reflect what appears to be an almost endless corridor of individual stalls illuminated by concealed lighting; custom globe pendants built by Montreal’s Lambert & Fils (which also supplied luminaires throughout the project) run down the centre.

“We wanted to make sure that the way you perceive the space and its real, physical limits were two different things,” says Perron. “When you walk into the washroom, it’s a very surprising and immersive experience.”