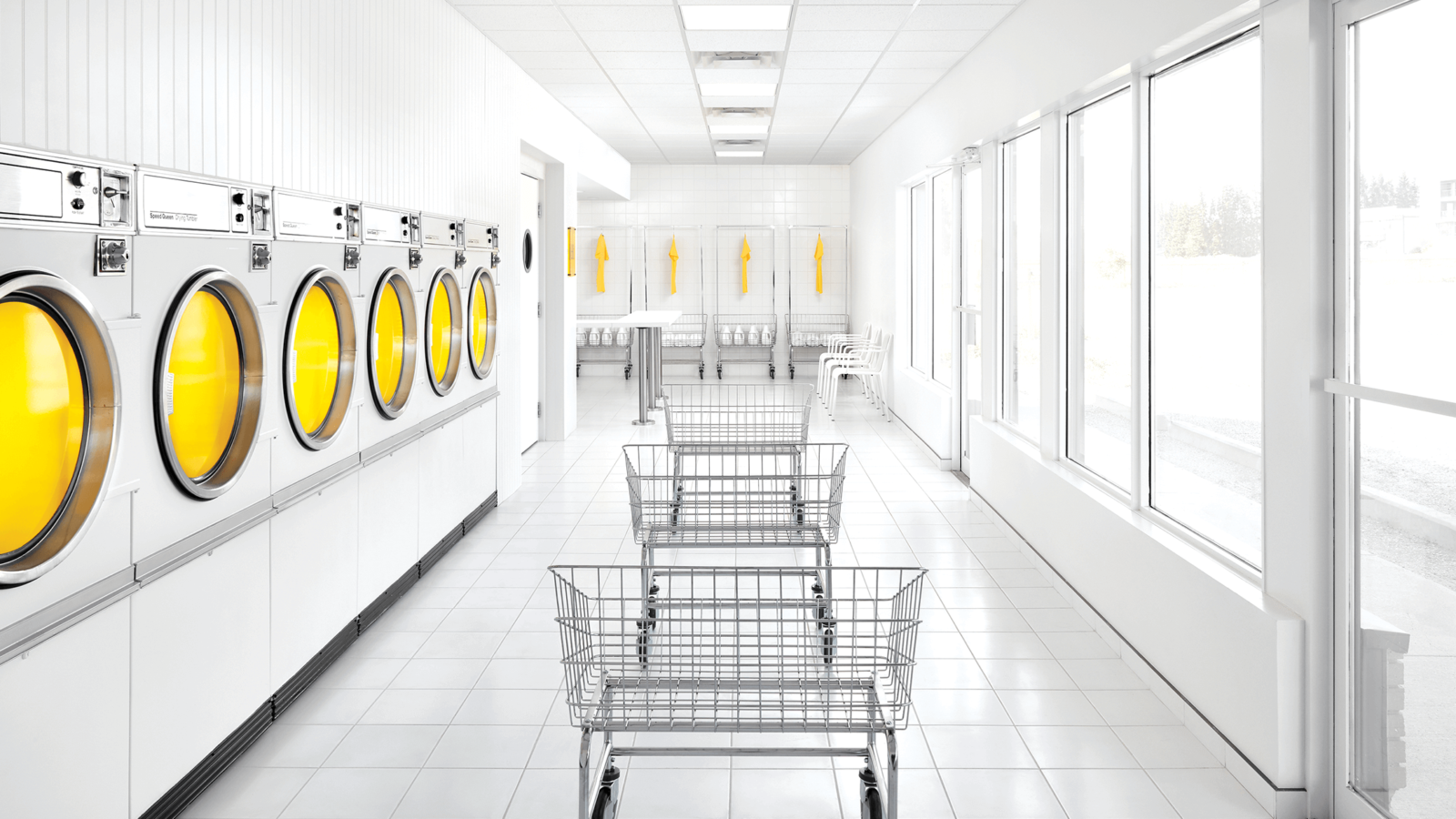 Designed by Toronto studio I-V, LAB001 is entered through a fake laundromat.

Housing a convenience store, a travel agency and a Chinese restaurant, a strip mall in the city of Lloydminster, Saskatchewan, appears just as unassuming as any other. Only this particular mall is also the location of Kolab Project’s flagship cannabis shop, LAB001, which masquerades as a laundromat. 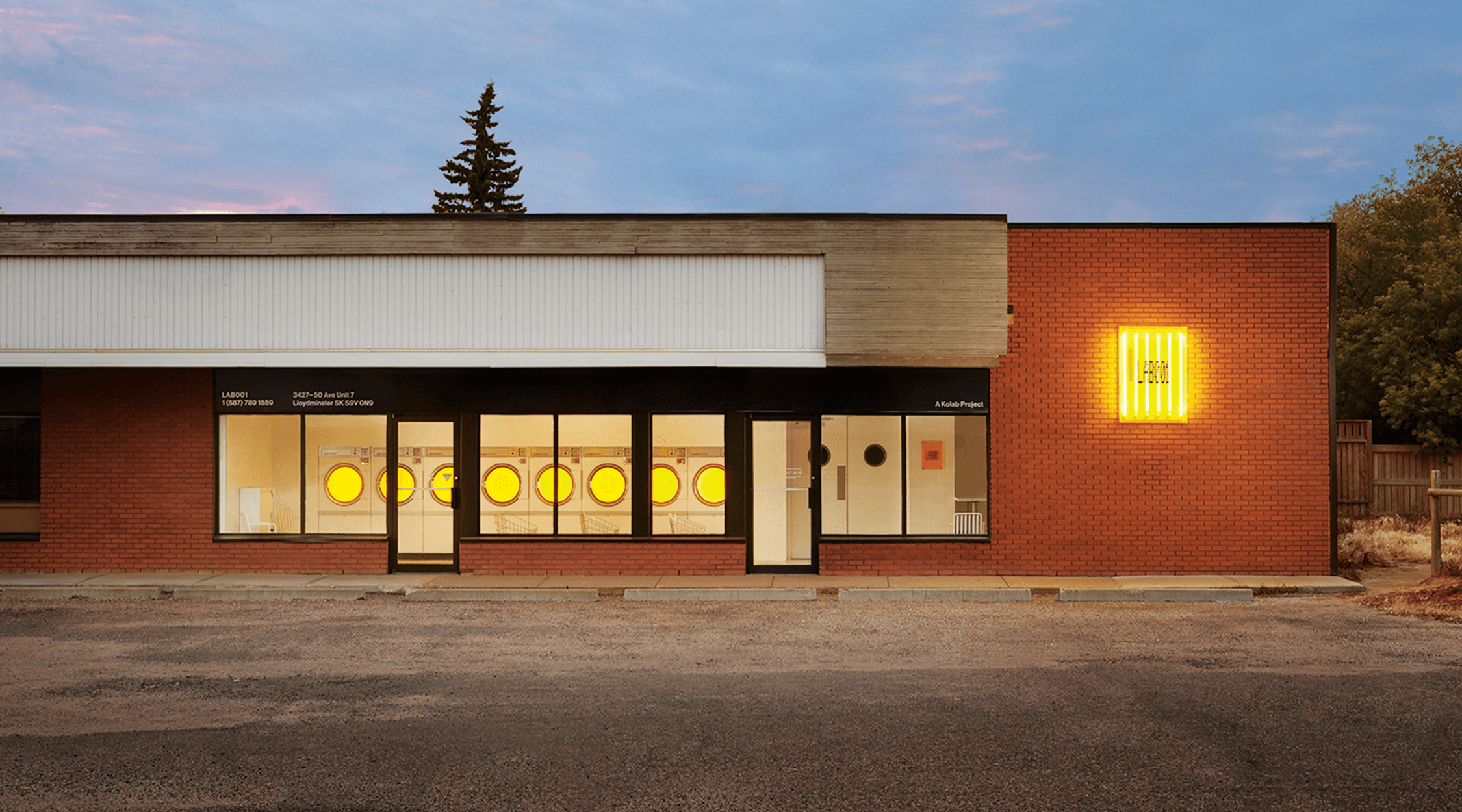 Just inside the doors, an austere entry lined with vintage washing machines and metal carts leads to a room where pipes, grinders and other pot accoutrements appear to float effortlessly in transparent acrylic cases. A black and yellow news ticker above the stainless-steel reception desk displays customer wait times. 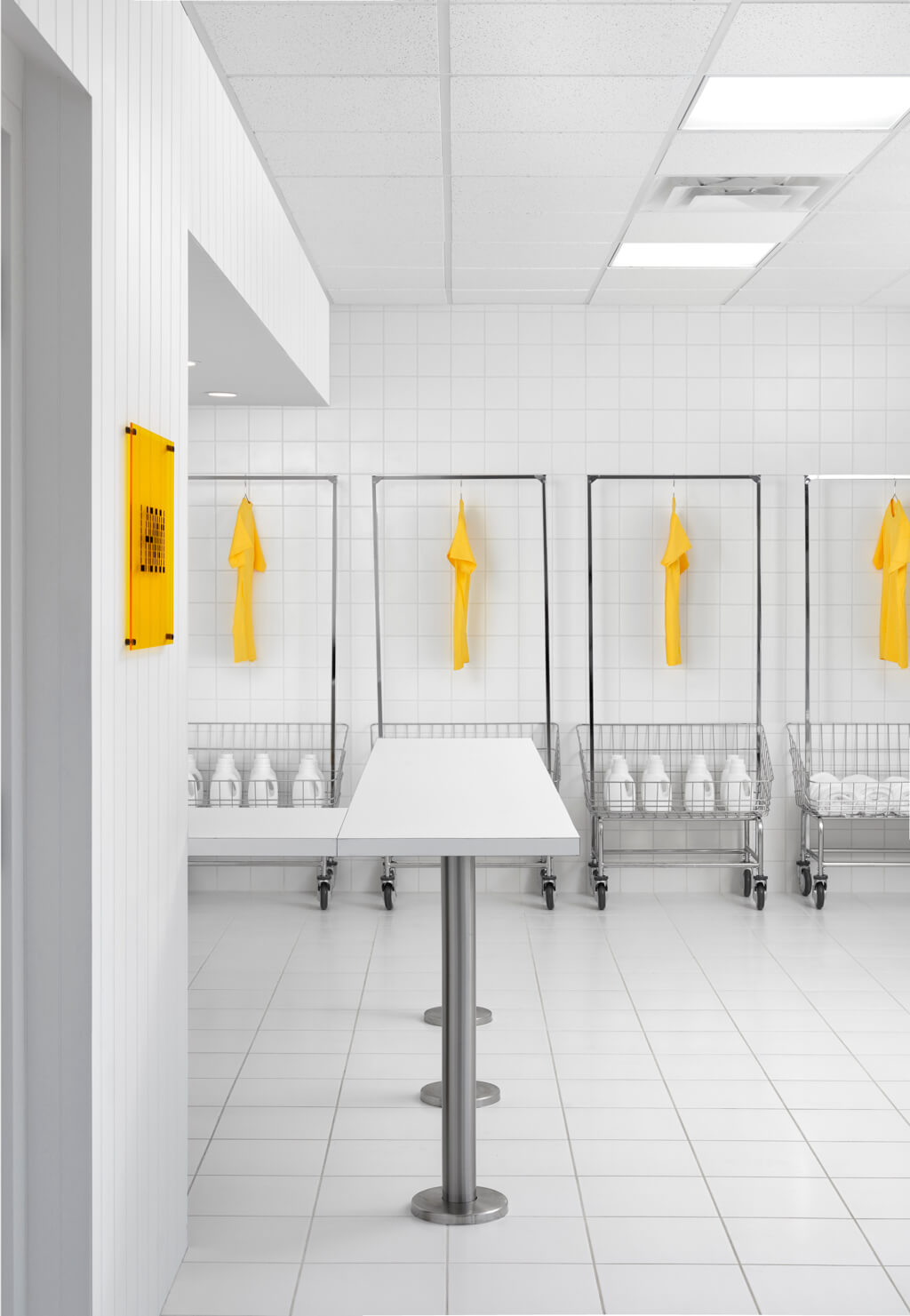 “I wanted to emulate a business that would be located here already. The laundromat was the perfect front,” says LAB001’s designer, Emil Teleki. The brains behind Toronto studio I-V, Teleki has also designed offices for OVO Sound and Campari in his home city. With this latest project, his objective was to create a deceptively simple space using geometric forms and a restricted material and colour palette — all in service of highlighting merchandise by Kolab and other brands. 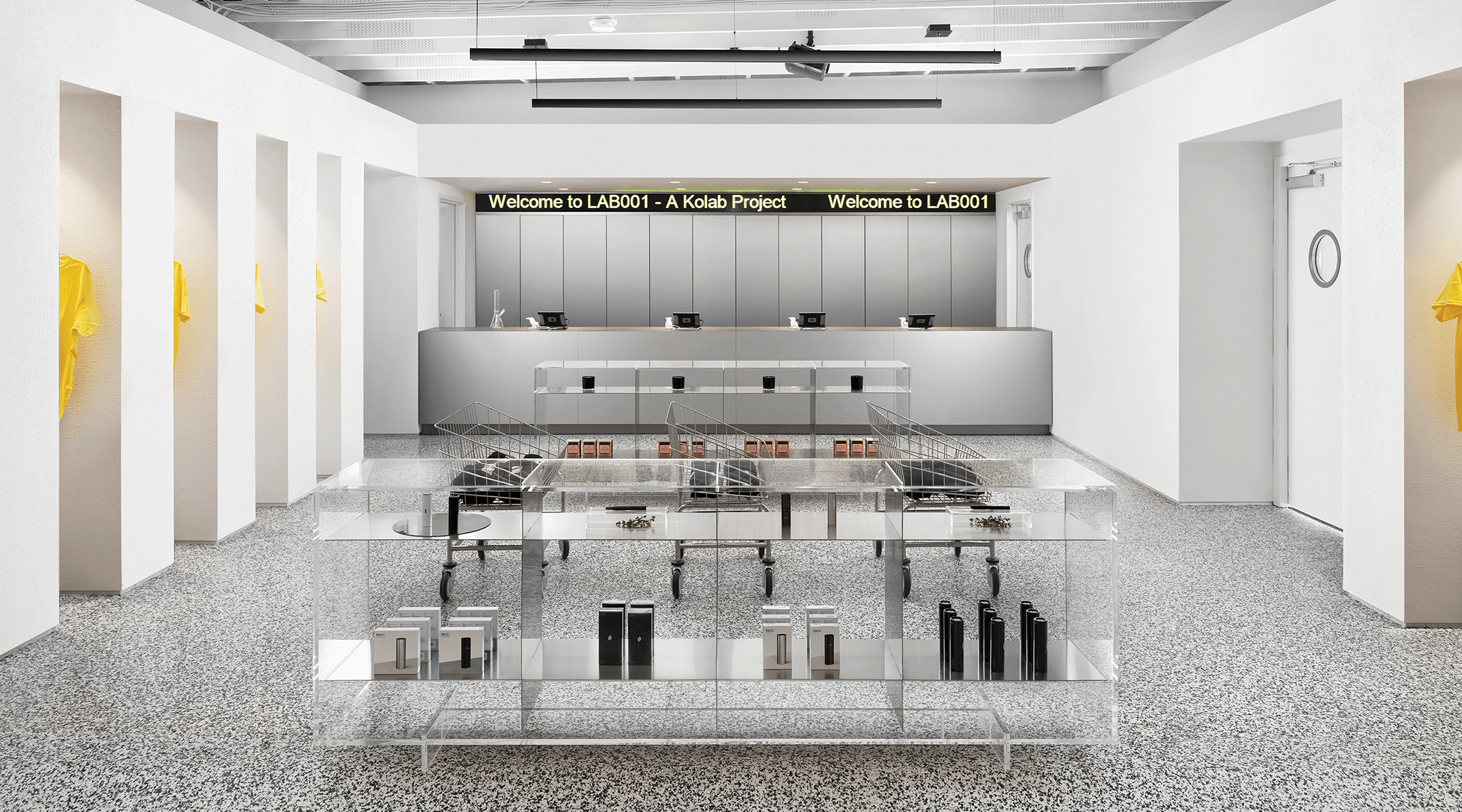 Fitted with slotted stainless-steel shelves, the see-through cases showcase the brand’s accessories in the most seamless way possible; they were assembled without a single weld or fastener.

Meanwhile, the boxy recesses carved into the crisp white textured walls show off items of clothing like singular artworks. The black and white speckled epoxy floor provides a jolt of energy in the otherwise stark space. “There’s an interesting play between the floor and the almost mute walls, which are like a beautiful backdrop,” says Teleki. “Because the floor was never going to hold any product, it could be visually loud.” 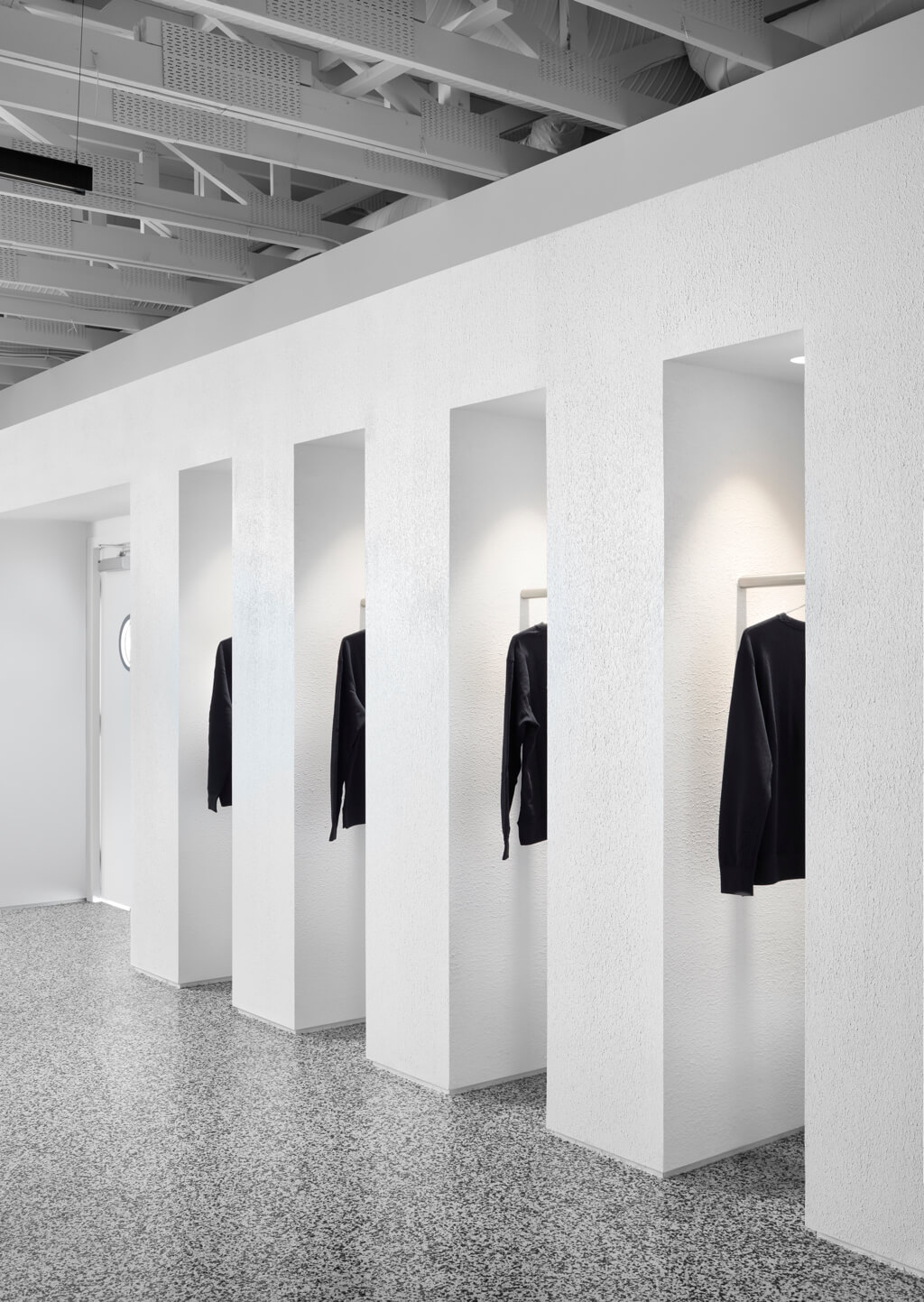 The strict governmentally mandated regulations for dispensaries informed much of LAB001’s design. For instance, the front room provides an area for customers to be ID’d and the sleek stainless-steel millwork at the back of the shop hides all the actual cannabis, which cannot be openly displayed. Teleki never felt daunted by the restrictions, nor did he look to the other dispensaries that have cropped up post-legalization in Canada, which he characterizes as either resembling cluttered variety stores or being hyper-futuristic. 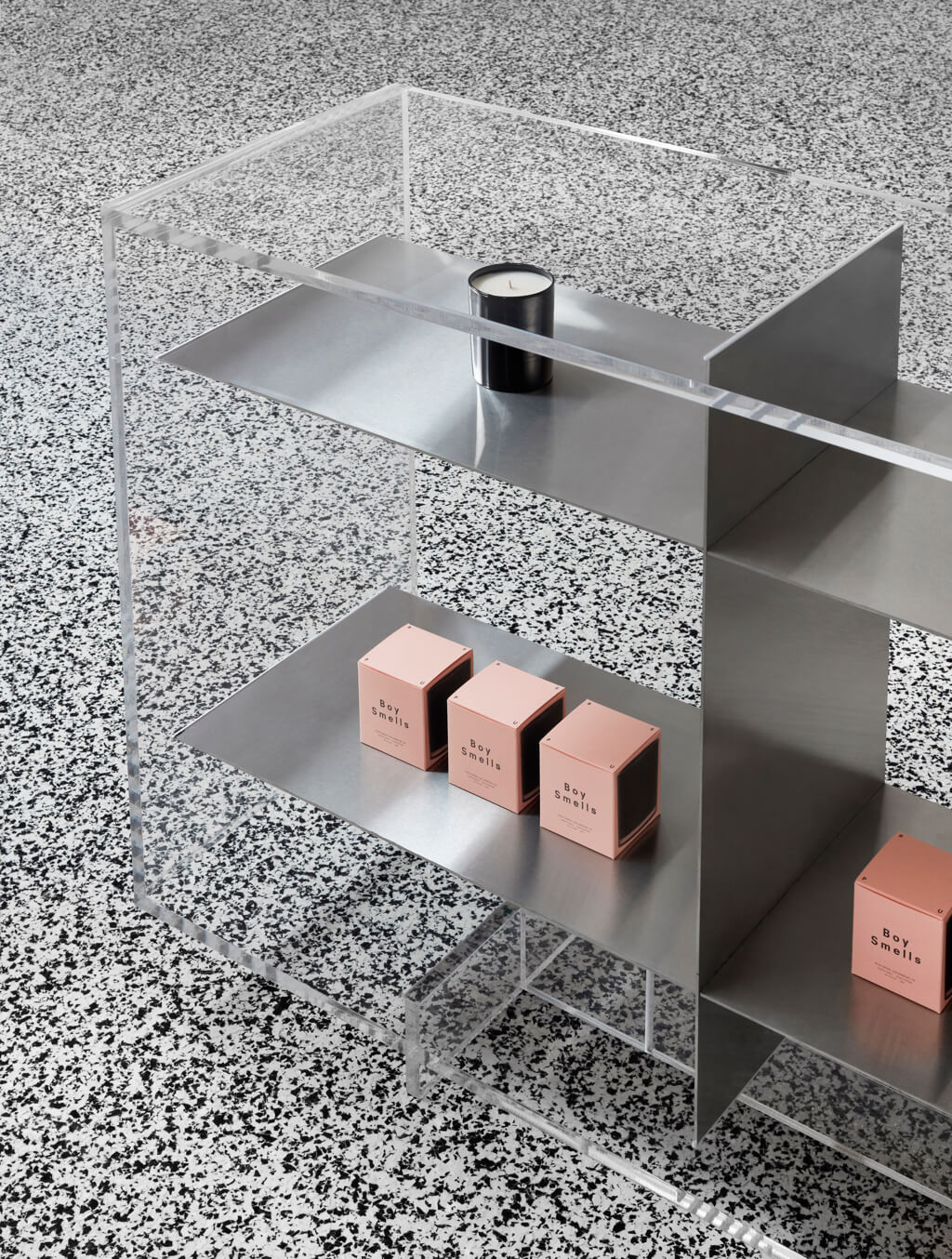 “If you take precedents from the industry you’re in, you’re only going to toe the line,” says Teleki. “It’s important for me to ignore what’s being done and develop an idea that exists outside of that world.”

Designed by Toronto studio I-V, LAB001 is entered through a fake laundromat.