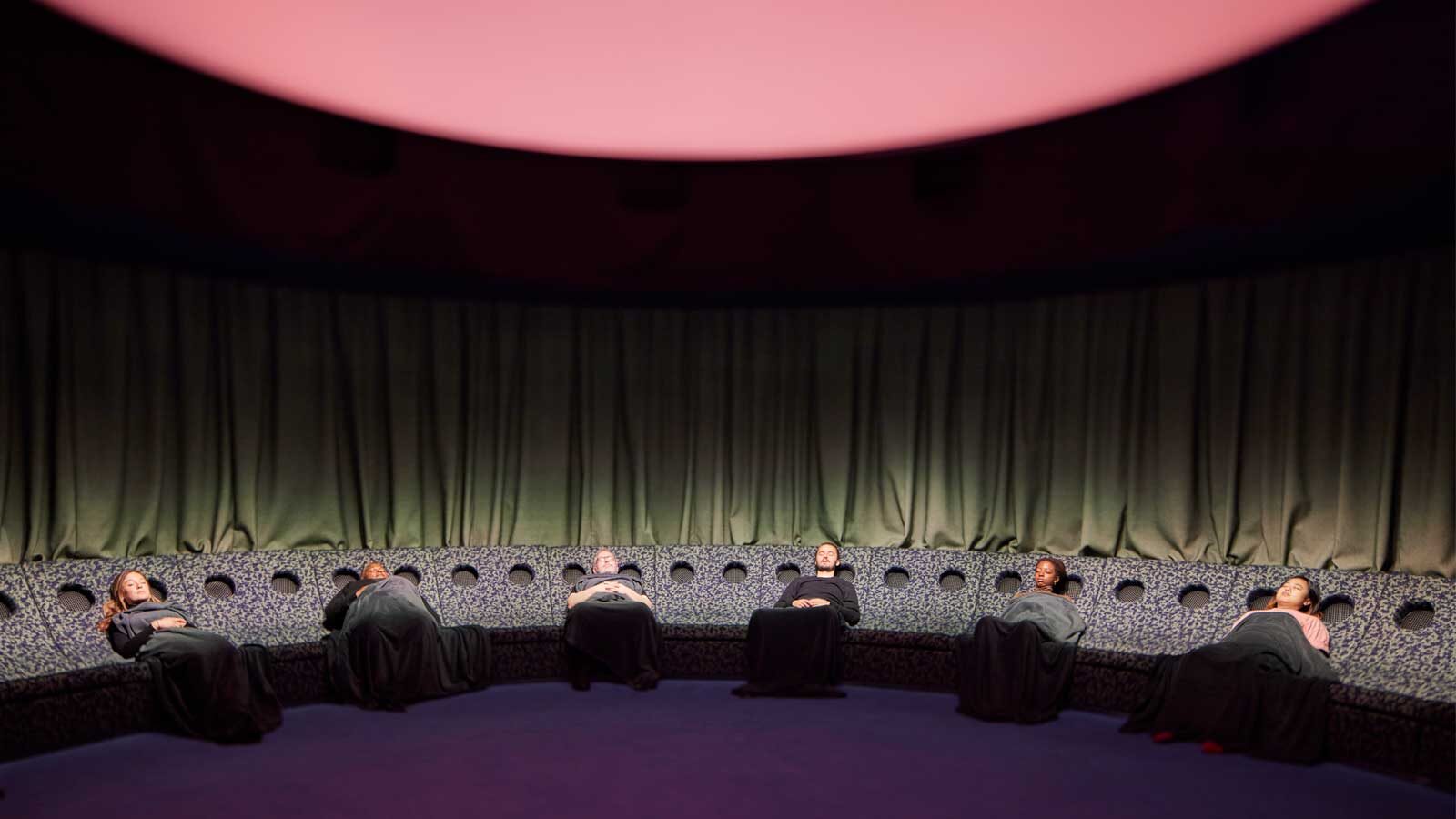 Created by Collective Act, the site-specific artwork offers visitors a dream-like spectacle that cannot be captured on camera.

Promising a consciousness-altering experience, Dreamachine scales up the work of pioneering artist and inventor Brion Gysin and allows a new audience to collectively immerse themselves in the piece. The original Dreamachine was designed by Gysin, based on the artist’s own pre-psychedelic experience on a bus to Marseille, during which he was gazing out of the bus window. He found himself lost in the gentle flickering of the sun through the tree canopy. Gysin has since described the movement of the light to have created “an overwhelming flood of intensely bright patterns in supernatural colours, which exploded behind [his] eyelids: a multidimensional kaleidoscope whirling through space.” 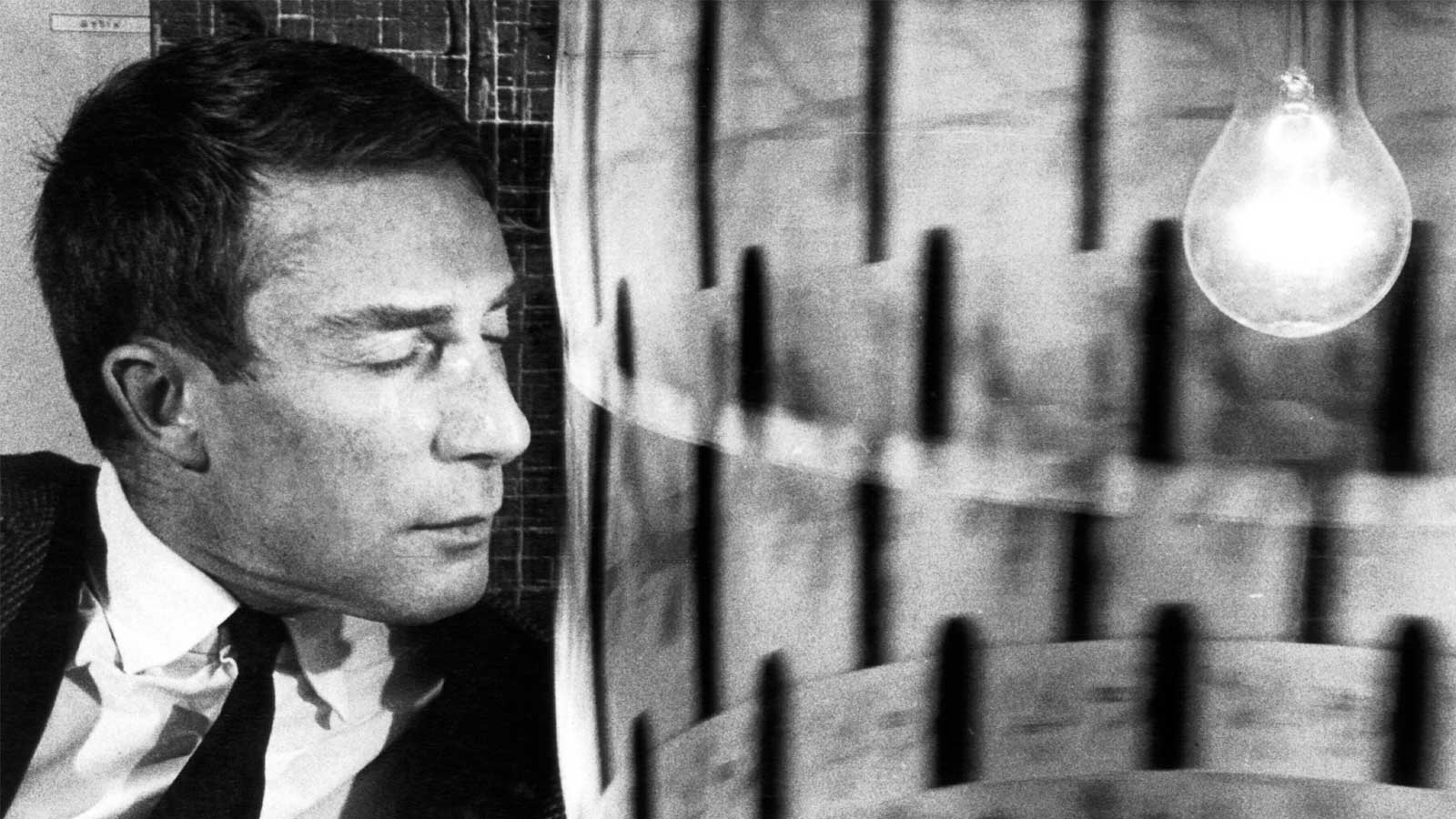 After discovering that the experience was not a dream but a documented neurological response to light flickering at a specific frequency that resulted in a visuals spectacle in one’s mind, Gysin set out to create the Dreamachine: a small-scale device that could replicate the effect — which he has called a “transcendental experience” — on demand.

Participatory art specialist Jennifer Crook had already long been fascinated with Gysin’s piece and the immersive experience it creates when she came up with the idea of scaling it up to produce a transformative experience that could be shared instead of individually witnessed. With a plethora of experience working with art world heavy-hitters like Olafur Eliasson and Christo, Crook marshalled a multi-disciplinary group of creatives and experts — operating as Collective Act — to bring Crook’s vision to life.

The star-studded Collective Act includes Jon Hopkins, the Grammy- and Mercury-nominated DJ and composer who primarily works in the genre of ambient techno, like the epic Immunity. Crook brought Hopkins onto the project to compose a soundscape to accompany Dreamachine — a dreamy piece that sets the tone to be immersed in a visual effect. 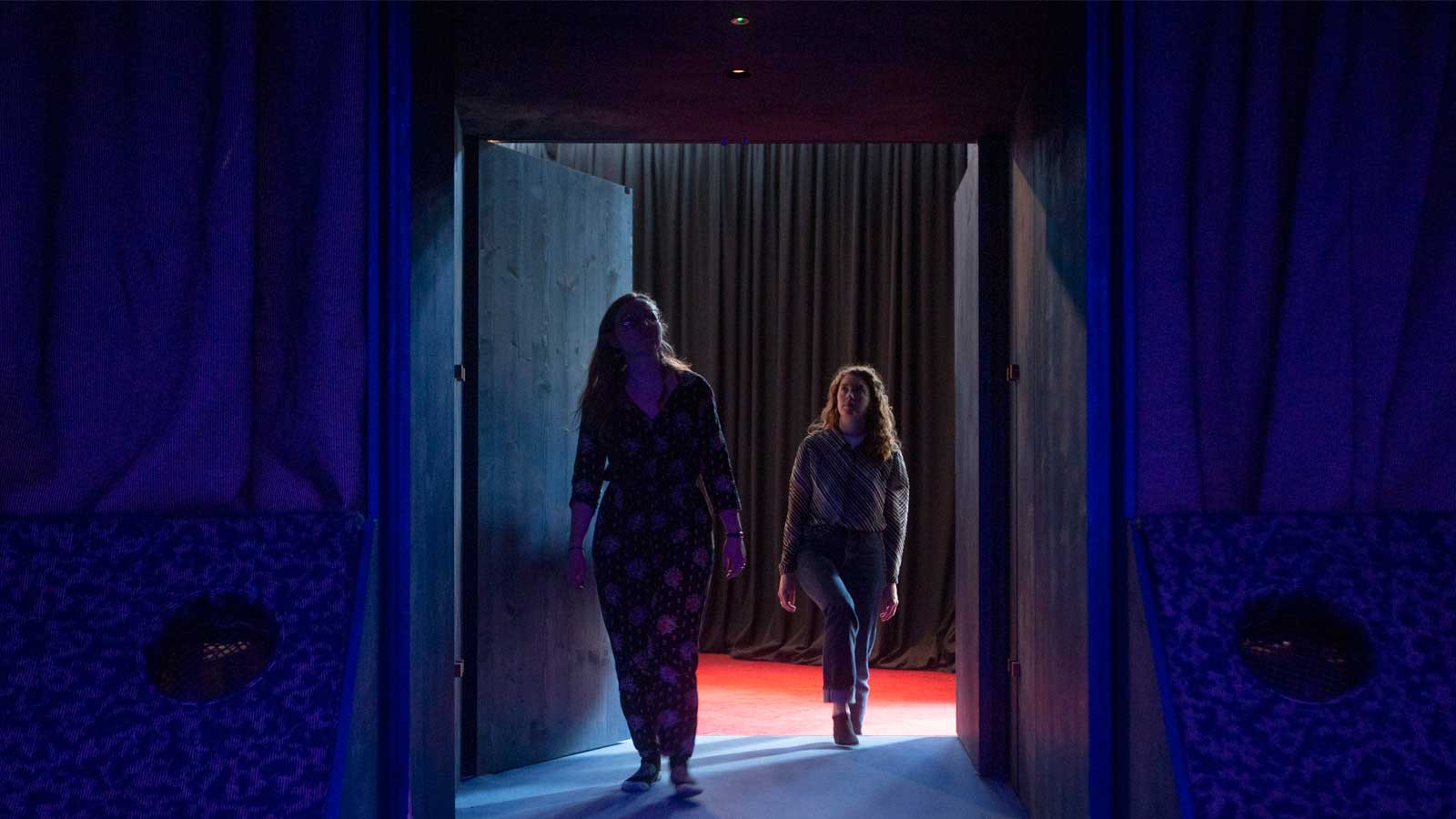 To design the space for the experience, Crook turned to the Turner Prize-winning architecture and design collective Assemble. They were tasked with creating a mobile structure for the scaled-up Dreamachine. Assemble’s Dr. Jane Hall describes the collective’s design as being centred around collectivizing the previously individual experience that the Dreamachine creates. To create a space in which visitors would feel comfortable sharing their experiences, visitors are all seated in a circle facing one another. 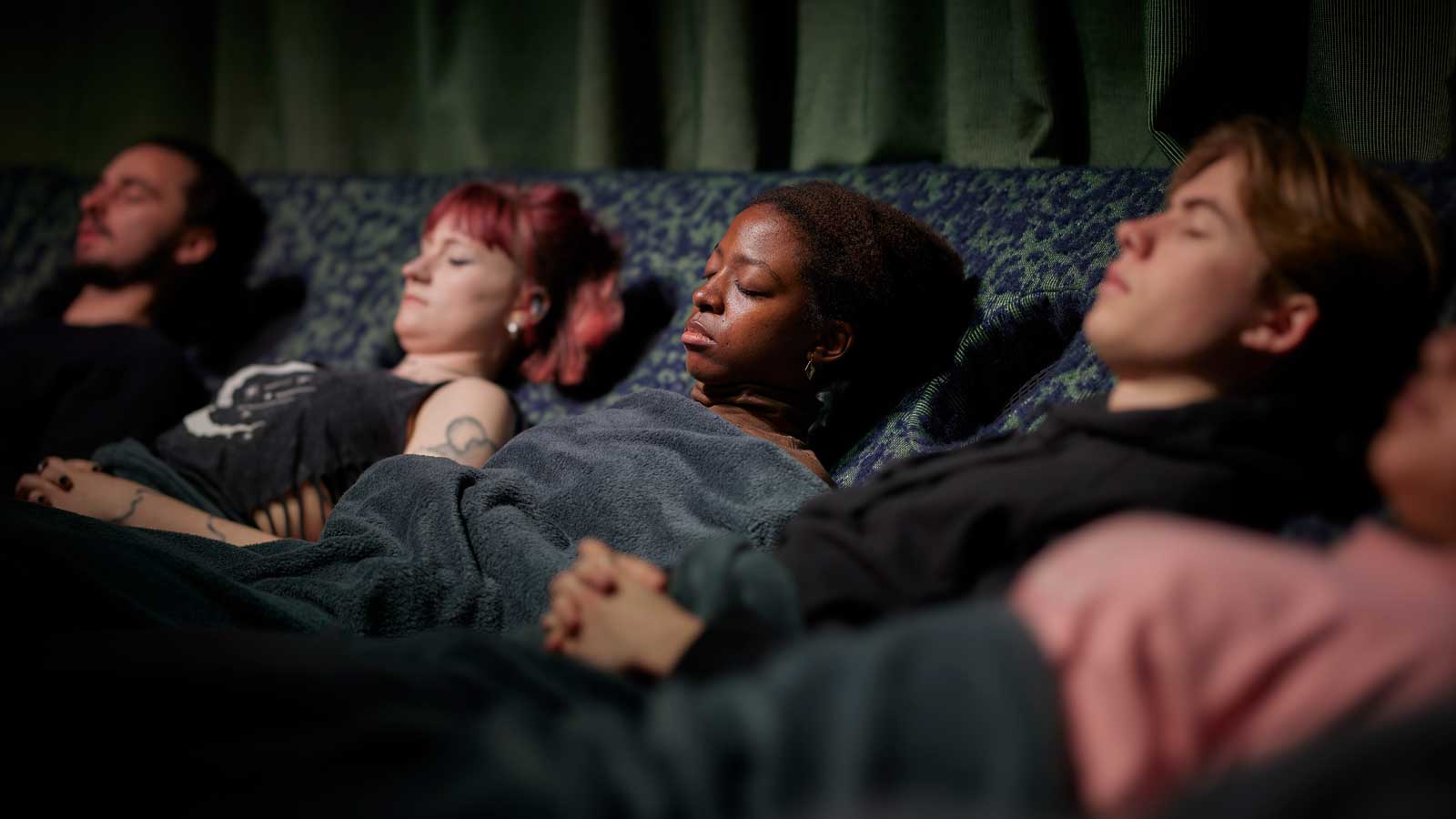 The design makes use of texture and colour to give the space a visual interest without attempting to recreate the experience of the Dreamachine, which is only visible in the mind’s eye. The plush purple floors and heavy olive curtains cocoon the visitors, creating a safe, intimate setting in which to collectively experience the hallucinatory effect of the installation. 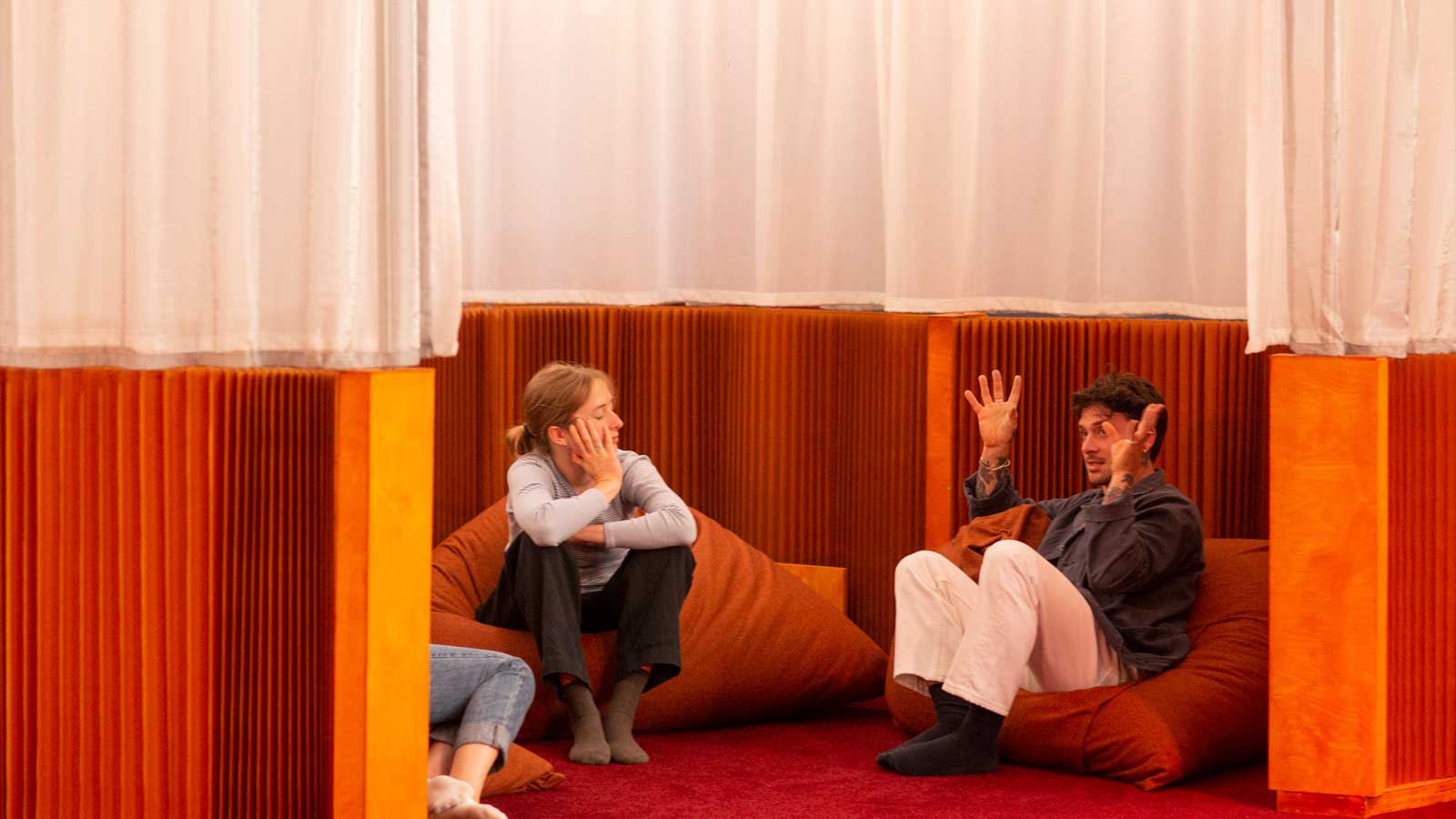 Another key member of the Collective Act is neurologist Anil Seth, who has suggested that the Dreamachine’s flickering lights at specific frequencies interact with the brain’s natural rhythms (alpha rays) to create unexpected visuals. Though visitors may enter together, their simultaneous experiences of the phenomena will be deeply personal — an unprecedented opportunity to see the inherent artistry of one’s own inner workings.

Created by Collective Act, the site-specific artwork offers visitors a dream-like spectacle that cannot be captured on camera.