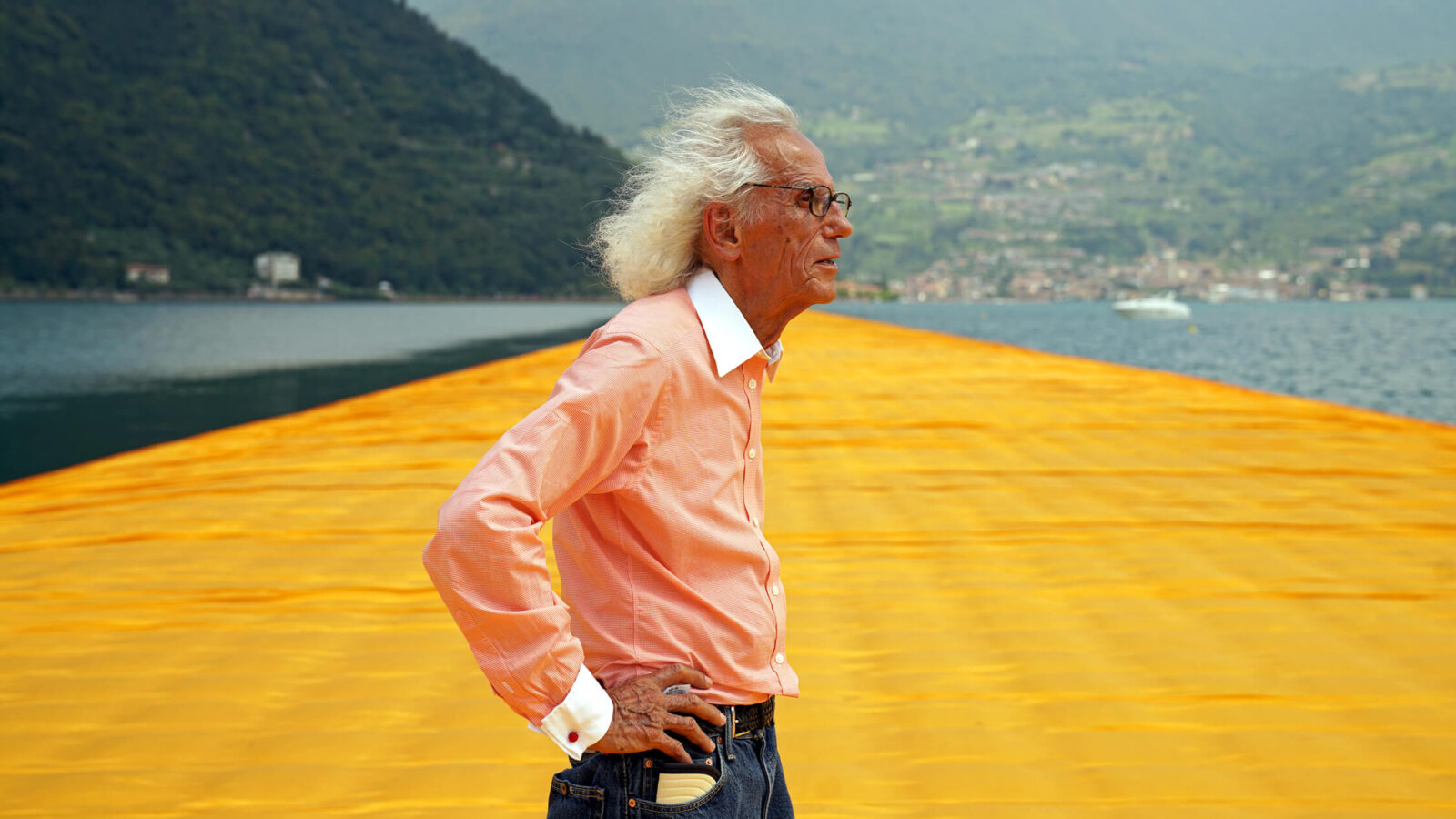 Remembering Christo (1935–2020): An Artist at the Edge of Architecture

From wrapped buildings to floating pathways, the pioneering artist left an indelible mark on art in the public realm.

On May 31, 2020, influential contemporary artist Christo — who wrapped bridges, monuments, museums and even parliaments — passed away at his New York home at the age of 84. Known for his decades-long collaboration with wife Jeanne-Claude Denat de Guillebon as Christo and Jeanne-Claude, the Bulgarian artist leaves a legacy of profound, place-bound and monumental public works that trace the perimeters of art, architecture, infrastructure and sculpture in a category all their own.

“Christo lived his life to the fullest, not only dreaming up what seemed impossible but realizing it,” says his office in a shared statement. “Christo and Jeanne-Claude’s artwork brought people together in shared experiences across the globe, and their work lives on in our hearts and memories.” 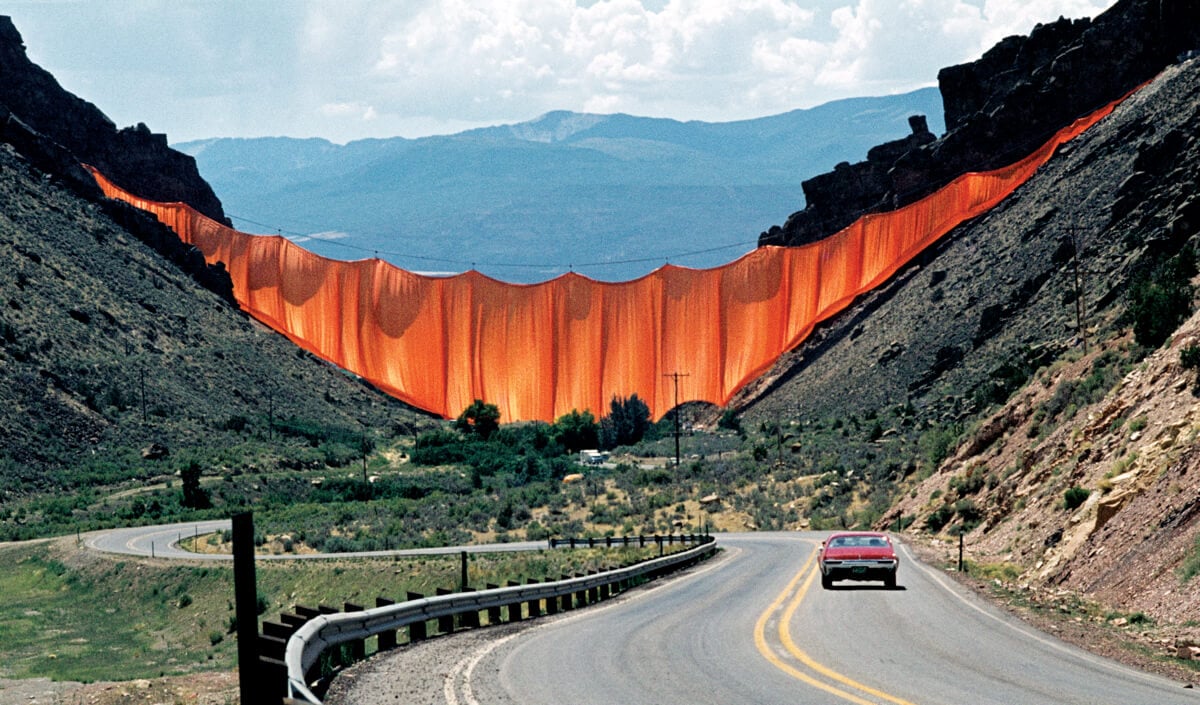 Born Christo Vladimirov Javacheff in Gabrovo in 1935, he studied architecture, painting and sculpture, among other disciplines at the National Academy of Art in his native Bulgaria before relocating to Austria and eventually to Paris in the late 1950s. In 1958, he met Jeanne-Claude and the pair wed the following year. Both were born on the same day and the same year or “in the same moment,” as he would often say.

During their 1961 exhibition in Cologne, Germany — featuring readymade objects the artists had concealed with fabric and bound with string — the weekly gallery closure on Sunday and Mondays sparked the idea to pursue a public work, always visible to passersby for the show’s run. The result was an intervention using oil barrels that would not only inform the temporary 1962 work Iron Curtain (a wall of stacked barrels enclosing Rue Visconti in Paris) but the pair’s lasting interest in environmental and architectural interventions in the public realm. 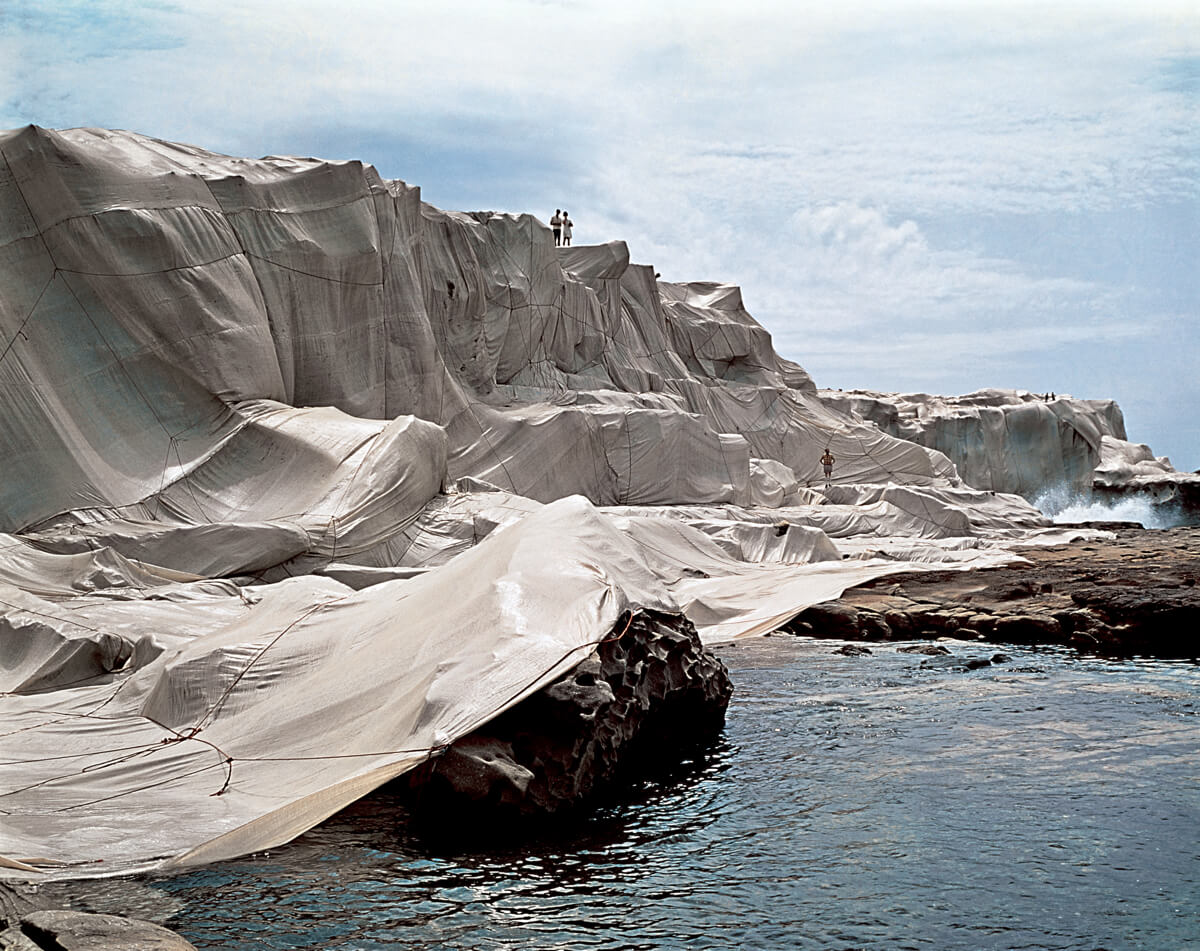 Erosion-control fabric typically used in agriculture was employed to wrap 2.4 kilometres of cliffs and beaches along the South Pacific Ocean for “Wrapped Coast, Little Bay” in 1969.

“I tried to do my art, and basically, I tried to communicate,” he told Surface Magazine of these early years, “not only in the art space with galleries and museums, but also with open spaces.” In 1964, the couple relocated to New York, where he continued to live and work for the next 56 years.

After a number of attempts to wrap public buildings — from a large corporate tower in Times Square to the Museum of Modern Art — Christo and Jeanne-Claude successfully cloaked the Kunsthalle in Bern, Switzerland, as part of its 50th anniversary celebrations in 1968. Soon after, the pair would realize 1969’s Wrapped Coast, Little Bay in Sydney, Australia, as well as two large-scale partitions in Colorado and California. 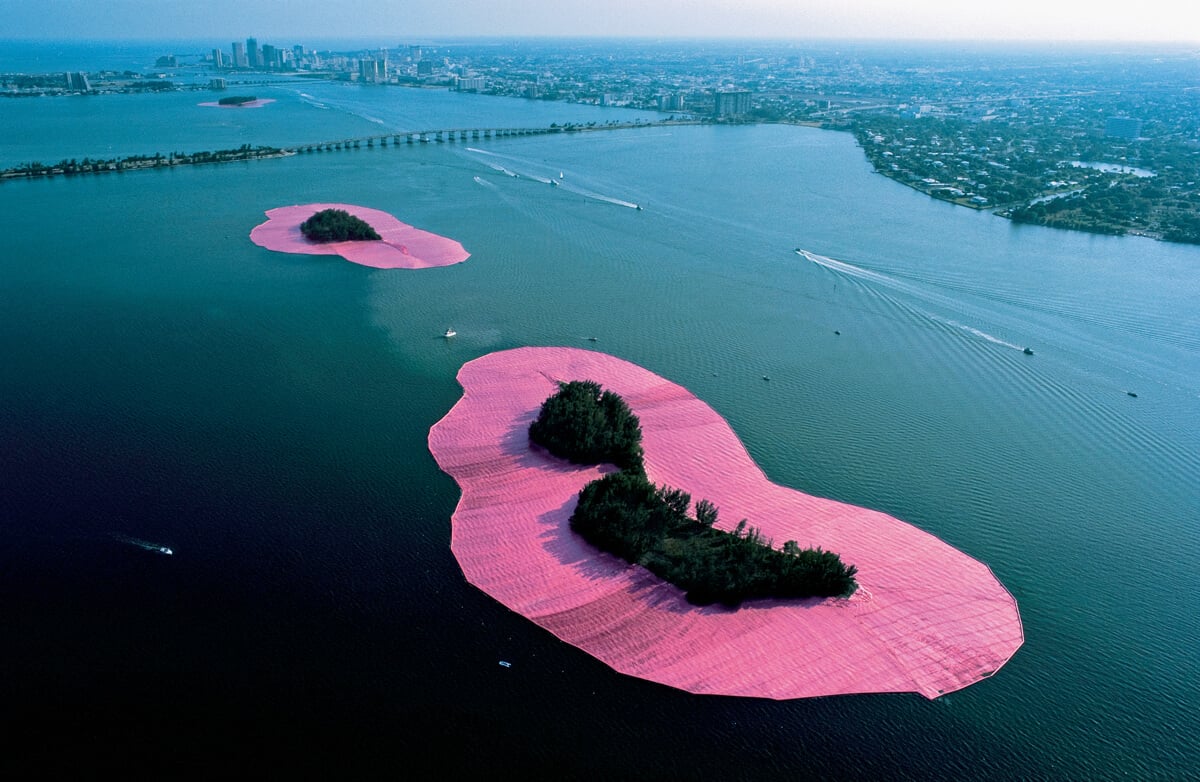 “Surrounded Islands,” completed in 1983, joined a number of landscape interventions the pair completed in America during the 1970s and 80s.

In 1983, after three years of development, the duo enveloped 11 islands in Miami’s Biscayne Bay with over 600,000 square metres of magenta polypropylene fabric, accommodating the contours of each to materialize the city’s ongoing relationship between land and water.

However, not all projects would be so clandestine. Wrapped Reichstag, one of the pair’s most renowned and widely published works (and a key feature in art history textbooks the world over) took over 25 years to complete: it began in 1971 and was finally completed in 1995 after having languished for decades in the permitting process.

Thirty-seven kilometres long and assembled by over 600 workers, “The Gates” in New York’s Central Park took 26 years to come to fruition after the proposal was rejected numerous times.

Similar issues stalled The Gates, a collection of 7,503 saffron frames with corresponding fabric panels lining the serpentine paths of New York’s Central Park. Like the Wrapped Reichstag, it would become an oeuvre-defining work. Architecture critic Michael Kimmelman even described the project as the “first great public art event of the 21st century.” 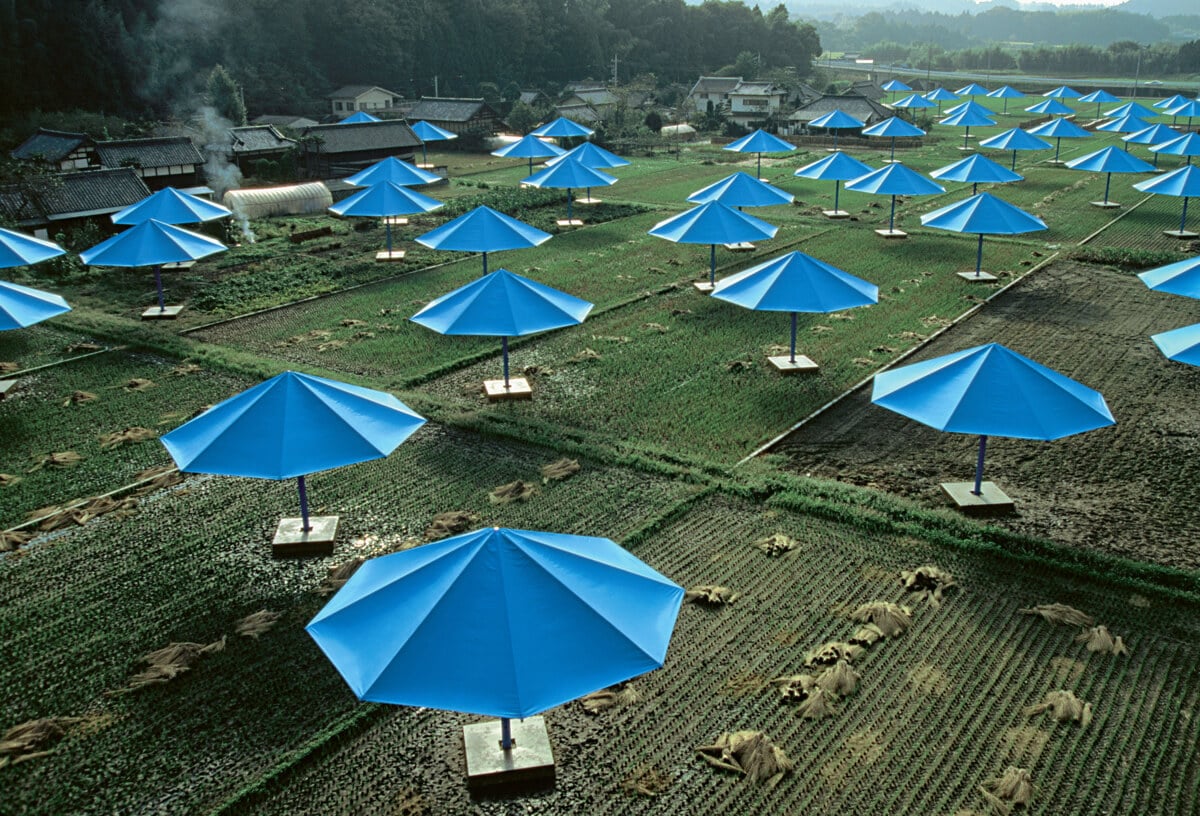 The duo’s strategies for funding their productions were also unique. They refused donations, grants, scholarships and other forms of public investment. Instead, to raise the US$26million needed to execute the 1991 installation The Umbrellas, for example, the artists sold their evocative collages, models, studies and many other preparatory drawings. “By the end, we not only had nothing left, but were in debt,” Christo said of the approach they took to every major project. “But that wasn’t the point.” 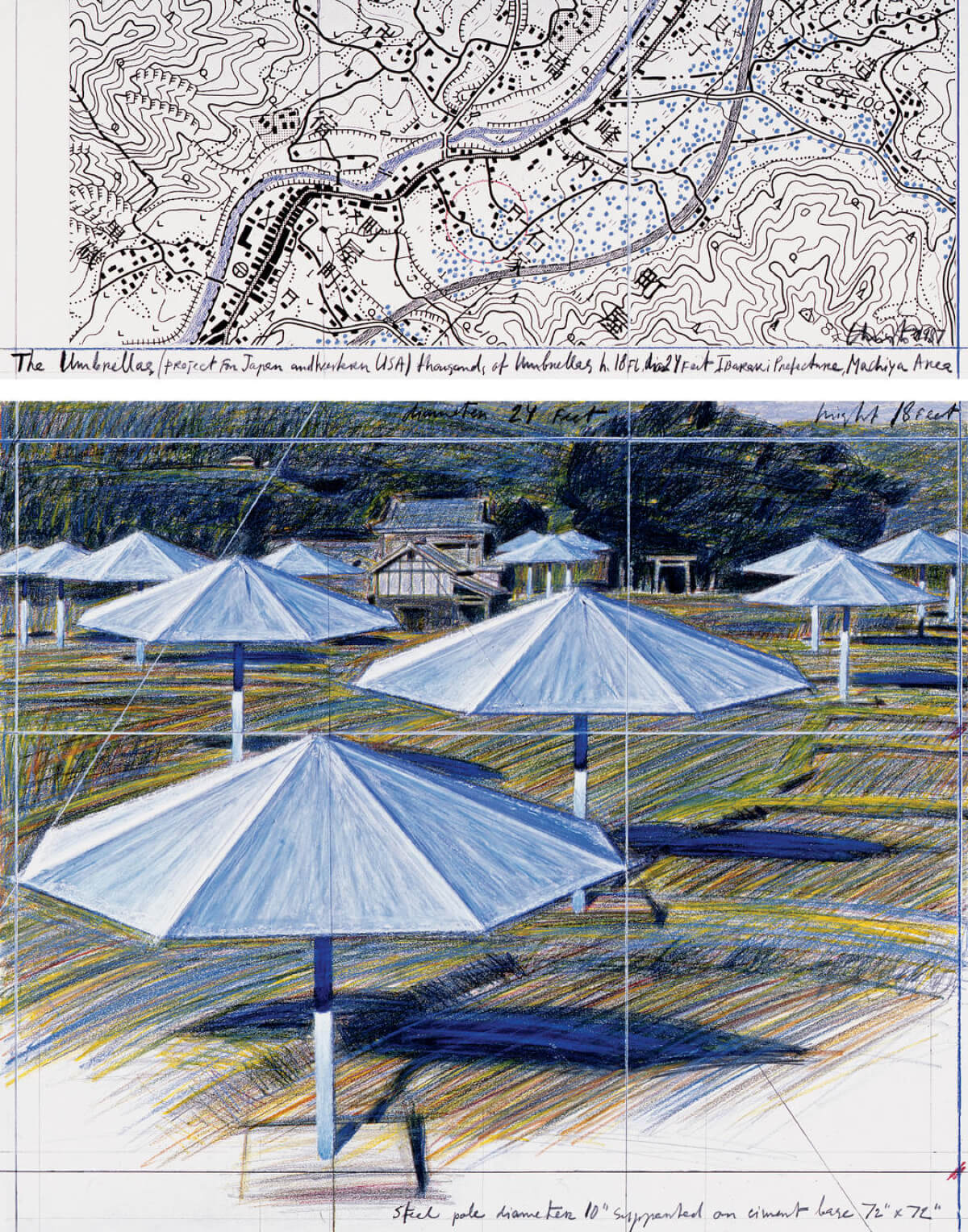 Preporatory material – such as this 1987 pencil, charcoal, wax crayon, pastel and fabric collage – were sold by Christo and Jeanne-Claude to finance their large-scale projects.

It was integral to Christo to be “absolutely free,” maintaining financial autonomy as well as ensuring all those involved in the often complex execution of his works were fairly compensated for their labour. As he told the New York Times in 1972: “For me, aesthetics is everything involved in the process — the workers, the politics, the negotiations, the construction difficulty, the dealings with hundreds of people.”

After Jeanne-Claude’s passing in 2009, he continued to develop many of the projects they had devised together in the ’60s, ’70s and ’80s — including L’Arc de Triomphe, Wrapped, which will mask the historic landmark in Paris for two weeks, from September 18 to October 3, 2021.

In 2016, the artist completed The Floating Piers, a three-kilometre marigold walkway floating atop Italy’s Lake Iseo. “Like all our projects, The Floating Piers was absolutely free and open to the public,” Christo said of the work, which stemmed from a scheme made with Jeanne-Claude in the early 1970s. It was the first project he executed since both The Gates and her passing. “The Floating Piers was an extension of the street and belonged to everyone.” 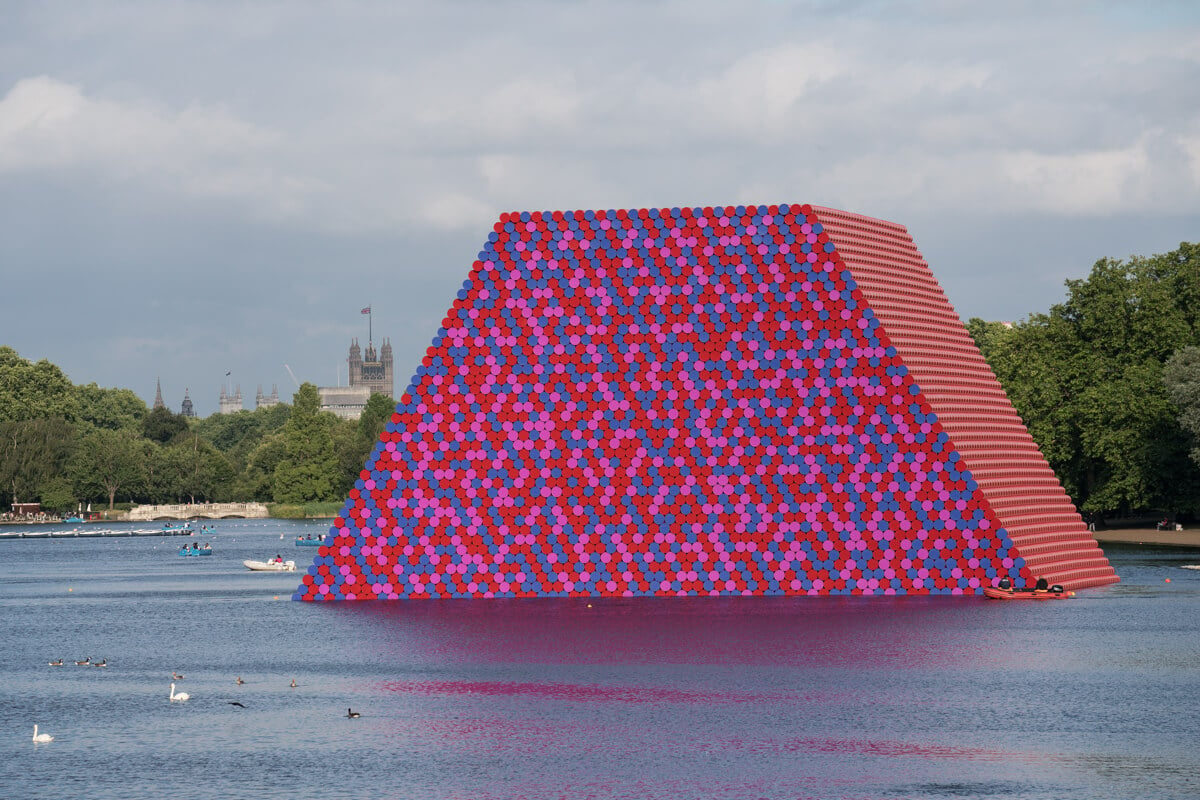 Borrowing from Islamic architecture as well as Egyptian tombs, Christo’s 2018 “The London Mastaba” was his first project in the U.K. The artwork complements the exhibition “Christo and Jeanne-Claude: The London Mastaba,” held at the nearby Serpentine Galleries.

Christo’s last temporary work, The London Mastaba, was executed in 2018 at the Serpentine Galleries in London alongside a significant retrospective of the project. Composed of 7,506 gallon barrels, the 20-metre pyramidal (even primordial) structure was supported by a platform of interlocking plastic cubes to allow the 600-tonne piece to float on the waters of the Serpentine Lake in Hyde Park. Though originally conceived in 1977 for Abu Dhabi, “the work we develop is always in relation to the place,” he told curator Hans Ulrich Obrist alongside the opening. 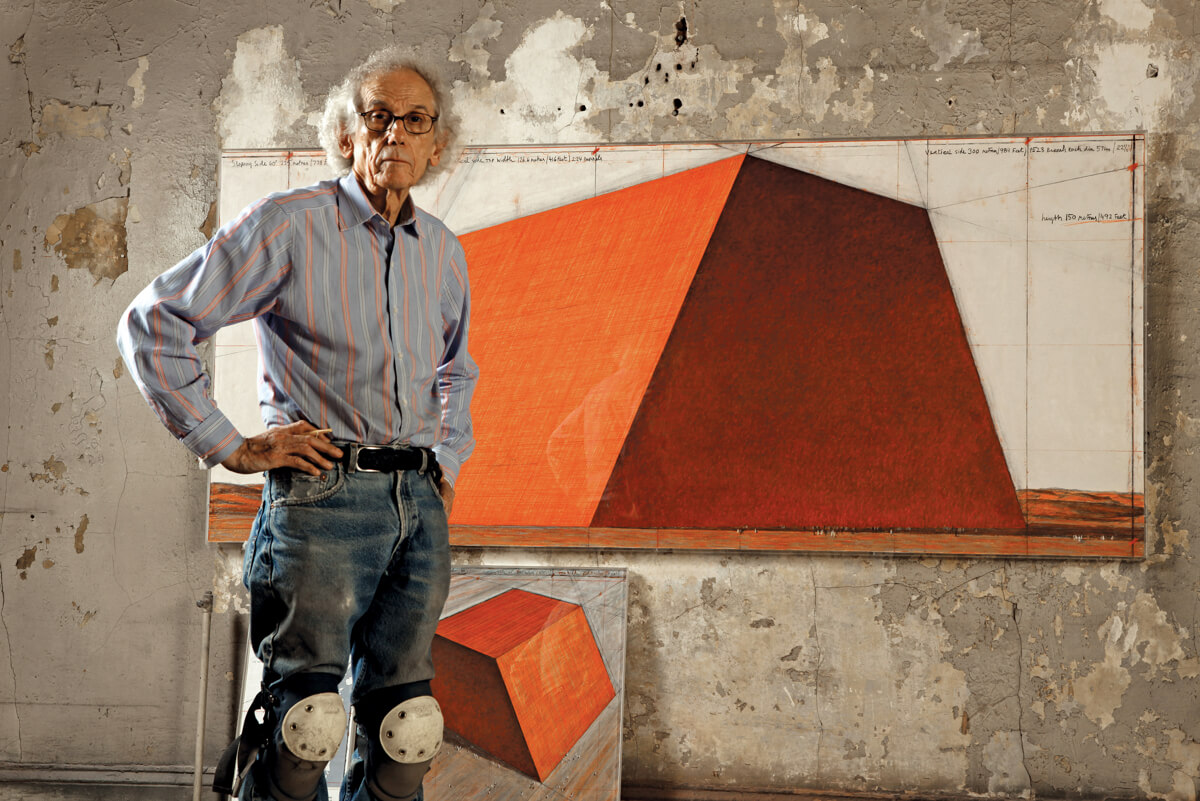 Christo poses in his studio with a preparatory drawing for “The Mastaba” in 2012.

Since news of his passing first circulated, a number of leading figures across the art and architecture communities have spoken about the lasting impact of his work.

Sharing a proposal from 1985 for a cloaked computer on Instagram, Zoë Ryan, the chair and curator of architecture and design at the Art Institute of Chicago, fondly remembered visiting his studio in 2014. “Listening to Christo talk about his work, I understood more clearly the entirety of his and Jeanne-Claude’s practice and their dogged determination to realize their mind-expanding work no matter the administrative, political or legal hurdles,” she wrote. “Lessons for us all.” 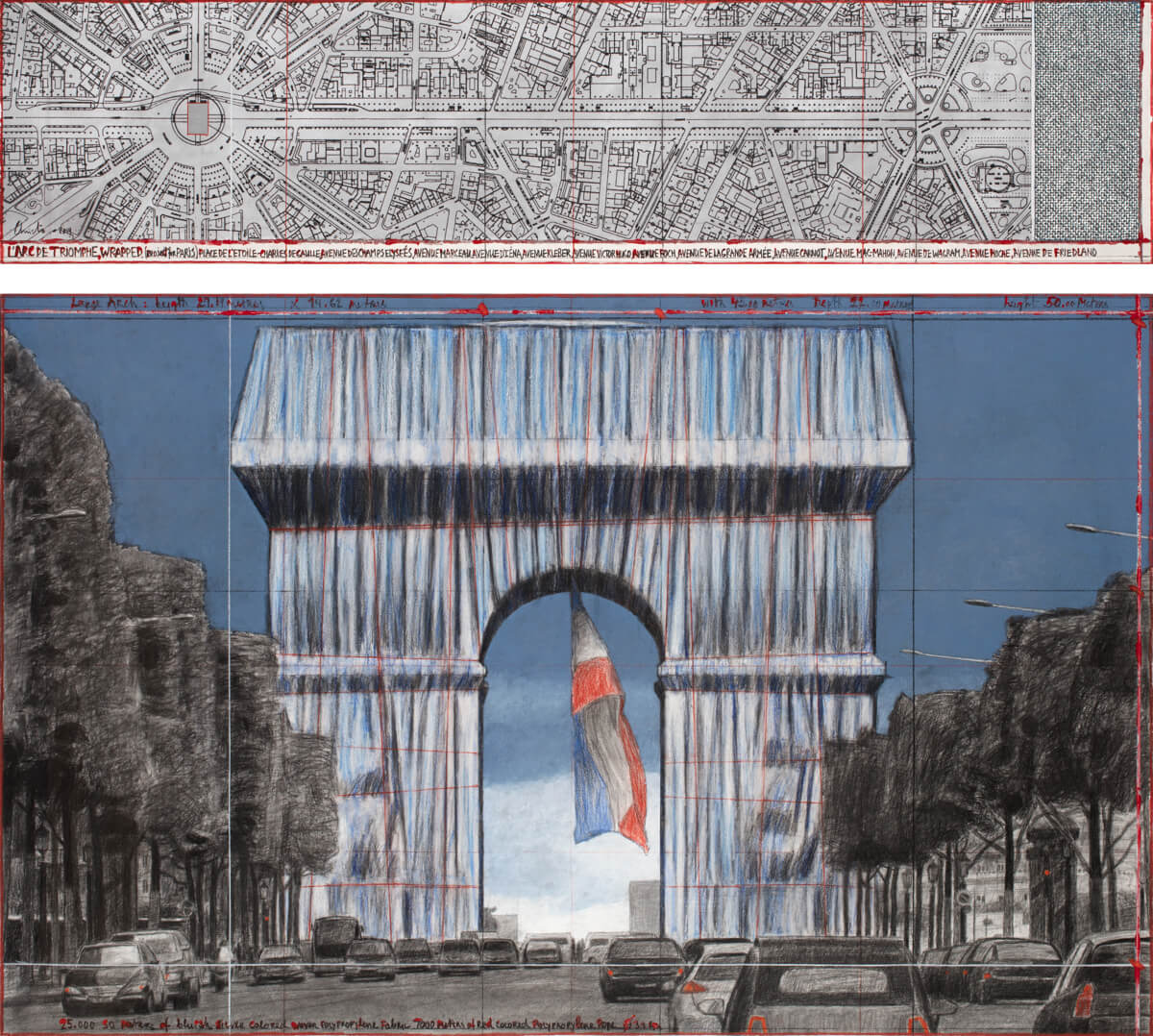 In development since 1962, “L’Arc de Triomphe, Wrapped” will see the landmark on the Champs-Élysées entirely cloaked in fabric during fall 2021.

In these pioneering acts of concealment, from cars and motorbikes to city infrastructure, Christo helped lay the foundation for how we articulate, address and understand art in the public realm today. Yet, it was his insistence on skirting the limits of genres, disciplines, categories and administrative barricades through such unassuming gestures as wrapping, lifting, floating and stacking that continues to resound today.

From wrapped buildings to floating pathways, the pioneering artist left an indelible mark on art in the public realm.