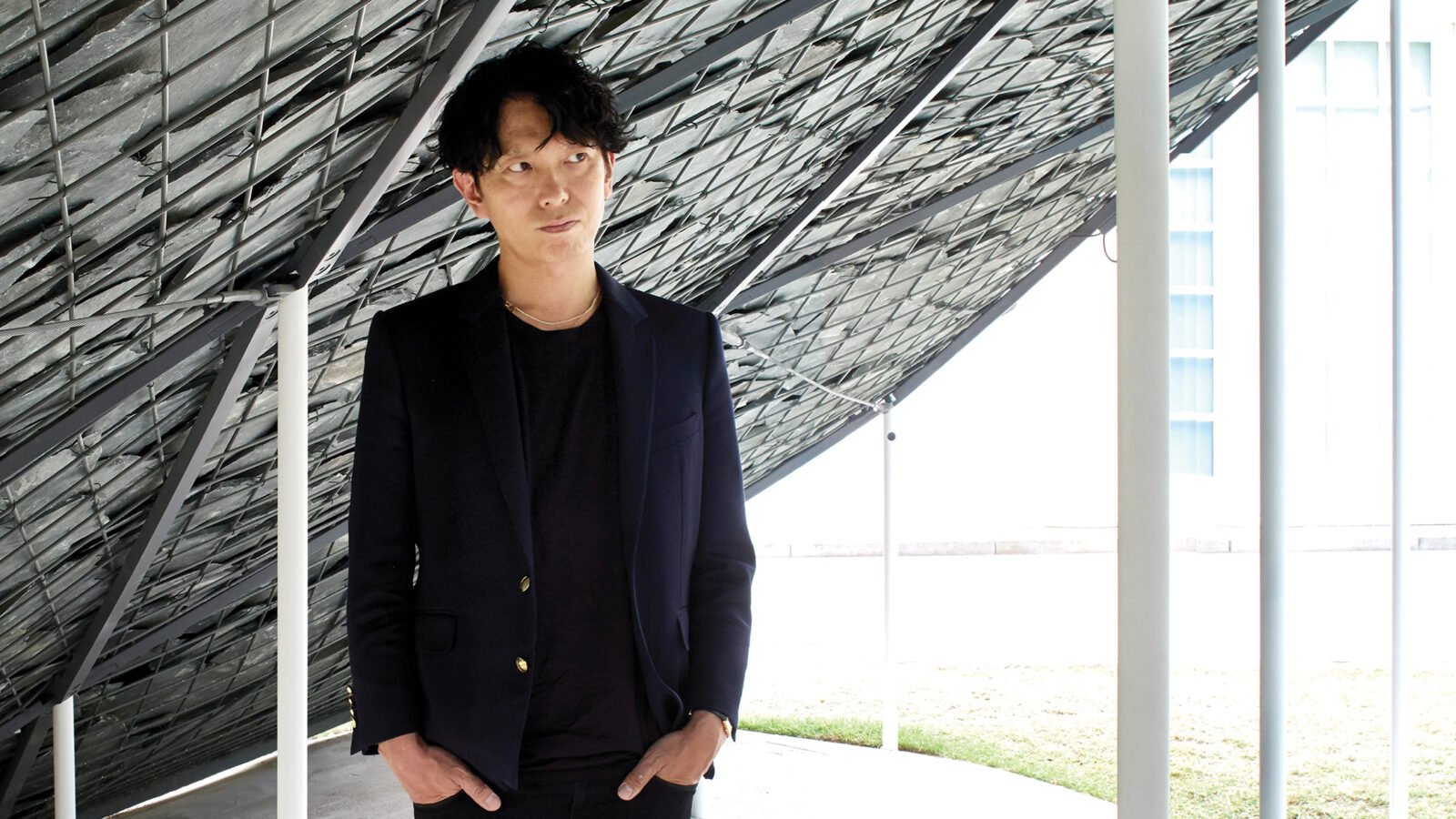 Controversies over this summer’s Serpentine Pavilion aside, Junya Ishigami’s work raises an important question: How can architects redefine their relationship with nature, creating buildings that enhance the whole of the earth?

This year’s Serpentine Pavilion, designed by Japanese architect Junya Ishigami, is rather ominous in appearance. Its sprawling grey mass, which looks from certain angles to be hovering, suggests a feathered flying dinosaur miraculously resurrected not by a scientist but by an architect. The seeming weightlessness of the structure is all the more impressive when you consider that its roof, composed of arbitrarily placed slate slabs, weighs more than 61 tonnes. The slabs are supported by slender white columns positioned between two and three metres apart, each piece piled onto a grid of steel mesh. Some of the pieces are held in place by wire loops, while others are held down by the weight of the stone atop them. Diminutive steel tables and chairs, also designed by Ishigami, furnish the spartan underbelly.

The pavilion’s rawness reflects the wabi-sabi aesthetic of certain Japanese garden huts. It’s also in keeping with the 45-year-old SANAA alum’s ongoing exploration of architecture’s relationship with nature, evident in just about all of his projects since he established his own practice, Junya Ishigami + Associates, in 2004. Among those projects are the sinuous, glass-enclosed visitor centre co-created with Studio MAKS for a Dutch park in 2017 and a cavelike subterranean restaurant soon to be completed in the Japanese city of Yamaguchi. For all of its uniqueness, however, Ishigami’s pavilion for the Serpentine Galleries is easily one of the most practical structures commissioned by the London art venue. While many of the past structures – there have been 18 summer pavilions before this one, including three by Japanese architects – exhibited more style than substance, Ishigami’s folly does what it’s supposed to: It effectively shields people from the elements, and is nice and breezy underneath.

Ishigami spoke to Azure in June, about a week before the pavilion opened to the public in Hyde Park. The official press launch, for which he had flown in, turned out to be a quiet affair, with two Serpentine directors, Yana Peel and Hans Ulrich Obrist, nowhere to be seen. It later emerged that Peel had resigned from her post the night before, following an allegation linking her to a controversial Israeli surveillance firm. And that wasn’t the only source of contention. The use of unpaid interns at Ishigami’s Tokyo office (plus his defence of the increasingly debatable practice) had come under fire early on, prompting the Serpentine to declare that no one working on the pavilion would be unremunerated.

In the end, Ishigami was forced to publicly reconsider a long-standing professional norm, much as his architecture challenges users and observers to reimagine the built environment as they know it – an impulse made clear in the travelling exhibition, called Freeing Architecture, dedicated to his work (it was at Paris’s Fondation Cartier pour l’Art Contemporain last year and is currently in Shanghai) and reiterated once again in London.

“I don’t like to propose something that is not grounded in reality,” he says. “But there are different types of realities for different situations or places.”

Congratulations on your commission.

Why did you choose to use slate?

I wanted to tap into the primitive and pervasive use of stone in buildings. You see stone buildings everywhere in the world, not just in Japan but also in China, in Europe and in the U.K. And with stone, you don’t need to do much [to it]. I wanted to create something that was part of the park, part of the landscape, make a new scenery, build a hill.

Where did the slate come from?

From Cumbria, in the North of England.

What sort of challenges did you face with it?

The biggest challenge came in trying to support something heavy with something light. I worked with the renowned structural engineer Jun Sato and Aecom to make the supporting steel structure as light as possible. I wanted the stone roof to look like a billowing sail. Each steel column is four centimetres in diameter. The columns vary in height; some of them are over four and a half metres tall, and the shortest ones are only about 20 centimetres in height. At the lowest point, the roof is almost touching the ground.

The second challenge was controlling how much randomness we introduced to the project. Architecture relies on certain repetitious features, but I wanted to avoid having too many of them. Each of the stones is hand-cut and therefore shaped randomly; their placement is also random. The steel columns, however, follow a curved grid, so they are not random.

Scale is important to you, isn’t it?

Yes. I envisioned the gallery building as a distant mountain to create a kind of shakkei [Japanese for “borrowed scenery,” the concept of incorporating background landscapes into the composition of a garden]. I want people to enjoy and discover new sceneries through the building I created. I wanted to make a building that had a relationship with its surroundings. British and Japanese people have different attitudes toward nature and landscaping.

Did you want to convey any particular Japanese sensibility through this building?

Not really. I didn’t want to make a symbolic building. It is possible and perhaps inevitable that something [of Japan] will come through by virtue of the fact that the building is made by me or filtered through me, someone who grew up in Japan. Having said that, I didn’t want a completely neutral, international building either.

Where in Japan did you grow up? Were you raised in the countryside, very near nature?

I grew up in a new town next to Tokyo. The new town was, you could say, very artificial, but nature was also very close. The town was built on the edge of a city.

You seem to revere nature. Do you avoid using things that are artificial in your work?

Not really. I’m more mindful of achieving a new balance between natural and artificial.

Do you feel a certain contradiction in what you do? As an architect, you have to build over nature, don’t you?

Perhaps when I was younger I felt this contradiction. If you think about the beginning of architecture, it was all about separating us humans from nature and creating an artificial environment that was comfortable to us. If you really wanted to prioritize nature, then it would of course be better if we didn’t do anything.

Today, however, what is natural and what is artificial is not so clear-cut. The boundary between the two worlds is increasingly ambiguous. We affect and bring changes to nature. Nature affects us, changing the way we live. I think that, instead of arguing about what is more important, we should think more about our relationship to nature. How does one achieve a good balance between the two worlds?

If you were to design a new town from scratch, what do you think it would be like?

It’s hard to say, as it would depend on where it is. I have a housing project in China, whose scale is almost like a new town. A city is only one facet of our natural world. To think of a city as an extension of a building is old-fashioned.

Perhaps we need to expand our thinking to include the whole of the earth?

I think that everyone now thinks about things in terms of the whole of the earth. We understand how it would affect nature, for instance, when we buy a plastic water bottle. We need to also start thinking about architecture in a similar manner.

People often say that your buildings have a dreamlike quality. Do you agree?

I don’t like to propose something that is not grounded in reality. But there are different types of realities for different situations or places. If I were working on a book, say, I would make a [drawing of a] building that would be appropriate to the reality of the book, which might not necessarily be structurally possible to build in real life. Books have their own logic. In the same manner, what is impossible to build in Japan may be easy and straightforward to build in China.

The pavilion I made is specific to the site, which, in this case, was the park. Using stone, I wanted to create something unique to the site, but also something that could tap into everyone’s imagination, no matter what his or her background was. Stone is something that you see used in buildings everywhere and also in nature: It’s primitive but domestic at the same time; it’s international and it can be very contemporary.

Junya Ishigami’s Serpentine Pavilion will be on view in London’s Hyde Park until October 6.

Controversies over this summer’s Serpentine Pavilion aside, Junya Ishigami’s work raises an important question: How can architects redefine their relationship with nature, creating buildings that enhance the whole of the earth?