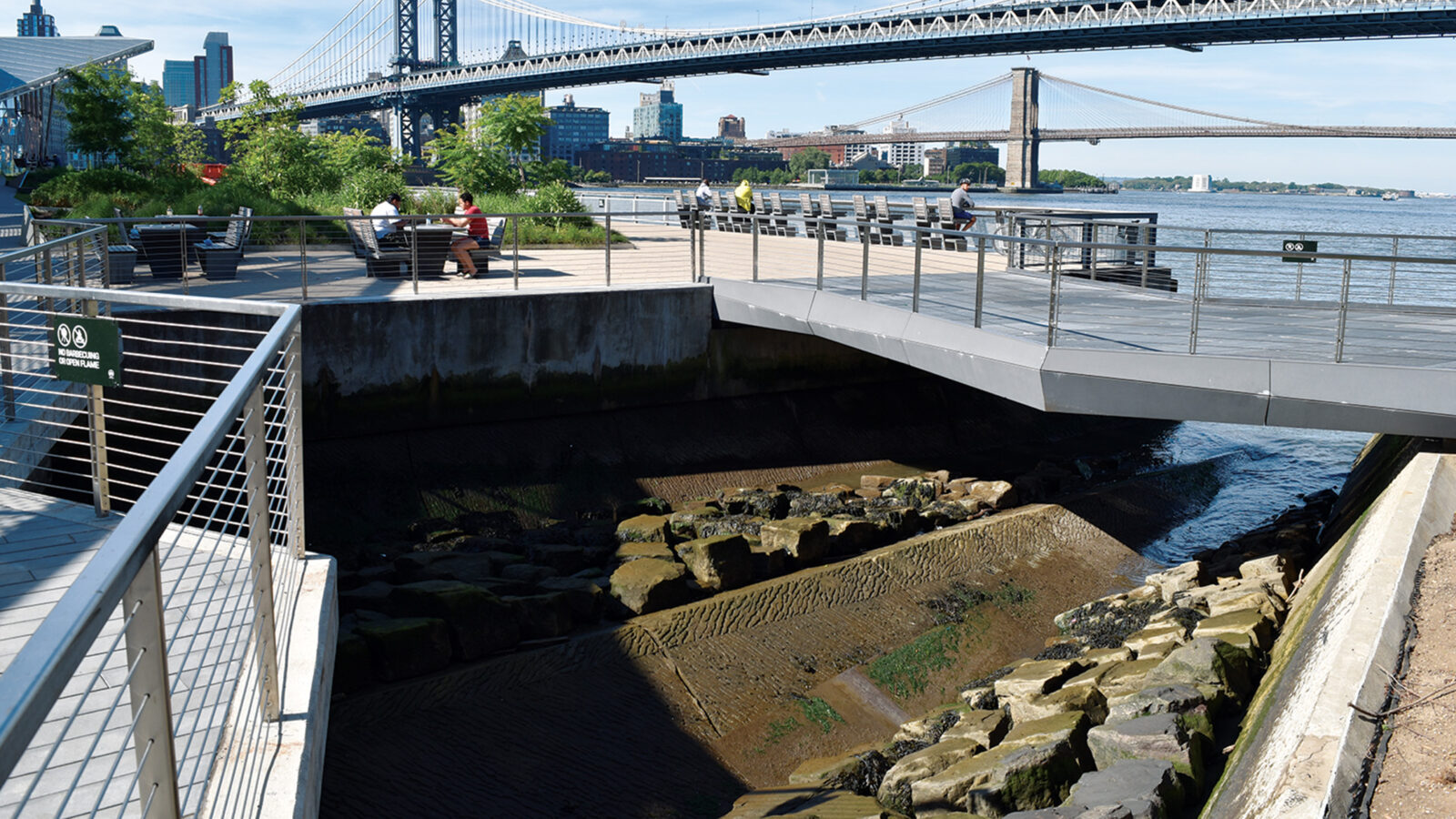 Pier 35: An Unlikely Abode For Public Life (and Mussels)

Shop architects and Ken Smith workshop transform Manhattan’s pier 35 into an eco-park for both people and bivalves.

These days, more than a few of New York City’s piers – relics of another, more industrial age – are being reinvented as parks and other public spaces, creating challenges both visual and spatial for the designers charged with transforming them. In the case of the Pier 35 redevelopment, on Manhattan’s Lower East Side, SHoP Architects and Ken Smith Workshop had an especially imposing neighbour to deal with: a massive Department of Sanitation shed. What to do? As Cathy Jones of SHoP explains, “you refocus attention to the real attraction,” which at Pier 35 is a delirious view of both the Manhattan and Brooklyn Bridges, the Financial District and Brooklyn.

A slanting lattice wall positioned just in front of the shed now (mostly) conceals it. It is also intended as a trellis for vines, the growth of which is nicely underway. “We wanted a material that would look good before the vines grew,” Jones says of the steel and aluminum screen. “It has a nice moiré effect.” This lattice gives way to a brawny Corten wall along the pier’s corner, where a more surprising feature is embedded: bench-width swings. From this slightly elevated spot on a stepped wooden platform, one also gets an unobstructed view above the pier’s railings. 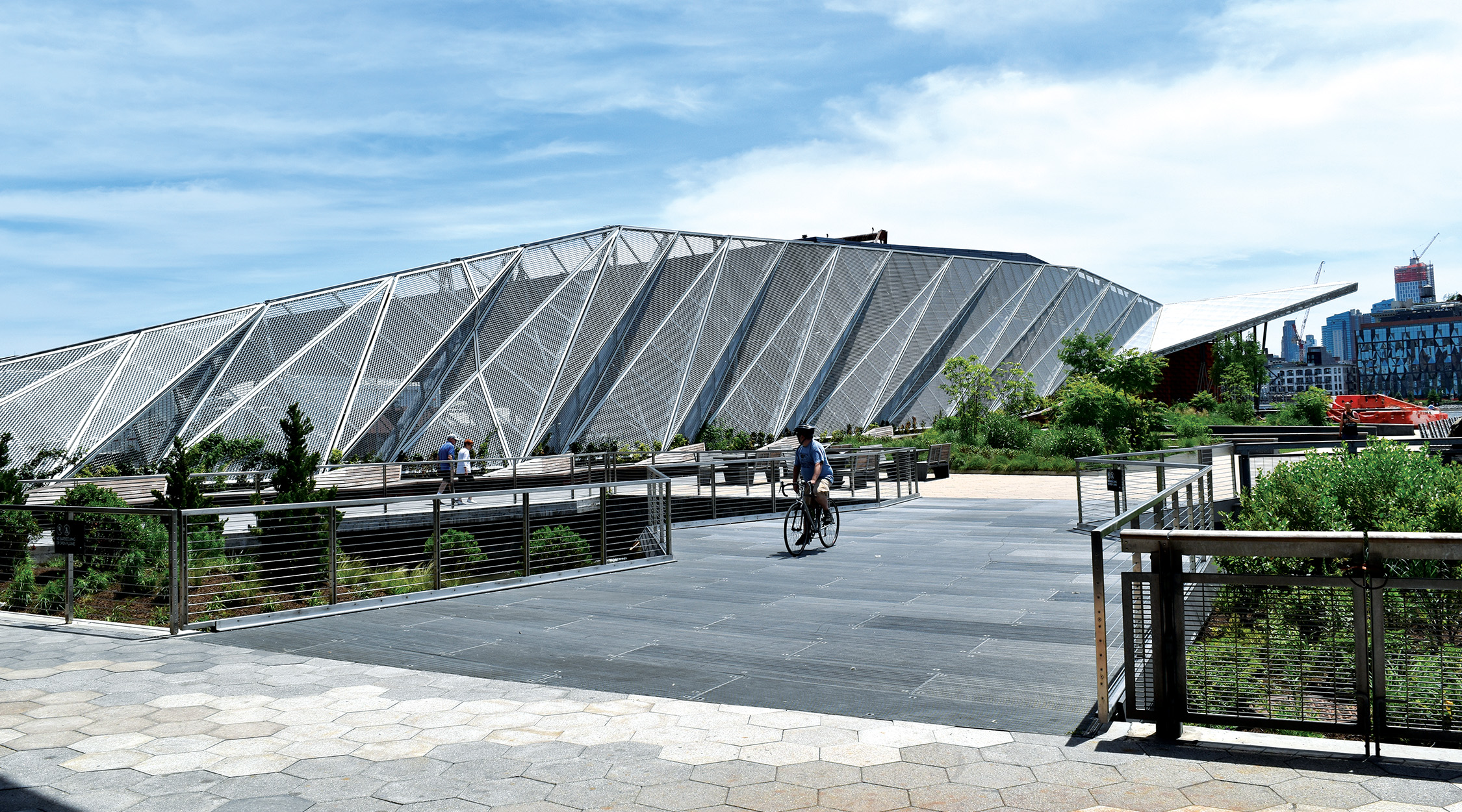 1Composed of triangular screens made of galvanized steel and anodized alumi- num, the wall along the edge of the new park measures almost 11 metres high and 92 metres wide. SHoP’s Cathy Jones describes the feature, meant to support ivy, as “a green billboard.”

2Seating in the park is crafted from high-performance concrete, which permits very thin casting. Topped with wood for a warmer finish, the modular elements nod to the ever-changing configurations of a working waterfront. 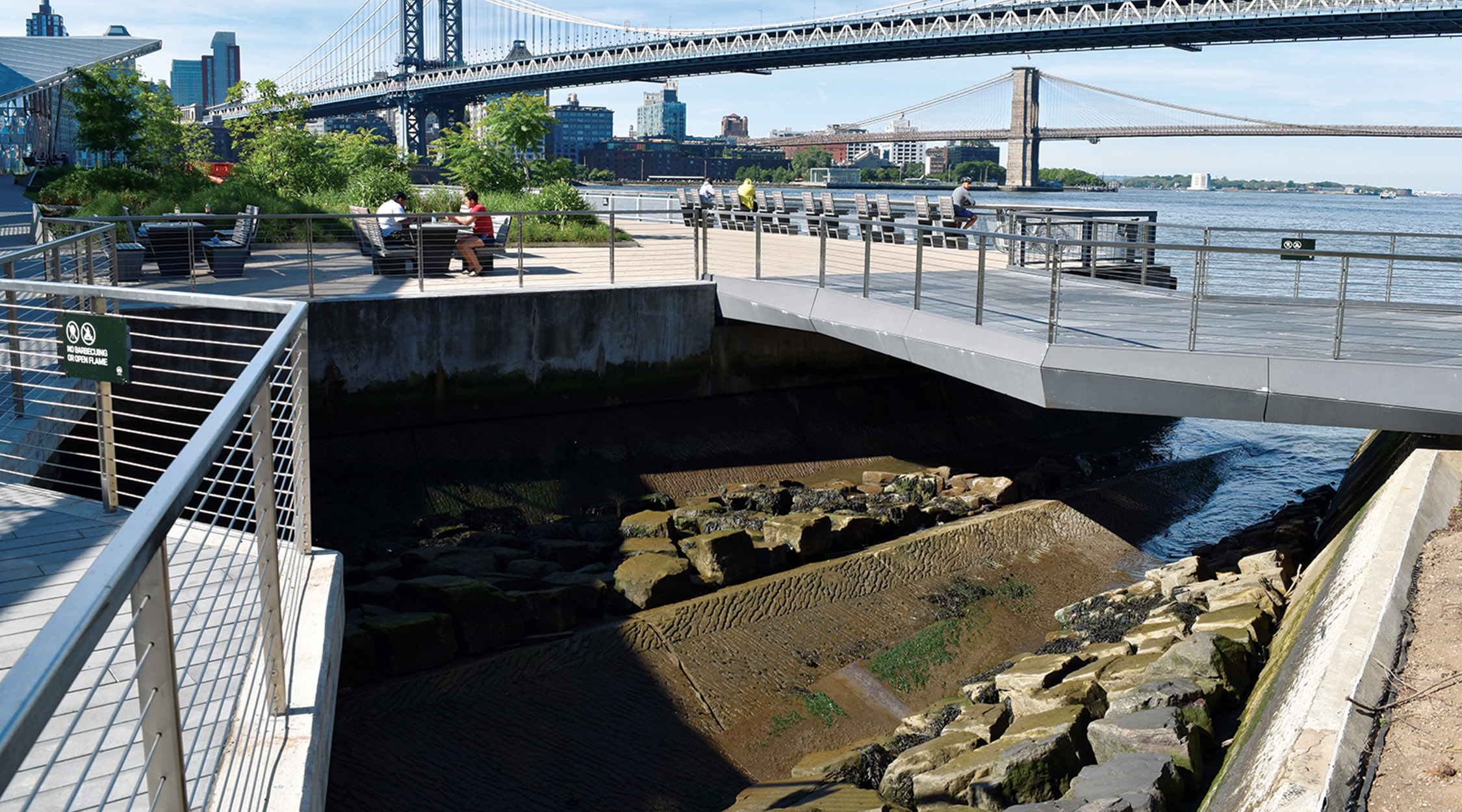 1The mussel habitat turns Pier 35 into a haven for sea life. Ken Smith worked with ecologist Ron Aleveras to design a folded, textured terrain of precast concrete and rock boulders to support colonies of bivalves.

The sound structural condition of the pier enabled the designers to build a grassy slope, divided into diagonal parkette-like segments, right into it. The design also continues beneath the waterline, where a faceted, precast-concrete mussel habitat, studded with rock boulders, was installed in an inlet spanned by a new footbridge connecting two sections of the pier. “Manhattan,” says Ken Smith, “is basically a seawall edge all around, but you don’t generally see the tide. Here, you can actually see the tide rising and falling.” Seawalls can be a bane to intertidal species such as mussels, but not at Pier 35. Here, they have a place to flourish once again.

Shop architects and Ken Smith workshop transform Manhattan’s pier 35 into an eco-park for both people and bivalves.