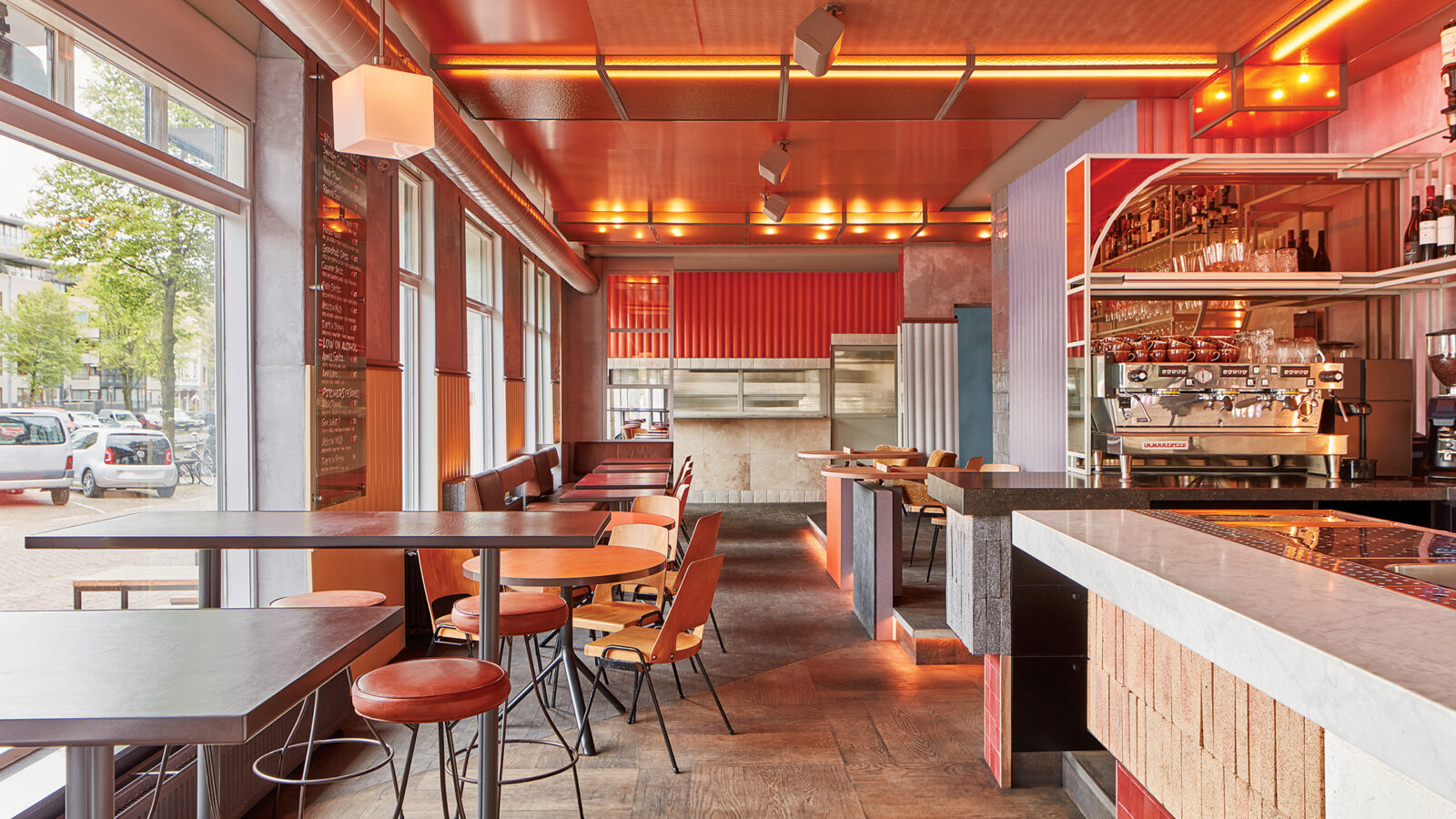 Balanced layers of wood and tile combine with loads of colour and light for an elegantly edge space.

In Amsterdam, brown cafés are as iconic as tulips and canals. Named for their swaths of dark wood covering nearly every surface, these cozy, smoke-stained watering holes are also the inspiration for the warm, rust-hued interior of a new eating and drinking spot, Bar Ramona, in Amsterdam West.

Studio Modijefsky, the interior architecture firm behind the establishment’s concept and design, envisioned the space as one run by a fictional woman – the daughter of a bar owner – who spent her childhood in a brown café. “We imagined Ramona as a girl with a style of her own, who has a taste for funky music and is a bit edgy,” says Esther Stam, Studio Modijefsky’s founder. “If she were to open her own bar, this would be it.”

The bar’s design invokes the elements of its traditional predecessors, but with contemporary spins, including walls coloured in muted lilac, coral-toned chairs from Dutch brand Puik and acoustic wooden ceiling panels juxtaposed with orange light boxes. The 110-square-metre space is divided into a front bar and a raised lounge, the latter delineated by stained mosaic wood flooring.

Layers of walnut, Belgian bluestone, travertine, white marble, dark red Moroccan glazed tiles and two types of bricks made from recycled building materials overlap and coalesce with zest. A sculptural coloured-glass wall cabinet was inspired by the facade’s original stained-glass windows as well as curved beams unearthed during the space’s renovation. The colour scheme of reds, pinks, oranges and blues is echoed by Amsterdam artist Jasper Krabbé’s mural of a young musician near the entrance.

“It’s challenging designing a space that has the right atmosphere for breakfast but also for a Friday night,” says Stam. “It needed to feel fresh in the mornings, but darker and moodier in the evenings.” To facilitate that shift, Stam designed a linear light box system fabricated out of orange textured glass, which emits a pleasant glow during the day and can be dimmed as espresso and avocado toast transition to cocktails and charcuterie. “The glass was a bit of a risk because it’s super old-fashioned,” says Stam. “But in this context, it’s one of the materials that makes Bar Ramona what it is.”

Balanced layers of wood and tile combine with loads of colour and light for an elegantly edge space.