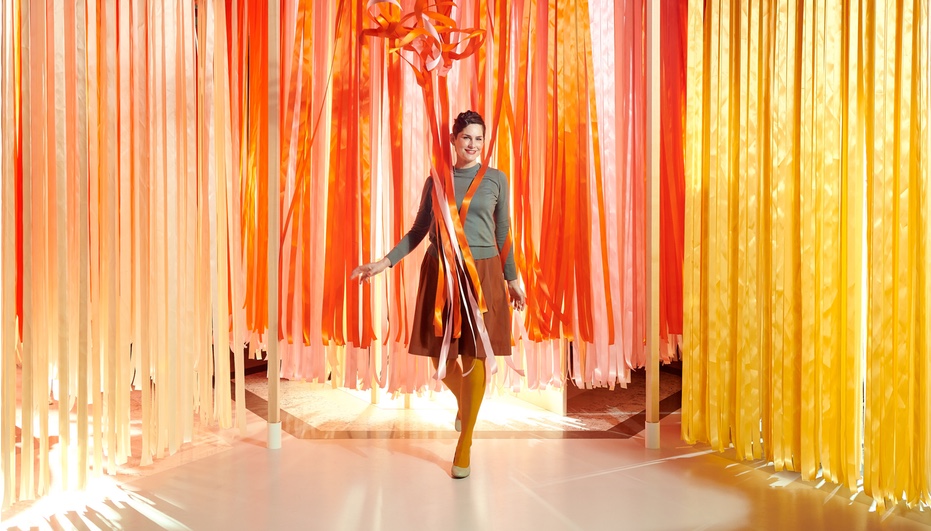 There was an awkward moment or two during my walkthrough of Seeds, the installation that Dutch designer Marije Vogelzang devised in collaboration with Caesarstone and which debuted last weekend at IDS Toronto. One of them saw me trying to force-feed a sticky ball of apricots and grains to another participant through a hole carved into an upright panel of Caesarstone quartz surfacing. If she trusted me, the person on the other side of the wall would take the ball into her mouth. Instead, she stared at me terrified for a moment and asked when was the last time I washed my hands. We both laughed. She took the ball into her hand.

“It’s just making a small connection with another human being, which you would normally not do.” This is how Vogelzang explains what she’s trying to bring about. “But it’s so simple actually. While as humans we have been fed as babies, so that it’s something we know, it’s still very scary.” 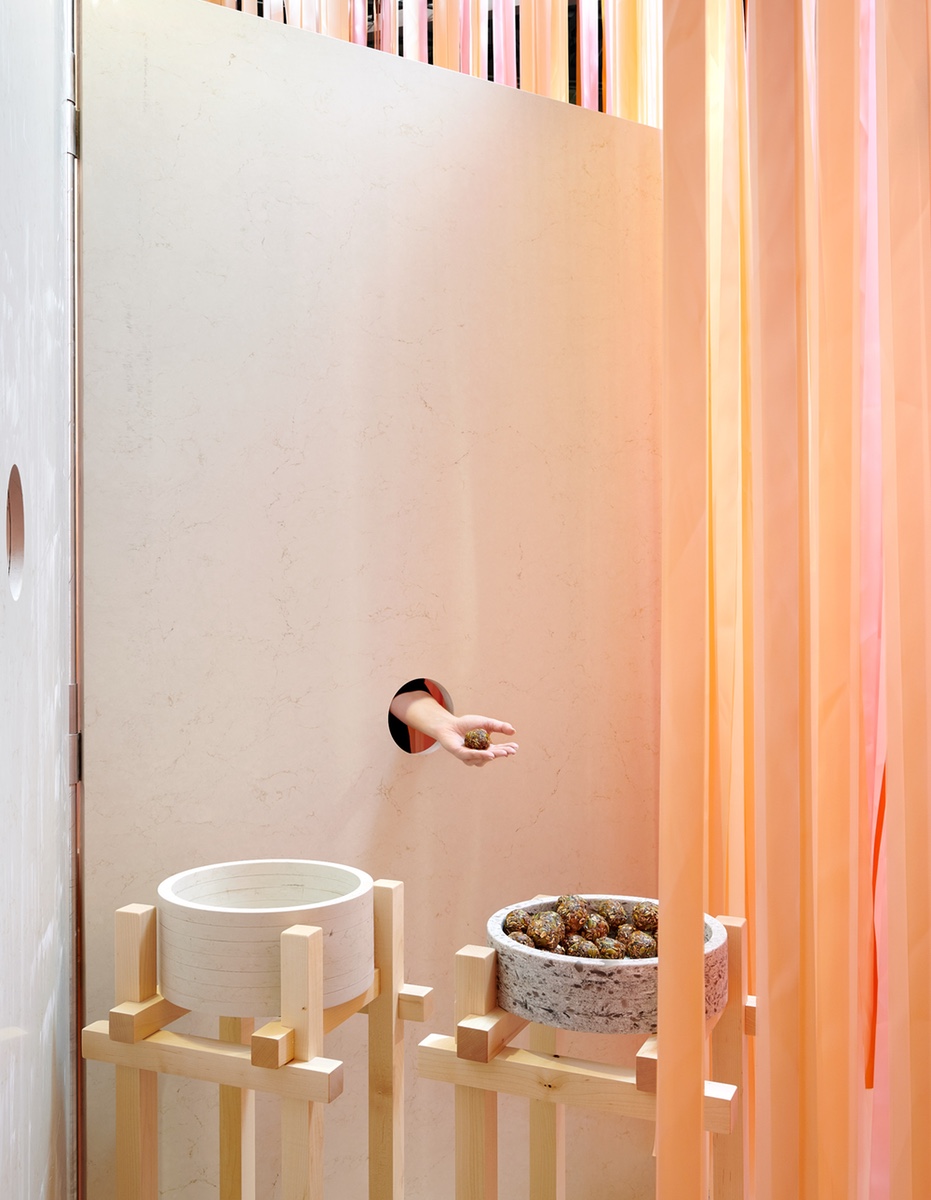 In fact, interactions like this are the stuff of Vogelzang’s oeuvre. The Dutch “eating designer” and director of Design Academy Eindhoven’s Food Non Food department has curated experiences like this around the world. Her work can be provocative (“Eat Shit” was the name of her 2015 Milan Design Week exhibition that explored the stinkier parts of digestion) and downright emotional. One of her most celebrated pieces is Eat Love Budapest, wherein Roma women fed visitors through holes in white curtains behind which they sat and spoke movingly about their lives.

Seeds is a much more whimsical version of this type of sensual experience, one that engages touch, taste, smell and even trust. It’s a departure from Caesarstone’s past collaborations, which while imaginative – Snarkitecture‘s rumination on water, Jaime Hayon’s clownlike cabinets, Raw Edges’ fantastical kitchens – have mostly been static. (Philippe Malouin’s swings were an exception.) “Maybe that’s why they asked me,” Vogelzang says. “I only do design which is immersive. And tangible and intangible, like smells and scents and food, which is obviously not lasting.” 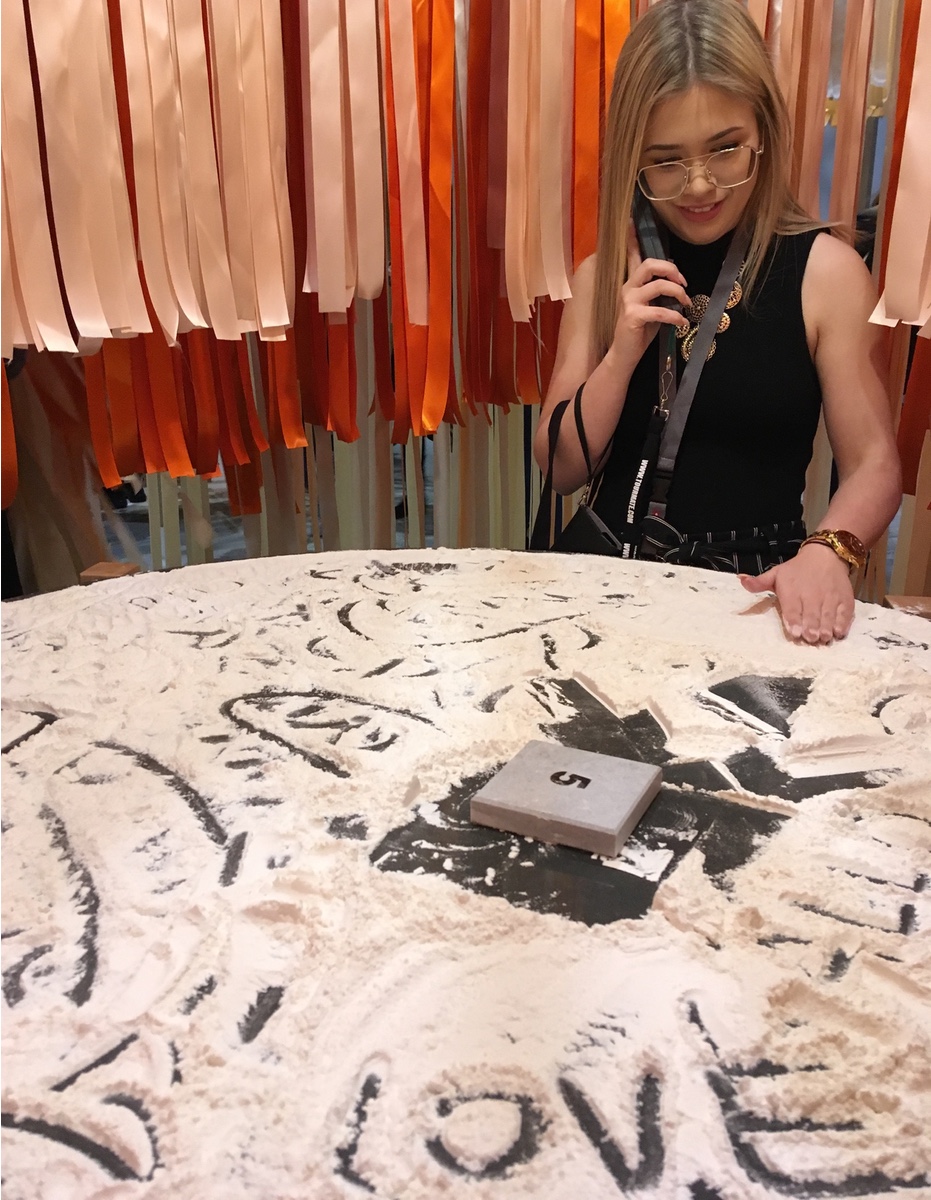 The installation integrates Caesarstone surfacing in a few ways, as flooring made up of concentric polygons and as furniture pieces. Seeds features a variety of vignettes shrouded in vibrant ribbons. Each participant takes a handheld device, punches in a number corresponding to the vignette and listens as Vogelzang leads them on a journey that begins with choosing between a rice seed and a barley seed – each placed on a short column of black Caesarstone – and following its life, from being swallowed to being ground up to being baked into bread.

“You listen to the voice as it instructs you to choose one seed, like the Matrix,” says Vogelzang, referring to the film and the “red pill” meme. “In the Matrix, they say if you choose the red pill, then you will be revealed the truth, and if you choose the blue pill, then you will stay inside your bubble. This is kind of the same, but with seeds.” 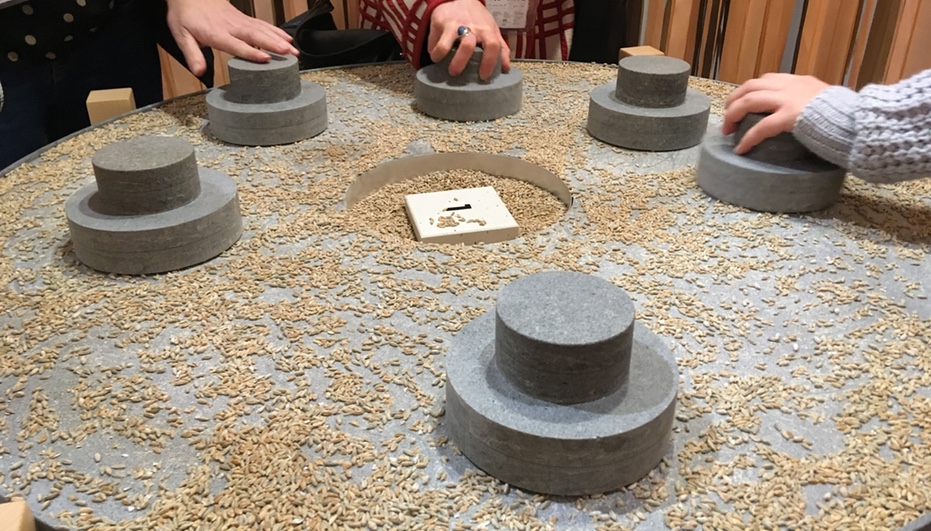 In one zone, participants can manually grind the seeds on a round grey quartz table using heavy circular discs resembling curling stones. In another, little blinis are being served with mascarpone and maple syrup from a countertop made of Caesarstone with an integrated cooktop.

“The seed tells you he’s a bit scared that his friends are being ground up. But it’s so funny, because grinding seeds, it’s like the primordial thing for humans to do to make food. And most of us humans, we eat grains, but we never grind it anymore. So just the act of grinding something you have the sound and heavy stone. And you feel the seeds being crushed, or the grains being crushed, underneath the stone.” 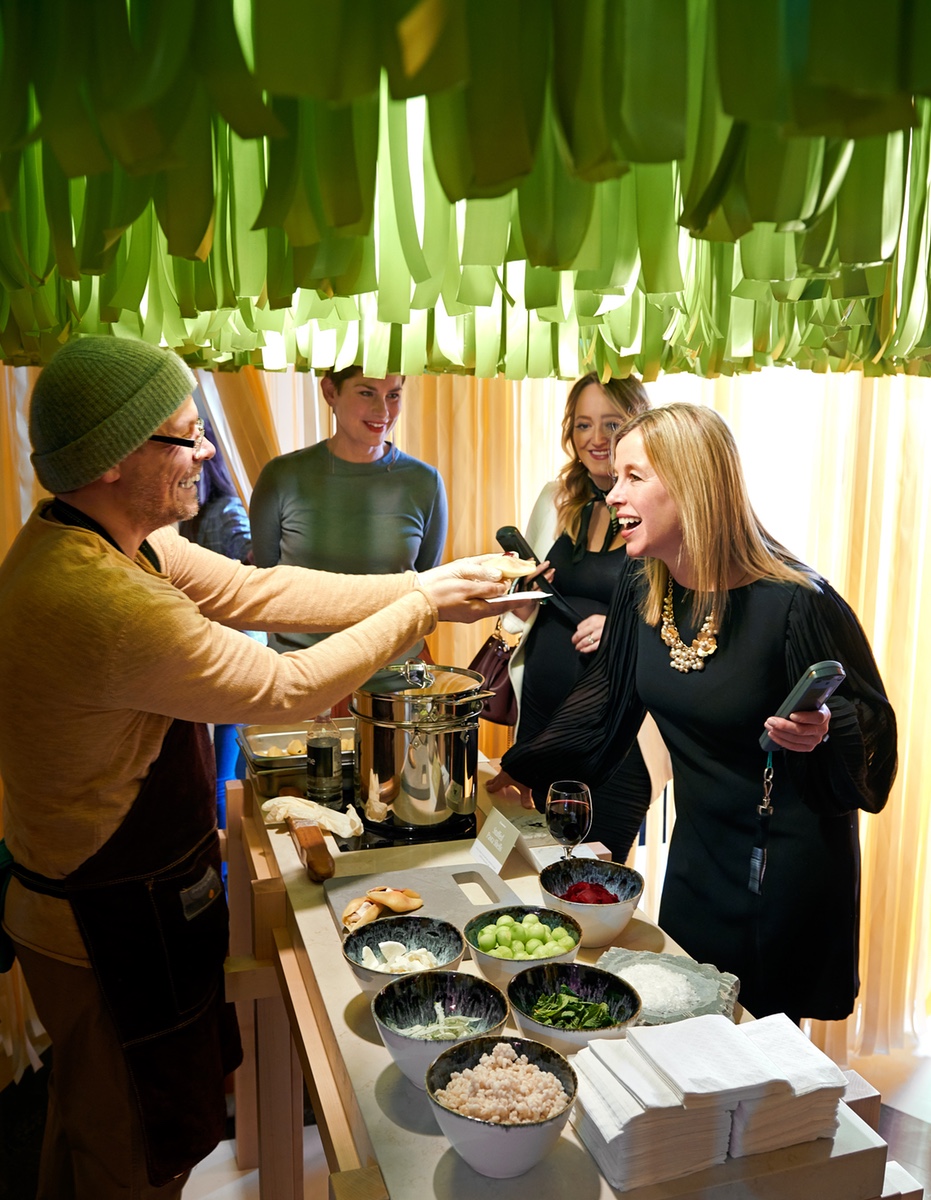 In another zone, a pipe high above the ribbon-supporting scaffold produces a drop of water that disappears into holes punched into the Caesarstone floor. “You actually have to go underneath, and then just taste some water, like the most simple thing. But it’s like with wine. When we talk about wine, we want to pay a lot of money for it, and we talk about the terroir of the wine. But with water, you never talk really about flavour of the water, whereas actually water has a very distinct different flavour from one kind to the other.” 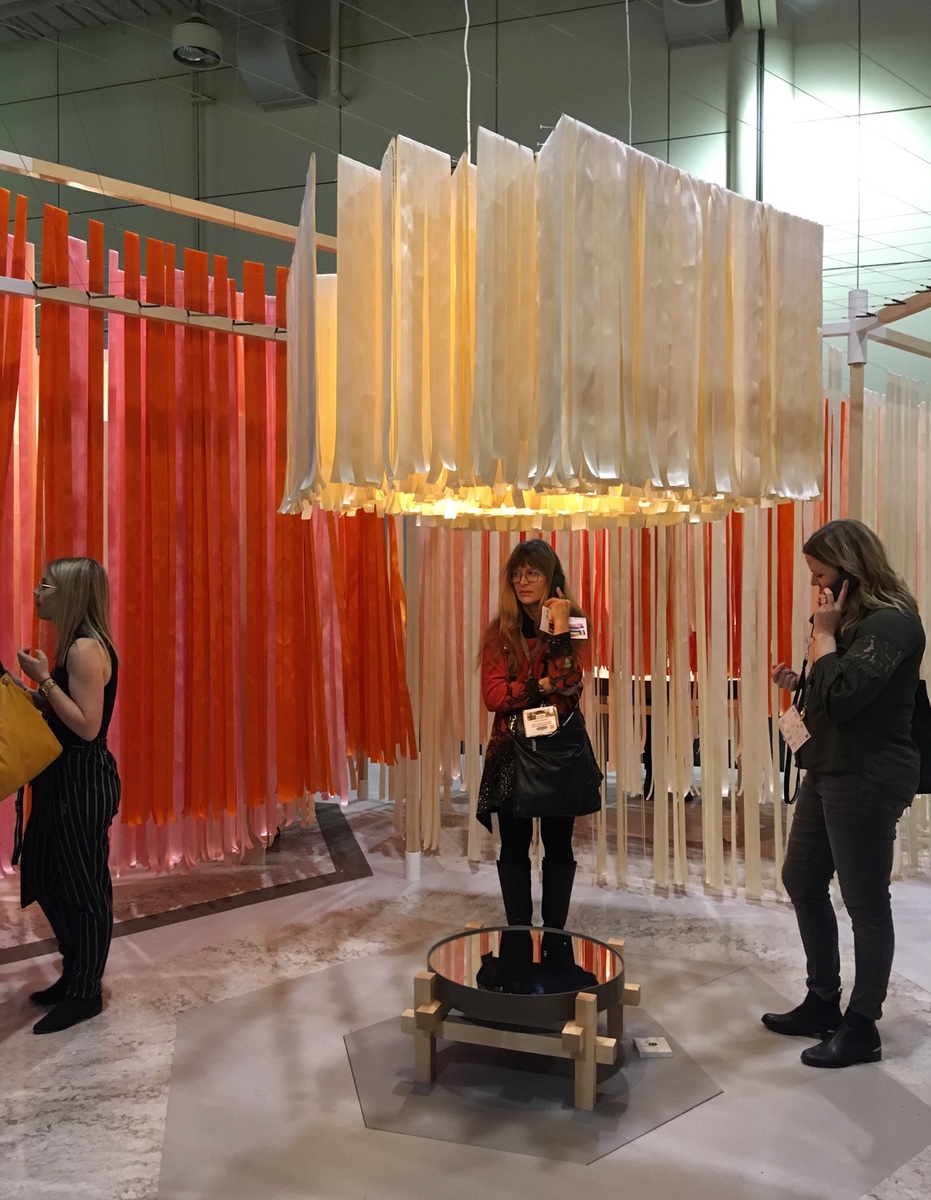 At IDS Toronto, the installation was a calm getaway from the show floor even though it was integrated into the show floor. Its meditative quality was a reminder to take things in from different perspectives, various channels. And this is at the core of Vogelzang’s mission.

“I think that is the most challenging thing, and then to bring that all together, then you can really appeal to someone as a whole, instead of only walking eyes. Because I think that’s how we see people now. They’re just brains with legs. Brains and eyes with legs. We don’t really touch things, we don’t smell.” 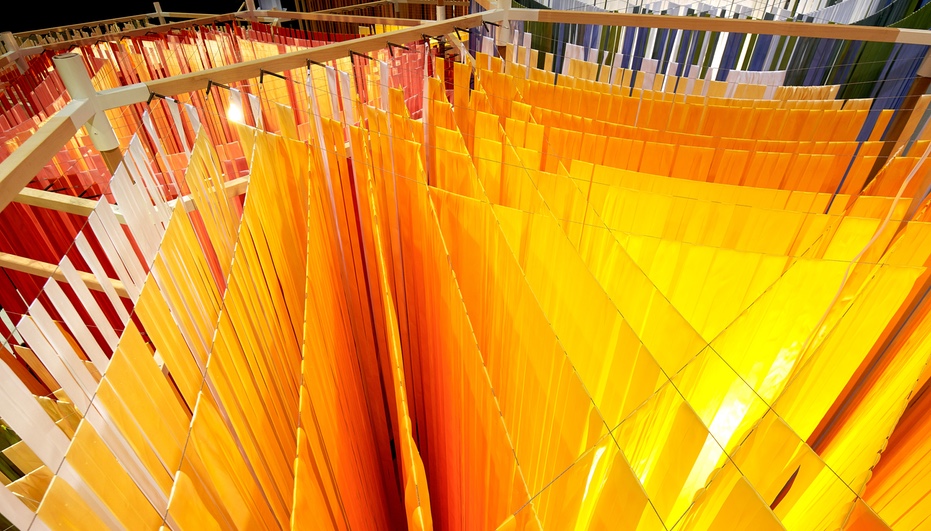 Seeds will hopefully encourage people to touch, smell and taste. And as with Caesarstone’s previous installations, it is expected to do so while touring the world throughout the year.