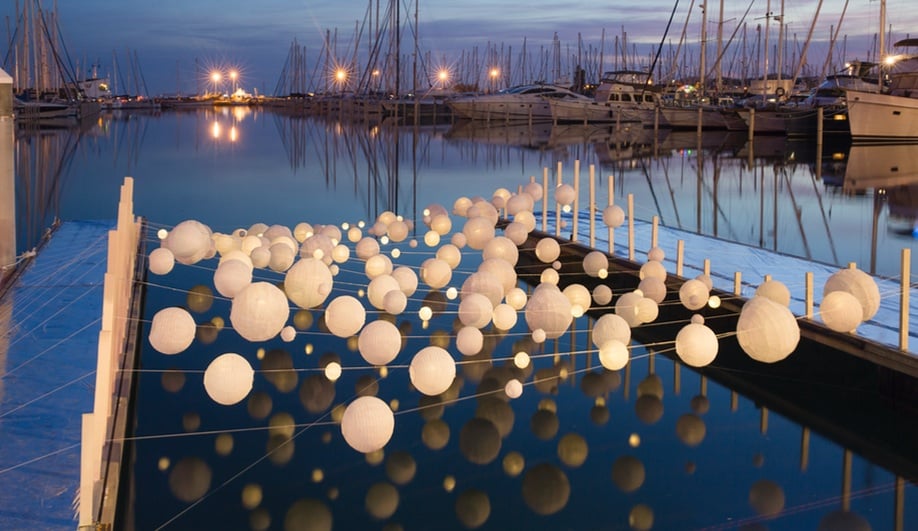 During the annual Festival des Architectures Vives (which just completed its ninth edition in Montpellier, France, and its second in nearby La Grande Motte), emerging architecture and design practices created dozens of site-specific installations that enticed visitors to engage with the cities’ tucked-way spaces in new ways. Just like Quebec’s annual International Garden Festival, these works make a strong case for inserting playful micro-landscapes throughout the city and beyond. Here’s a look at just a few of the highlights from this year’s festival, responding to the theme of “Sensuality.” 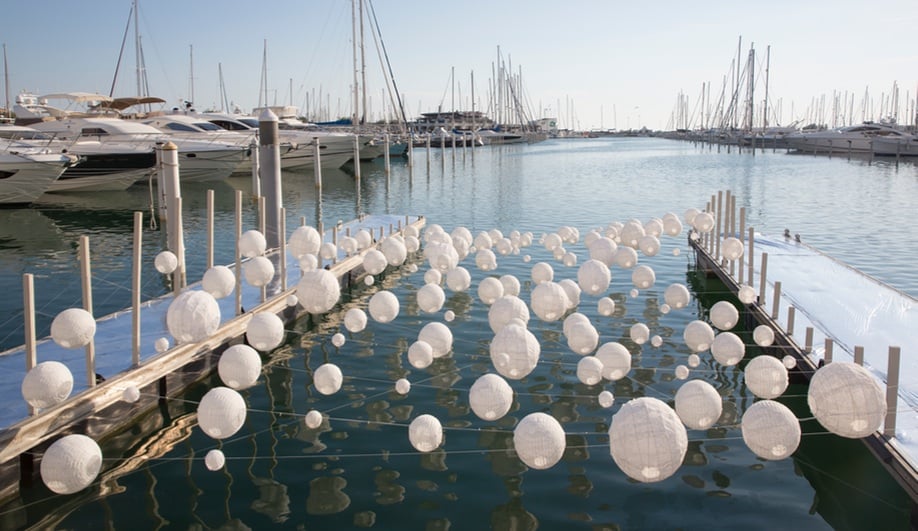 1 Onde Sensuelle by Alexandre Arcens and Marion Moustey
This “sensual wave,” spanning a boatslip in the harbour of La Grande Motte, is a simple construction of paper lanterns suspended on wire, but the effect is powerful – especially after dark, when the lanterns come to life. The lights form a subtle double-curved plane that lends the installation its name. 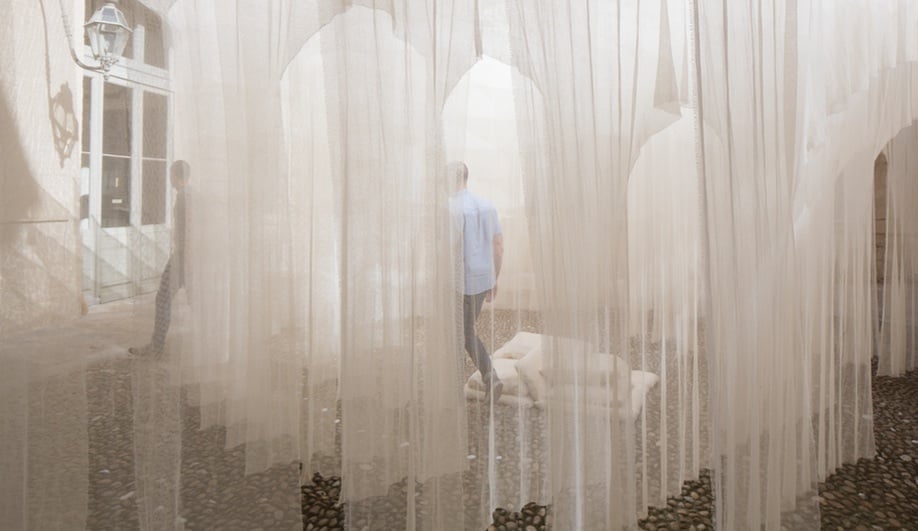 2 Voilage Voilage by TTT Architectes
Many of FAV’s installations occupied the stone courtyards of multi-unit residences and hotels – semi-public areas common throughout urban France. The name of this installation by Gaetan Morales and Antoine Pascal means “Veiling;” the layers’ gauzy tulle, made by 127-year-old lace manufacturer Sophie Hallette, are cut to form openings that direct visitors along a circuitous path through the Hôtel de Lunas in Montpellier. 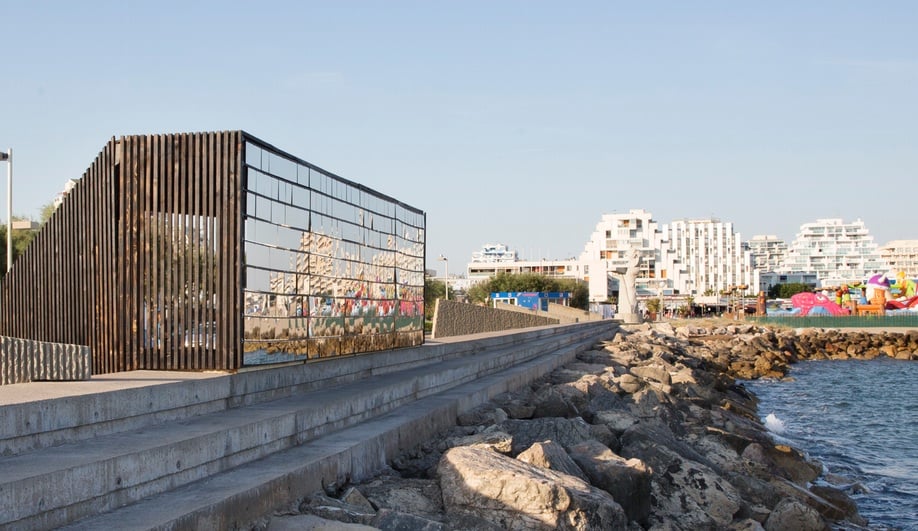 3 Breath Box by NAS Architecture
It’s no accident that this pavilion looks out over the sea. Its grid of polished-metal panels, affixed with hinges that allow them to lift as the wind passes through, is meant to mirror the movement of the waves, both literally and symbolically, so that the constantly changing facade mimics the ever-moving surface of the Gulf of Lion. 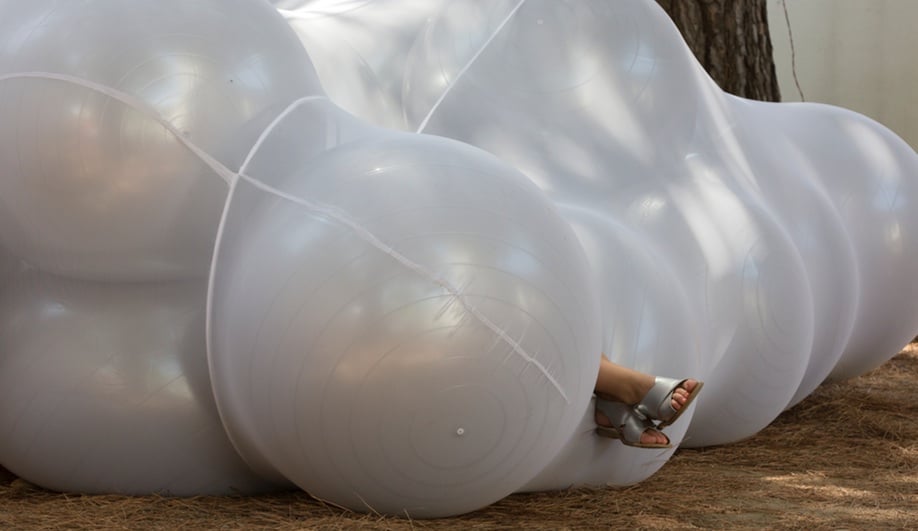 4 Cloud Garden by D.O.T.S.
To entice art lovers not just to visit but to sit and stay a while, Design Office Takebayashi Scroggin filled a shady courtyard in La Grande Motte with several “clouds.” The oversized, shape-shifting furniture was fabricated using only standard exercise balls inside a nylon sheath, but the interactivity of the sculptural furniture was a hit with guests of all ages. 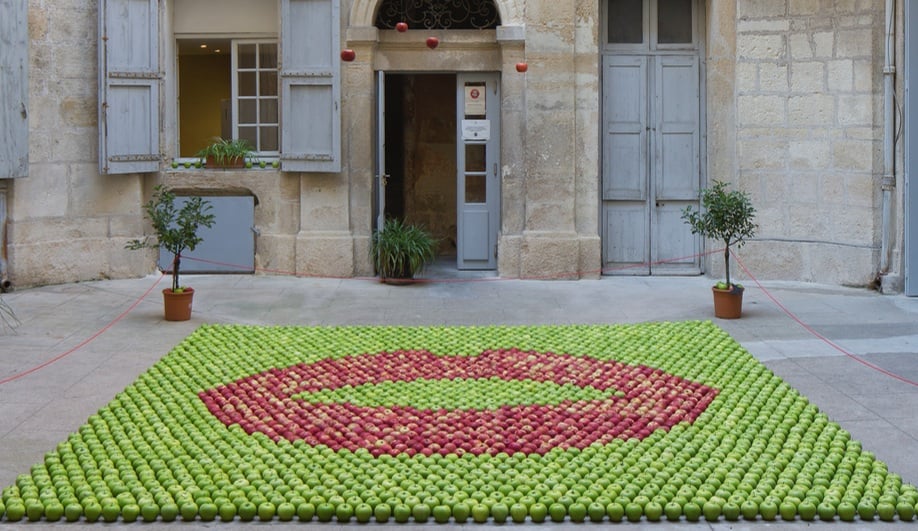 5 Croquer la Pomme by Heams & Michel Architectes
Drawing on a wealth of associations from Raphael and Magritte to more pop-infused sources like Disney’s Snow White, Croquer la Pomme (“Bite the Apple”) uses fruit as its only medium. Installed at the courtyard of Montpellier’s Hôtel d’Aurès, and highly visible from all the suites overlooking it, the sculpture was de-installed by the guests, who were invited to help themselves to a snack as the festival drew to a close. 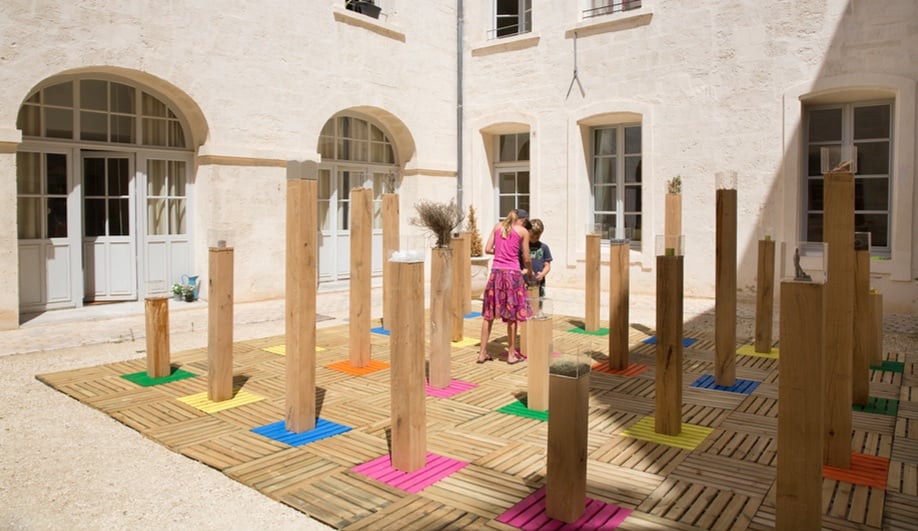 6 Colibri by Reset Studio
Reset Studio – a young architectural firm comprising Julien Thirion and Jae Young Choi – chose 24 local artifacts, including rare flowers, sand and olive oil, and placed them atop wooden pillars on a colourful deck. Visitors were invited to move from pedestal to pedestal, taking in the sights, smells and textures of local culture – a gesture that gives the work its name: “Hummingbird.” 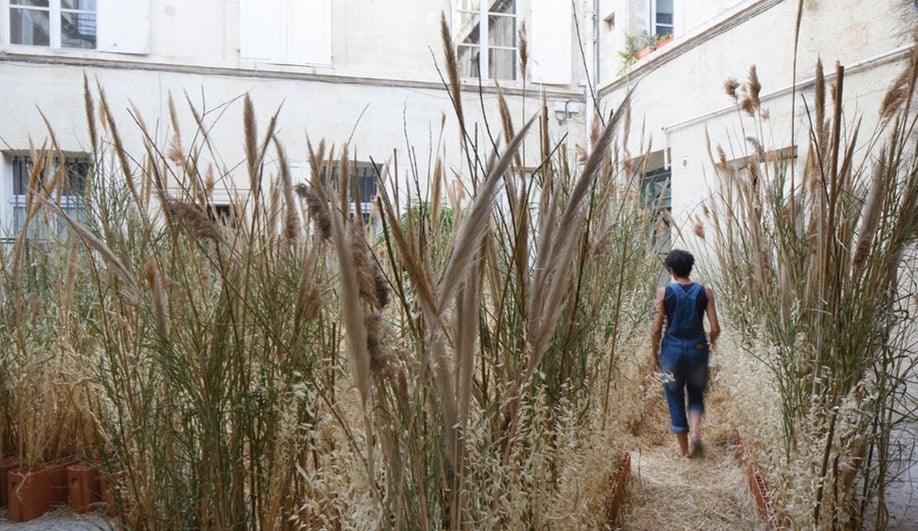 7 Cache-Cache by Marie Beniguel, Johana Boktor and Frédéric Madre
An “ode to the love of the fields,” Cache-Cache (“Hide and Seek”) recreated a lush grassy pasture outside Montpellier’s Hôtel d’Audessan. At the centre of the installation, a four-poster bed, blanketed with dried grasses, urged visitors to relax and stay a while. 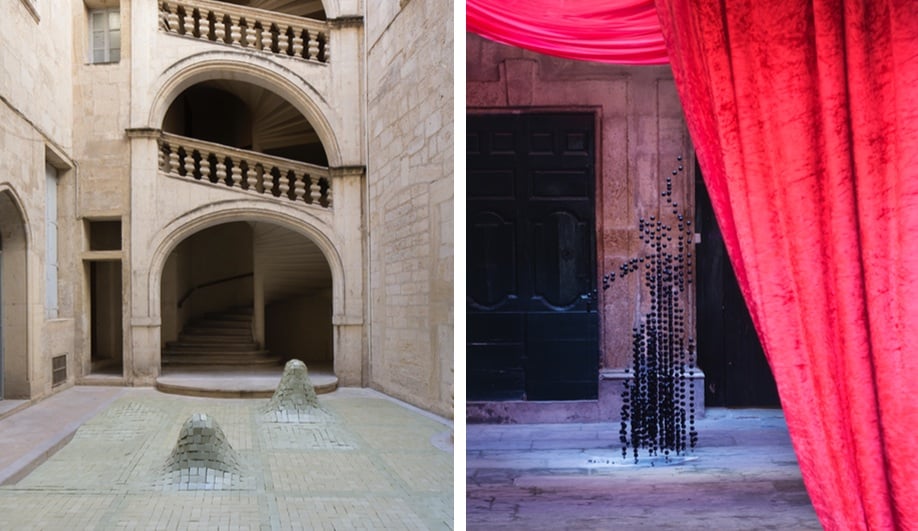 8 Savon by MoonWalkLocal (left)
Riffing on the ancient cobblestones of Montpellier’s streets, MoonWalkLocal filled a courtyard at the Hôtel de Mirman with some cobblestones of their own, which rise and fall into depressions and odd protuberances. But these unusual stones were formed from soap; as visitors walked over them, they released an invigorating fragrance, and took on the patina of a path worn by centuries of use.

9 Si Tu Veux, Je Danse by Florence Balestrieri and Carmen Vazquez Moreno (right)
Passing through a theatrical red curtain, drawn by the sounds of flamenco music, visitors to Montpellier’s Hôtel de Philippy were greeted by the silhouette of a woman frozen mid-dance. The figure, composed from a cluster of black spheres suspended from wires, creating the suggestion of movement even in a static pose. 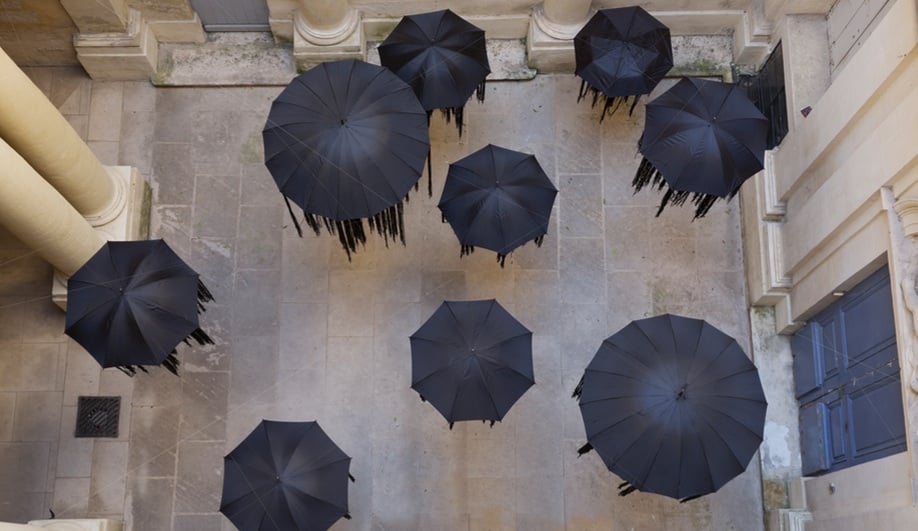 10 Medusa by Alban Guého
Paris architect Alban Guého gave the festival’s theme a darker spin, filling the a courtyard at the Hôtel de Griffy in Montpellier with floating heads of Medusa – the seductive Gorgon borne of ocean-dwelling monsters. The jellyfish-like objects were a simple combination of black umbrellas and wool fibres; seeming to float in midair, they evoked a weightless, underwater atmosphere as enchanting as Medusa herself.