2013 in Review: Top 10 Architecture Projects
Renzo Piano's Shard in London, SANAA's ethereal Louvre-Lens in the north of France, and a summerhouse in Stockholm count among our favourite buildings of the year. 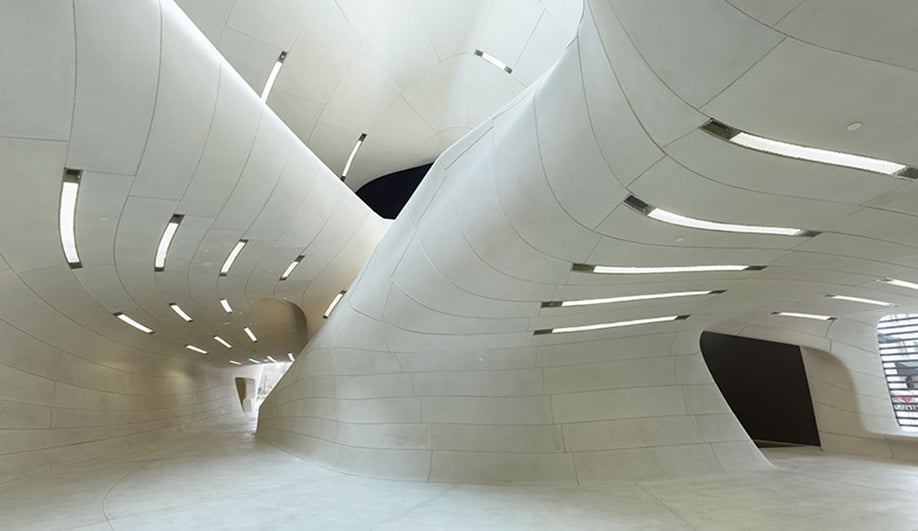 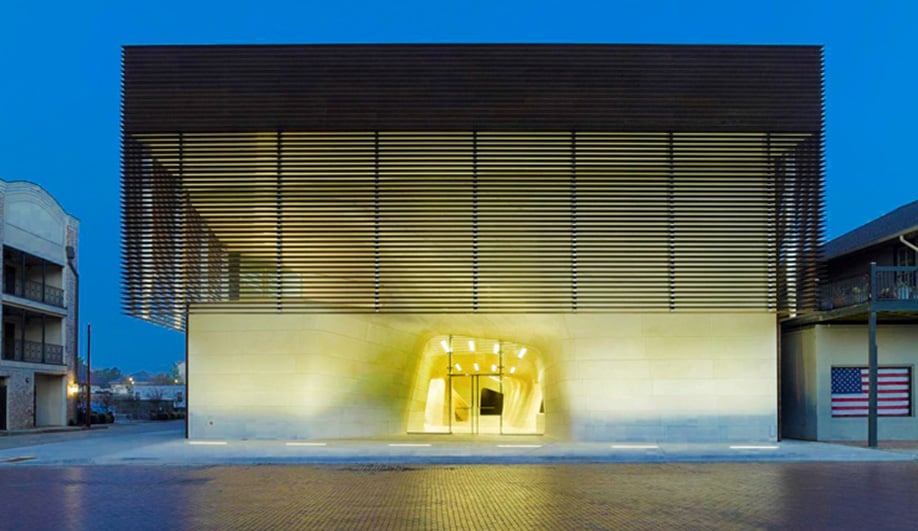 Restrictions can be a source for creative inspiration, and with this museum, designed to exhibit art along with sports memorabilia, limitations were everywhere. Besides bringing together two divergent collections, Trahan Architects of New Orleans also managed to build a stunning landmark while respecting the two-storey structures that surround it. Of equal height, the museum’s defining gesture is its exterior composed of pleated copper panels that control light, views and ventilation.

Inside, the space becomes wildly organic with a sinuous Great Hall and circulation spine clad in white stone connecting the museum galleries and the hall of fame with various supporting spaces, including a bookshop, a gift shop and classrooms. Any metropolis would be proud to have such a powerful building. What’s great is that this new museum is located in Natchitoches, Louisiana, with a population of just 18,299. 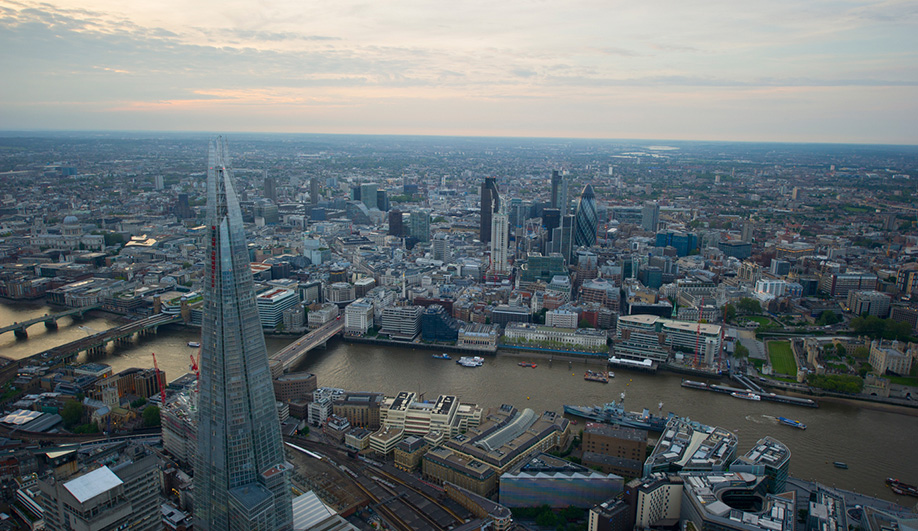 2 The Shard in London, by Renzo Piano Building Workshop

In February, the Shard became London’s highest point, rising 308 metres above the Thames. Designed by Renzo Piano, it is as lean and narrow as its name suggests with a base that is just 50 square metres and a pencil-sharp tip that on most days simply vanishes into the clouds.

The observation deck, 72 stories up, includes an upper level exposed to the sky, where visitors can scan over most of London, including the city’s dramatically changing financial district, where Norman Foster’s Gherkin is now surrounded by Rafael Vinoly’s “Walkie Talkie” tower (expected to reach completion in early 2014) and Richard Rogers’ forthcoming “Cheesegrater.”

Piano has had a busy year, and The Shard is only one of a few buildings the Italian architect has cut the ribbon on, making it hard to choose which stood out as his best. A close second is the newly opened Kimbell Art Museum Pavilion in Fort Worth, Texas. The fritted glass roof echoes the vaulted forms of the original museum next door, famously masterminded by Louis Kahn in the 1960s. 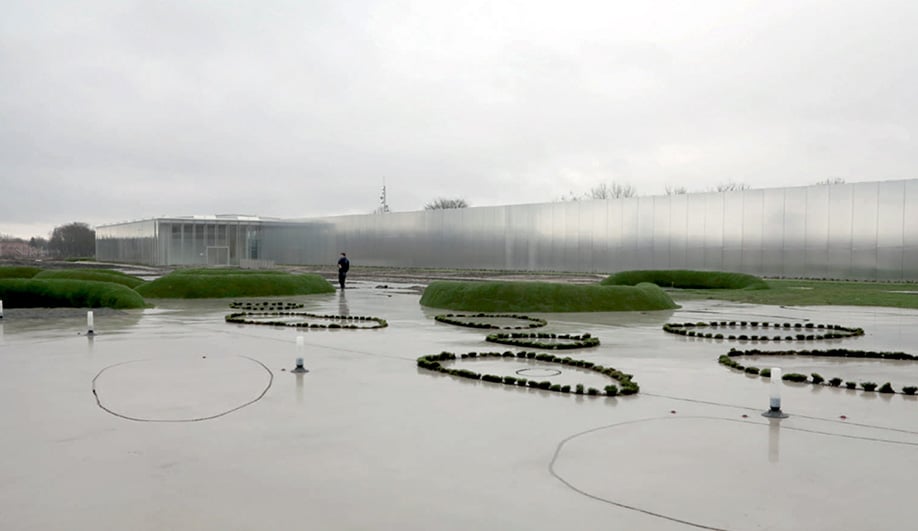 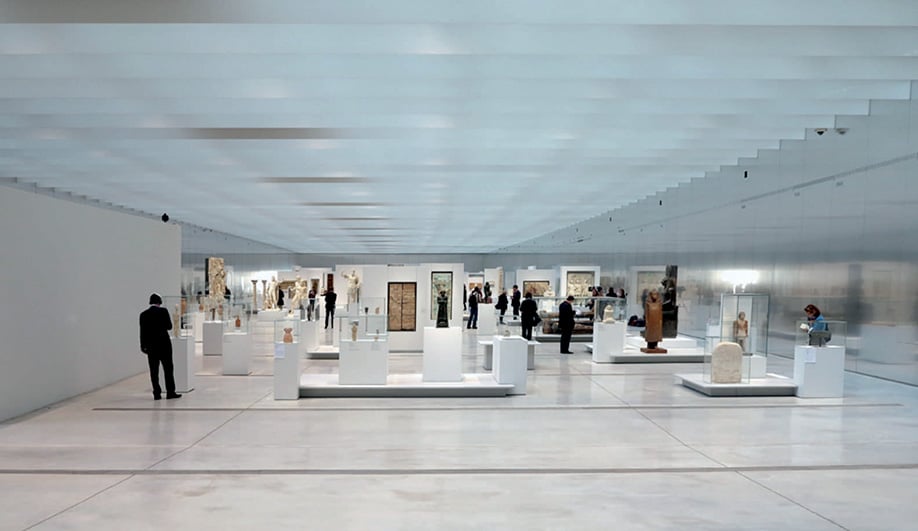 3 Louvre-Lens in Lens, Northern France, by SANAA and Imrey Culbert

I.M. Pei was the first to conquer the daunting task of adding to the Musée du Louvre, with his courtyard Pyramid. New York’s Imrey Culbert and Tokyo’s SANAA are the next generation to reimagine Europe’s richest art history archive with Louvre-Lens, the first in a series of annex locations planned by the Paris-based museum.

In the fall of 2012, when SANAA’s Ryue Nishizawa was delivering a talk in Toronto, he described the idea behind the project and of creating a museum without walls. In fact, Louvre-Lens, which officially opened in December 2012, appears as though it has no structural confinements other than a roof and floor. Its single-storey diaphanous walls are made of reflective polished aluminum and in a certain light they verge on disappearing altogether.

Visitors walk the museum’s five buildings from end to end, wandering through six centuries of art. You can physically witness the unfolding of civilized history along a curving route that also follows the site’s hillside terrain. The architects collaborated with Paris landscape architect Catherine Mosbach, who surrounded the buildings with gardens and pathways, while the museum’s exhibition spaces were designed by Studio Adrien Gardère. 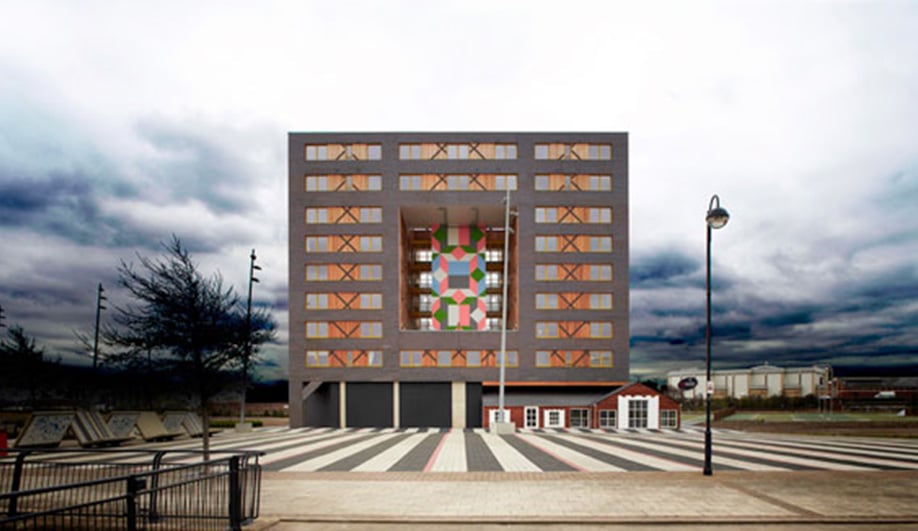 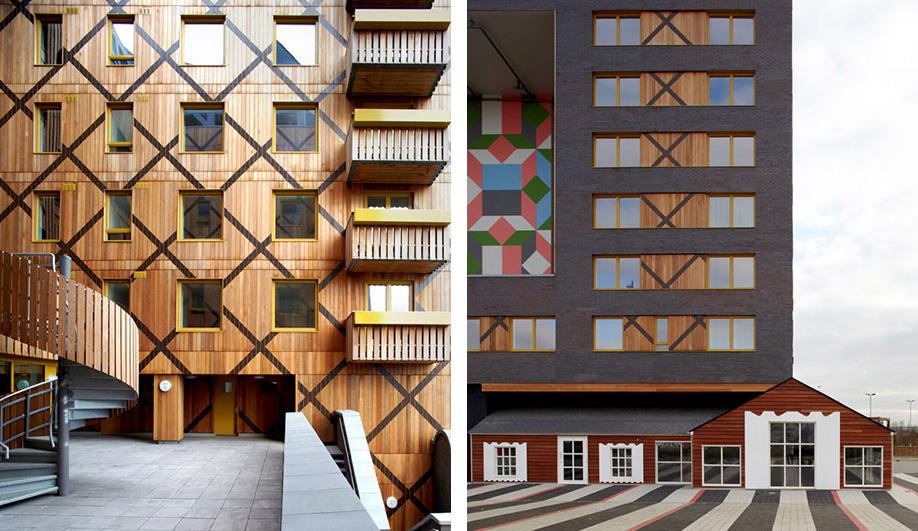 4 Community In A Cube (CIAC) in Middleborough, U.K. by FAT Architecture

The soon-to-be-defunct London firm FAT, which stands for Fashion, Architecture, Trend, isn’t everyone’s cup of tea, but in an era of generic towers rising with frightening speed (in Toronto, over 100 highrises are currently under construction), a radically “different” look is a welcome vision. It’s also inspiring to know some developers are still willing to let architects work beyond convention.

FAT’s Community In A Cube is playfully unconventional in every way. Comprised of 82 mixed-use units, courtyards and garden spaces, the structure sports two gable-roof houses on its rooftop and a Swiss chalet at its base, as though the nine-storey building sprouted from the ground like a tree and displaced whatever was in its way. It’s hard not to read CIAC as anything but a metaphoric freeze-frame between old and new, and its oddness fits in with its environment as the latest addition to Middleborough’s docklands revitalization plan, originally drawn up by Will Alsop in 2004.

The post-industrial site is now littered with other “novelty object-buildings,” as the Guardian’s architecture critic Oliver Wainwright calls them. He described CIAC’s equally dorky neighbours this way: “At one end, a giant teddy bear sits next to an office block in the shape of Marge Simpson’s hair; at the other, a “Gucci glove” by Nigel Coates reaches out to caress a hotel modelled on the marble game Kerplunk.” FAT’s new building fits right into one of the most novel urban villages to be built in decades. 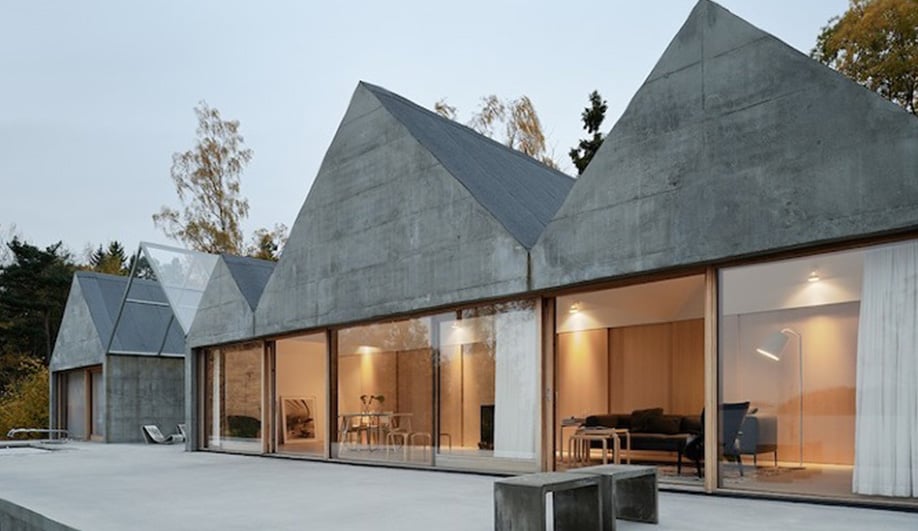 A minimalist’s interpretation of the peaked-roof home has become a perpetual post-modern trend. We continually receive submissions of houses that show off some variation of the gabled roof, whose form alone implies warmth, even if there is no chimney. Summerhouse Lagnö, located on a Stockholm archipelago and designed by Tham & Videgård Arkitekter, plays with the traditional roofline with a row of five triangles cast in concrete.

Inside, the smaller rooms, which vary in size and height, make up the entrance, bath, kitchen and bedrooms. Larger spaces are for the living and dining areas, with ash-framed glass doors opening up to a terrace, outdoor pool and views overlooking the Baltic Sea. Earlier this month, the project won the 2013 House of the Year Award from World Architecture News. 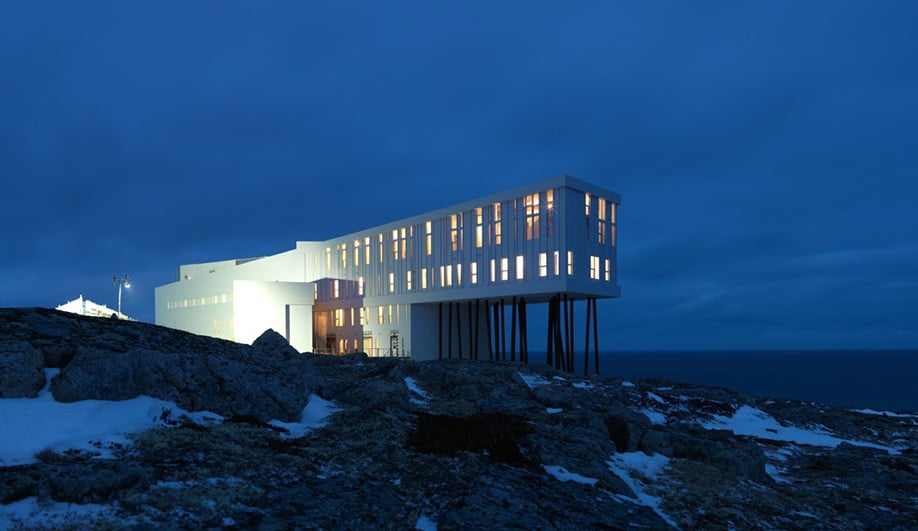 We have followed the evolution of Fogo Island since 2010, when entrepreneur Zita Cobb launched the first of many artists’ studios on Canada’s most eastern outpost. This year, Cobb and architect Todd Saunders outdid themselves with the opening of Fogo Island Inn, a 29-room hotel that appears to walk across the tundra like a prehistoric creature.

The inn reflects Saunders’ dual citizenship: while he was born in Newfoundland (and educated in Montreal), he now practices in Norway. The convergence of both northern cultures can be seen in pared back materials (Norway) verses the coastal architecture of Newfoundland where subzero weather means perching buildings on legs.

Everything about the inn has drawn international attention. Its restaurant, headed up by chef Murray McDonald, was listed among the top 10 new restaurants in the country, according to Enroute’s food critic and Azure contributing editor Andrew Braithwaite. Its interior furnishings are a mixture of pieces made by local artisans and various European designers working with local craftspeople (the red benches are by Dutch designer Ineke Hans). 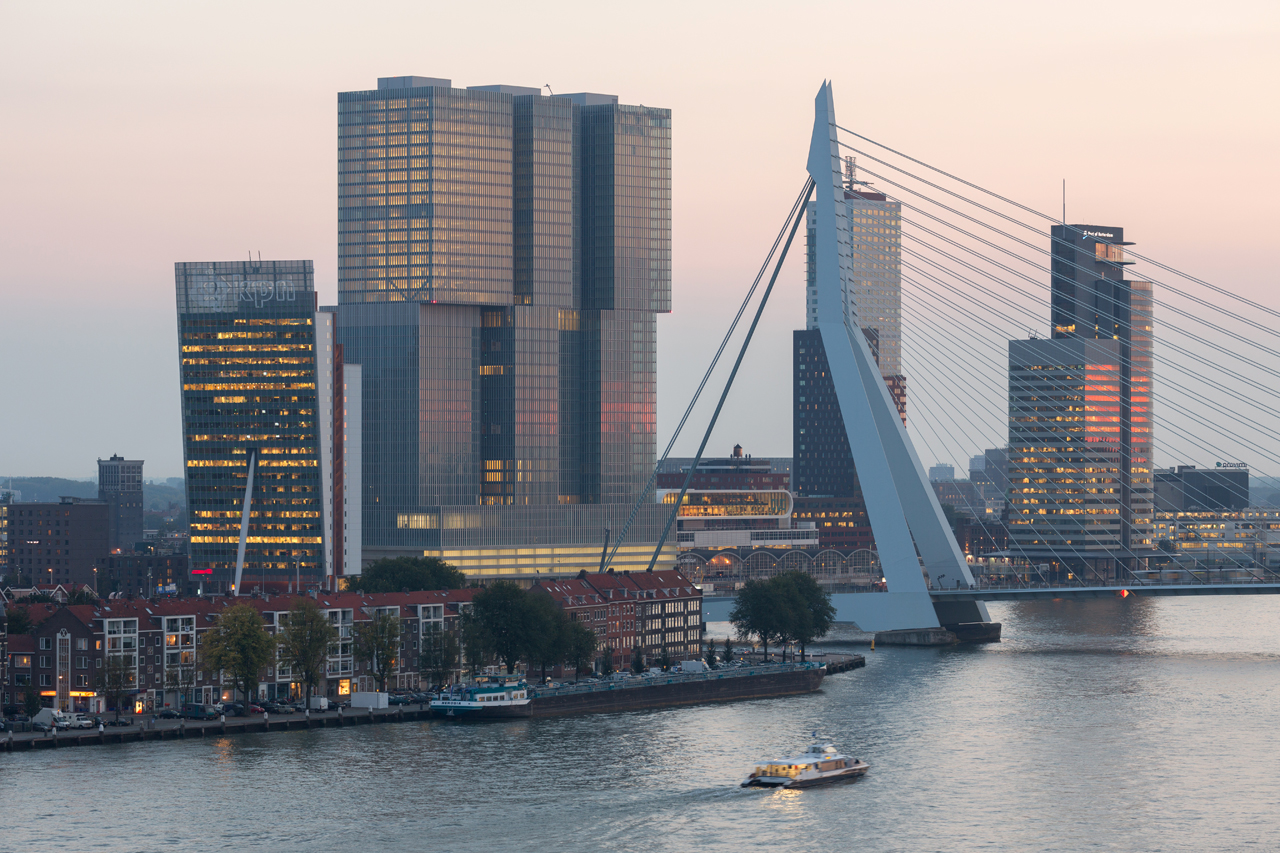 7 De Rotterdam in Rotterdam, by OMA

There were many firsts in 2013, among them De Rotterdam, OMA’s first building to be completed in the city where its principal and visionary, Rem Koolhaas, was born and still practices. At 162,000 square metres, it is also the largest multi-purpose building in the Netherlands, with one third of its 44 stories devoted to a hotel, another third to apartments and the remaining space given over to offices.

Clad in a curtain of aluminum mullions, the three-tower structure looks like a stack of off-kilter boxes, a Lego-like profile that has been seen before with OMA – earlier this year, the firm completed the Shenzen Stock Exchange, which many critics described in various ways as a building made up of monolithic slabs. Koolhaas’s aesthetic is built on logic and pragmatism, and for him the decorative tends to come from elsewhere. In this instance, it stems from the Erasmus Bridge designed by UNStudio in 1996. Koolhaas arranged the De Rotterdam to have only one entry point, and to reach it entails crossing the bridge. 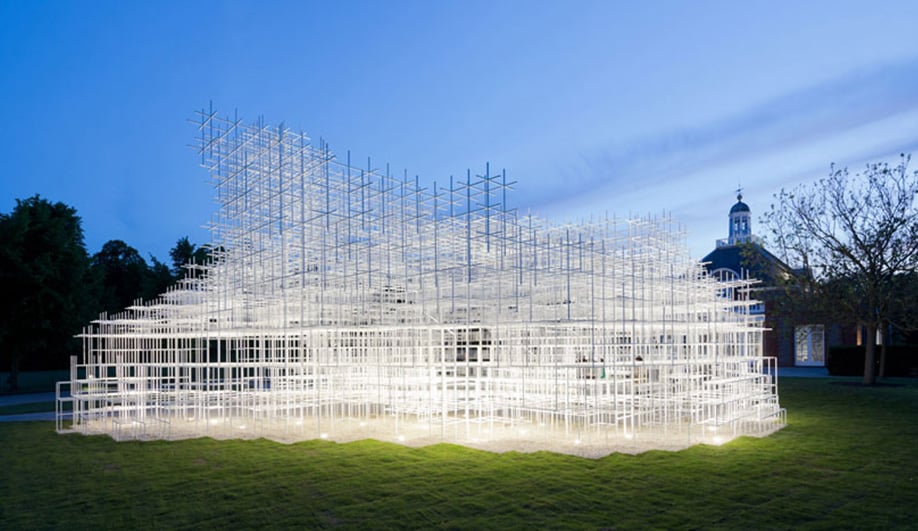 At 41, Sou Fujimoto became the youngest architect to receive the commission to build the Serpentine Pavilion, a temporary outdoor space for London’s Kensington Gardens. The honour is a rite of passage for international architects, and the alumni include Toyo Ito, Peter Zumthor and Ai Weiwei.

Open from spring to autumn, Fujimoto’s structure was designed to reveal invisibility, a feat he has accomplished before. Last year, we named his House NA in Tokyo as one of the best residential projects of the year for its daring employment of all-glass walls. The pavilion is similar, with its lattice of 20-millimetre-thick steel rods making up a series of cube-shaped frames. Clear plastic sandwiched between the rods allowed visitors to climb the structure, and from a distance seated guests looked as though they were riding on a cloud. 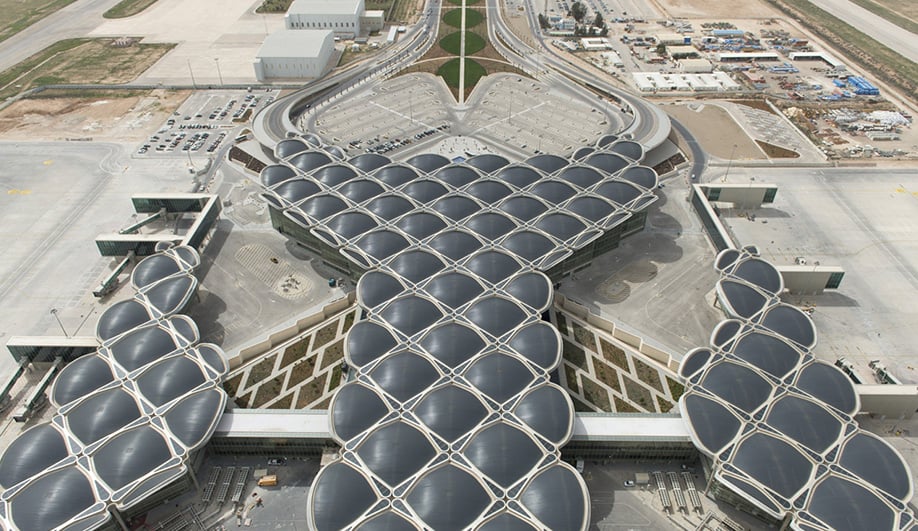 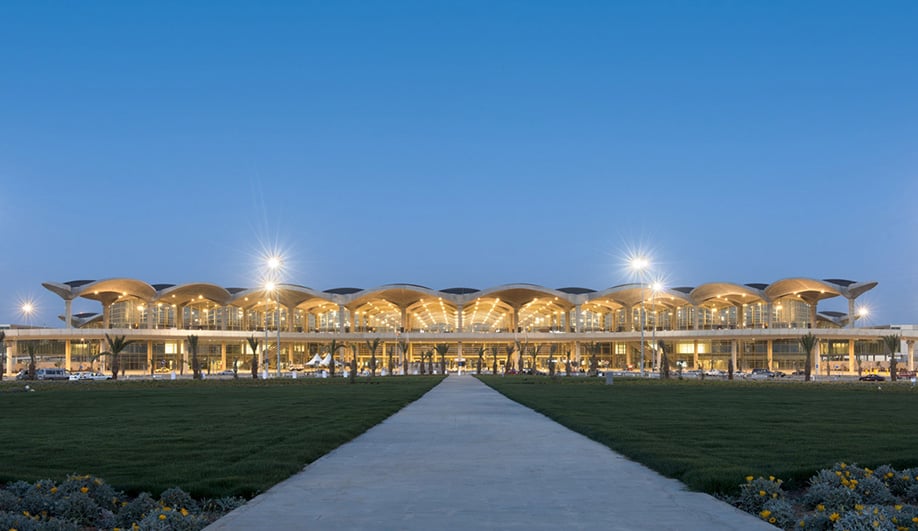 Air travel isn’t as glamorous as it once was, but international airports are still status makers for cities aspiring to become international hubs. Earlier this year, Amman made its global ambitions clear with the opening of the Queen Alia Airport by Foster + Partners. Dramatic inside, outside and from above, the terminal is designed to absorb 12 million passengers annually by the time 2033 rolls around.

Its most distinctive feature is its roof, comprised of 127 vaults topped with heat-reflective metal that will absorb and expel the desert’s extreme temperature fluctuations. Writer Rodolphe el Khoury noted in Azure‘s June issue that the canopy is also intended to resemble the clustered vaults commonly found in Islamic architecture. “Foster + Partners has taken the traditional canopy further,” he wrote, “and projected the pendentive vaults into the 21st century … with an environmental agenda.” 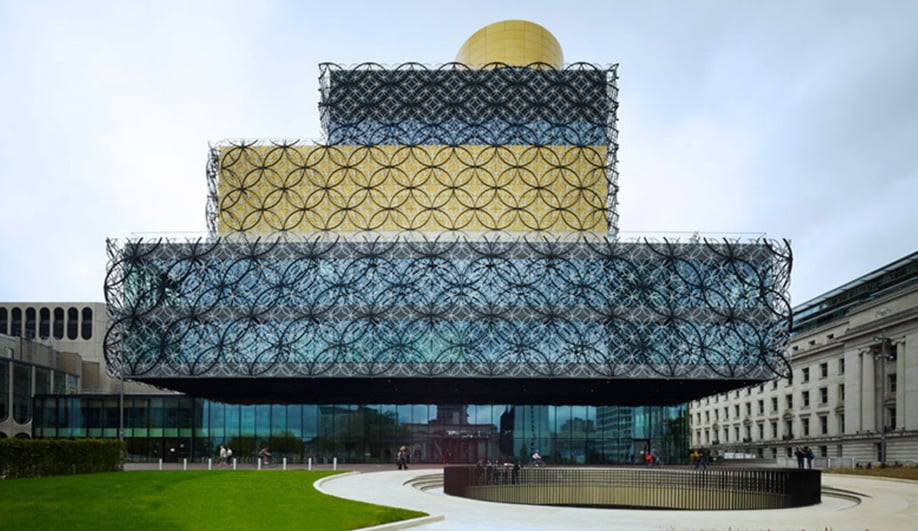 10 Library of Birmingham, in England, by Mecanoo

U.K. critics have not been kind to the new library that opened in Birmingham in August. The lacey metal-ring motif that covers its stacked volumes has been deemed (by Rowan Moore of The Observer) as “a bit Vegas,” with its emphasis on gold and glitz a tragic symptom of the Bilbao Effect, where a building’s design overrides it functional purpose.

The project, designed by Dutch studio Mecanoo, makes our list, though, for being a rare example of a civic building that doesn’t look like one. Inside, escalators ascend through a massive rotunda lined with black-hued bookshelves, and lead to an oval room at the top that houses the Shakespeare Memorial Room, dedicated to the library’s extensive collection of works by The Bard. Plant-filled terraces cover two of the rooftops, creating spaces for visitors to read and study outside, and a sunken amphitheatre is an invitation for impromptu street performances and events.

Shopping malls, hotels and entertainment venues usually get the green light for this kind of architectural swagger. Mecanoo’s library is located in the city’s main palazzo, which means it is now a focal point of the downtown core. When was the last time a library was given such a place of honour?