5 Brilliant Proposals for Toronto’s New Ferry Terminal
The teams competing to redesign Toronto's Jack Layton Ferry Terminal - featuring West 8, Will Alsop, Diller Scofidio+Renfro and nARCHITECTS - have unveiled their concepts. One thing's for sure: the ferry dock will be reborn as an architectural showstopper. 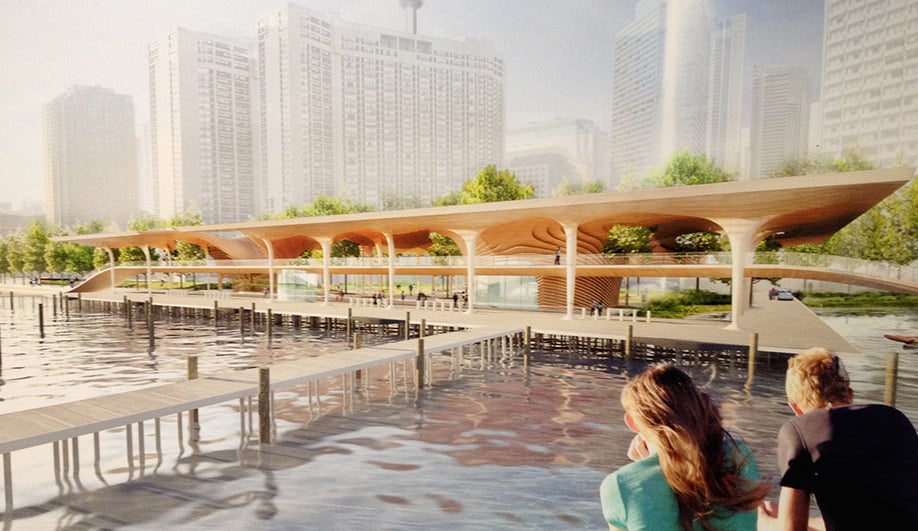 At 800 hectares and stretching for kilometres, Toronto’s waterfront revitalization project is the largest of its kind in the world. At its epicentre (the foot of Bay Street) is the Jack Layton Ferry Terminal, the main docks that connect the city to Toronto Island, a car-free parkland that attracts 1.3 million visitors annually.

While the ferry terminal is one of the most used parcels of land at the shoreline, it looks like a military zone where passengers line up in a barracked waiting area with very few places to sit and relax. That’s about to change. For a competition hosted by Waterfront Toronto, five international teams unveiled schemes last night at City Hall that reinterpret the terminal and surrounding area into new parks, swimming pools, promenades, skating rinks and more.

(For the full story on Toronto’s waterfront, stay tuned for Azure’s May issue, which celebrates the magazine’s 30th anniversary and shines a spotlight on Toronto. Follow us on Twitter, Facebook, Pinterest and Instagram with the hashtag #Azure30, for more on the 30th anniversary of Azure.) 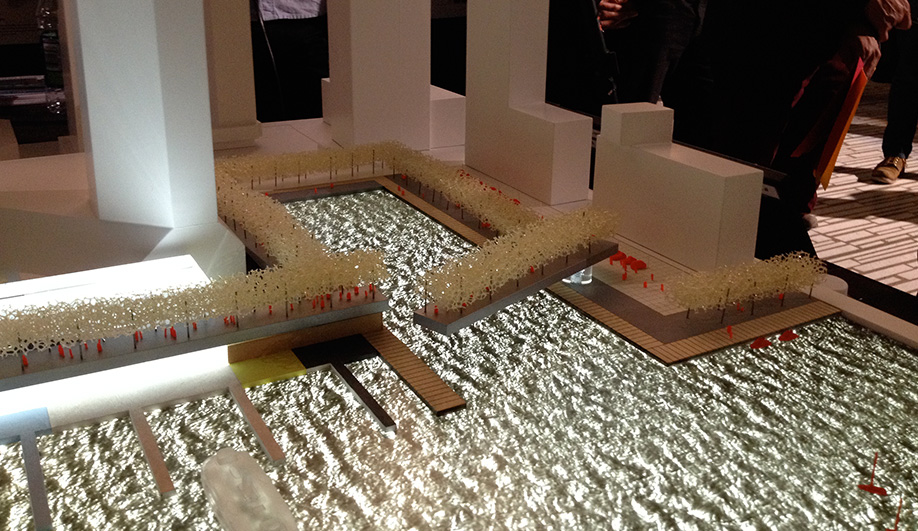 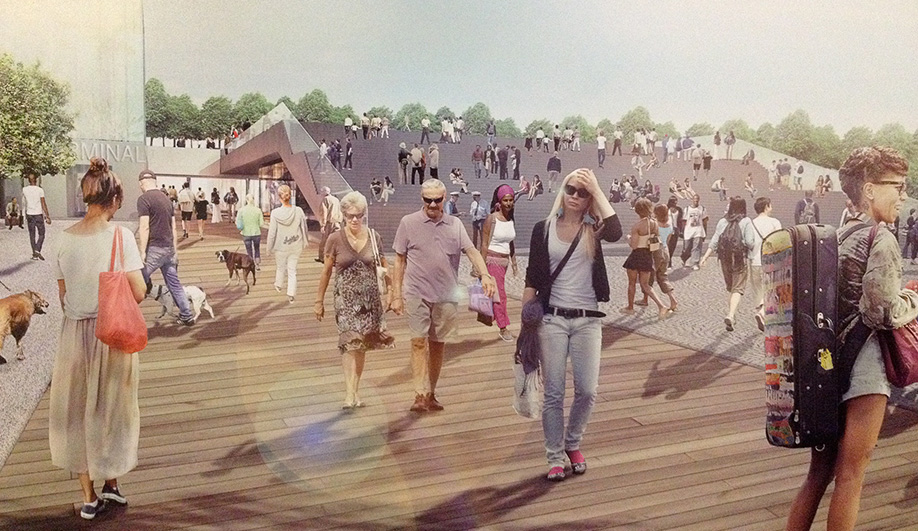 1 Clement Blanchet Architecture (Paris) + Batlle i Roig (Barcelona) + RVTR (Toronto and Ann Arbor) + Scott Torrance Landscape Architect Inc. (Toronto)
This scheme zeroes in on the lakeshore’s lack of topographical variety, dominated by residential towers. It introduces various landscapes for all types of activities: a pool for sun seekers (which becomes a skating rink in winter); a jungle-gym playground for kids and families; and a small forest of native trees that provides picnic areas and shelter from the weather. The terminal itself is a straight-forward elongated box accessed by a wide set of stairs. A raised promenade running along Queens Quay (the lakeshore’s main artery) is the plan’s biggest attraction, providing an above-the-street walkway with views of the lake and islands. Where the ferry boats dock, the walkway would twist open like a gateway, to welcome the vessels and give passengers a sense of arrival and departure with each trip. 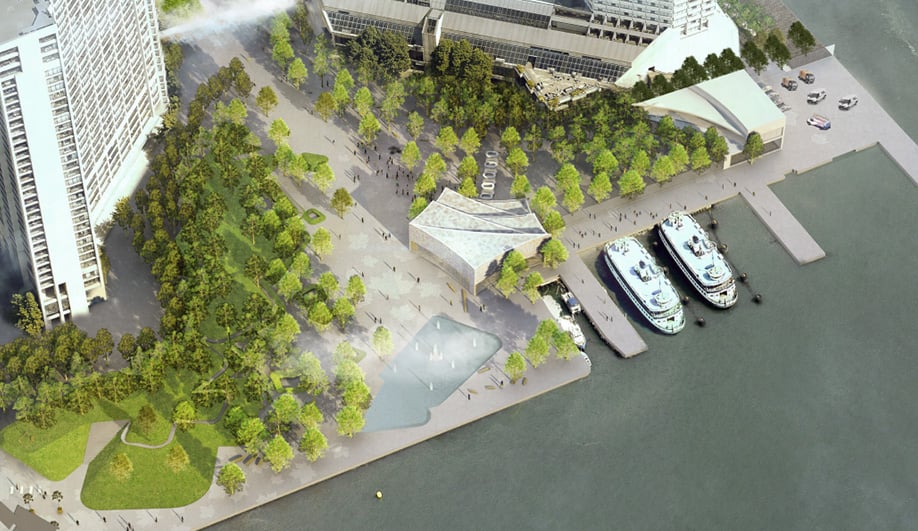 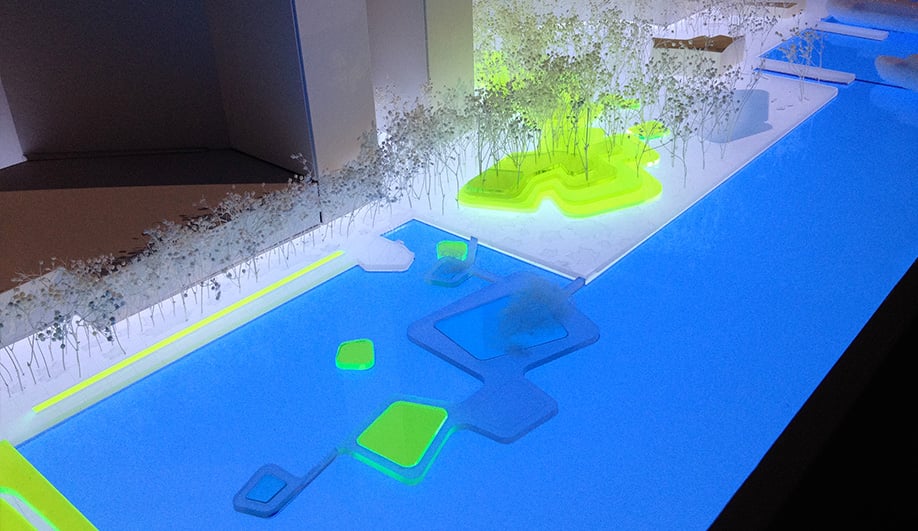 2 Stoss Landscape Urbanism (Boston), nARCHITECTS (Toronto) and ZAS Architects (Toronto)
Chris Reed, principal of Stoss Landscape Urbanism, presented the most imaginative proposal: a vaporous cloud that hangs in the air near the entrance of the terminal and provides a powerful sense of atmosphere in every season. The mist would partially obscure an existing pedestrian bridge (a rather dull bit of architecture that the other teams have proposed taking out), and create a dramatic sense of arrival, reminding visitors they are at the water’s edge. The plan also includes a swimming pool embedded within the harbour and iceberg-shaped hot tub islands that can be rented out and floated around the harbour, presumably in the winter months as well as during the summer. 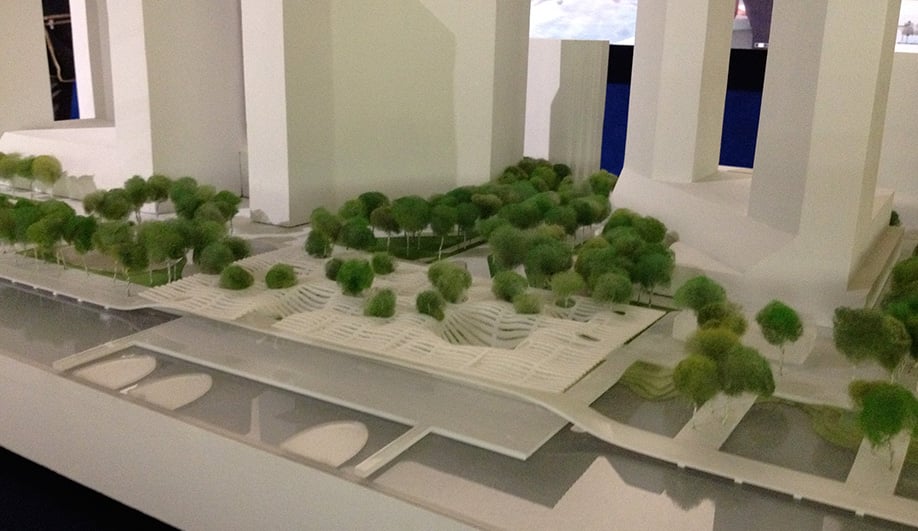 3 Diller Scofidio+Renfro (New York), architectsAlliance (Toronto), Hood Design (San Francisco)
This proposal is a standout. The new terminal would take the shape of a “civic canopy” made of wood ribs that undulate like a sea shell. Oval openings in the canopy allow the trees inside to burst through, and the roof dips to the ground at one point, creating a small amphitheatre. The canopy’s brise-soliel effect provides a public arena for everyone to enjoy. Ferry ticket holders would have boarding alerts sent to their phones – a feature that would eliminate line ups at the ticket stand and waiting area. During the winter months, the terminal doubles as a winter food market, while a lakeshore promenade that rises above the dock allows visitors to watch the boats as they come and go. East of the terminal is parkland, playgrounds and a beachfront with a floating wetland area embedded a few metres from shore. 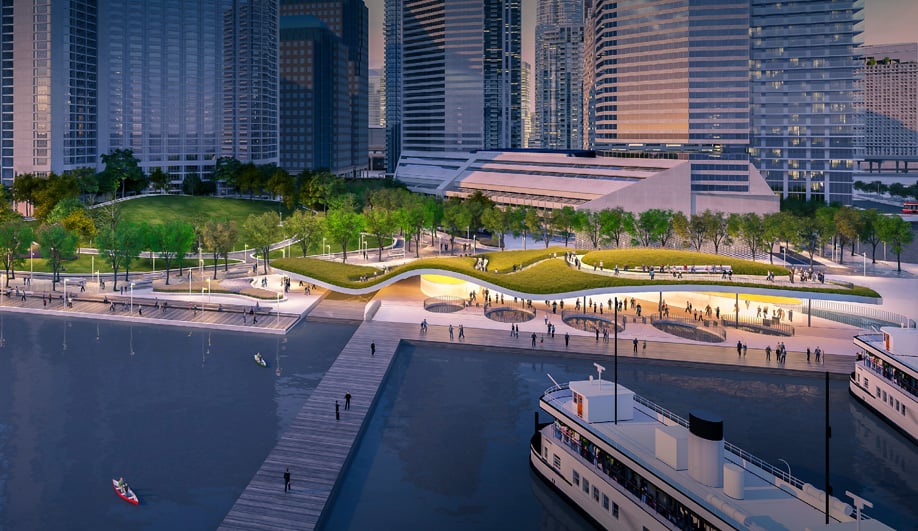 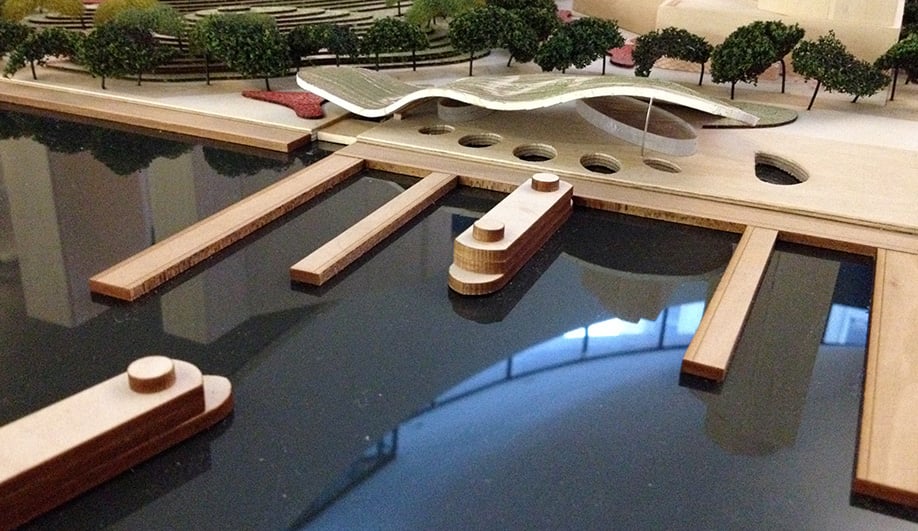 4 KPMB Architects (Toronto), West 8 (Rotterdam), Greenberg Consultants (Toronto)
This proposal imagines the tip of Bay Street dominated by greenery. The terminal’s curvaceous rooftop would double as an accessible elevated park area with a meandering path. Its wooden form covers two oval pavilions, one containing washroom amenities, the other larger one a waiting area with eating and drinking facilities, an improved ticket hall, and ferry access points. The embarkation gates, located between a series of oval openings in the deck, allow visitors to see down into the aquatic habitat below. 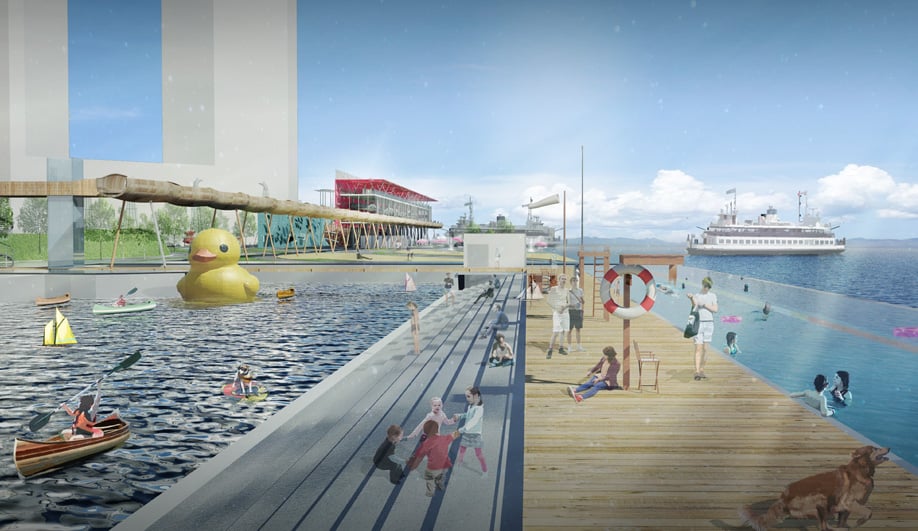 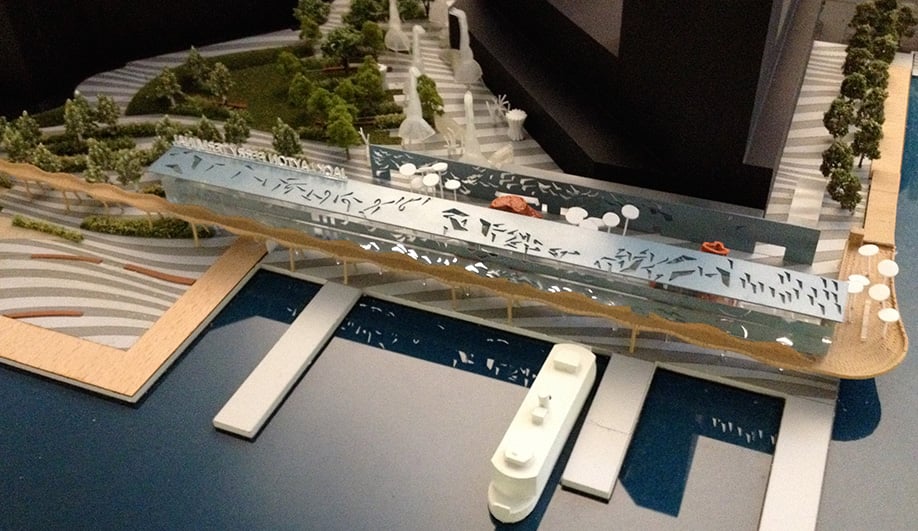 5 Quadrangle Architects (Toronto), aLLDesign (London), Janet Rosenberg & Studio (Toronto)
This is the most colourful and playful of the five proposals, which is not that surprising, given that Will Alsop is on the team. As with the other proposals, attracting people to spend their day at the lakeside is as important as getting passengers onto the ferries. The enlongated terminal is reached through an open plaza defined by greenery and walkways that form wave-like patterns. It is also accessible via an elevated walkway on stilts that leads strollers to the terminal and an outdoor swimming pool. The environs are filled with quirky forms, including bulbous pavilions and kiosks (called street creatures), sand dunes and a boardwalk promenade.

Full details on each proposal are available here.