5 Great Ideas for Fortifying New York and New Jersey
Barrier reefs that restore fish habitats, terraced waterfronts sporting bike paths - these flood-mitigating ideas, which teams led by BIG, OMA, West 8 and more have dreamed up for the Rebuild by Design competition, also give a lot back to the people. 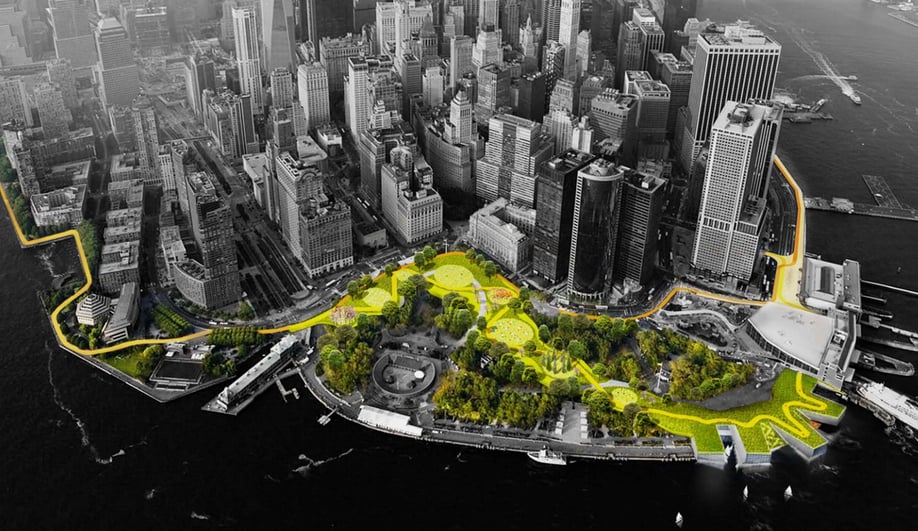 Earlier this month, 10 finalist teams unveiled proposals for the Sandy-affected region as part of the Rebuild by Design initiative. Launched last summer, the competition is part of the Hurricane Sandy Rebuilding Task Force, which connects the government with design teams, educational institutions and the local community to develop new concepts to strengthen waterfront communities.

While winners will be announced later this spring, all of the finalists ought to be commended for presenting comprehensive and imaginative proposals for making the waterfront more resilient while transforming it into a fun-filled and ecologically diverse destination.

Here are five of our favourite ideas: 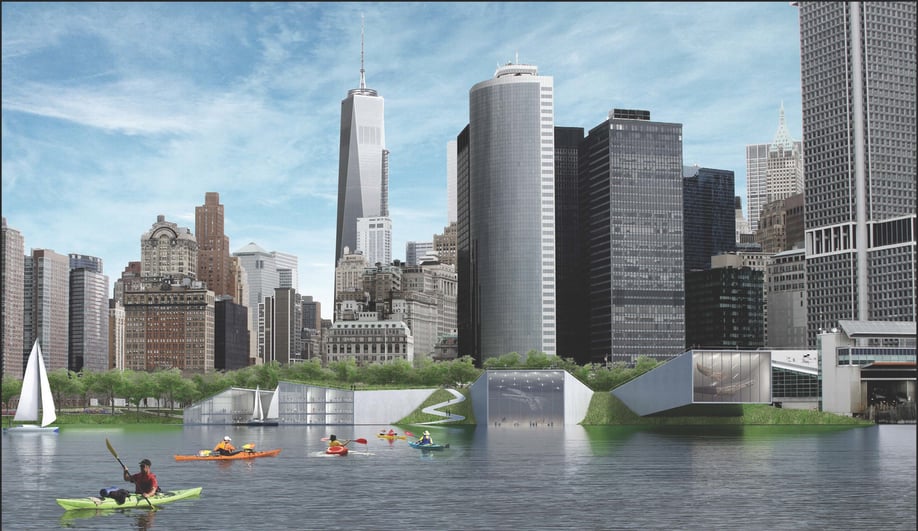 “A string of pearls of social and environmental amenities tailored to their specific neighbourhoods, that also happens to shield their various communities from flooding.” That’s how BIG, which leads this team concept, describes its BIG U program, 10 miles of community-developed green space (from 57th Street down to the Battery and back up to East 42nd Street) that can be deployed as a flood barrier. Eschewing a simple wall around the area for a more interactive, community-oriented flood protection zone, BIG separated the perimeter into three sections that combine features like tree-lined boardwalks, bike paths and even a maritime museum with deployable walls, berms and natural buffers to veer storm water away from the city core. 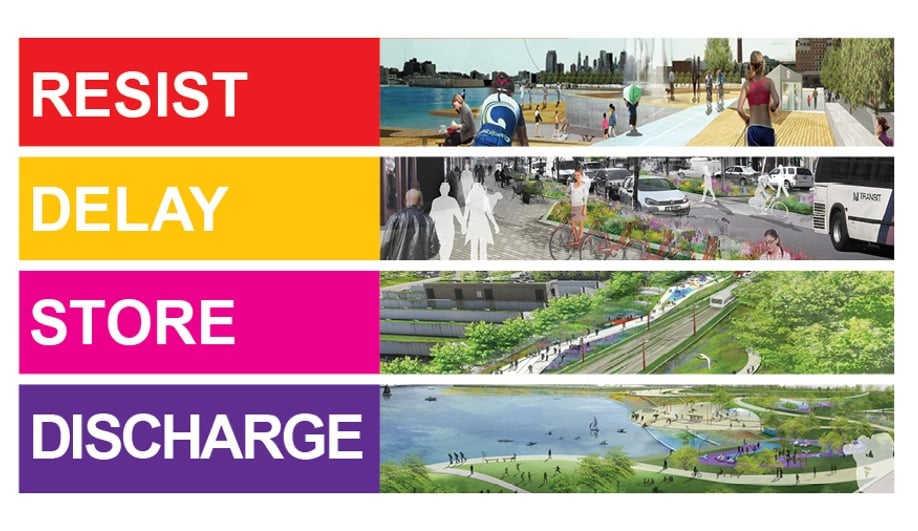 2 Transforming Hoboken into a water-mitigating machine

OMA’s four-pronged plan is called “Resist, Delay, Store, Discharge.” This ecosystem of infrastructure would transform Hoboken, New Jersey, which the architects note has a surface that is 94 per cent impermeable while being surrounded by unprotected waterfront, into a self-sufficient city. Along the unprotected edge, the concept calls for terraced edges, bulk ways and deployable flood walls. To delay flooding and storm surge damage, this network of hard infrastructure would be complemented by soft landscaping: parks along the terraced edges, as well as green roofs and bioswales. A series of cisterns, bio-retention basins and constructed wetlands would retain excess storm water, which would then be discharged through a network of storm water pumps and storm drains. 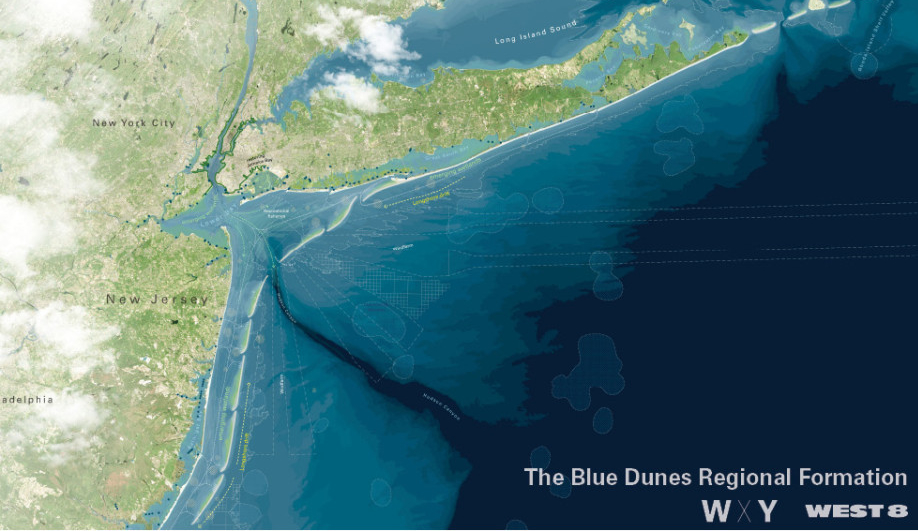 By designing with “coastal processes in mind,” WXY/West 8 might just have the most dramatic plan: an offshore chain of barrier islands – The Blue Dunes – that would work in tandem with nature, not against it, to protect the coastal region from storm surges. Bolstered by a proposed Blue Dunes Research Initiative, the scheme could also incorporate offshore wind farms and other renewable energy projects. 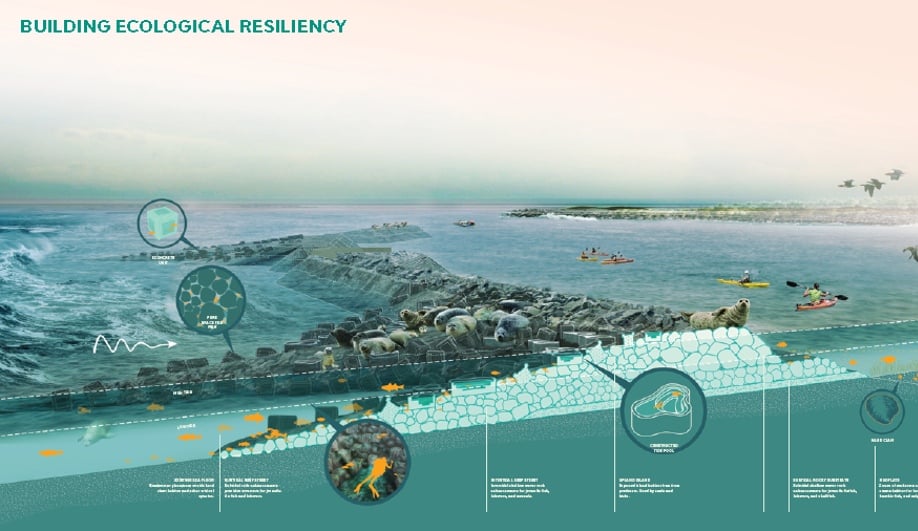 While WXY/West 8 calls for offshore sand dunes, this comprehensive concept by SCAPE/Landscape Architecture proposes “a necklace of breakwaters,” which would protect Staten Island against wave damage, flooding and erosion while providing the opportunity to nurture individual fish habitats. The team describes the goal as reducing risk, while reviving ecologies – the latter resulting in a “reef street,” or pockets of habitat for finfish, shellfish and lobster. Inspiring the community along Staten Island’s south shore to educate themselves about their water systems, the plan would foster a new generation of harbour stewards. 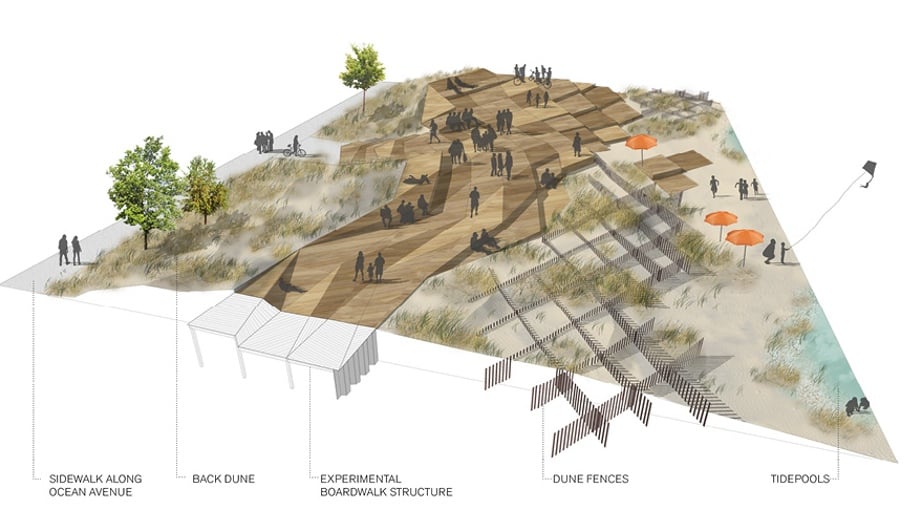 For better or worse, Jersey Shore is already known as a beach destination. But Sasaki/Rutgers/Arup’s plan calls for turning this enclave – which happens to be richly variegated – into an eco-tourism hotspot. Focusing on three areas, the team sees multiple opportunities for reinvigorating the shore. In Asbury Park, they propose a hybrid boardwalk-dune infrastructure that could integrate micro-moments, like seating, steps, and intimate edges. By reclaiming Inland Bay’s underutilized water spaces, they can mix recreation opportunities with water management and habitat migration programming. And they plan to bolster the barrier islands as transportation nodes that also accommodate eco-lodges, cabins and campsites.