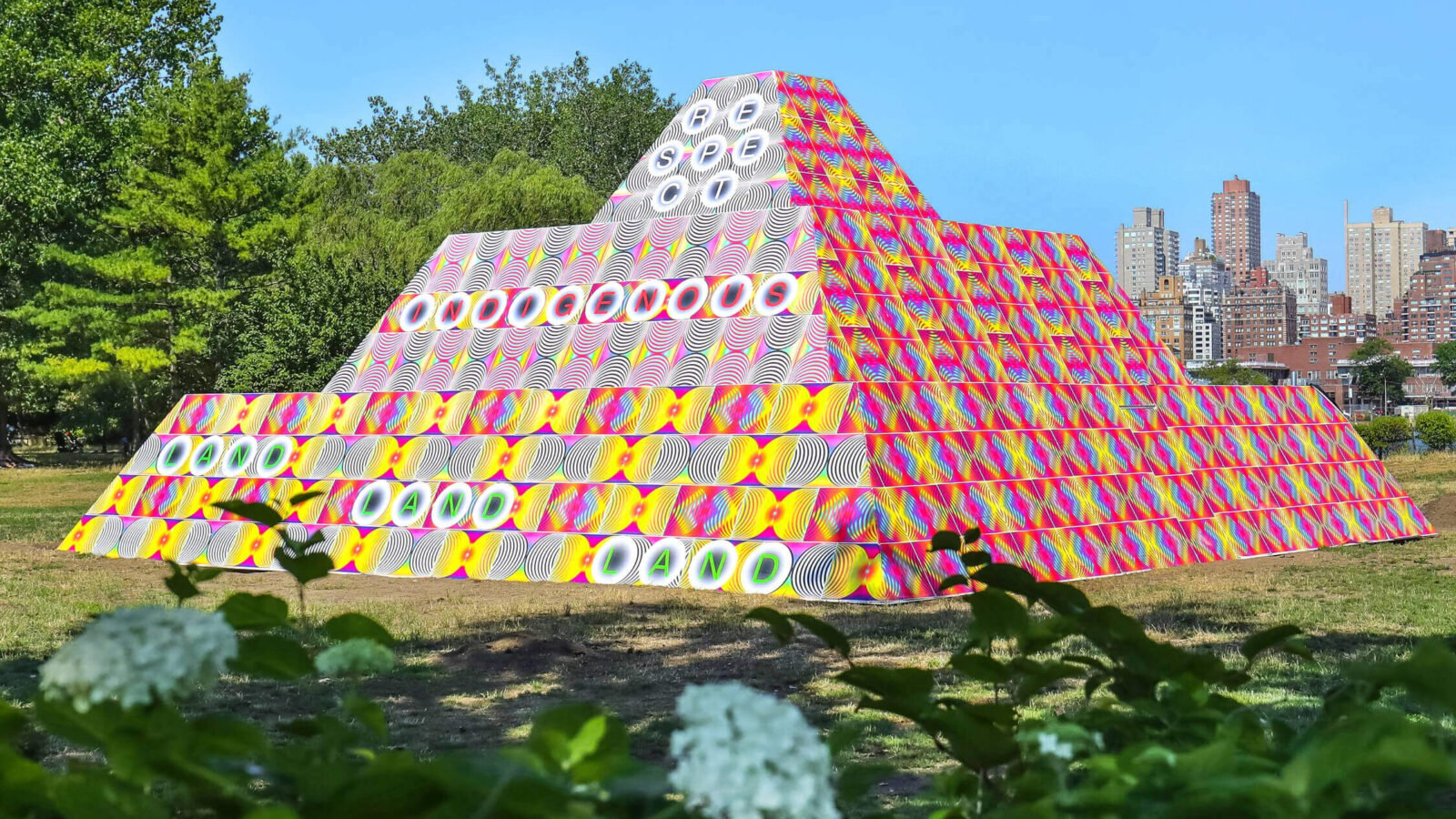 From Prague to Puerto Escondido, these striking structures make the most the season’s dog days.

For Azure‘s editorial team, one of our annual summer highlights is the plethora of bold, evocative and playful al fresco pavilions that pop up across the world during the course of the season. In 2020, these structures have taken on new meaning as the outdoors remains one of the few (relatively) safe places to congregate amidst the ongoing pandemic. (The open air also provides a much-needed respite from months spent confined to our domestic environs). As we soak up the last dregs of the dog days of summer, here are our top picks for five striking, and socially distant, public interventions: 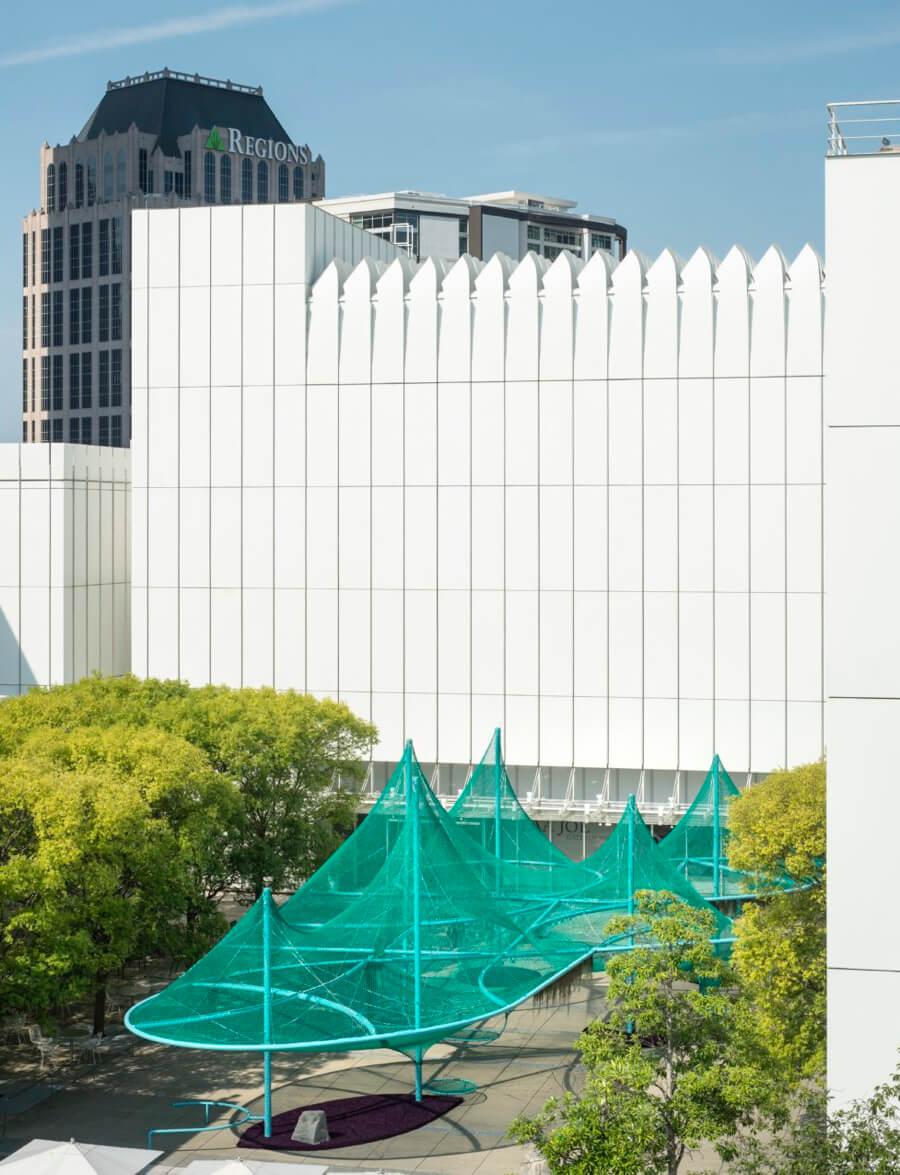 SO-IL founders Florian Idenburg and Jing Liu are masters of ethereality, bringing to life both ephemeral installations and permanent buildings that appear weightless. A site-specific work for the High Museum of Art in Atlanta, Georgia, Murmuration is inspired by the metropolis’ reputation as a “city in a forest” and by the High’s proximity to nearby Piedmont Park. 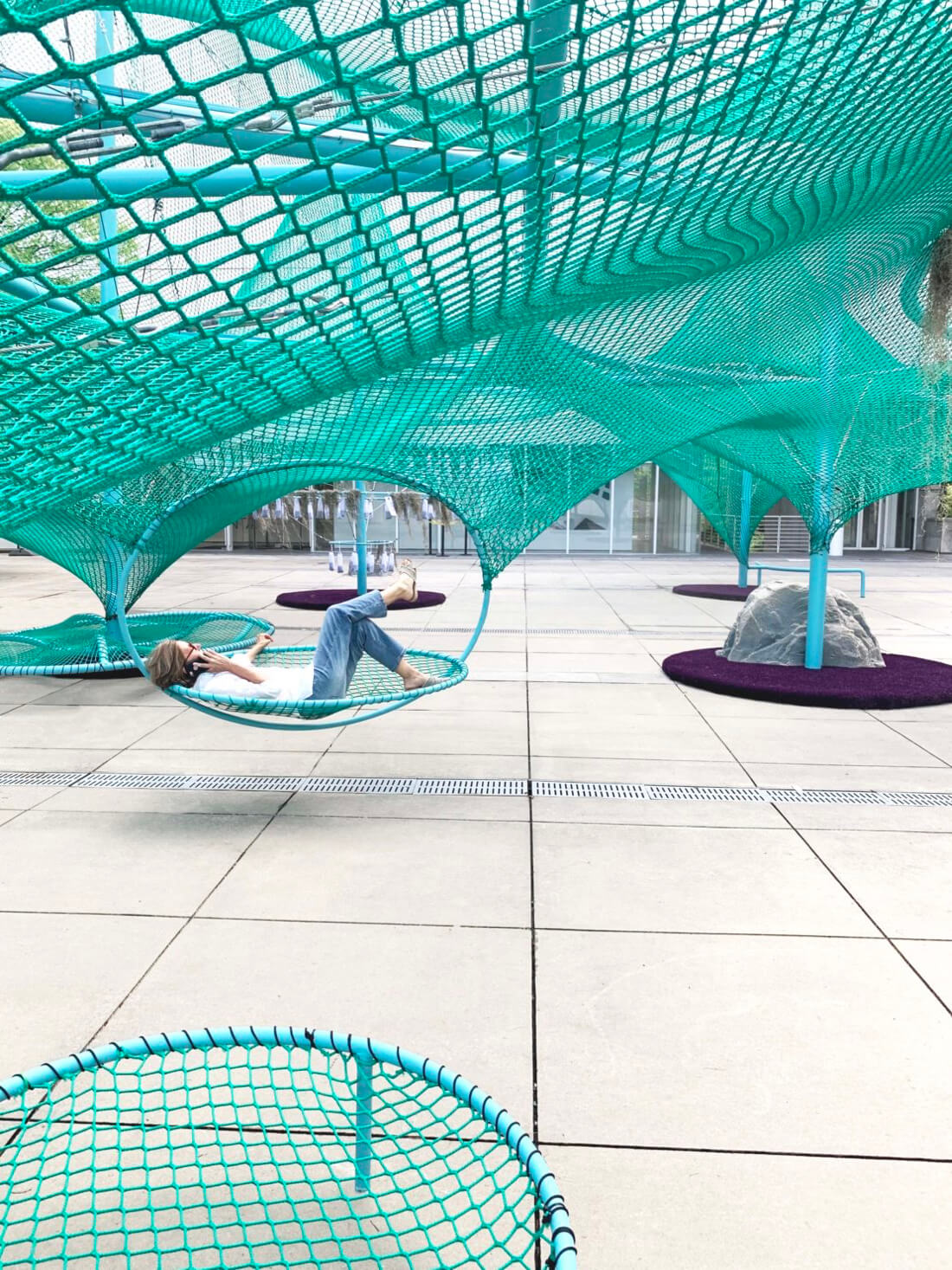 The 218-square-metre mesh canopy — actual agricultural netting — is suspended from a steel framework to evoke a simplified tree canopy. It’s completed with bird feeders and perches, allowing visitors to ponder both the natural environment and this simulacrum, at a time when public space is being reappraised as the ultimate solace from our cramped quarantine quarters.

In France, wicker baskets are typically used to haul laundry, produce or fish, so perhaps it took outsiders — specifically architects Didzis Jaunzems and Ksenia Sapega of the Latvia-based studio DJA — to see their potential as monumental garden art. The firm’s strikingly sculptural Wicker Pavilion, comprised of 262 cone-shaped baskets affixed to a curving timber shell made of individual pine triangles, sits in the heart of Jardins de I’Europe in the southeastern French town of Annecy, some 42 kilometres due south of Geneva, Switzerland. It was erected for Annecy Paysages, the burgeoning landscape architecture festival, which runs this year until September 27. 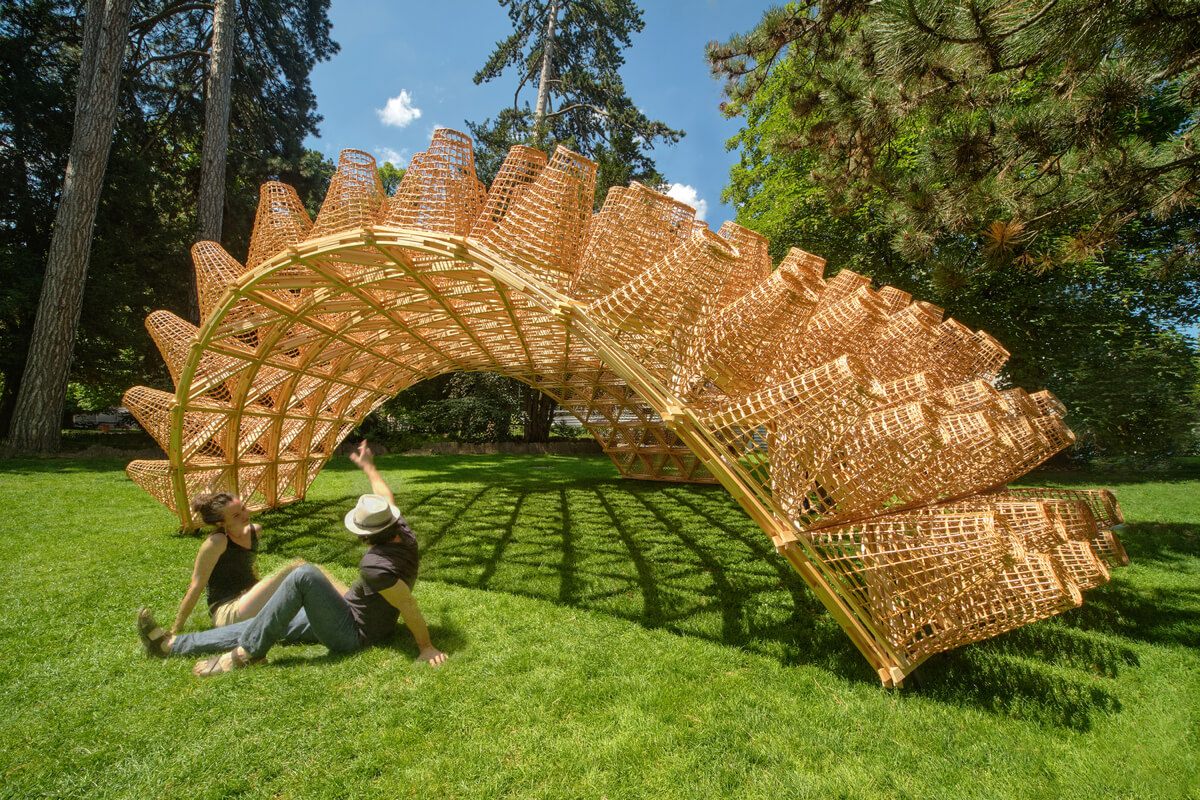 Part shade provider and part belvedere, “the pavilion offers beautiful views to the surrounding nature, thus creating a communion between the sheltered space and the exterior,” says DJA of its construct, which variously evokes an Asian temple, a lumbering dinosaur or a giant chrysanthemum. “Filtered daylight through the pavilion inspires eyes and mind to travel.” In the era of COVID-19, this ability to inspire such reverie, in those lucky enough to be able to idle under its filigreed shade, can’t be underestimated. For the rest of us, looking at pictures of the structure, DJA’s second for the festival, will have to do. And fortunately it’s an eyeful. 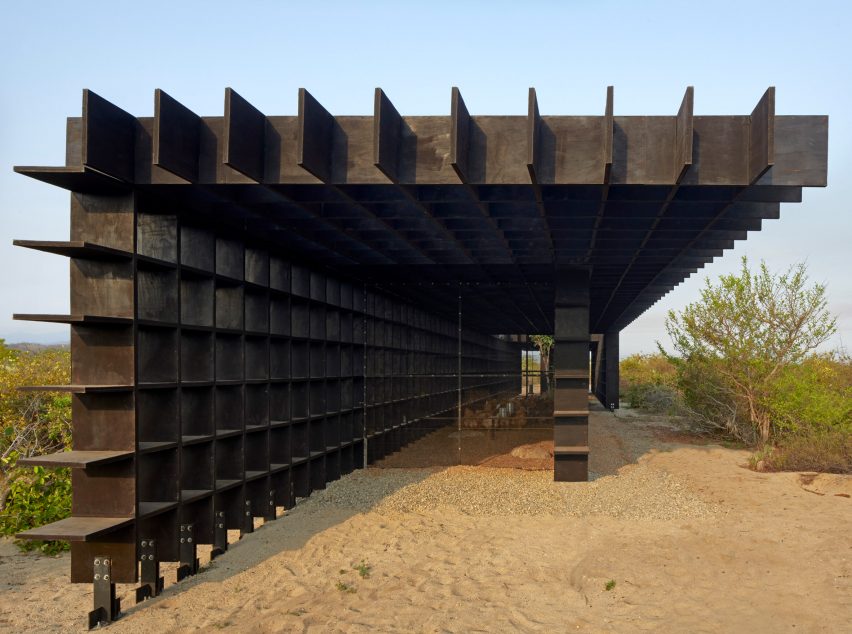 It’s co-living — for chickens. At the Casa Wabi artist retreat, Kengo Kuma and Associates took inspiration from communal living facilities to create an aviary like no other. A simple lattice pattern of interlocking plywood panels was used to create a structure that envelopes a pleasantly shaded and naturally ventilated coop. A central feeding room and gathering space — a communal coop, if you will — is surrounded by more private areas, with the pixelated walls opening up spaces for individual birds to rest. 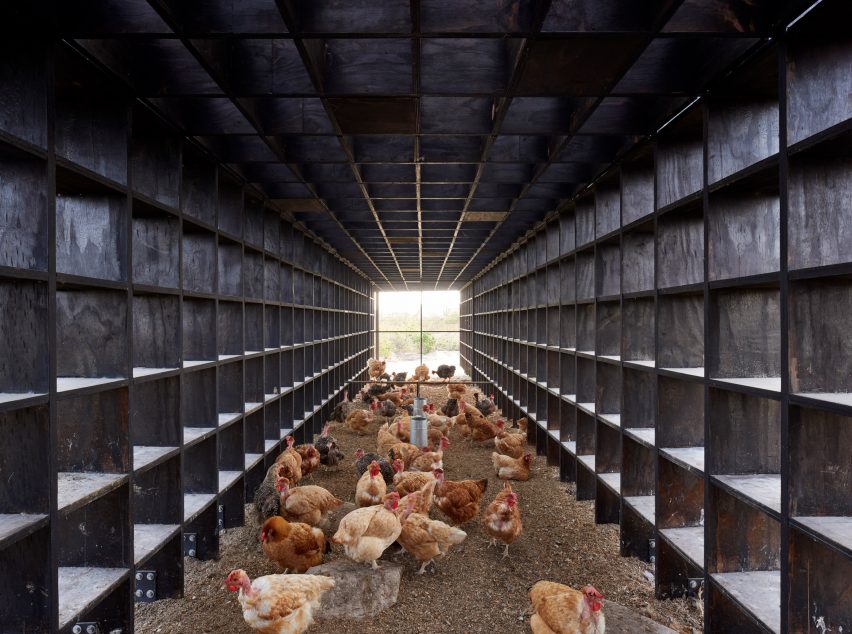 While the design is elegantly pared down, the space is carefully programmed to incorporate a workshop for egg collection and a veterinary space where sick birds are quarantined. Kengo Kuma’s design is one of five pavilions recently built to support the Mexican retreat’s day-to-day needs and operations. From a ceramics studio designed by Álvaro Siza to an open-air composting space by Gabinete de Arquitectura, the installations bring a dose of the sublime to everything from pottery to poultry.

4
Because Once You Enter My House, It Becomes Our House by Jeffrey Gibson

As part of Socrates Sculpture Park‘s initial phase of their 2020 program, titled “MONUMENTS NOW” and running until March of next year, the platform tapped a cohort of celebrated local artists to helm unique interventions within their sprawling terrain in Queens, New York. Among them was Jeffrey Gibson, whose stepped ziggurat-like structure is emblazoned with the Mississippi Choctaw-Cherokee artist’s signature graphics. Drawing on the rich lineage of activist imagery as well as Indigenous design traditions (notably from Mesoamerica), included amidst the interconnected psychedelic surfaces are bold neon letters that prominently spell out “Respect Indigenous Land.”

The pavilion is a reminder of the deep history of its urban locale and those who have long cared for it, with Gibson also curating a number of onsite activations by Indigenous performers (recorded and available to audiences online) to further mediate on these connections. Because, as the title suggests, it’s not only environmental stewardship that requires such group efforts, but the shaping of an entire “vision of the world that embraces complexities” and “collective identity,” according to the artist. It’s a step in the right direction. 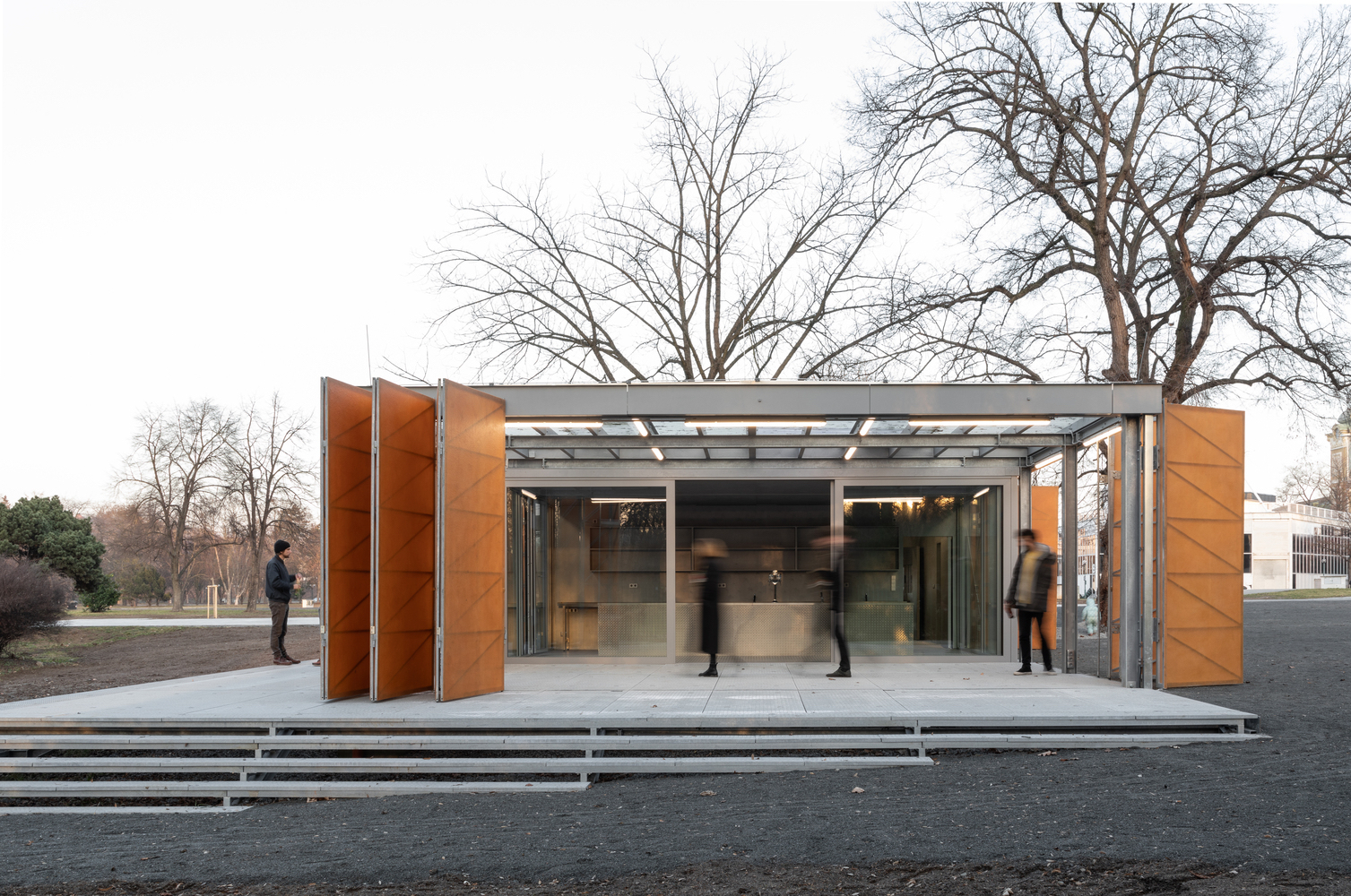 Serving as a conduit between the sprawling Stromovka park and garden and the recently reopened to the public Prague Exhibtion grounds, Summer Pavilion by Papundekl Architects is informed by functionalism, establishing a defined space for pedestrians to ceremoniously pass through, take their time exploring or simply meet and linger.

To minimize the impact on the landscape and root systems of the surrounding trees, the pavilion sits atop a low concrete platform and features a facade made from adjustable translucent fibreglass panel in an eye-catching amber colour; the softness of the semitransparent material is contrasted by steel-grey framework, which includes zigzagging elements that support the doors and provide a strikingly graphic relief. The modular structure is adjustable for usage, changes in weather and differing light conditions — opened wide, it invites passersby in, closed completely, it glows like a lantern on the landscape. 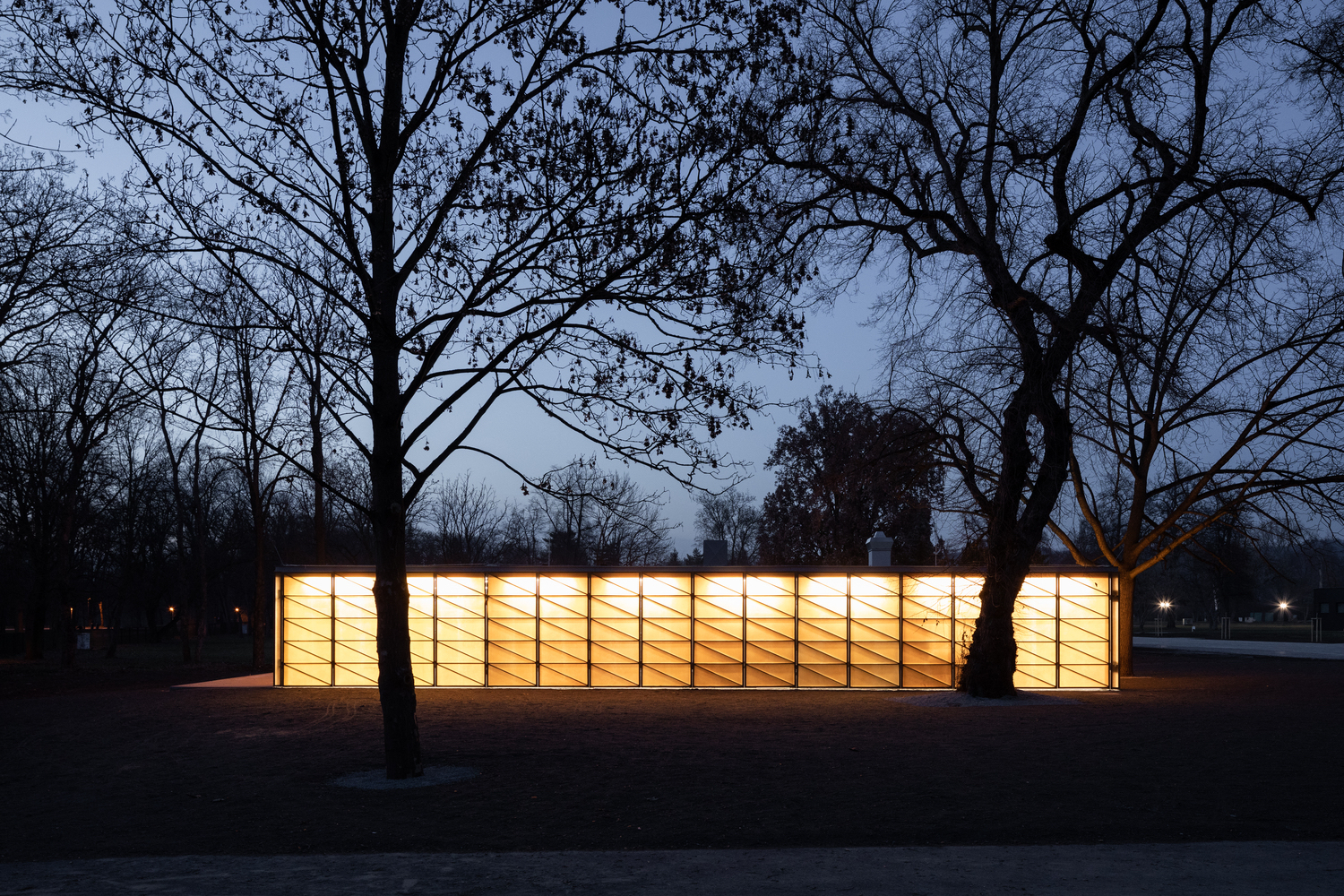 Inside, a squat glass-and-wood cube houses a refreshment stand, tap-room for local craft beers and public washrooms (plus staff facilities). It’s an intentionally minimal yet hardworking intervention that aims to unify two large public spaces into one and — all while providing moments of respite, refreshment and reflection.

From Prague to Puerto Escondido, these striking structures make the most the season’s dog days.