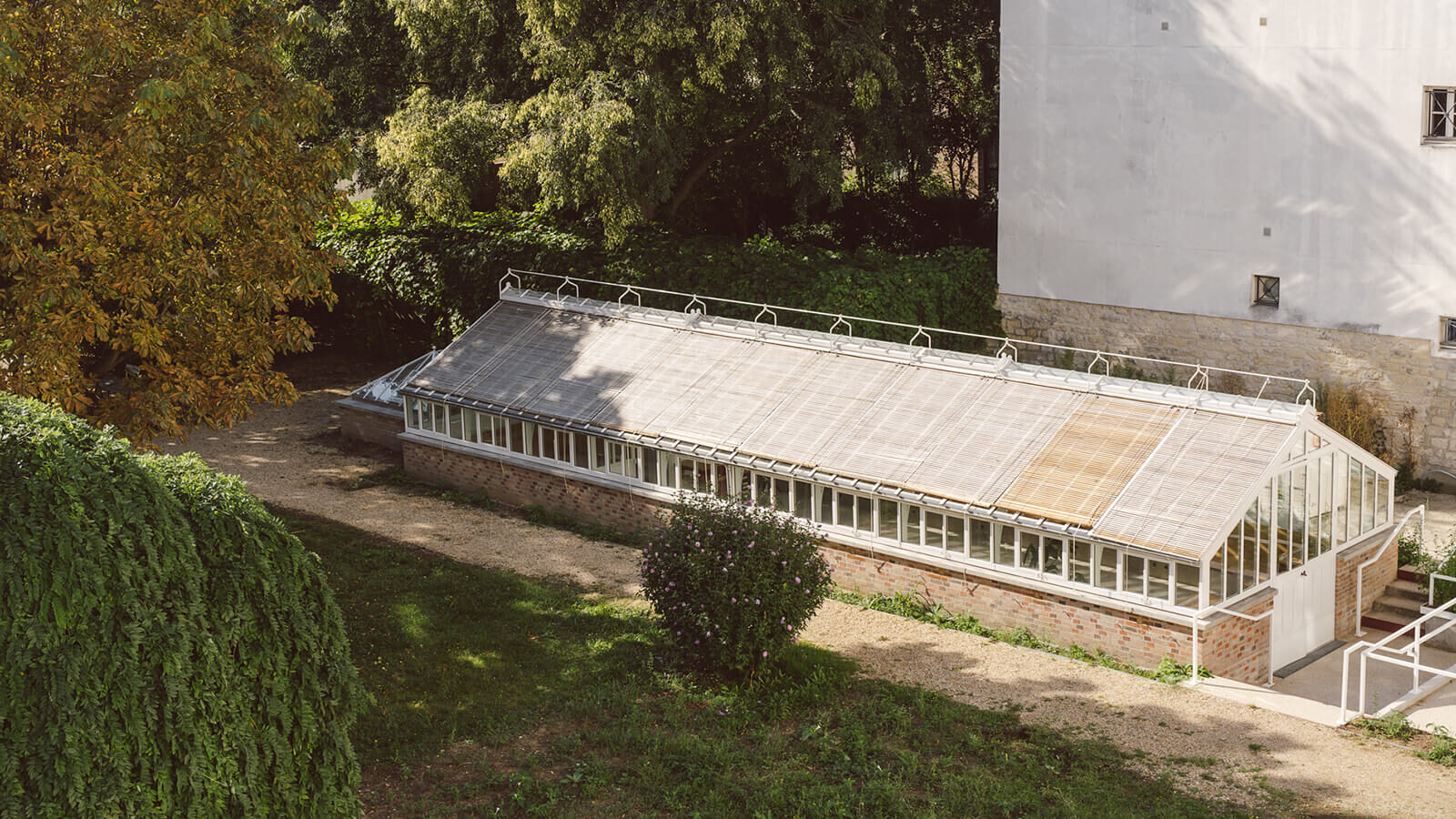 Paris’s 7th arrondissement is one of the oldest and most picturesque in the city. It’s the district of the Eiffel Tower and Musée d’Orsay, where ornate, frozen-in-time building facades provide the backdrop for postcard-perfect snapshots. It may be romantically, superlatively Parisian, but when it comes to more functional needs, its strict historical preservation laws can make life difficult. 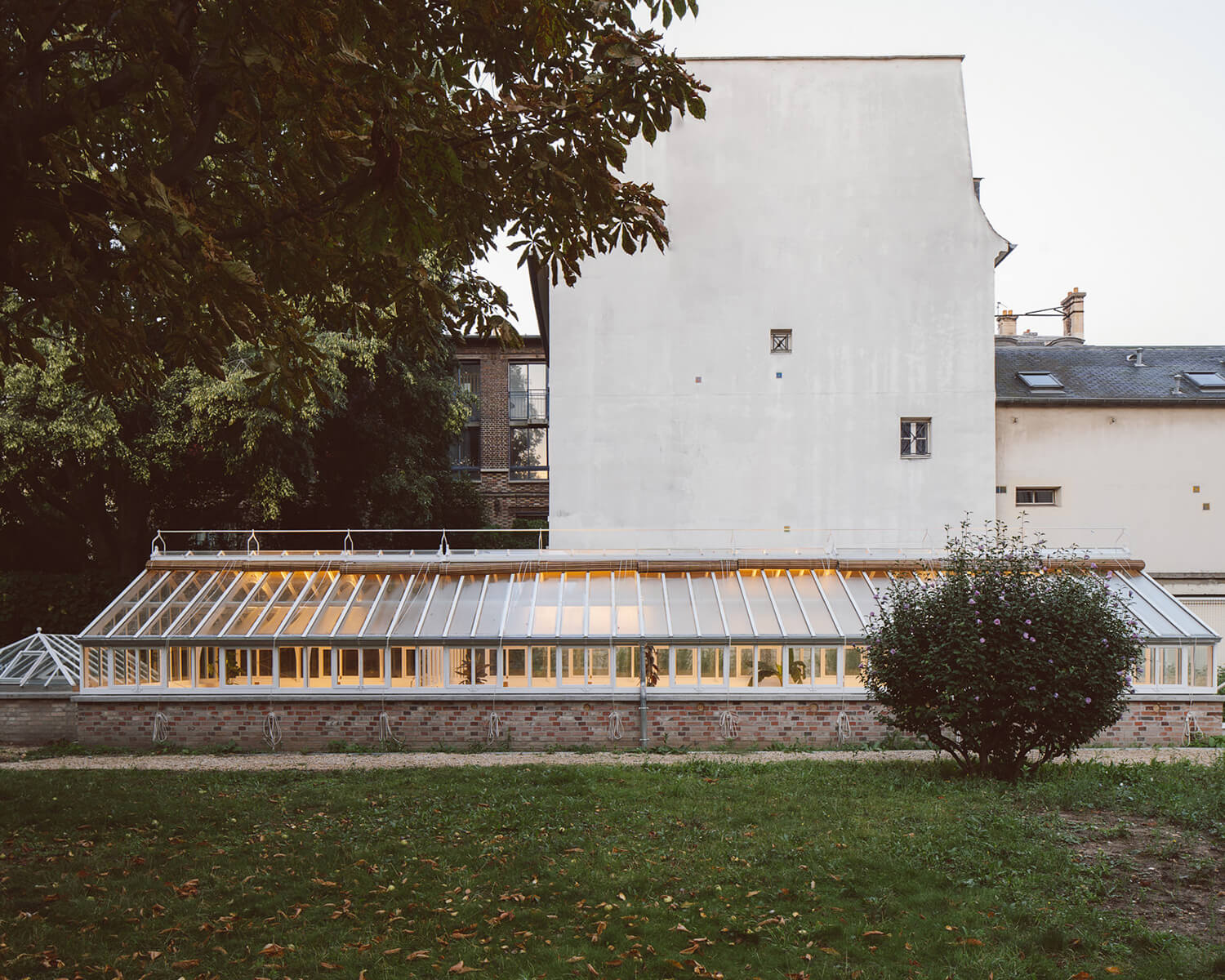 Forme Architecture + Urbanisme replaced all the glazing and the wooden envelope, maintaining the greenhouse’s original character while bringing it into the current century.

Those dictates have made development particularly complicated for the administration at Clinique Saint Jean de Dieu, a hospital that specializes in cancer treatment set within a sprawling private park along the southern edge of the district. They wanted to find some extra space to host activities for their long-term patients to find respite from their dreary hospital rooms, but due to strict zoning laws, expanding or altering the existing 18th-century building was impossible. The solution came in the form of a crumbling greenhouse on the property, originally built by resident monks in the 19th century to cultivate medicinal plants. 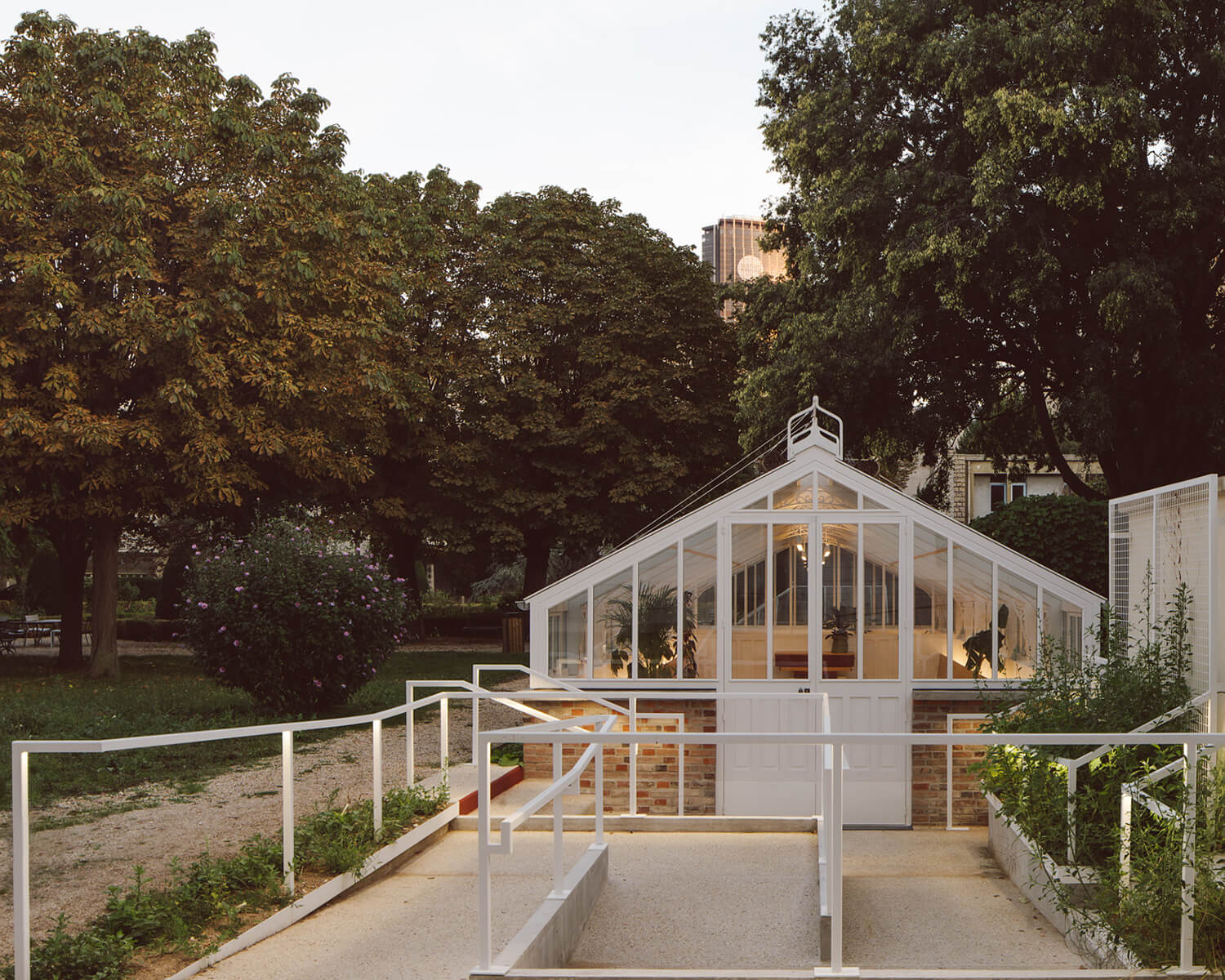 The clinic turned to Paris-based firm Forme Architecture + Urbanisme, founded by architects Robinson Neuville and Clément Maître, to breathe new life into the 100-square-metre space and take advantage of the surrounding greenery. “They were looking for a place where they could take the patients out of the hospital,” explains Neuville of their client’s hopes for the dilapidated building, which sits immersed within a cluster of trees. “To paint, do yoga, listen to music or even attend classes.” 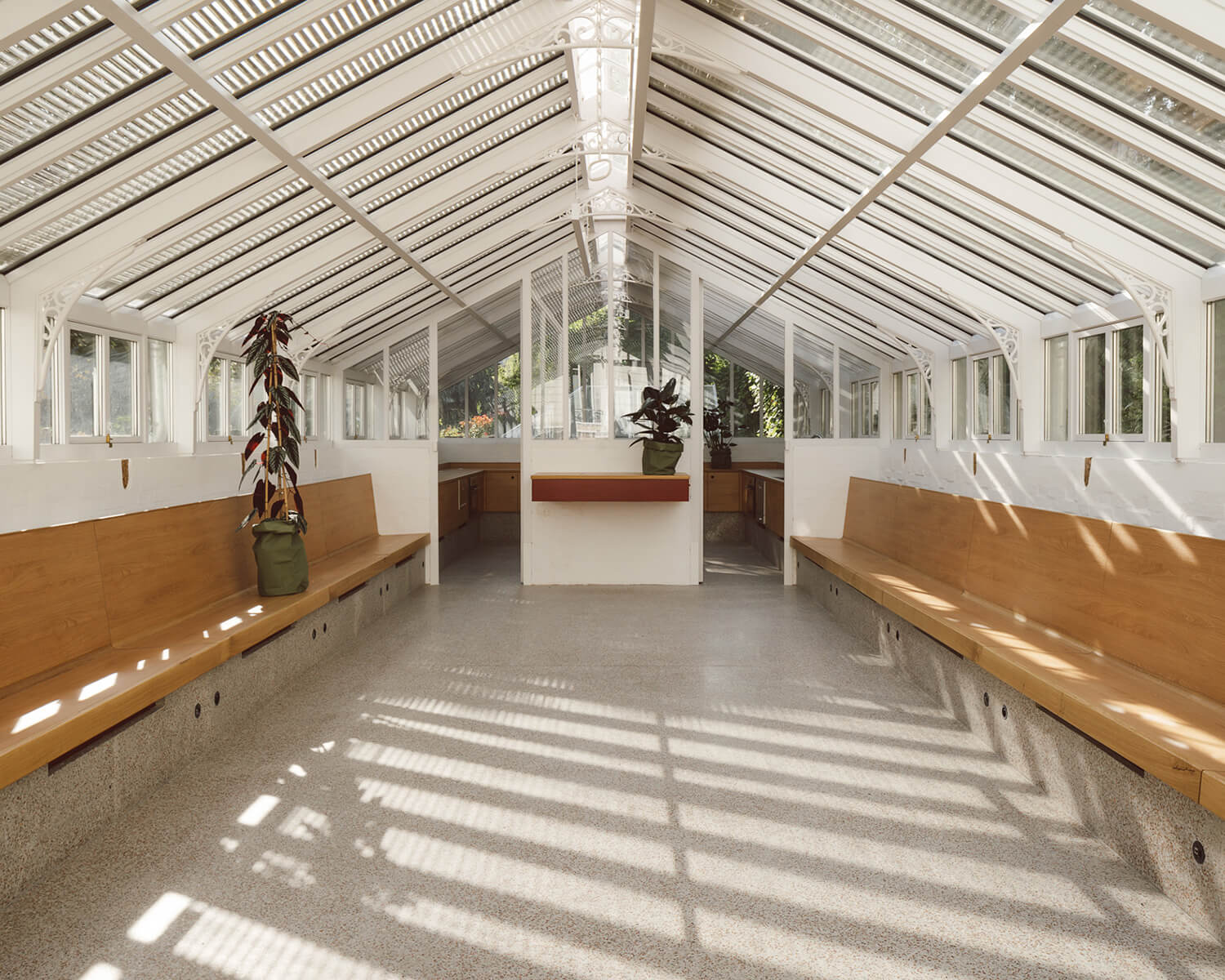 Unable to modify the listed building’s original architecture, they focused on making the interior liveable, which meant lowering the existing floor and replacing the glass and wooden envelope; cast-iron details were re-used, the brick foundation was partially rebuilt and some was crushed down and mixed with concrete to create a hard-wearing terrazzo floor. According to Neuville, the finishes employed throughout were required to hold up to both high traffic and medical-grade sterilization, meaning no porous materials like natural wood were allowed. They instead selected easy-to-wipe-down laminated timber for the built-in furniture in the kitchen, and for a simple multi-purpose bench that runs along either side and cleverly conceals technical elements. 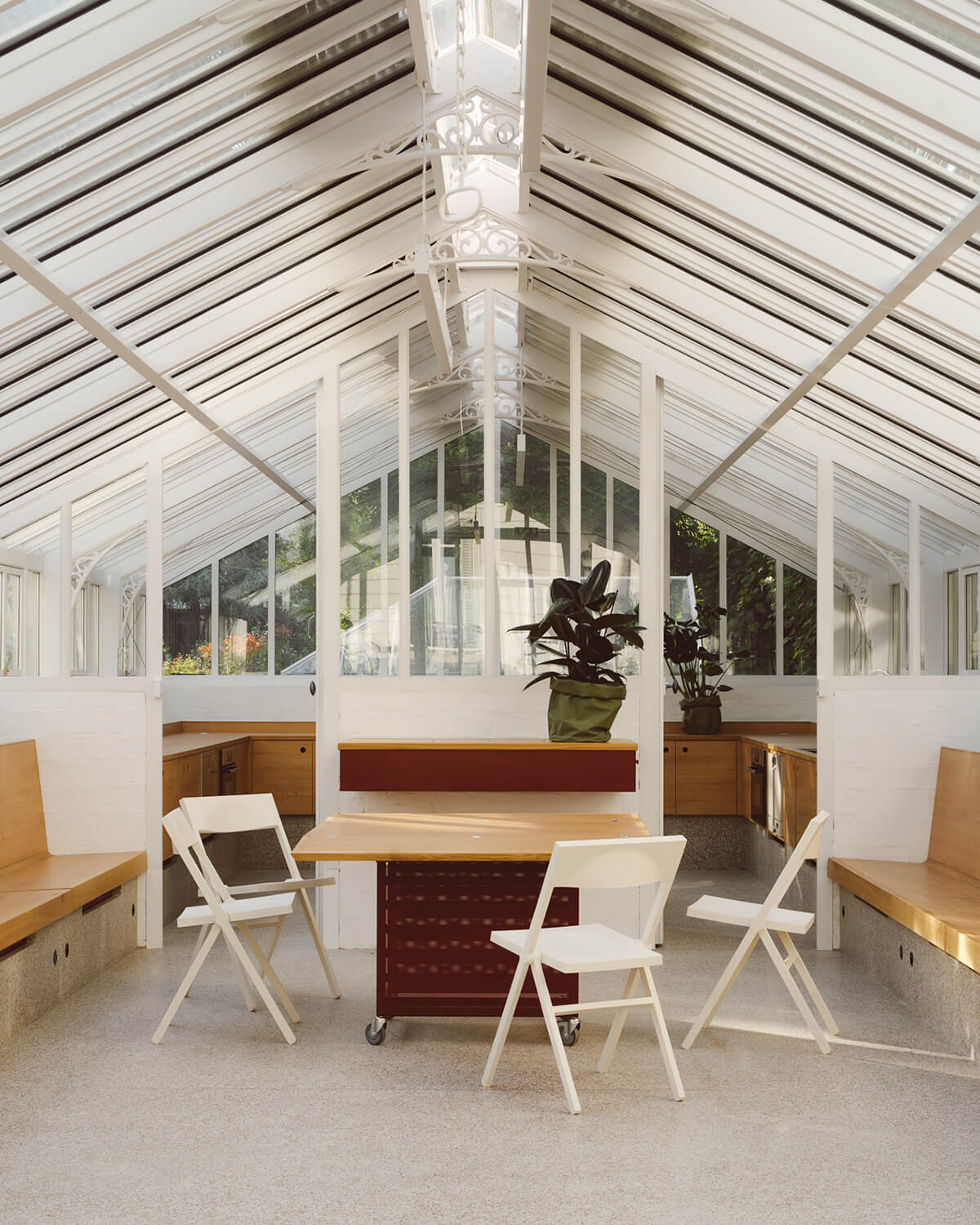 The bright interior is enhanced by built-in warm wood benches that span both sides, offering plenty of seating while keeping technical equipment accessible but out of sight.

The other major concern was regulating the temperature in a sustainable way. This meant adding adjustable sunshades and double-glazed windows and making use of adjustable vents at the apex of the roof and on the walls to encourage passive airflow in the hot summer months. 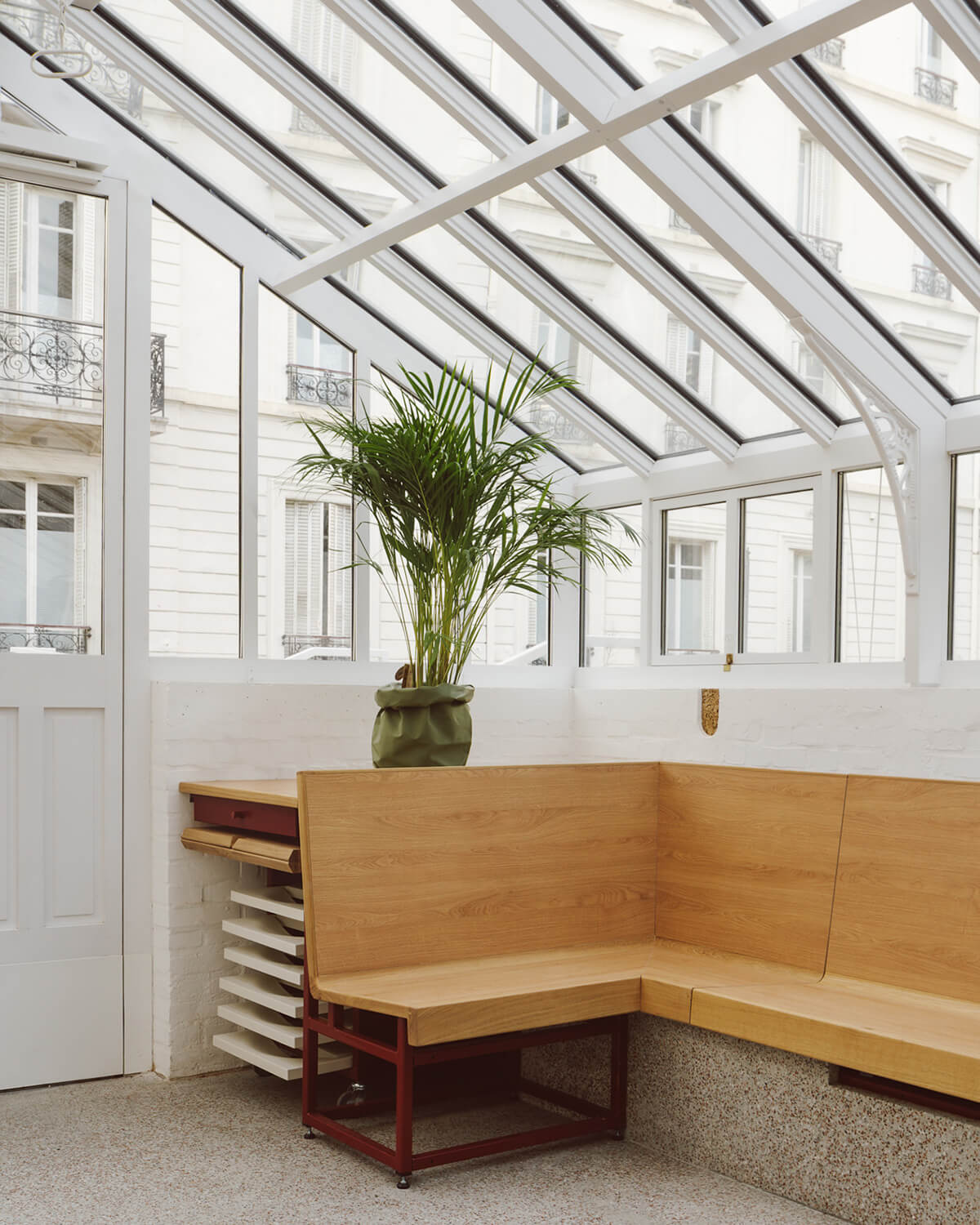 The result is an airy open space that adapts easily to changing needs. “The space allows the patients not just to recover physically but psychologically,” says Neuville of the feedback they have had so far from patients and staff. “It allows them to think about things other than being sick.”