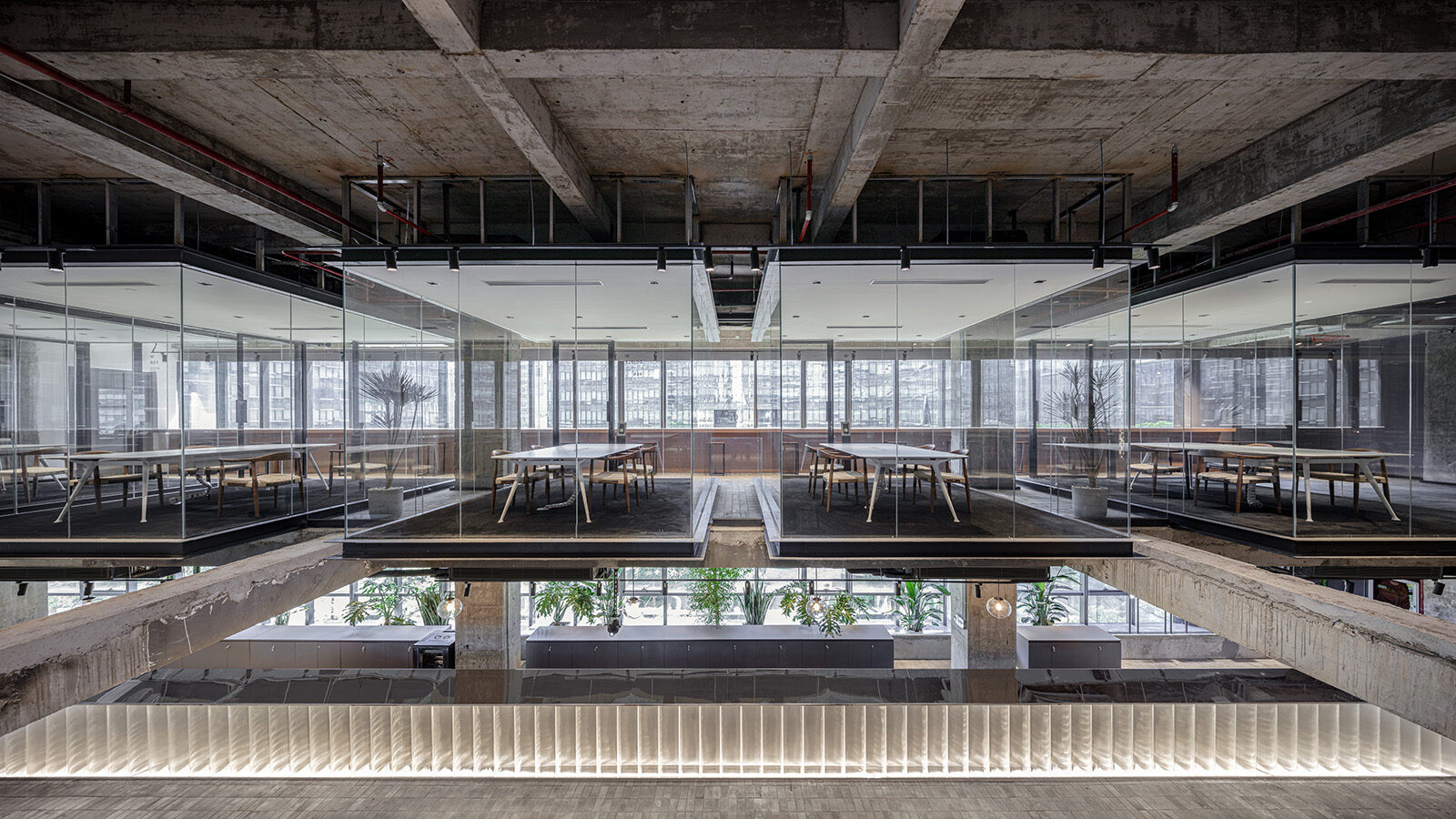 A Shenzen Office Balances An Industrial Setting Against Futuristic Forms

The Shenzhen headquarters of Yeahka, a Chinese company specializing in point-of-sale technology, epitomizes the workspace of the future, where layouts promote high levels of transparency and connectivity. Its most daring architectural gestures: five glass-walled meeting rooms suspended in mid-air that evoke scenes from a sci-fi movie and a dramatic black staircase that both links the office’s tiers and serves as its visual anchor. 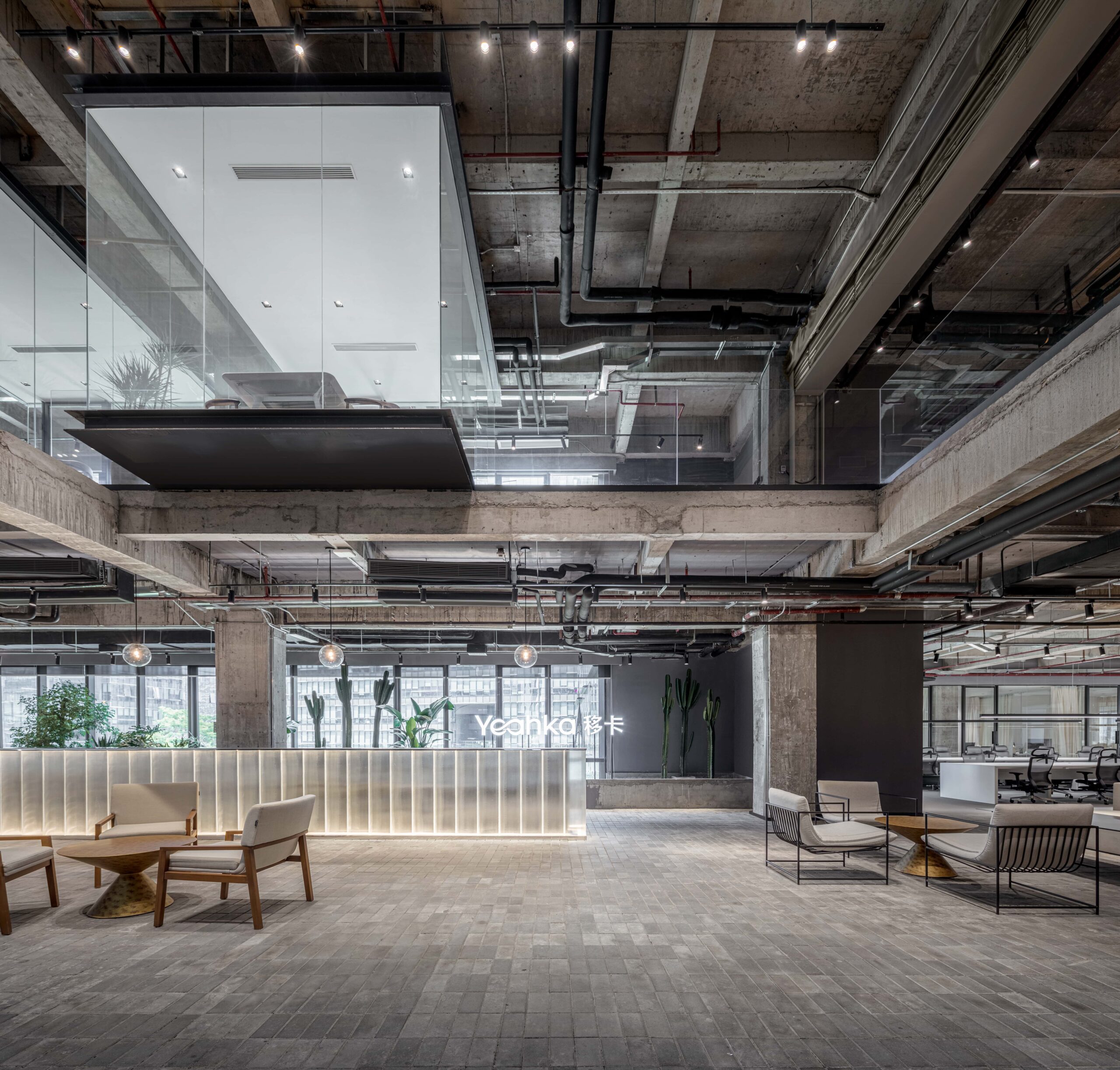 In the three-storey, 6,000-square-metre Yeahka office, five glass meeting rooms are suspended from ceiling beams above the reception area.

Although the building is relatively young, the project required the firm to do some serious demo work. Its approach — which involved carving into the existing floor plates and exposing the concrete structural support columns and ceiling crossbeams — developed from the simple desire to open up the volumes in a way that would convey a strong, unified aesthetic. “The idea,” the architects explain, “was to create openings in order to expand part of the space vertically, bring in more natural light and connect the three floors. We basically destroyed 300 square metres of concrete slabs to create double and triple heights.” 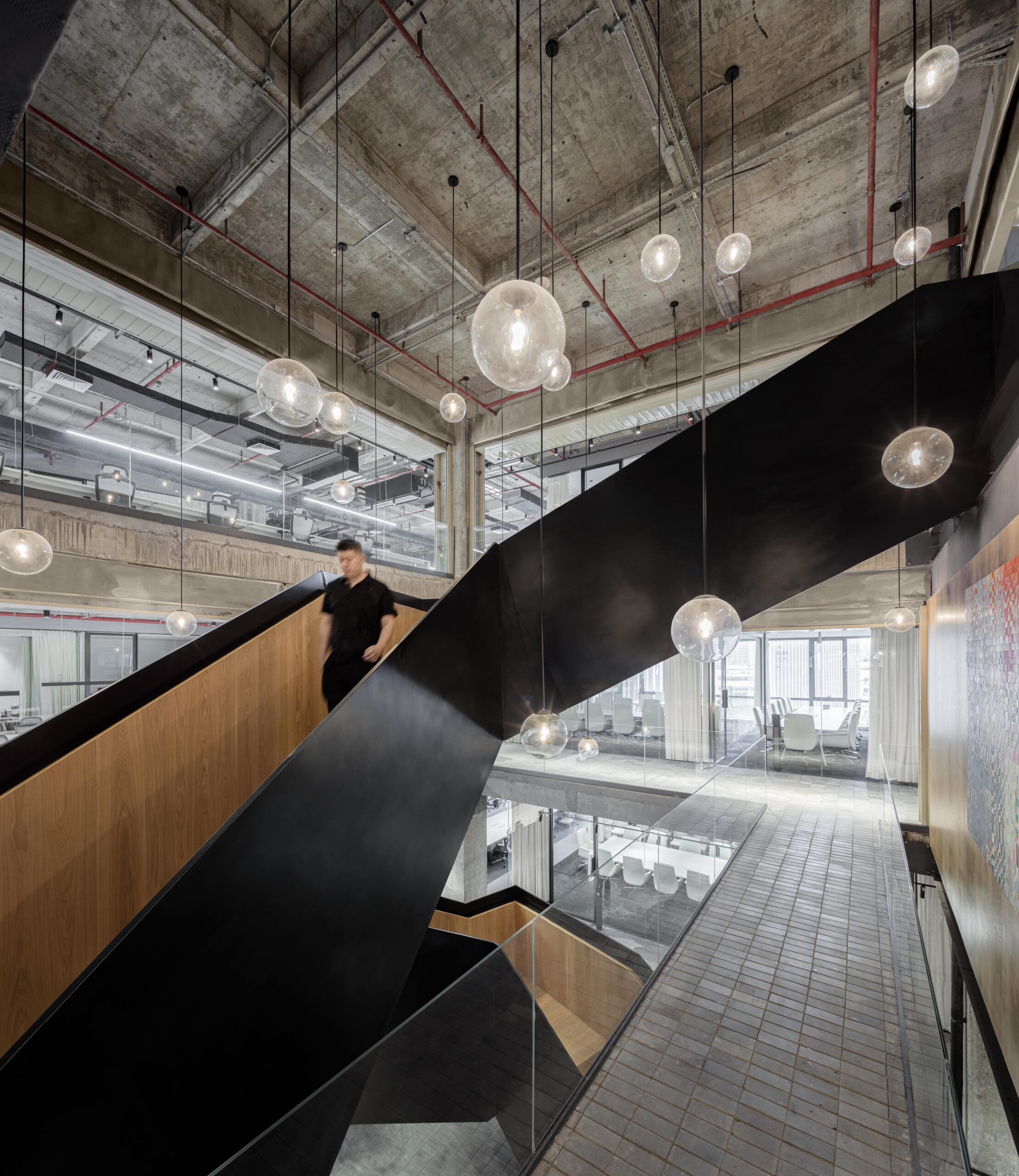 For its overall premises, Yeahka required 600 open workstations, 12 meeting rooms of different sizes, 20 manager rooms and an exhibition area of around 30 square metres where they could showcase their products to potential clients (JSPA ended up providing 70 square metres). On the middle level, the company wanted to host a variety of public venues: a reception lounge, a café, and event and product exhibition spaces, as well as the main entrance to the office. It was a relatively unconstrained brief. “The functional requirements were quite small compared to the floor area of the project,” the firm says. 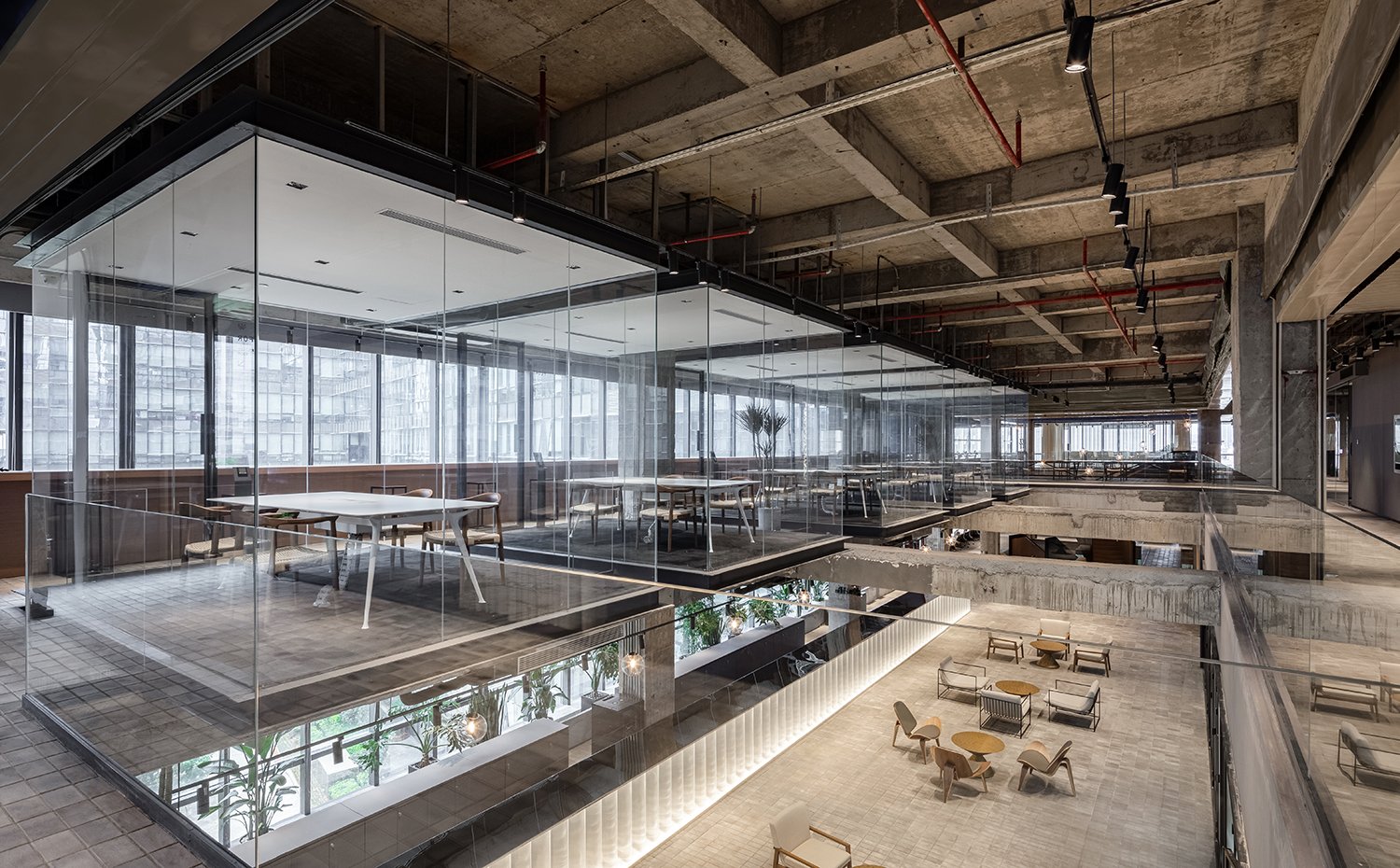 The creative freedom JSPA was afforded allowed it to focus on the interior architecture. This liberty is best experienced on the middle floor. Here, the different functional zones are arranged in one long configuration so employees and visitors can take in end-to-end views of the entire level. The space’s elongated geometry is accentuated by a reception desk, clad in warmly illuminated Reglit architectural glass, that spans the length of the lounge. Above, a large section of ceiling was removed to expand the interiors vertically into a double-height void that stretches to the top floor, where the architects cantilevered the five glassed-in meeting rooms that can be seen from the public areas below. These glazed structures are composed of two parts: a cantilevered floor made of steel I profiles anchored on the existing slabs, and a ceiling suspended by a thin steel structure offset from the exterior of the meeting room. The glass walls were then set up between these two independent structures.

“The rooms’ seeming precariousness evokes a sense of instability and provokes strong reactions.”

The transparent boxes allow those passing through to observe employees gathering for meetings or brainstorming sessions, and creates what the firm describes as “an interesting relationship between a visual connection and actual physical distance among visitors and staff.” The rooms’ seeming precariousness, they say, “evokes a sense of instability and provokes strong reactions.” 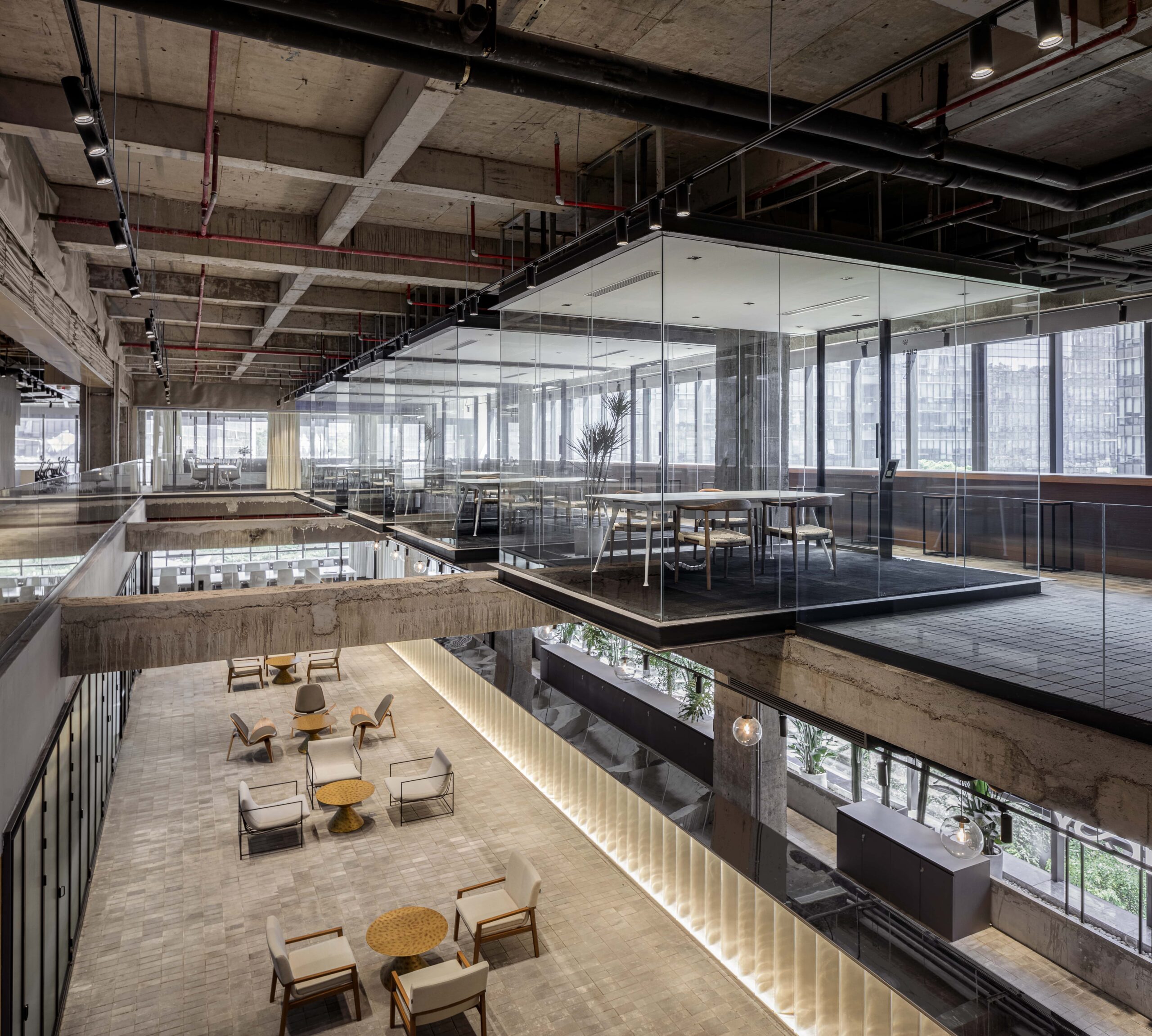 This jolting move is tempered by the strong sense of unity expressed in the angular steel and oak staircase that wraps around the atrium — the office’s main vertical circulation axis, and another of the firm’s interventions into the building’s architectural fabric. “Every structural modification and addition had to be carefully calculated to ensure safety and security while at the same time being elegant in terms of proportions,” the architects explain.

The staircase — composed of two overlapping L-shapes — “flies from floor to floor with no intermediary support,” they say, and note its heaviness “contrasts with the absence of visible structure and gives a strong aerial feeling.” 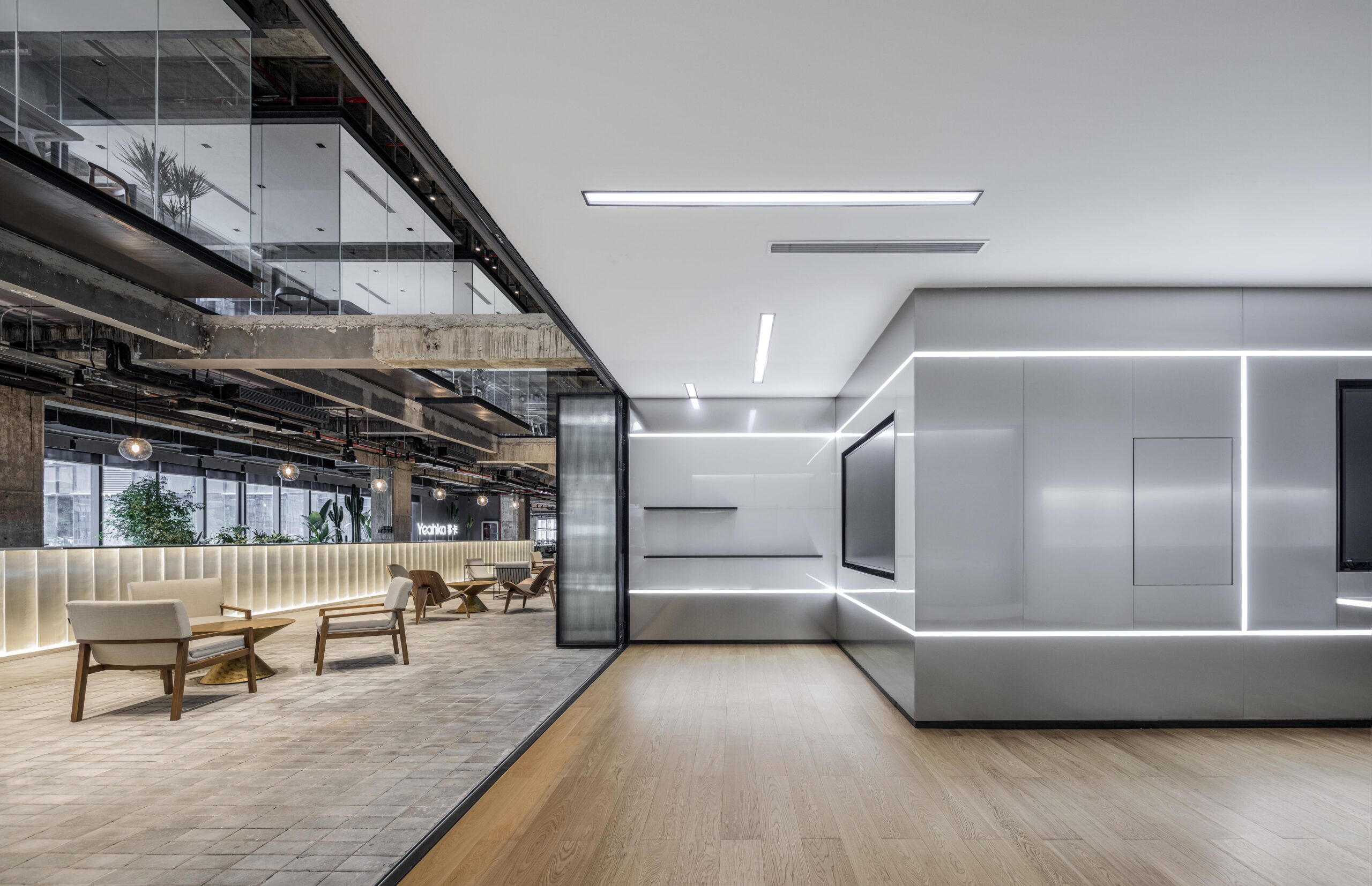 Workstations are aligned around the periphery of the floor plates. A lounge offers a breakout area.

Throughout, the firm achieved a balance between the interiors’ edgy, industrial feel and the warmth imbued by its wood finishes. The roughness of the raw concrete, which is emphasized with track and pendant lighting, also stands in striking juxtaposition with the sophisticated glass and steel used for the windows and partition walls.

Rather than carpeting, concrete block pavers — a material common in outdoor spaces — were chosen for the public areas and corridors, and also on some sections of the walls. Even in its small details, the Yeahka office soars.