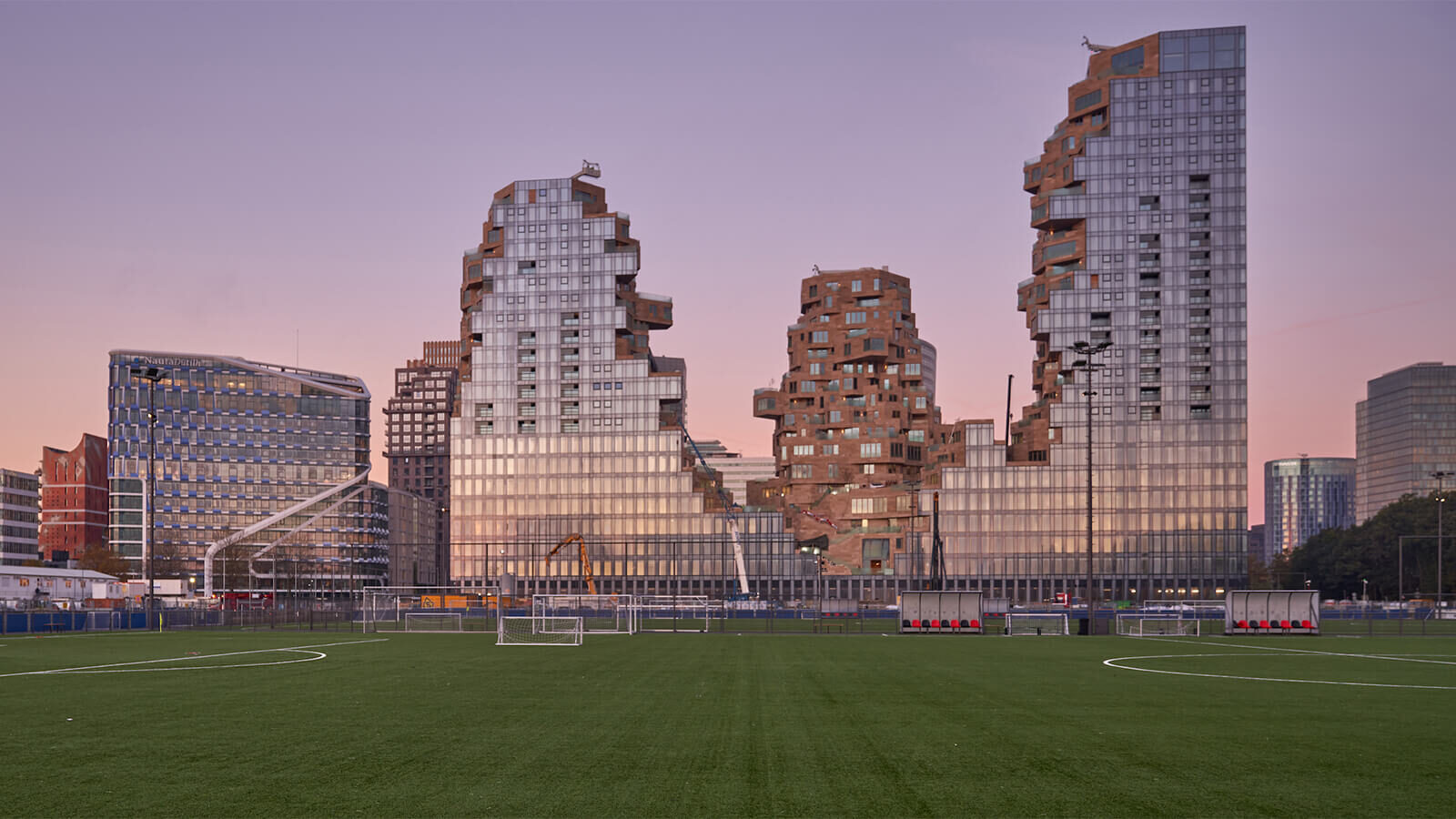 Although it’s within biking distance of the city centre, Amsterdam’s Zuidas neighbourhood and its rows of soulless steel and glass office towers feel worlds away from the city’s iconic canal houses and neo-Renaissance train stations. But a new mixed-use arrival, MVRDV’s Valley, aims to challenge what a modern business district can — and should — be.

“It’s a literal expression of this area becoming alive,” says Gijs Rikken, associate design director at MVRDV. “We made it into a bit of a joke. The flat glass is similar to the fancy pinstriped suits of buildings that are already there, but then we scratch out the inside of those blocks to show that it’s something very different within — there is a human factor being introduced to this site.” 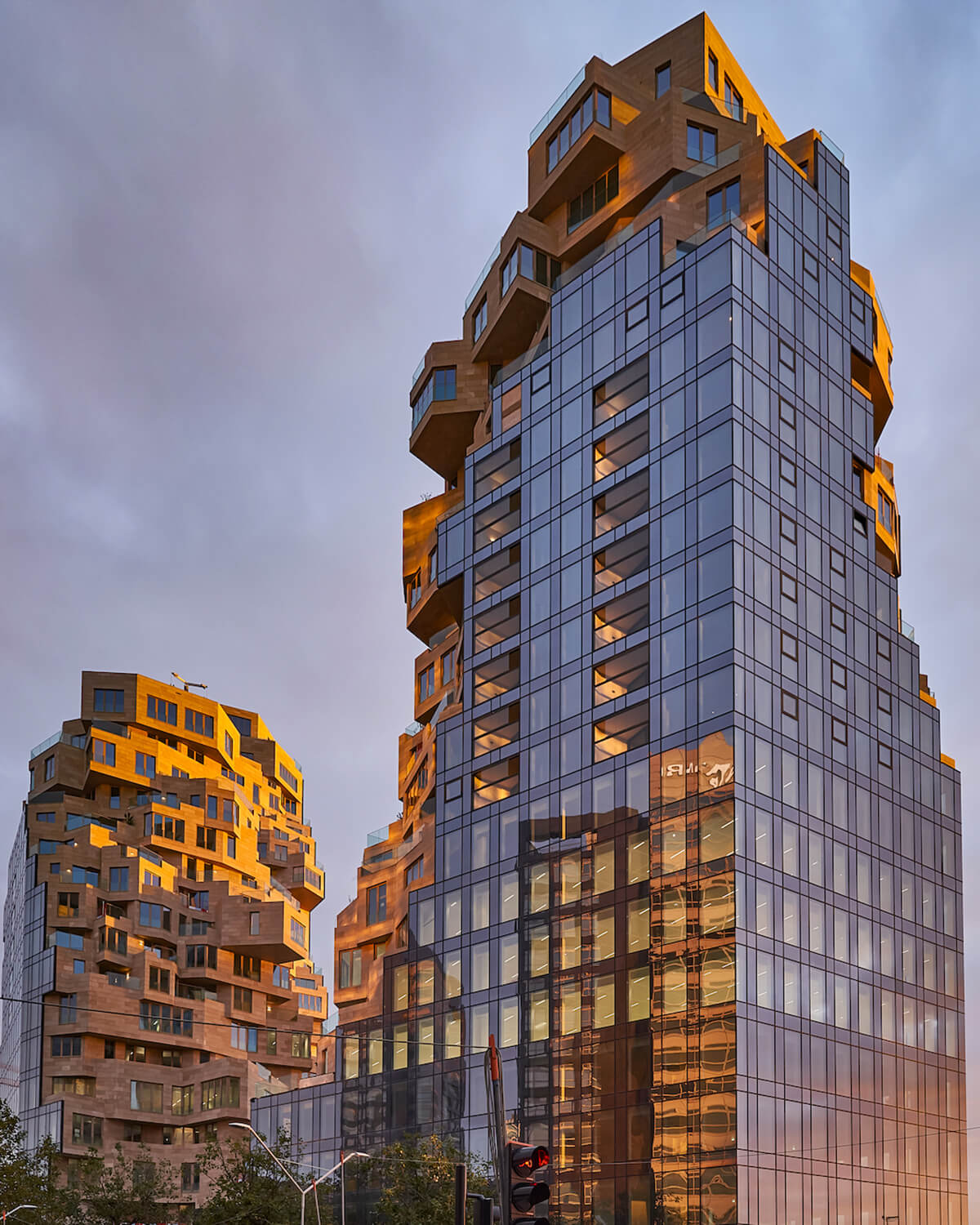 Valley’s three towers transition from flat glass facades — a nod to the corporate character of the nearby office towers — to angular terraces clad in Spanish Cenia stone.

Encompassing a total of 75,000 square metres, the brawny complex makes room for apartments, office space, shops, restaurants and even an environmental think tank, Sapiens, led by the Naturalis Biodiversity Center. The tallest of its three towers rises 27 storeys and 100 metres into the air. 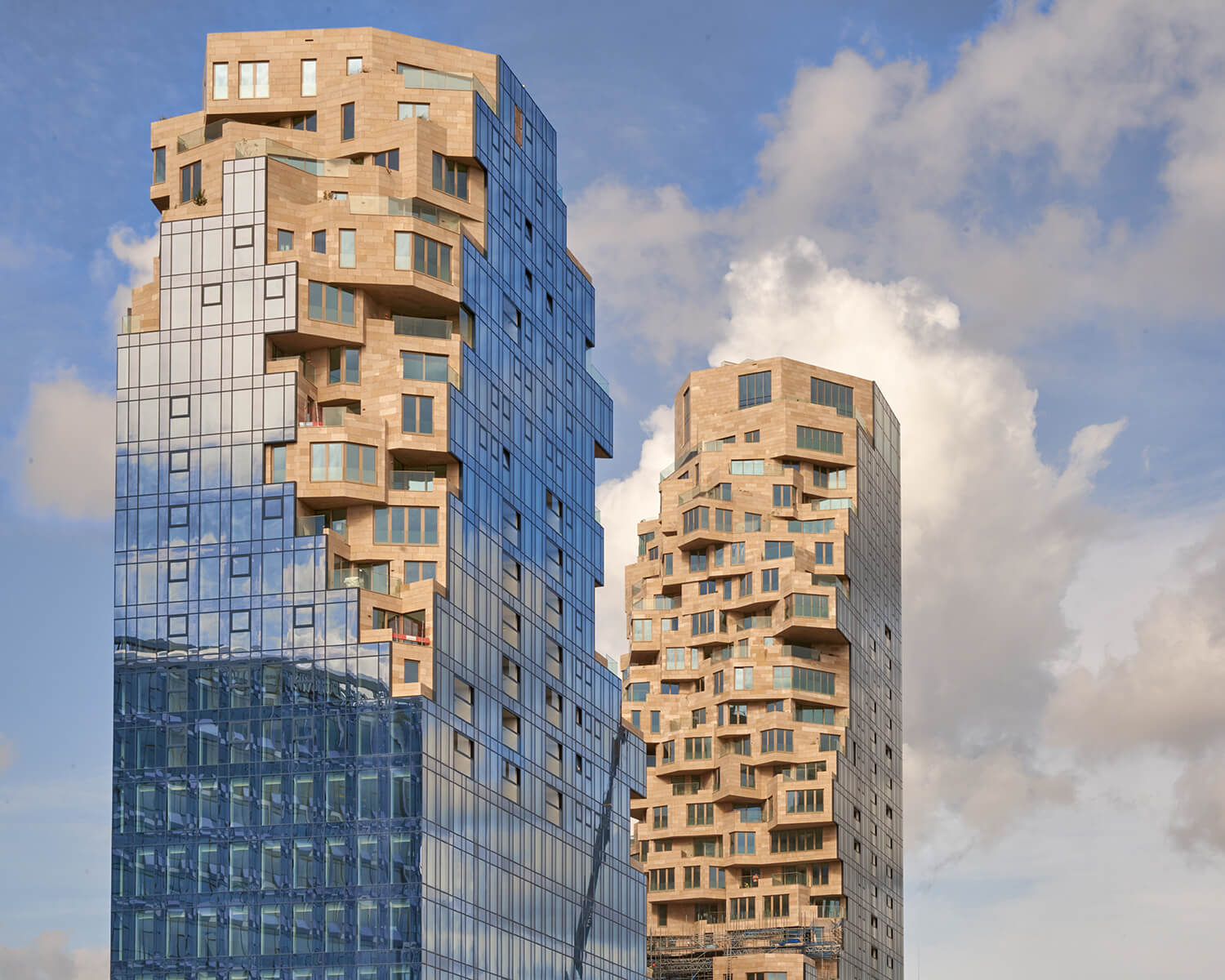 Yet rather than shooting straight up, the complex’s volumes are staggered like a mountain range. Treating each building’s glass facade like a rock face, the architects carved out layered notches and terraces, optimizing their placement for light and privacy using parametric tools before cladding them in Spanish Cenia stone for an appropriately natural finish. On the ground level, the cavernous “grotto” functions as a pedestrian mall that feels far more spectacular — and more intimate — than anything in the neighbouring corporate plazas. 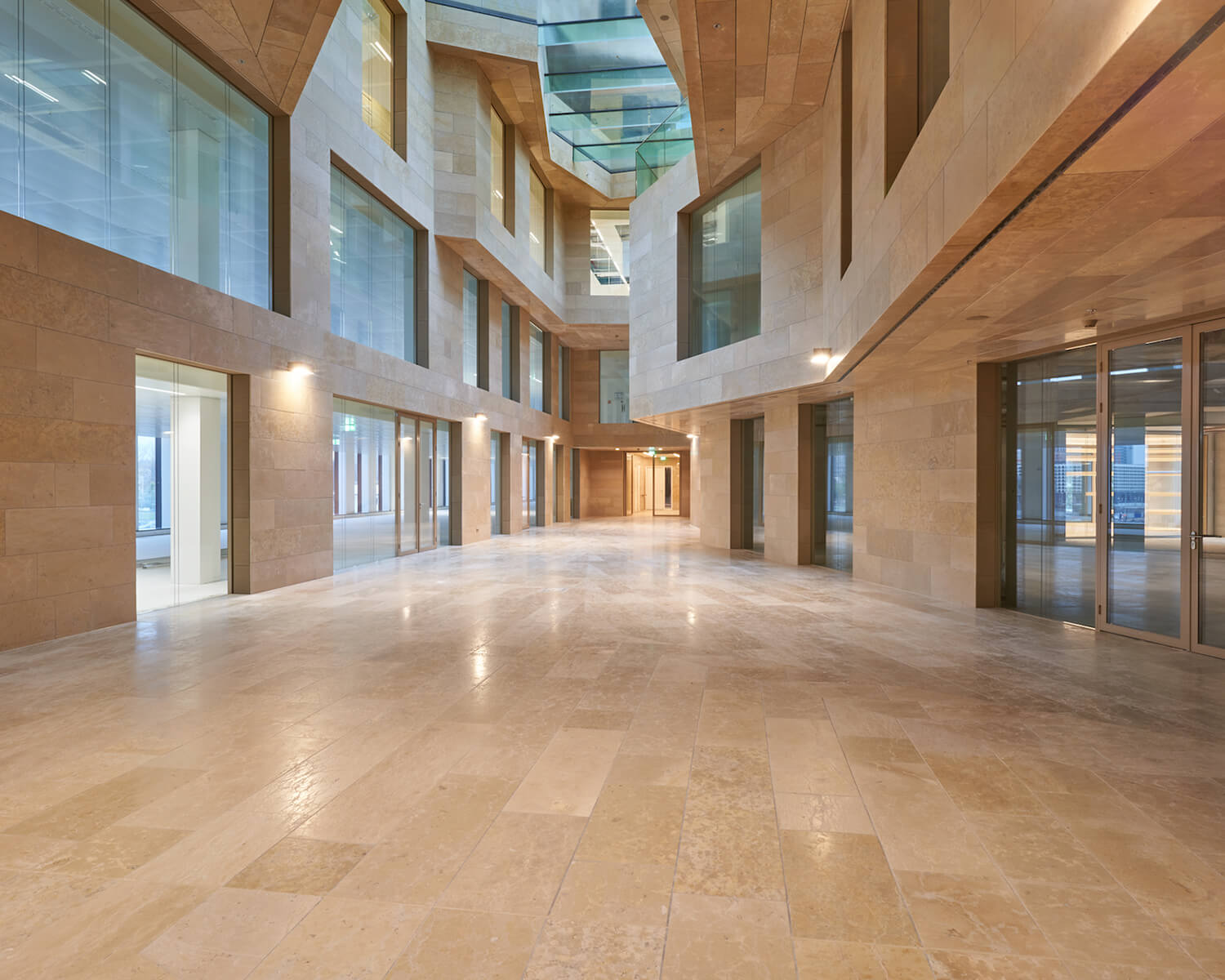 On the ground floor, the stone-clad “grotto” will act as a cave-like commercial foyer illuminated by a jagged glass ceiling.

The towers also funnel into the project’s namesake valley, a soon-to-be-completed green space designed as a series of staircases that lead to tiered platforms where residents and passersby can look out over the sports fields and skyscrapers beyond. “I hope people don’t walk past,” says Rikken. “I hope they walk up. Because they’re allowed to. One of my favourite points is the accessibility — the fact that this is a public building. Having the ability to walk up those stairs, it’s a fantastic moment.” 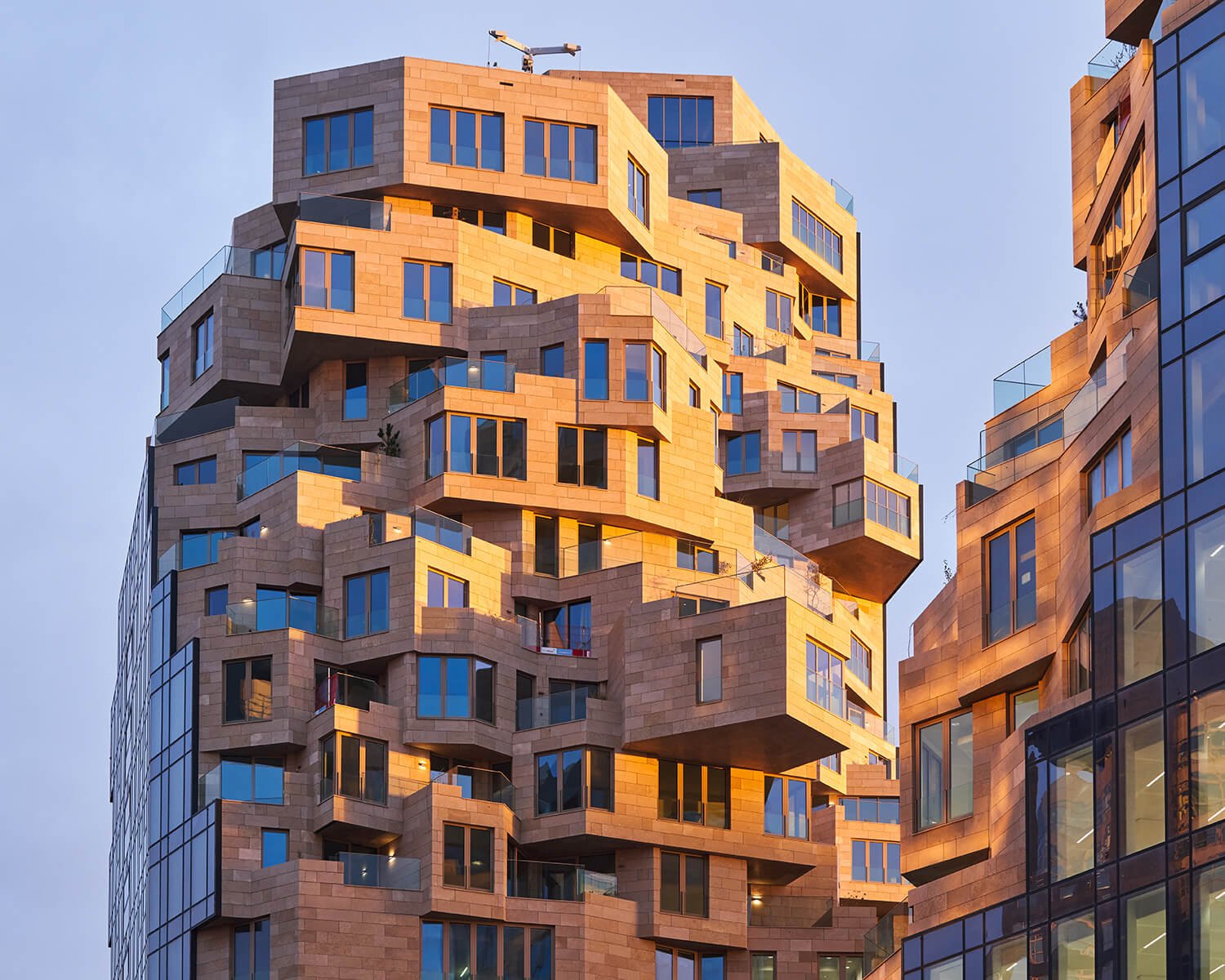 Granted, MVRDV has a checkered history with its past attempts to reshape urban topography. Last summer, the firm designed Marble Arch Mound in London, which was meant to be a temporary public green space covered in trees. The result was widely considered a failure — a £6 million pile of brown sod and twiggy young trees. In an open letter about the fiasco, MVRDV blamed a “loveless execution” of its initial design. 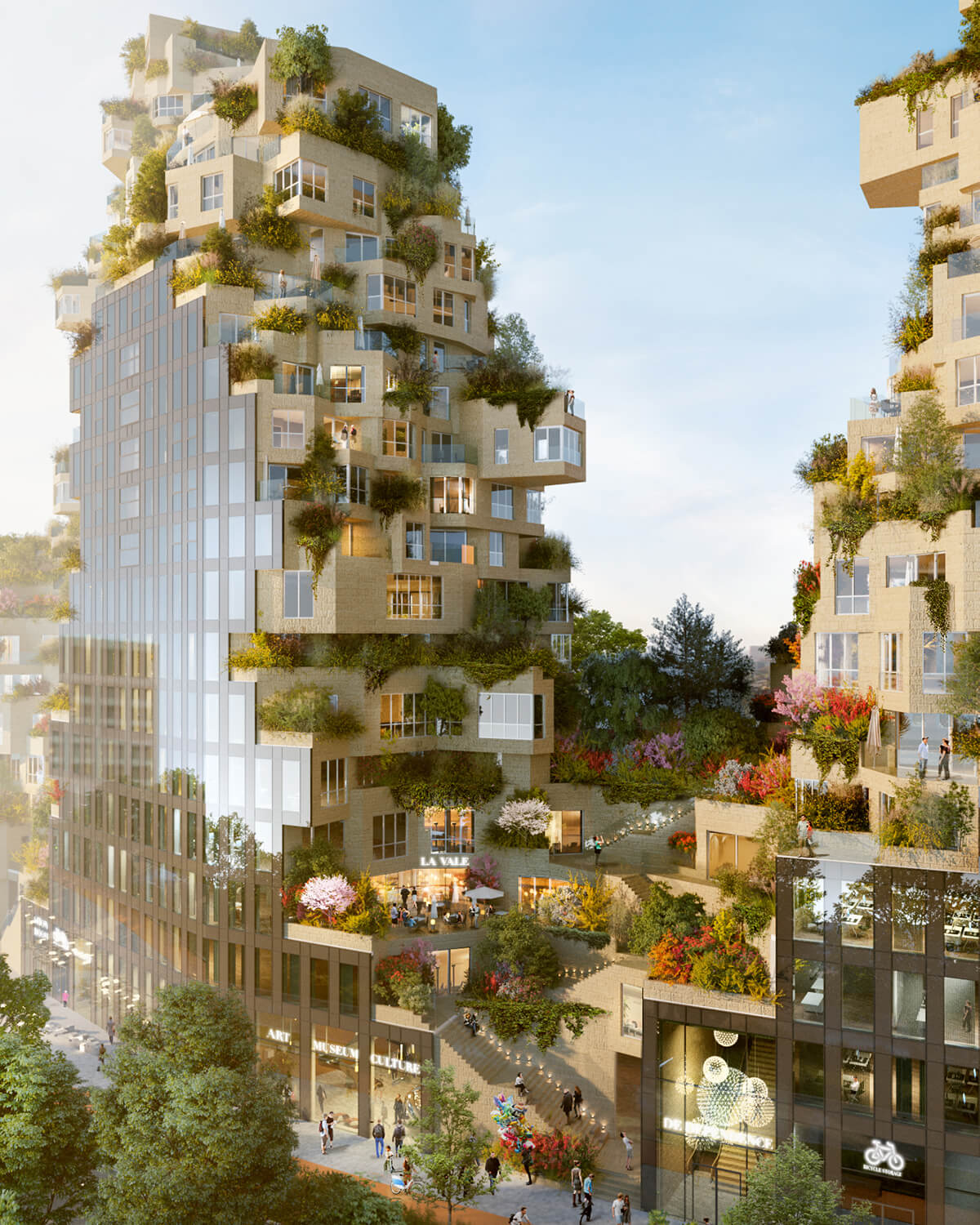 MVRDV and landscape designer Piet Oudolf are currently planting trees that will deliver year-round greenery, softening the building’s hard edges. But it remains to be seen whether Valley’s tiered park will measure up to the lush look of the project’s renderings.

Now, Valley offers a chance at redemption. While the project’s architecture displays a kind of brutal beauty, its real success hinges on a complex urban forest envisioned by landscape designer Piet Oudolf. Supported by “automatically hydrated” planters, foliage promises to breathe life into the project, softening its exterior and bringing that coveted human element to the neighbourhood. Based on the renderings, the final result could end up bridging the gap between Habitat 67 and Bosco Verticale. 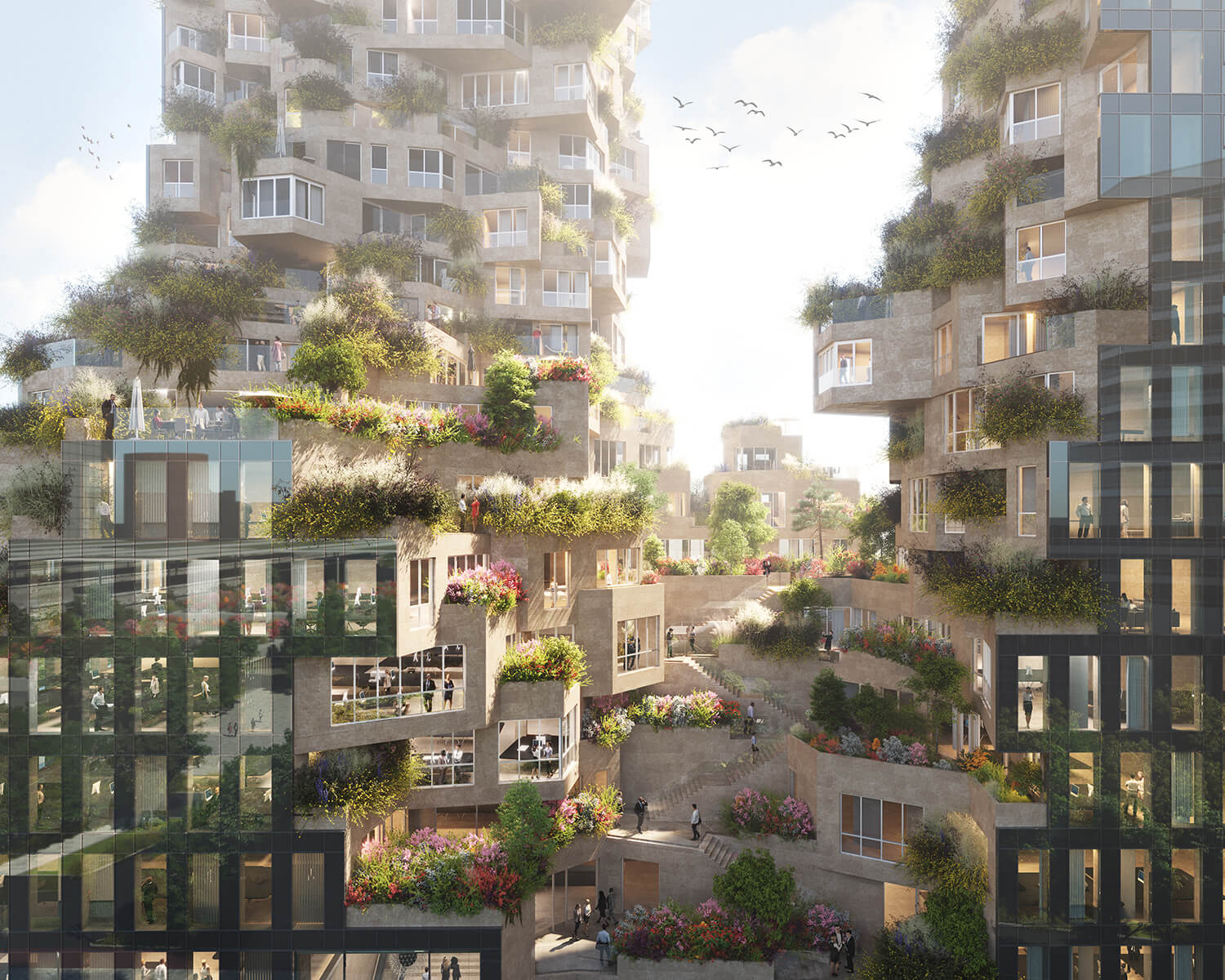 Mind you, it will take at least two more years for the plants to come into their own. Until then, Valley’s full effect will require a bit of imagination — which is also, for MVRDV, its own kind of success. “I hope,” says Rikken, “it questions that tendency we have to build things that are straightforward and not innovative.” By both mirroring and subverting its commercial surroundings, Valley makes a case for more uncanny landmarks.