A Vancouver Home that Lets in the Light
In this house on a busy street, Measured Architecture finds a way to insert expansive glazing without sacrificing privacy 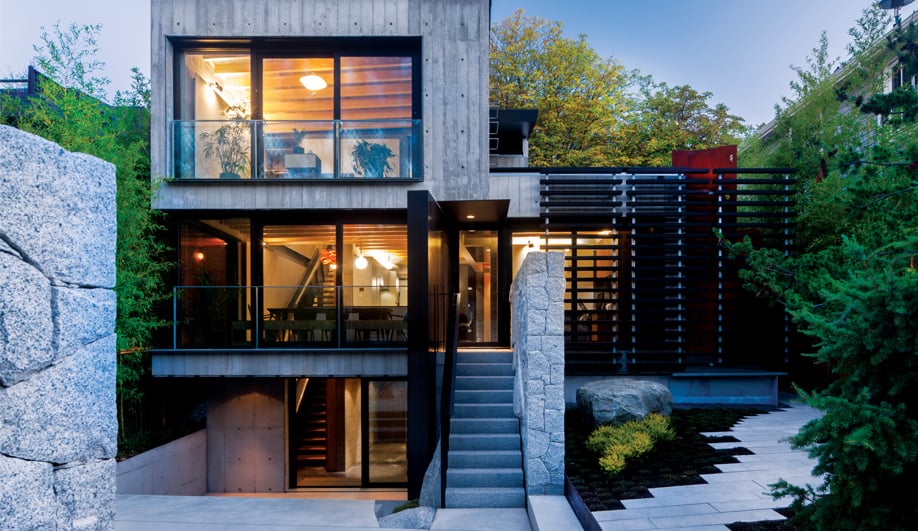 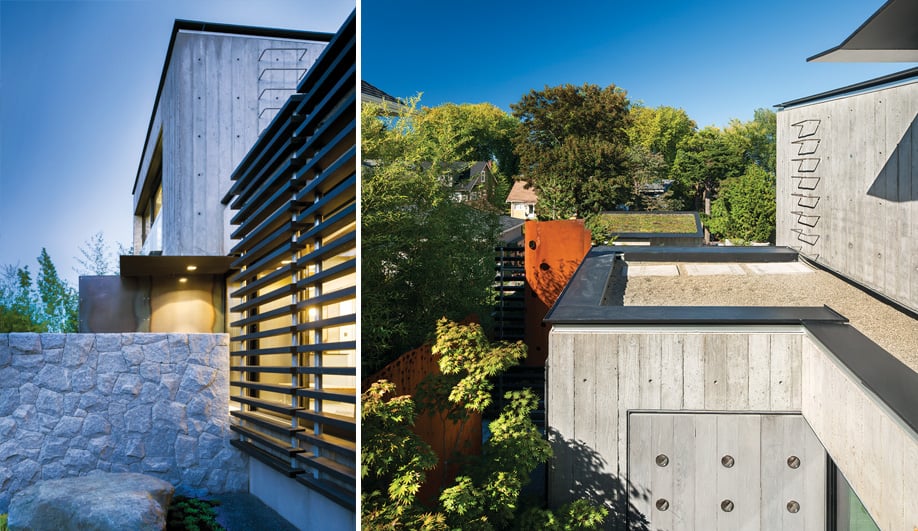 Left: Charred fir planks are used over the windows as scrims. 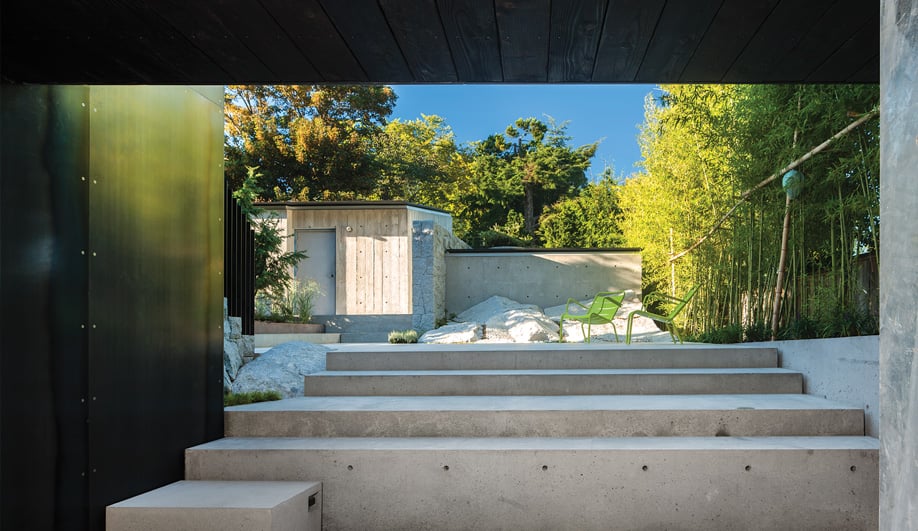 Steps lead from the main house to the backyard and the guest house beyond. 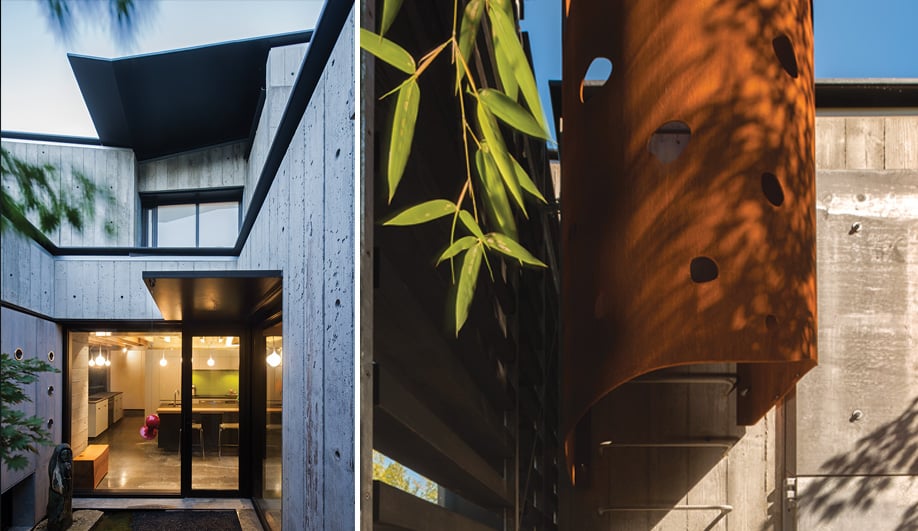 Left: Double-thick concrete walls emphatically display the rough look of board-form wood grain; Right: A ladder to the rooftop is surrounded by steel perforated with random holes. The house has numerous such “micro-moments,” which lend it an unexpected playfulness. 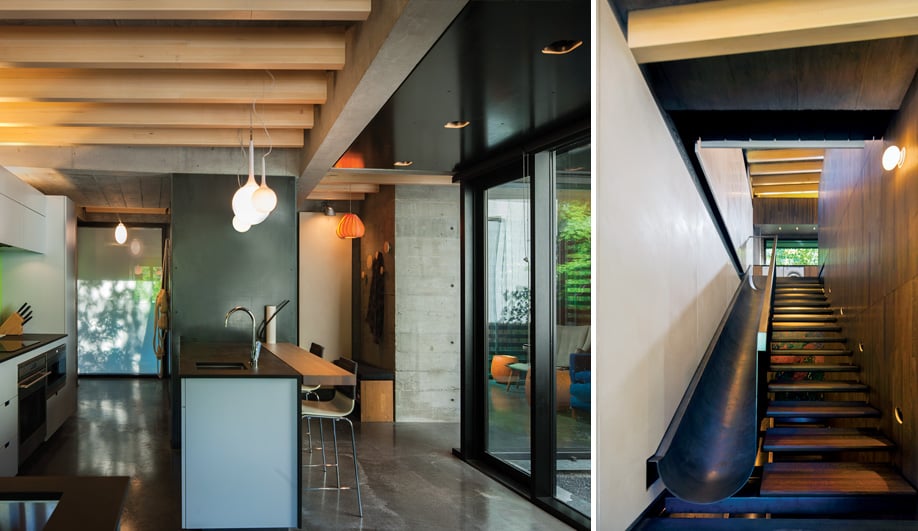 Left: Exposed concrete on the floors and walls gives a rugged, textured look; Right: A steel slide next to the stairs is for the grandchildren. Later, it can be converted into a stair lift.

Within the cheek-by-jowl dwellings of central Vancouver, Cloister House serves up a rare delicacy: seclusion. The house was designed for a client who is inclined to privacy – a desire that seems arcane these days (or perhaps architects and developers are just disinclined to address it). Conceived for a woman whose grandchildren visit often, the house resonates with drama inside while projecting a quiet modesty to the street. The client, reports architect Clinton Cuddington, “wanted to see out but not be seen, so we fortified the view on one side and let the sun in on the other.”

The house is something of a new paradigm for Measured Architecture, the local firm Cuddington founded in 2007. Its first major residential project was a behemoth known as Wolfe House, which became a kind of calling card for the firm, and a chance for him to try out his favourite materials (earth-toned granite) and gestures (artfully juxtaposed asymmetric volumes and planes). More recently, Measured has raised its profile with a deft renovation of Equinox Gallery, via a scheme that strategically configured expansive sheets of white drywall to amplify the gallery’s sense of extroversion. Cloister House is the conceptual opposite: a tautly proportioned, highly private house – an architectural introversion.

Along with Piers Cunnington and Katy Young, Cuddington has imbued the project with what might seem like contrary characteristics: deliberate darkness, industrial materiality and playfulness. The defining material is charred board form concrete, which emphatically displays the rough wood grain. The secondary materials, torched wood and galvanized steel, mark the house as audaciously contemporary. The fir planks used for the formwork were re-charred, which rendered them dark and durable, and then installed over the front-room window wall and throughout the house as scrims.

In a neighbourhood that is slowly being devoured by monster homes, Cloister can be seen as a sustainable offering, relatively speaking. The existing dilapidated bungalow was carefully pulled apart by hand, as part of a city-supported pilot project to supply job training for underemployed youth. The new build nods to eco-friendliness by virtue of its size: at 223 square metres, plus a 56‑square-metre guest house, it’s still well below the lot limits. It also employs the Passive House Standard for heating and cooling.

Sustainability, though, is a multi-step dance; the eco-savings in those realms are partially offset by eco-spending in others. Steel and reinforced concrete are strong-arm materials imbued with energy conservation. Here, they are doubled up, with some of the home’s already-thick concrete walls sheathed in steel. The material choice also enables a hyper-clean environment, essential for the client’s asthma (for this reason, there is not an inch of drywall in the entire house). Above all, this is an architecture that celebrates the underrated glories of the dark, dense enclave.

The occasional double ply of load-bearing concrete and steel amplifies the density – not the usual dwellers-per-square-foot definition of density, but in the material sense of the word. “People sneer at how out of control galvanized steel is,” says Cuddington, “but that’s what is so great about it.” Similarly, the visible rubble in the concrete aggregate: “That’s the sort of coarseness we want in a building, to give it life instead of making it so polished and alienating. It’s process expressed rather than concealed.”

The house exudes life in what he refers to as “micro-moments,” a flush-to-the-ground window in a study alcove; an amorphous fence of oxidized steel by artist Fei Disbrow; and the front facade’s dynamically canted sub-wall. One of the most playful gestures is found in the waxed mild-steel slides affixed to both staircases – for the grandkids now, and convertible to a stair lift in the future.

The guest house, too, is atypically built, with one sub-grade level and one storey above ground. Its green roof is tipped toward the house to offer an unexpected garden view. Sinking the abode into the ground was more expensive, notes Cuddington, but “it gave us the ability to turn it into an asset: an elevated landscape.”

Inside, the ceiling’s glulam beams don’t quite reach either wall, because they are acting not as horizontal support beams, but as external reinforcement for the concrete ceiling-floor span that separates the first and second storeys. What looks slightly unnatural is actually the expression of its function, which, on many levels, explains the power of the basic forms and raw materiality of the entire project. As the architect says, “It’s so damn beautiful to express something tectonic.”