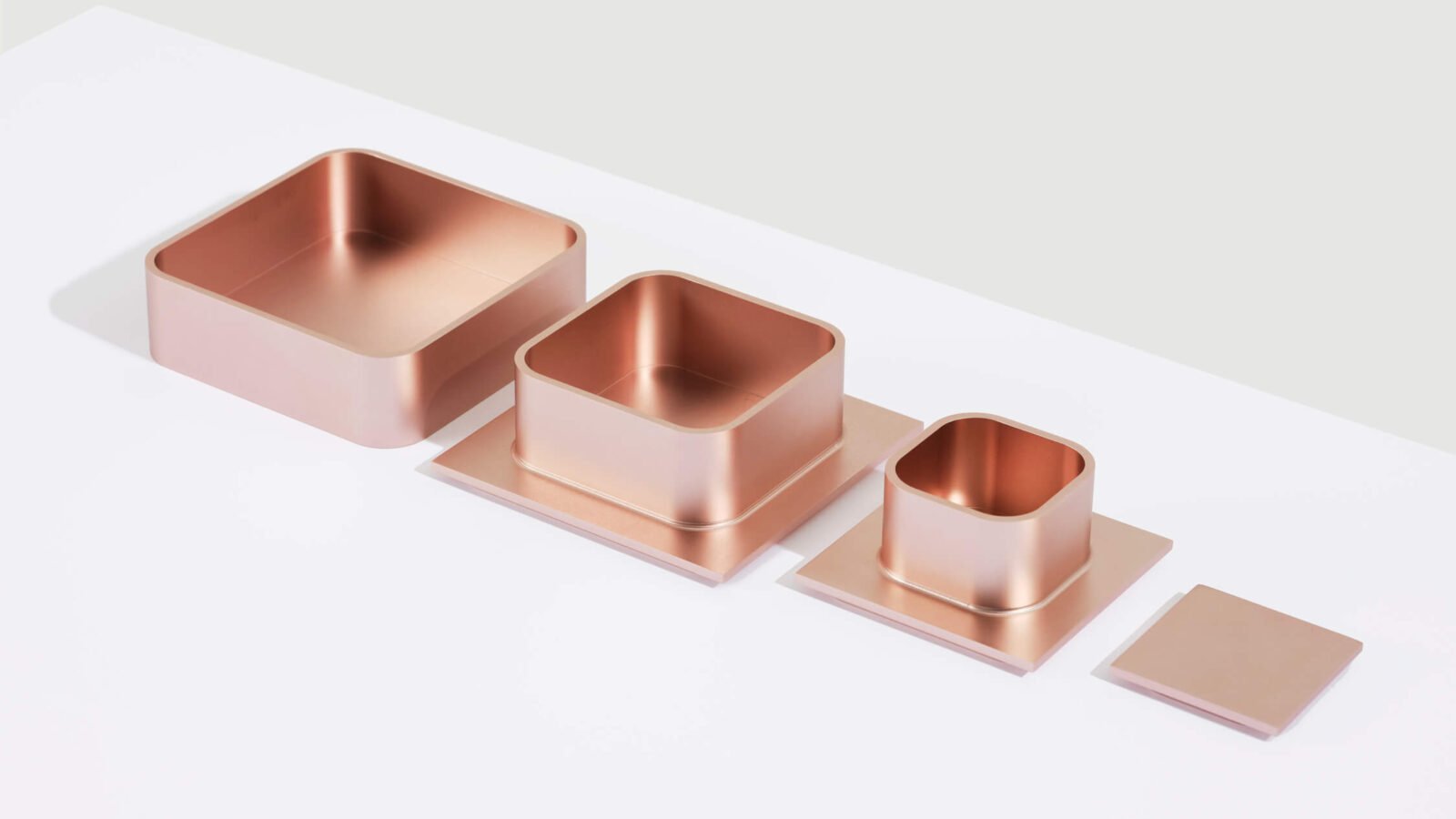 What Can You Do With Aluminum? According To These Canadian Designers, Quite A Lot

A recent exhibition in Toronto convened 15 emerging and established designers to test the limits of the ubiquitous material.

Aluminum. Comprising eight per cent of the Earth’s crust, it’s the most abundant metal on the planet and the third most common element. This ubiquitous material was also the subject of a recent group exhibition organized by local studio MSDS with Toronto- and New York-based Jamie Wolfond and mounted at Erin Stump Projects (ESP) during the 10th edition of DesignTO this January.

Bringing together 19 works by 15 emerging and established designers (including Lukas Peet, Zoë Mowat, Anony, Calen Knauf, Castor and many more), “Aluminum Group” showcased “both practical prototypes and pieces of sculpture,” say the organizers. From mills to vases, a candle holder to an ice-cube tray, these works reveal a “diverse range of themes unified by a single medium.” Here are a few of the standouts: 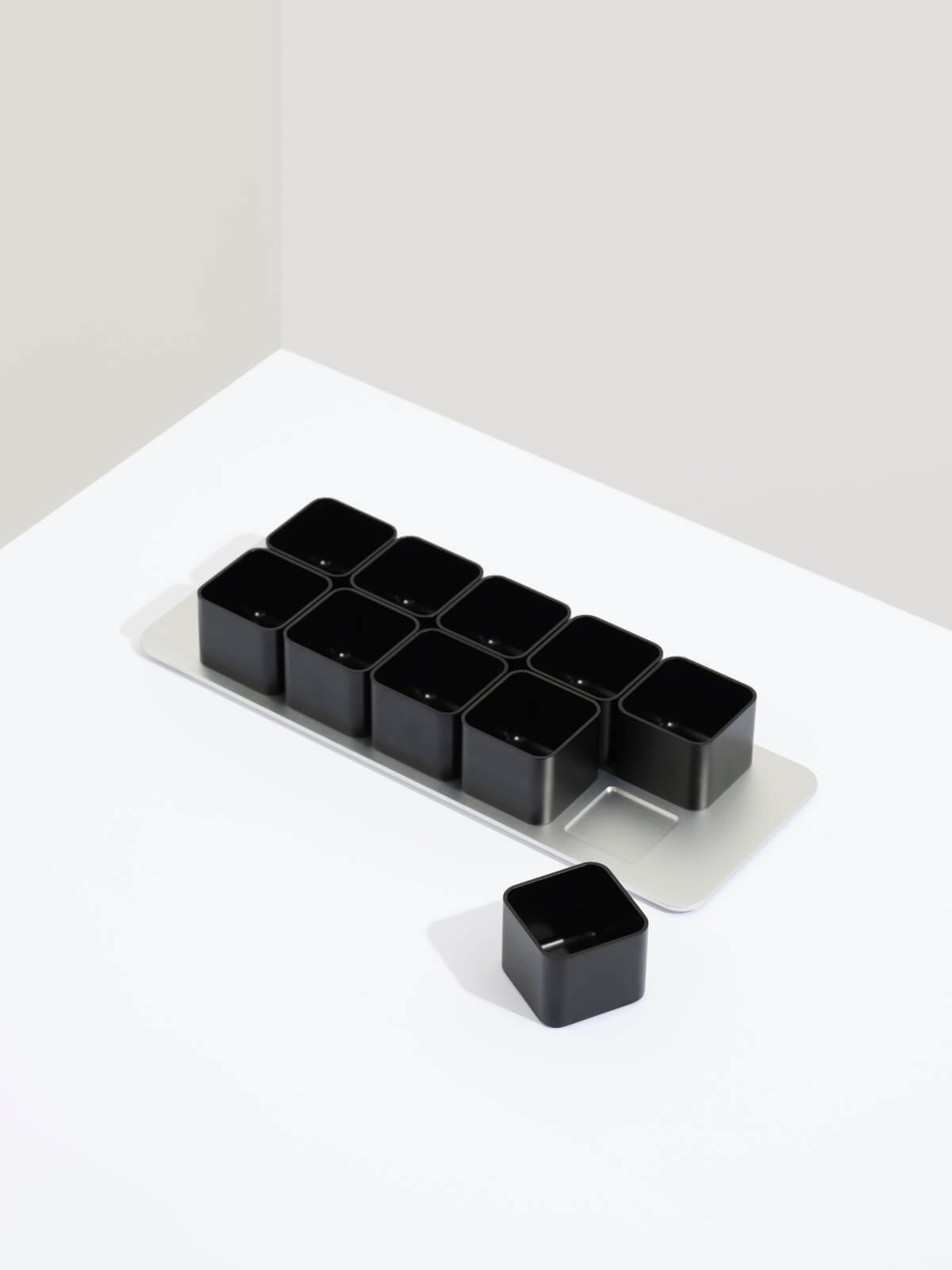 There’s a deep sense of ceremony in pouring a drink: hearing the clink of an ice cube against glass and the crackling of its surface upon contact with a liquid. It’s a sentiment that appears to have resonated with Montreal designer Rachel Bussin, whose jet-black aluminum ice cube tray elevates a mundane object to the level of ritual it deserves. 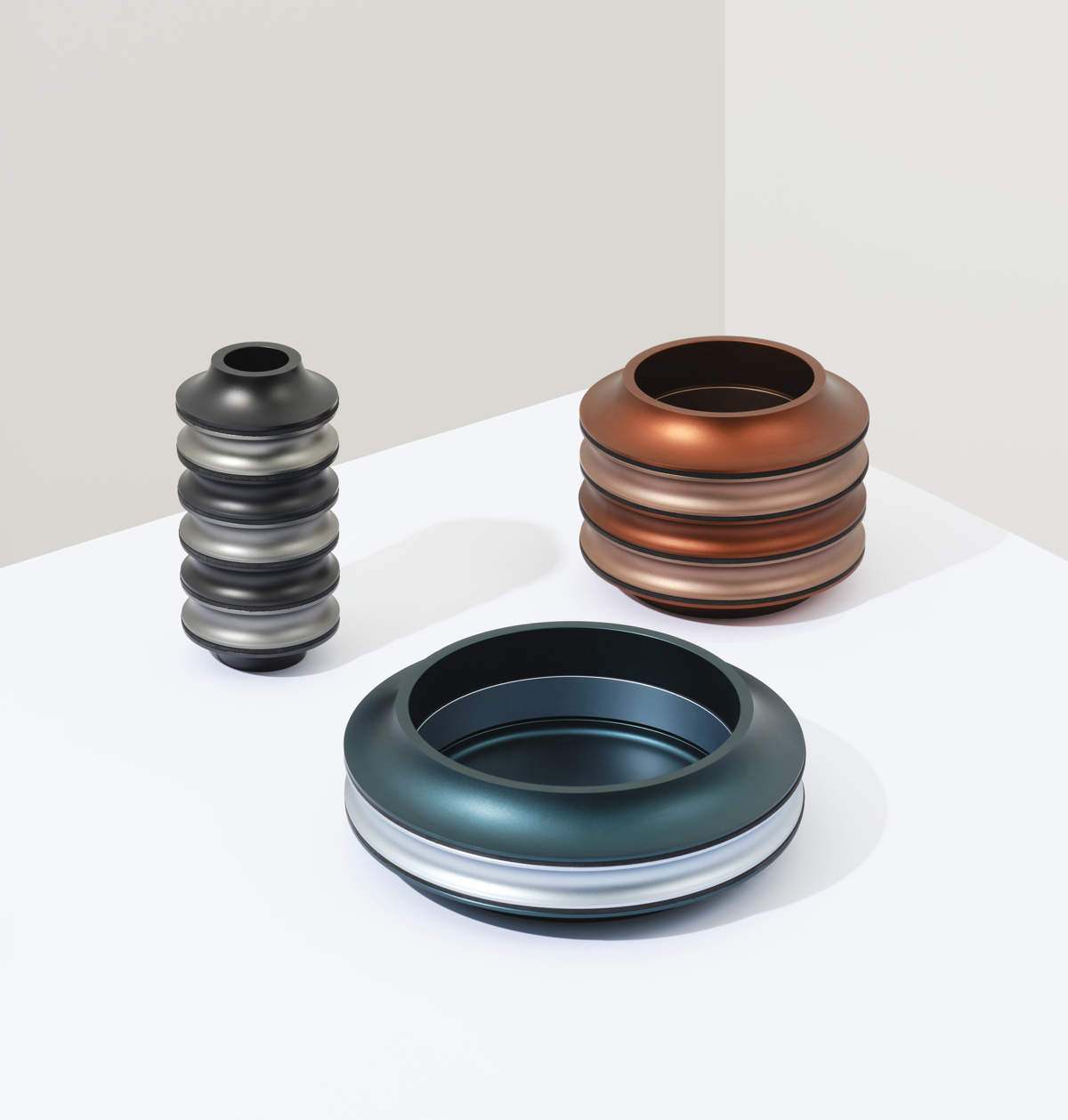 Toronto-based Tom Chung‘s Gasket Vessels – a series of two-toned vases in three heights – derive their form (and name) from the shapes of prefabricated pipe gaskets. Once threaded together, the mechanical seals that define the diameter of each object form watertight joints suited for any bouquet or arrangement. 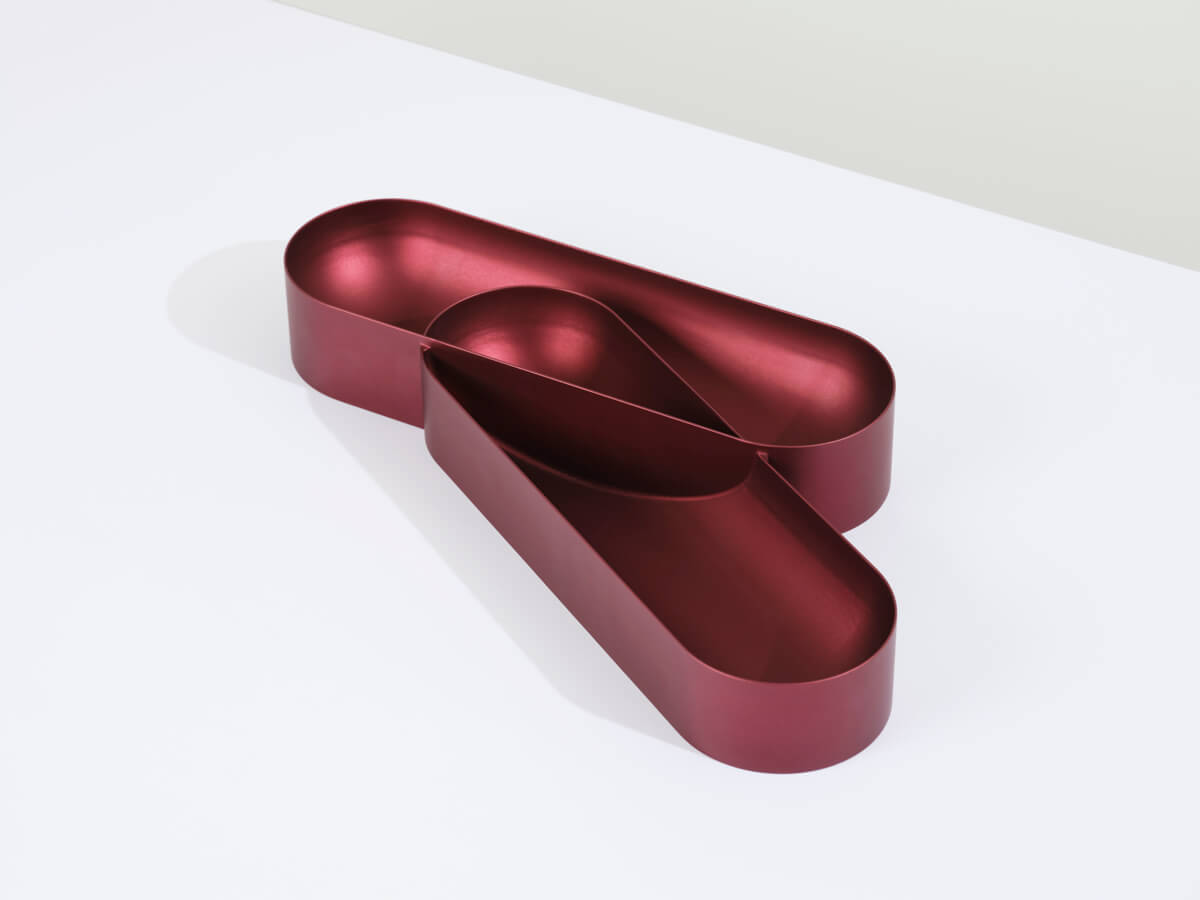 Drawing from the New Brunswick vernacular, Saint John-based designer Geof Ramsay‘s metallic burgundy Compound Bowl borrows its intersecting form from the time-lapse movement of a ship pulling into harbour. It’s a subtle twist, one that creates three curving pockets that are as striking when empty as when full of precious objects. 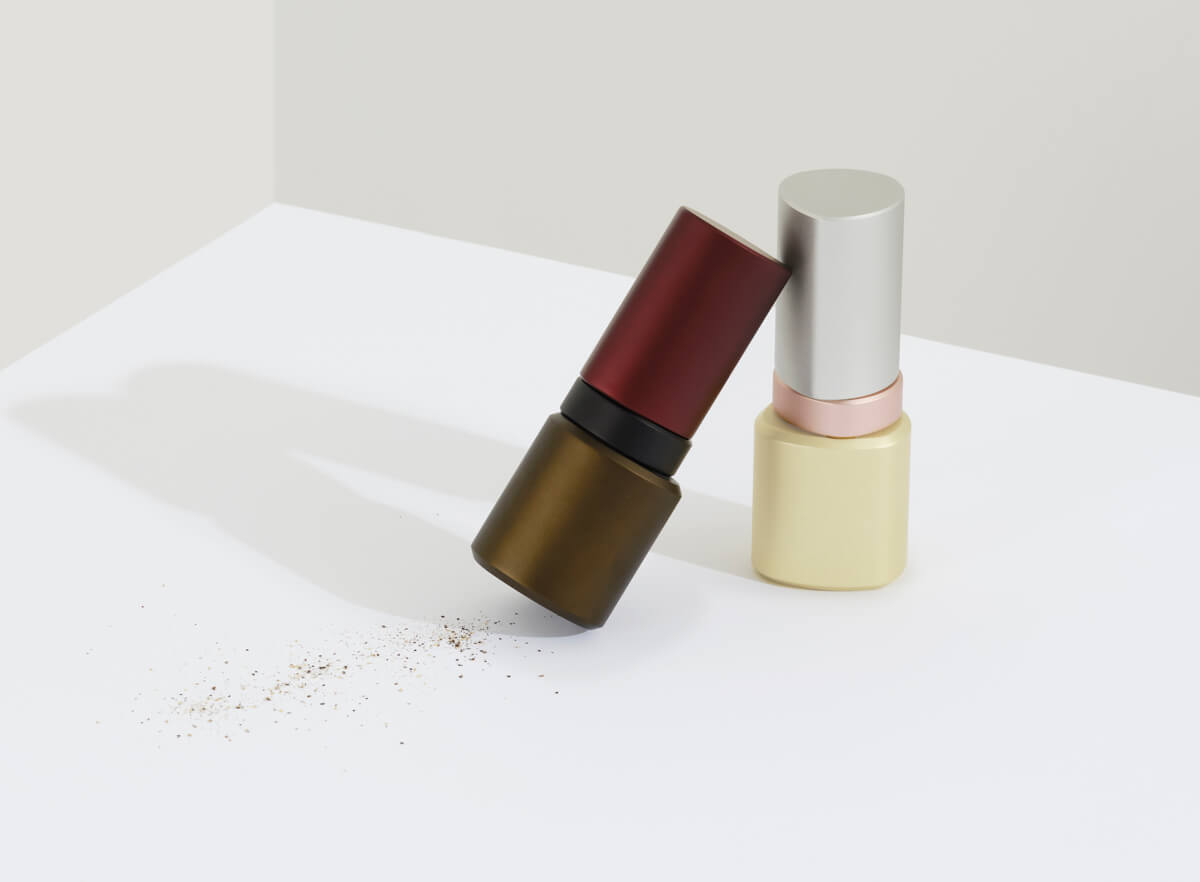 Designed by Lukas Peet, one third of Vancouver’s luminaire design and manufacturing studio ANDlight, the S/P Mill is a playful continuation of the formal qualities in the brand’s recently launched Pebble Series. Each mill consists of three stacked components – based on imperfectly hand-drawn circles, turned from solid aluminum and anodized to match the hues of various kinds of salt and pepper – that constantly shift in composition during use.

Having worked with the brand EQ3 and design giants Yabu Pushelberg, Canadian ex-pat Dylan McKinnon exhibited two striking new pieces at ESP. His interconnected Modular Candle Holder is conceived as a series of tiered vessels that support sticks on one side and shallow tea lights on the other. 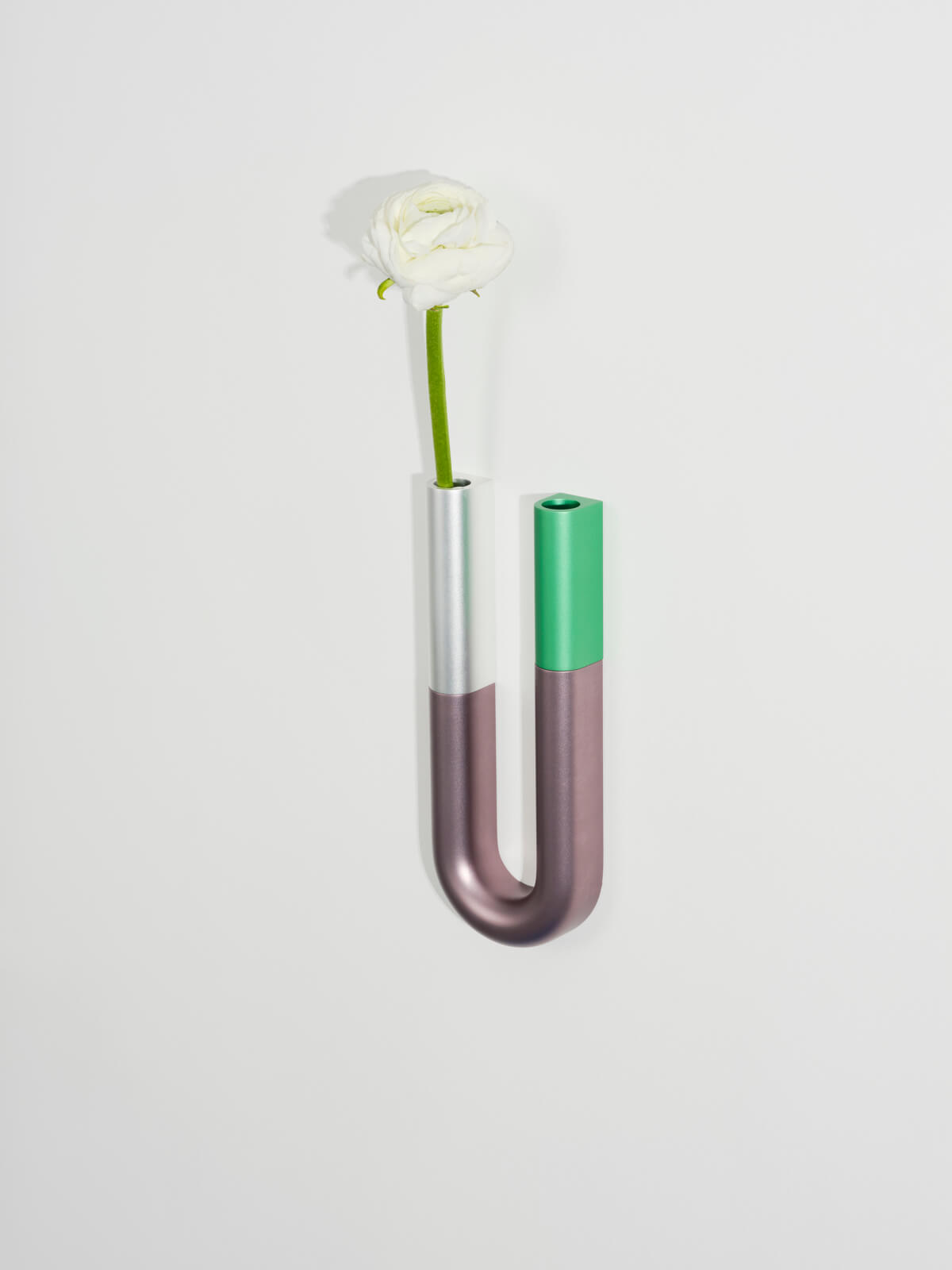 Blocks of bold colour and sharp material combinations are a hallmark of Montreal-based Zoë Mowat‘s work. Comprised of milled and anodized aluminum, the U-shaped Conduit Wall Vase follows suit with two detachable vessels (one in striking silver and the other bright green) that can be mounted on the wall, displayed on a table or turned over to hold a candle. 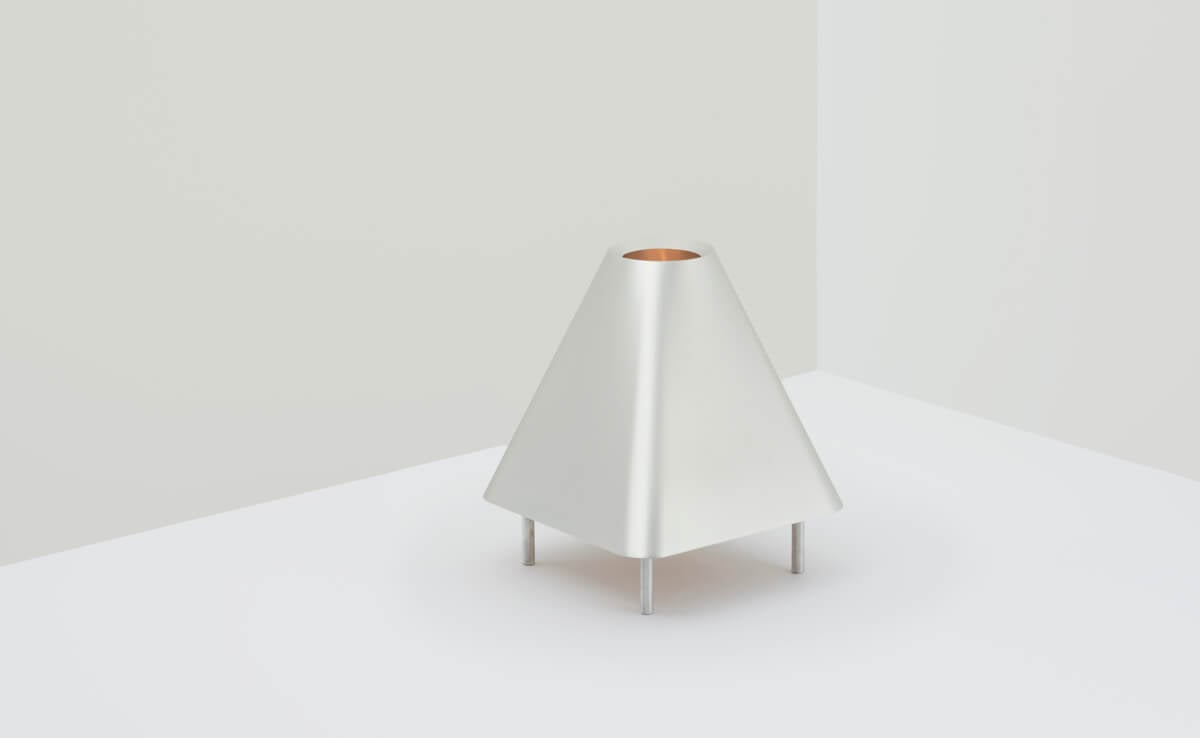 Thom Fougere‘s striking luminaire calls to mind a scale model of a retro-futurist space ship. With Le Feau, the Manitoba designer and former EQ3 creative director has transformed the qualities of an illuminated cabin in the woods into a pyramidal light diffuser. 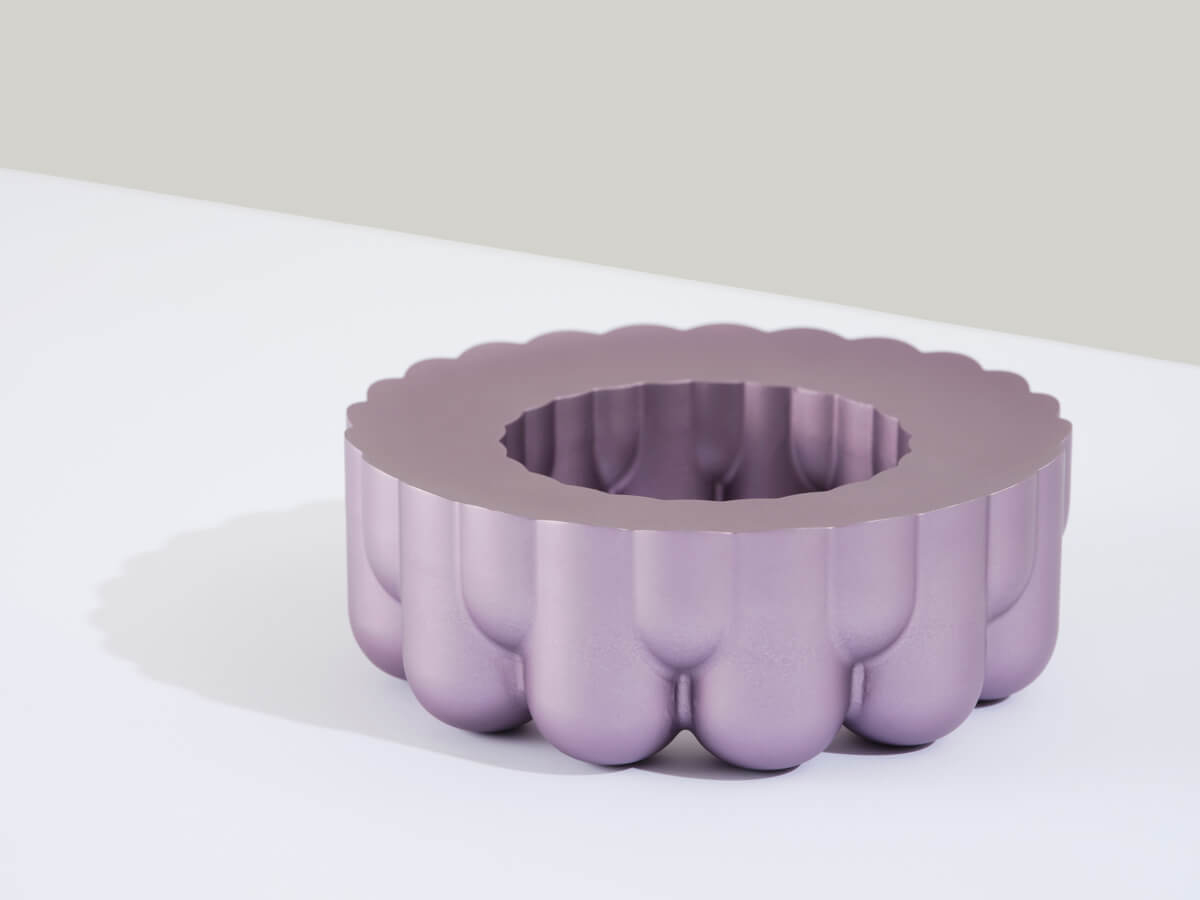 Resembling a high-resolution rendering, the CNC-milled mauve Blobs by Chifen Cheng address the ever-present role the digital world plays in our daily lives. The London-based designer conceived the vessel as a “defensive architecture” for one’s ID, iPhone and other devices so intimately interwoven with our IRL and URL identities. 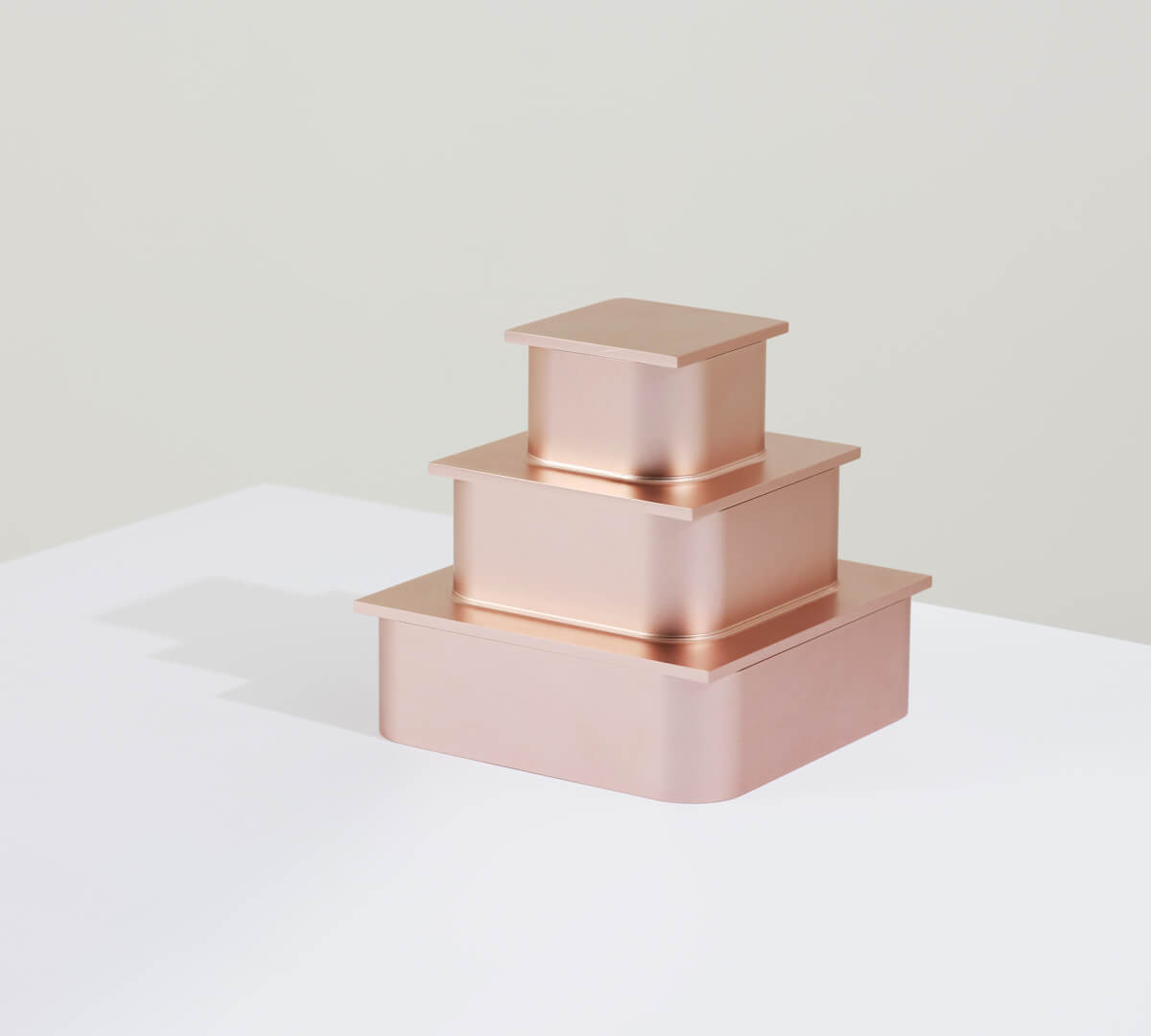 In addition to co-organizing the event, Jessica Nakanishi and Jonathan Sabine of local studio MSDS unveiled three new products at the exhibition – Folding Table, Bartleby Container and Ziggurat. The last, a stacked, peach-tone vessel, recalls the similarly stepped shape of Mesopotamia’s monumental structures and can be separated into three individual containers. 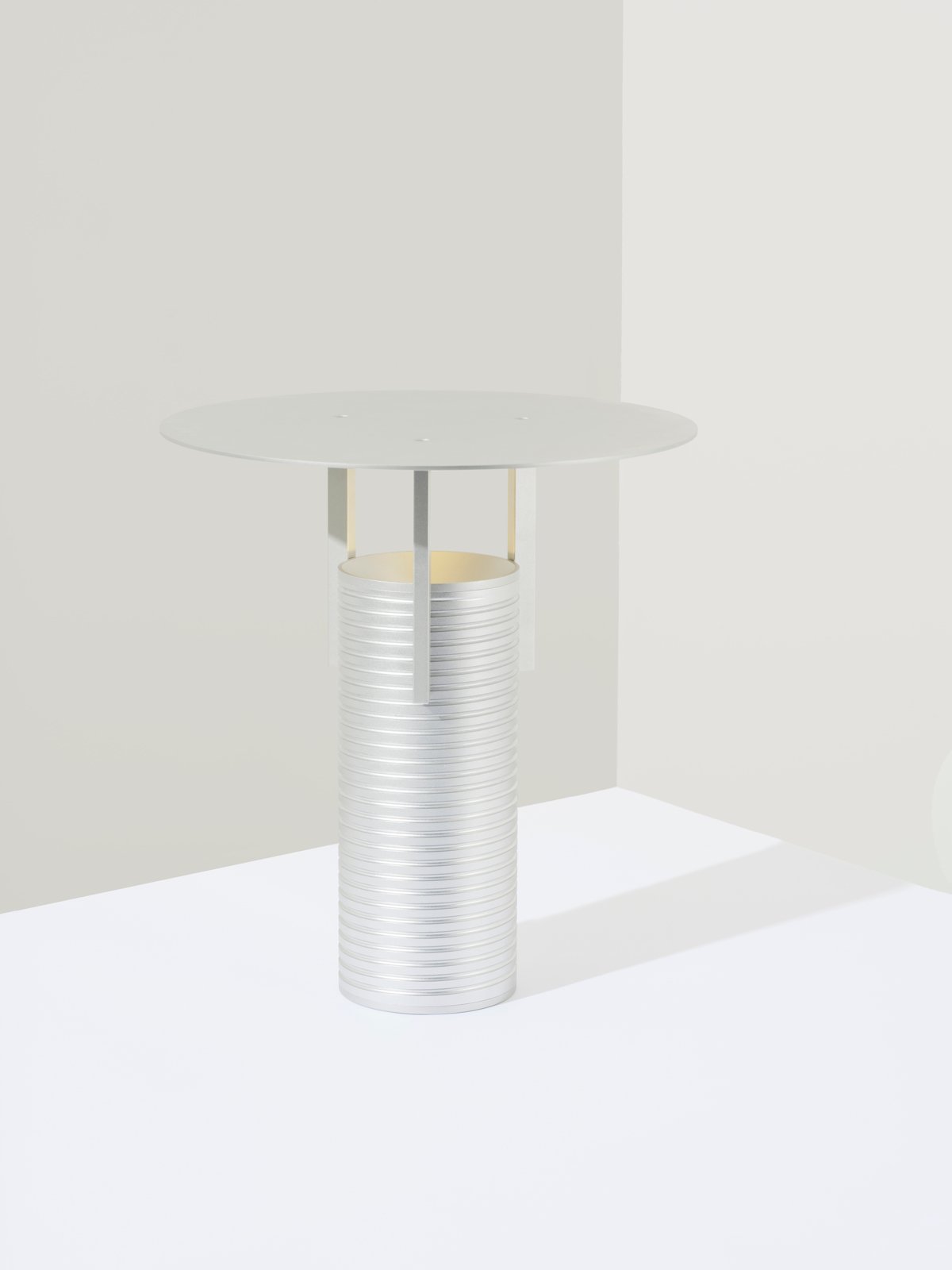 While also co-organizing the event, Jamie Wolfond (of Good Thing fame) launched his latest prototype: Thread Lamp. It features a conical, ribbed base (reminiscent of a grain silo) and satellite-shaped lid supported by three legs. Playfully spinning the top clockwise or counter-clockwise closes or opens the fixture, which radiates a warm glow at each interval.

A recent exhibition in Toronto convened 15 emerging and established designers to test the limits of the ubiquitous material.