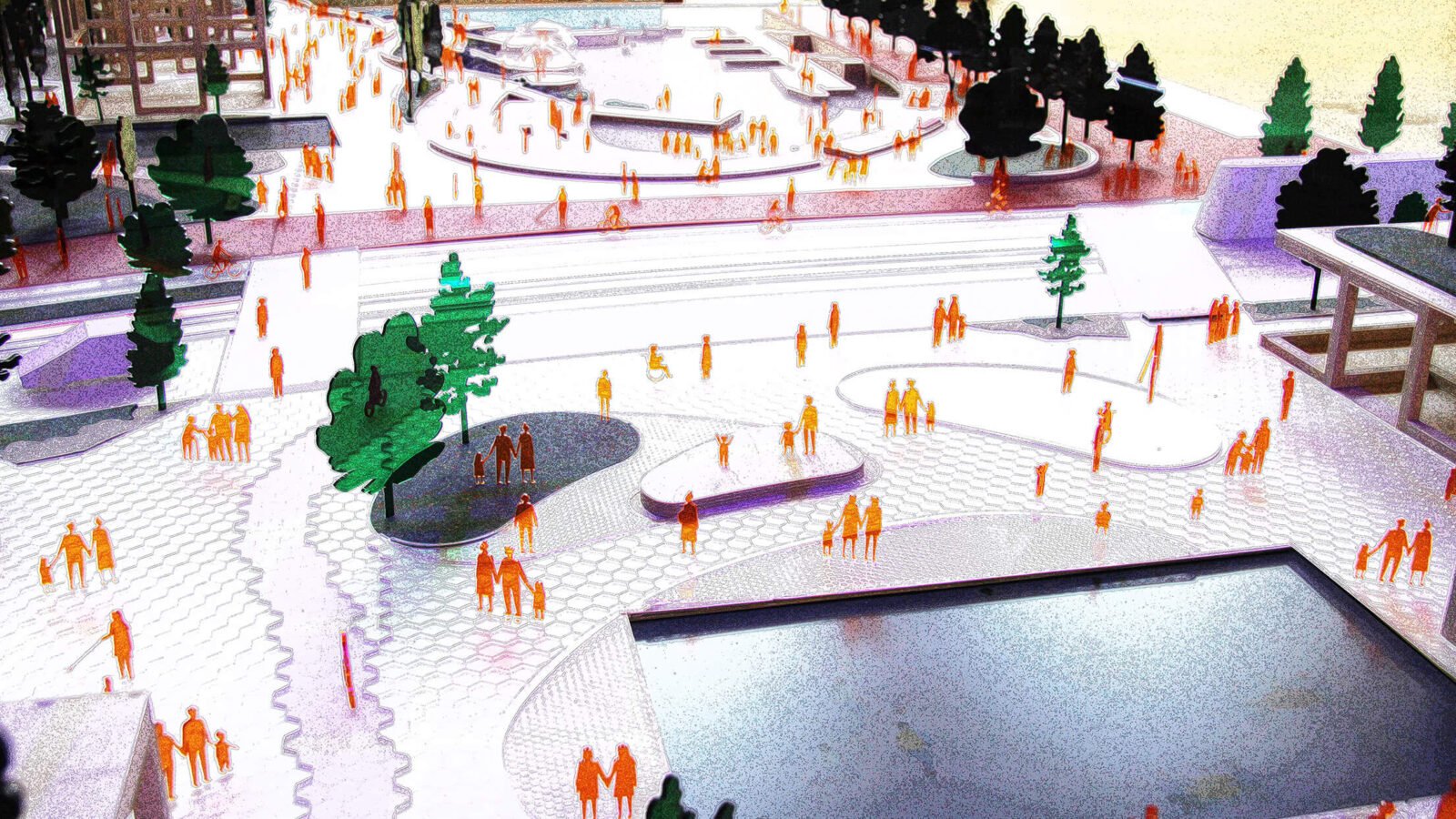 From tall-wood towers to re-imagined streets, Sidewalk proposes many big ideas. Maybe too many.

June 2019: the Alphabet-owned, Google-affiliated firm that responded to an international request for proposals for an “Innovation and Funding Partner” to develop Quayside, a five-hectare elbow of land in a much larger parcel of the public-owned Port Lands, releases its proposal. The RFP required respondents to describe their “ability and readiness to take the concepts and solutions deployed on Quayside to scale in future phases of waterfront revitalization.”

After months of controversy surrounding the proposed development’s scope as well as its privacy and governance implications, Sidewalk has laid out its ambitions – and, yes, its lens captures a vision that includes future development phases beyond Quayside. Together, they comprise what Sidewalk has termed the Innovative Development and Economic Acceleration (or IDEA) District: 77 hectares that would also include an innovation hub on Villiers Island, complete with a Google headquarters.

Let’s start with some praise: Sidewalk Toronto’s proposal is a welcome compendium of enlightened design thinking today, presenting a wealth of core design ideas that read like genius solutions and no-brainers all at once. Reading through Volume 2 of the MIDP, I often found myself asking, Why aren’t we already doing this?

At 307 Lake Shore Boulevard East, Sidewalk’s Quayside hub, those ideas find form in a physical model: a mock-up of the Quayside site abounding with wood mid-rises. The model’s buildings are skeletal and meant only to convey that mass timber is the main building block of this potential development. But in the MIDP, Michael Green Architecture, Snøhetta and Heatherwick Studio have visualized voluptuous renderings of a Parliament Plaza (the central gathering node) where tall wood performs feats – forming fan-like balconies, creating a giant swooping hull – we’ve never seen the material achieve.

Sidewalk’s ambition to build exclusively with wood, including the realization of the world’s first 30-storey mass-timber tower, dovetails with another ambition: to establish an Ontario-based nexus for the production of cross-laminated-timber structural panels and glulam beams. The economic benefits would include an estimated 2,500 jobs created over 20 years and the reduction of project timelines by a third. Ontario would become a leader in tall timber. As Jesse Shapins, Sidewalk Toronto’s director of public realm, explains, “this is really about how you build that whole ecosystem locally. A couple of smaller factories and the carpenters’ union here are incredibly excited about the next generation of jobs.” 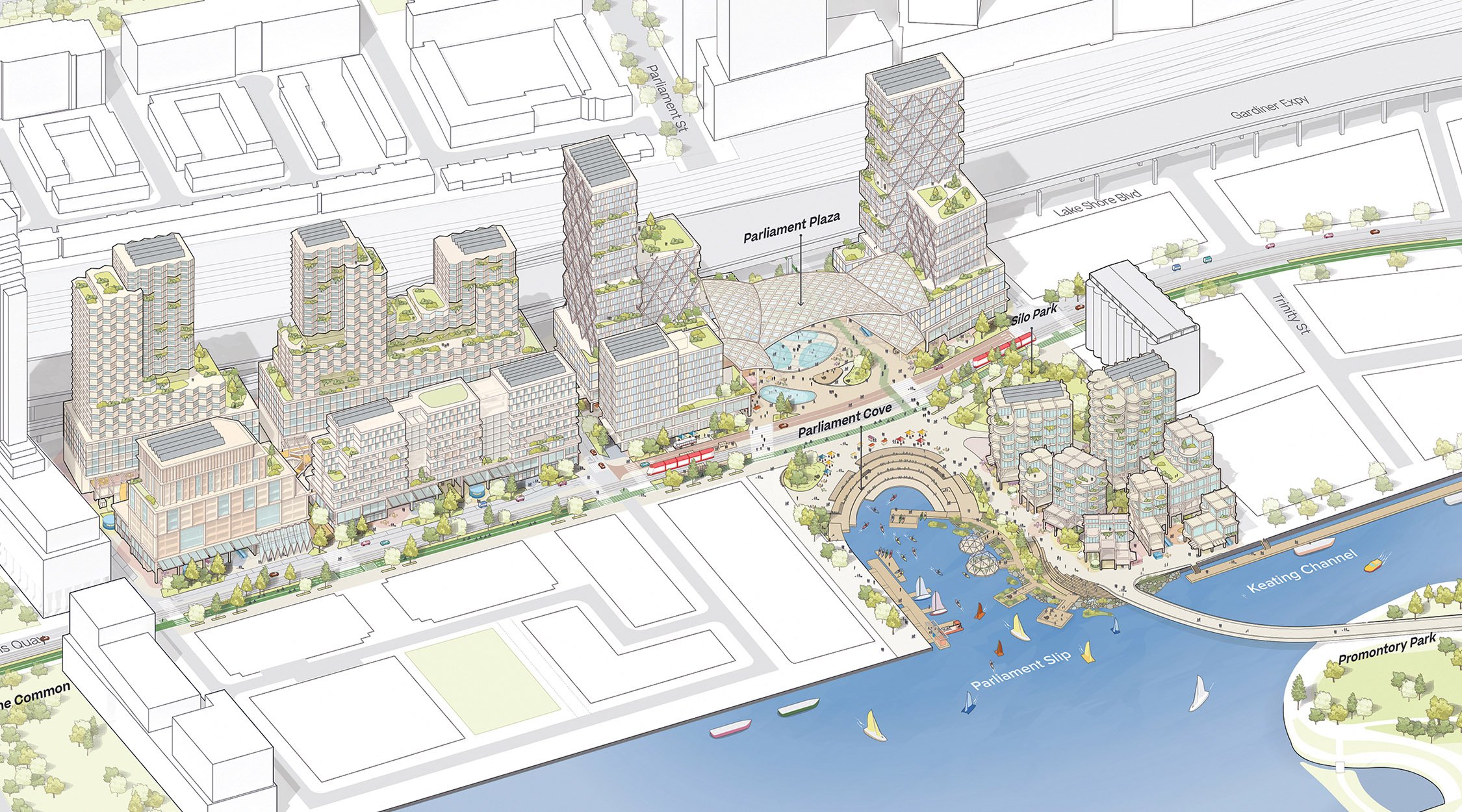 It’s impossible to talk about the design aspects of Sidewalk Labs without discussing the concurrent economic and social possibilities. Quayside would be mostly residential, combining condos and purpose-built rental. And it’s pretty cool that the units are designed as multi-purpose “lofts” with movable walls that allow spaces to be expanded as required and also for the buildings themselves to evolve into new uses over time. But while Sidewalk aims to invest $77 million in affordable housing, only half of what it deems “affordable” meets the city’s definition. And let’s not even wade into the novel financing models, such as shared equity.

The interconnectedness of the built realm with these other types of innovation – new technologies as well as financing and governance models – is embedded, most controversially, into the public realm. The guiding principle here is ultimate flexibility. There are transformative ground levels called “stoa” (after the ancient Greek markets) where businesses can co-tenant a retail or culinary space, plus multi- program barges off Parliament Slip for restaurants, ecology research field stations and aquaponics systems. Everything down to the smallest details – including the modular hexagonal pavement, outdoor comfort shelters and dynamic curbs – would require new coordination tools, from purpose-built apps and an “urban USB” (or Koala mount) that would provide outdoor spaces with rapid-fire Wi-Fi to a proposed Open Space Alliance for operating, maintaining and programming those spaces.

When it comes to the transportation plan, Sidewalk proposes four different types of streets: boulevards and transitways for cars (and future autonomous vehicles) and the (still theoretical) eastern Light Rapid Transit extension as well as accessways and laneways favouring bikes and pedestrians. What happens beneath these streets is just as important. To limit the number of traffic-clogging delivery vehicles, Sidewalk proposes an underground freight delivery system and neighbourhood logistics hub (or urban consolidation centre) where everything from incoming packages to waste is sorted and dealt with by robots and other nascent technologies. The buildings would be connected by an intricate tunnel system and, of course, a new entity to coordinate the entire system.

The Quayside model at 307 is lit up with pulsating beams that communicate the mechanisms at the heart of this future all-electric neighbourhood, perfectly calibrated and replicable. It’s difficult to imagine people living here, as if living in an experiment. The best kinds of urban experiments have historically sprung up, Jane Jacobs–style, from the grassroots – the abandoned warehouses turned into art studios, the patch of lawn cultivated into a communal vegetable garden. Sidewalk Toronto borrows from these precedents and is attempting, in its own way, to provide multiple stages for this kind of street ballet. It would be silly to expect a tabula-rasa master plan such as Sidewalk Toronto’s to achieve the messy urbanism that can only be choreographed by individuals adapting to gritty conditions. But that one developer could ideate so much space, dotting every i and crossing every t, feels at odds with the dynamism that the proposal works so hard to sell.

From tall-wood towers to re-imagined streets, Sidewalk proposes many big ideas. Maybe too many.