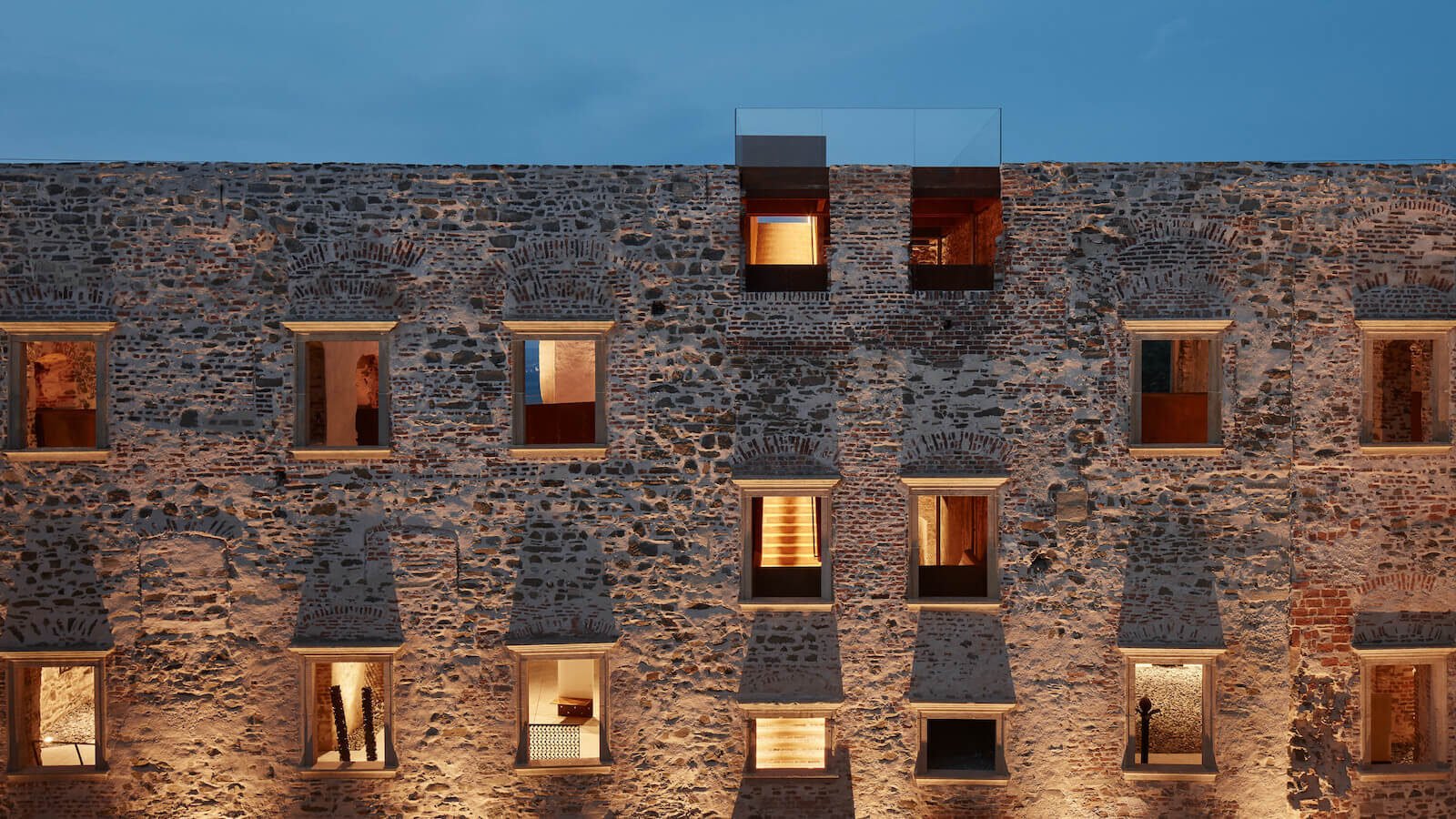 Atelier-r Animates the Ruins of a Czech Castle

The Moravian fortress of Helfštýn has been re-opened to visitors following a bold yet deferential intervention.

By the 17th century, it was an almost impregnable fortress. Already a historic complex dating to the 1300s, the imposing Helfštýn was gradually expanded to become one of the largest strongholds in a land of castles, asserting its dominance on a hillside above the Moravian Gate Valley. By the 18th century, however, it was abandoned, with the crumbling keep surrendered to centuries of looting and decay before re-emerging as a tourist destination in the 20th century. By 2014, the condition of the ruins was so degraded that the site was deemed unsafe and closed to visitors. By 2020, it was all but reborn.

Following a thoughtful intervention by local designers atelier-r, the Czech stronghold has been revived and recently re-opened. It was no ordinary restoration project. With the castle’s crumbling state considered a key element of its cultural heritage, the architects were tasked with ensuring safe, hospitable conditions while maintaining the fortresses’ existing form and leaving the overall structure in a state of artful ruin. 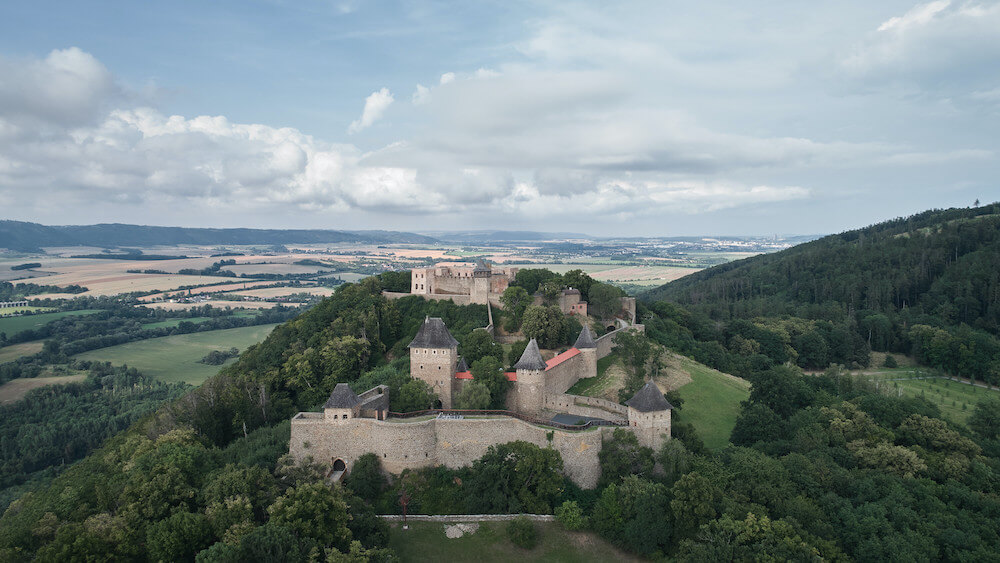 It started with a drone. After an in-depth survey of the site, atelier-r created a highly-detailed 3D model of Helfštýn used to guide the scale of the overall intervention. The brief allowed for a new roof and walkway through part of the complex, but the additions had to be tucked within the historic footprint to preserve sight-lines of the castle. 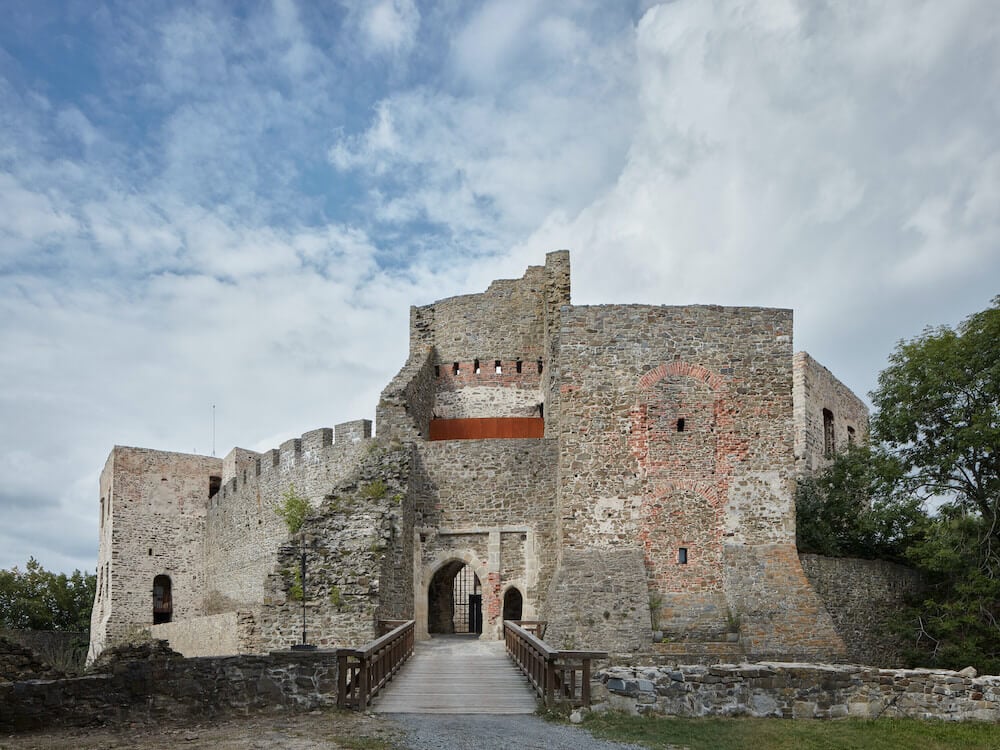 Working within these challenging constraints, the architects made a virtue of their limitations, introducing a bold yet contextually rooted new visual language. A pair of sinuous walkways in polished concrete and corten steel weave an elegant path through the castle, topped by a light glass roof. The three materials — concrete, corten steel and glass — also delineate the trio of distinct spatial experiences throughout. 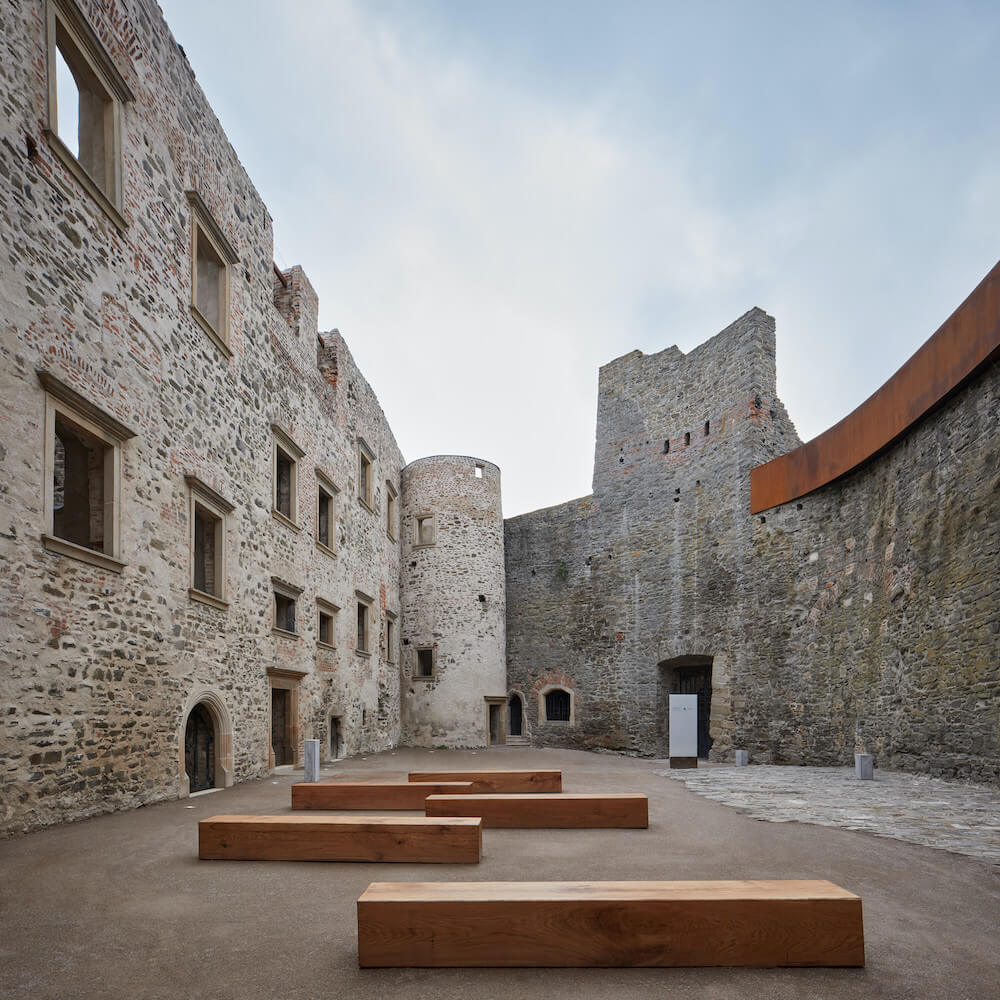 On the ground floor, an understated concrete walkway snakes a new path through the base of the castle. Accented only by its sharp geometry, the pared down path calls attention to the form of Helfštýn’s massive stone walls with angles that mirror the historic masonry. Framed in rough gravel — which gently deters visitors from approaching the walls — the sleekness of polished concrete accentuates the rich textures around it. 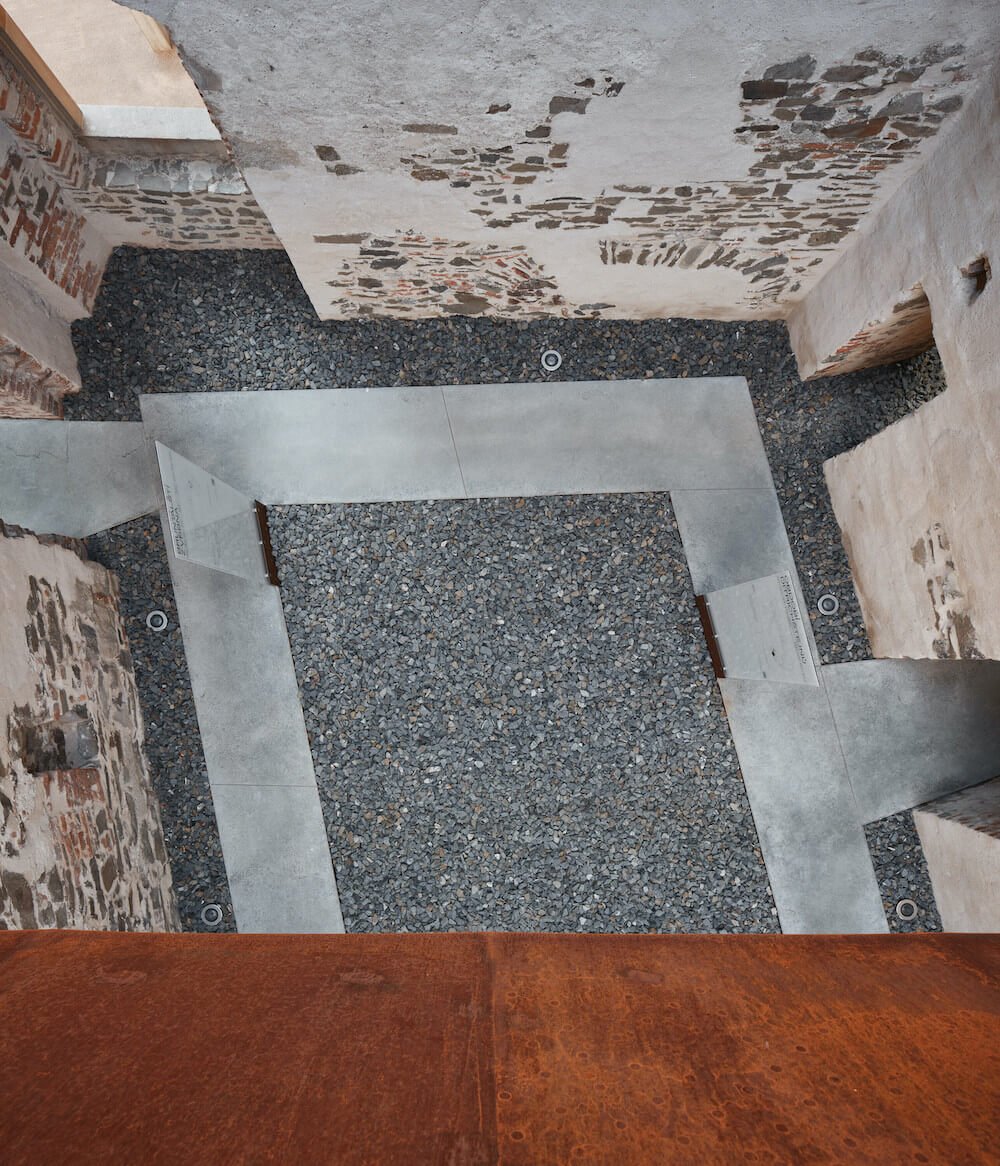 Upstairs, the weathered quality of corten steel creates another dialogue with Helfštýn’s rugged stone walls. While the polished concrete base almost disappears into its surroundings, the upper walkways are a more assertive intervention. But the clear demarcation between old and new only accentuates the experience of history, allowing the castle ruins to stand out against the steel as visitors gradually ascend the fortress. 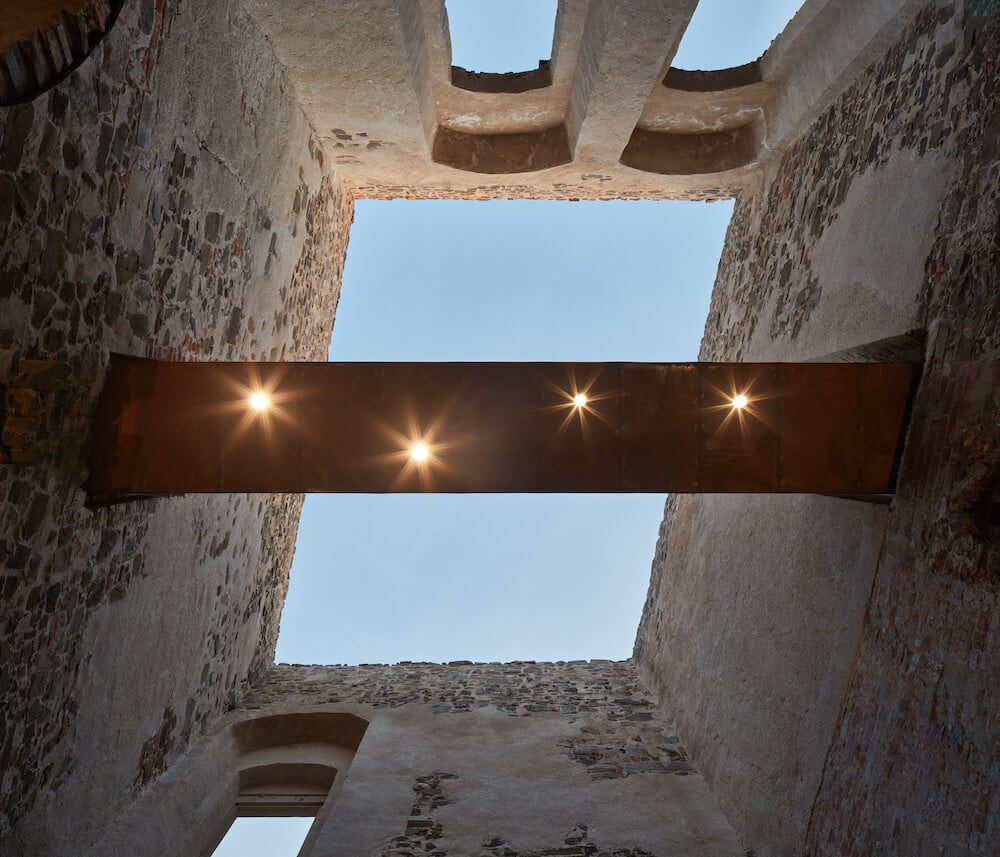 A deft lighting program adds warmth throughout the journey. Inside the castle, soft lights paint the walls in chiaroscuro, while the upper walkways are pleasantly illuminated beneath the handrails, adding another layer of texture and depth. 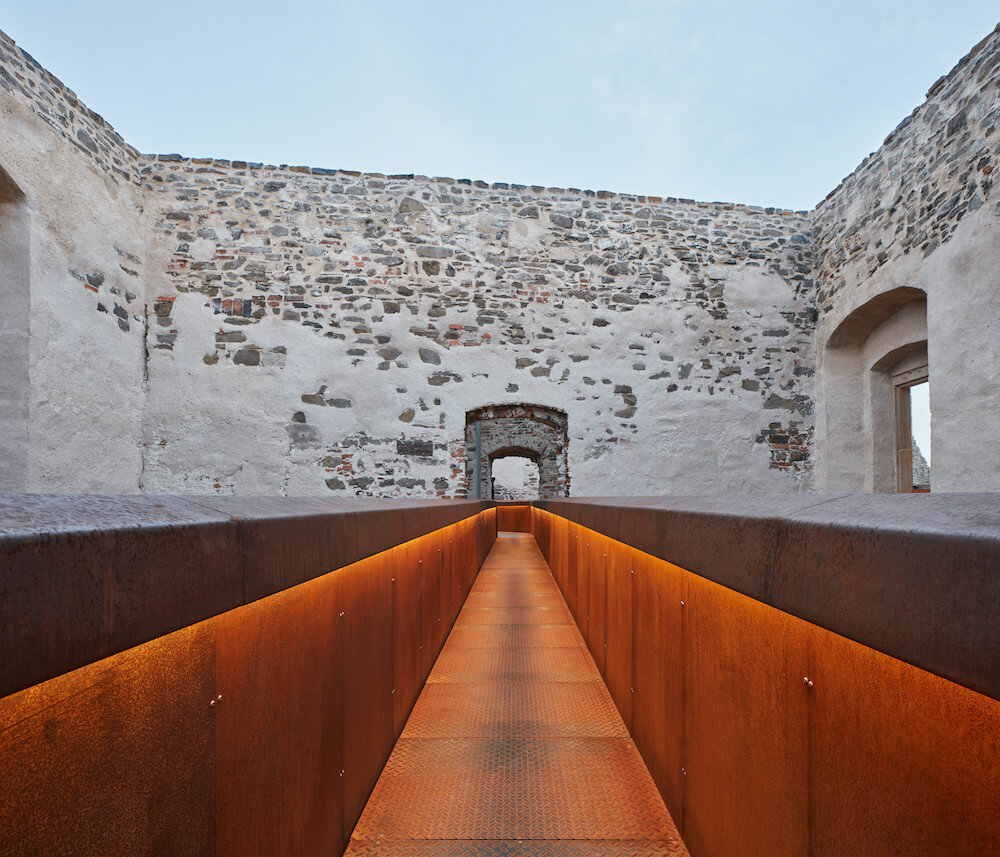 It all culminates in a hell of a view. Climbing above the simple glass roof that strategically covers parts of the complex — never extending above the castle walls — visitors are treated to a panorama of the Moravian landscape. It’s a fitting capstone to a skilled intervention that’s deferential, bold and welcoming all at once. In a stronghold built to keep invaders out, that is no small feat. 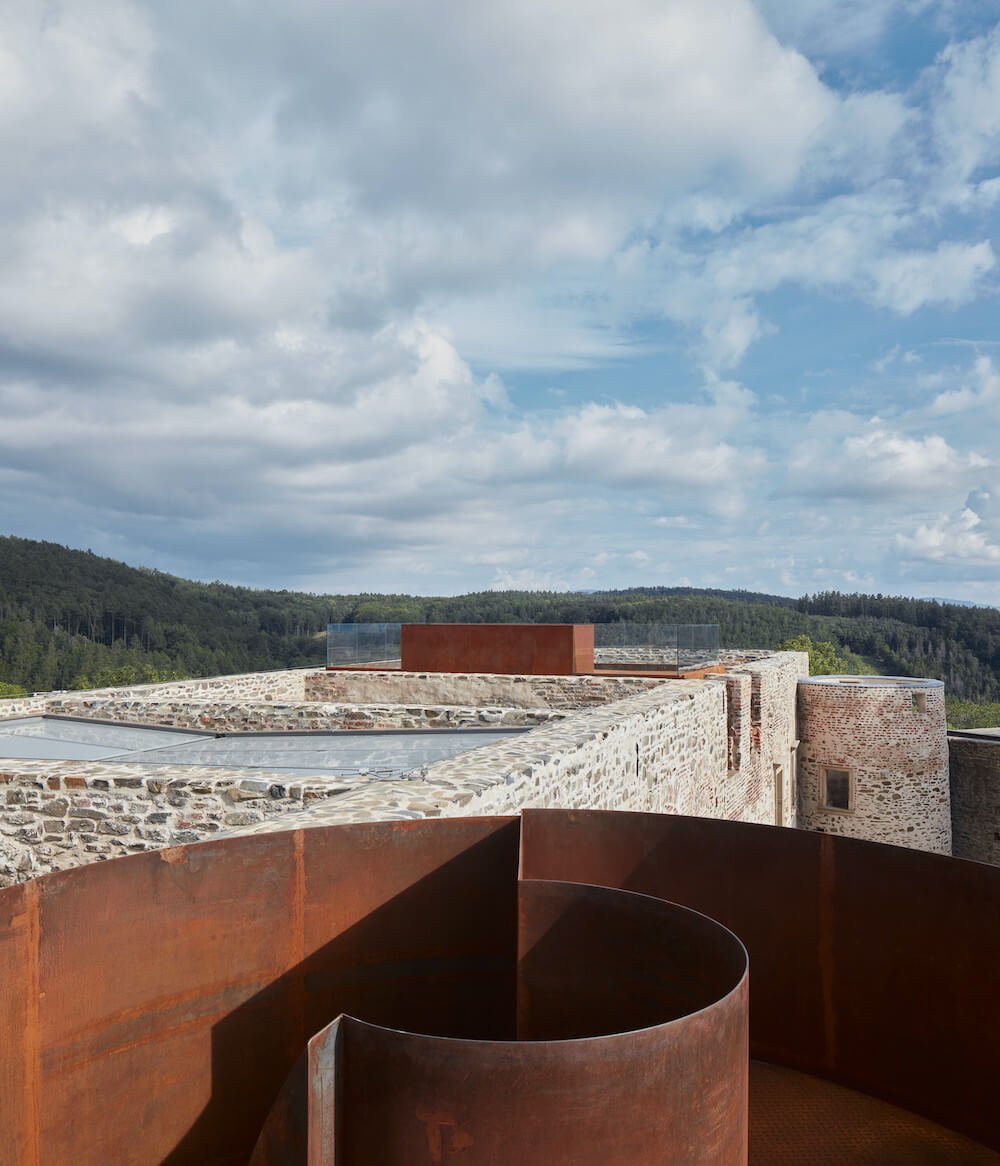 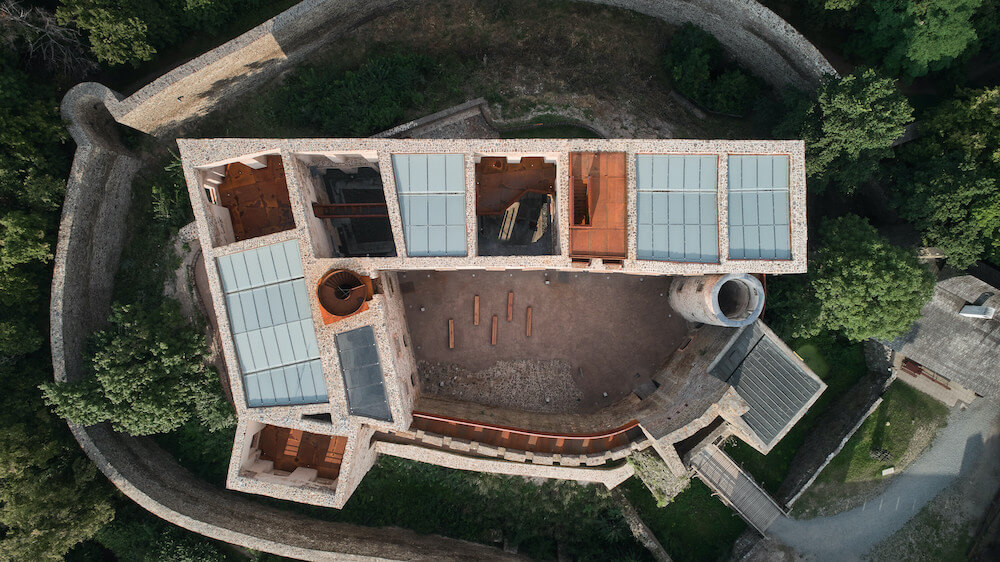 The Moravian fortress of Helfštýn has been re-opened to visitors following a bold yet deferential intervention.