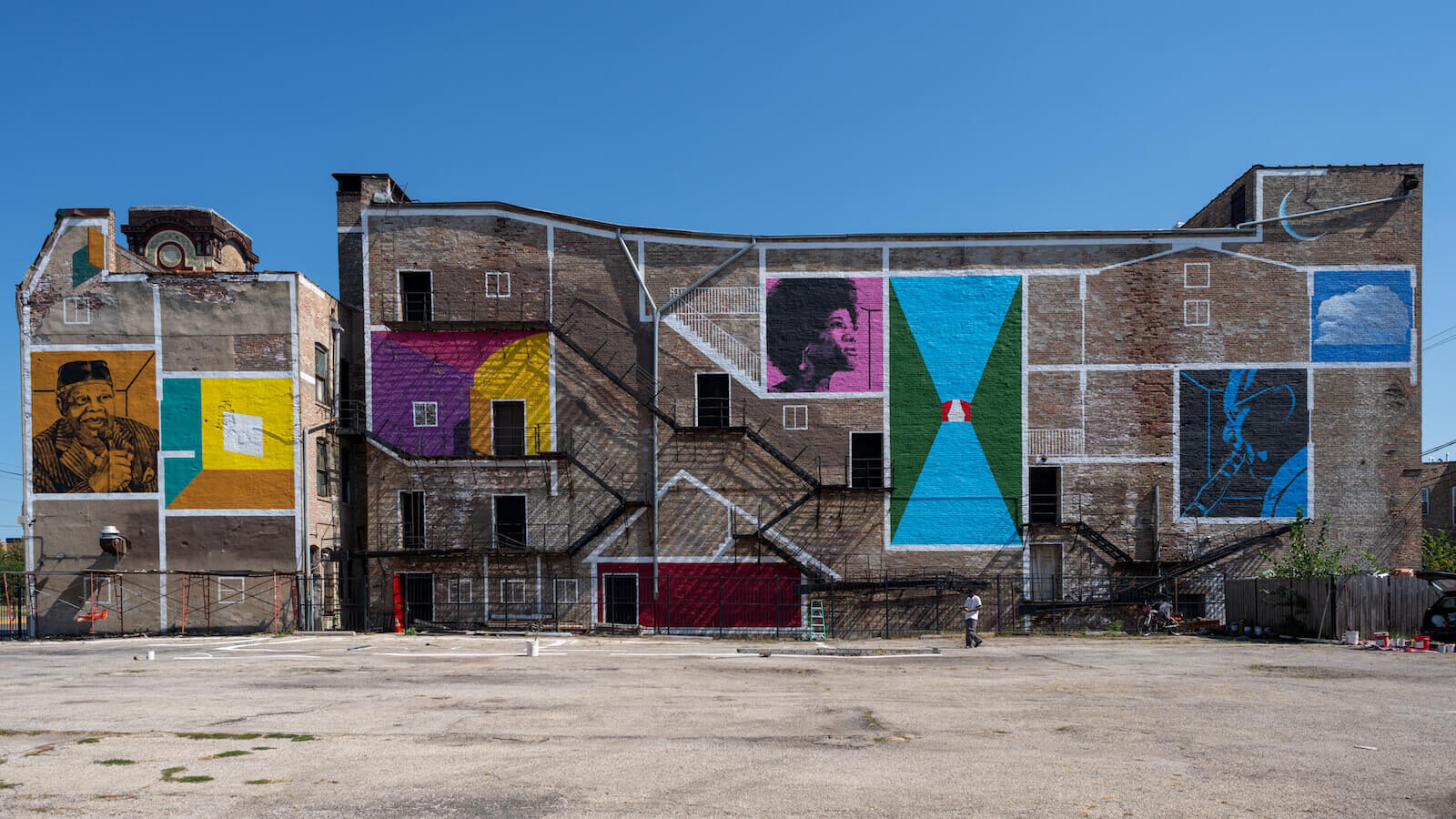 Chicago Architecture Biennial: A Meaningful (and Colourful) Engagement with the City

It’s amazing what community collaboration – and lots of vibrant paint – can do! On until December 17, the Chicago Architecture Biennial brings bold new installations to the city’s public spaces.

Biennials have a notoriously hard time connecting with members of the general public. Their high-minded exhibitions on the state of architecture and design, held in museums, galleries and purpose-built pavilions, often fall short of engaging non-professionals. It’s something that events around the world have struggled with for some time: If urbanism, architecture and design create the physical world we all inhabit, why are so few of us interested in exploring the big ideas emerging in those areas? Perhaps because the medium is the message – and in years past, biennials have often felt hidden from view, overly esoteric and concerned with self-congratulation.

Turning this dynamic on its head, the Chicago Architecture Biennial, now in its fourth edition, opened last week with a program that is not only woven directly into the city’s open spaces but was created by architects working in collaboration with mission-driven community groups. The result is a vibrant – meaning: vividly colourful, graphic and bold – network of outdoor spaces that help us to reimagine the possibilities of urban life. 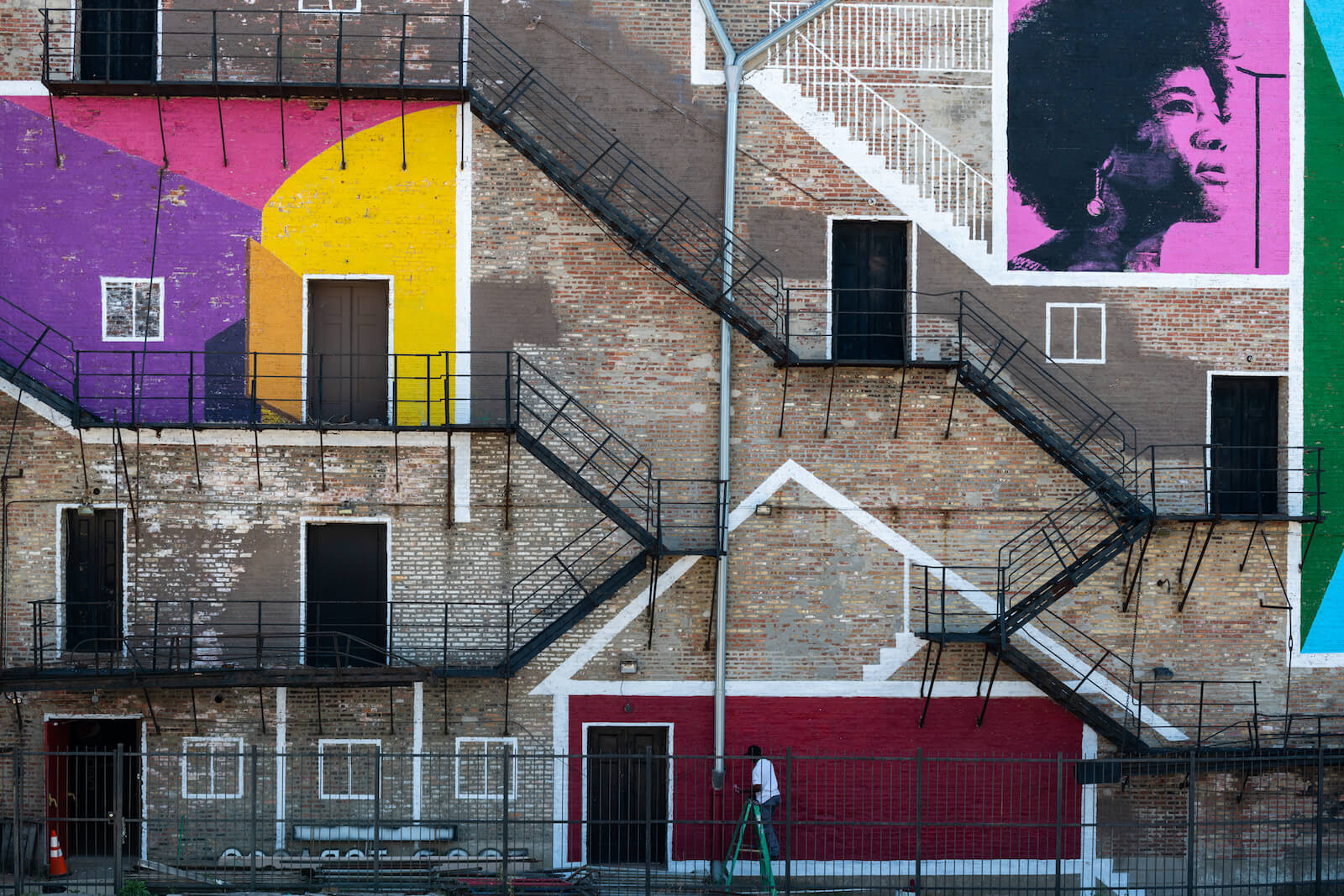 Swiss architect Manuel Herz worked with the Central Park Theater Restoration Committee to transform a historic site into a palimpsest of its past and present. Photo by Nathan Keay

Led by artistic director David Brown, The Available City transforms empty blocks into playgrounds, materials labs and places to ponder the collective memory of a community. The organizing team had a lot to work with: There are apparently over 10,000 city-owned vacant lots on the South and West Sides of Chicago in predominantly Black and Brown neighbourhoods, and they took on 18 of them with site-specific installations by 80 contributors from more than 18 countries.

And the term “site-specific” could not be more apt. One of the sites is North Lawndale, a low-income neighbourhood on Chicago’s West Side that was initially populated by Jewish immigrants from Eastern Europe and Russia and is today home to mostly Black residents. Those cultural characteristics, past and present, are explored in various ways. Working with the Westside Association for Community Action, Open Architecture Chicago and Freedom House Studios, the architects of Studio Barnes, Shawhin Roudbari and MAS Context designed Block Party, a climbable play structure. Painted pink like the train line that runs above, it was inspired by the blow-up bounce houses of annual block parties on Chicago’s West and South Sides. 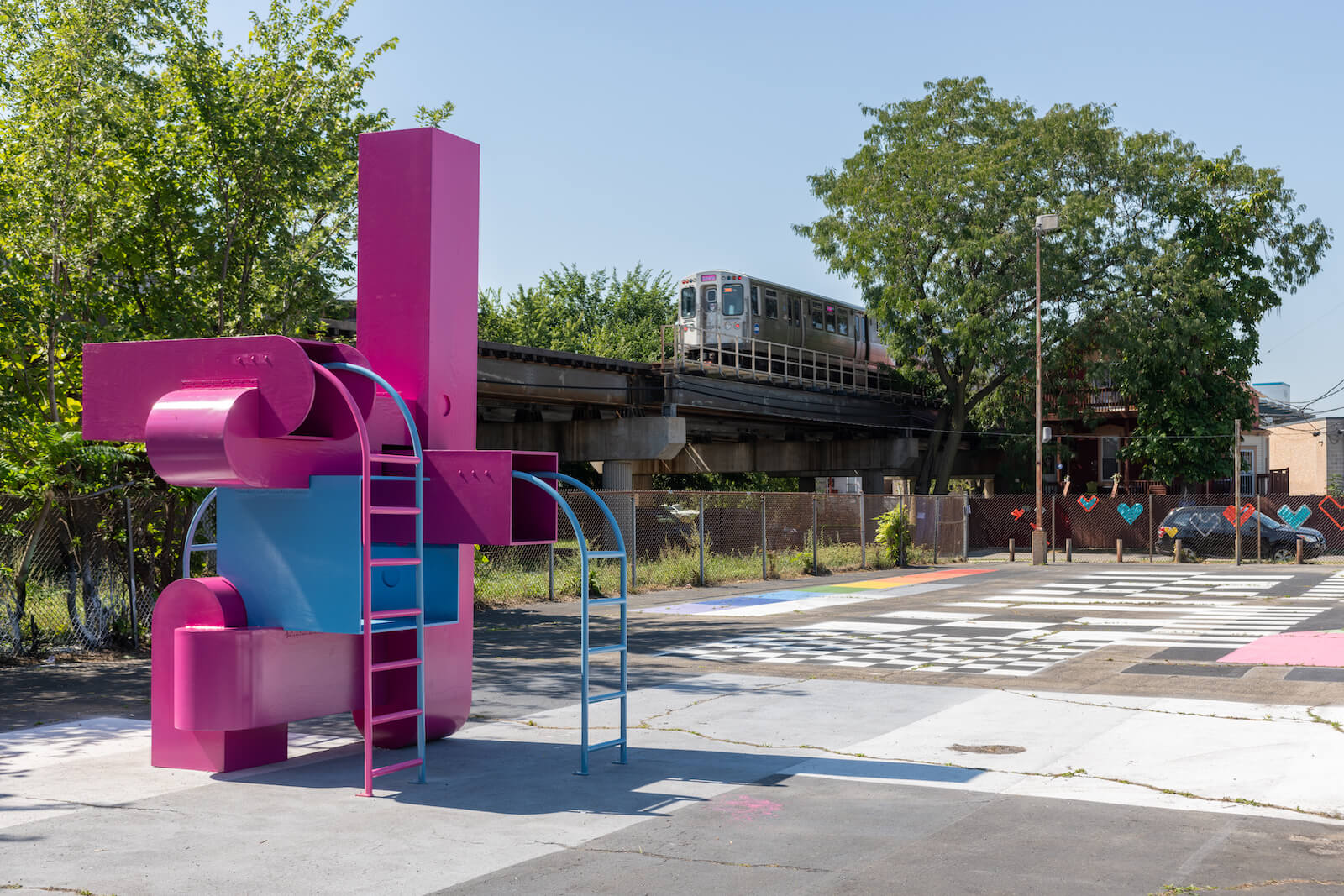 Block Party in Bell Park includes “modular blocks that can be made, unmade, moved, and reconfigured by the community for different purposes and needs, and will be stored away when the space is not being actively programmed.” Photo by Nathan Keay

On the same site of Bell Park, Outpost Office of Columbus, Ohio, has transformed the ground with an “architectural-scale urban painting” that was made by GPS-guided robots – the kind usually employed to sketch temporary sports fields. “Through the simple act of line making,” the curators explain by way of the press release, “the painting transforms vacant territory into landscapes for civic gatherings.” This new surface might urge people to explore how to activate the space. 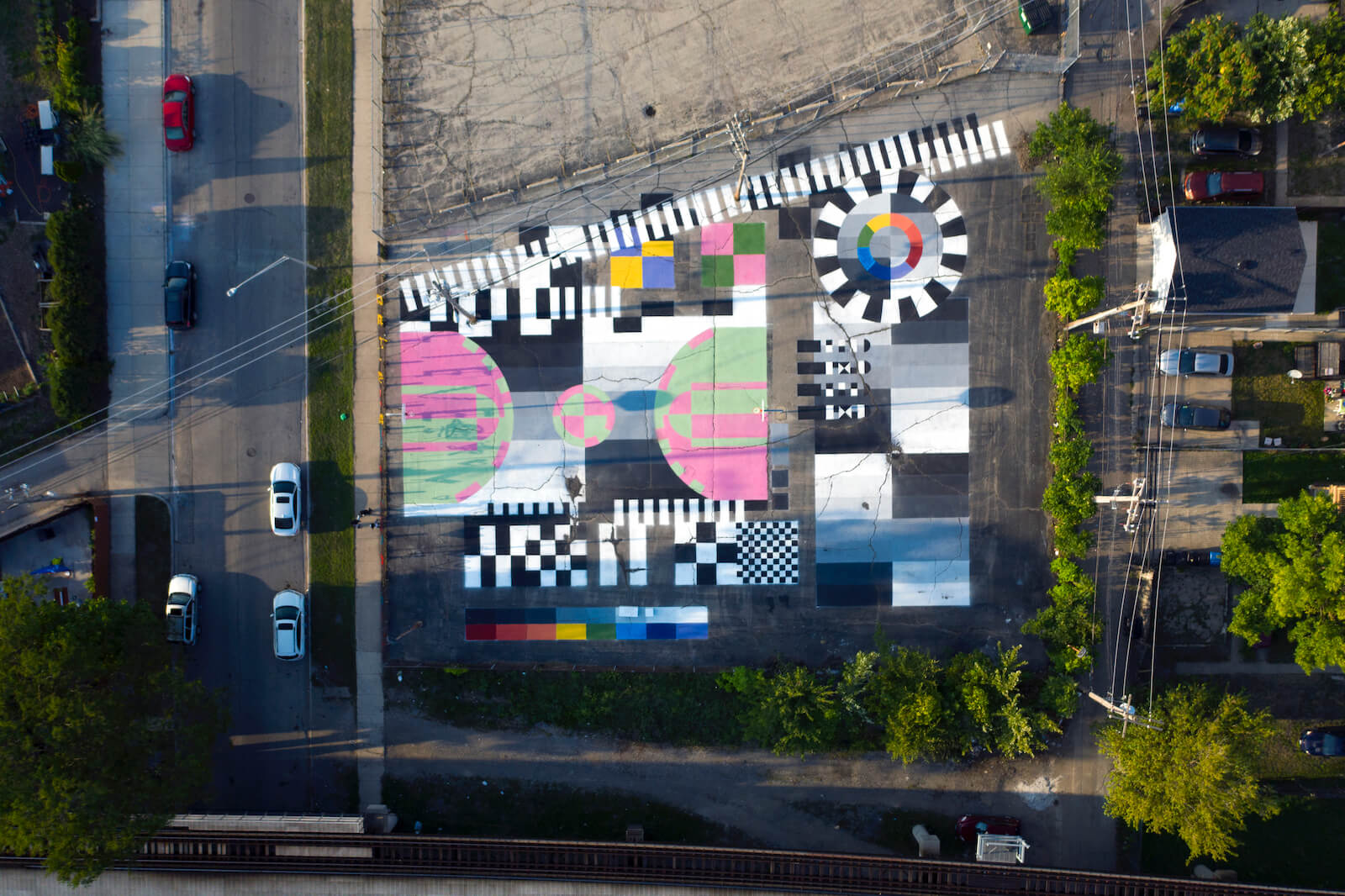 Called Cover the Grid, Outpost Office’s installation is designed “to bring vibrancy to the space without any associated material waste or demolition costs.” Photo by Dennis Fisher

Also in North Lawndale, the Swiss architect Manuel Herz has used paint to animate Central Park Theater, a significant cultural hub where jazz giant — and King of Swing — Benny Goodman once performed and which was saved and restored just last year by a community church as its new place of worship. On the facade, Herz and his community partners made massive portraits of musicians that recall the building’s glory days; and on its parking lot, they recreated the outlines of apartments in neighbouring residential buildings that didn’t survive into the present. Furniture installations on these floorplans will allow visitors “to reimagine living in the North Lawndale of decades’ past, and to create new futures.” 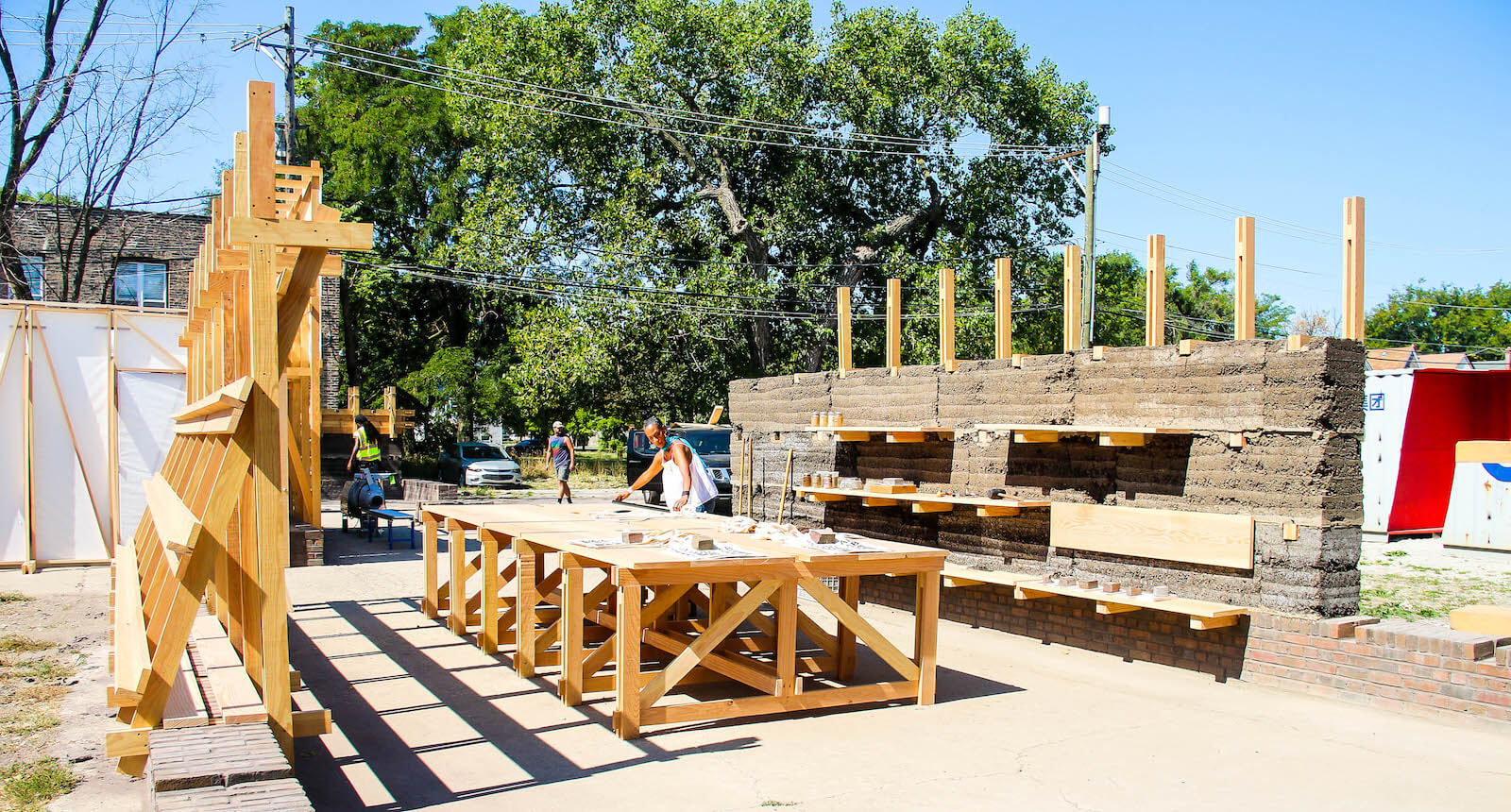 Supported by the Danish Arts Foundation, Soil Lab was inspired by Danish expat Jens Jensen, who founded a school of the soil in Wisconsin. Photo by Caliph Rasul

Then there’s The Soil Lab project, by the Danish-Irish quartet of James Albert Martin, Eibhlín Ní Chathasaigh, Anne Dorthe Vester and Maria Bruun, which speaks more to building a future than honouring the past, though it does draw from the vernacular of both Chicago and Denmark. Here, community members are invited to make structures out of bricks, rammed earth and ceramic tiles in a series of workshops. “The project creates a special meeting between architecture, object and the body as participants are invited to engage in the process of creating bricks, to slow down and consider the materiality of the spaces that we occupy,” the curators explain.

North Lawndale is just one community that the biennial touches – plus, there’s plenty of programming, both physical and digital, that builds on the theme that these installations embrace, with many related to new projects in the city, including Studio Gang’s gallery space in Wicker Park. Altogether, the Chicago Architecture Biennial appears to succeed in its goal of “illuminating the potential for immediate new possibilities, highlighting improvisational organizers of the city and underscoring the exponential impact of small elements in aggregate.”

It’s amazing what community collaboration – and lots of vibrant paint – can do! On until December 17, the Chicago Architecture Biennial brings bold new installations to the city’s public spaces.