Traditional Forms Inspired This Modern House in Slovenia
A house in Slovenia, by Dekleva Gregorič, brings the old-world charm of the hearth to a modern kitchen.

A house in Slovenia, by Dekleva Gregorič, brings the old-world charm of the hearth to a modern kitchen.

In a rural community near Slovenia’s capital, Ljubljana, where inland Europe descends toward the Mediterranean, there’s a 16th-century church with a steep, slender spire, and a gabled barn clad in dark wood. Situated between these structures, Chimney House nods to each. But in a clever bit of visual reduction, it takes only its silhouette from the familiar form of a pitched-roof house. 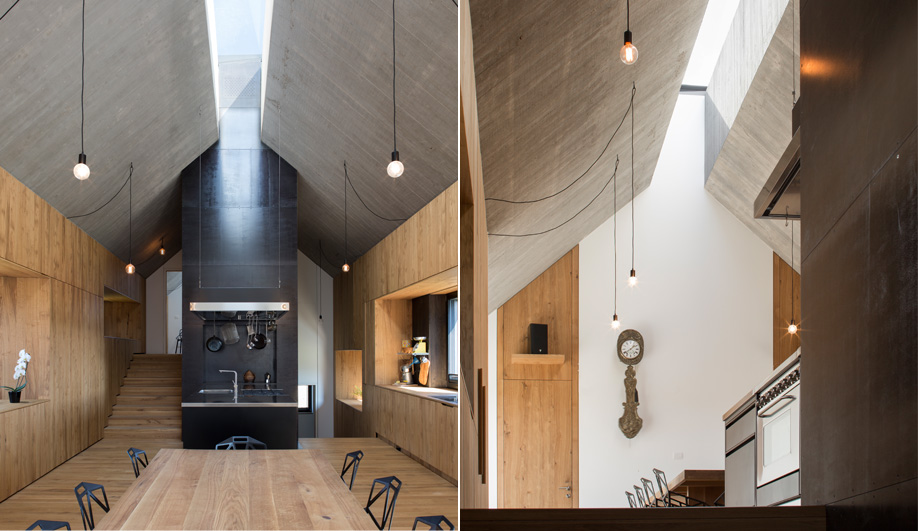 Architecture firm Dekleva Gregorič based the house’s form on the shape of an elongated chimney.

Architects Aljoša Dekleva and Tina Gregorič of local firm Dekleva Gregorič have taken the notion of the traditional chimney, present in the silhouette, and stretched it the length of the building, using the exaggerated size to accommodate a bank of skylights that draws natural light into the interior. Meanwhile, the entirety of the facade, including the roof, is covered in vertical larch boards – treated with dark oil, says Gregorič, “to obtain a patina matching the neighbouring barn.”

The facade is clad in oil-treated larch boards that match the rustic patina of a nearby barn.

Though the real chimney takes up a fraction of this windowed recess, it informs the overall concept of the house. In a concession to history, Dekleva and Gregorič placed a wood-fired stove at the home’s nucleus, where the owners cook and entertain, and like stoves of yore, it heats the entire house from the kitchen out. Encased in a vertical volume and faced with distinctive 4-millimetre-thick metal plates, it’s such a significant presence that it’s personified in the firm’s literature as “Stove.”

Along with supplying heat for the cookingelements, the wood-burning stove sterilizes the water and feeds the floor’s heating system.

Running up from the foundation and through the roof, the volume is plumbed, piped and ventilated, and draws everything else into its orbit. A wood-burning stove forms the organizational centre of the room and in this way, the architects have reinvented the “work triangle” and streamlined the hardest-working areas of the home.

This innovation frees up the rest of the space for living. Interior walls of oiled oak, rising up to a roof of reinforced concrete, are thick enough to integrate storage and deep, “inhabitable” window niches. Expanses of glass uninterrupted by mullions frame views to the village and countryside. In marking a transition between two places and two eras, Gregorič says, “the position of the house offered the opportunity to redefine the edge of the village.”