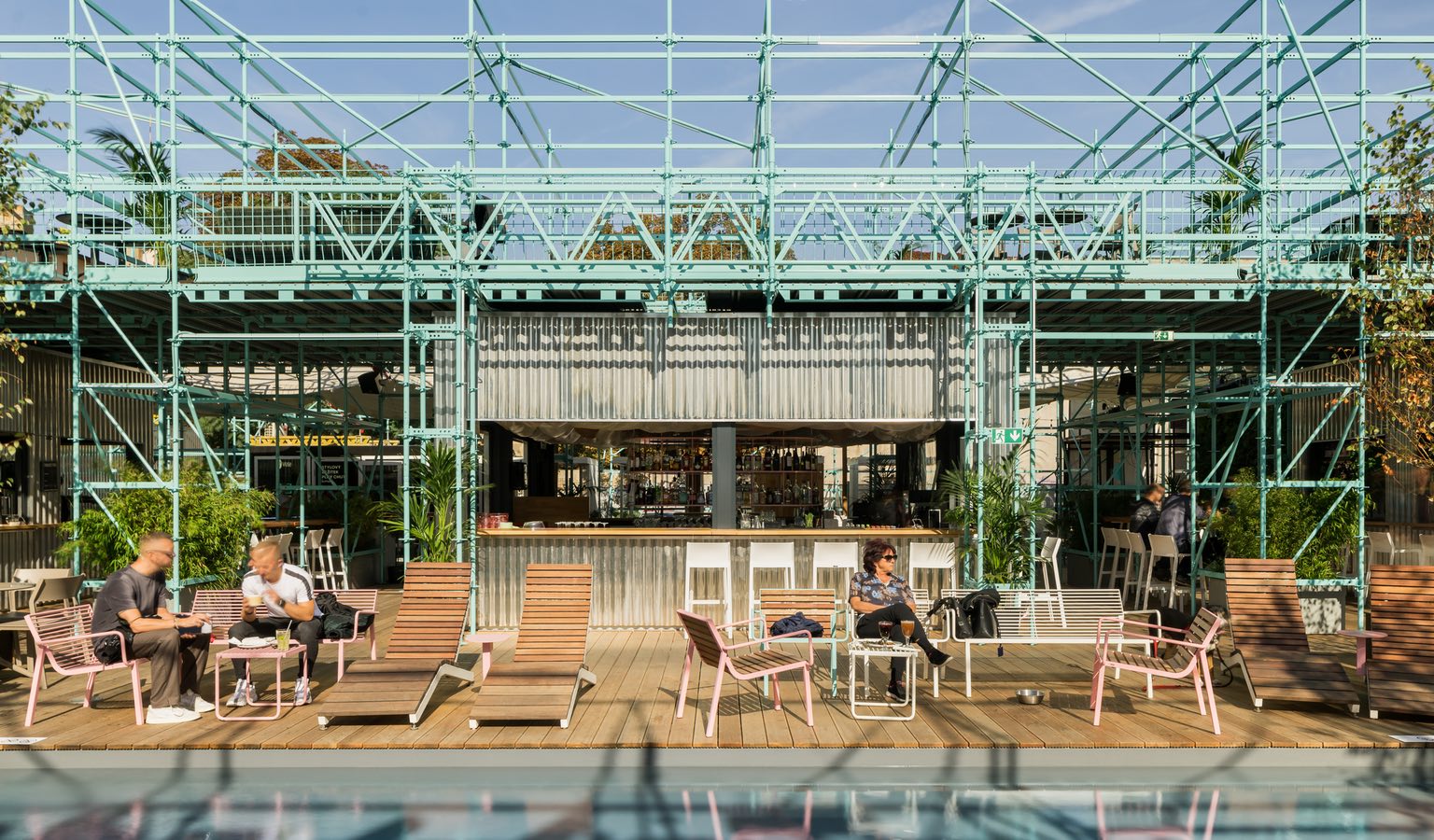 A Pop-Up Marketplace Energizes An Empty Corner of Prague

The real estate industry can be slow to patch the holes in a city’s urban fabric. Even when a plot of land holds great promise, formal developments can take years to get off the ground. Unfortunately, the longer an area sits empty, the more it can start to feel like a black hole, sucking energy away from the surrounding neighbourhood. Enter Manifesto Market, a Prague hospitality brand that quickly seizes upon the untapped potential of neglected street corners by transforming parking lots and brownfield sites into temporary food and drink hubs. 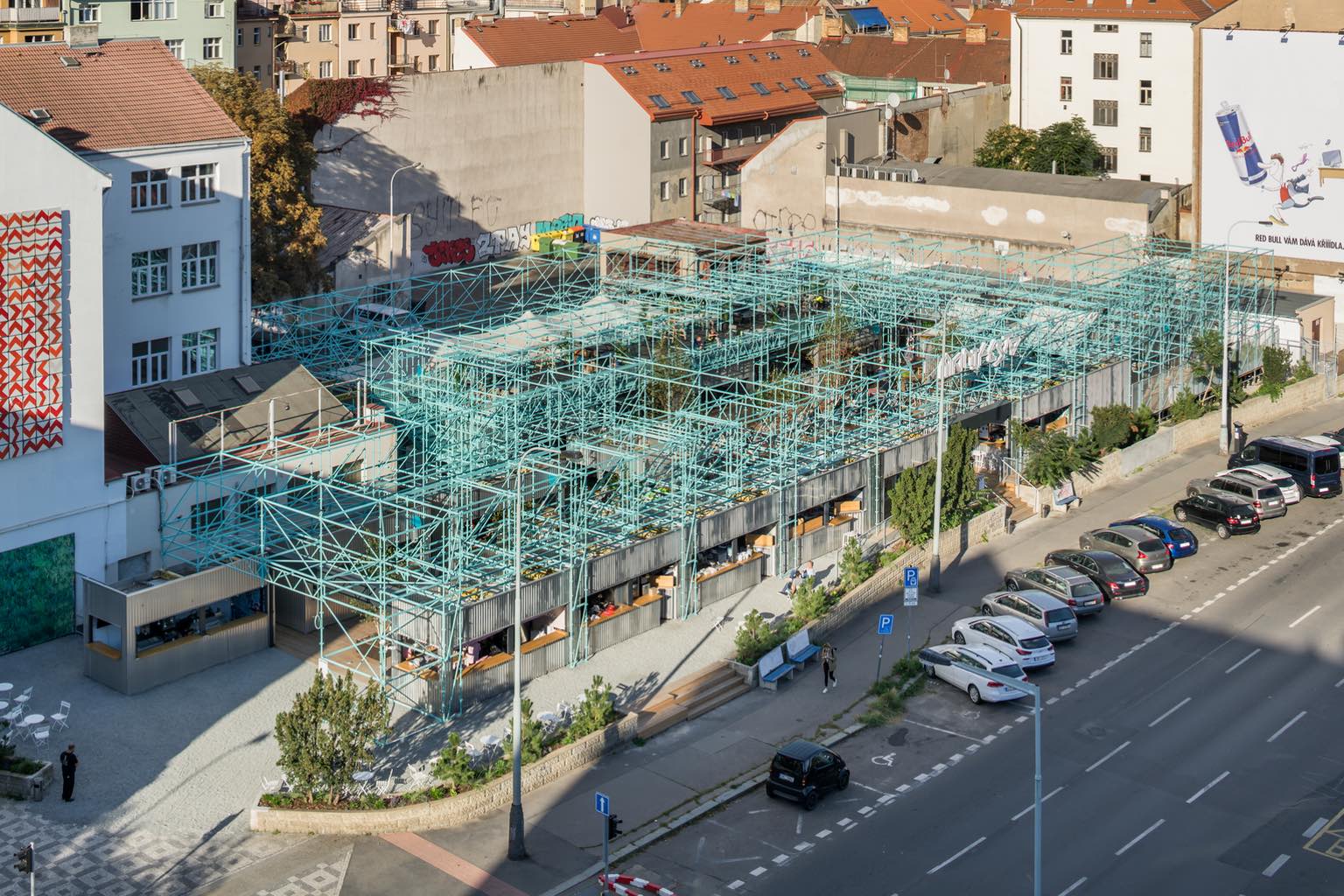 The company was founded by landscape architect Martin Barray, who is also the founder and chairman of urban design non-profit reSITE. For its first location, which operated in Prague’s Florenc district from 2018 through 2021 (and plans to reopen elsewhere later this year), Manifesto Market followed a common design formula by converting shipping containers into makeshift street food stalls.

For its second outpost in the city’s Smichov quarter, Manifesto upped the ante by tapping local architecture firm Chybik + Kristof, which developed a unique, flexible concept developed around the idea of “reversible design.” Constructed from basic building materials like corrugated aluminum sheets and steel scaffolding, the modular components they devised are as easy to assemble as they are to dismantle.

As a result, when it came time to shift the market from one urban infill site to another — Manifesto seeks out short-term leases that provide a stop-gap solution in anticipation of more permanent future developments — the nimble designers were able to reuse many of their previous construction materials. 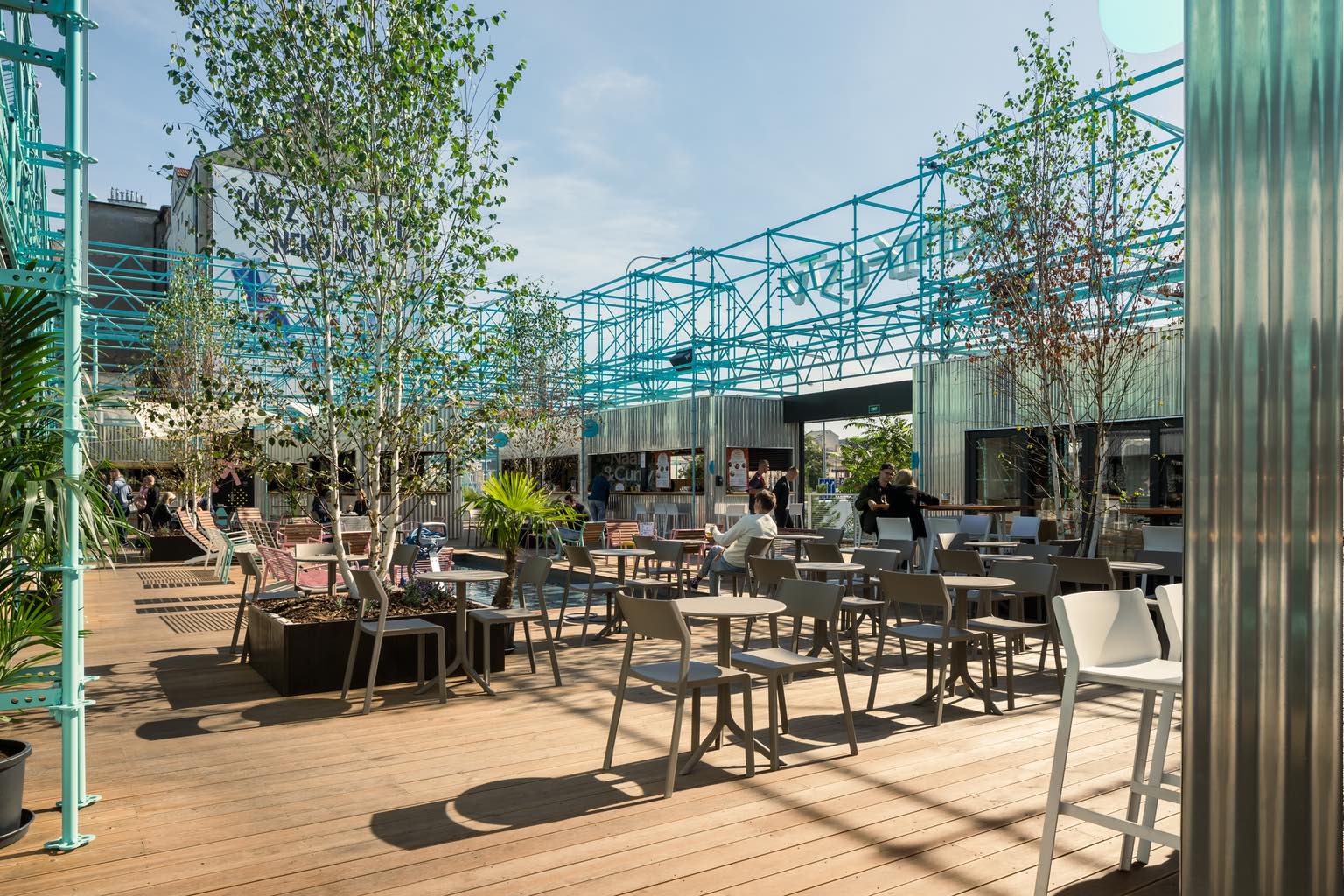 The layout of Manifesto’s new location, in Prague’s Andel district, takes its cues from the Czech Republic’s traditional arrangement of buildings around a large courtyard. 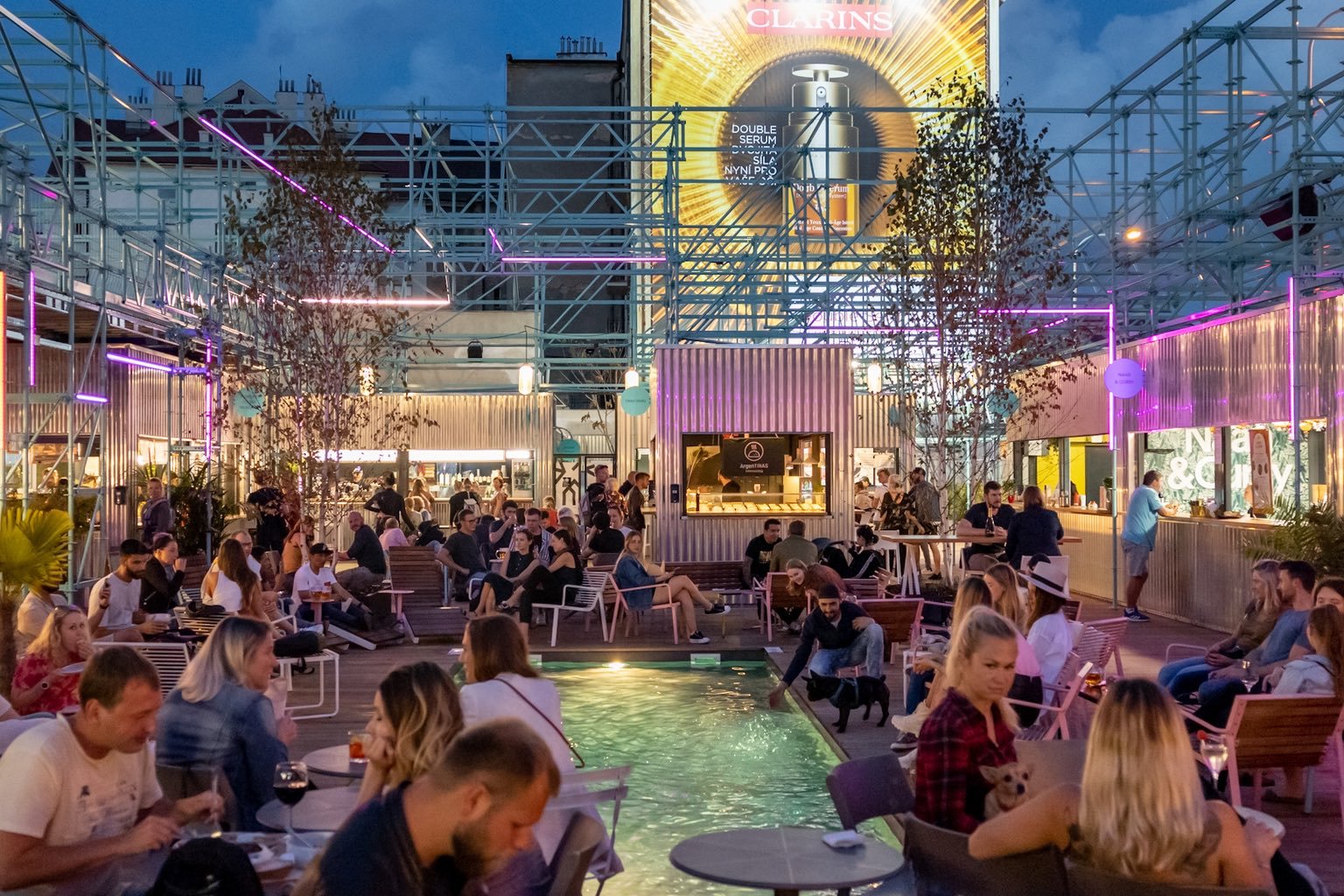 Food and drink stalls border a central dining area, which also incorporates a shallow wading pool for visitors to dip their feet into during the summer. 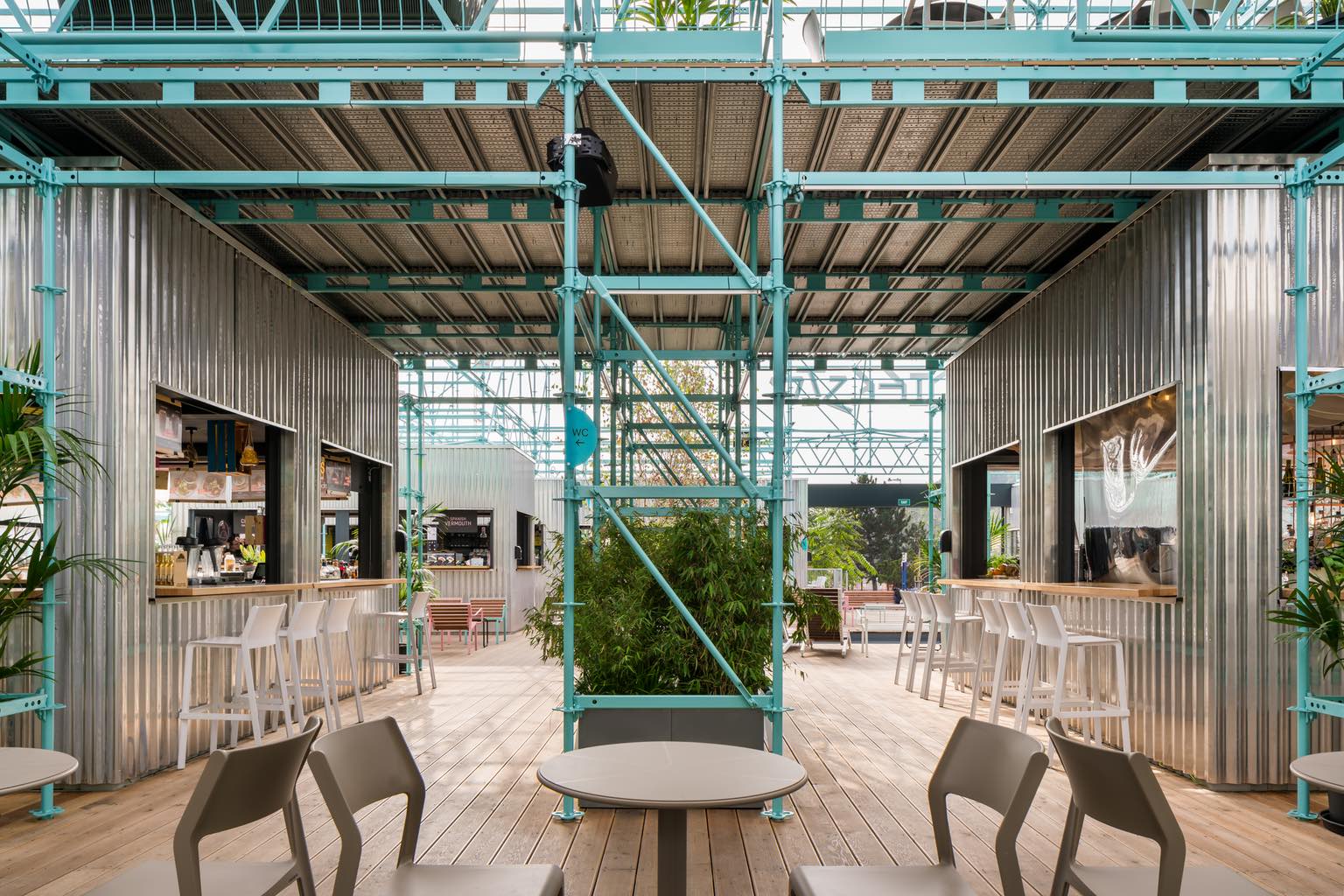 Splashed in a bright aqua blue, the market’s scaffolding acts as structural framing while also providing support for tube lighting, signage and speakers. This element is just as integral to the market’s visual identity, forming an enclosure that effectively contains the space yet also still feels open to the surrounding neighbourhood.

A wooden platform hides additional infrastructure elements that are running along the ground, all the while creating a level, barrier-free surface. Meanwhile, lush greenery throughout helps to soften the otherwise industrial design language. 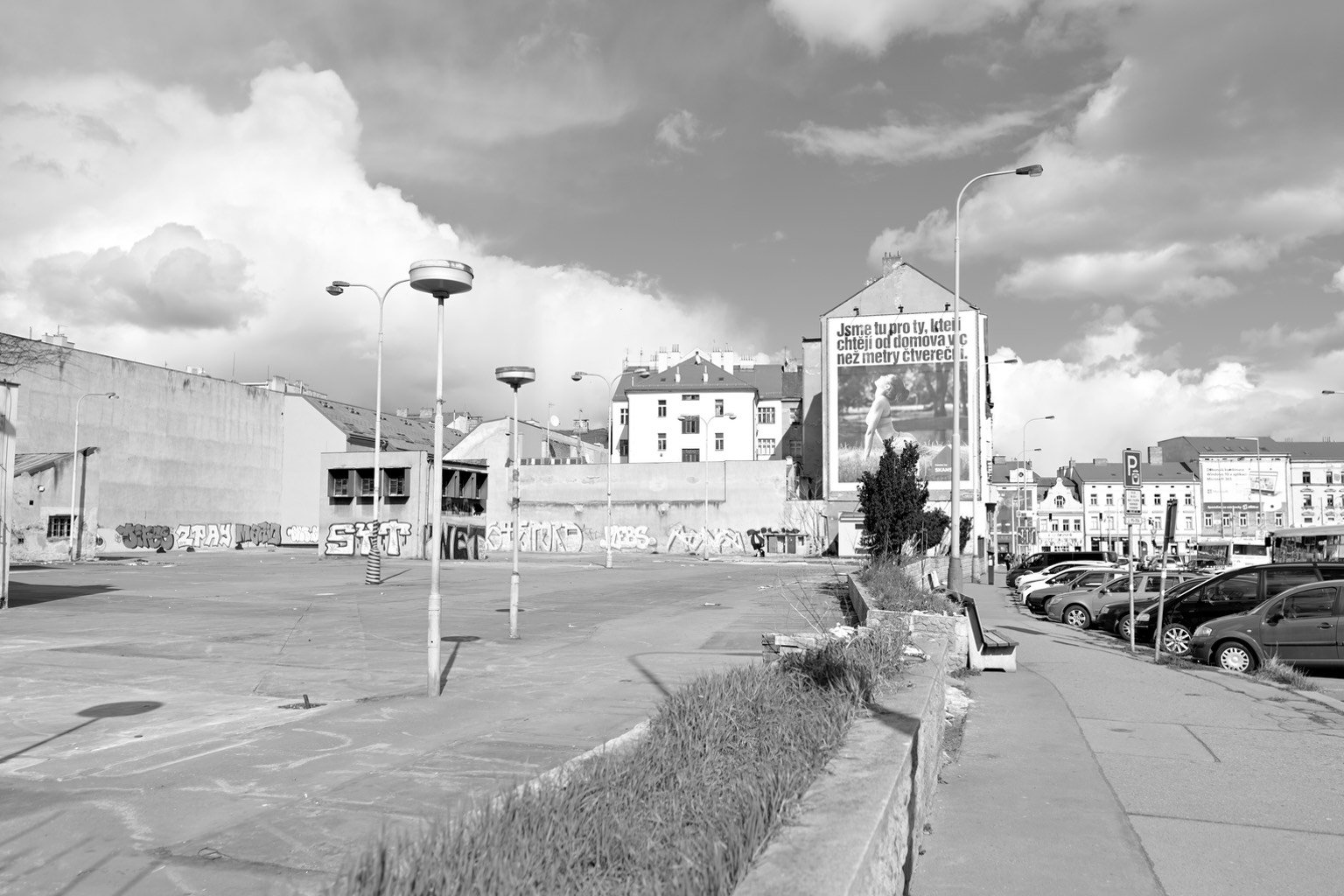 Following in the footsteps of its predecessors, Manifesto Market’s latest location is another example of an urban dead spot transformed into a dynamic social hotspot. With some eye-catching scaffolding, it successfully reveals the opportunity that awaits in overlooked corners of the city — and the way that placemaking can be developed quickly, sustainably and with an eye towards scrappy but impactful design.