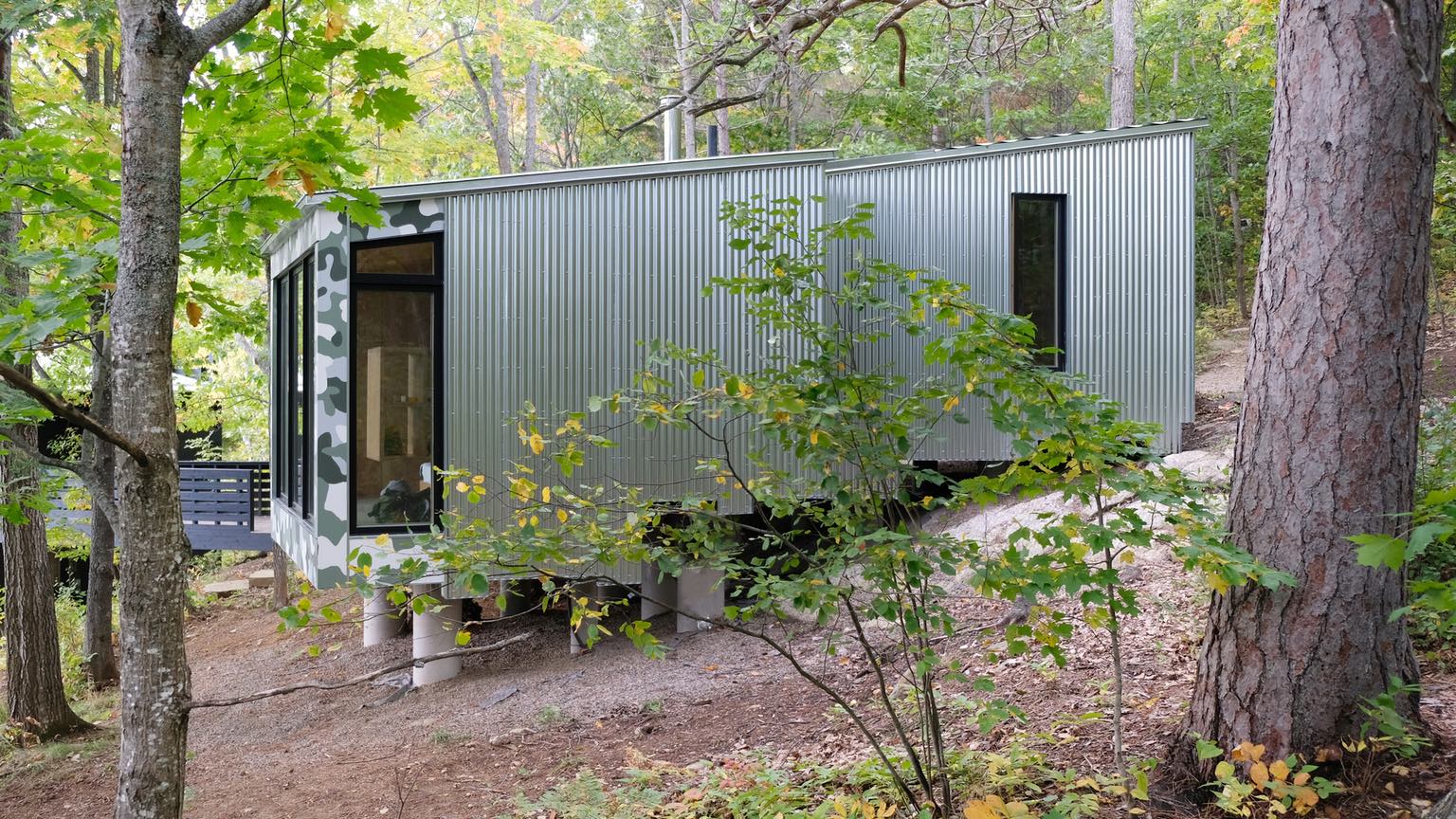 In the leadup to Valentine’s Day, we investigate how a rural Ontario getaway supports the relationship of a polyamorous trio.

“I just need some space,” is a common breakup sentiment — and indeed, a relationship can be heavily influenced by the environment that it plays out in. A healthy romance requires a setting that actively supports the enjoyment of another person’s company, but also allows for enough privacy to still maintain some degree of individuality. And while a lot of domestic architecture has evolved to successfully meet the needs of traditional couples, the desires of queer polyamorous throuples can require special consideration.

Enter Common Accounts, the design studio co-directed by Madrid-based Igor Bragado and Toronto-based Miles Gertler. Back in 2019, the duo — who met as architecture students at Princeton — were shortlisted to represent Canada at the 2020 Venice Biennale in Architecture for their proposal examining the modern-day obsession with “beautifying, hardening and enhancing” bodies. Who better, then, to develop a weekend retreat dedicated to an ongoing ménage à trois? 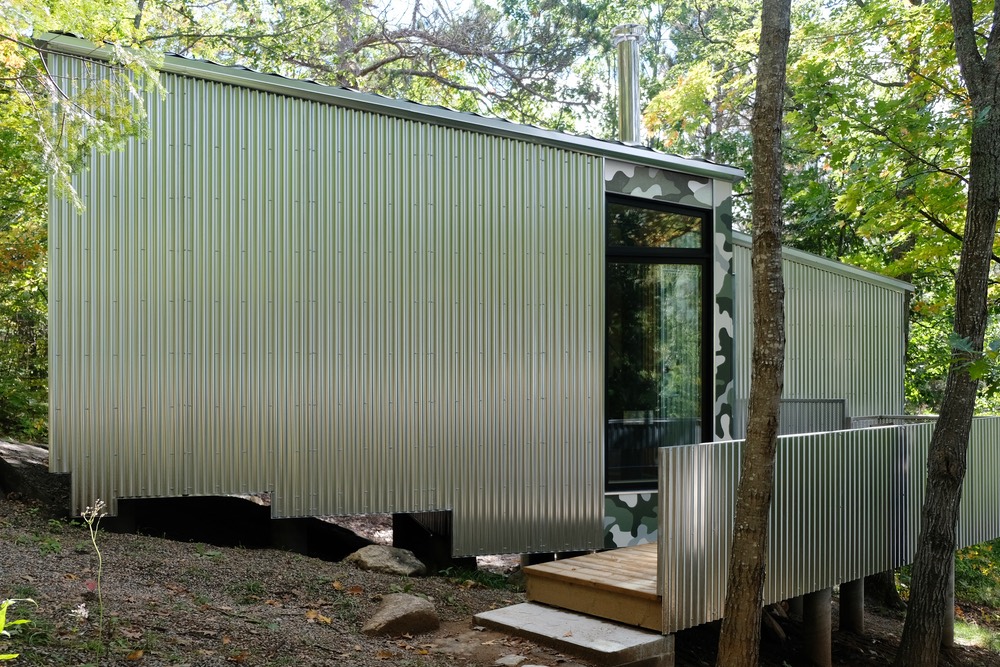 Completed this past fall, the cheekily named “Don’t Let Me Be Lonely” cabin exists as an outpost of a larger cottage a stone’s throw away near Ontario’s Algonquin Park. The owners of the main property hired Common Accounts seeking auxiliary guest accommodations for their son and his two partners — one of whom has a cat allergy that precludes him from sleeping in the central space. 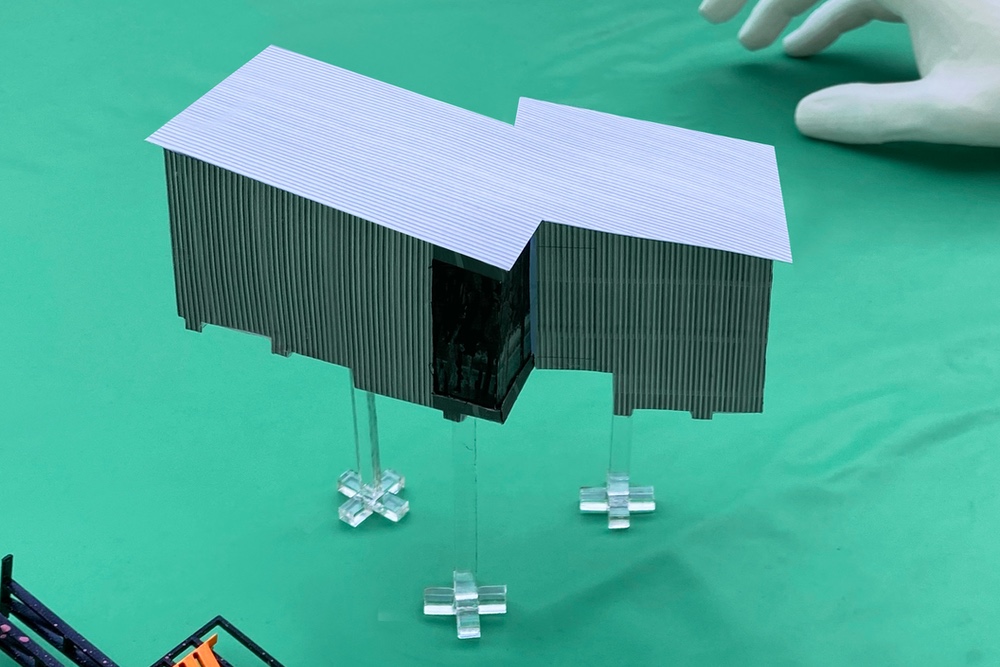 In turn, Common Accounts worked with the throuple to develop a satellite building that serves as its own secluded home base. (When the throuple is not visiting, the cabin also provides lodgings for other family members and friends.) While sited close together, the cottage and its neighbouring structure cannot be spotted through one another’s windows. “The cabin is instead oriented toward close views of the bedrock below, or to the water,” says Gertler. “It creates a sort of psychic distance.” 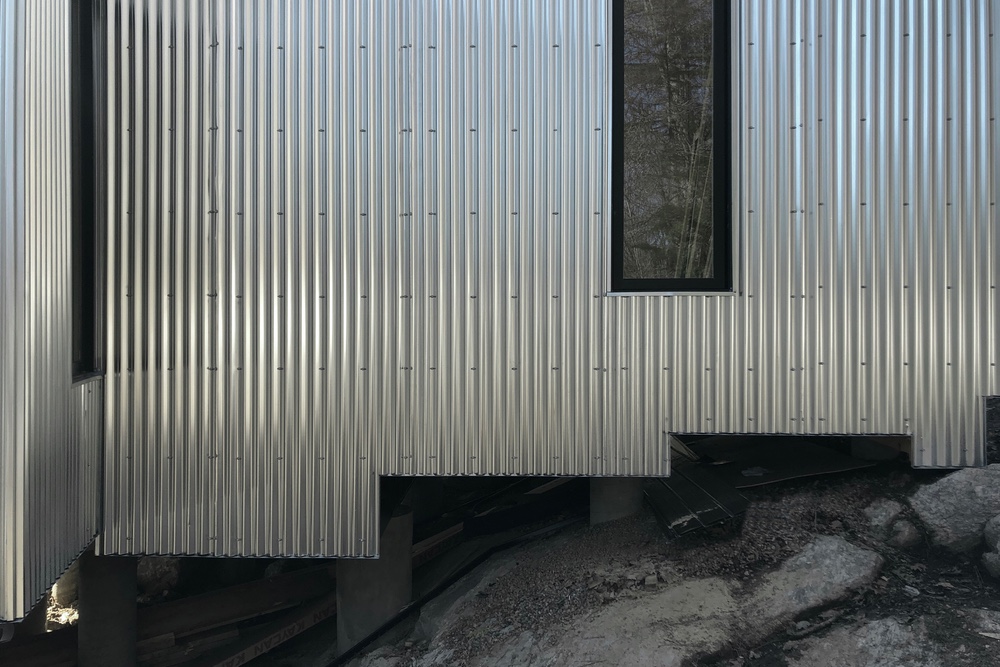 Throughout the interior, a number of other design strategies cater to the social dynamic of the building’s main occupants. A stepped floor not only mimics the topography of the sloped bedrock that the cabin is built on, but also creates distinctive zones — or what Gertler calls “stages for the body,” borrowing from the Raumplan concept of Adolf Loos — out of what is otherwise one large room. Thus, while the building is primarily meant to be a space of connection, it still facilitates some degree of separation. 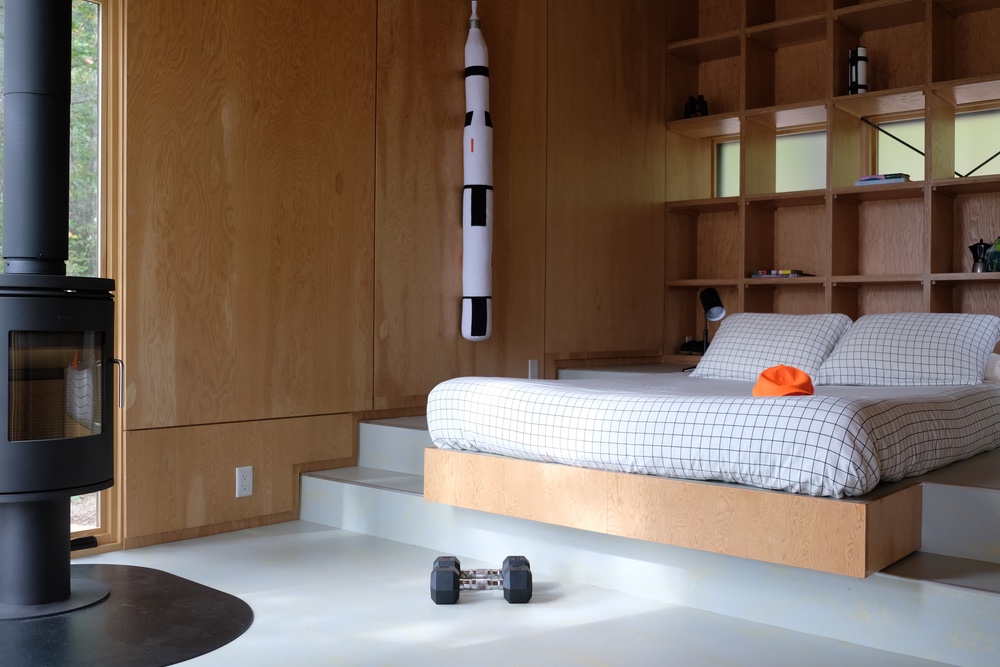 In another move that allows for the occasional conscious uncoupling, two different beds — one a California king, the other a twin — are installed at opposite ends of the space. By day, the smaller bed acts as a cozy reading nook, but by night, it also allows the throuple to orient itself as it sees fit. “There are funny peculiarities that you want to consider when you are designing for couples, let alone throuples,” notes Gertler. “If someone snores, you need to find a retreat. But on the coldest day of the year, it might be beneficial to cluster together. Offering that flexibility was important. Who says that you should all sleep in the same bed every night, or that there’s any one way to do things?” 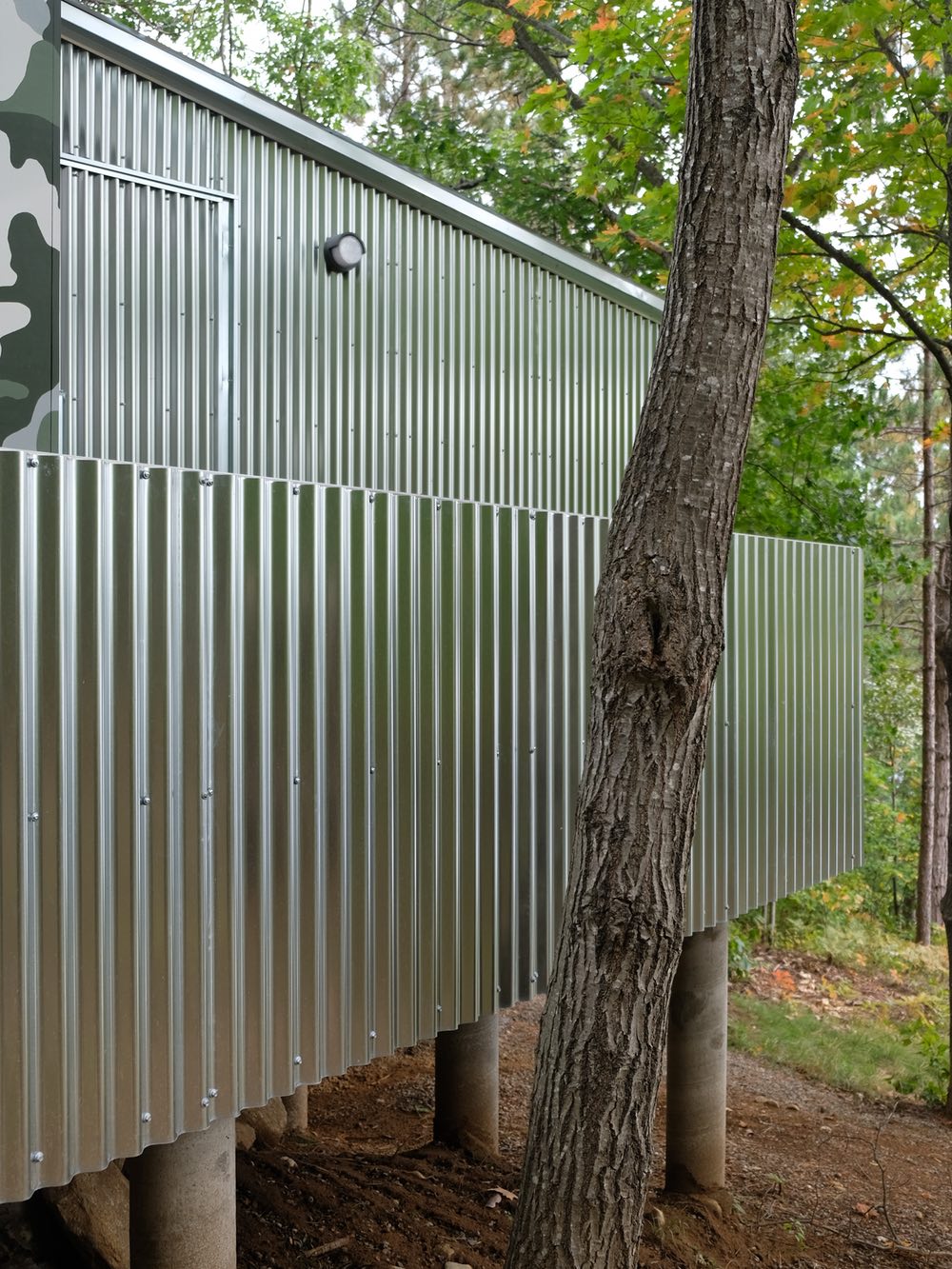 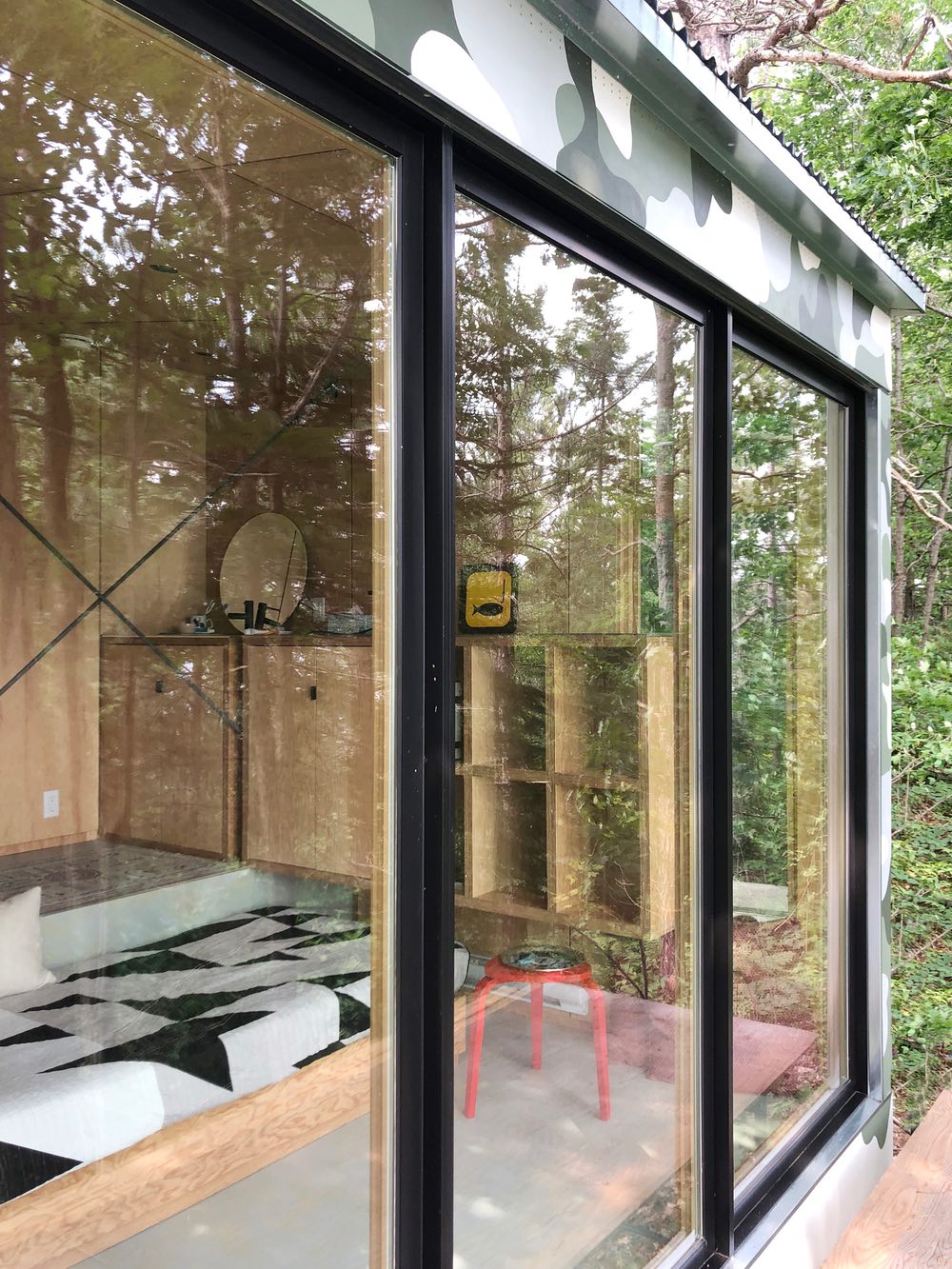 Along with supporting varying degrees of connection between its main occupants, the cabin also fosters a deeper connection to the natural landscape on display through its windows. By enclosing most of the building in corrugated steel — the same material used for the main cottage’s roofing — Common Accounts accidentally created a digital detox space. “It had the unexpected effect of diminishing cell reception inside,” says Gertler. “Which in practice, has actually turned out to be kind of amazing — because you are really at a remove from daily life once you enter.” 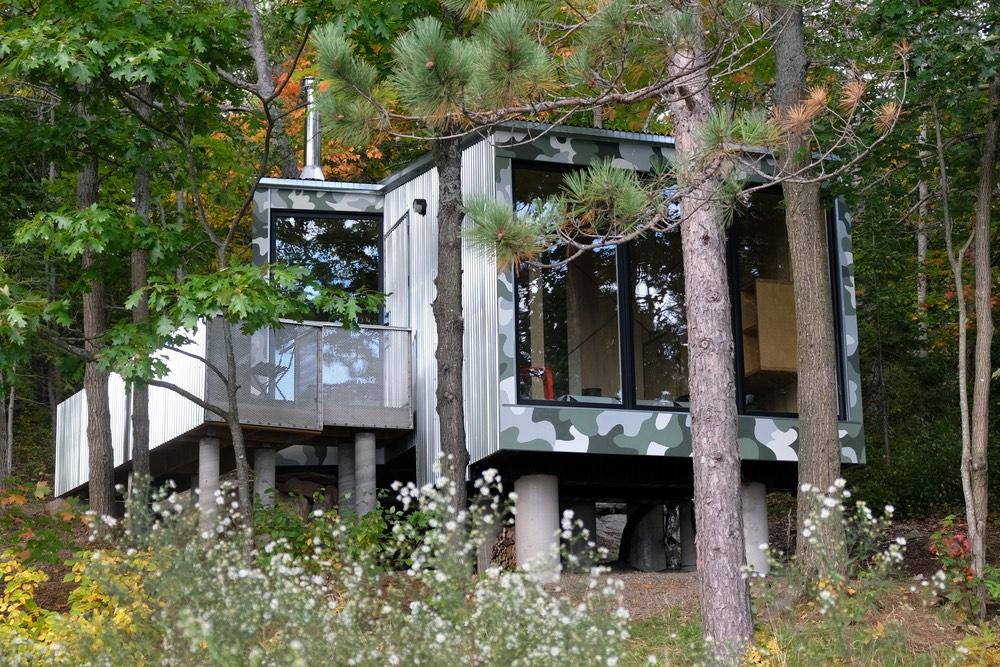 Other portions of the facade are splashed in a bold camo pattern inspired in part by the oversized banana leaf print that Michael Graves adopted at Walt Disney World’s Dolphin Hotel. Beyond being a playfully postmodern gesture to the surrounding forest — “It disappears to some extent, although of course, it doesn’t really disappear” says Gertler — the pattern is also a nod to the nearby Air Force Base, which sends military planes on practice loops over the cottage’s lake. 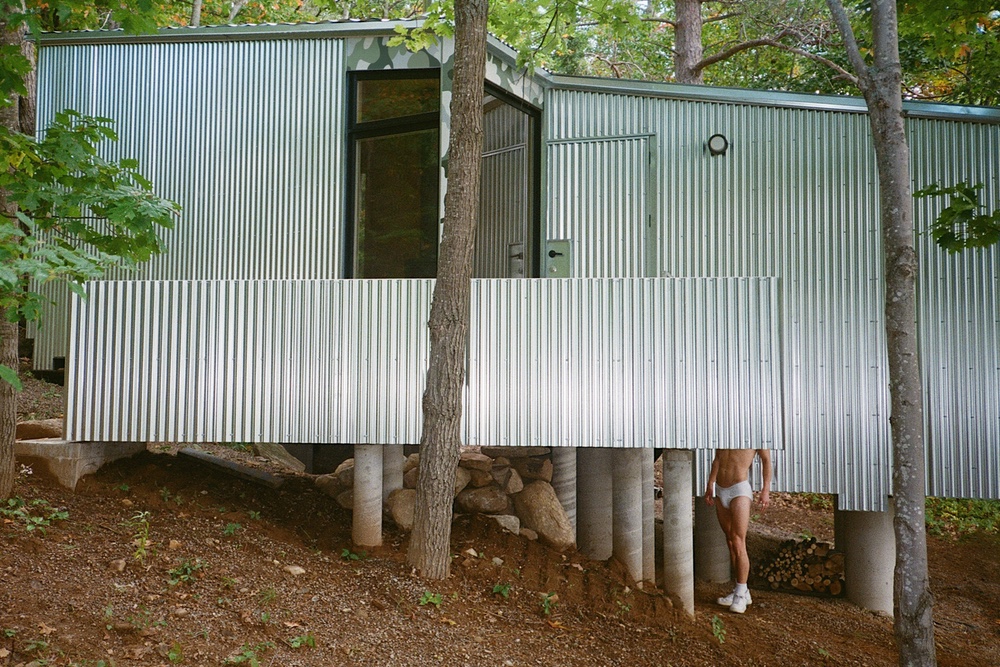 To highlight the cabin’s queer identity, Common Projects enlisted Toronto photographer Christopher Sherman to shoot his own series of project images. “Chris is known for the portraiture that he takes primarily of queer men,” says Gertler. “Moving beyond the lens that we have as architects, he was able to create this storytelling, placing the building in a supporting role to life within and around the space.”

In the leadup to Valentine’s Day, we investigate how a rural Ontario getaway supports the relationship of a polyamorous trio.