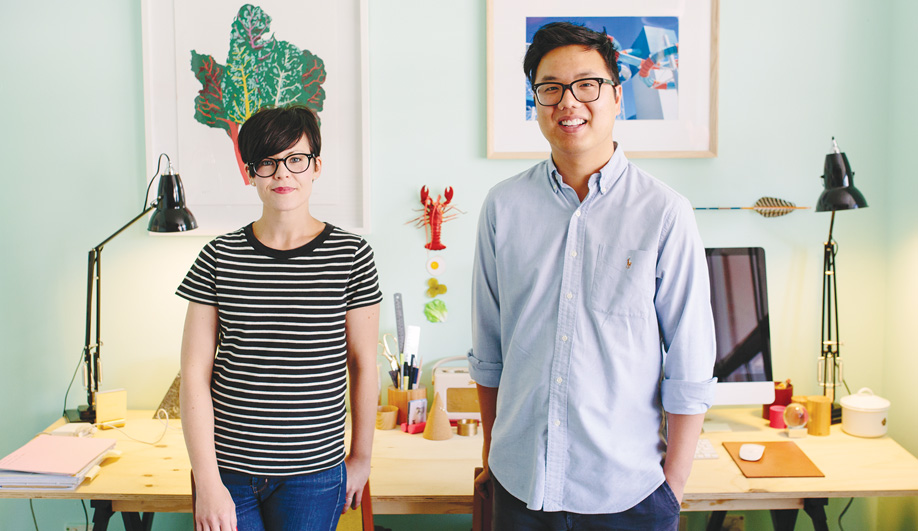 Working together
Daniel To: We met at university while studying industrial design in Adelaide. We did one project together and didn’t enjoy the process at all – and we vowed never to work together again. After university, we worked for a couple of years in London, where I did an internship with Harry Richardson and Clare Page [at art-based design studio Committee]. They’re a couple as well, and I learned a lot from them about how to collaborate.

The way we work now, the designs, the process – our whole life, actually – it’s all a collaboration. Our combined experiences are what make our point of view and our designs unique. Individually, we’re probably just average designers.

Emma Aiston: Projects only go ahead if we both like them. We’re quite good at being honest with each other, so we can happily say if something’s shit. 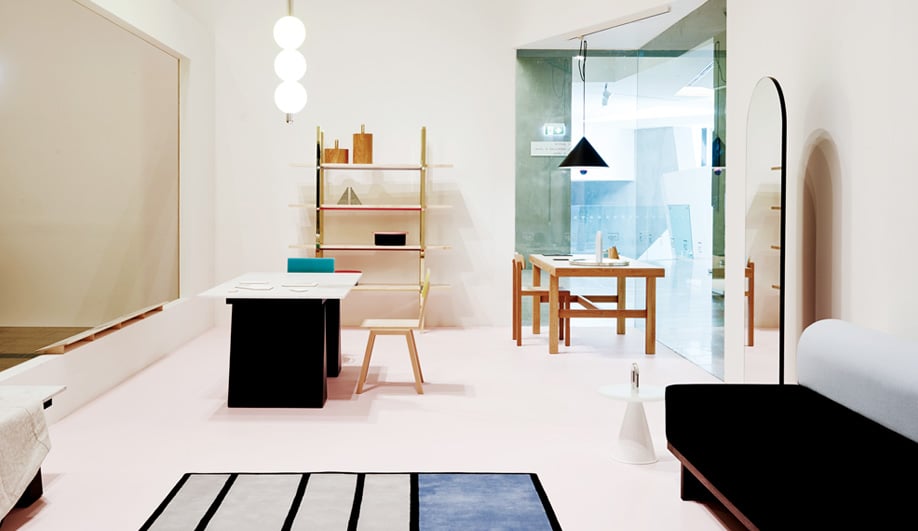 In 2015, Daniel Emma was shortlisted for the Rigg Design Prize, which launched the studio’s Home exhibition at the National Gallery of Victoria, in Melbourne. For the show, they designed a room’s worth of furniture and accessories.

Studio beginnings
DT: After London we’d come back to Adelaide and had non-design day jobs, but we wanted to make sure we didn’t lose momentum. So we set a goal to go back to London and exhibit at 100% Futures during the design festival. We chose stationery because we like it and it’s easily carried in our hand luggage – though we had some awkward conversations with security about the solid brass paperweights. It was fortunate, because no one else was doing stationery then. Now everyone’s doing it. 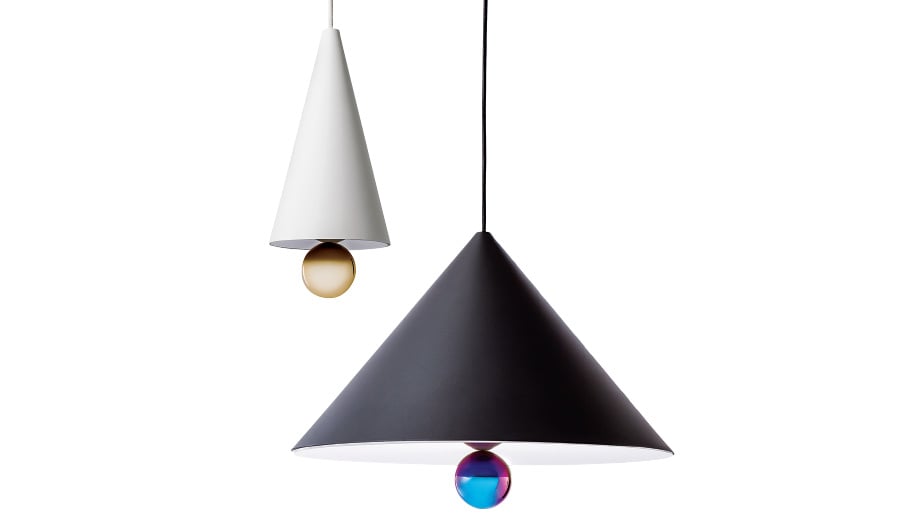 An earlier prototype that was part of the BIG! series evolved into the Cherry pendant lamps, now produced by Petite Friture.

Creative evolution
EA: That original set with the brass paperweights and magnetic tower was later chosen as a finalist for the Bombay Sapphire Design Discovery Award. The judges gave us a lot of advice about how to turn them into commercial products. We hadn’t really thought about making them en masse or retailing them, so we went away and thought, “How do we produce them at a reasonable price point, while keeping manufacturing in Australia?”

The following year, we entered the refined Solids collection and won. That was a good booster at that early stage. It motivated us to focus on making Daniel Emma a full-time thing. 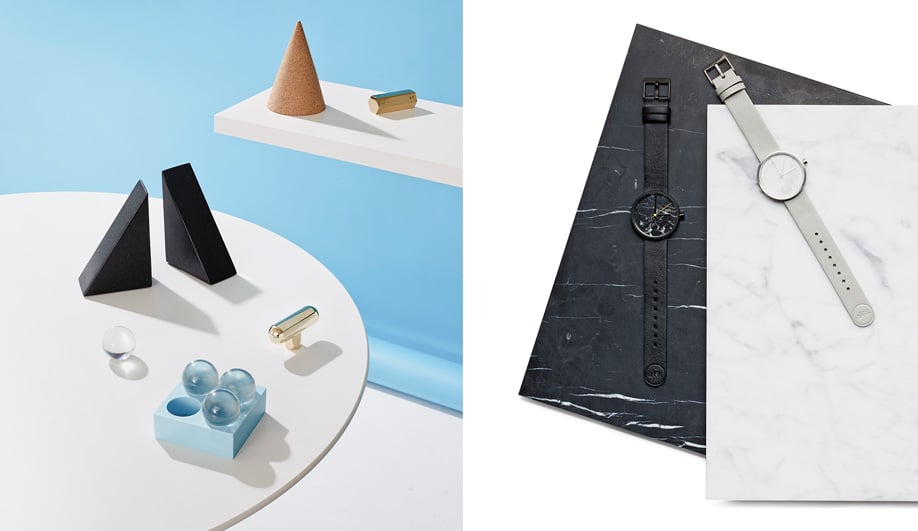 Left: Their first collection included solid brass paperweights, and they’ve since created many desk accessories, such as the Cork Cones now made by Wrong for Hay. Right: The Marble watch, from Aãrk Collective, features a thin layer of real stone.

Self-starters
EA: It’s important to show people you’re more than one thing. For a while, we were “the stationery people.” So we set ourselves projects – whether that’s an exhibition or just an exercise in designing – without clear-cut outcomes.

Being shortlisted for the Rigg Design Prize gave us the opportunity to create a whole room for the resulting exhibition that just finished in February at the National Gallery of Victoria. We started with some pieces we’ve produced with manufacturers, then just filled the rest of the space with stuff we’ve always wanted to design but no one asked us to.

DT: The Cherry pendant lamps we just launched with Petite Friture are based on one we did for an exhibition in Melbourne called BIG!, where we did a whole lot of bigger items. We showed that in London [in 2014], and Amélie du Passage, the brand’s founder, saw it and picked it up. It’s important to get out there and exhibit. It’s not until people see it in real life that they believe in the product. 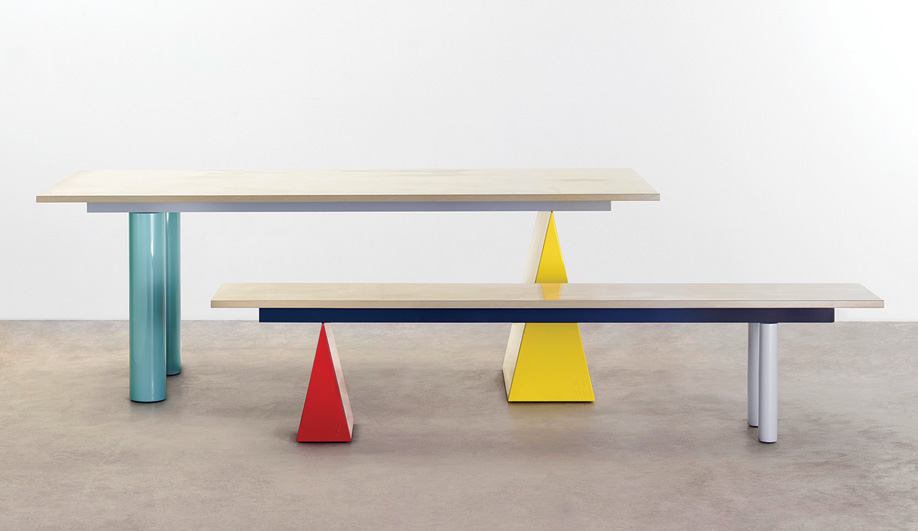 Pick ’n’ Mix tables and benches, from Tait, pair concrete, marble, or granite surfaces with colourful leg options that can be custom specified.

Diversity
DT: We’ve had great experiences recently, collaborating with companies like Hay, which is the “it” brand at the moment and produces our Magnetic Tower and Cork Cone desk accessories. As well, Aãrk Collective, in Melbourne, launched our Marble watches last year. That they’re also selling well is a nice thing, too.

We’ve worked with big and small clients and had some amazing opportunities, but some jobs are financially rewarding, while others are more creatively rewarding. One thing they don’t teach you in university is how to actually run a business, and we’re constantly trying to find the model that fits us creatively. Right now, we’re working 50 per cent of the week for ourselves, and 50 per cent for JamFactory, a studio, gallery and shop in Adelaide, where we’re in charge of curating the product range and the creative direction of the retail.

Our goal is to have a diverse business, from an income standpoint and a creative point of view, so we’ll do collaborations, commissions, limited edition work with galleries, then a small self-produced range.

Future directions
EA: We’re always planning ahead to the next project, rather than hanging about waiting for it to come to fruition. This year, we have an exhibition here in Adelaide, at Hugo Michell Gallery, and one at Pieces of Eight Gallery in Melbourne. And JamFactory’s first furniture collection, for which we have a chair and a table, will be released in June.

Just nice
DT: Our work is not political or statement driven. The idea is to make objects that are nice, something you simply enjoy. “Just nice” is a simple saying, and it’s also how we judge our work. Is it just a nice thing? That’s all it needs to be. ­