Designer Profile: Omar Gandhi
The Canadian architect who made his mark interpreting the Maritime vernacular extends his view to Toronto, and beyond. 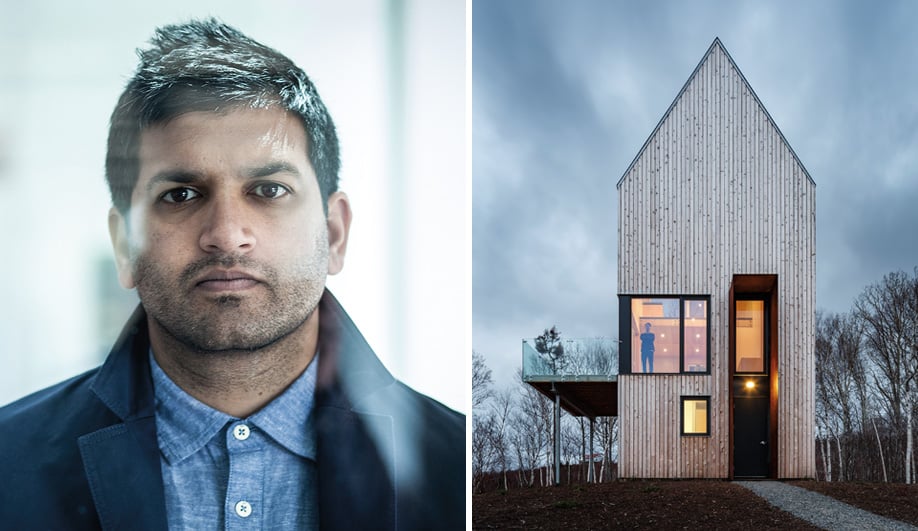 The Canadian architect who made his mark interpreting the Maritime vernacular extends his view to Toronto, and beyond.

In 2010, Omar Gandhi, a 30-year-old residential architect with a fledgling practice, was visiting a Nova Scotia cottage, which a client had commissioned him to renovate. The dwelling was unexceptional, but the site – a grove with a nat­ural bowl in the grass, overlooking the Atlantic Ocean – was extraordinary. On a whim, Gandhi asked, “What if we took the building down?” He proposed replacing it with a rectangular shed bent into a semicircle around the knoll, as if wrapping it in a maternal embrace. “Sometimes, you just decide to throw a Hail Mary,” he says.

In the six years since the success of Shantih, Gandhi has emerged as one of eastern Canada’s most acclaimed architects, known for simple structures (hipped or gabled barns) and humble materials (brushed concrete, plywood and strips of lightly varnished cedar). He specializes in rustic forms, subtly tweaked: a metal gable offset to accommodate a narrow window band at the ridge, or boxy shipping container-like volumes stacked asymmetrically to optimize views. In January, he opened an office in Toronto, shifting his rural sensibilities to an urban context. His work is adapting, too: “I want my aesthetic to change constantly.” 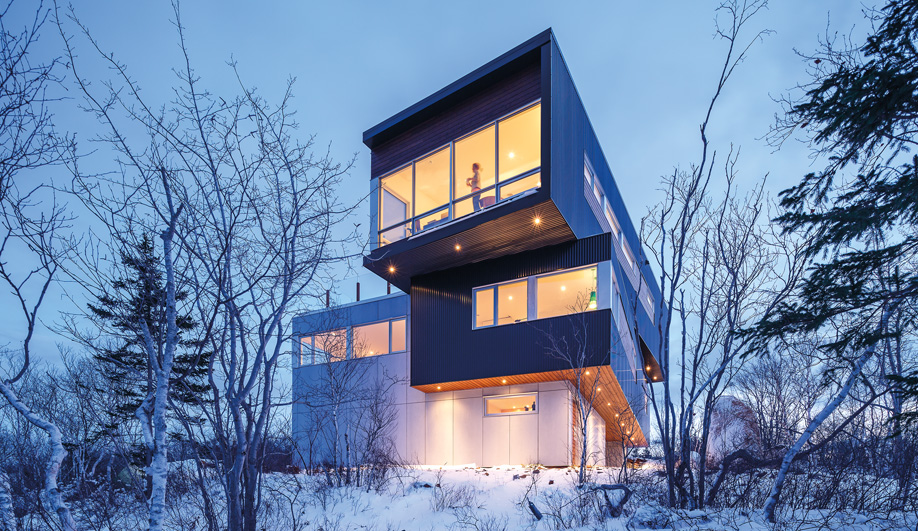 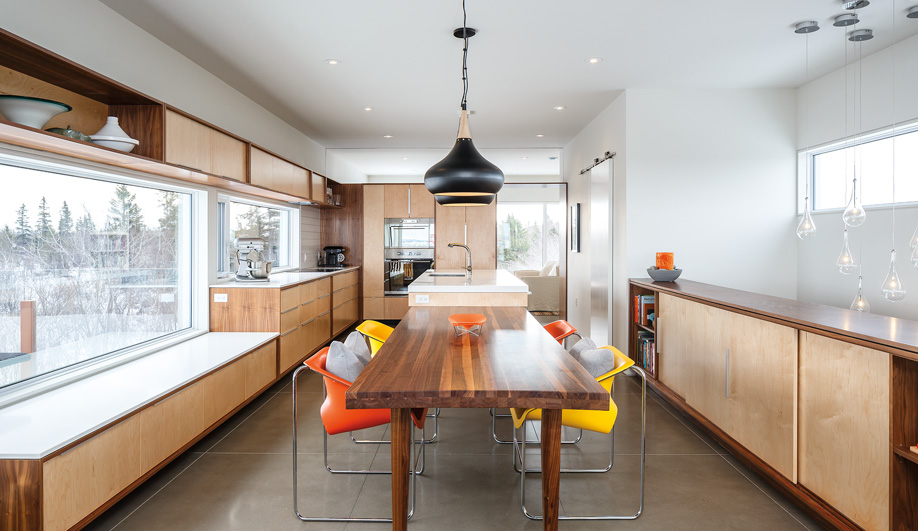 Fyren, 2015 Gandhi optimized views of the ocean and a nearby park with the stacked configuration of this house in Nova Scotia. The corrugated aluminum boxes are held up on concrete piers. Inside reveals humble materials and artfully framed views.

Backstory
Gandhi was initially seduced by eastern Canada in 2001, particularly by Dalhousie University’s craft-based M.Arch. program. Following postgrad stints at KPMB and Young + Wright in Toronto, he took a job with Brian MacKay-Lyons, the Halifax architect known for his iconic wood frame buildings. Like MacKay-Lyons, Gandhi specializes in abstracted versions of vernacular styles based on workaday buildings like barns and farmhouses, but it’s hard to picture him simply mirroring his former boss’s oeuvre. MacKay-Lyons’ buildings twist, protrude and hover; while Gandhi’s, for the most part, sit firmly on the ground.

He founded his small Halifax firm, Omar Gandhi Architects, in 2010, hoping to make functional work with minimalist beauty. Rabbit Snare Gorge is good example of this. Its shape appears as a basic gabled farmhouse, but elongated – a tall, regal structure on a hill overlooking the Northumberland Strait. The one major affectation is a 6.5-metre-high Corten hoop around the entrance, a riff on a local form that prevents the wind from pulling doors open during harsh Maritime storms. “It’s there to emphasize the scale of the building and the landscape,” says Gandhi. “When you stand in front of it, you feel incredibly small.” It’s both conceptually simple and wildly evocative – the kind of accent he does best. 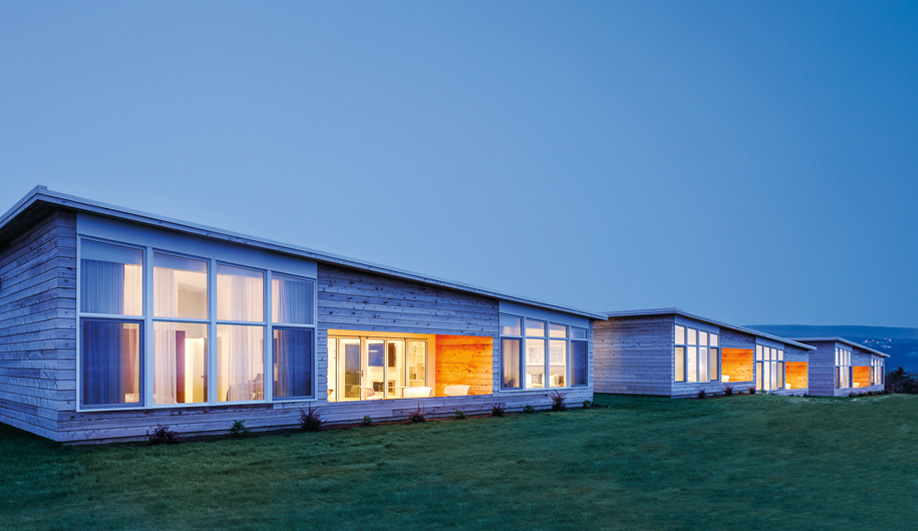 Cabot Links Villa, 2015 Set on a golf course on the scenic island of Cape Breton, the villas are part of a larger grouping of residences and retail spaces, with sweeping views of lush greenery. The angled rooflines add movement, breaking up the boxy shapes.

Tipping Point
He begins each project by touring the property with his client, and he is the first to acknowledge that his success is attributable in part to the sites he has worked on, extreme backdrops that demand architectural responses. Float, a recent nominee for the Mies Crown Hall Americas Prize, is located in Purcell’s Cove, Nova Scotia, amid the foggy backlands: granite outcroppings with scraggly trees decimated by forest fires.

The suite of four interconnected sheds, clad in pinkish-grey spruce, look almost geological, like chunks of stone detached from the bedrock. They alternate major and minor sides, depending on the views, and the horizontal windows focus on the panoramic ­vistas. There’s no shortage of creativity, all in service of the rugged landscape and daily life; for example, the sleeping quarters are in separate volumes from the living area, giving the clients ample guest space in a house that still feels cozy. 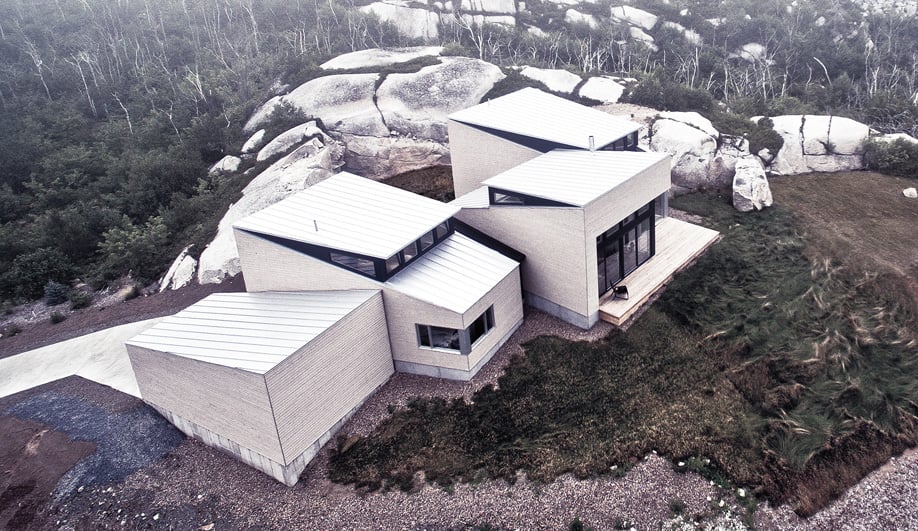 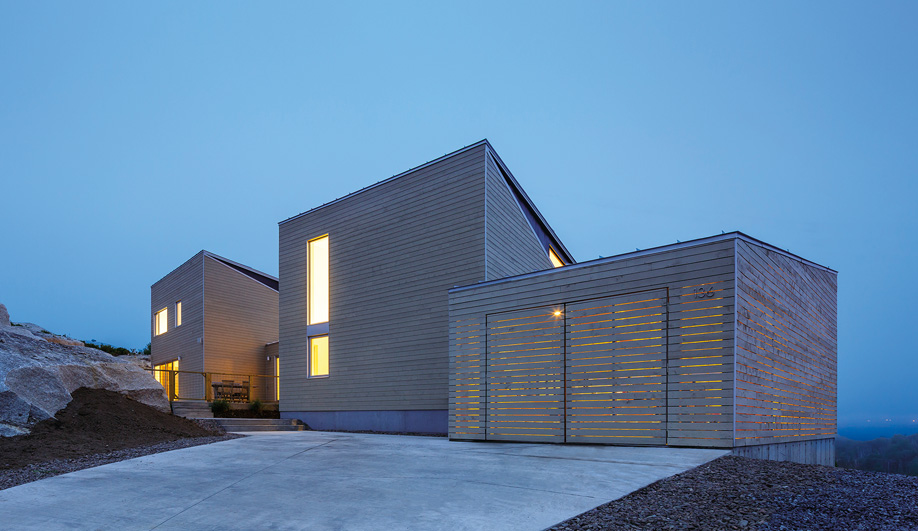 Float, 2015 Exemplifying Gandhi’s unique take on Maritime vernacular forms, this series of volumes appears to emerge from the rocky terrain. The grey-washed wood cladding emulates the striations of the site’s bedrock. A central volume houses the main living area and two sleeping zones.

What’s Next
When asked about his influences, Gandhi immediately mentions Renzo Piano, which may seem surprising, since Piano, creator of the Shard in London and New York’s Whitney Museum of American Art, isn’t exactly a sheds-and-shacks guy. Gandhi also lauds Vancouver’s John and Patricia Patkau and Newfoundland native Todd Saunders, but it is Piano’s adaptive, curious disposition that he most wants to emulate.

“I admire people who produce different kinds of architecture all the time,” he says. “Not because they’re trying to reinvent themselves, but because they’re enamoured with the architectural process.” This belief in adaptation will serve him well as he edges into Toronto, a city in desperate need of high-density buildings that don’t crowd out the heritage fabric.

Among his forthcoming projects, Sluice Point, inspired by Acadian forms, is perhaps the most unique. “There are cedar shingles on the roof, the walls, everything,” says Gandhi. “It looks like it grew out of the landscape.” The mounded shape is a departure from his previous work, but it may be the best indication of where he’s headed. For him, the appeal of the vernacular lies in its practicality, not its folksiness.

“It is the simplest, most intelligent way of dealing with certain truths,” he says. “It’s the way people have built for centuries.” However, what was most practical in Confederation-era Nova Scotia may not be optimal in an age of digital modelling and 3‑D printing. Vernacular, says Gandhi, should change with the times, and if his quest for humble, pragmatic design takes him to radical new aesthetics, so be it. 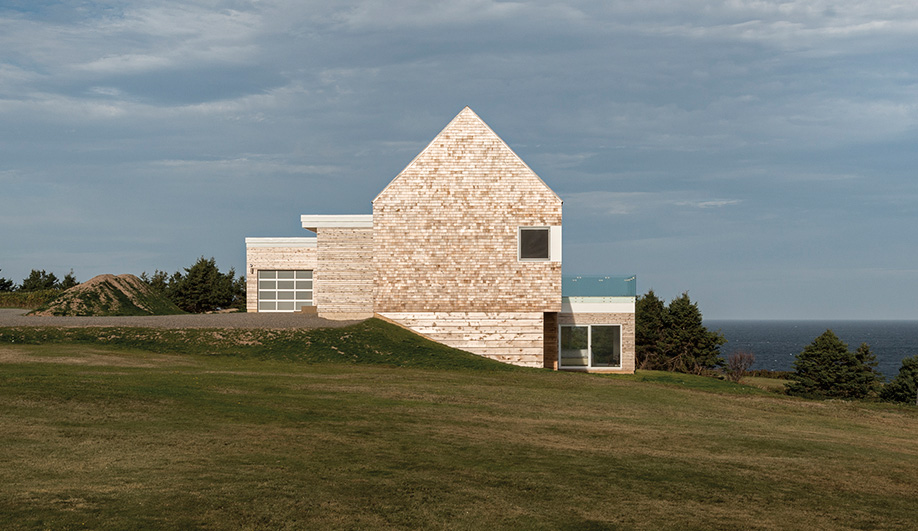 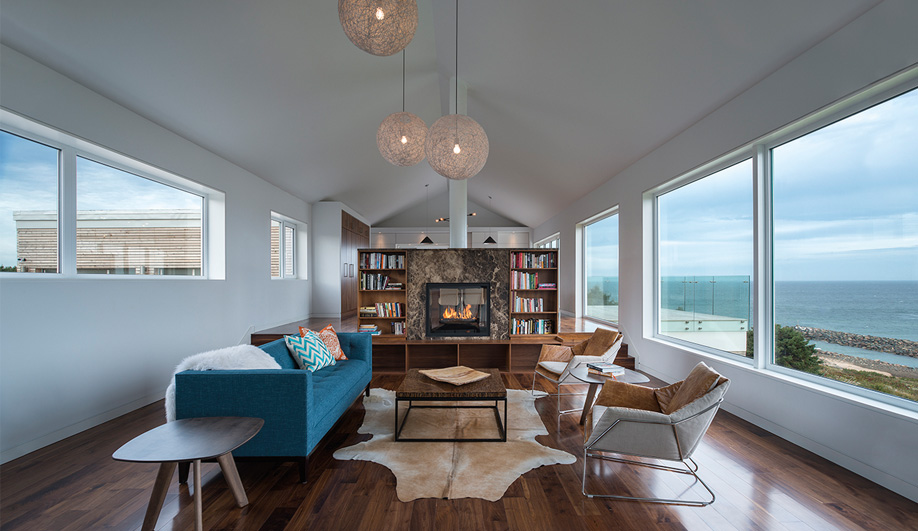 Harbour Heights, 2014 This large, barn-shaped house is clad entirely in red cedar, with shingles on the roof and the upper level, and boards below. It reads as a single storey from the roadside and extends down an incline at the rear. Inside, oversized windows and clean lines make for a serene environment. 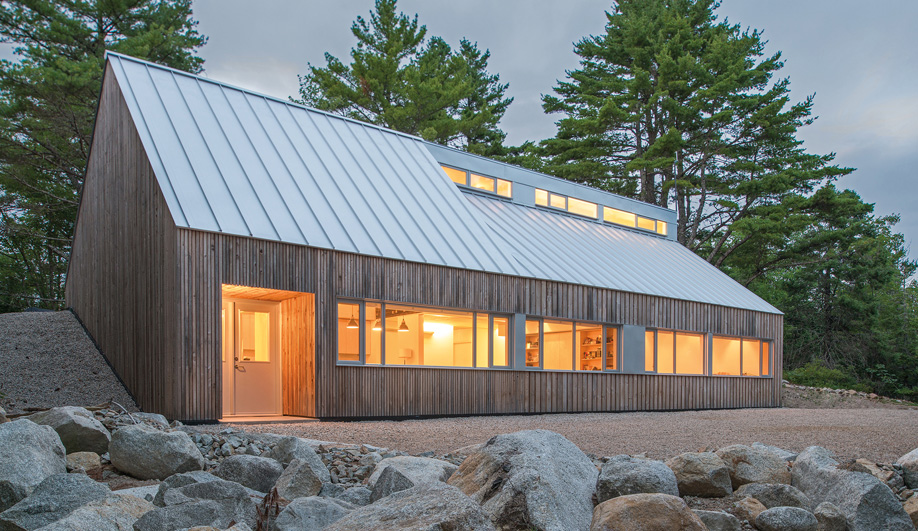 Moore Studio, 2012 An earlier work, this studio and residence for two retired artists exemplifies Gandhi’s fondness for basic materi­als, simple forms and a connection to the land. The shed-like structure is clad in local spruce, with a metal roof tweaked to accommodate a horizontal band of windows at the ridge.
SHARE
Twitter, Facebook, LinkedIn, Pinterest, Email
TAGS
Personalities, Residential,
We rely on advertising revenue to support the creative content on our site. Please consider whitelisting our site in your settings, or pausing your adblocker while stopping by.