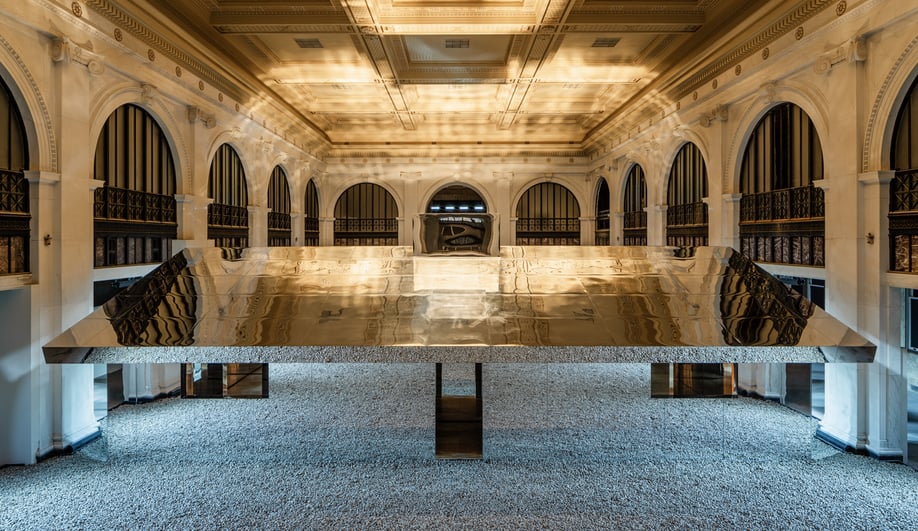 In its century-plus existence, Detroit’s State Savings Bank, also known as the Savoyard Centre, has served multiple purposes. Designed by McKim, Mead & White, the Neo-Classical building stretches across a city block, and beyond its origins as a bank – at one time, it was Detroit’s largest – it has served as an office supply store, a clothing retailer and a Super Bowl party venue. Yet despite its storied past, preservationists have fought for the building’s existence: in 2013, for example, its one-time owner proposed turning it into a surface parking lot. 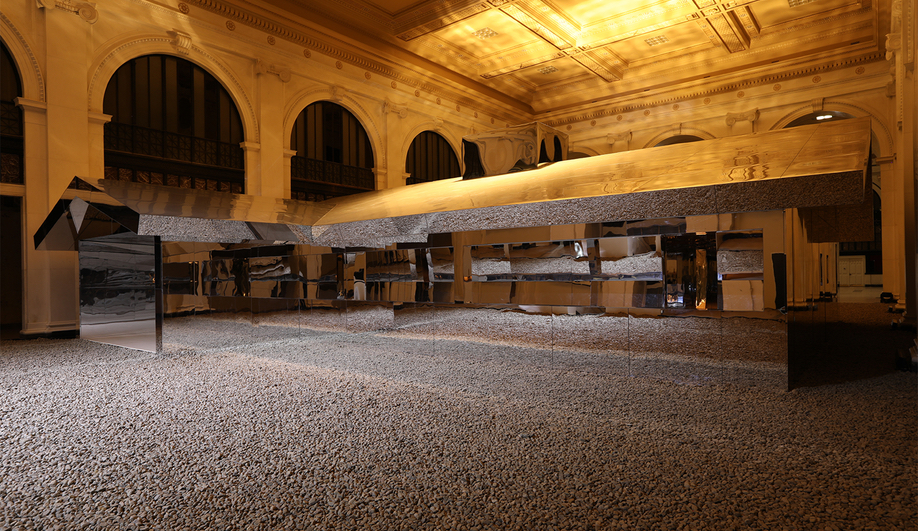 Thankfully, the building, which was uninhabited for decades, persevered. And thanks to Los Angeles artist/filmmaker Doug Aitken, the site has been activated with Mirage Detroit, a giant installation that puts the building on full display, while treating visitors to an immersive, kaleidoscopic experience. Produced in partnership with local art gallery Library Street Collective, the installation uses State Savings Bank’s sprawling interior – it’s roughly 70,000 square feet – to house a mirrored pavilion that loosely resembles a stereotypical suburban home. 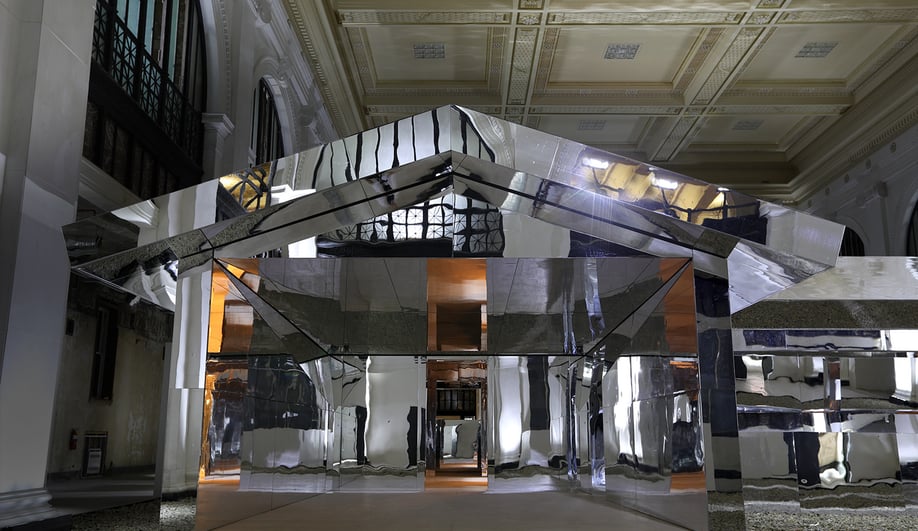 For Aitken, this isn’t an entirely new concept: Mirage Dayfigure placed a similar mirrored structure in California’s Palm Springs desert in February 2017, using the installation to reflect, absorb and disappear into its surroundings. These houses, says Aitken, were “reconfigured as an architectural idea: the seemingly generic suburban home [is] now devoid of a narrative, its inhabitants, their possessions. This minimal structure now functions entirely in response to the landscape around it.”

At Mirage Detroit, visitors enter a soaring room rife with classical features. The bank’s interiors – which Aitken described as being “cryogenically frozen” – took local developer Bedrock Detroit 18 months to restore. Once inside the space, guests are guided towards the mirrored house with carefully choreographed lights that fill the room with swimming pool-like ripples of light. This is hardly a portrait, organizers note, of Detroit’s decaying architecture. 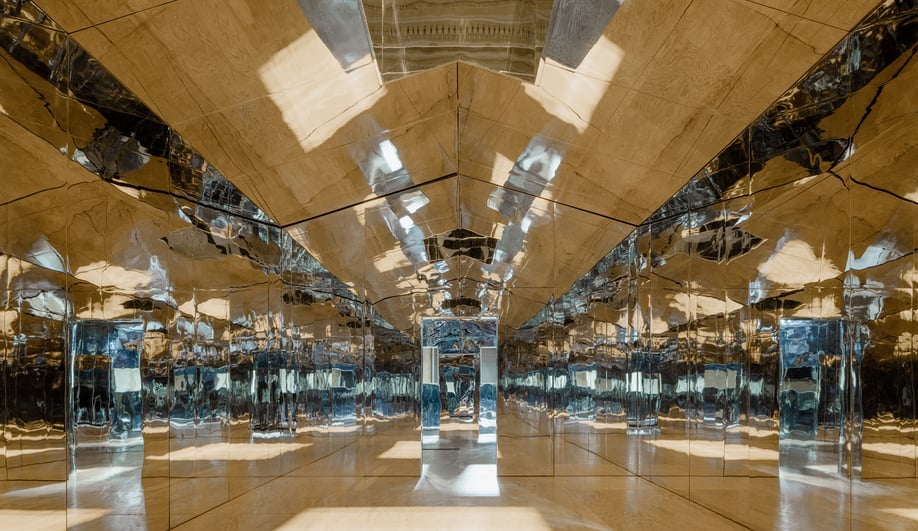 The light show results in a “human-scale kaleidoscope,” that makes the pavilion’s skin seem to shapeshift. “The contrast [between the pavilion and its surroundings] is extreme, with reflections of the aged architectural details juxtaposed with the marble floor returned to a raw state covered in earth and stones,” Aitken says. “It is a constantly shifting landscape that incorporates the organic and inorganic, reflects the industrial past, and questions the future.” 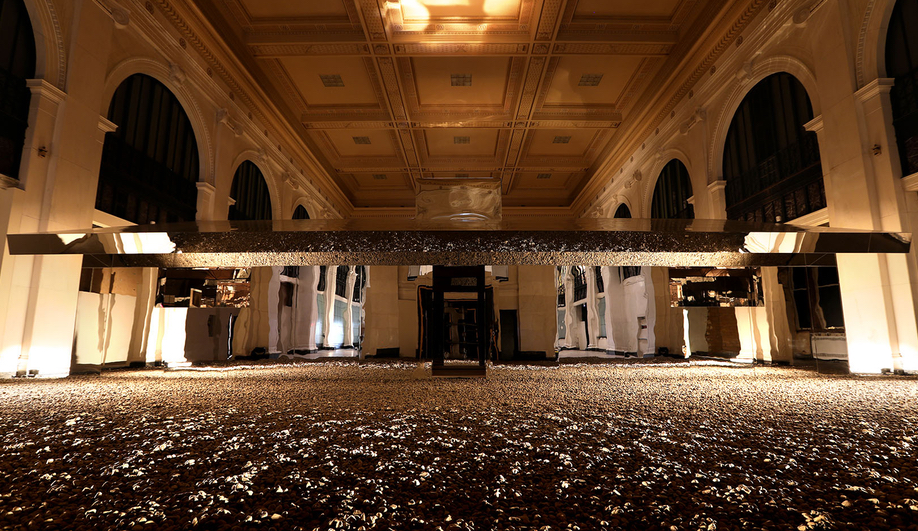 Visitors are invited to head further inside the one-storey structure, which creates a “perceptual echo chamber.” Like a psychedelic fun house, rooms and corridors unfold in a serene, if disorienting fashion. Old and new, interior and exterior all blur together. “It is a constantly shifting landscape that incorporates the organic and inorganic, reflects the industrial past, and questions the future,” says Aitken. “Mirage Detroit presents a continually changing encounter in which subject and object, inside and outside are in constant flux.” 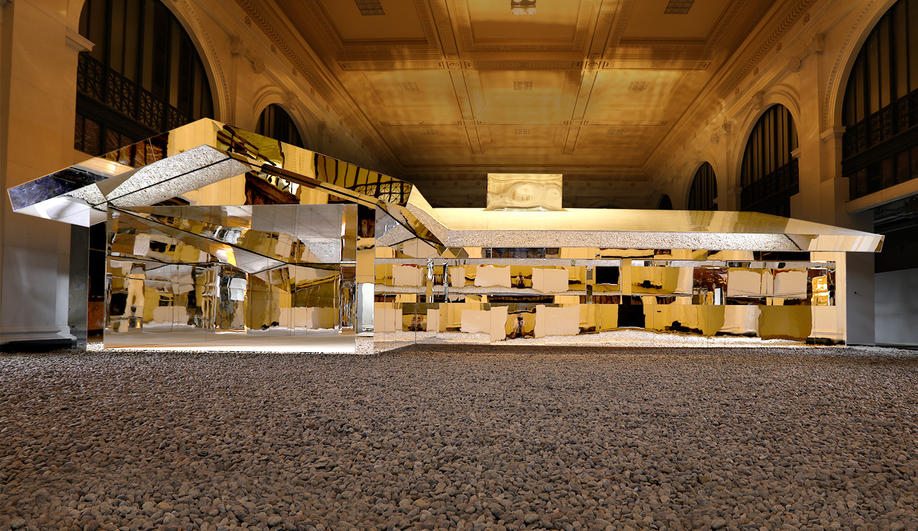 Detroiters, who haven’t been able to access the Slate Saving Bank in decades, are encouraged to experience the building in new – and completely unexpected – ways. What they take from it, says Aitken, is purely subjective. “There is no fixed perspective or correct interpretation,” he says. “Each experience of this living artwork is unique.”

Detroit Mirage is on view until February 2019. Its October 10 opening featured a performance from Icelandic post-rock icon Jónsi.