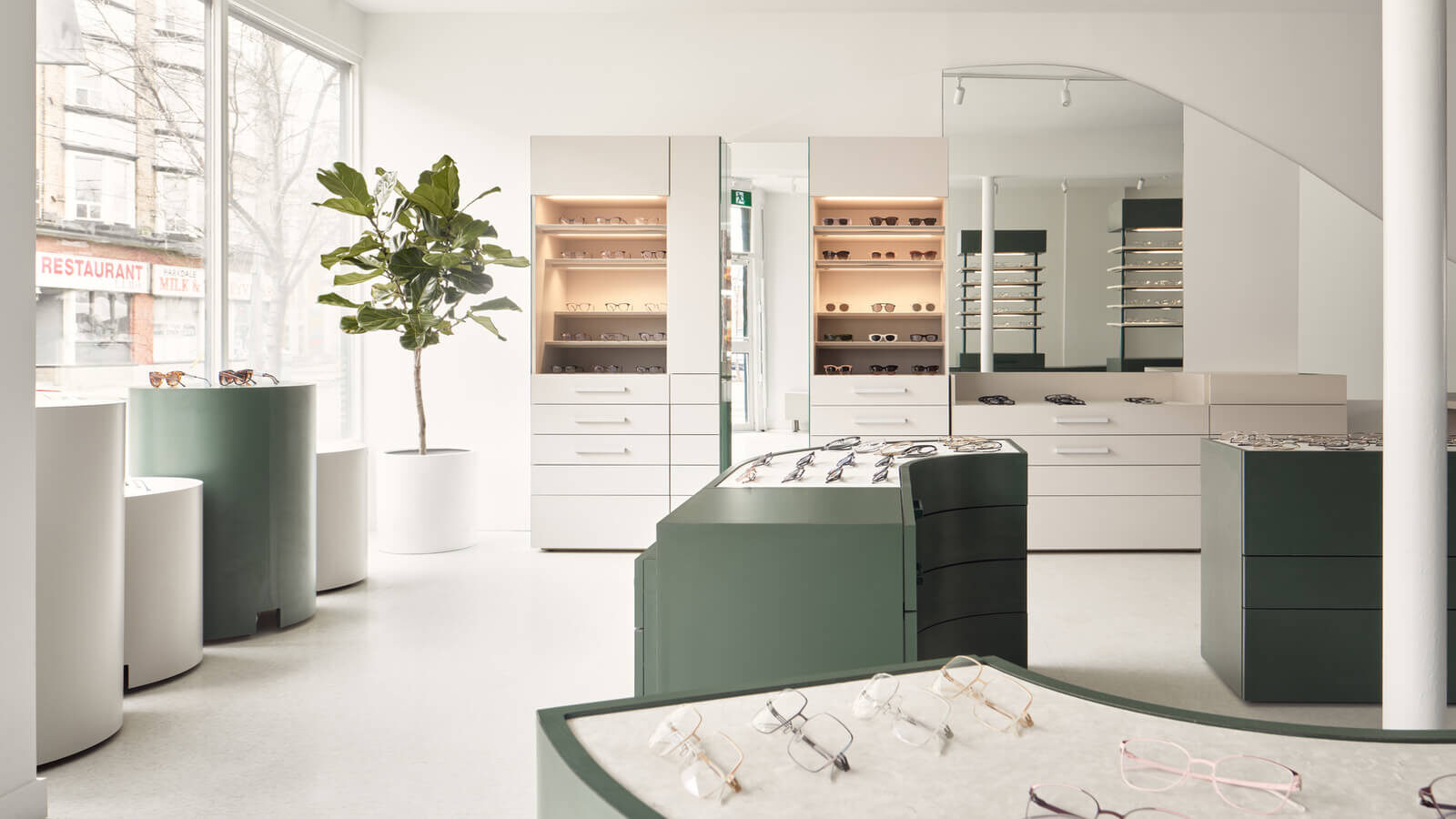 An Eyewear Boutique as Flexible and Charming as its Products

Part of the fun of wearing glasses is the easy reinvention they afford. Why, then, do most eyewear boutiques feel so rigid? This was the question designers Emma Sims and Darcy Hanna, co-founders of Vancouver studio &Daughters, began with while developing eyewear outfit Frankly’s first shop in Toronto. 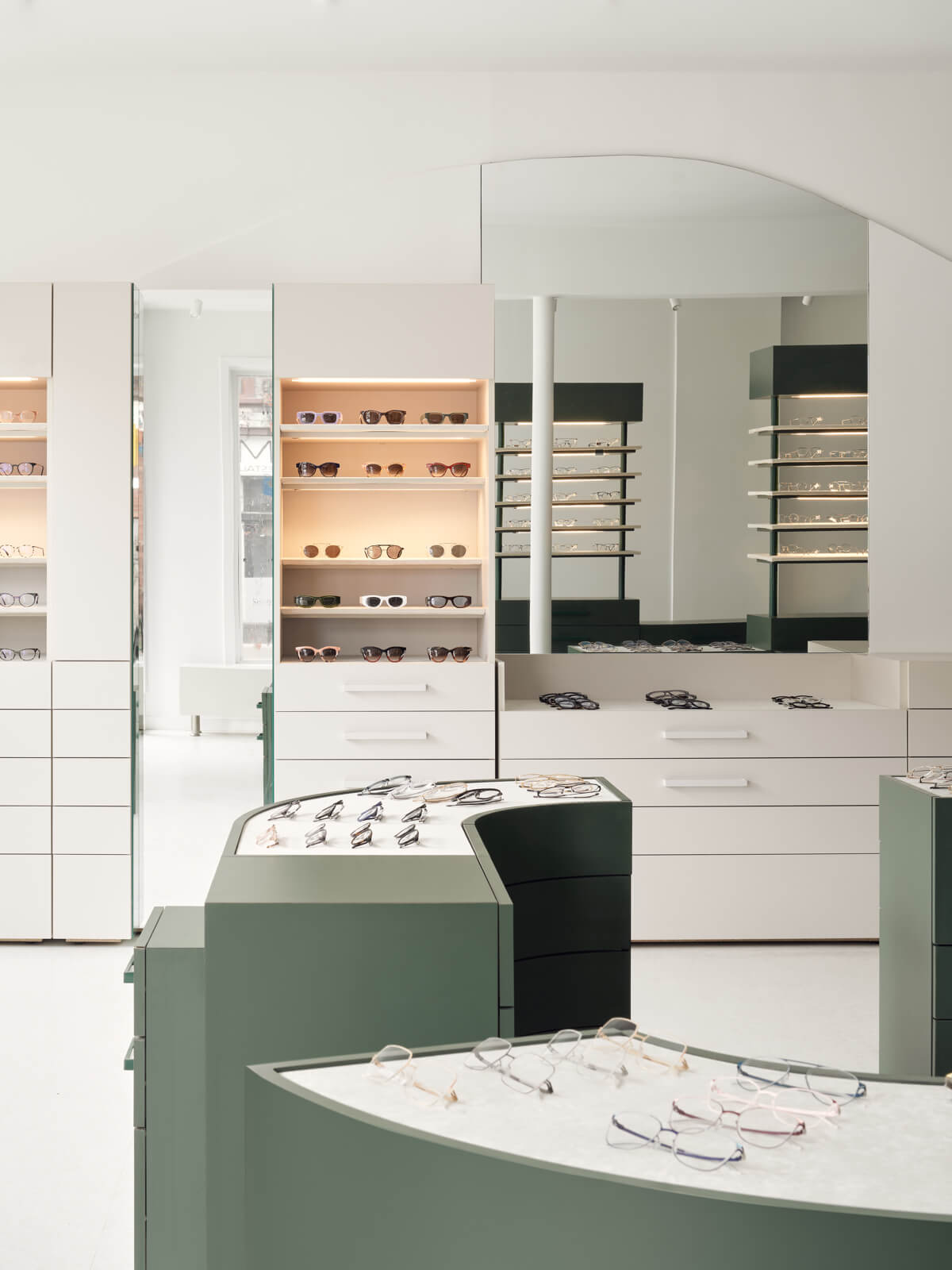 While a more casual, dynamic set-up seemed like a natural way to express the brand’s modern identity, it was also a strategic response to the unpredictability of commercial real estate. Frankly had found its eventual storefront — a bright gem of a corner unit in the city’s Parkdale neighbourhood — only after leases for other potential locations fell through. Sims and Hanna, therefore, set out to anticipate any possible relocations that might be necessary down the road — and to enable in situ reconfigurations for future store events. “It’s an insurance policy,” Sims says. “After investing in a beautiful space, no matter what happens, they can load it onto a truck and take it with them.” 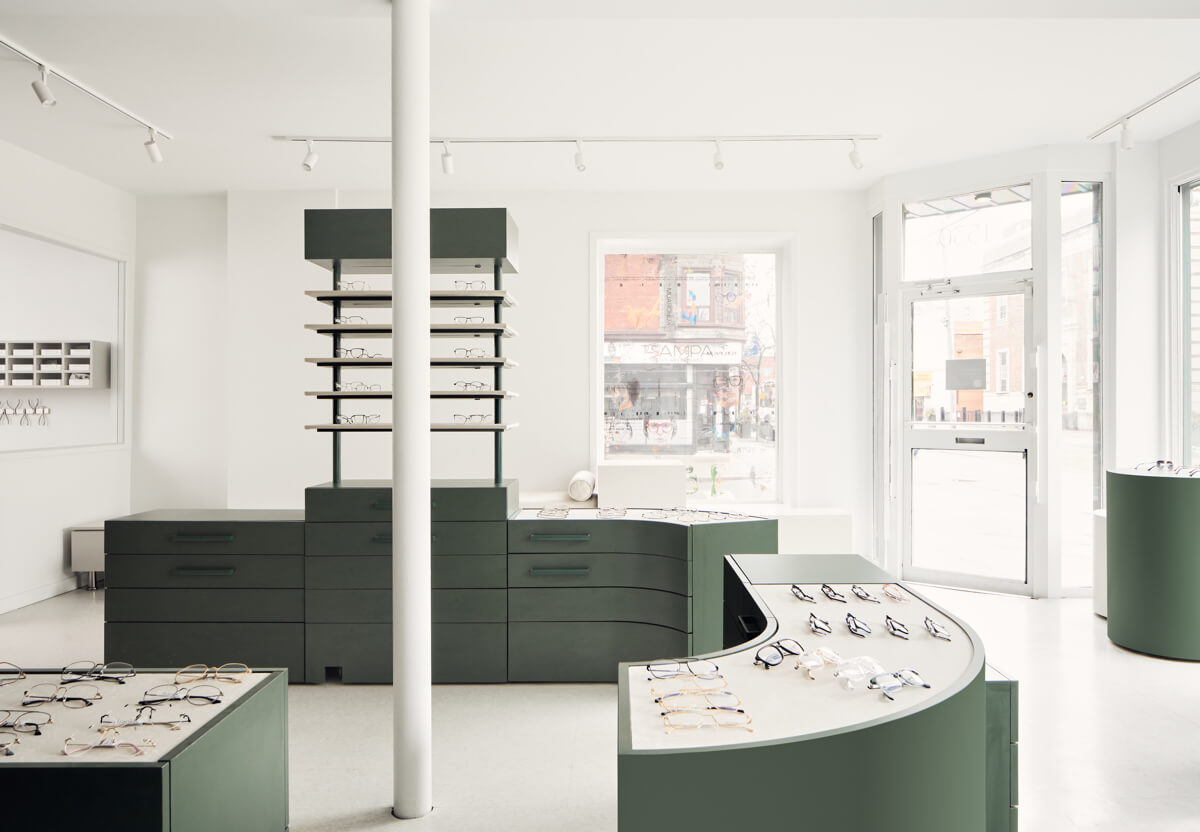 As a result, a majority of the project budget was dedicated to a series of 13 custom seating, display and storage modules on lockable castors. To coordinate with Frankly’s branding, many of these elements are splashed in a rich hunter green laminate provided by Italy’s Arpa. “Finding the right colour of green was very important, but so was the feel,” says Hanna. “Instead of being plasticky, this one has an almost buttery quality to it that adds a level of warmth. And it hides fingerprints.” 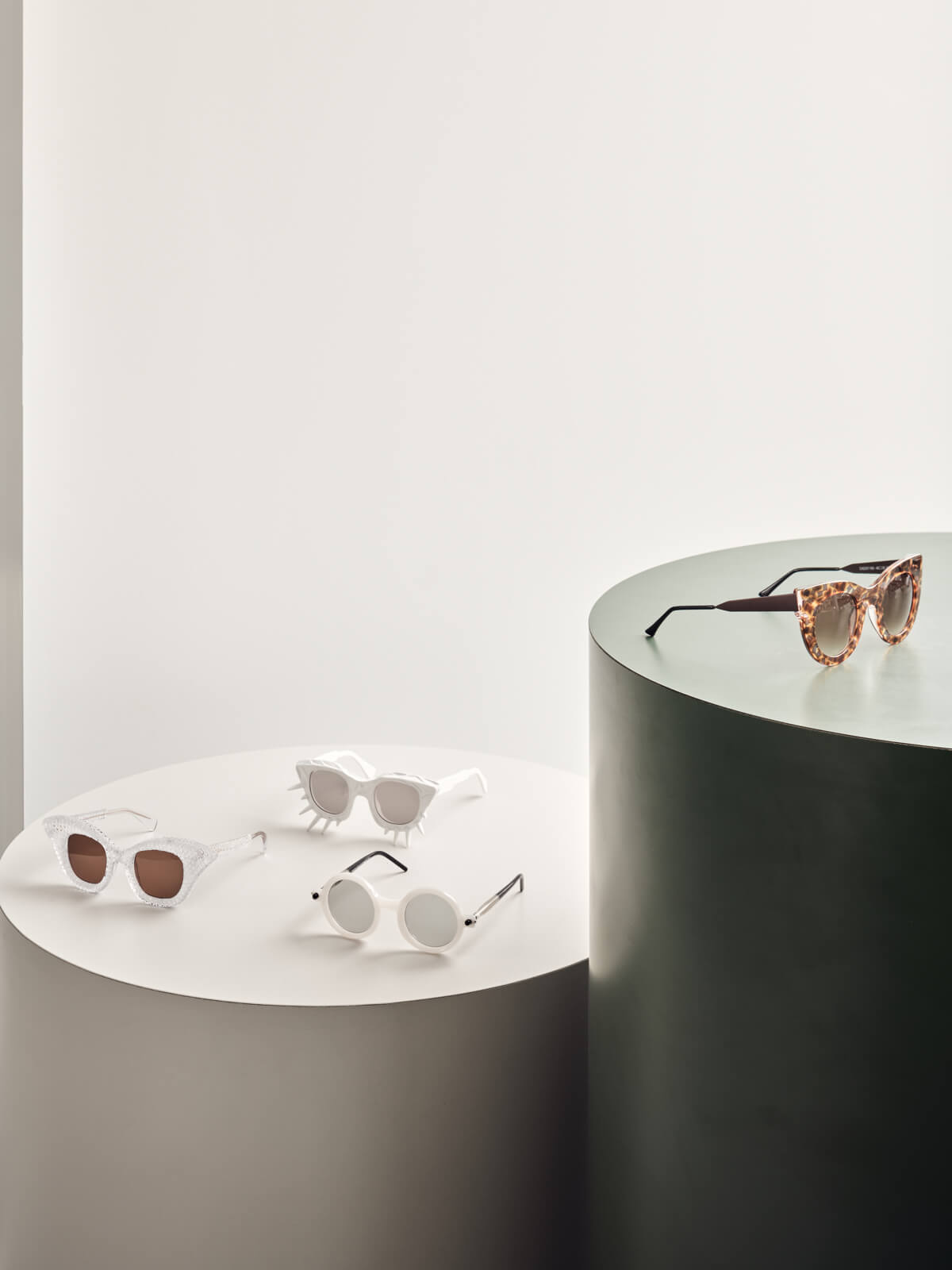 Modular fixtures were central to the overall scheme, including these custom plinths along the windows, which offer a place to sit, exhibit product or consult with an optician. 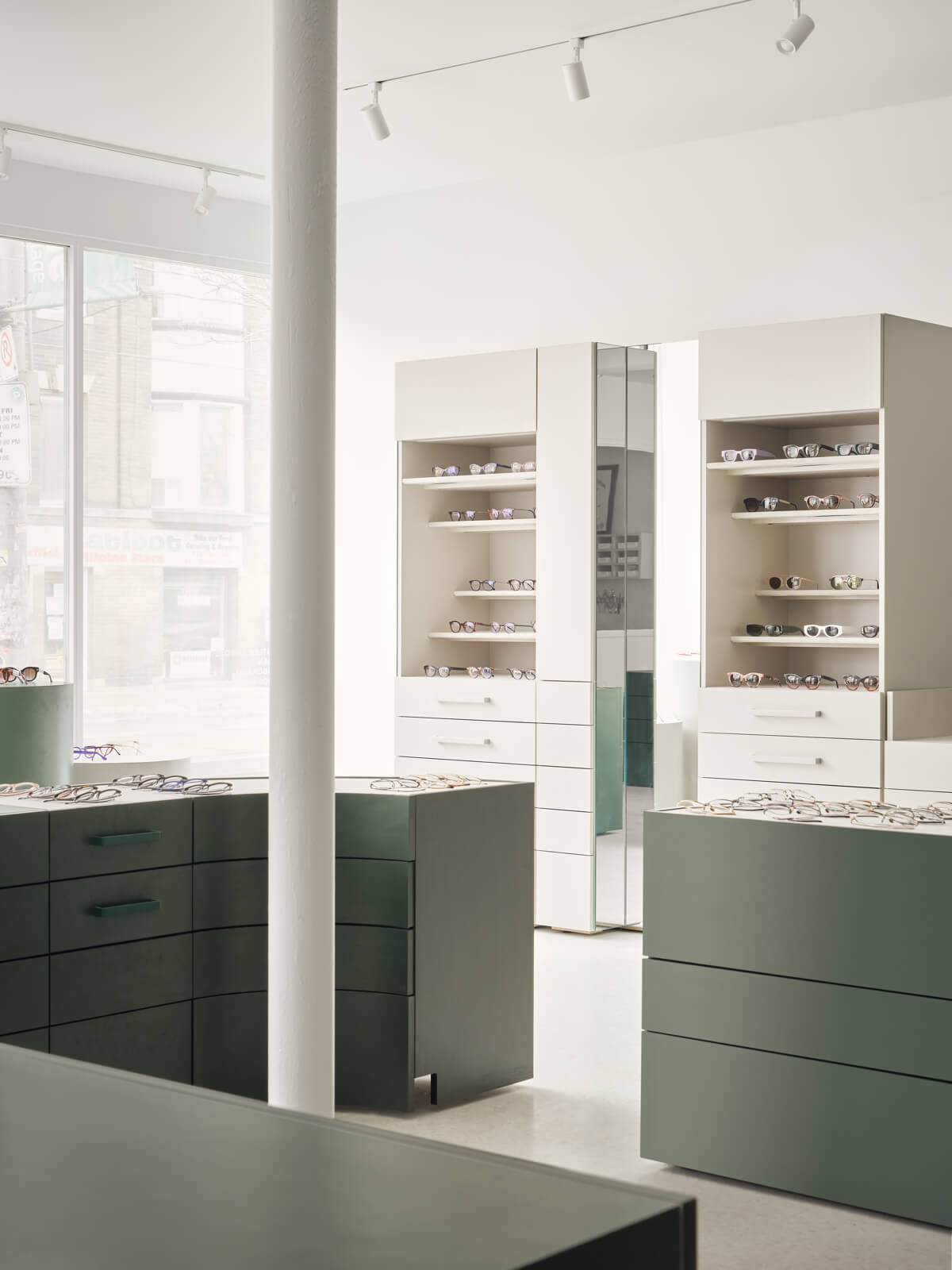 Contributing to this sense of tactility, the display tables are lined, jewellery box-like, in soft velvet, which is also used for the dark green drapery that sections off the back-of-shop admin area. 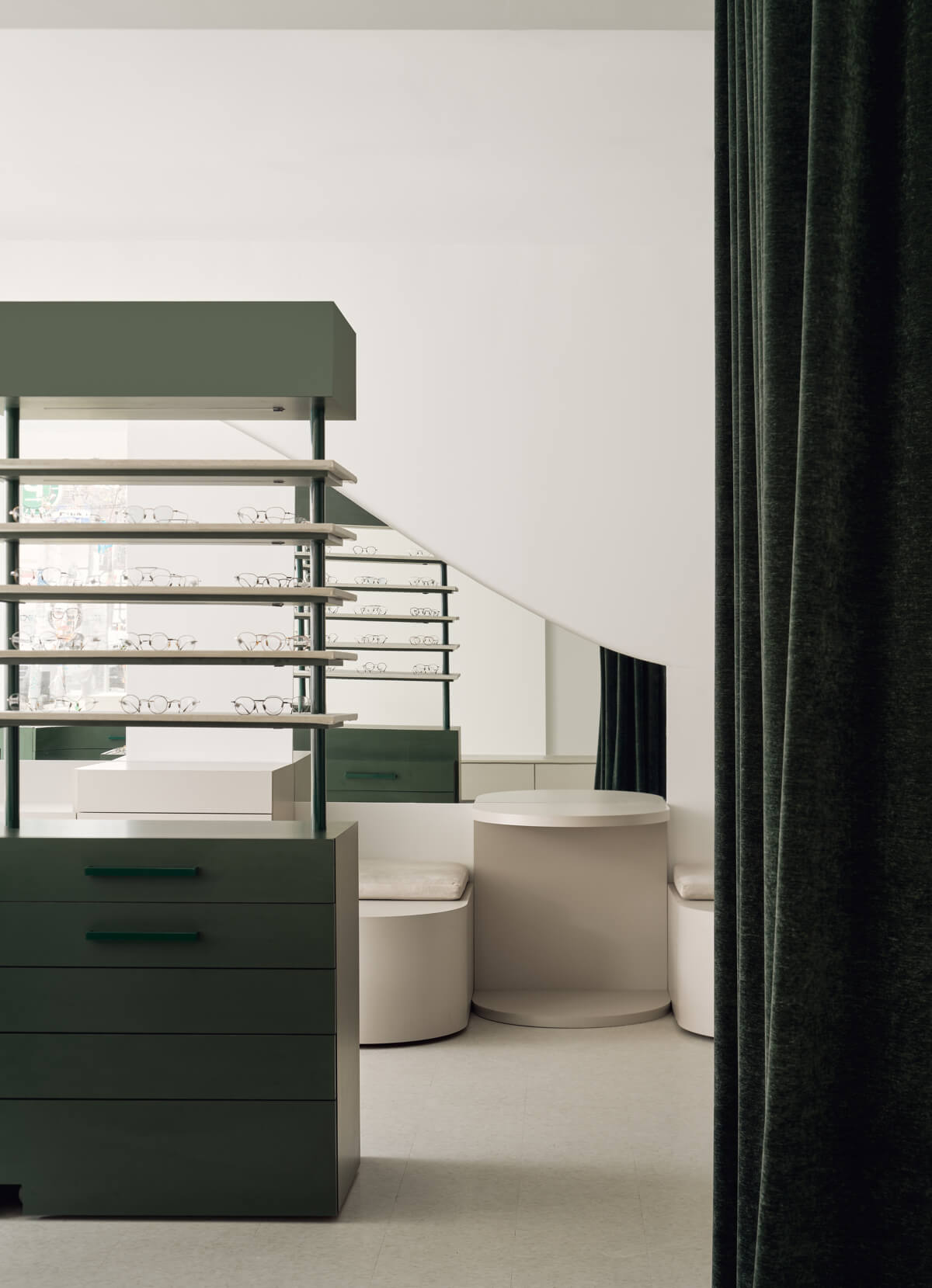 For eyewear retailer Frankly’s Parkdale location, Vancouver studio &Daughters crafted a muted, refined and versatile interior that can be entirely wheeled out or reconfigured as required.

Curves became another way to imbue personality into the 130-square-metre space. Echoing the arched bridge on a bold pair of spectacles, two crescent-shaped display modules delineate a central zone perfect for consultations. Against the neutral grey perimeter walls, a wavy mirror allows shoppers to catch a glimpse of themselves. “We wanted a mirror that’s not so in-your-face,” Hanna says, “and without it reflecting all of the surfaces in the space.” A second vertical mirror installed in a slightly recessed nook creates the feeling of an intimate pseudo–change room where customers can adjust to daring new looks with privacy. After all, as Frankly proves, it’s important to stay open to
a little change.